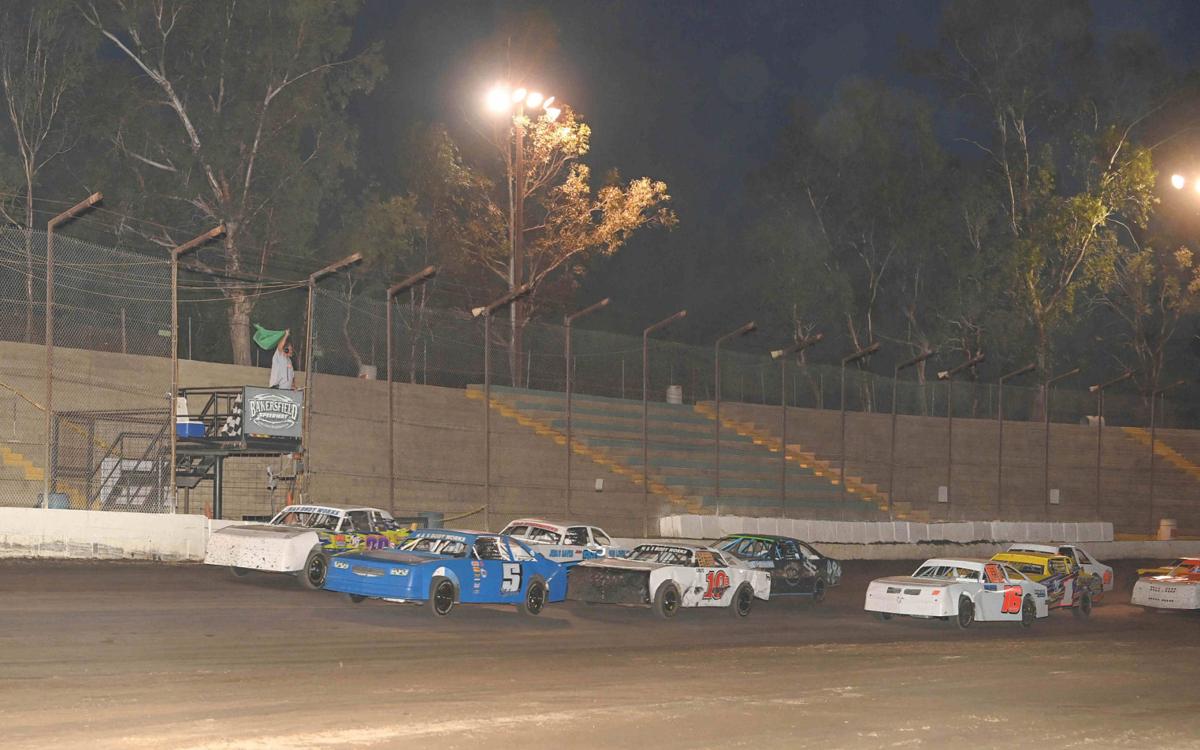 The green flag waves as a hobby stocks race begins, minus fans, at Bakersfield Speedway on Saturday. 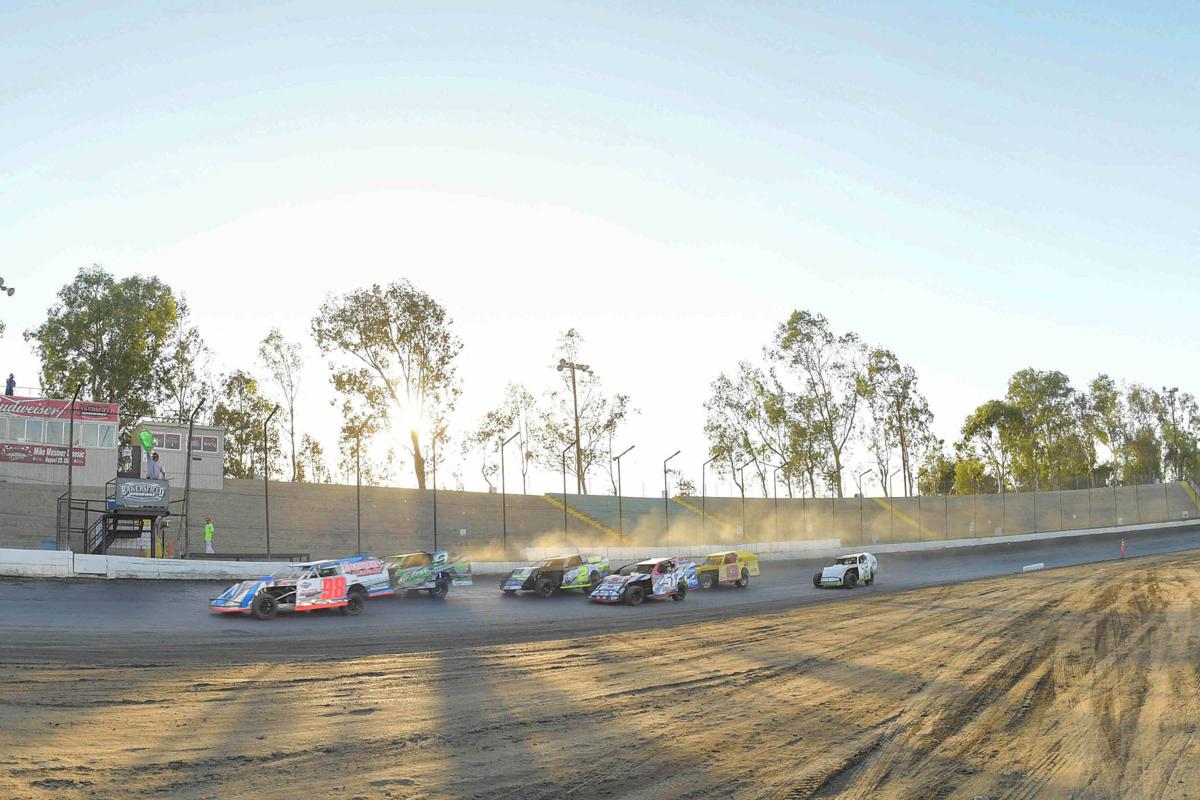 A race gets underway with the sun still shining at Bakersfield Speedway on Saturday, which ran races without fans. 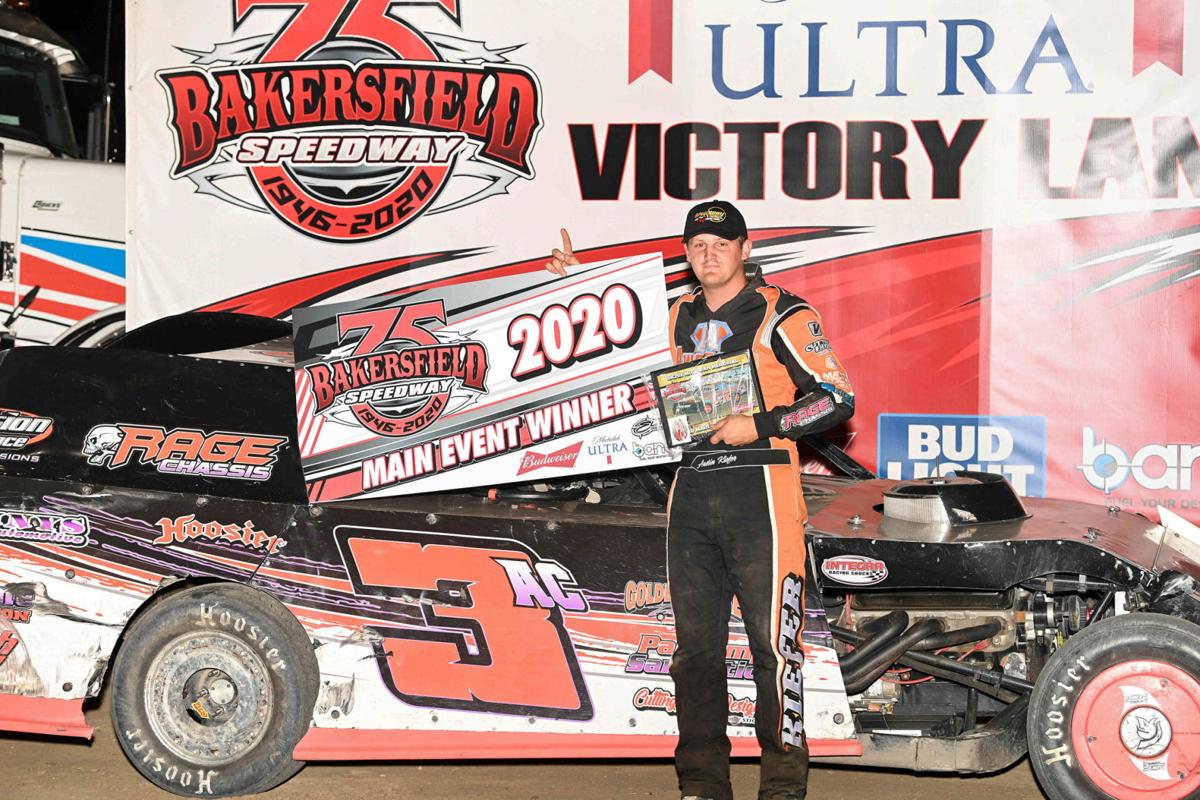 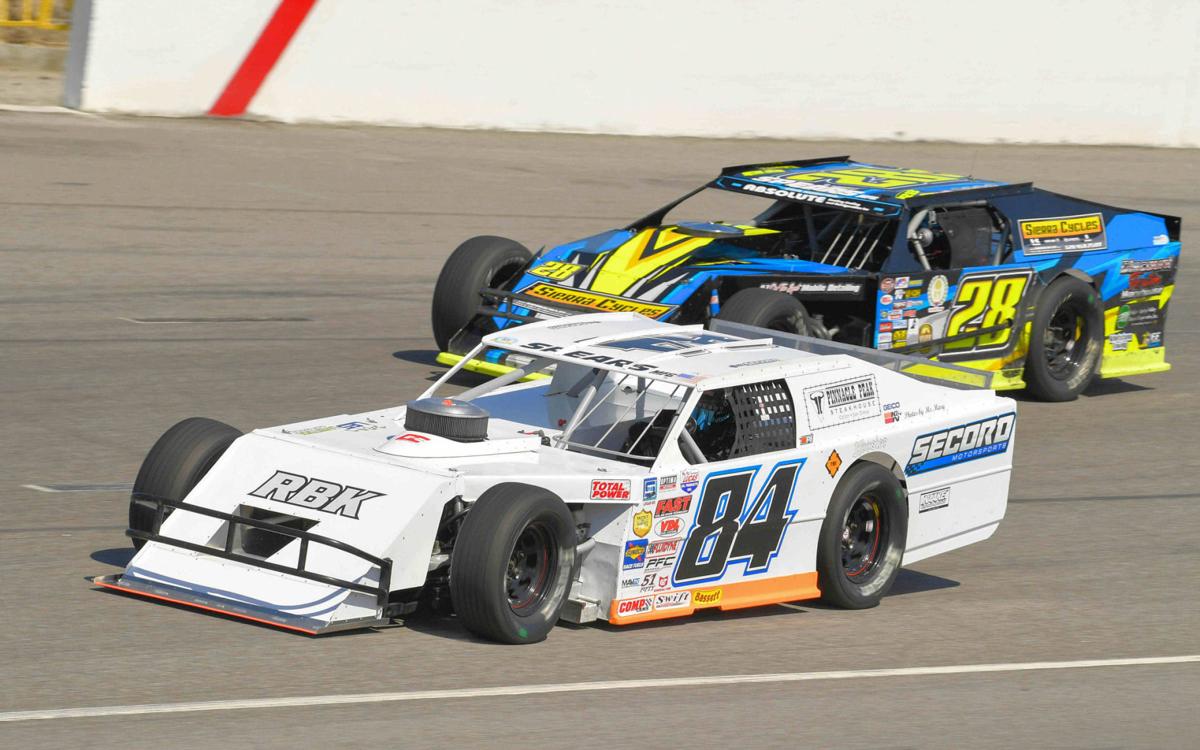 Racing action returned to Bakersfield Speedway on Saturday minus fans. 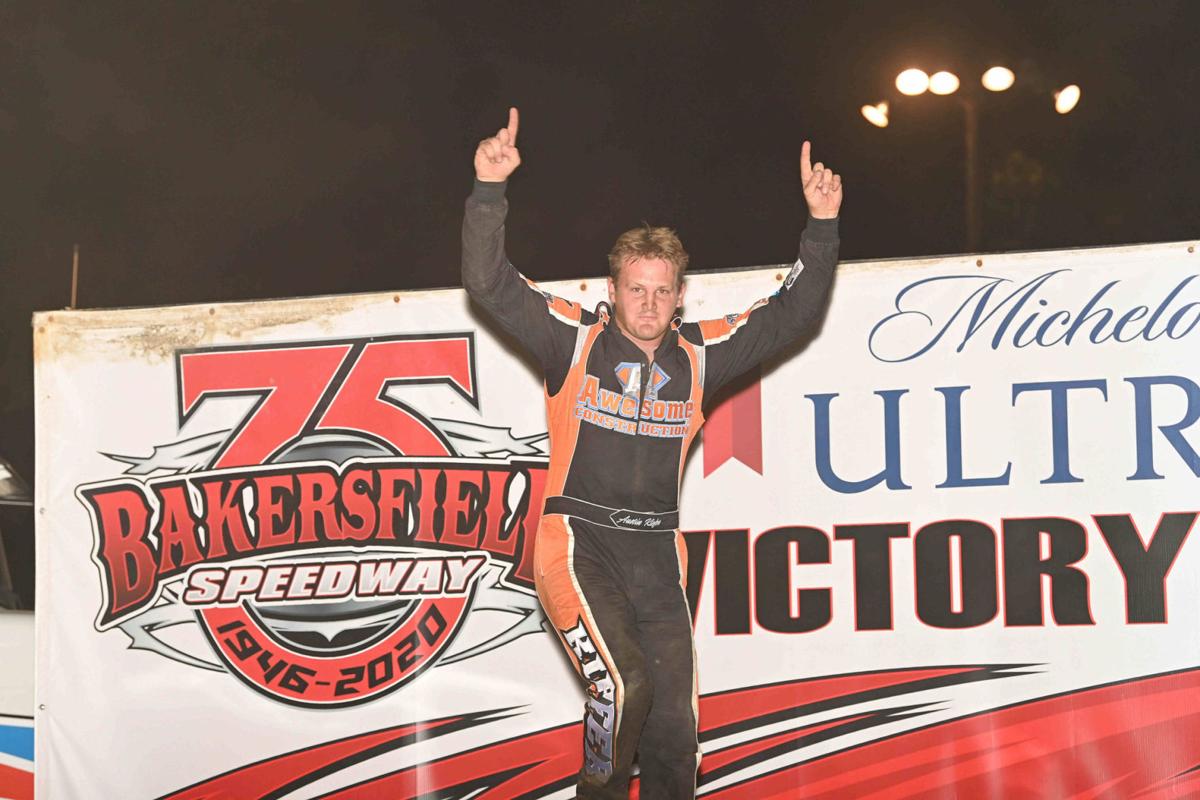 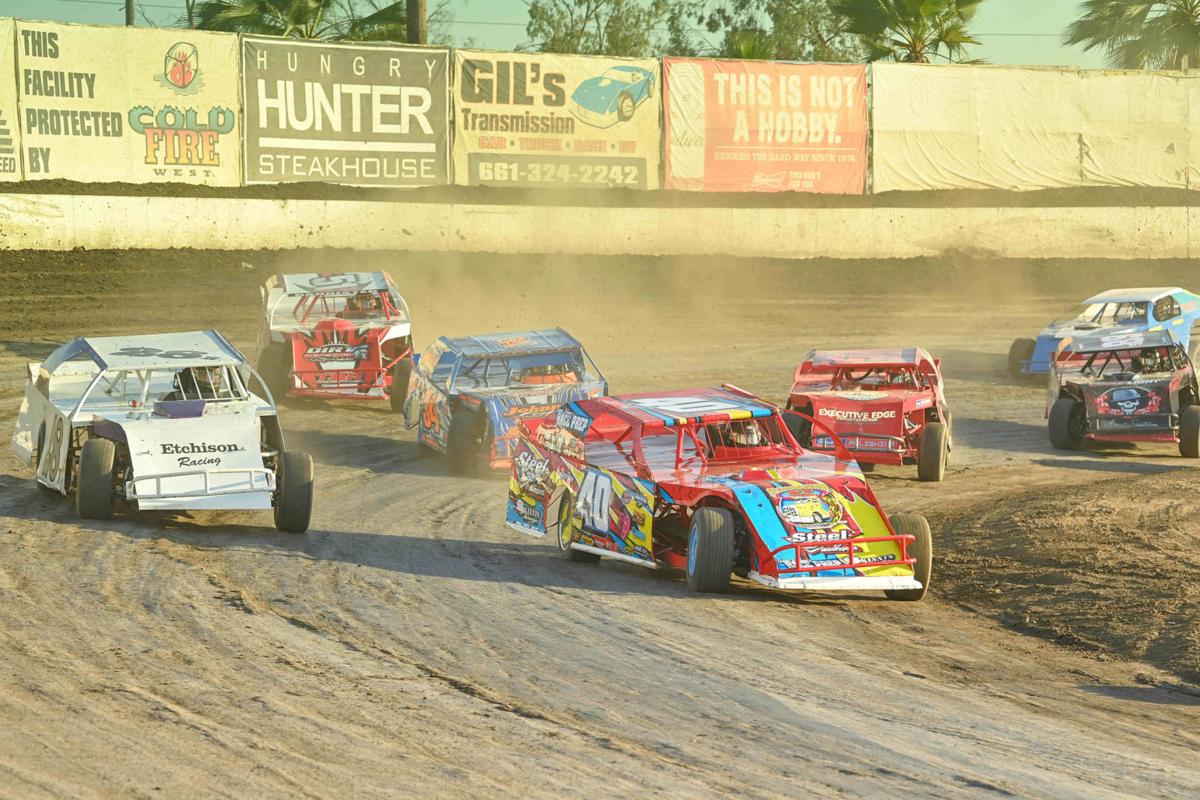 Drivers race on the dirt track of a crowd-less Bakersfield Speedway on Saturday. 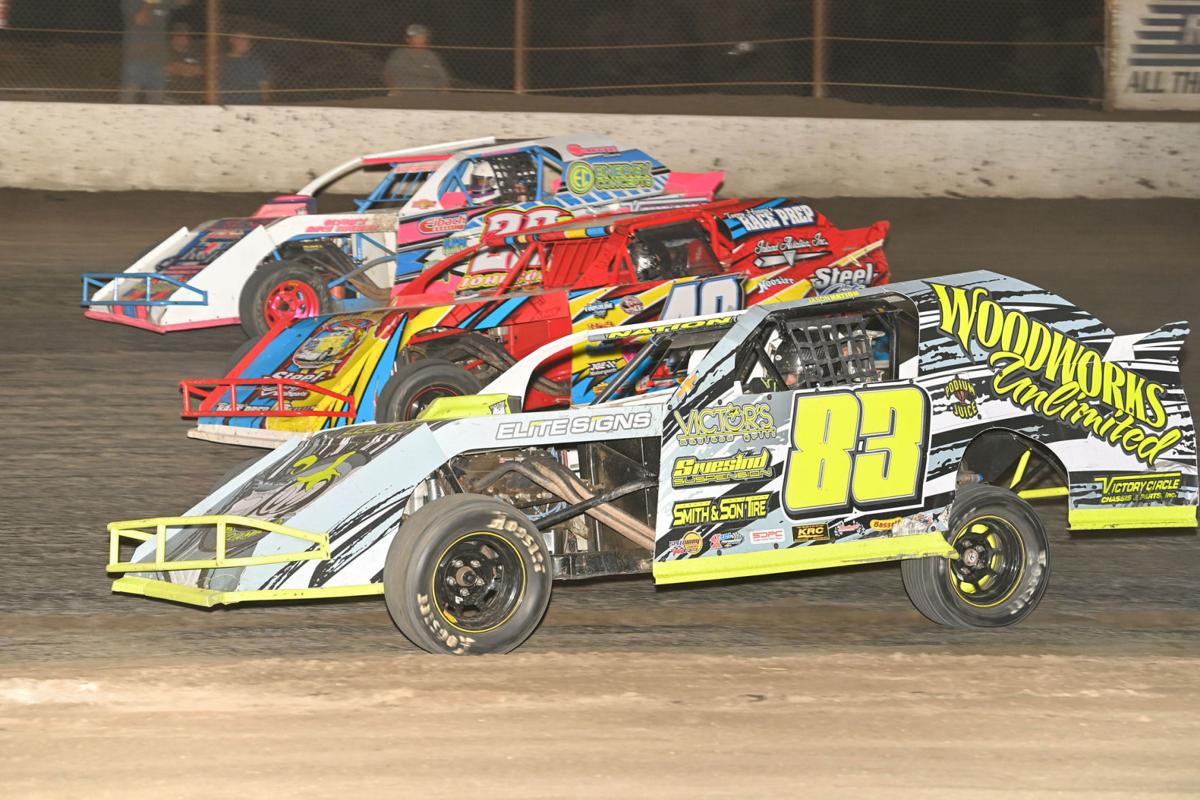 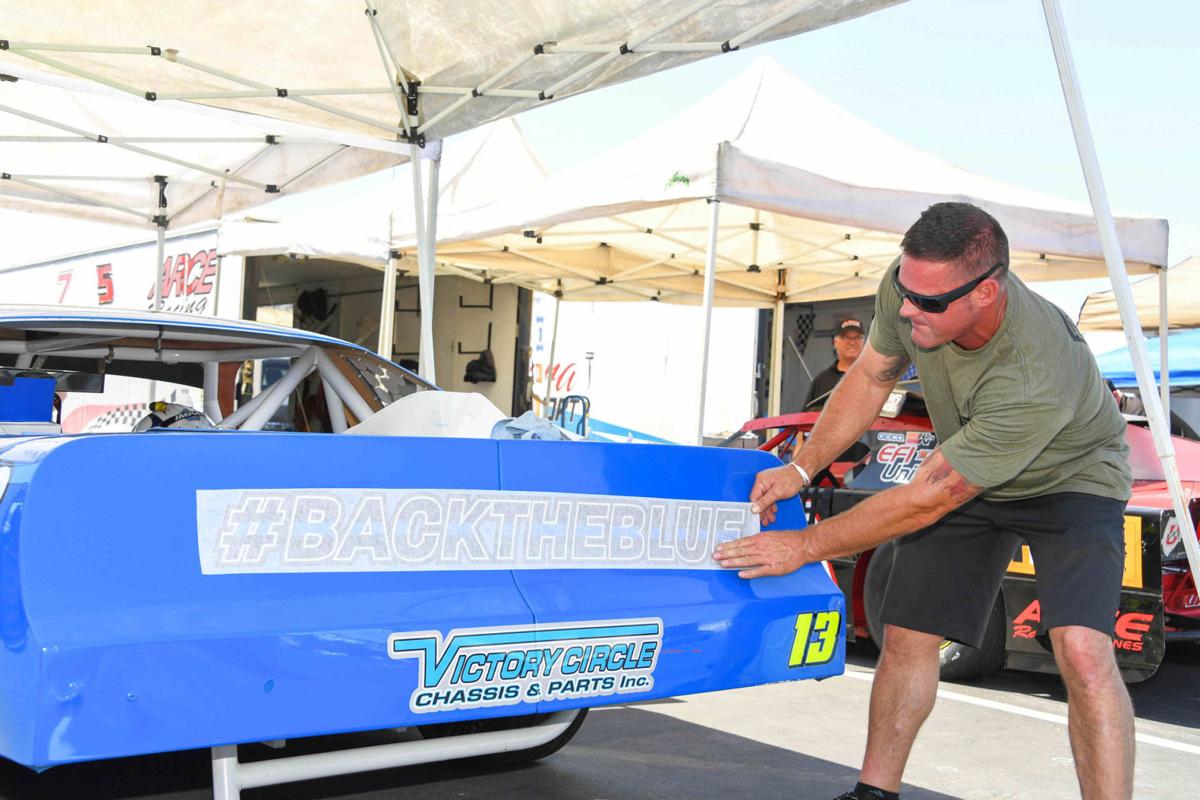 A decal is applied on a car prior to racing on Saturday at Bakersfield Speedway.

The green flag waves as a hobby stocks race begins, minus fans, at Bakersfield Speedway on Saturday.

A race gets underway with the sun still shining at Bakersfield Speedway on Saturday, which ran races without fans.

Racing action returned to Bakersfield Speedway on Saturday minus fans.

Drivers race on the dirt track of a crowd-less Bakersfield Speedway on Saturday.

A decal is applied on a car prior to racing on Saturday at Bakersfield Speedway.

There was nothing normal about it, but for the first time this year engines were roaring at Auto Club Famoso Raceway, Bakersfield Speedway and Kern County Raceway on the same night.

The COVID-19 pandemic shut things down in March, just as the racing season was getting under way. Racers and track operators have been pretty much idling since then, waiting for the green light from state and local officials to get back to business.

That came last week: The tracks could run, but not sell spectator tickets.

The races at Bakersfield Speedway and KCRP on Saturday night would have been among their biggest of the year as the grandstands would have been packed with fans for the annual fireworks show. Instead, competitors raced with no one cheering them on and winners “celebrated” by themselves in quiet Victory Lane.

“It feels amazing to race at home,” said Robby Sawyer, who later went on to finish second in the IMCA Modified race at Bakersfield Speedway. “It’s better than driving 12 to 28 hours like we’ve been doing (to compete out of state). I just want to race. It feels good to be here.”

Bakersfield Speedway owner Scott Schweitzer said he is just trying to make the best out of a situation that remains murky.

“We got everything ready to go, talked to sponsors and had everything set for the new year,” he said. “We raced one race and had to shut it all down. We were really excited about the 75th year, had some good things planned and we were just sitting there crossing events off as we were canceling them.

“We’ve already lost half the racing season. We’ll take anything we can get at this point.”

“I can’t cry the blues because many, many businesses have been affected in a big way,” Collins said. "We’ve just done what we could to, pardon the pun, to keep the wheels turning.”

In addition to his duties at KCRP, Collins also owns two touring series: The Spears Southwest Tour and the Spears Modified Tour.

“We were lucky enough with both the touring series, we got a big race in at Irwindale early in the year then we had one event with no crowd (at KCRP) but at least we got it in, got the teams to the track,” he said. "With the touring divisions you have people who work full time on the teams and their income and livelihood is based on those teams going to the race track.”

KCRP usually goes dark in July and August and despite losing races Collins said the track will likely stick with the schedule and not return to racing until September.

“It’s a tough decision," he said. “Bringing the competitors to the track and paying the overhead, even if we minimized the purse, in most cases it’s still hard to really generate the revenue you need to keep things going. It is important to keep it going. There is a value there. But we think we’ll stick with the two months off and fire back up in September.”

Back at Bakersfield Speedway, Schweitzer has not formulated a plan for the rest of the season.

“For this race, the Richie McGowan Memorial, I knew I’d get a good support of cars (there were just under 100 cars) and I got sponsorship dollars from MMI, and Golden Empire Towing,” he said. “That was the main factor. I know I can’t make it happen without sponsors on a regular Saturday night. That was the key factor here.

“There is no way I can race every Saturday night without fans.”

Both Schweitzer and Collins said they need fans in the stands to make it financially and both are willing to operate at reduced capacity and under social distancing guidelines if allowed. KCRP seats 5,000 and the Speedway seats 3,200.

At Auto Club Famoso Raceway, Vice-President Blake Bowser is in a bit of a different situation. He’s looking to reschedule lost events and make up for lost time with a variety of sportsman events, which generally do not draw spectators anyway.

“I cannot believe we pulled that race off,” Bowser said. “It’s make or break for us for the year. That’s our Daytona 500, our Indy 500, our US Nationals and we bank on that thing to be a good race to help us supplement other races that don’t make a lot of money and also to make improvements out here.”

When given the OK to open for racing again, Bowser quickly put together a test and tune session for last Friday night, allowing up to three people per car.

It was a huge success (sold out) and there were a wide variety of street and pure racing cars making passes down the track.

“People are just ready to come out and do something to break up the monotony,” he said.

Famoso usually shuts down for July and most of August but Bowser is in the process of reworking the schedule to make up for lost events.

“We’re going to shove in what we can now all summer long,” he said.

There were four divisions in action at Bakersfield Speedway with Austin Kiefer coming away with the IMCA Modified victory. Michael Johnson won in Sport Mods, Cody Johnson won the Hobby stock race and Rich Denman was the winner in American Stocks.