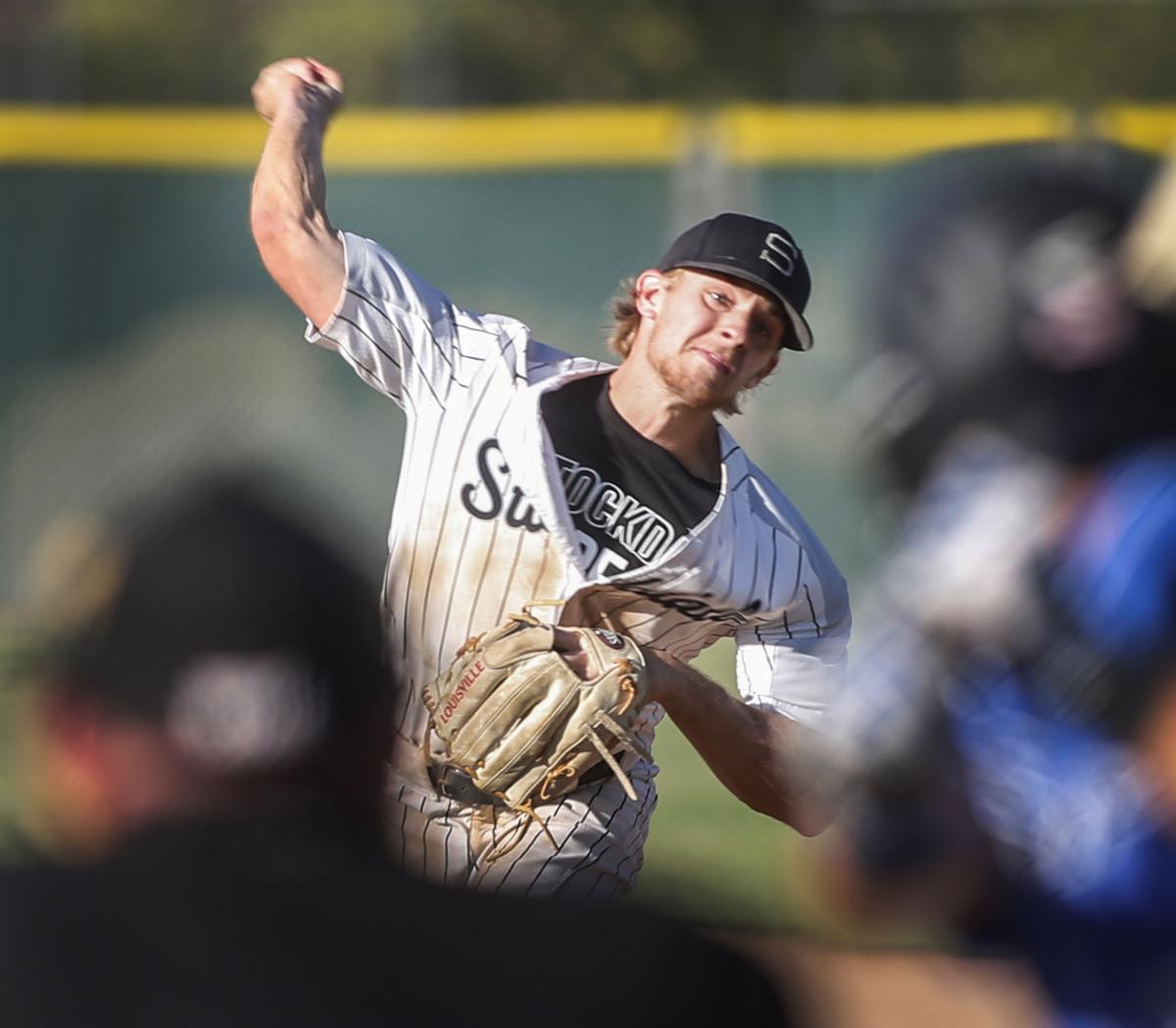 Stockdale graduate Sean Mullen, now a sophomore at UCLA, was selected in the 11th round of the 2021 MLB draft by the Tampa Bay Rays on Tuesday. 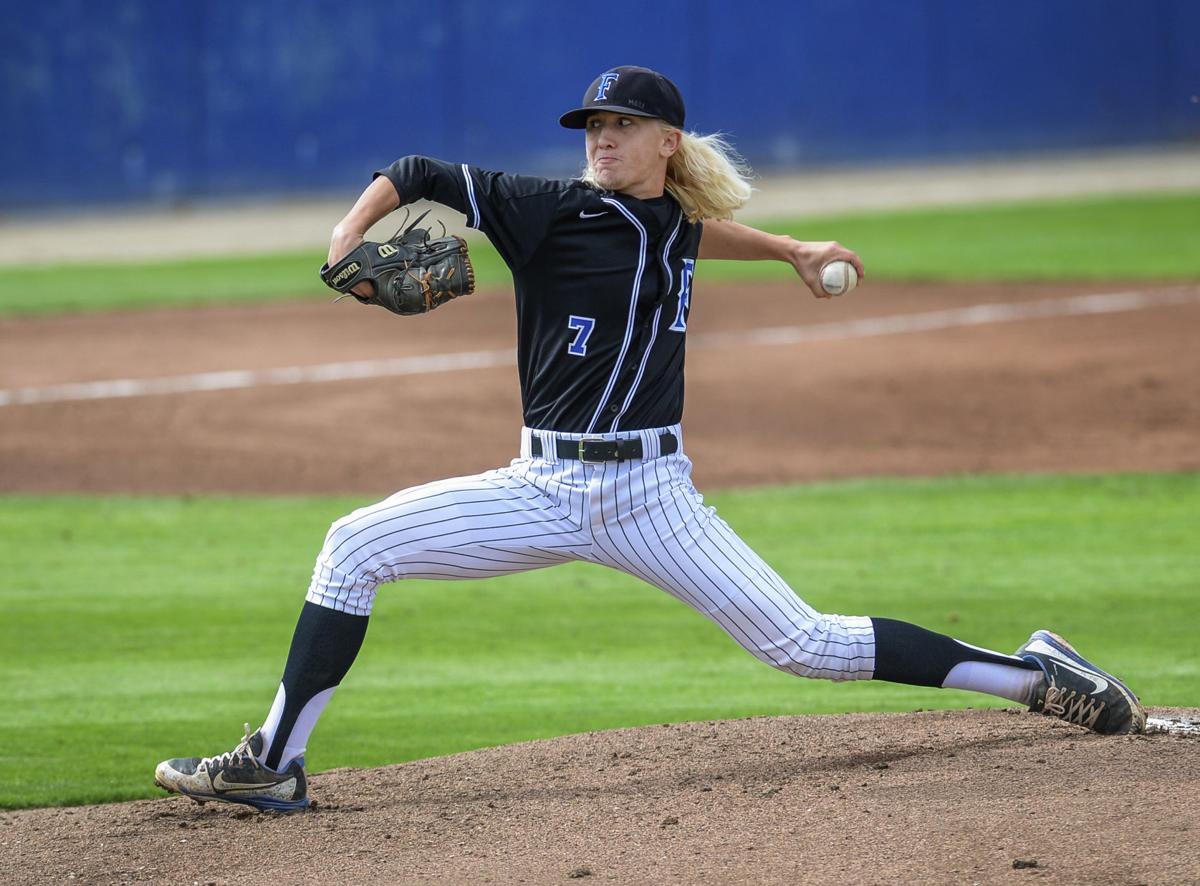 Former Frontier pitcher Kris Anglin, who played at Howard College in Texas this season, was selected in the 16th round of the 2021 MLB Draft by the Atlanta Braves on Tuesday. 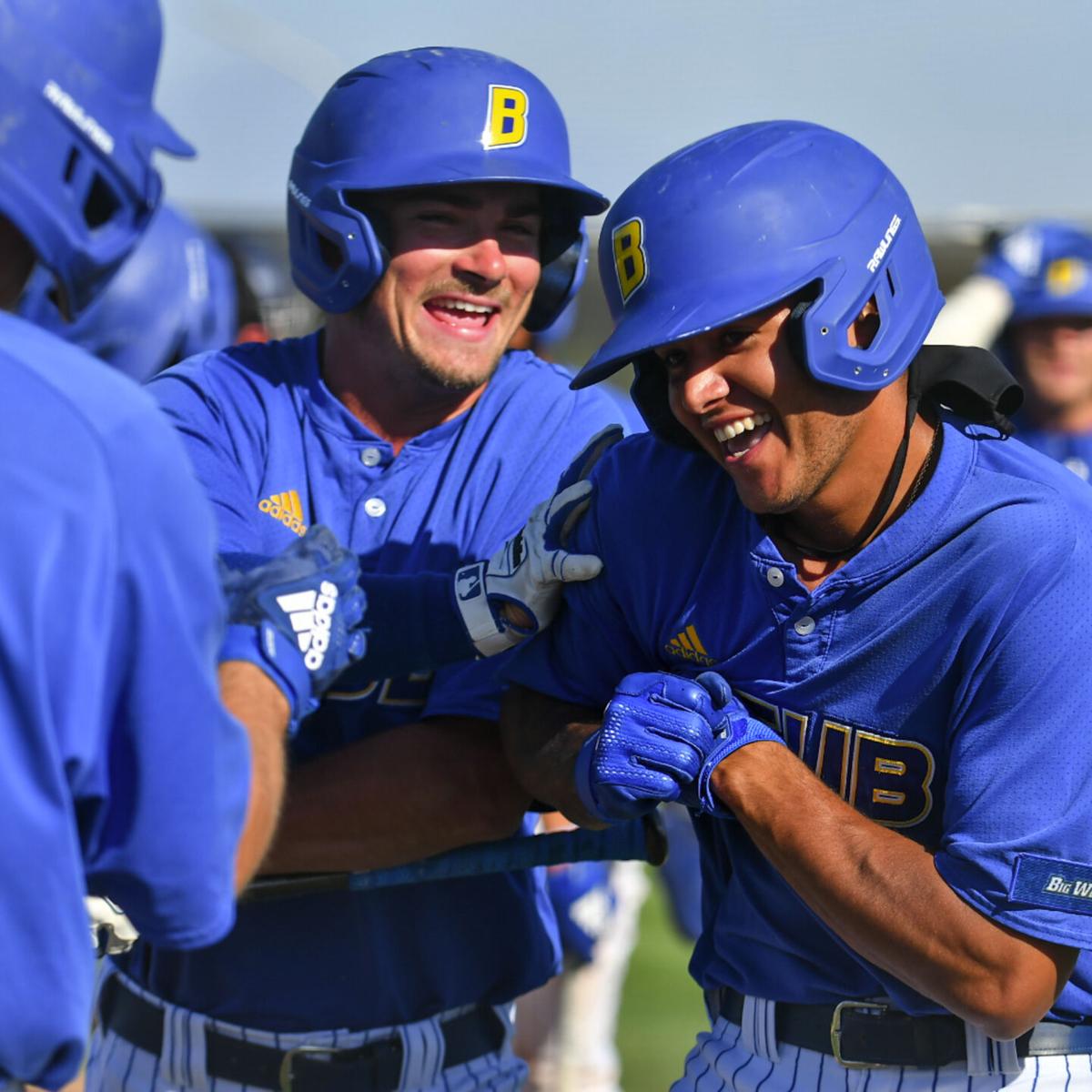 Jacen Roberson, right, is mobbed by teammates after a grand slam against UC Davis. It was part of a huge day for Roberson, who became the first Roadrunner to ever hit for the cycle. Roberson was selected in the 16th round of Tuesday's MLB Draft by the Arizona Diamondbacks.

Stockdale graduate Sean Mullen, now a sophomore at UCLA, was selected in the 11th round of the 2021 MLB draft by the Tampa Bay Rays on Tuesday.

Former Frontier pitcher Kris Anglin, who played at Howard College in Texas this season, was selected in the 16th round of the 2021 MLB Draft by the Atlanta Braves on Tuesday.

Jacen Roberson, right, is mobbed by teammates after a grand slam against UC Davis. It was part of a huge day for Roberson, who became the first Roadrunner to ever hit for the cycle. Roberson was selected in the 16th round of Tuesday's MLB Draft by the Arizona Diamondbacks.

Breakfast at the Mullen household had an extra special twist Tuesday morning.

It happened as local baseball prospect Sean Mullen was headed to the fridge for a bottled water. His father, also named Sean, was nearby cooking up an early-day meal.

Then the younger Mullen’s cell phone rang — and the resulting call stopped them both in their tracks.

It was UCLA baseball coach John Savage, calling to congratulate his standout pitcher. Sean Mullen Jr. had just been selected in the 11th round of the 2021 MLB Draft by the Tampa Bay Rays.

After taking another phone call from Mullen’s agent, father and son shared an emotionally hug, the culmination of years of hard work finally paying off for the former Stockdale star.

“It was a big relief,” said Mullen, who was 9-1 with a 3.39 ERA as a sophomore for the Bruins this season, and figured to be selected the day before when rounds 2-10 were unveiled. “Clearly, I was expecting to go earlier, but a lot of stuff behind the scenes kind of went down, and it happened in the 11th round and I’m lucky to be with the Tampa Bay Rays.”

Mullen was one of three local baseball standouts selected in the final day of the MLB Draft, which was just 20 rounds this season due to the COVID-19 pandemic. Typically 40 rounds, the draft featured just five rounds last season during the shutdown.

“It was a surreal feeling,” said Roberson, who celebrated with about 20 family members on Tuesday morning. “My agent called me and told me … and that was it. Everyone started screaming, my parents started screaming, even before they announced my name. And then finally about a minute or two later we heard it on the TV. It was a blessing for sure.”

Being drafted is nothing new for Roberson and Mullen, who were selected in the 2018 draft following their senior years in high school. Roberson went in the 24th round by the Los Angeles Dodgers, but opted to attend CSUB instead.

“We’re really excited for him,” said Jeremy Beard, CSUB head baseball coach. “It’s a tremendous opportunity … We feel very good that he has an excellent chance of being a Big Leaguer. He’s a five-tool kid that just needs more time.”

The left hand-hitting Roberson led the Roadrunners with .542 slugging percentage, seven home runs, 10 doubles and three triples. He also became the first player in CSUB history to hit for the cycle on March 10 and hit .282 with 34 RBIs for the season.

“It was a huge breakout year for him this year, even with the limited amount of time that he could work on his development (due to COVID-19),” Beard said. “He made huge strides this year coming from high school to where he is now. He is far better prepared to follow his dreams of being a Big Leaguer. He’s developed tremendously as a young man. He’s an amazing teammate. He’s a very loyal clubhouse guy. He gets big-picture things, he’s a very mature young man, who comes from a tremendous family, and he was able to sharpen his tools.”

Roberson is expected to travel to Arizona to sign and plans on playing rookie ball for the remainder of the season.

Anglin is also expected to sign, although he is committed to play at Texas Tech next year.

The left-handed pitcher was 7-0 with a 3.91 ERA in 66 ⅔ innings this season for Howard College (37-13), a national junior college located in Big Spring, Texas.

He had similar success in high school, displaying electric stuff despite limited action his senior year following the shutdown in 2020.

“In the four starts he had he just got better and better with each start,” said Frontier coach Brandon Boren of the abbreviated season due to the COVID-19 pandemic. “The thing that I was the most impressed with about him was he did a wonderful job of throwing his secondary pitches for strikes when he was behind in the count.”

Anglin showcased that in the Titans’ final game at Clovis North, which was ranked third in the state that season.

“We played a Friday night game and Kris threw a complete-game shutout,” Boren said. “But there was an inning where he walked a guy and then fell behind 2-0 to the next guy. And you could feel their dugout get excited and they thought they were going to get back into the game. And then he threw just a nasty 2-0 breaking ball for a strike that the guy took. And you could just see he was defeated.”

It was the type of performance that left little doubt in Boren’s mind that Anglin would be a pro pitcher someday.

“Nothing really bothers him or gets to him and a really high IQ guy,” Boren said. “I just think he’s a kid that’s built for pro baseball. He’s one of those kids that’s going to devote every waking minute to pitching and be really, really good.”

Mullen had his share of success at the high school level, as well. He finished off one of the more dominant high school careers is recent memory, tossing a 1-hitter with 12 strikeouts to lead Stockdale to a 6-0 victory over Clovis West in the section Division I title game in 2018.

“I’m super happy for him and his family,” said Stockdale coach Brad Showers, who has had Mullen’s father on his staff as an assistant the last several years. “All these years of working hard and trying to get better …”

He was 8-1 with a 1.30 ERA that season, and also hit .394 with seven home runs to earn his third straight BVarsity All-Area player of the year honor. In his last three years at Stockdale, the Mustangs were 71-17 overall and 40-5 in winning three straight Southwest Yosemite League championships and was drafted in the 35th round by the Colorado Rockies that same year, but decided to pass on the offer and enrolled at UCLA.

“He has a strong desire to win,” Showers said. “And he pitched with extreme confidence when he had the ball. And of course he had all the talent, but when you have all that talent and you have (that tenacity) to come right at batters, and Sean has that. It boils down to toughness and competitiveness.”

Now the 6-1, 205-pound right-hander is looking forward to his next challenge.

“I’m really fired up about being a Tampa Bay Ray,” said Mullen, who is planning to travel to Florida to sign his first professional contract in the next week or so. “It’s a first-class organization. They’re the best organization for developing pitchers in the game. And there’s a reason for the reputation they have, so I’m lucky that the Tampa Bay Rays got me when they did, and it all ended up working out really well for me.”