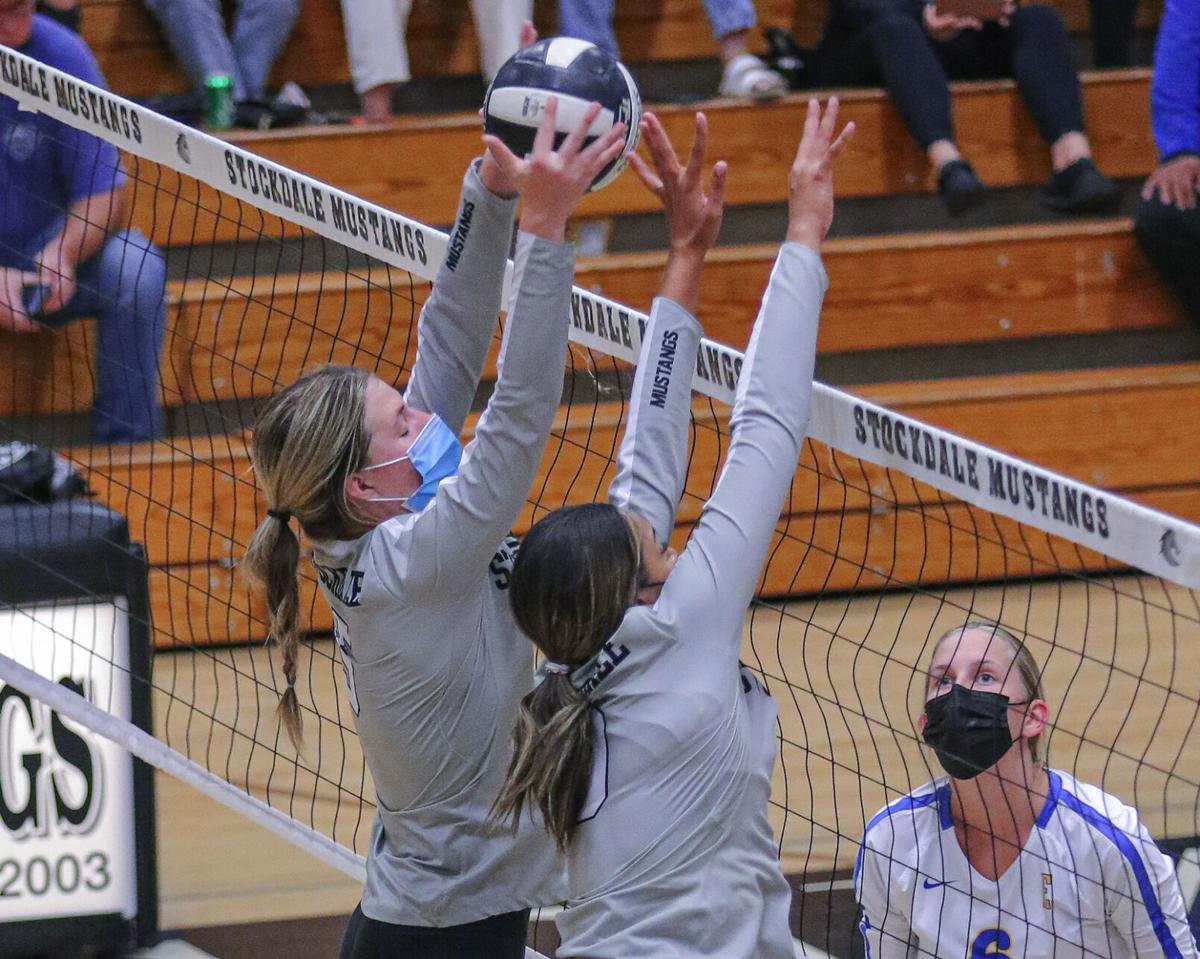 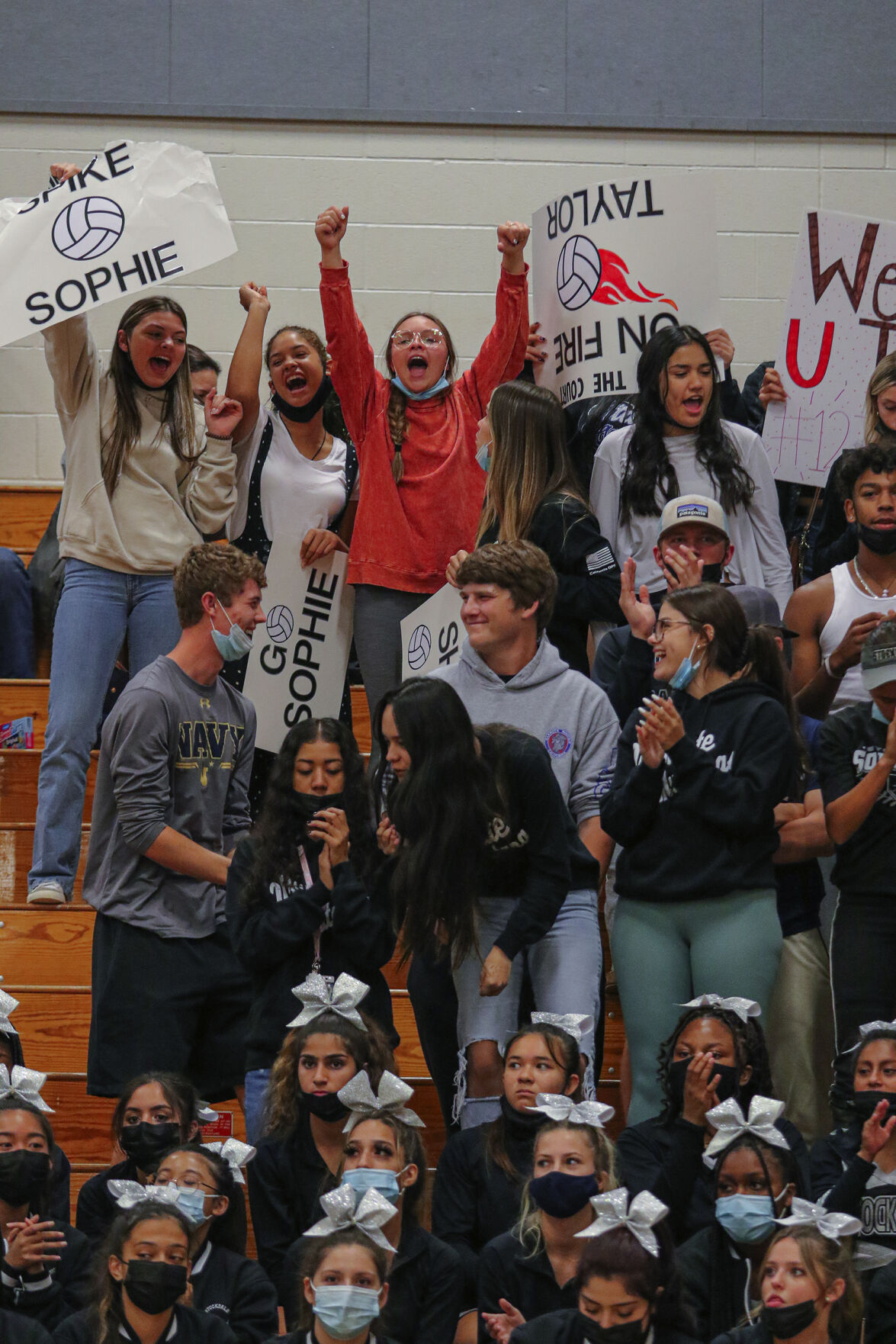 The Mustangs' student section celebrates a point earned by Stockdale during the Division II Valley Championship semifinals against Exeter. 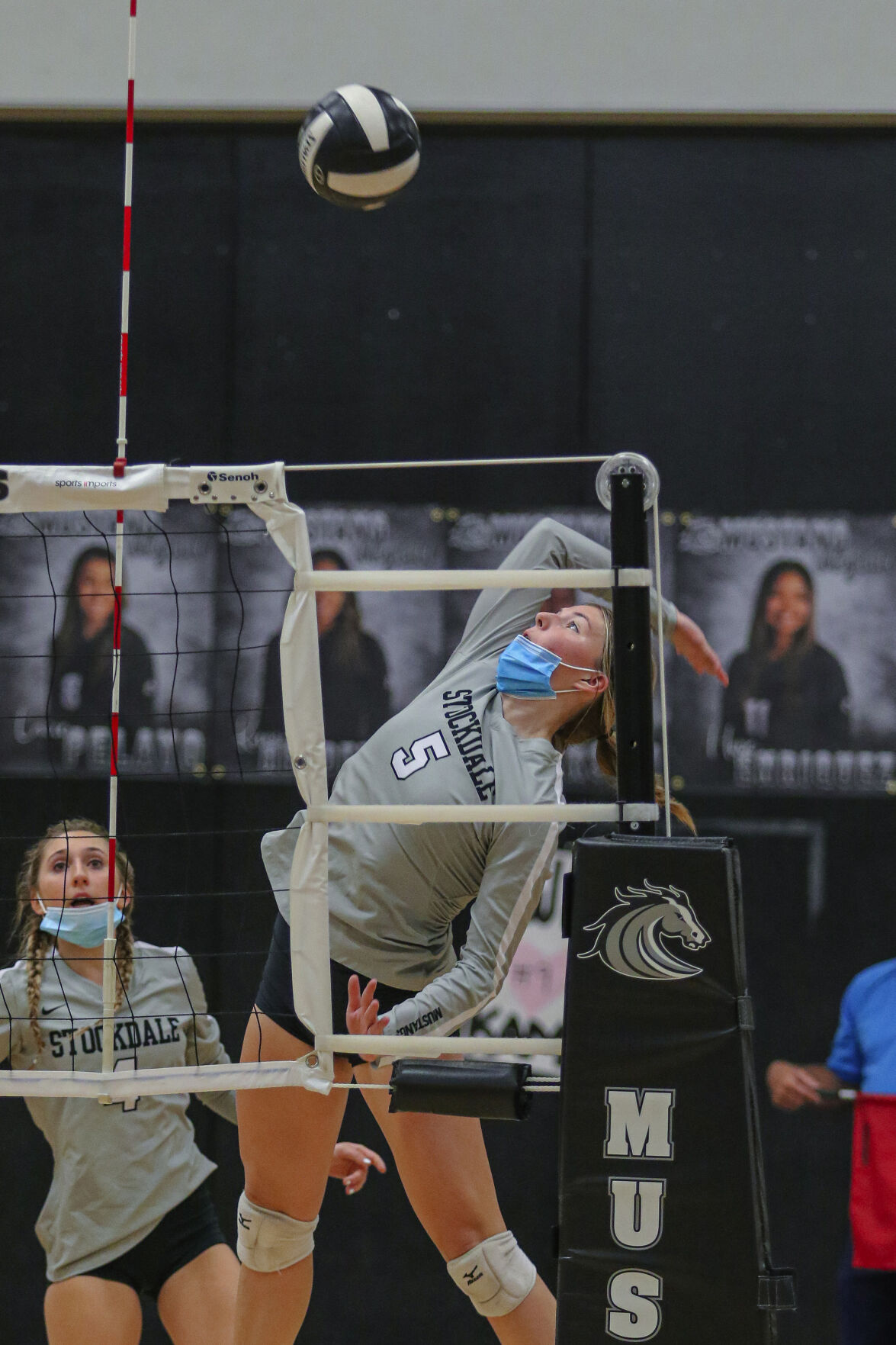 Stockdale's Morgan Cole goes for one of her 14 kills. 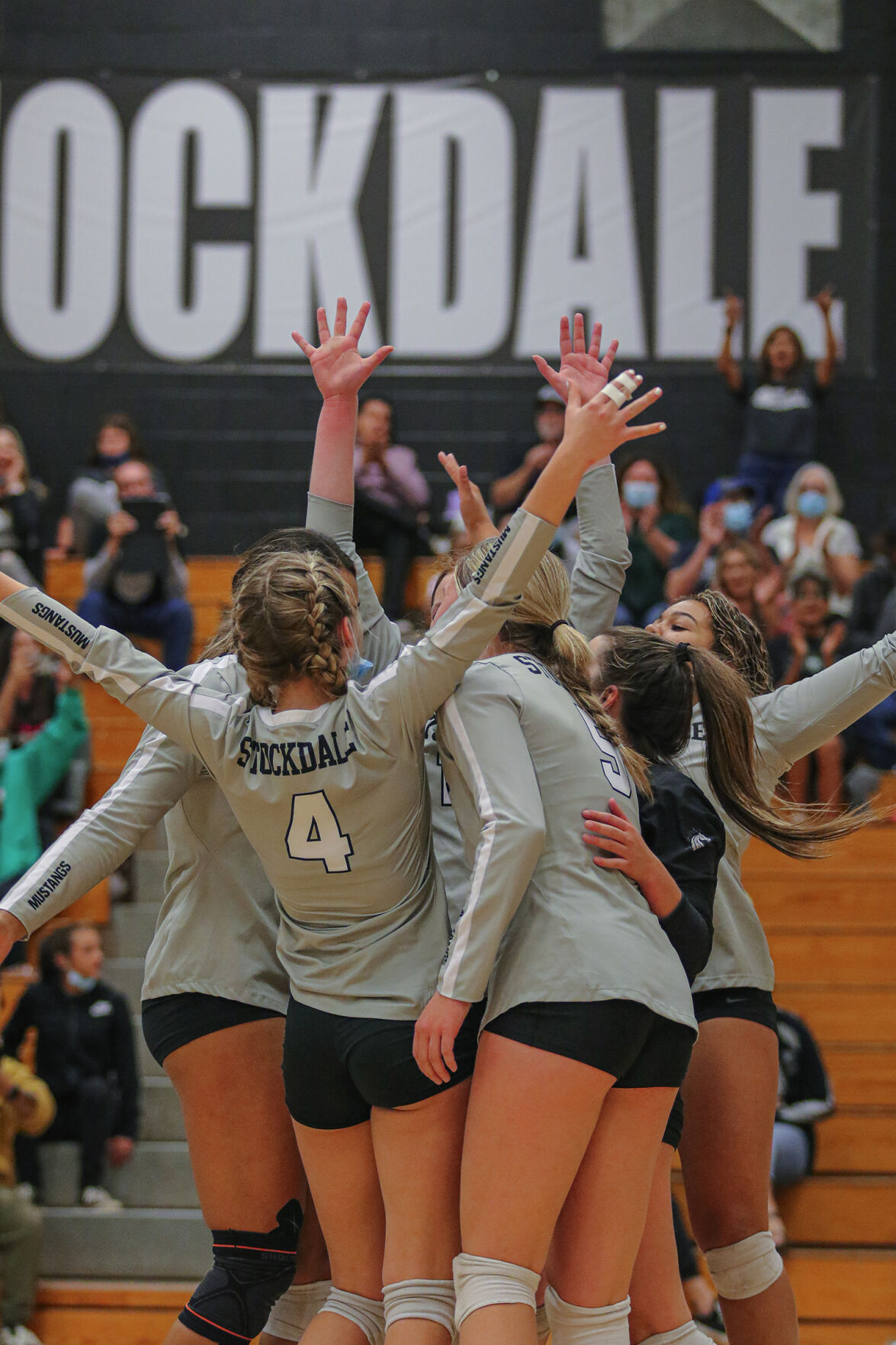 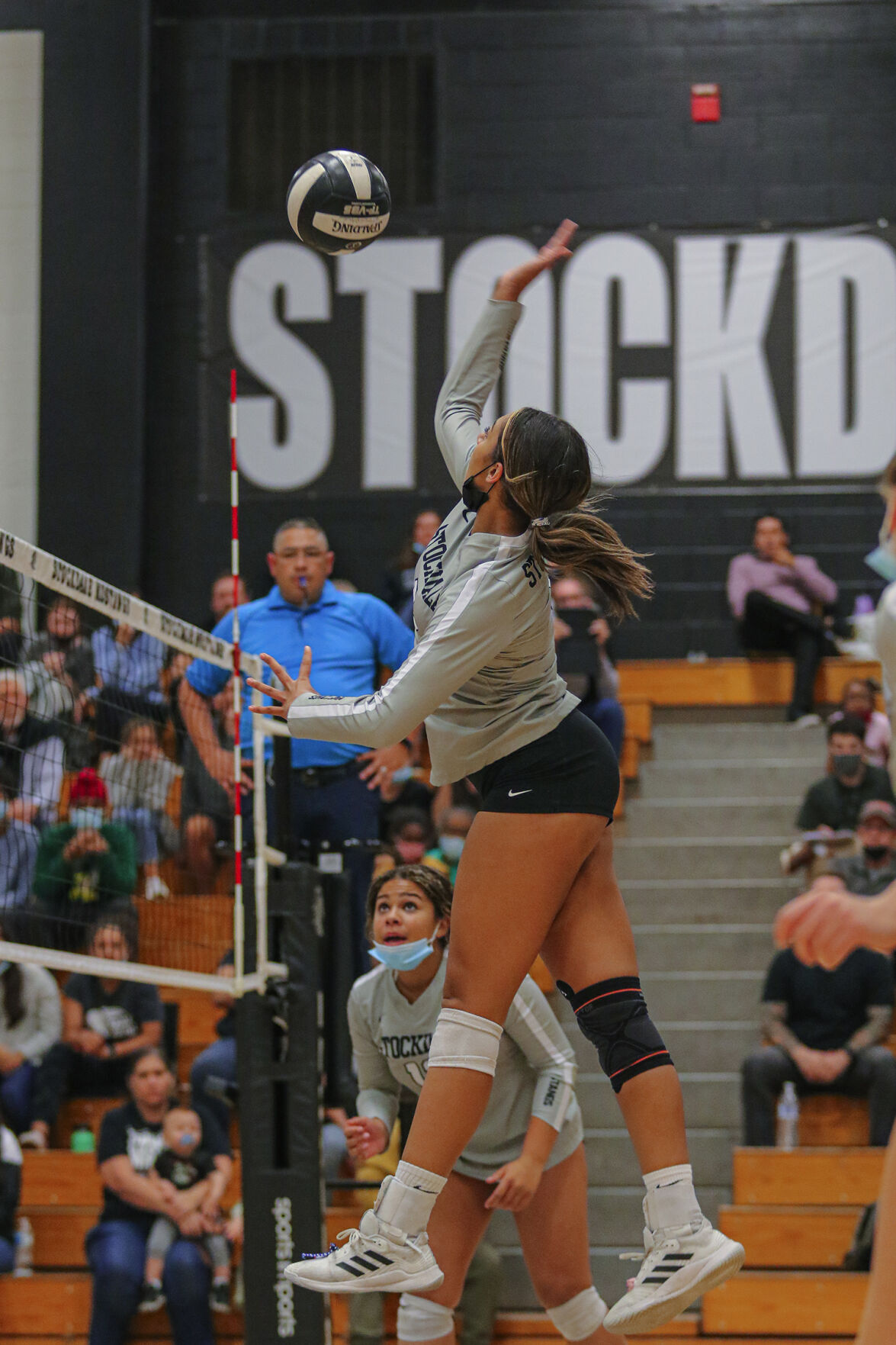 Senior Mustang Kamryn Henderson goes up for a kill. Henderson had 13 kills and led the Mustangs with four blocks.

The Mustangs' student section celebrates a point earned by Stockdale during the Division II Valley Championship semifinals against Exeter.

Stockdale's Morgan Cole goes for one of her 14 kills.

Senior Mustang Kamryn Henderson goes up for a kill. Henderson had 13 kills and led the Mustangs with four blocks.

The first set was a prolonged struggle for the Stockdale Mustangs. With Exeter's tight defense thwarting attack after attack from offensive stalwarts Morgan Cole and Kamryn Henderson, the Monarchs took leads of 9-3 and 15-8, and even after a lengthy comeback from Stockdale, Exeter claimed the set 27-25.

The rest of the semifinal game was completely different.

Both coaches said their young teams might have suffered from nerves, but the Mustangs recovered their composure very quickly to dominate the Monarchs in a 25-8 second set and 25-12 third set. They then held on to win the fourth 25-17 despite a flurry of errors, sealing a 3-1 victory and a trip to the Division II Central Section volleyball finals against Clovis East.

Stockdale's offense livened up down the stretch — three Mustangs finished with double-digit kills — but they broke through thanks to strong defense around the net. Henderson had four blocks, Cole had three and Bree Lewis had three more as the Mustangs repeatedly forced Exeter into uncomfortable defensive positions.

"I think maybe just being ahead a little bit and then anticipating (helped)," Stockdale coach Maria Collatz said, "and they just got up there and were very aggressive. It was awesome."

The first set was not awesome. Out of their 27 points, the victorious Monarchs had only eight bona fide kills. Most came on a diverse array of errors from the Mustangs. Cole recorded five attacking errors in the set. Viena Perier had an elegant ace to cut Exeter's lead to 12-8, but the Monarchs got three more points, forcing a timeout from Collatz.

Eventually, the Mustangs bridged the gap. Trailing 19-15, they got six points in a row, led by three kills from the sophomore outside hitter Schonauer and a pair of attacking errors from Exeter's Hannah Baker, who was erratic much of the night. But the teams went blow for blow up until 25-25, when Jayla Iversen and Baker got kills to win it for Exeter.

"I just don't think (we) came out and played like Stockdale can play," Collatz said. "And then they sat there and talked a little bit in between, and I went over to them and said, 'Adrenaline didn't work for us, so let's relax with the adrenaline, and let's make it work for us,' and then they just changed."

The change manifested quickly. Stockdale went on a pair of 9-1 runs in the second set. Exeter's offensive struggles mounted as they committed eight attacking errors while only recording two kills against a rejuvenated Mustangs defense. Henderson wrapped things up at 25-8 with an authoritative strike to the back corner that froze the Monarchs.

The third set was ostensibly closer but Stockdale held just as much control; Exeter never led. The Monarchs got as close as 5-4 before a defensive error, a block from Viena Perier and an ace from Abby Chester (who also had 14 digs) boosted the Mustangs' lead. Cole also found her stroke, recording five kills in the set.

Monarchs coach Samantha Hilvers had spent a timeout early in the second set but opted to let her team play through the third until the score got to 20-9. Exeter had some brief success after the timeout, with Iversen recording a pair of aces, but the Monarchs lost 25-12.

The fourth set was dicey with the Mustangs relapsing into the sloppy play that had cost them the first set. Exeter led 7-6 on an attacking error by Schonauer, but Stockdale went on yet another 9-1 run. However, this time they let the Monarchs come back. Bella Renteria, who was effective serving all night for Exeter, had a pair of aces. Down the stretch, bad setups led to attacking errors from Cole, Henderson and Perier. And the Monarchs made it back within two points at 19-17, threatening to somehow force a fifth set.

Once again, though, Stockdale returned to normal. Cole had two aces and Lewis scored an authoritative block as the Mustangs wrapped it up, 25-17.

Exeter is left hoping to qualify for regional playoffs.

"Definitely want them to just continue to grow in the game, and just (in terms of) maturity," Hilvers said. "We're a young team. I've got five underclassmen on the court, and predominantly only start two seniors, that's it. So we'll get there."

Collatz has a simple message to her Mustangs heading into the championship in Lemoore on Saturday, where they will face No. 7 Clovis East: "Let's do this."

"This year's just been so different," she said, "and to be here is just amazing, and they've worked very hard for it, so let's do this."