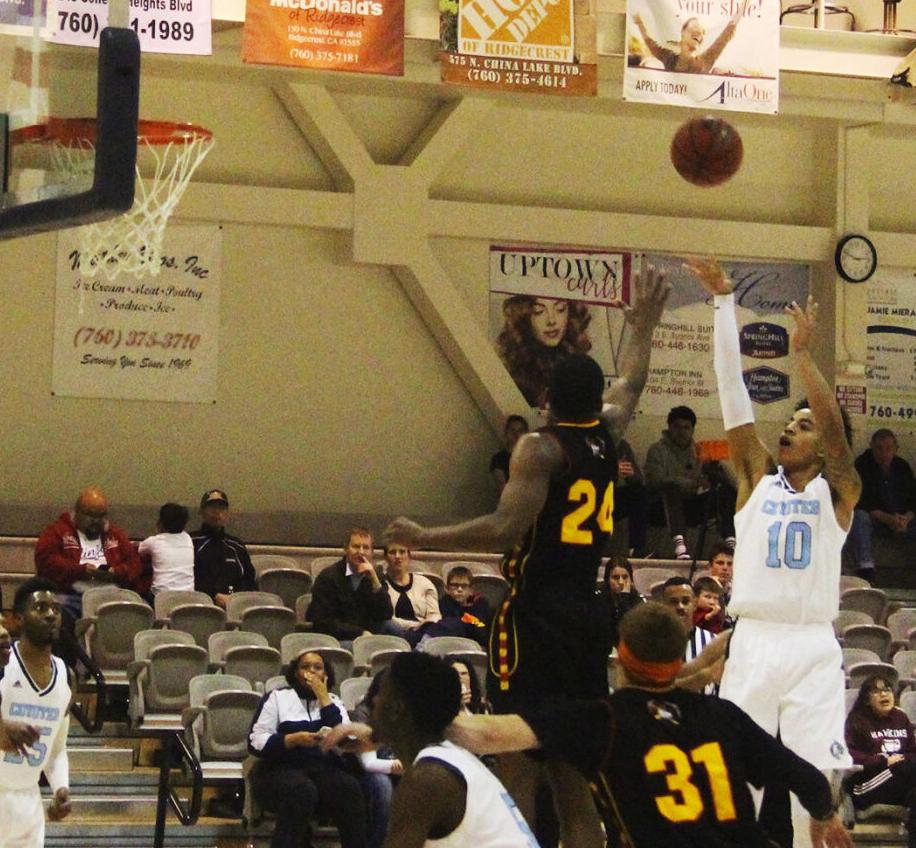 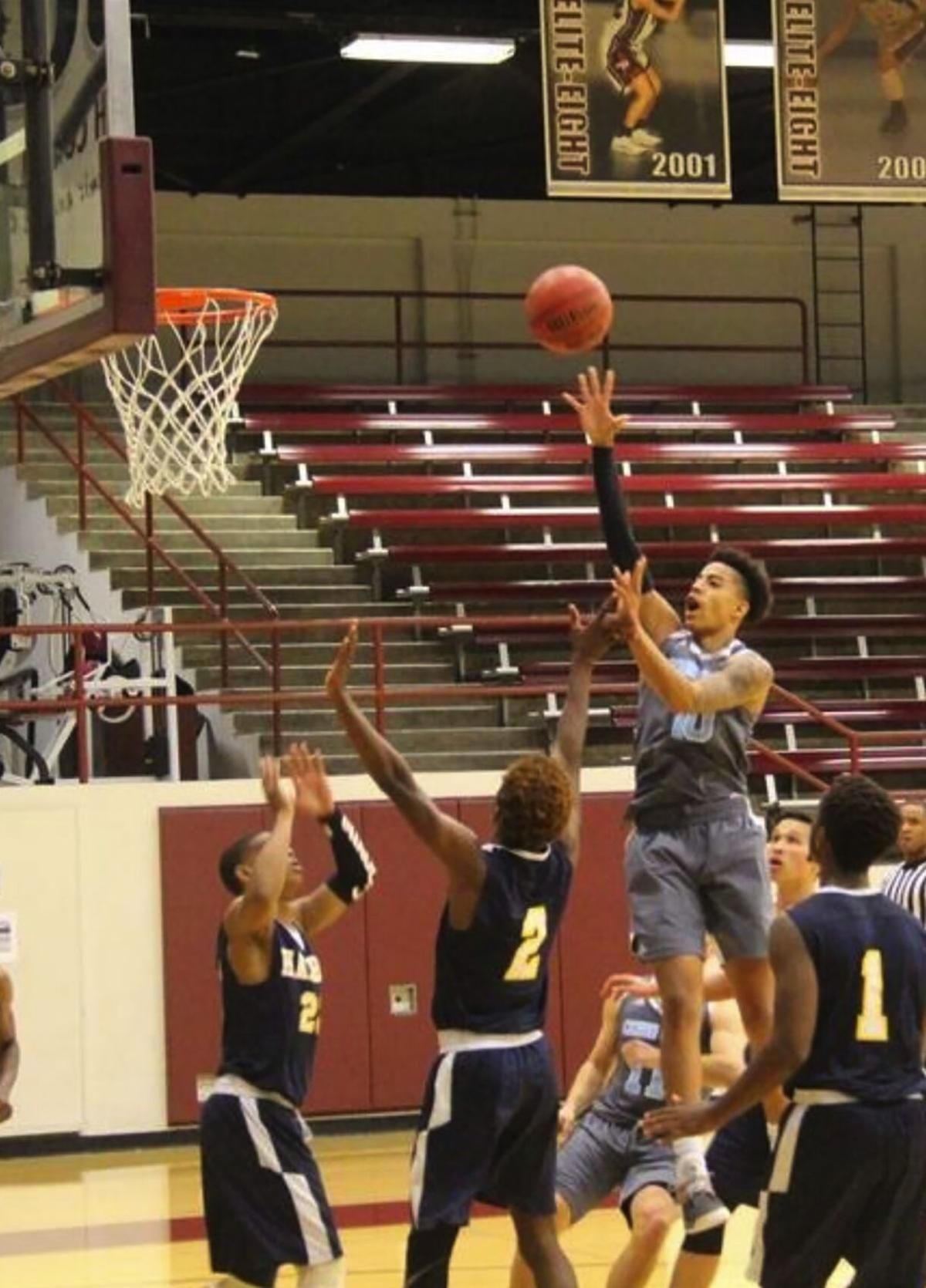 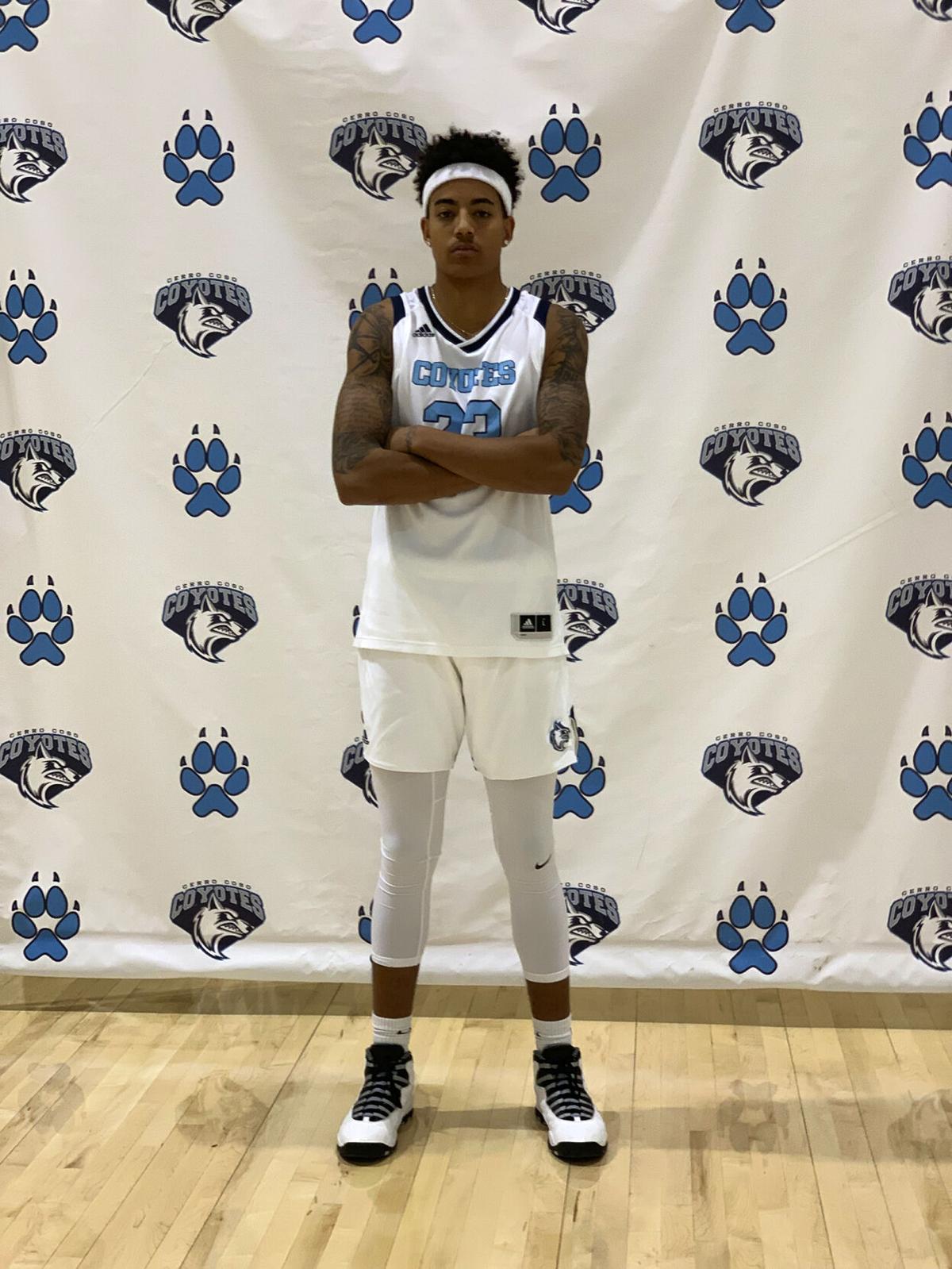 As he sits in his apartment nearly 1,400 miles from the Bakersfield home where he grew up, it’s impossible for Jordan Pumphrey not to reflect on how he got to this point in his life.

As a high school senior, the former Stockdale basketball player had few options to extend his career on the court. That was not a surprise for the 5-foot-10 Pumphrey, who spent most of his two-year varsity career as a reserve guard for the Mustangs.

Now, four years later, plenty has changed for Pumphrey, who served as a team manager for the Cal State Bakersfield men’s basketball team for two seasons after high school.

For starters, he sprouted several inches, forcing the now 6-5 Pumphrey to retire most of his wardrobe.

His added size, coupled with a desire to still play, led him to enroll at Cerro Coso, a small community college in Ridgecrest.

And the rest, as they say, is history — although in many ways, Pumphrey's has yet to be written.

An increasingly confident Pumphrey showcased his new size — adding it to an already solid mid-range game — and turned that into a scholarship to play in his current location at Fort Hays State in Hays, Kans., after leading the Coyotes in scoring the past two seasons. He received second-team All-Inland Empire Conference honors this past year.

Pumphrey’s transformation did not happen overnight. His growth spurt, and desire to continue playing, was much more gradual. It happened at the same time he was gathering up the Roadrunners’ dirty laundry, filling up water buckets and helping to set up the Icardo Center court for practices and games.

But while he was waiting for the laundry to dry, Pumphrey started to wander onto the court to take a few shots. He was often joined by CSUB players, and at times, found himself competing in a few pickup games or playing one-on-one.

And with each passing day, Pumphrey’s confidence rose.

“They pushed me to be more competitive, more confident, just a better player and person, and everything,” said Pumphrey, who is known by most simply as JD. “During my first year I liked watching these guys and that was fine. I’d like to be out there, but whatever. But by my second year there, I knew that if I put in the work and I know if I do this I can hang with these guys. And that fire in me just started getting bigger and bigger inside. And I was like, ‘no, I need to go hoop.’ ”

Pumphrey was recruited, along with current Bakersfield College guard Tyrell Coleman, to play at Cerro Coso with Coach Tom Heck, but neither ended up playing for him. Heck was replaced by Chris Dugan a week into the school year, inheriting a squad that had won just 11 games combined in the previous three seasons.

While Dugan was admittedly hard on Pumphrey, he thrived, even while being asked to play as the team’s center, in charge of guarding players several inches taller than him.

“I had to convince him that he was going to have these big, slow 6-7 guys guarding him, and it’s just going to be a field day for you,” Dugan said. “So he was kind of fighting it a little bit, but then he had like three big scoring games, and he was like, ‘Coach, I want to play (center).’”

During that first year, Pumphrey averaged 18.4 points and 6.9 rebounds per game, scoring in double digits in 25 of his 27 games and shooting 40 percent from 3-point range. In his season finale, Pumphrey was 7 of 9 from 3-point range and scored 27 points in a loss to Dugan’s former school, College of the Sequoias. Last year, he averaged 16 points and 5.2 rebounds for a team that won 18 games.

“I could see he could shoot the ball, but he just worked really hard,” Dugan said. “I think the one thing with him, like a lot of guys, is he did it the hard way. I think it just shows that if you put the time in, good things will happen. He was in the gym all the time. We did morning workouts and he was always coming and staying late and shooting the ball.”

It was a far cry from his days at Stockdale, where Pumphrey made contributions, but failed to earn a starting spot on varsity until the start of Southwest Yosemite League play his senior year.

One of the highlights of his high school career came early in the season when Pumphrey scored 13 straight points during one stretch in the fourth quarter, sinking six consecutive shots to lead the Mustangs to a 57-54 victory over a talented West High squad in the Kern Schools Shootout at Frontier High.

But those performances were few and far between. He still wanted to be around the sport he loved, so he applied to be the team manager for CSUB while working toward his Bachelor’s degree.

“Those dreams were done,” Pumphrey said. “I thought I was never going to play basketball again. I graduated at 5-10, and then one day I woke up and I was 6-4. That’s what it felt like.”

Pumphrey’s late success is not a surprise to Winston Crite, a former standout basketball player at South High, who played at Texas A&M, and went on to a long professional career, including a stint in the NBA.

Crite coached Pumphrey for several years as the owner and operator of the Footwork Shop and Footwork Elite. During that time, he noticed Pumphrey had the ability and the desire, but just didn’t have the size.

“I think he’s a warrior,” said Crite, who is working as an instructor at West High. “He could have quit a lot of times. And there were times when JD wasn’t getting playing time and he felt like he was small and weak, but his body just hadn’t caught him with him yet.”

Crite bumped into Pumphrey while he was at CSUB a few years ago, around the same time he was considering giving basketball another shot. Crite says he also offered some advice to Pumphrey’s father, Louis.

“He’s what you call a late bloomer. Some people just need a little more time to become what they’re going to become. I think mentally he wanted to be what he is. He even wants to be greater than what he is now. But his body hadn’t caught up with him.”

Now, halfway across the country, Pumphrey is looking to continue the momentum.

It’s an opportunity that was slowed by the COVID-19 pandemic, which brought college recruiting to a virtual standstill. Pumphrey’s stock was also hurt by an NCAA rule that a player’s five-year clock starts when a player enrolls in school as a full-time student, whether he plays or not. Although he plans to petition to gain another year of eligibility, Pumphrey is currently only eligible to play one more season in college.

However that petition turns out, his current coach is happy to have him.

“We’re looking forward to having him,” said Mark Johnson, who is entering his 20th season as coach at Fort Hays State. “The quality person he is fits in well with what we’re looking for in the type of player we want in our program.

“So I think he’ll fit that for sure. And then just his versatility. He’s grown so much since high school that I still feel like he’s still figuring this thing out a little bit and his best basketball is ahead of him.”

Where that takes him is something Pumphrey is excited for.

“I don’t have words for it,” said Pumphrey of the scholarship offer. “Everybody tells me that I was a late bloomer, but I guess it was meant to happen for a reason for me to grow late and go through what I went through. I was never ‘the guy’ growing up, and there weren't a lot of people who thought I could do this. But I’m going to continue working hard to see how far this can take me.”

Basketball is a kids game. Now it's about hype, selling g smoke and mirrors. Enough with this articles of so-and-so, going here, going there. Who gives a s#i+. Hit the books and learn some life skills.