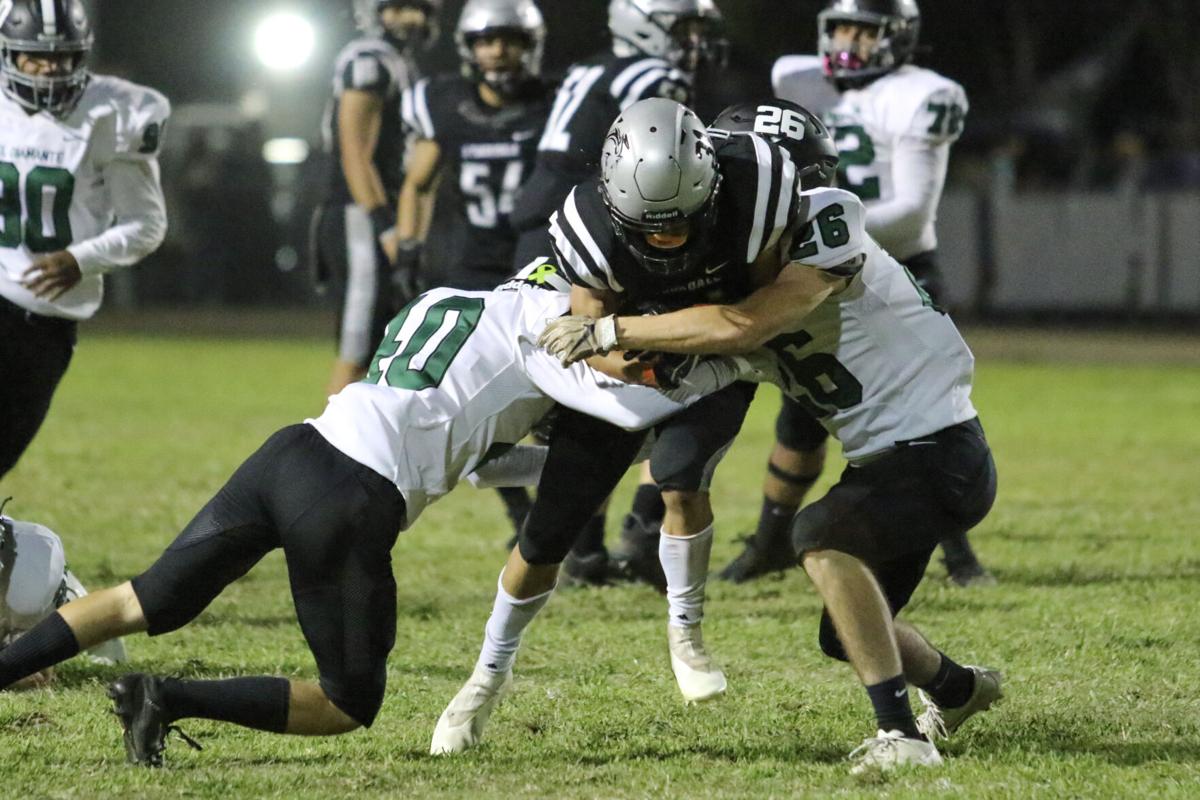 Stockdale Mustang running back Brandon Arzabal breaks through the tackle of El Diamante's Darren Childress (40) and Landon Hulsey (26). Arzabal finished with two touchdowns in the first half. 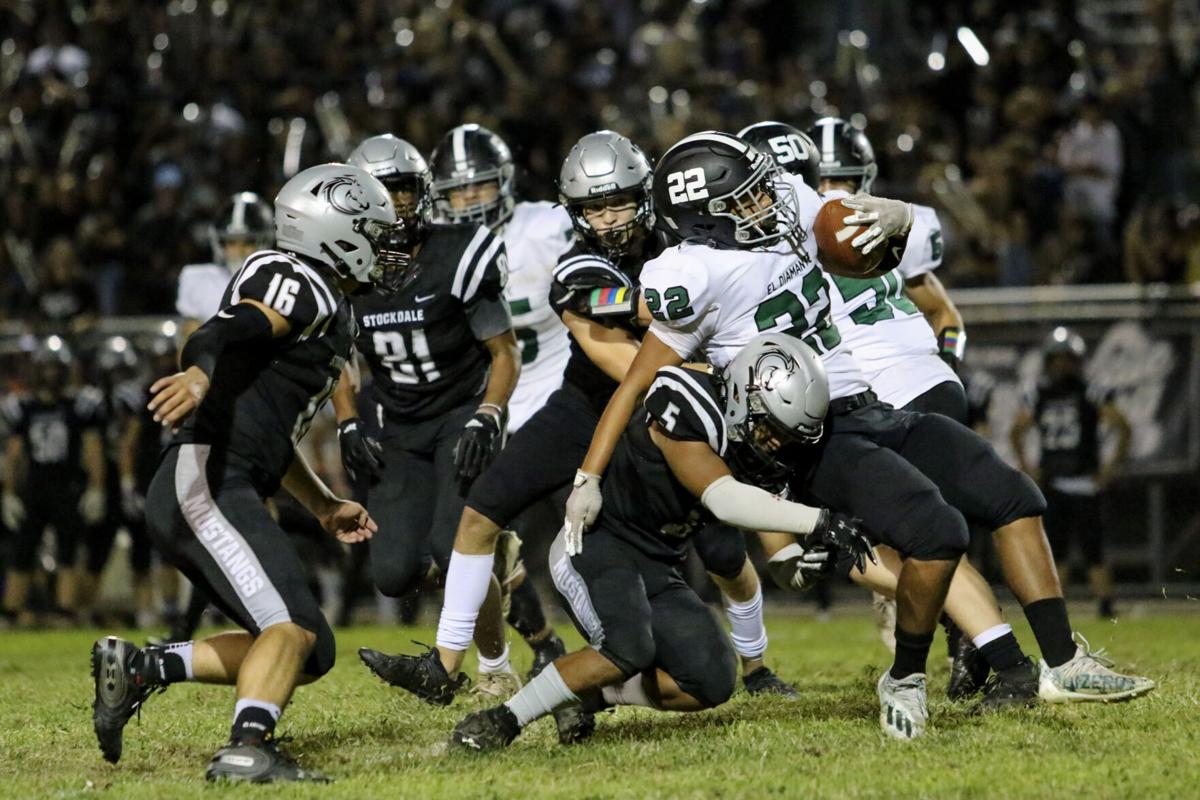 Stockdale's Aaron Charles (5) wraps up Donan Benavente (22) for a huge loss during Friday's non-league game against Visalia-El Diamante. The Mustangs improved to 3-0 with a 27-0 victory and are ranked 18th in this week's MaxPreps Central Section football Top-25.

Stockdale Mustang running back Brandon Arzabal breaks through the tackle of El Diamante's Darren Childress (40) and Landon Hulsey (26). Arzabal finished with two touchdowns in the first half.

Stockdale's Aaron Charles (5) wraps up Donan Benavente (22) for a huge loss during Friday's non-league game against Visalia-El Diamante. The Mustangs improved to 3-0 with a 27-0 victory and are ranked 18th in this week's MaxPreps Central Section football Top-25.

It’s fair to say the Stockdale football team entered this season with a chip on their collective shoulders.

Not that anyone could blame them. Heading into the 2021 campaign, the Mustangs had lost seven straight regular season games, including an 0-4 run in the spring less than five months ago.

But turning things around this year has been a smooth transition thus far, evidenced by Friday night’s 27-0 victory over visiting Visalia-El Diamante.

Senior running back Brandon Arzabal rushed for 101 yards and three touchdowns, and Stockdale forced three turnovers and blocked a punt to complete a 3-0 start to the season, the school’s first since 2016.

“We try to stay process-based and not product-based and we like our kids to have that chip on their shoulder,” ninth-year Mustangs coach Brett Shelton said. “You have to prove your worth everyday and that’s how we approach everyday, Monday through Friday with these kids. And our coaches come out here and grind it out on weekends. We like to come out and have something to prove, and they’ve embraced that attitude and they fly around.”

Stockdale showcased that ability early and often on Friday night.

On just the third play of the game, the Mustang’s Leon Smith intercepted a third-down pass by Miners’ quarterback Brandon Kreiss, stepping in front of the intended receiver with a perfectly-timed motion and returning it to the El Diamante 41. Although Stockdale was forced to punt three plays later, Arzabal’s ensuing punt went out of bounds at the 5-yard line, giving his team a much-needed early advantage in field position.

“Those are momentum shifts for us,” said Shelton of his team’s opportunistic play on defense and special teams. “We stress the importance of getting the ball back. We haven’t had many turnovers this year, and our guys really stepped up. Leon Smith’s pick was incredible. Just hustling to the ball, we run to the ball everyday, and they’ve really bought in. This is a great group of kids who really play for each other.”

Stockdale forced the Miners (1-3) to punt again on their next possession, taking over the ball near midfield. Five plays later, Arzabal scored the first of his short touchdown runs, a 3-yard scoring play to give the Mustangs a 7-0 lead with 4:38 left in the first quarter.

“Our line is great and we have our wideouts blocking, slot receivers blocking, everyone is blocking,” said Arzabal, who specifically praised fellow running back Aaron Charles’ blocking. “We practice that daily and it’s great. Shout out to our linemen. Everybody just kind of blocks, you have a running back following a running back. It’s a great way to get yards doing that. I just follow Aaron, and he delivers.”

Ifeanyichukwu Mbagwu, affectionately known simply as Ifeany by most of teammates and coaches, recovered a fumble to halt the Miners’ next possession, leading directly to a 5-yard touchdown run by Arzabal and a 14-0 lead just one minute into the second quarter.

“We’re all playing like a team,” Mbagwu said. “We all grind every practice. We know we’re underdogs, so we play like we’re down everyday. We just all play as a unit, and that’s how we can get all these turnovers and all these (good) things happen for us.”

After a failed onside kick by El Diamante to open the second half, Stockdale moved the ball 50 yards on nine plays, capped by an 8-yard TD run by Arzabal, and the Mustangs build their lead to 27-0 following a blocked punt by Mbagwu late in the third quarter, with Ian Harrison scoring on a 12-yard run with 2:03 left in the third quarter.

Despite the two big plays and his team’s hot start to the season, Mbagwu says he is not ready to ease up.

“We still have a lot of work to do,” Mbagwu said. “We’re going to go back to practice on Monday and we’re going to continue grinding. We’re not slowing down. And we’ll still feel like underdogs until we get our respect.”

Stockdale, which is scheduled to play at Moorpark next week in the team’s final tuneup before starting league, outgained the Miners 329-150 in yards from scrimmage.

Trailing 14-0 late in the first half, El Diamante moved the ball into Mustang territory late in the first half. But Julian Leon picked off a pass near the goal line with 20 seconds left in the quarter to preserve his team’s 14-0 halftime lead. Leon also had three catches for 34 yards, second only to teammate Adrien Medina’s 58 yards receiving. Quarterback Jordan Gallegoz finished 5 of 12 for 92 yards passing and also rushed for 38 yards.

“We have a lot of weapons,” Shelton said. “You want to get everyone the ball, but what we see and what they’re going to give us is what we’re going to take. It’s nice to have all these weapons because we’re able to use them when necessary. And these guys unselfishly block. Our perimeter blockers grind it out. Arzabal had a big game, but if it wasn’t for those outside receivers and the other slot that wouldn’t happen. Obviously, our line really stepped up, too.”