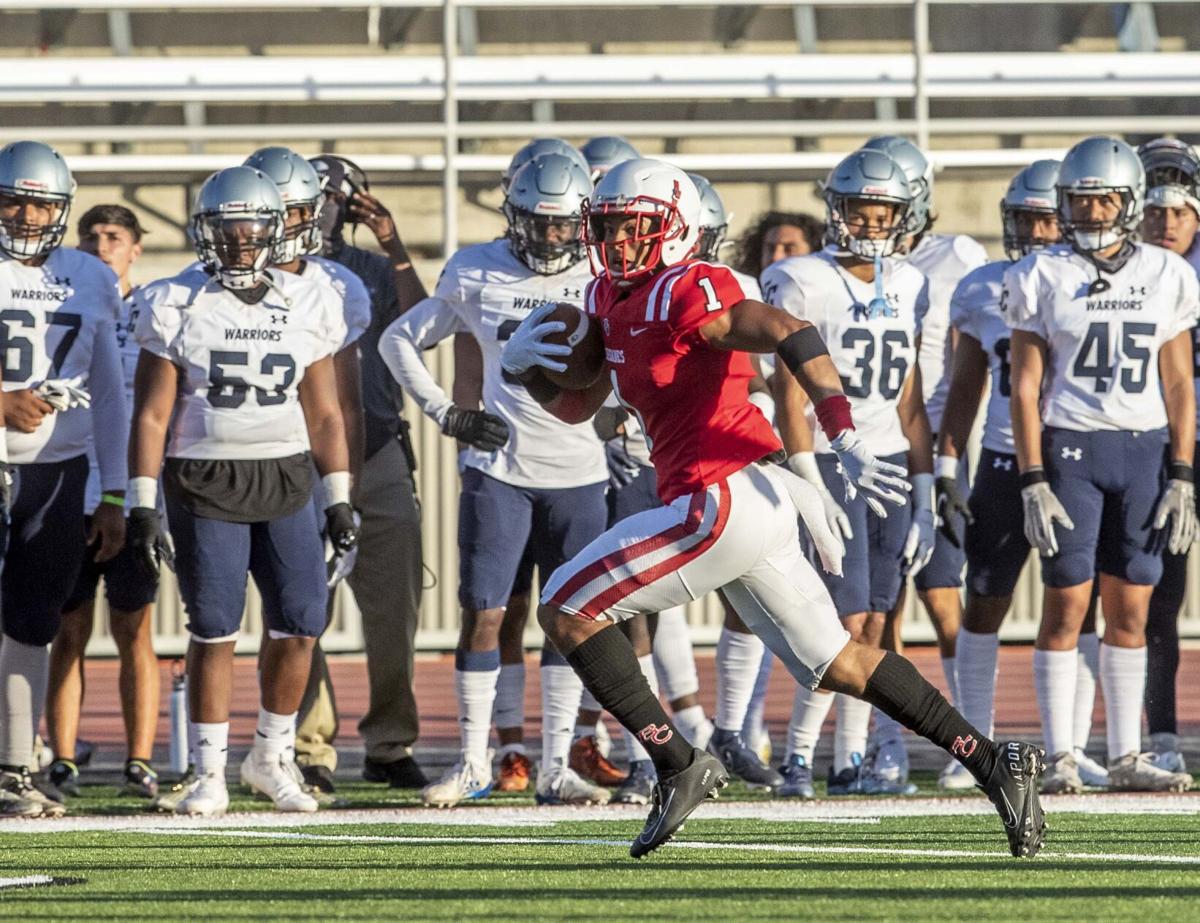 Bakersfield College's Isaac Jernigan runs for a gain against El Camino during the first half of Saturday night's game at Memorial Stadium. 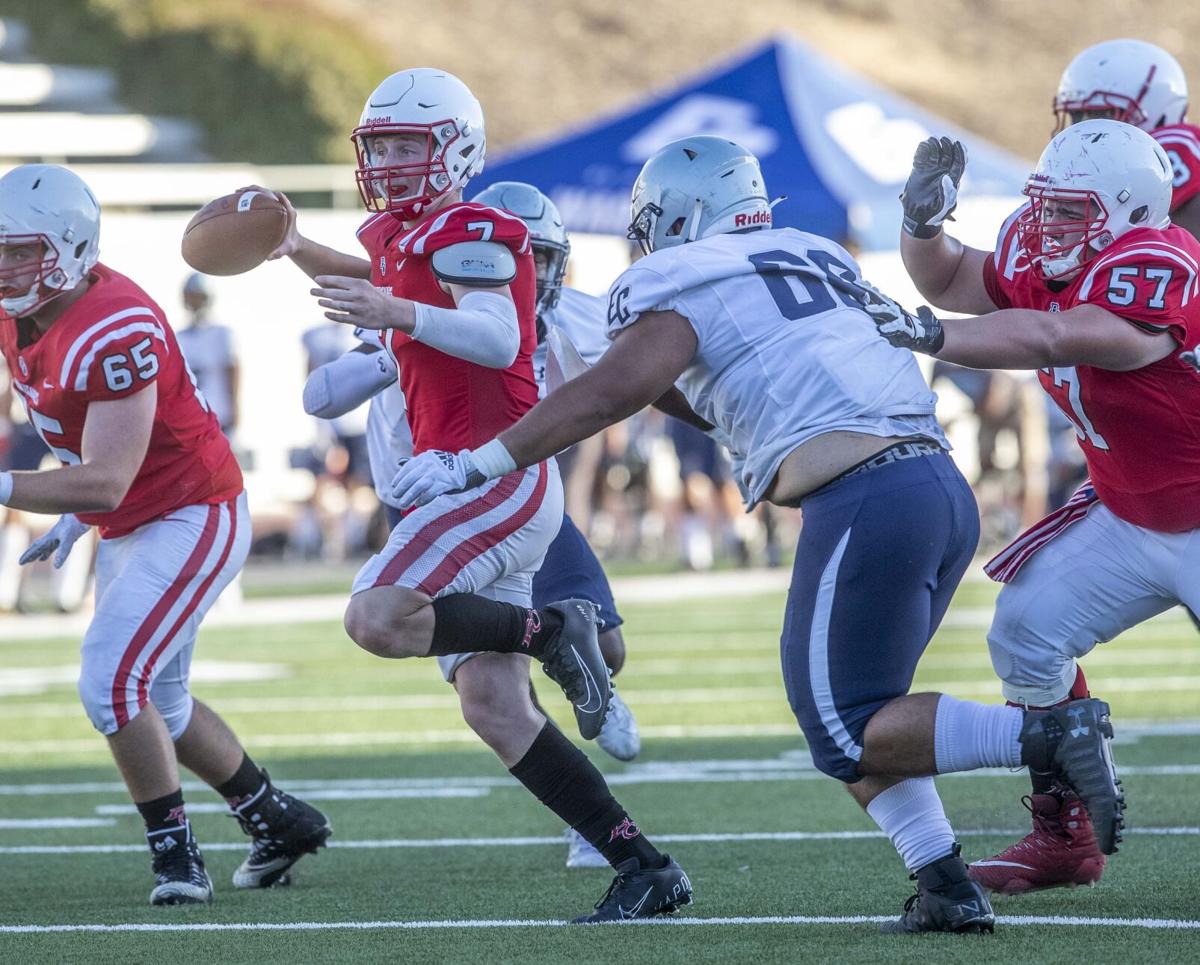 Bakersfield College's Isaac Jernigan runs for a gain against El Camino during the first half of Saturday night's game at Memorial Stadium.

Saturday night’s season opener for the Bakersfield College Renegades is a prime example of a game in which statistics do not tell the whole story.

The El Camino College Warriors nearly doubled up the Renegades in total offense, 357-188. El Camino tore through BC’s offensive line for six sacks, including three by freshman linebacker Lando Brown. And BC only converted a single third down in the entire game.

But special teams play made all the difference. In the fourth quarter, Isaiah Jernagin blocked a 26-yard field goal attempt that Mario Martinez returned to El Camino’s 13-yard line, leading to a touchdown run for Alexander Okuribido. Then after the Warriors settled for another short field goal on their next drive, Jalen Blizzard returned the kickoff 90 yards for a touchdown to set up a 24-13 victory for the Renegades.

“Having been a special teams coordinator, you just really, really realize that it’ll come down to that, especially at this level,” BC coach R. Todd Littlejohn said. “We practiced it, talked about the blocked field goal attempt, talked about getting a guy in the scoop-and-score position, and you saw it.”

Despite Littlejohn’s background, special teams didn’t initially appear to be a strength of the Renegades'. A first quarter touchdown for Zachariah-Au Hawkins stood as the game’s only score for much of the first half because Peter Delis missed a field goal at the start of the second quarter. Then El Camino’s Steven Delu blocked a punt out of the end zone for a safety to make it 7-2.

The tide turned when the Renegades retaliated, deflecting a Warriors punt right before halftime to start a drive on El Camino’s 25 and quickly add three points.

Surely the Warriors’ offense would answer in the second half. Unlike BC (1-0), which had its opener canceled, El Camino (1-1) had already played and won a game this season, a 52-14 blowout over Santa Monica in which the Warriors recorded 343 rushing yards. And to some extent, they continued that success Saturday, with Stephen Bradford tallying 108 yards on 22 carries and quarterback Mekhi Jordan adding 76 yards of his own. In the third quarter, even freshman receiver Earnest McDaniel got involved, scoring a rushing touchdown and jump-passing for a two-point conversion out of a Wildcat package to tie the game at 10.

But the Warriors couldn’t get positive yardage on the ground when it mattered most. On the drive leading to the blocked field goal, they had third and 3 on BC’s 4 before a direct snap to McDaniel led to a big loss. On the drive preceding the kickoff return touchdown, they settled for a field goal again after going backwards from second and 3 on BC’s 6. Then, trailing 24-13 with just a few minutes left, the Warriors had second and goal on BC’s 2 yard line before a five-yard loss for Bradford and a false start condemned them to yet another field goal try — which hit the left upright, sealing the game.

“Back up against the wall, and just literally buckling down right there,” Littlejohn said. “They’re a good football team, and the guys just committed to getting it done collectively, and that was a big difference down in the red zone.”

For Littlejohn, it meant his first win in his first game as the Renegades’ head coach, 20 months after he was initially hired.

“My stomach has been in knots for I don’t know how long,” he said.

The Renegades will try to notch another win at Golden West College Saturday at 2 p.m. El Camino will host Ventura College at 6 p.m. Saturday.