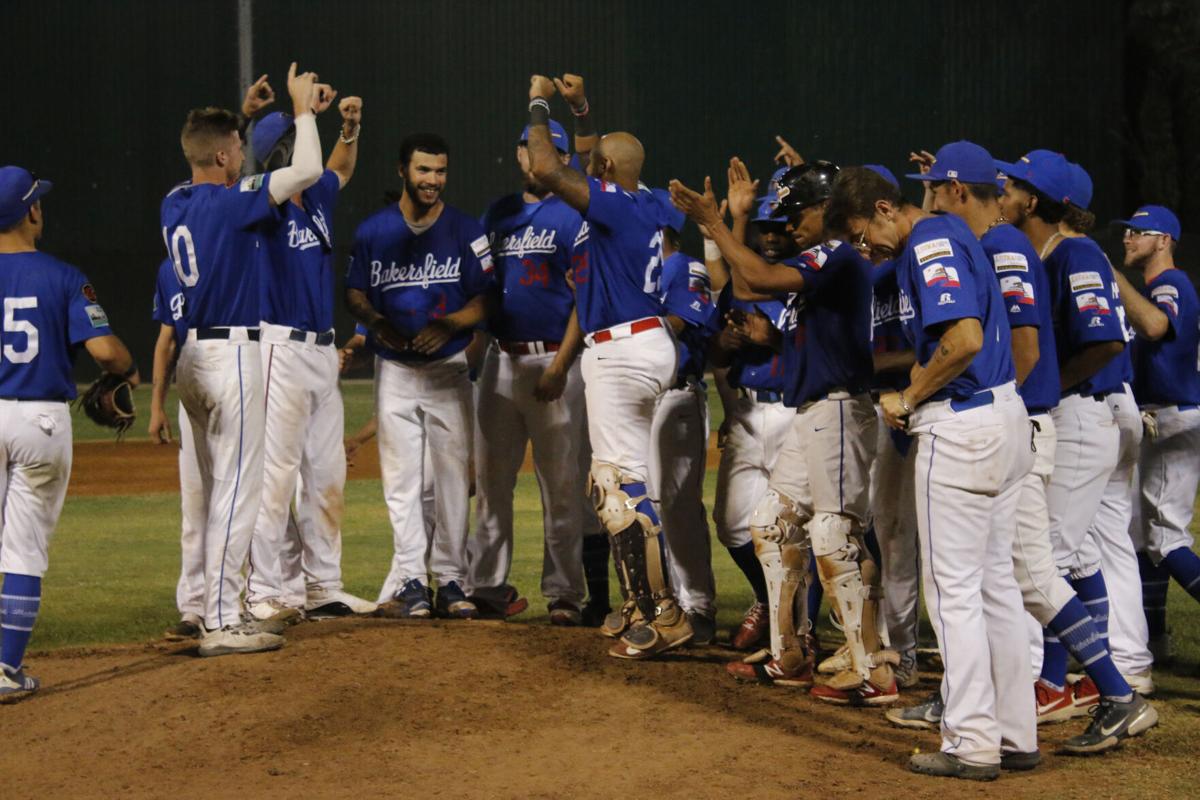 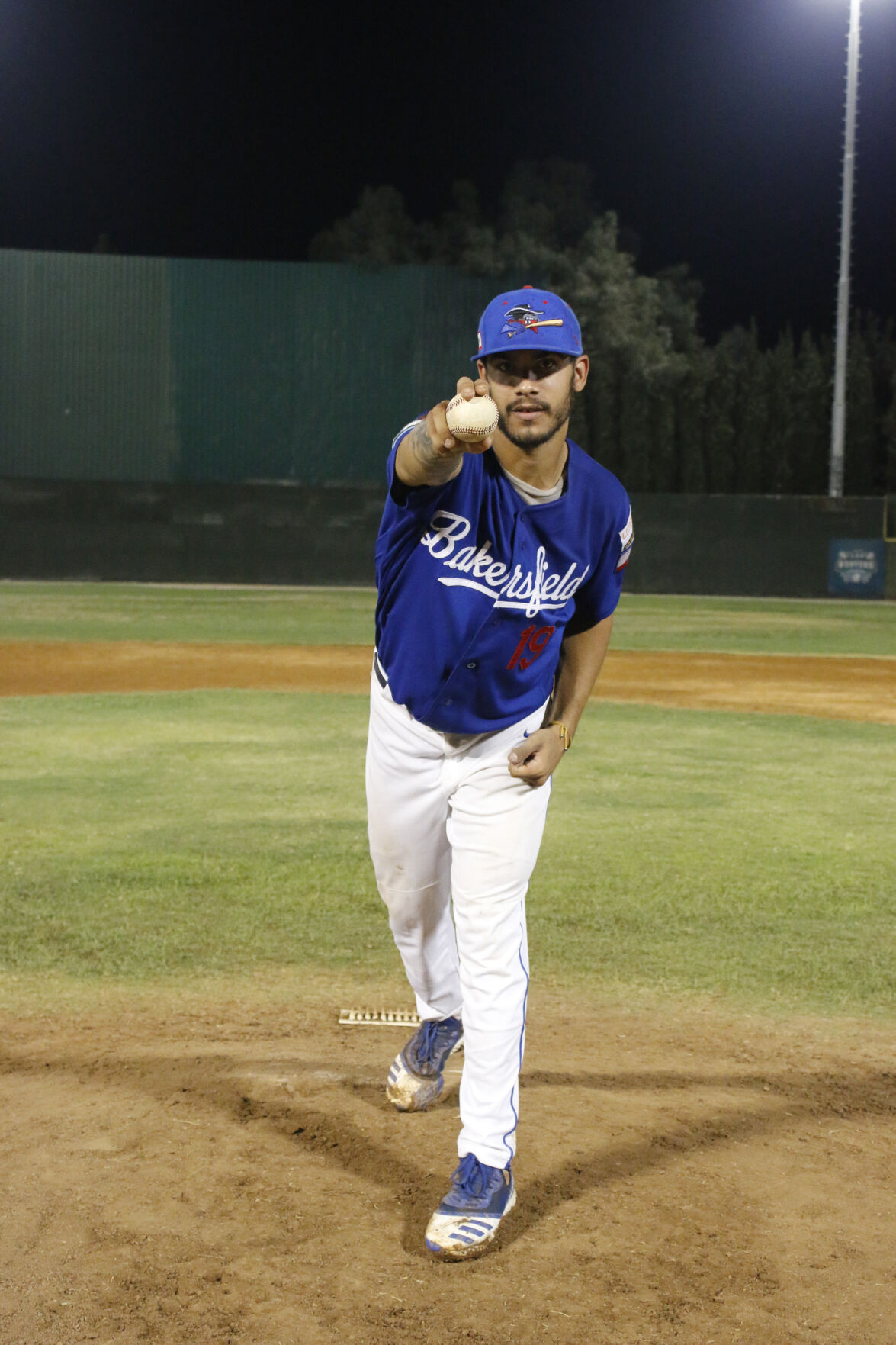 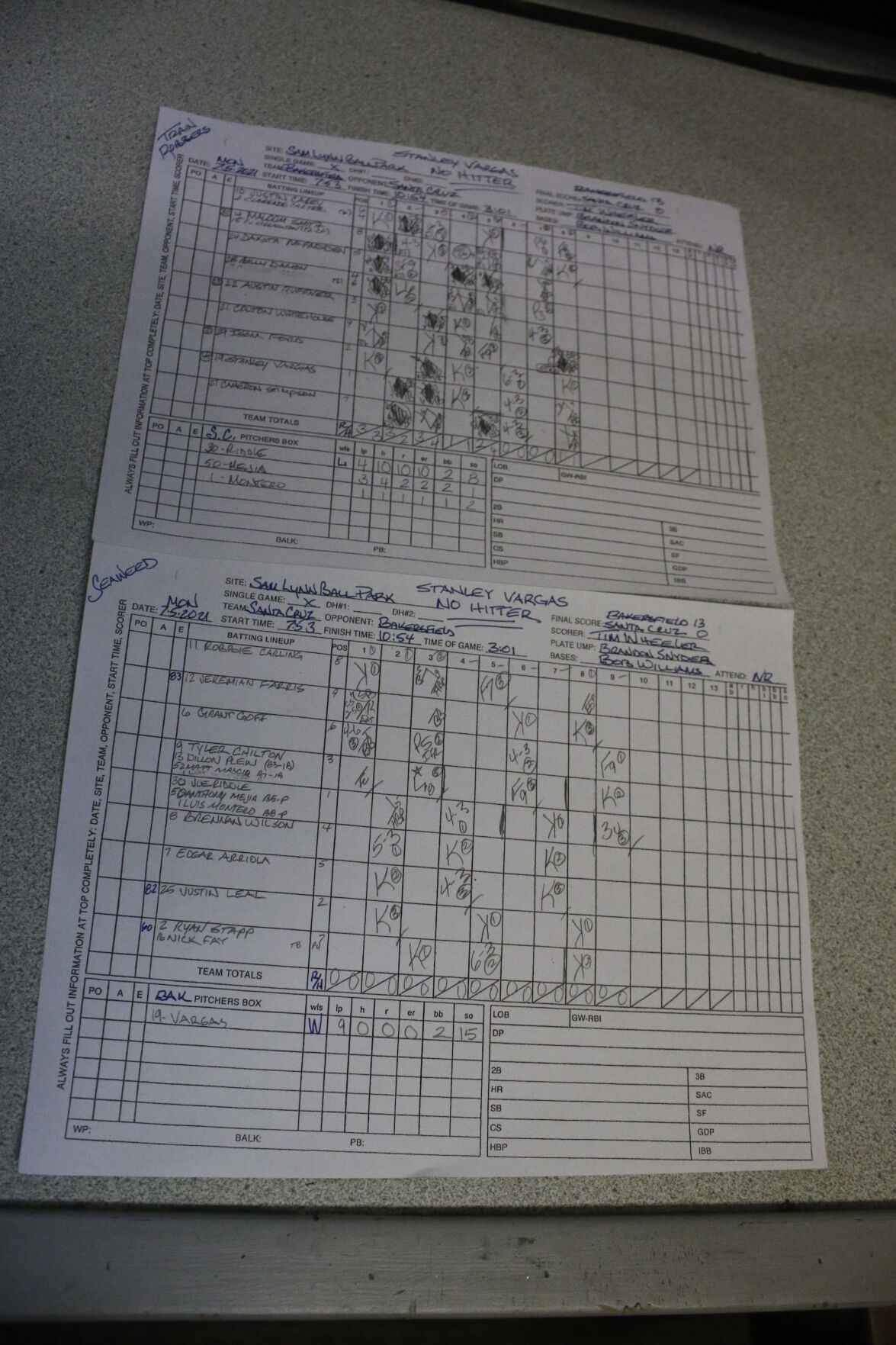 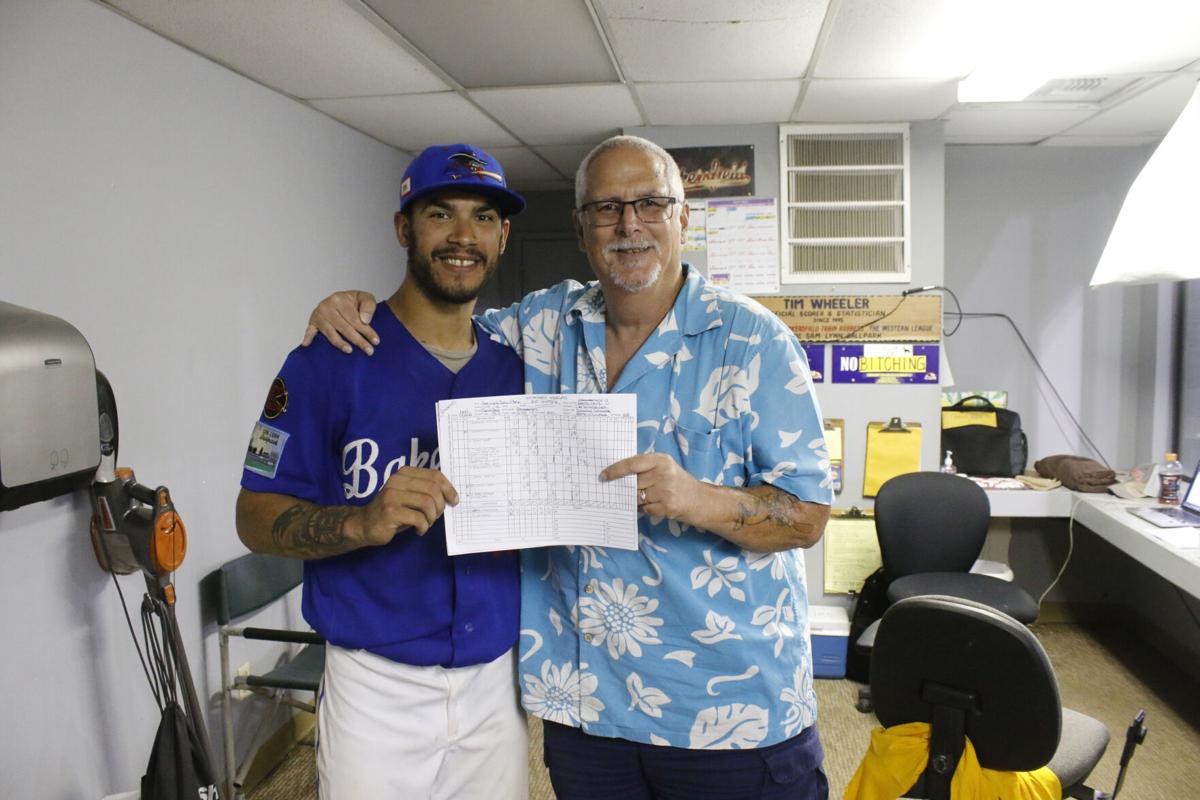 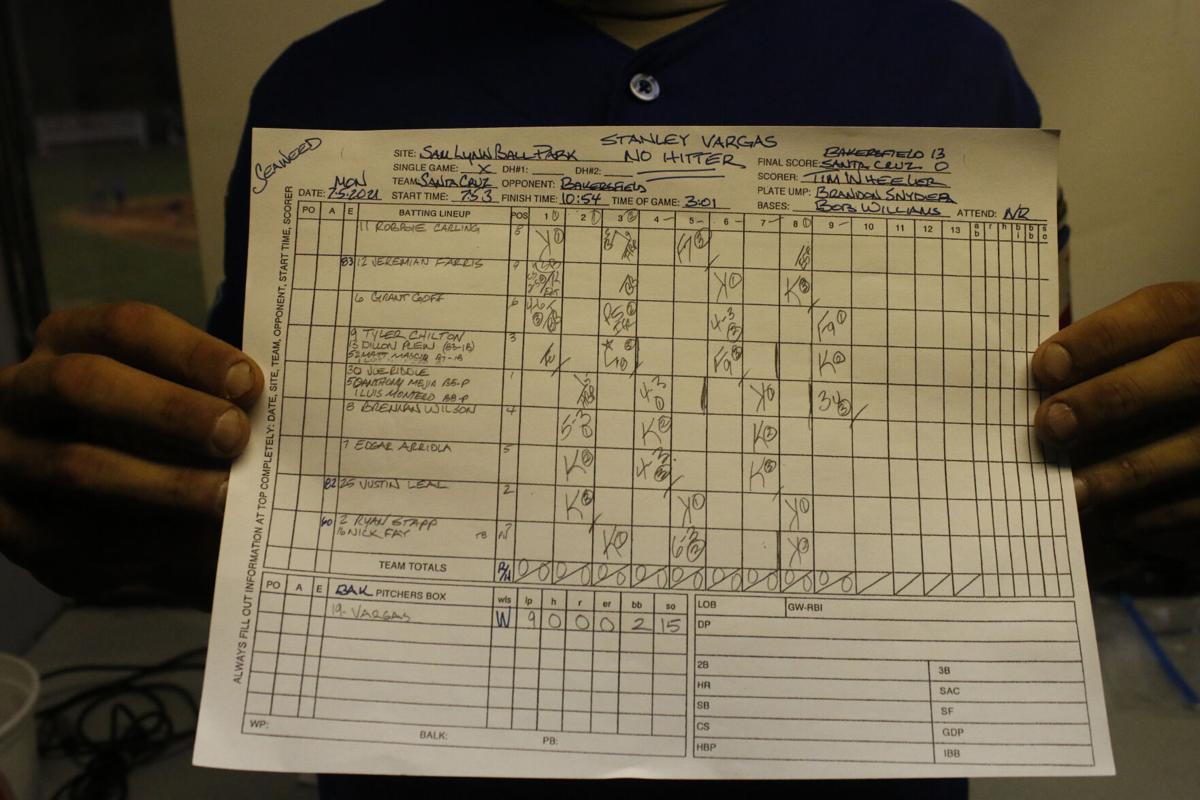 The age-old philosophical question, “If a tree falls in a forest and no one is around to hear it, does it make a sound?” was put to the test Monday at Sam Lynn Ballpark, albeit with a slight variation.

With no functioning scoreboard and official scorer/public address announcer Tim Wheeler strictly abiding by an unwritten baseball rule of not talking about it, a similar question was put to the test: “If a pitcher throws a no-hitter and doesn’t know it, did it really happen?”

Bakersfield Train Robbers right-hander Stanley Vargas found that out firsthand when he retired the last out to hold the Santa Cruz Seaweed hitless and complete a 13-0 victory, and then was surprised as his teammates stormed the field in celebration.

“That was an exciting moment, definitely,” said Vargas, who finished with 15 strikeouts in posting his first no-hitter. “I had no clue it was going on, but I was just locked in all game. That was a once-in-a-lifetime thing.”

Vargas wasn’t the only one caught off guard. Few, if any, of the couple of hundred fans in the stands were aware, and neither were Vargas’ teammates. Train Robbers manager Relly Mercurio didn’t know what was happening until checking the scorebook in the dugout heading into the bottom of the eighth inning.

“I was like I don’t think he’s given up a hit yet, but I wanted to verify it,” said Mercurio, whose team boasts a league-best 19-3 record and leads the Pacific Division by five games. “It’s one of the only good things about having a scoreboard that doesn’t work. I didn’t realize he was throwing a no-hitter. I was just paying attention to his pitch count.”

And with his team leading 12-0 and his pitcher having thrown 104 pitches, Mercurio sent Chris Rodriguez, a former Ridgeview and Bakersfield College pitcher, to the bullpen to warm up to close out the game in the ninth inning.

Mercurio quickly changed his mind once he realized history was in the making, and Vargas needed just seven pitches to close out the memorable game.

The no-hitter was the first in the Pecos League’s 11-year history, and the first thrown by a professional Bakersfield pitcher at Sam Lynn Ballpark, which opened in 1941. The Blaze did have a combined no-no in 2016, the final season of affiliated baseball in Bakersfield, but this is the first by a single player.

Following the game, Wheeler presented Vargas with the scoresheet for the game. It is just the second time in nearly 1,800 games at the ballpark that Wheeler has parted with a scoresheet. He has saved the rest in a career that started in 1995.

"His smile was ear-to-ear," said Wheeler, who originally planned to joke with Vargas and tell him he was changing one of the errors to a hit, but changed his mind when he saw the pitcher's excitement. "I just told him great job and congratulations. Enjoy the moment. Cherish the moment. I mean, this is the Pecos League, which is a hitters league. What a great accomplishment. I was just happy for the kid."

Vargas struggled with his control a bit in the first couple of innings, walking two and hitting two more in the first three innings. But the 23-year-old settled in as Bakersfield built a 9-0 lead heading into the fourth inning.

“I’m still shocked with his performance the other night,” Mercurio said of Monday's game. “To be honest, he didn’t have the best control in my opinion. Which is why I didn’t believe he was throwing a no-hitter. Two hit batters, two walks, but there were a couple of times where he wasn’t even close to the strike zone on some pitches. I guess whatever works, he was effectively wild sometimes.

“He’s got some lightning stuff, but that was the thing. He can throw better than what he did the other night and he still struck out 15 and threw a no-hitter.”

He also benefited from a few solid defensive plays, including one by PJ Harrington, who made a sliding, diving catch in right-center field to end the third with runners at first and third. Harrington entered the game in the second when starting center fielder Malcolm Smith left the game with a leg injury.

“That would have been the only hit that they would have had,” Mercurio said. “It always seems like there’s that one extra effort, SportsCenter Top-10 play that helps to preserve a no-hitter. But it was really early in the game so there was no way we would have known that would be the difference maker.”

The play was the start of an impressive stretch for Vargas, who retired 20 of the final 21 batters he faced. The Seaweed’s Robbie Carling reached on an error with two outs in the eighth. Vargas struck out the side in the seventh and eighth innings, and got two quick outs before enticing Luis Montero to ground out to first base to end the game.

“I felt like my (velocity) was a little up and I was feeling better about the location of my fastballs,” Vargas said. “I was able to locate the fastball for the most part, down at the knees and away. And when they did put the bat on the ball, which they did a couple of times, we had crazy defensive plays. It was just incredible.”

The Boston native wasn’t sure that baseball was in his future when the COVID-19 pandemic hit last year. He started working at a shoe store, and although he says he still worked out at the gym, he stopped virtually all baseball training prior to finding out about the opportunity to play in Bakersfield just a week before the June 10 Pecos League season opener.

“When I talked to him on the phone about coming out here, he was on the fence about it,” Mercurio said. “He just wasn’t sure. And I just blatantly told him, ‘you either want to play baseball or you don’t.’ And then later that day or the next day I found out he had his flight booked.”

Vargas arrived in Bakersfield a few days before the opener and Mercurio assigned him to the bullpen to start the season. But when former Major League pitcher Manny Corpas left the team to play for a team back East, a spot in the starting rotation opened.

In his first start, just one week before the no-hitter, Vargas earned the win over the same Santa Cruz squad in less impressive fashion, allowing four earned runs on 10 hits in 6 ⅓ innings, with four strikeouts and two walks. He did have a big day at the plate, finishing 3 for 3, and a home run shy of hitting for the cycle. He walked in his final at-bat. He is 7 for 16 this season.

Vargas’ follow-up performance was much more spectacular, at least on the mound.

“It was definitely one of the greatest moments of my life,” said Vargas, who is scheduled to start this Monday. “I can’t even explain it. It’s just … apart from winning the regional championship … It's unbelievable.”

Despite the no-hitter, Vargas says he prefers to remain focused solely on helping his team win games right now.

“We’re just trying to come out here and beat teams up, win some games and win this whole league,” Vargas said. “That’s what we’re really focused on now. I’m not letting any distractions get in the way.”