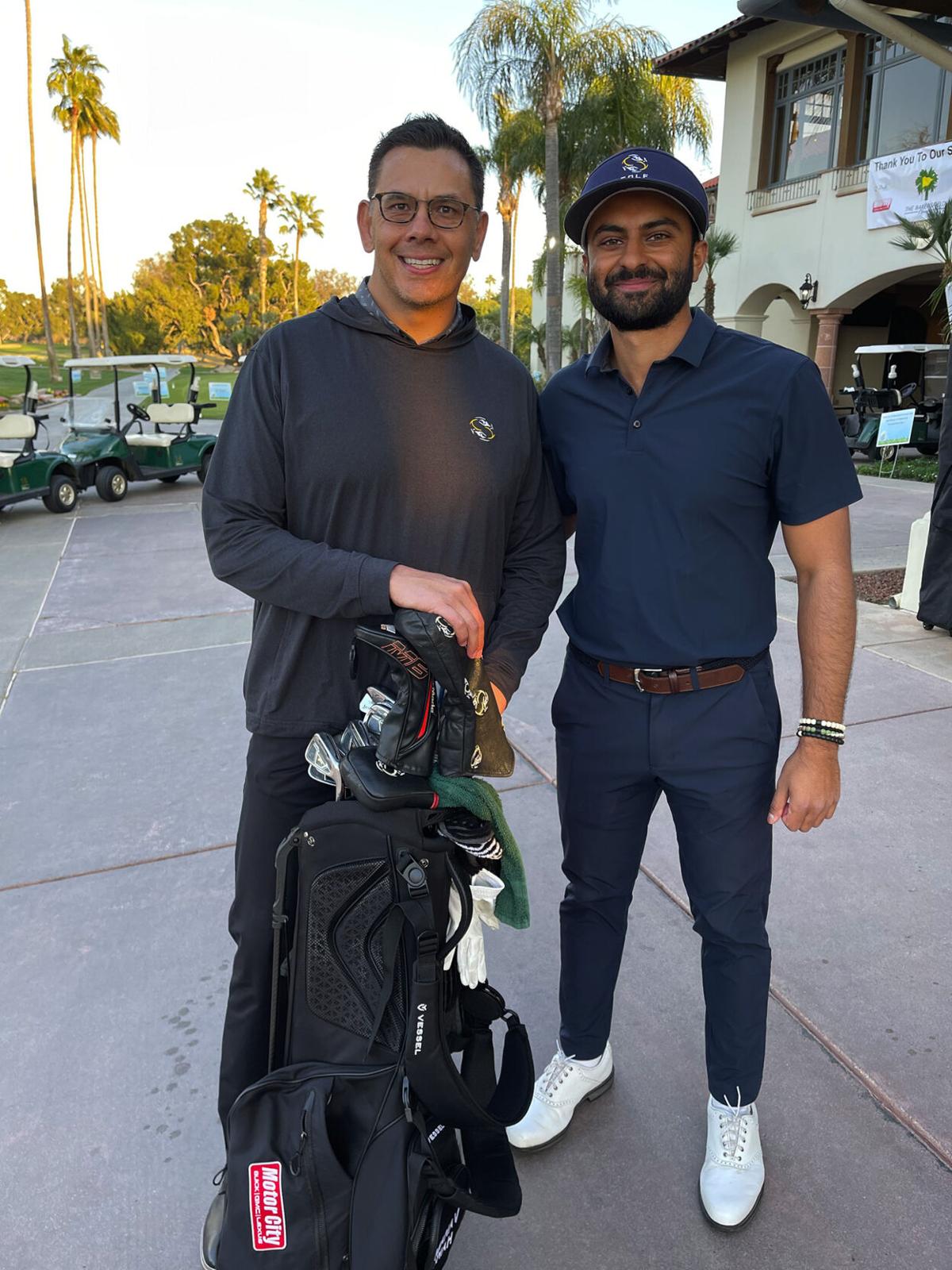 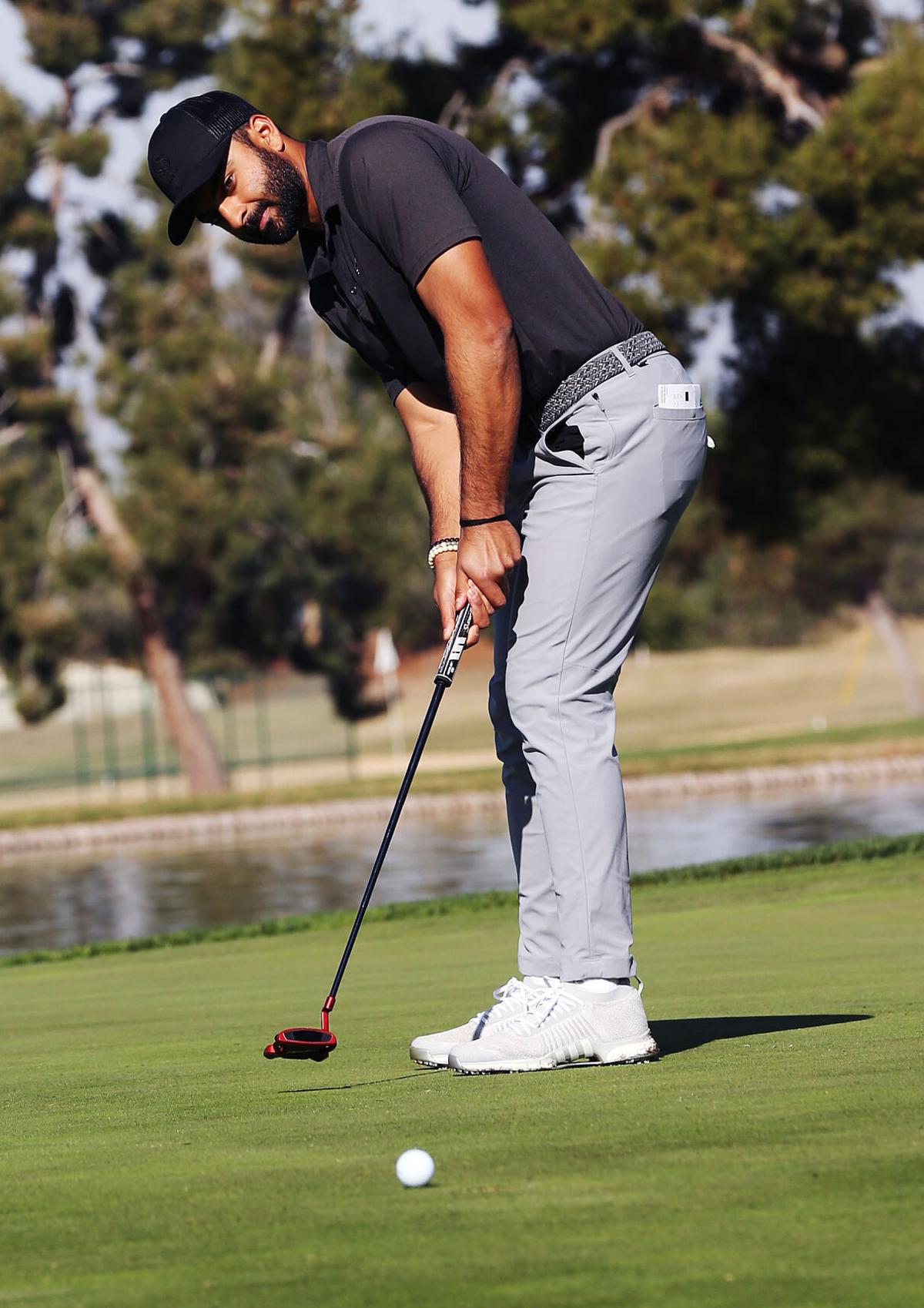 Manav Shah watches his putt on hole No. 12 fall into the hole during the opening round of the Bakersfield Open on Tuesday.

Manav Shah watches his putt on hole No. 12 fall into the hole during the opening round of the Bakersfield Open on Tuesday.

There was still plenty of golf to be played, but when Manav Shah chipped in his third shot on No. 18, the roar from the roughly 100-person gallery seemed to almost foreshadow what was to come.

Tied with two others at the time, the birdie shot on the par-4 final hole was the final piece in a remarkable comeback by the former Centennial High standout in what turned out to be a two-shot victory at the Bakersfield Open on Thursday afternoon at Bakersfield Country Club.

“That was special,” Shah said. “I’m not an emotional guy. Usually on the course I’m pretty calm and relaxed, but as soon as it went in, I had to let it out. It felt great. I’m just grateful that I even had a chance to take the lead, and thankful for everyone that came out and watched. It was a fun day.”

Trailing by three shots heading into the final round, Shah began to pick up ground on his favorite stretch on his home course, the final four holes.

The 28-year-old birdied No. 15 and then parred 16 and 17 to set up his fantastic finish. After his tee shot on No. 18 was blocked by a tree, Shah punched the ball out into the fairway just short of the green. He calmly knocked the shot just onto the green and ran the ball up into the cup to create a three-way tie for the lead at 7-under par.

“Fifteen through 18 are definitely my favorite holes on the course,” Shah said. “I usually have good vibes on those holes coming in. So it’s good to get that done in a tournament.”

And it’s not the first time he’s made a chip like that, this one was just a bit more significant, and netted him $20,000 for winning the event.

“I’ve made one for not quite as much money,” said Shah with a chuckle. “But this one was worth a lot more than those ones.”

Meanwhile, co-leaders Colton Lapa and Jeffrey Kang still had four holes to play. Both had trouble down the stretch.

After birdying 15 to tie Lapa for the lead, Kang found trouble and bogeyed 16 and then dropped another stroke on No. 18.

“It’s just a tough golf course,” Kang said. “You get in the wrong spot and it’s kind of a bogey there, you lose a shot. And with the greens being so firm and fast, birdies don’t come easy. I saw the leaderboard and I knew where I stood. I just didn’t execute coming in. It’s unfortunate, but it’s still a good week"

Lapa, who opened the day at 7-under and had been consistent throughout, bogeyed 15 and 16 and triple-bogeyed 18 to finish five shots out of the lead.

“Overall I played great this week, but I kind of had a few tough breaks (on the last few holes),” Lapa said. “I had a couple of bad bounces and my ball got stuck in a tree on 18, so that was unfortunate, but overall it was great. Manav played great and overall it was a good tournament.”

Shah had to finish his final three holes of his second round Thursday morning and made the most of it. After birdying the par-5 15th just before darkness fell on Wednesday, he picked up two more shots with a birdie on 16 and 18 to equal his first round with a 68. Shah was 7-under par for the tournament on the final four holes.

He continued his solid play on the final round, recovering from a bogey on No. 4 with three birdies over the next seven holes to set up his fantastic finish.

“We just wanted to hit one shot as best as we could all day, and that’s all we did all day” said Shah, who won the event in 2018. “It was playing really hard out there. From one to 18 we had the same intensity, and we got to the last hole and (his caddie) Jimmy (Sisneros) told me we needed one more … and I had a really good chip. I’ve hit that chip a couple of times and it’s pretty straight once it gets on the green. So I just had a really good feel for it and thankfully it went in.”

Defending champion Matt Picanso had a solid tournament and was in contention before suffering three bogeys and a double-bogey during a five-hole stretch. He finished one-over for the tournament with a final-round 74.