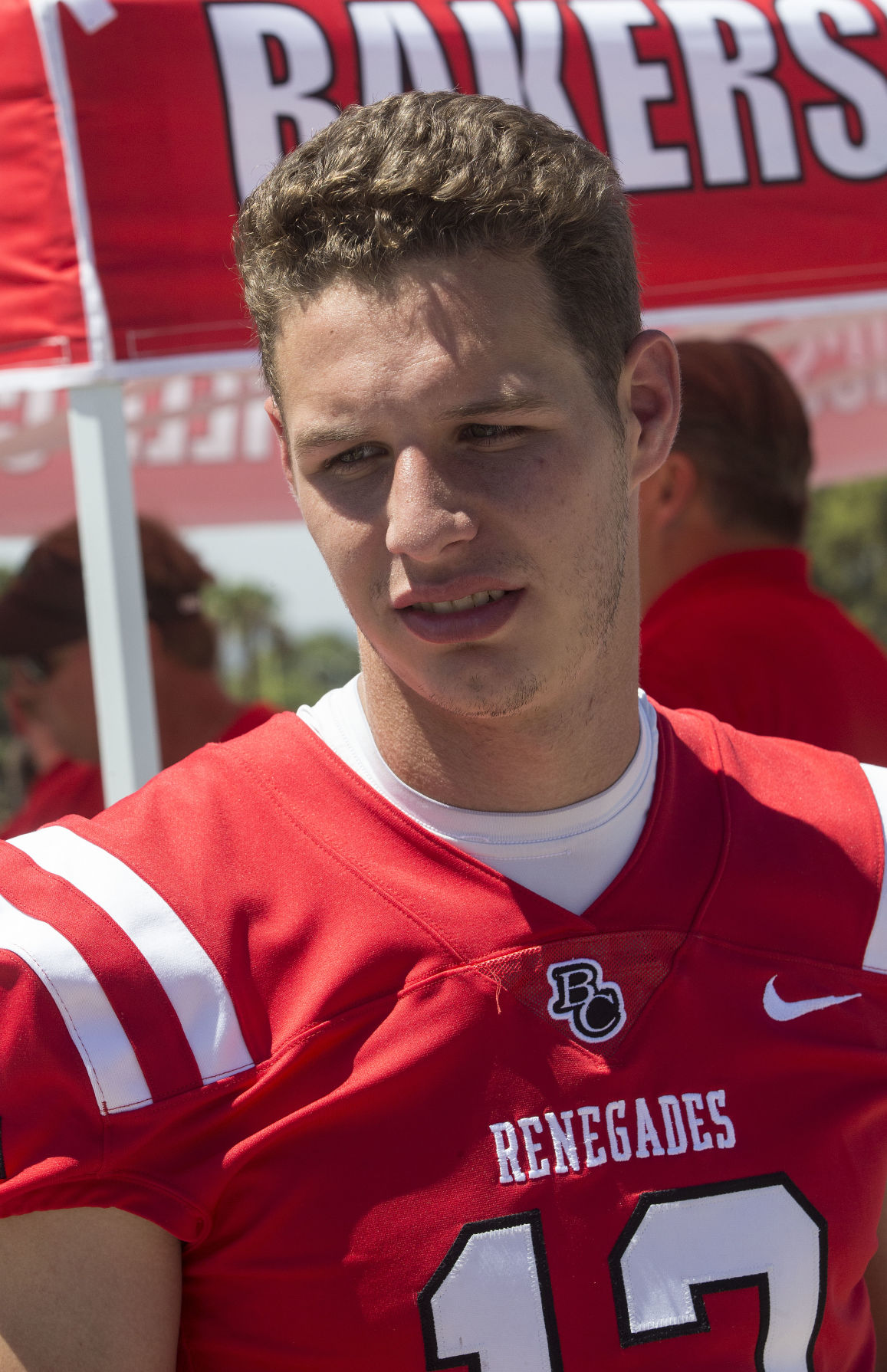 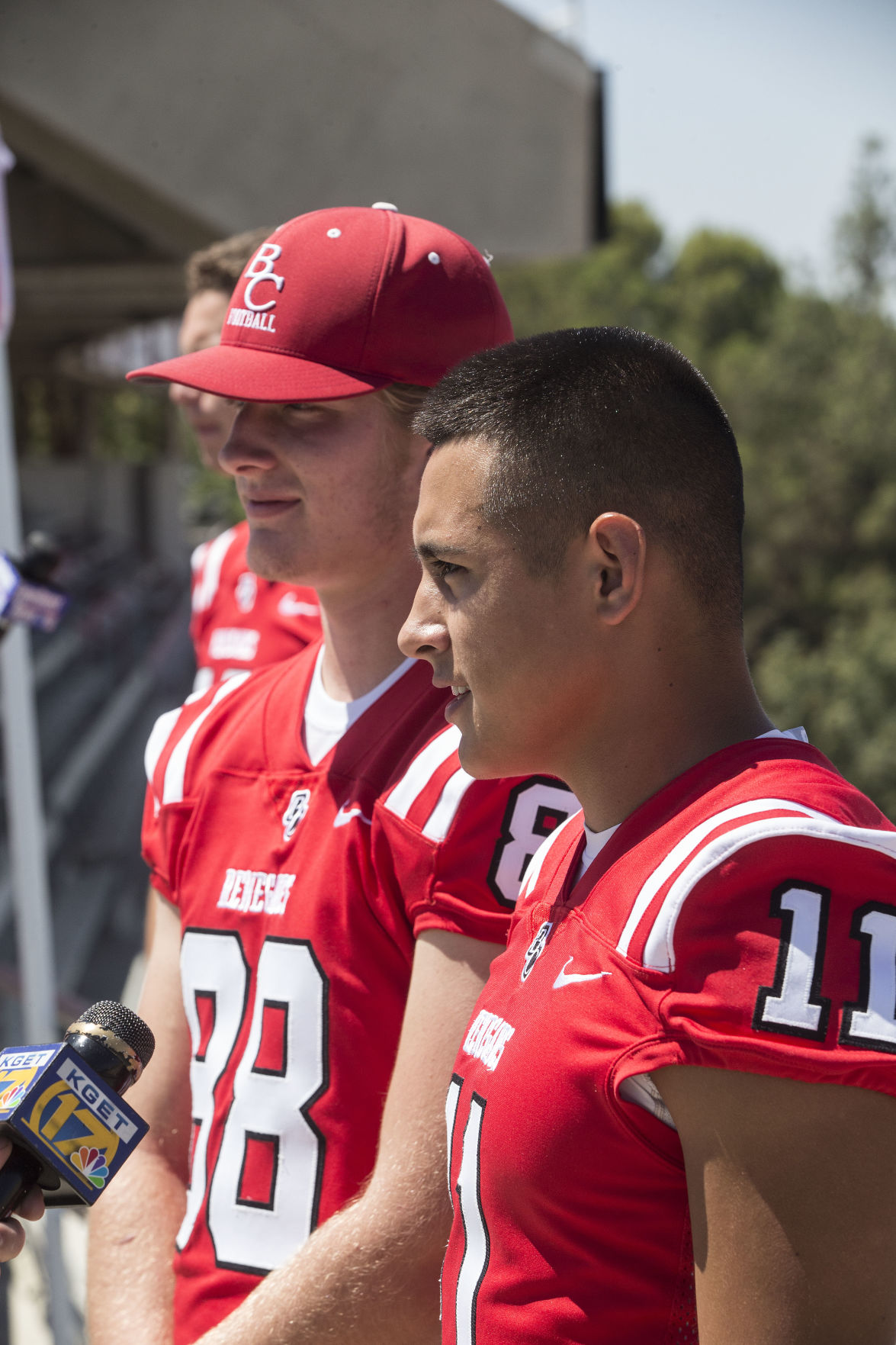 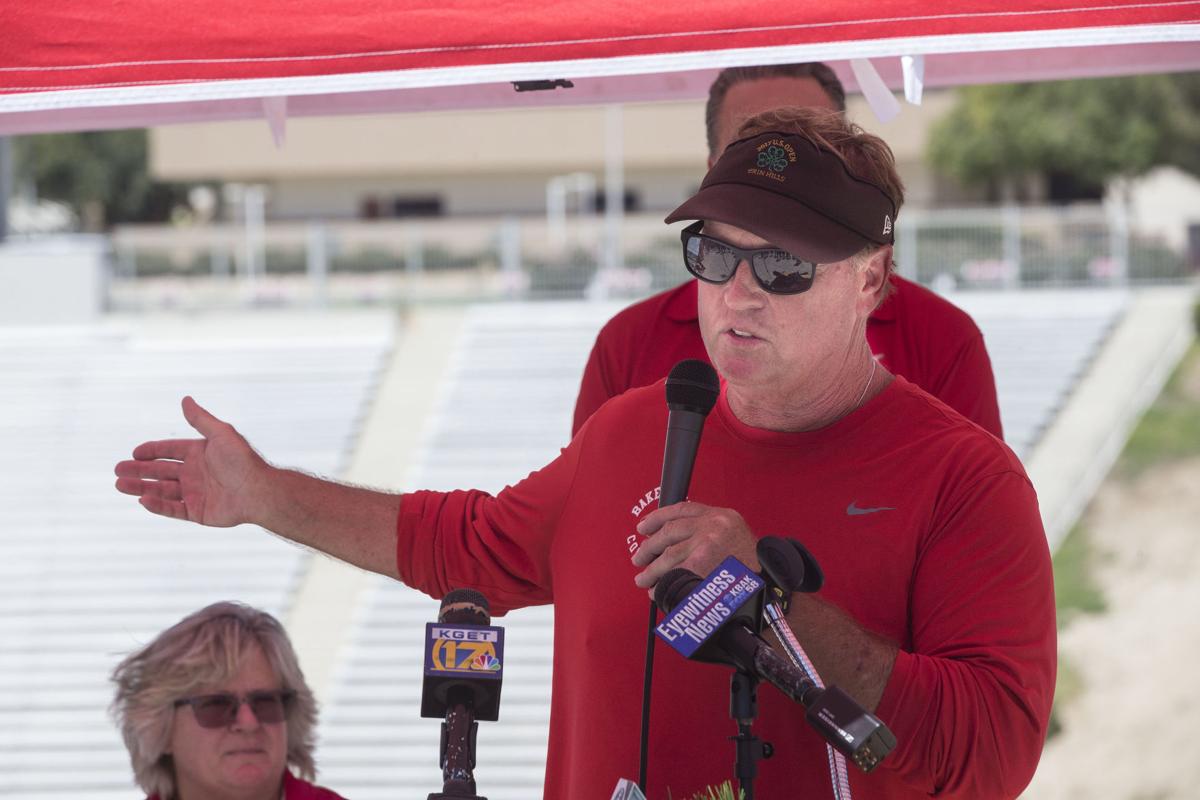 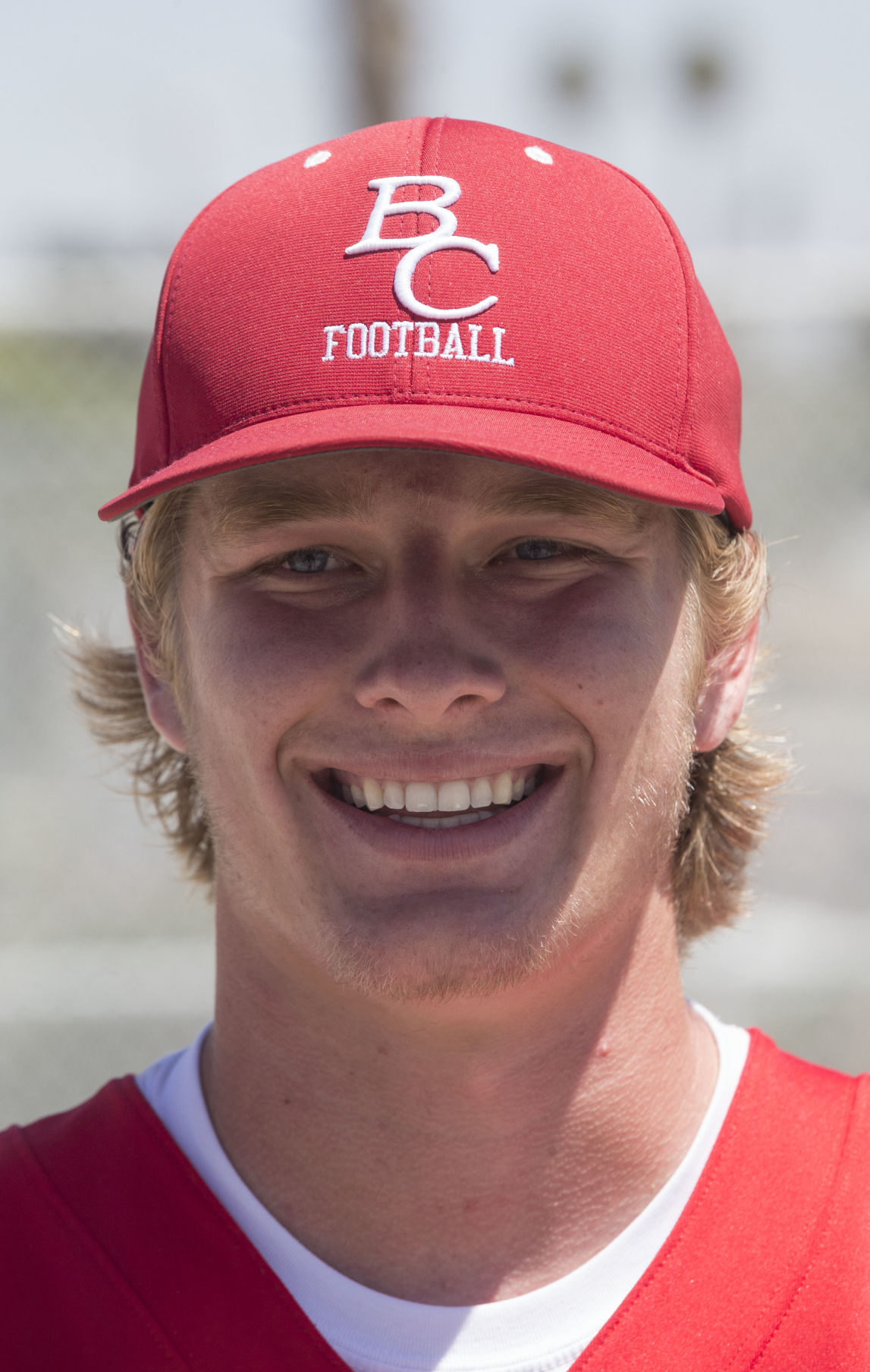 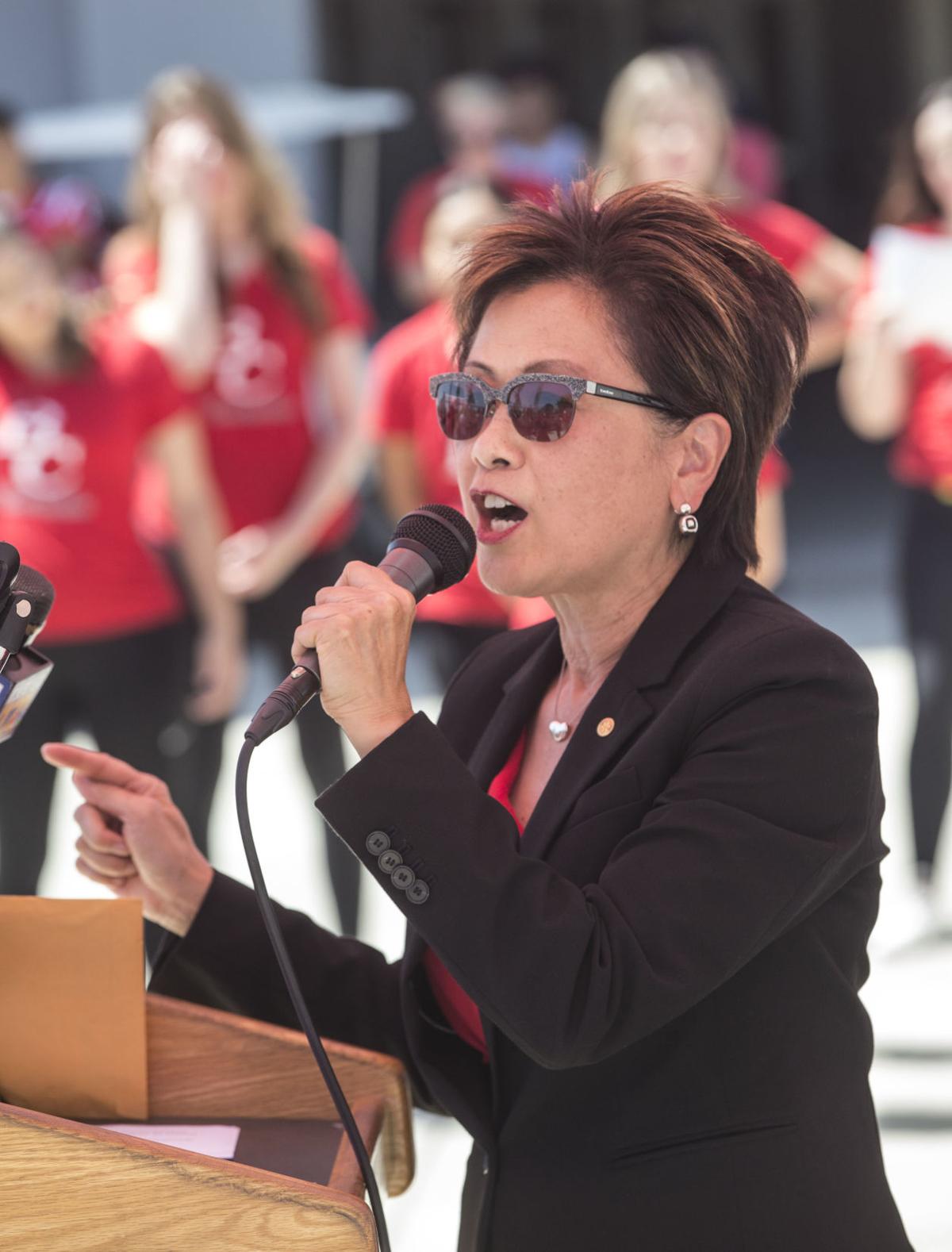 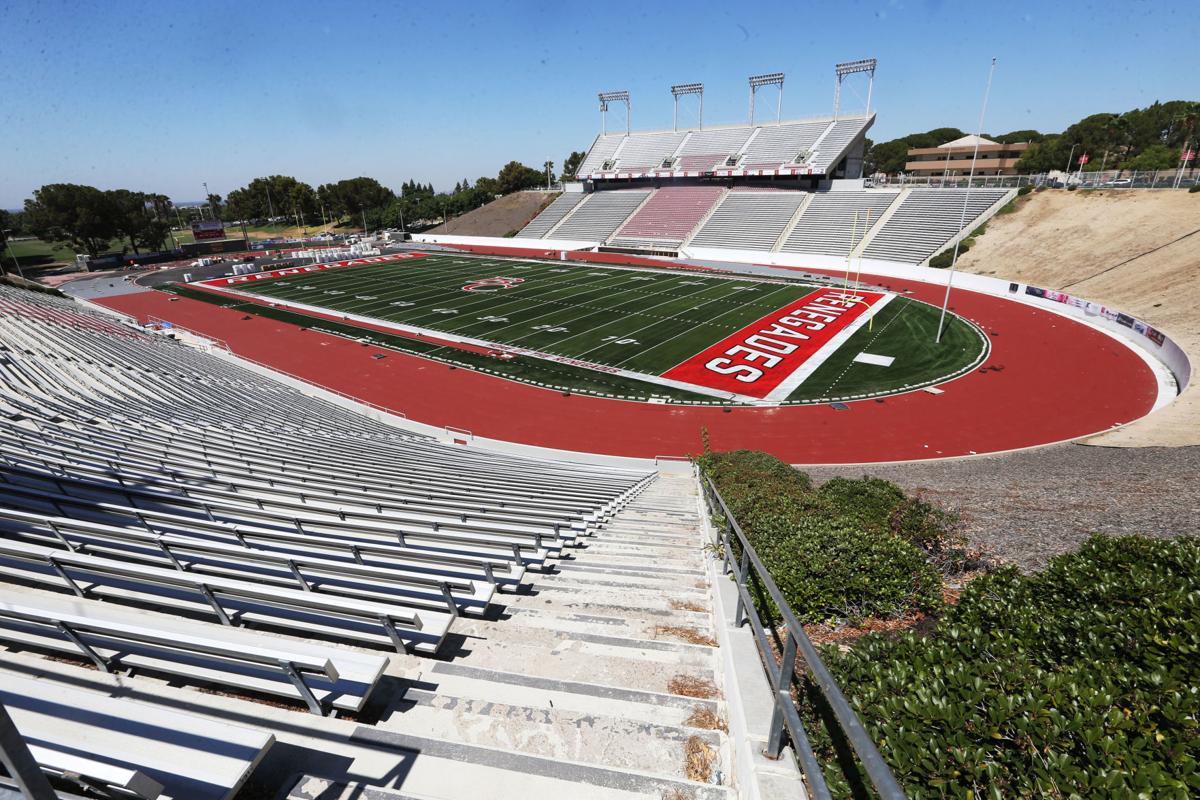 A glimpse of the new artificial turf at the stadium. Bakersfield College football hosted a media day at Memorial Stadium on Wednesday. 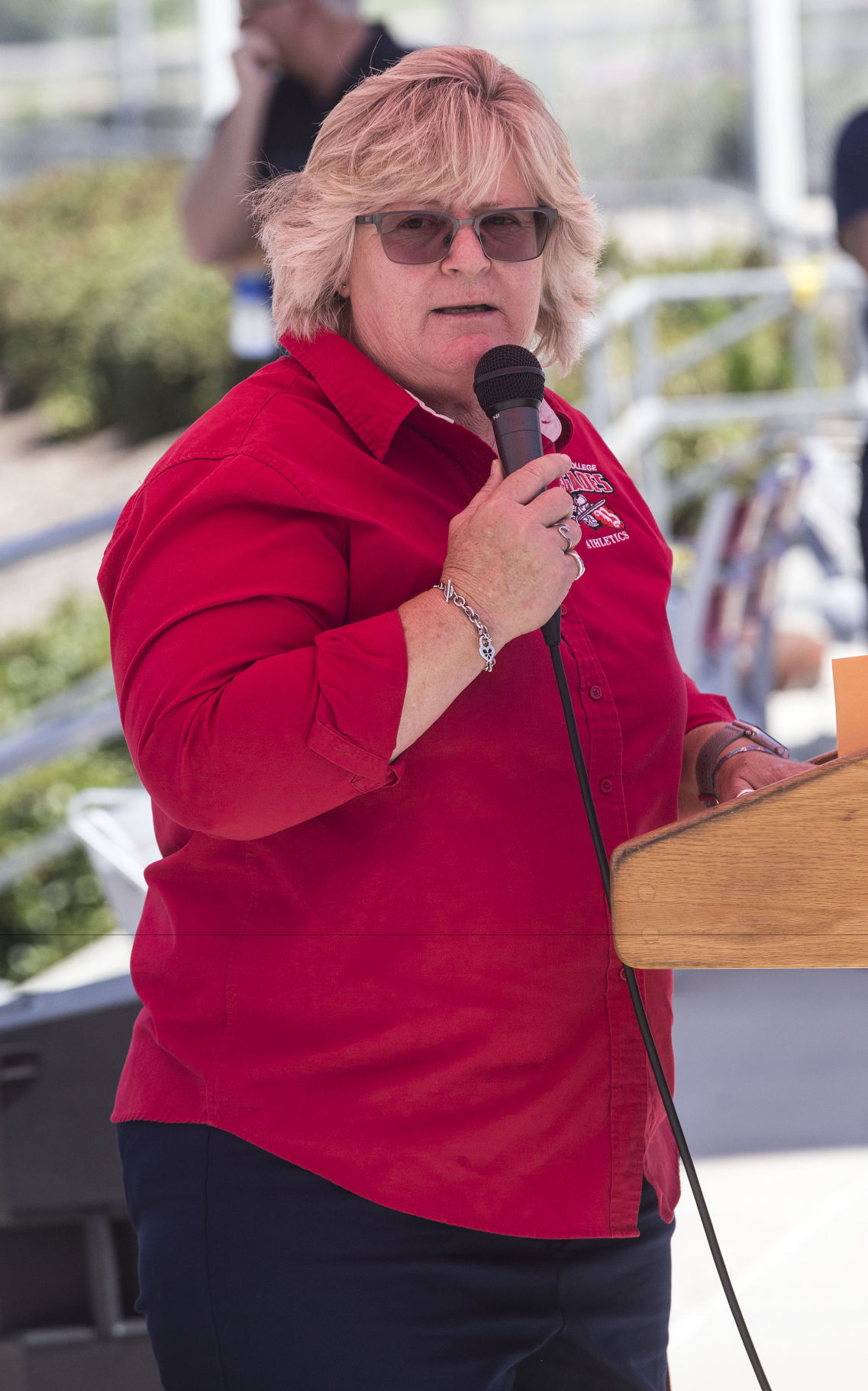 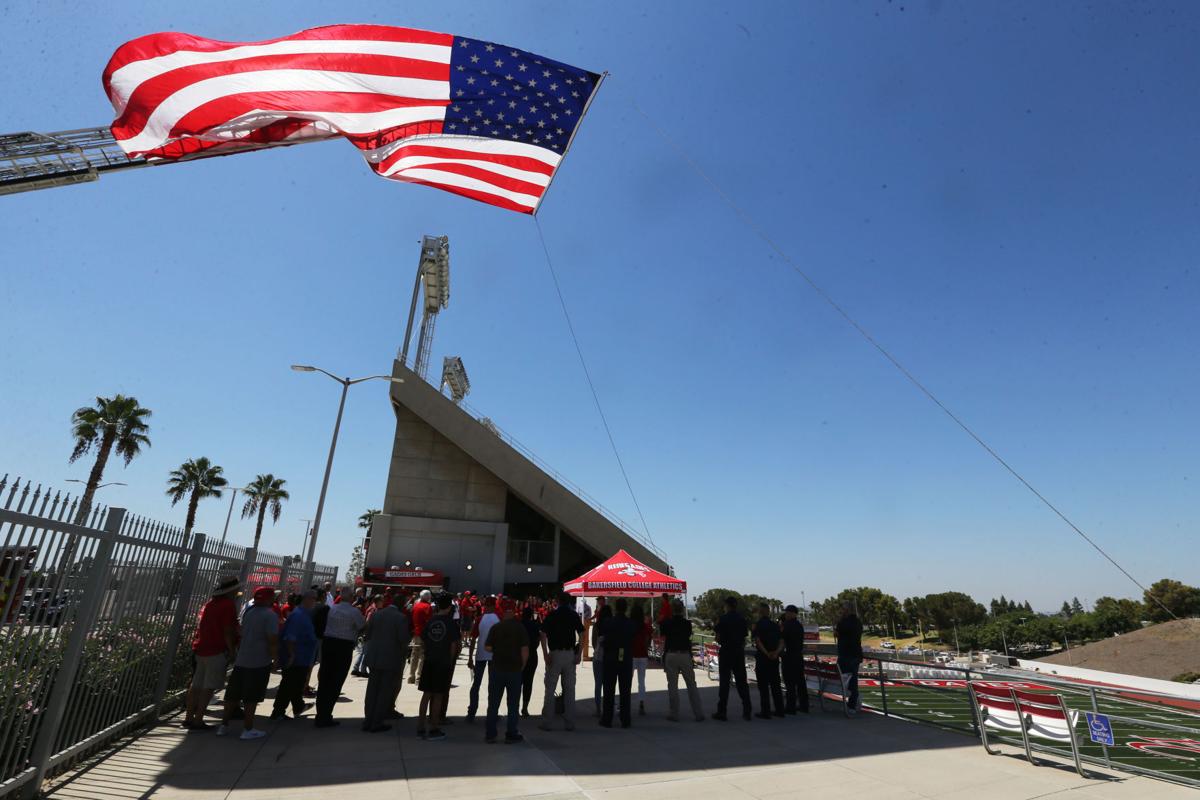 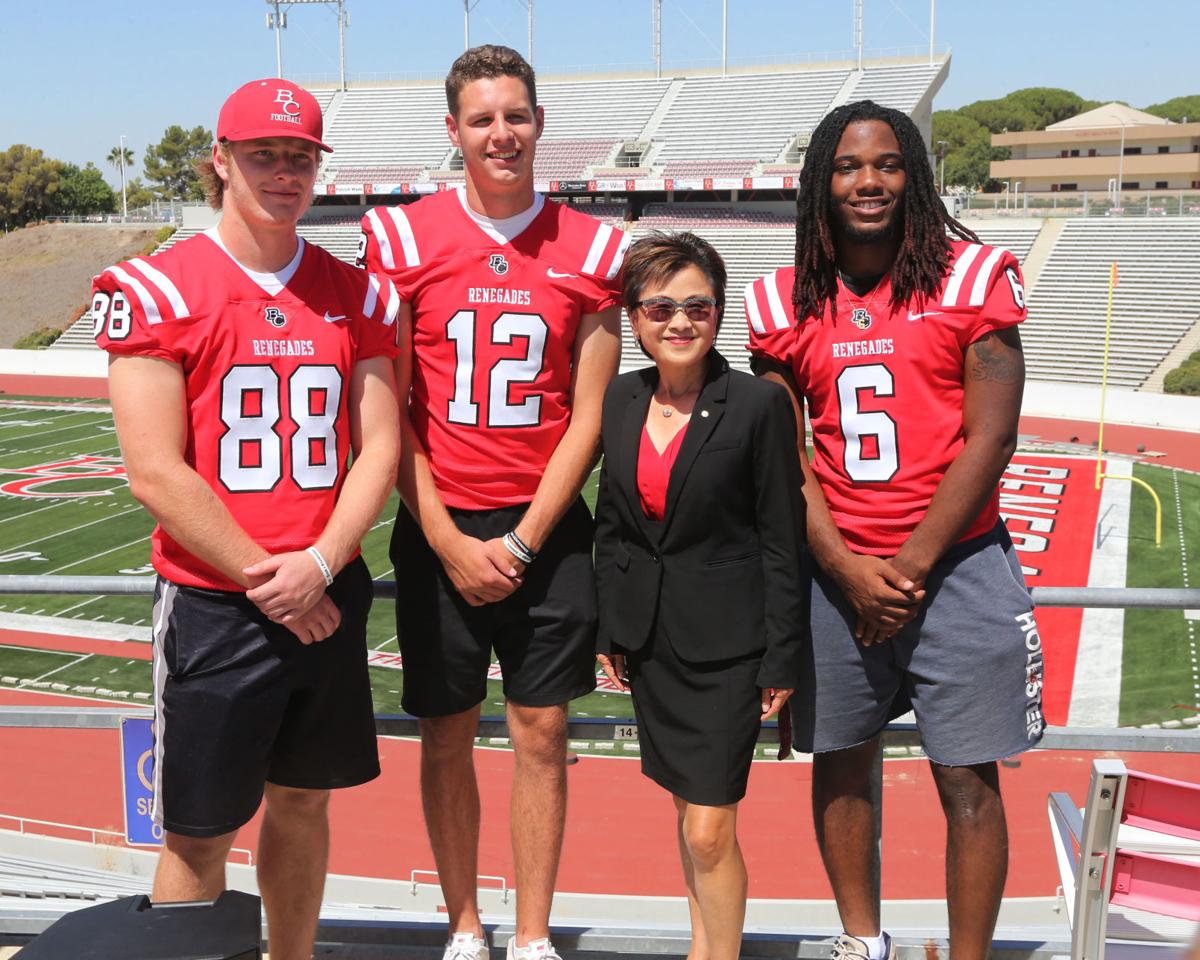 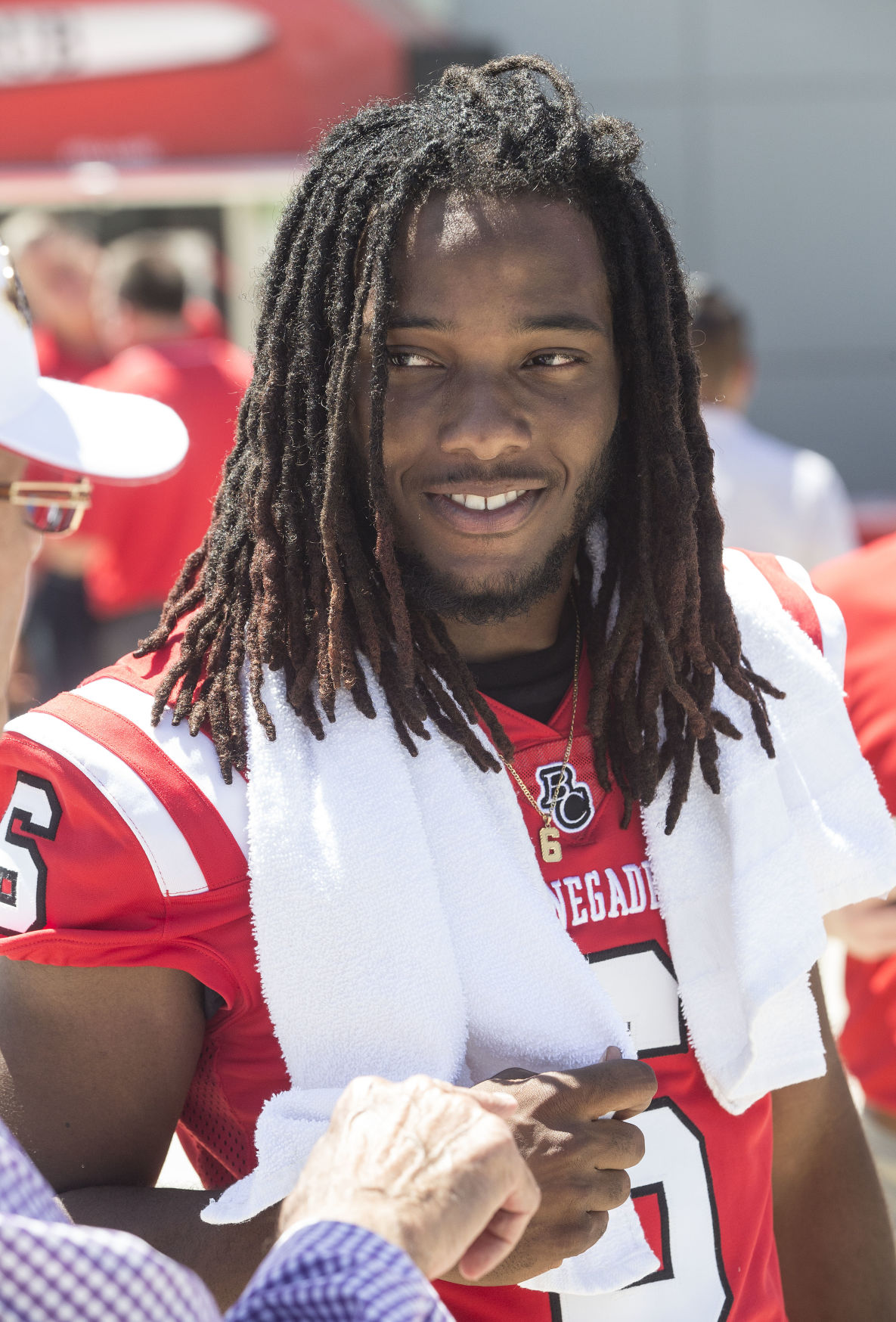 A glimpse of the new artificial turf at the stadium. Bakersfield College football hosted a media day at Memorial Stadium on Wednesday.

The subject was interceptions. "How many did he have last year?" sophomore defensive back Zach Hernandez asked, a tad incredulous about the number he'd just heard.

He was talking about Justin Harrington, a few feet away, dreadlocked and confident as he waited his turn for the Bakersfield College Renegade Football Media Day microphone.

Five was the answer. The sophomore free safety from Raleigh, N.C., picked off five opponents' passes last season, not a bad total for 11 games. And how many picks do you, Mr. Hernandez, expect to have?

"Eleven," he said, looking down at the white digits on his own scarlet-red jersey. Then, thinking better of it, with a grin: "Six."

And the game is on. Not the game against Mount San Antonio College: That's Sept. 7, as the Bakersfield College athletic department brain trust repeatedly reminded the assembled media, puddled before them under a blindingly blue mid-August sky.

No, we refer to the media-instigated, good-natured game of locker room one-upmanship that helps define those final weeks before the first contact with a set of different colored jerseys.

Hernandez, a sophomore defensive back from Centennial, may or may not surpass the interception total of his 6-foot-3, 215-pound teammate this season, but either way he'll enjoy watching Harrington make plays.

"He's crazy," he said of Harrington, who has the attention of Oregon State, Colorado, Iowa State, Virginia Tech and Houston, and they're only the ones we know about. "But he's energetic, gets down to business and works hard."

Coach Jeff Chudy, whose Renegades are coming off a 6-win, 5-loss, good-but-not-great 2018 season that ended with a 34-31 bowl game loss to host Saddleback College, hopes those traits run off on some others, too.

Everyone is undefeated this time of year, but Chudy, starting his 16th season as head coach, thinks he has something going.

"This is going to be one of the most physical, tough teams we've had — grinder guys," he said. "We've got a physicality to us. We've got a great mindset."

Sure, this is community college, where half the team turns over every season.

But Chudy likes to think he has created a culture of continuity just the same. BC, he said, is one of only two community colleges in the state with a fulltime strength and conditioning coach — Zack Peters, who came to Bakersfield from UCLA. Facilities like newly renovated Memorial Stadium and personnel additions like Peters help create a sense of stability and community within the athletic department that provides a counterweight to the changing nature of a two-year program.

"Makes it easy to assimilate into a culture that's already there," Chudy said. "We've got a great vibe here, a great energy."

And not all that far to go, really. The Renegades lost a couple of late leads last season and, but for five lousy points, could have been 8-3.

This season they'll put it in the hands of Braden Wingle, a greyshirt freshman quarterback from Bakersfield Christian High School who, at 6-5 and 210 pounds, looks the part.

"That's my dude right there," said Harrington, the free safety. "He stands tall in the pocket, has the confidence. He can be that leader."

Sophomore running back Shane Jones, a Bakersfield High School graduate, will hear his name over the public address system a few times, as will Zach Hartsfield, a big tight end from Centennial.

Harrington expects sophomore slot receiver Cole Beatty, a transfer from Northern Arizona, to make some noise along with freshman wideout Victor Boggs, a North grad, and particularly LaBrevon Austin, a sophomore wide receiver from Garces. "He's shifty," says Harrington, who faces them all in practice every day. But who gives Harrington the most trouble in practice? Probably sophomore Adarian Rowel of Stockdale High, he says.

Shifty is good in a wideout. Big is good in a lineman, and Chudy says the 'Gades have plenty of that to go with the physicality.

Do not mistake these dimensions for members of the Oakland Raiders: Eaamon Sullivan is 6-foot-4 and 278 pounds; Cayden Cox goes 6-6, 300; Josh Yubeta is 6-4, 305; and Holden Williams, "one of the tougher guys on the team," Chudy says, goes 6-3, 280. Taylor Nylander leads an influx of large freshmen.

Among the defensive leaders are strong safety Demarcus Aaron and nickel back Fano Maui.

Chudy will have a better idea of what he really has after Thursday's practice. The Renegades just completed their third day of practice in helmets, and on Thursday they go in full pads for the first time.

"They're sort of a nemesis," Athletic Director Sandi Taylor said of Mt. SAC, which handed the Renegades their worst loss of the year last September, a 45-24 pummeling on the road in the season opener. "We want to knock their socks off."

Season tickets, which range from $35 to $60, are available online at Vallitix.com, by phone at 322-5200 or in person at the Bakersfield College business office.

The real star of BC football media day? That new turf

Bc should be for academics instead of high school jocks looking for one last blast of glory who couldn’t make college football. Stop wasting tax money on this. No one even goes to the games

It IS college football, and more go to their games than any other California JC.

They ARE playing college football, you moron.

I'm sure you lettered on the typing team in high school, so all wasn't lost when you couldn't make the football team...

Excited! We have some size on the O line for a change! We'll be up there sweatin on Sept 7. But not as much as the players! Go Gades. Bakersfsfield'd ONLY college football team. Support it!

Size AND physicality is a nice combo. A tall QB throwing over big O linemen sounds good. Mt. SAC will, as usual, be a huge test. As if having over 40,000 students and all of Orange county to choose from, they still get 25 out of staters a year. A win in that game would promise a solid season.