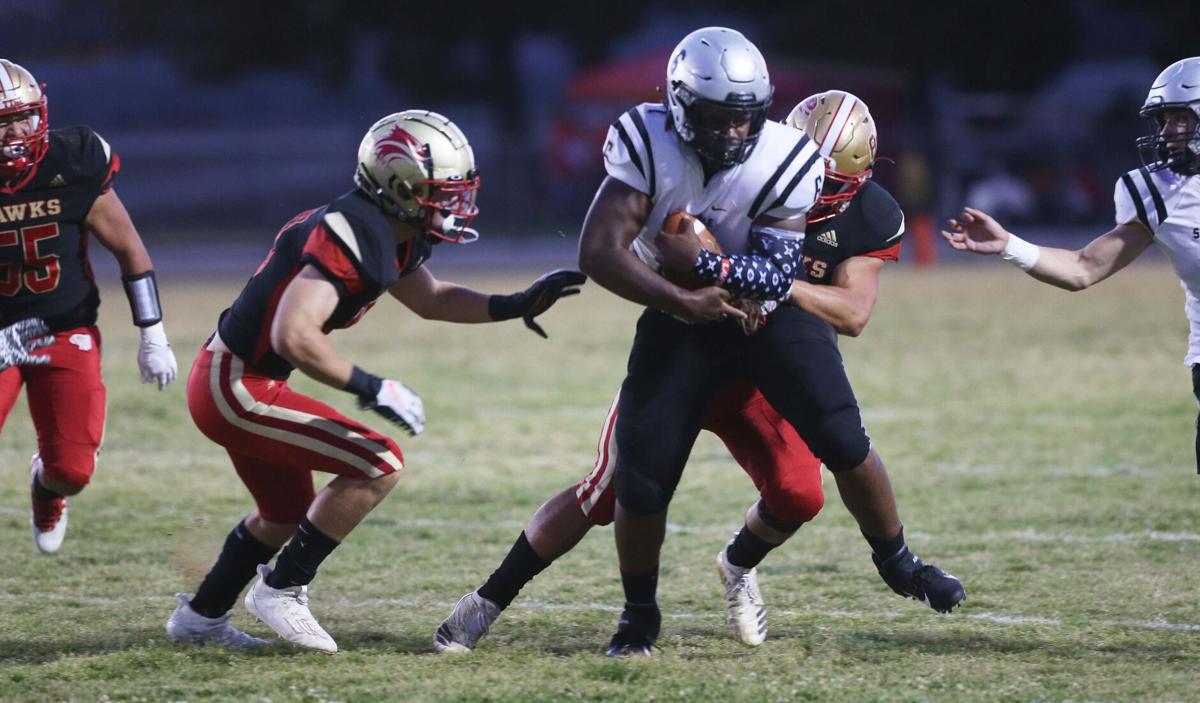 Stockdale's Larry Brown is tackled in the secondary while taking on Centennial April 9. 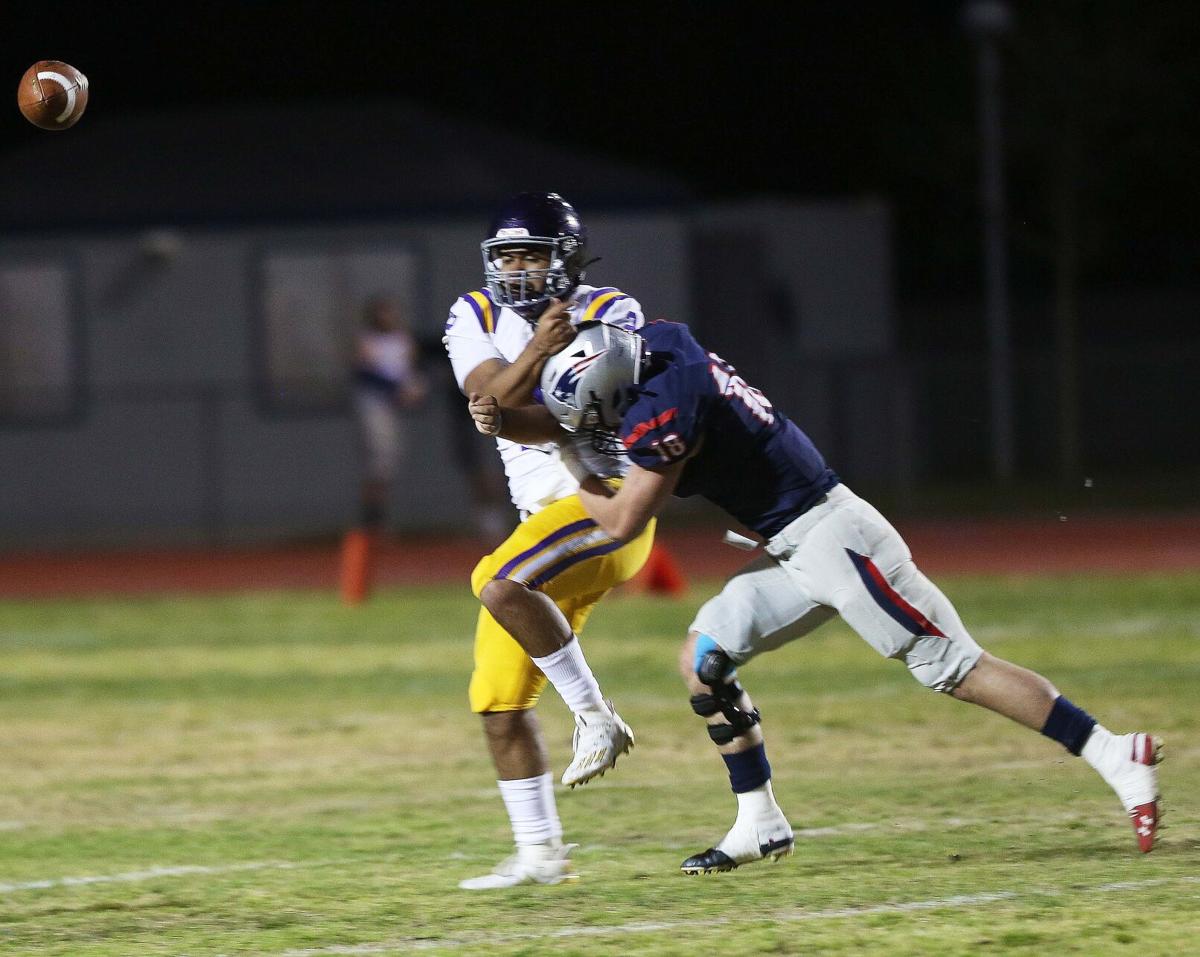 Ridgeview quarterback Marcus Level just gets the ball off before being hit by Liberty defender Randon Reeder on March 26. 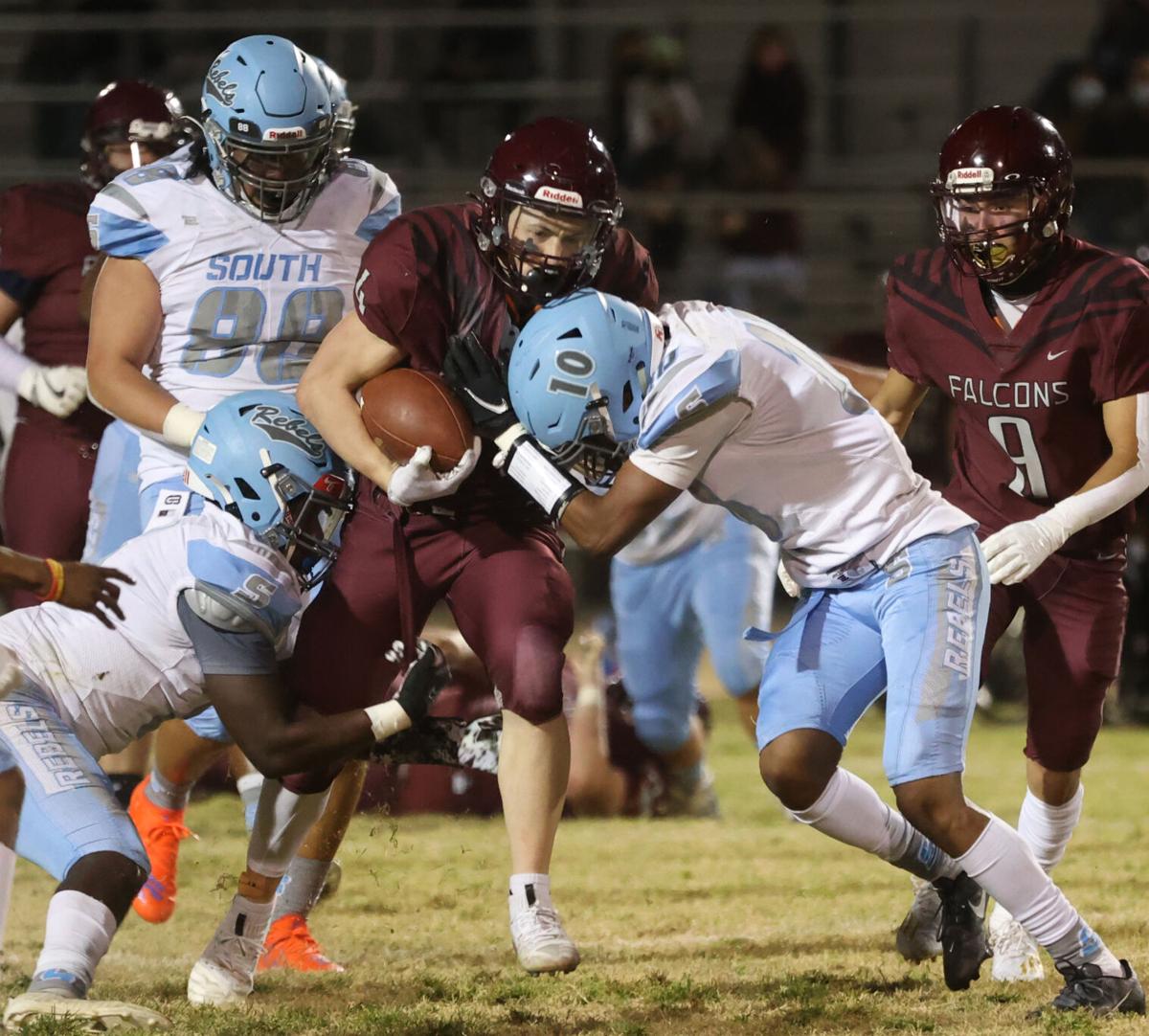 Independence running back Evan Peaker runs into a pair of South tacklers in a March 26 game.

Stockdale's Larry Brown is tackled in the secondary while taking on Centennial April 9.

Ridgeview quarterback Marcus Level just gets the ball off before being hit by Liberty defender Randon Reeder on March 26.

Independence running back Evan Peaker runs into a pair of South tacklers in a March 26 game.

In a typical season, high school football teams are beginning to hit their stride in Week 4. The start of league play is just around the corner and team’s personalities are starting to be revealed.

But in this sprint of a season, players and coaches have been forced to amp things up a bit, with the prospect of next week’s regular-season finale and a possible “Bowl Game” on April 30.

With that in mind, there are several intriguing matchups this week. For some it means lining up against a rival, for others it’s a quest to remain unbeaten or get that elusive first win.

Five area teams are still perfect, including Bakersfield High (1-0), which missed the last two weeks while working through COVID-19 health and safety protocols. Three other teams are looking for their first wins.

Here’s a look at Friday’s schedule:

In what has become one of the more interesting rivalry games in recent years, the area’s two private schools will meet at Tobias Field. The Eagles, fresh off a 42-22 loss to Santa Barbara-Bishop Diego, are super young, but talented. With the loss of several key players to graduation from last year’s CIF state championship team, BCHS has had to rely on several underclassmen. Perhaps the most talented is sophomore Kresean Kizzy, who has five touchdowns in two games this season, including a 95-yard interception return for a score last week. The Rams, playing the toughest schedule of any area team, will be playing against its only local opponent of the season following losses to La Canada-St. Francis, state-ranked Chatsworth-Sierra Canyon and Palmdale-Paraclete. With an abundance of NCAA Division I talent, including junior running back Ian Jernagin, who rushed for 168 yards last week, Garces is looking to snap a three-game skid. Quarterback Travis Plugge is questionable with a hand injury, suffered in a 34-6 loss at Paraclete last week.

The Generals look to keep rolling when the road warriors travel to face the Lions. With Shafter’s football stadium under reconstruction, that’s nothing new for a team that has outscored its first three opponents 149-9 this season. It all starts with junior quarterback Tyson Dozhier, who has thrown for 930 yards and 17 touchdowns — in three games. His favorite targets, Cameron Huerta and Devon Sundgren, have combined for 32 receptions, 799 yards and 13 scores. Defensively, the Generals are led by Olaniyan Tatum, Colby Miller and Dom Torres on a team that has 12 sacks, four interceptions and a fumble recovery. Mira Monte is a late two-point conversion away from being undefeated. The Lions lost to unbeaten Golden Valley 16-15 in overtime in Week 2. Mira Monte likes to pound the ball on the ground, and with multiple backs. Five players have at least 100 yards rushing this season. In last week’s 24-14 victory over Arvin, Miguel Lara rushed for a team-high 116 yards. The passing game has also been efficient with senior Sebastian Marbaugh under center. He had a 13-yard scoring pass in the loss to Golden Valley and another to Vic Hernandez (78 yards receiving) last week.

The inconsistent Trojans offense will look to get back on track when they host the Broncs at Ned Permenter Stadium. Foothill has scored just six points total in its two losses, with a 33-point outburst wedged in between during a victory over Arvin. The Trojans rely heavily on their rushing attack, powered by a trio of juniors — fullback Kaelan Deloney and tailbacks Tyson Reynolds and Eric Faria. Kern Valley lost to Mira Monte in a season-opening 41-32 shootout, but has been held scoreless the past two weeks in losses to undefeated Golden Valley and Shafter.

The Bulldogs have proven to be a complete team this season on both sides of the ball, winning a pair of low-scoring affairs to open the year and then opening things up en route to a 46-0 win over Kern Valley last week. Senior quarterback Marquel Bruley threw two touchdown passes in the victory and has combined for 385 yards passing and rushing this year. Senior Iziah Coronado leads the ground attack with 359 yards and two scores. He has eclipsed the 100-yard plateau in two of his three games this season and had a 77-yard run last week. The Bears have continued to battle despite having a limited number of bodies in uniform this season. The Bears suited up just 20 players in a 33-6 loss to Foothill two weeks ago, and have lost a few to injuries since. Despite the limited numbers, Arvin continues to receive strong performances from senior lineman Enrique Rangel — a three-year starter — and defensive standout Jose Villa.

One of the best matchups this week. The Scots are looking to bounce back after a 26-21 loss to Independence last week. Highland senior AJ Cleveland is one of the top quarterbacks in the area. He threw three touchdown passes and ran for another in a 63-21 victory over West in Week 2, and had three scoring passes in the opener, a 28-20 victory over North. The Rebels have responded well the past two weeks after losing to Golden Valley 6-0 in their opener. South senior quarterback King Ellis rushed for 155 yards and two touchdowns on just four carries in last week’s 35-13 victory over West. Tyrone Wilson and DeeShawn Brown also had rushing touchdowns, and Damareah Wafford returned a fumble 65 yards for a score.

The Falcons opened the season 0-5 last year — part of an eight-game skid over two seasons — but find themselves undefeated four weeks into this season. Quite a turnaround, and Evan Peaker has played a huge role in Independence’s emergence. The junior running back rushed for 220 yards and two touchdowns in the Falcons dramatic 26-21 victory over Highland last week. The Blades are looking to rebound after a hard-fought, 17-14 loss to North, losing on a 43-yard field goal in the final seconds. East scored its touchdowns on a 60-yard interception return by Johnathan Patino and a 1-yard run by Johnie Salazar.

The Stars are looking to build on the momentum from last week’s dramatic 17-14 victory over East, with sophomore kicker Evan Siffing nailing a game-winning 43-yard field goal in the final seconds. North rallied from an early 14-0 deficit, with touchdowns by Xavion Foreman and Alex Ruvulcaba. Mar Kai Shaw led North with 115 yards rushing on 19 carries. The Vikings are looking to get on track following a pair of lopsided losses to Highland and South. West lost a heartbreaker in its season-opener, 23-21 to East. Junior quarterback Dalon Leach has been the most consistent player for the Vikings this season, combining for 567 yards and seven touchdowns passing and rushing this season.

The Patriots showed a lot of grit last week. After blowing a 17-0 lead, Liberty recovered to post a 23-19 victory over Frontier. Prentice Boone scored the go-ahead TD on an 11-yard run and finished with 138 yards rushing and two scores. Senior quarterback Haden Mann, who doubles as a powerful runner and effective passer, also scored a rushing TD for the Patriots, who had outscored its first two opponents 87-20 this season. The Mustangs suffered a tough 20-14 loss at Centennial in its first game of the season last week. The Mustangs were in COVID-19 protocols the first game of the season and then had their Week 2 game canceled when BHS suffered a similar experience. Stockdale was able to move the ball last week with quarterback Jose Saenz, fullback Jaykob Jones, speedy Darius Larsuel and receivers Jayden Hollis and Larry Brown playing key roles. But turnovers and penalties proved too much to overcome. With another week of practice under their belt, the Mustangs figure to only get better.

Another intriguing matchup. The Golden Hawks, who posted their first win, 20-14, over Stockdale last week, rely on several underclassmen that figure to improve with each game. Junior Levi Manning is expected to be one of the better quarterbacks in the area and he has plenty of talented receivers to throw to. Centennial also received strong contributions from senior Anthony Barajas (two TD runs) and sophomore Noe Estrada, who had a big 46-yard punt return to set up a Golden Hawks touchdown last week. The Wolf Pack’s scheduled game against BHS was canceled last week due to COVID-19 protocols, but its plan of attack doesn’t figure to change much — featuring a steady dose of Jaron Amos. The senior running back, who grew three inches in the offseason and now stands 6-foot-5, has rushed for 312 yards and two touchdowns in two games this season. He demonstrated his ability to break off long runs in a season-opening loss to Liberty and again the following week in a 19-14 loss to Frontier.

The Titans rallied and had Liberty on the ropes last week, before the Patriots recovered to post a 23-19 victory. After skipping the first week of the season while Stockdale was on COVID-19 protocols, Frontier has proven to be one of the better teams in the area with a close win over Ridgeview and last week’s narrow loss to the perennially-strong and undefeated Patriots. Whether that loss gives the Titans the confidence to get a win this week at Griffith Field remains to be seen. Frontier quarterback Vincent Igoa has been one of the team’s most consistent offensive performers. He had a 40-yard touchdown pass to John Appleton to give his team a 19-17 lead over Liberty in the fourth quarter. The Drillers looked strong early in their only game of the year, building a comfortable lead before needing overtime to defeat Centennial 37-30. But BHS hasn’t played a game in three weeks due to COVID-19 protocols. Senior Ayden Moreno threw three touchdown passes in BHS’s victory over Centennial and the Drillers showed plenty of offensive balance, passing for 198 and rushing for 189, with eight different backs carrying the ball. Sophomore Tybo Rogers had three catches for 121 yards and two touchdowns.