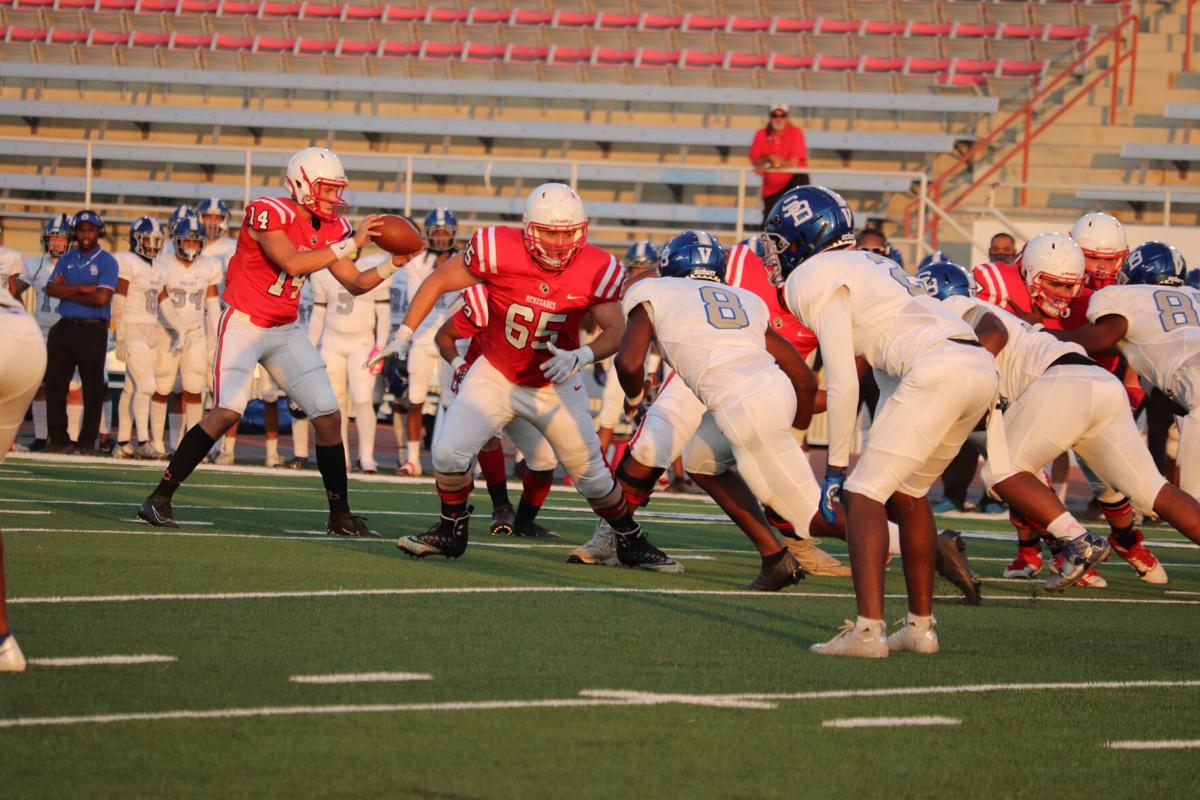 BC quarterback Dexter Frampton takes a snap during the Oct. 2 game against San Bernardino Valley College. 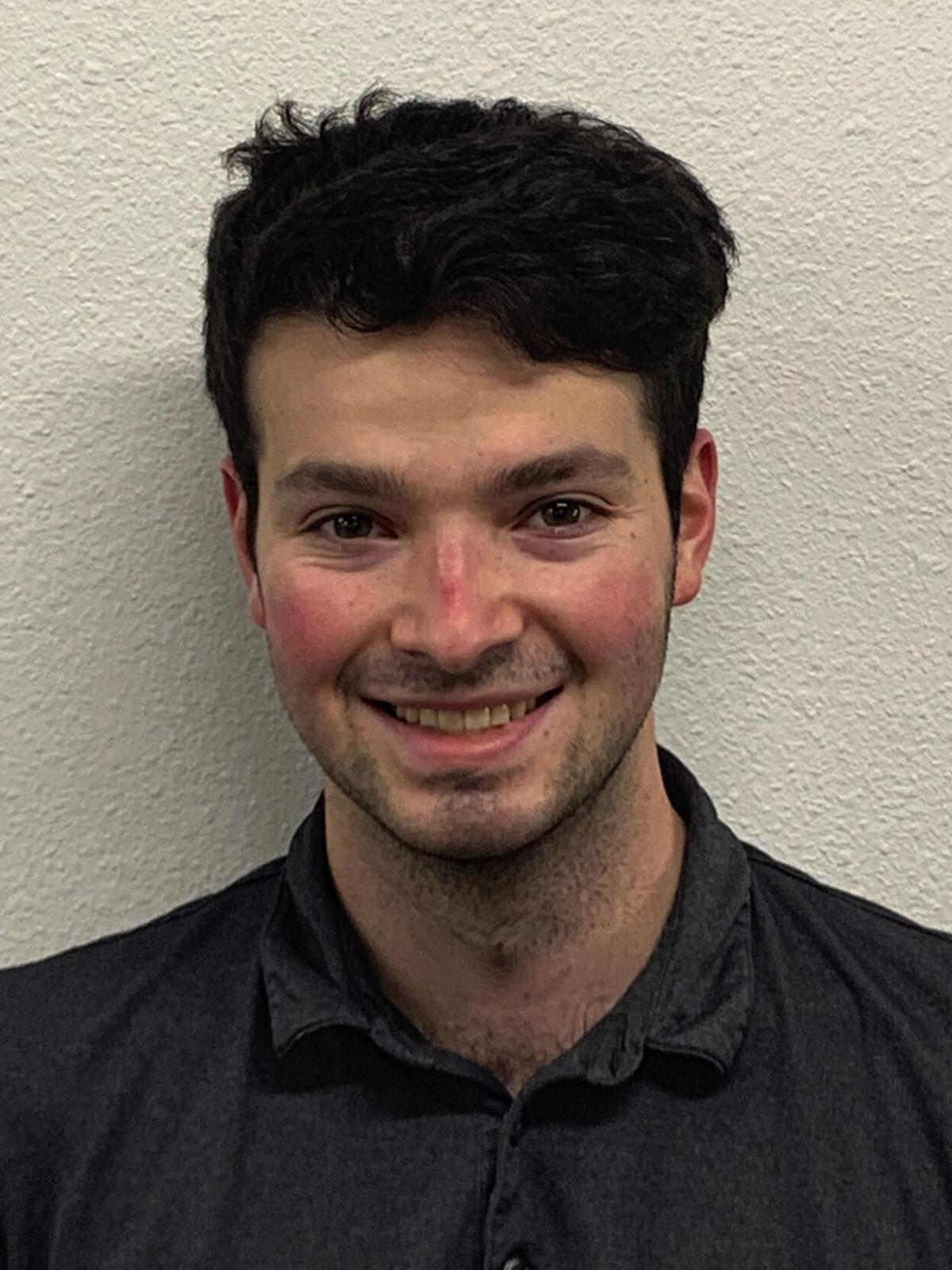 BC quarterback Dexter Frampton takes a snap during the Oct. 2 game against San Bernardino Valley College.

Believe it or not, the Bakersfield College football regular season is halfway done.

It feels like the year just began — and did so with such great excitement, after the team missed 2020 due to the pandemic, then won its opener by forfeit — but suddenly the Renegades are 4-1 with five games to go in their first season under R. Todd Littlejohn.

The team was unranked early but as of Monday sat at No. 8 in both California Community College Athletic Association polls. The Renegades come in below a Golden West team that they beat — with some luck — for their second win and a Mt. San Antonio squad that has played just three games in six weeks, one a rout of BC, due to postponements.

The degree of difficulty ramps up Saturday as BC opens conference play against No. 4 College of the Canyons for Homecoming. The Renegades then travel to face Ventura (No. 3 in one poll, No. 2 in the other). Long Beach and East Los Angeles should be somewhat easier foes, before the Renegades conclude the regular season with a matinee at Allan Hancock.

As we look ahead to that wide-ranging second-half schedule, it’s the perfect time to evaluate the Renegades’ performance thus far.

The Renegades have used three quarterbacks through four (non-forfeited) games. The steady Garrett Castro hasn’t played since leaving with an injury at Golden West. East High graduate Richard Lara, who threw a touchdown in relief in that game, has settled into a backup role. Instead, the de facto starter is Dexter “DJ” Frampton, who got off to a disastrous start with three first-half picks at Mt. SAC, but dissected the San Bernardino Valley defense one week later, recording 270 yards and three touchdowns. The second half of the season will reveal the extent to which Frampton’s performances start to regress to the mean.

The Renegades need Frampton to excel because their rushing attack has been ineffective. BC hasn’t posted more than 79 yards rushing in a game. Antonio Robinson, the workhorse for three games, averages three yards per carry. BC quarterbacks have also been sacked 20 times this year, which counts against rushing yardage. In short, offensive line play will need to improve dramatically if the Renegades want to go blow-for-blow with the offenses of teams like COC and Ventura, which both average over 450 total yards per game.

The Renegades do have some dynamic weapons on the offensive end. Garces graduate Isaac Jernagin has shown top-notch speed and route-running as a receiver (17 receptions, 270 yards, one touchdown) and has also run for two touchdowns out of the backfield. And Frontier graduate Jayden Smith, the rarely used tight end, may have just broken out with seven catches for 104 yards and a touchdown against SBVC — let’s see if he can replicate it against better defenses.

Sophomore linebacker and Ridgecrest graduate Brock Mather has been a force on defense for the Renegades, recording 40 tackles with two sacks and a forced fumble. He helped the Renegades pour it on against SBVC with a second quarter pick-six.

Overall, though, the defense has struggled to generate takeaways. Prior to its three-interception performance in the SBVC blowout, it recorded just one fumble recovery and one interception through the first three games. The low interception number was particularly surprising considering how effective BC’s pass defense has been all year, allowing just 181 yards per game. The uptick against SBVC, a credit to Mather, Ashton Thomas and Centennial graduate Morgan Dutton, suggests some added confidence in the defensive backfield that will be needed going forward, as the Renegades’ turnover margin sits at 0 despite their winning record.

Run defense has been the most obvious issue. The Renegades have allowed 100-yard rushers in three of four games, a problem most clearly exemplified by a 94-yard run the team surrendered in garbage time to Mt. SAC’s Keoua Kauni. Even in BC wins the Renegades’ opponents’ standout performers have been running backs, like El Camino’s Stephen Bradford Jr. Much of the responsibility here falls on BC’s defensive line — a pretty anonymous group thus far this year — to help get better containment at the line of scrimmage and curb these performances.

It’s hard to overstate the dominance of BC’s special teams units this season. Littlejohn has a lengthy resume of special-teams coaching, and his experience shines through when the punt block units, led by Liberty graduate Dylan Tooker, get penetration on virtually every kick or the kick return units open space for Jaylen Blizzard when the team needs a big return.

It’s not a stretch to say that the Renegades owe their wins against El Camino and Golden West to special teams. Against the Warriors, Tooker blocked a punt, Blizzard returned a kickoff for a touchdown, and BHS graduate Isaiah Jernagin blocked a short field goal. Against the Rustlers, Tooker got another block and Blizzard had a 57-yard return — plus Golden West failed on an extra point and a possible game-winning field goal. In the two games since, Tooker has added a third block and Blizzard a second touchdown.

Of course not every aspect of BC’s kicking game has been perfect. Garces graduate Peter Delis has missed two field goals and Stockdale graduate Duane Hartman had his third punt of the season blocked for a safety. But on the whole, it’s been impressive how much quicker the Renegades’ units have looked than their opponents’. Don’t be surprised if special teams decide another result or two in conference play.

BC’s dominant performance against SBVC showed what the Renegades are capable of when firing on all cylinders, rather than sputtering on offense and getting saved by special teams. The key to the second half of the season is to carry that same sort of offensive and defensive intensity into games against much more skilled opponents. It’ll be a tough test, and we’ll soon see if the young team is up for it.