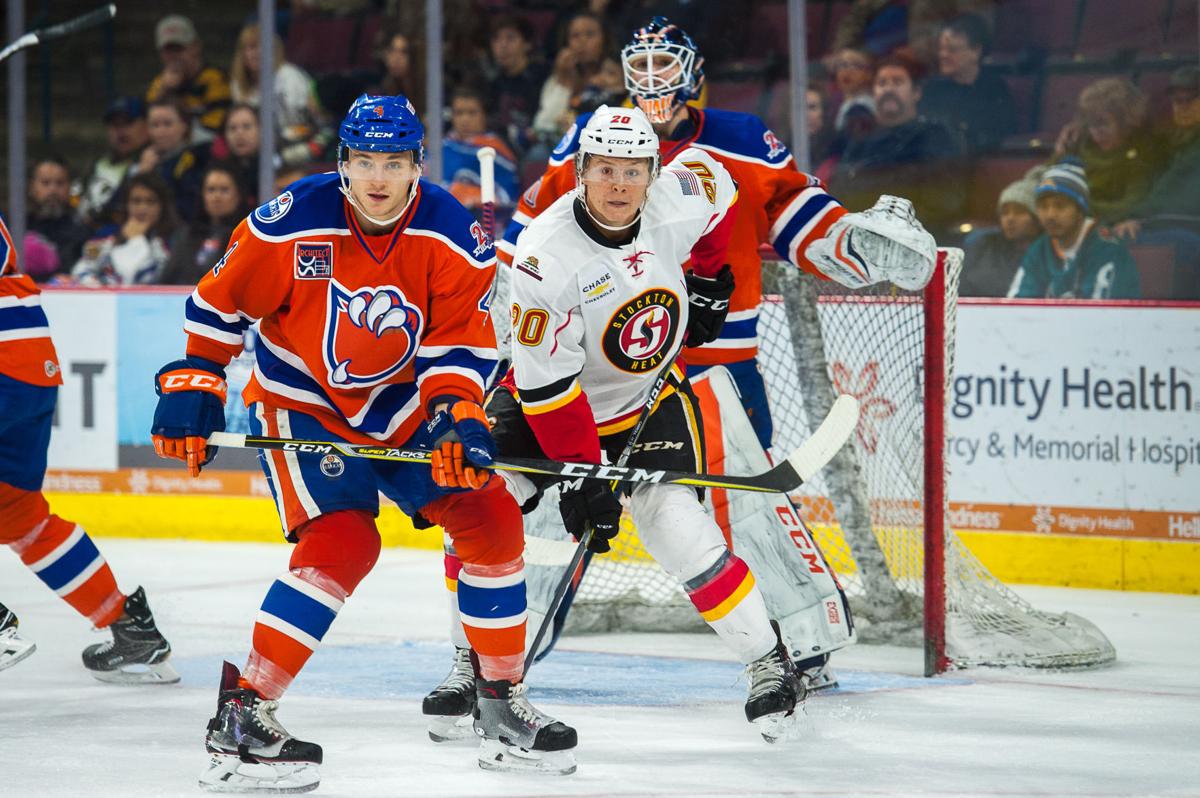 Keegan Lowe sets up in a defensive position in front of the Condors net during a game against Stockton last season. The Condors will host the Heat in their 2018-19 home opener at Rabobank Arena. 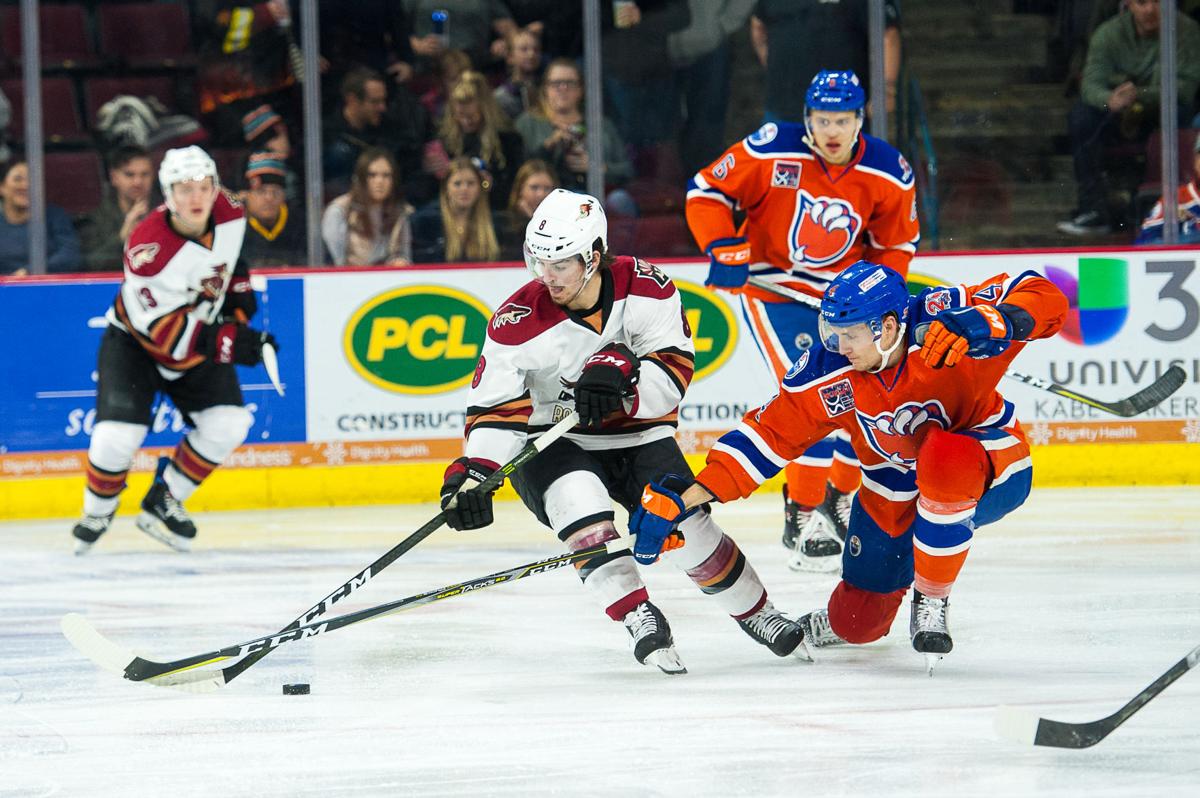 Keegan Lowe battles for the puck with Tucson's Condor Garland on Friday night at Rabobank Arena. 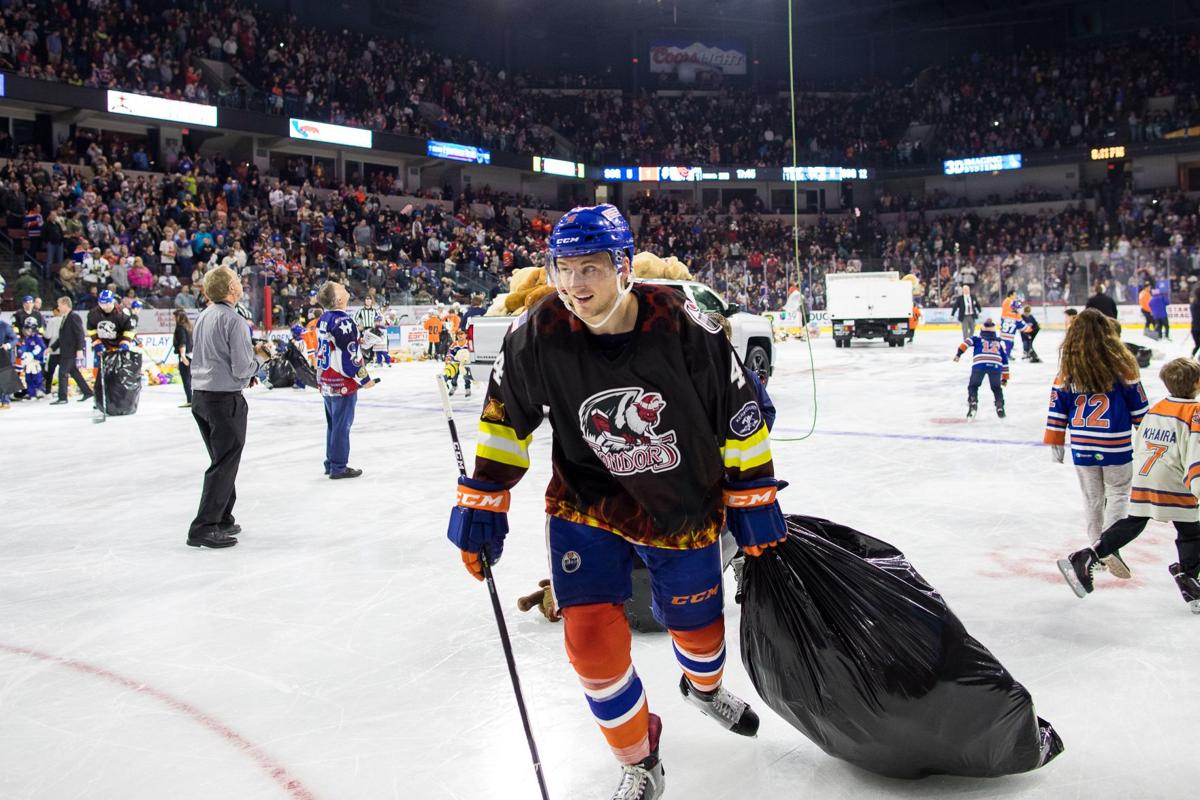 Keegan Lowe is all smiles as he hauls a bag full of stuffed animals off the ice during the annual Teddy Bear Toss Game at Rabobank Arena. 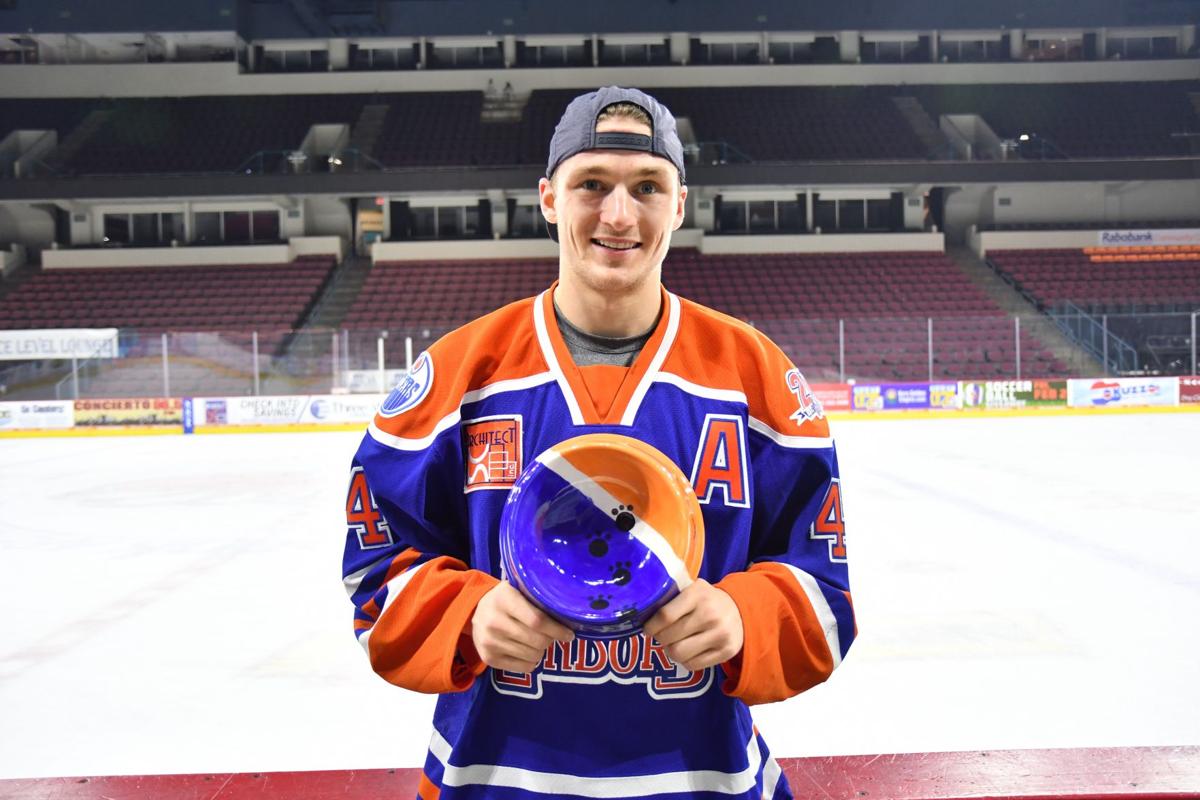 Keegan Lowe shows off the dog bowl he painted for Pet Awareness Night on Jan. 12 at Rabobank Arena. Bowls painted by Condors players will be auctioned off to benefit Kern County Animal Services.

Keegan Lowe sets up in a defensive position in front of the Condors net during a game against Stockton last season. The Condors will host the Heat in their 2018-19 home opener at Rabobank Arena.

Keegan Lowe battles for the puck with Tucson's Condor Garland on Friday night at Rabobank Arena.

Keegan Lowe is all smiles as he hauls a bag full of stuffed animals off the ice during the annual Teddy Bear Toss Game at Rabobank Arena.

Keegan Lowe shows off the dog bowl he painted for Pet Awareness Night on Jan. 12 at Rabobank Arena. Bowls painted by Condors players will be auctioned off to benefit Kern County Animal Services.

To the average Condors fan, Keegan Lowe might be the invisible man.

As a defensive-minded defenseman, you won’t see him making end-to end runs with the puck, you won’t see him at the point on a power play firing slap shots and, generally speaking, there’s nothing flashy about his play that would catch your eye.

But one look at the stat sheet will tell you that Lowe is doing a lot of good things.

The fifth-year pro leads the Condors in the plus/minus category at a plus 11, four better than his closest teammate. He’s also chipped in offensively with five points (2g, 3a) in 21 games

“You don’t notice it, but he does a lot of subtle things with and without the puck that unless you really, really focus on his game you wouldn’t notice,” said Condors coach Gerry Fleming. “But that’s a good thing sometimes when you don’t notice a player like Keegan. He’s not going to wow you with his offensive prowess but he does get opportunities, he does get looks at the net.

“He’s a solid penalty killer, he blocks shots, competes, plays hard, boxes out and his gap control is outstanding.”

In short, being good defensively is Lowe’s No. 1 priority.

“That’s kind of the way I’ve played my whole life,” Lowe, 24 said. “If you’re not getting noticed it’s usually a good thing. After a while someone will notice you’re not making mistakes and you’re defending well.

“I don’t play a fancy game. I don’t play a picturesque highlight-reel game. But I love defending and penalty killing. Penalty killing is one of my favorite things to do in hockey. Killing off a big penalty at the end of the game is just as exciting to me as scoring a big goal.”

Lowe, (6-foot-2, 195 pounds) is the son of Kevin Lowe, who won five Stanley Cups with the Edmonton Oilers and has served in various capacities with the Oilers including coach and general manager.

“I bled those colors when I was a kid,” Keegan Lowe said.

He played juniors for the Edmonton Oil Kings but when it came time for the NHL draft in 2011, the then 18-year old told the Oilers he wanted to be drafted by another team.

“It got to the point where I really wanted to prove myself on my own (no nepotism) when it came to the draft,” Lowe said. “The (Oilers) scouting staff had approached me and said they were interested but wouldn’t even put me on the list if that wasn’t wish of mine. I made that decision on my own, that I wanted to pave my own way. I’m happy with the decision I made.”

Lowe was drafted in the third round by the Carolina Hurricanes and, with the exception of two NHL games in the 2014-15 season, played for the Charlotte Checkers in the AHL until being traded to Montreal late last season and finishing up with Montreal’s AHL affiliate, the St. John’s Ice Caps.

He signed a one year deal with Edmonton last summer and has been with the Condors since training camp.

“It’s cool to put on the (Oilers) colors, for sure,” Lowe said. “I went to every home game as a kid and would be in tears when they lost. I’m just looking to make the next step in my career and it’s a good fit for me.”

Fleming said Lowe has improved tremendously since his first couple of years in Charlotte.

“I’ve seen Keegan since his first years with Charlotte and the growth in his game from where he started to where he’s at now is night and day,” Fleming said. “There’s nobody that’s going to work harder in the gym or off ice training than Keegan. (That work) has made improvements in his game.

“He makes better reads, he moves the puck more, his puck handling skills have improved, his stick positioning is better. He’s more controlled in his game than when he first started, that’s for sure.”

While he has not given up hope of someday making to the NHL, Lowe understands that a good part of his role in Bakersfield is to help mentor three rookie defensemen.

“I’m not an old guy, but I’m not a young guy,” he said. “I want to help the guys like Caleb Jones, Ethan Bear and Ryan Mantha transition to the pro game. It takes time to adjust. Ask anybody in the room, especially the first-year guys. It’s a big step.”

Fleming said Lowe has excelled in his role as a leader and has been a boost to Jones since the two have recently been paired together.

“Ever since we’ve put him with Caleb, it’s helped Caleb’s plus/minus,” Fleming said. “For Jonesy, playing with Keegan has really slowed the game down in his mind a lot. You want guys to play at pace, you want guys to play with high intensity but at the same time you’ve got to be calm in your mind because if you panic your vision starts to shrink. You have to play a high pace game but your mind always has to be controlled. I think Keegan helps Jonesy with that.”

For his part, Lowe just wants to continue to improve and do all he can to help the team win.

“I just want to work hard every day, do the little things right and always play that steady game,” he said.