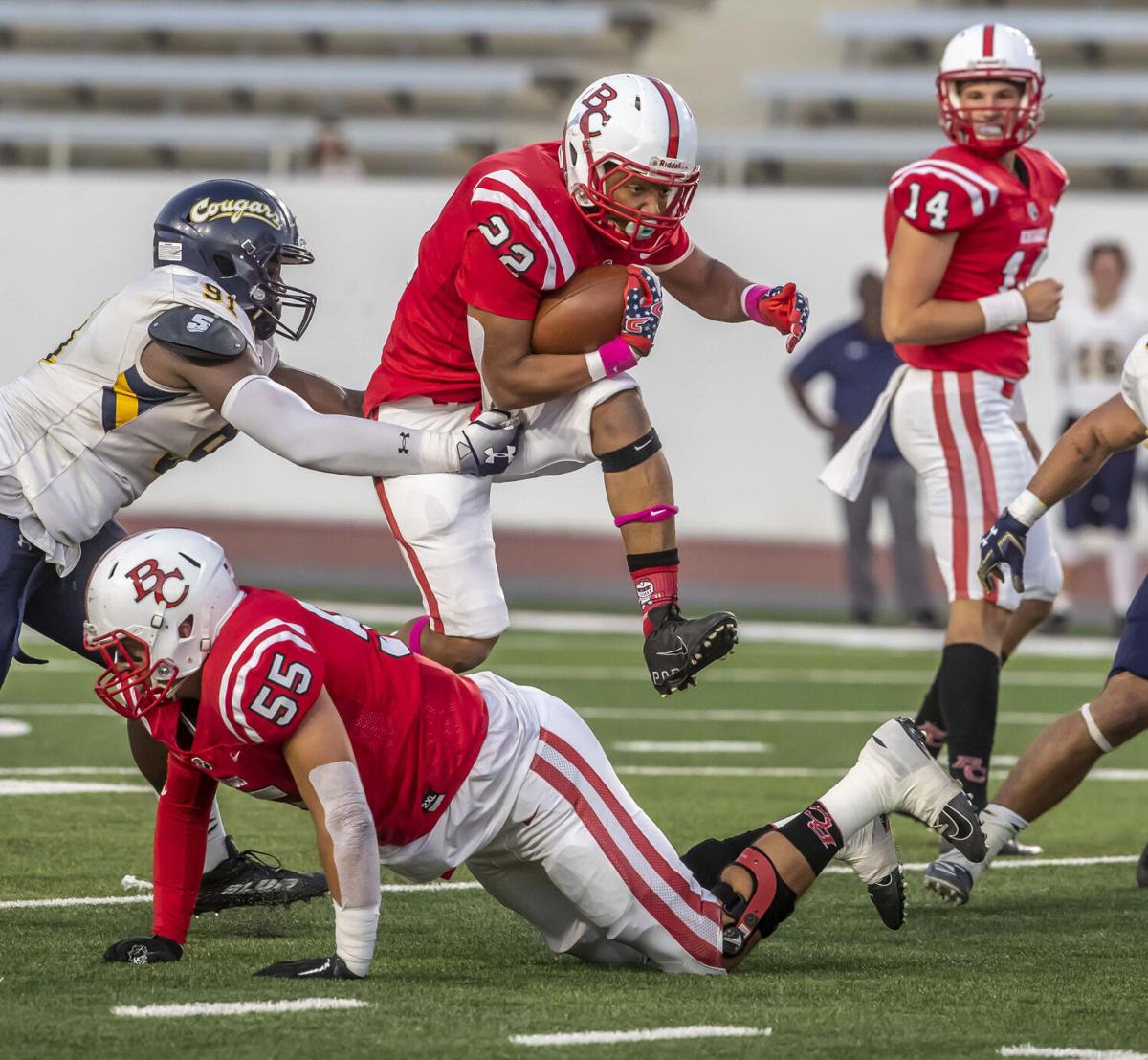 Bakersfield College running back Antonio Robinson hurdles to avoid Canyons defender Dajour Dixon during the first half of Saturday's game at Memorial Stadium. 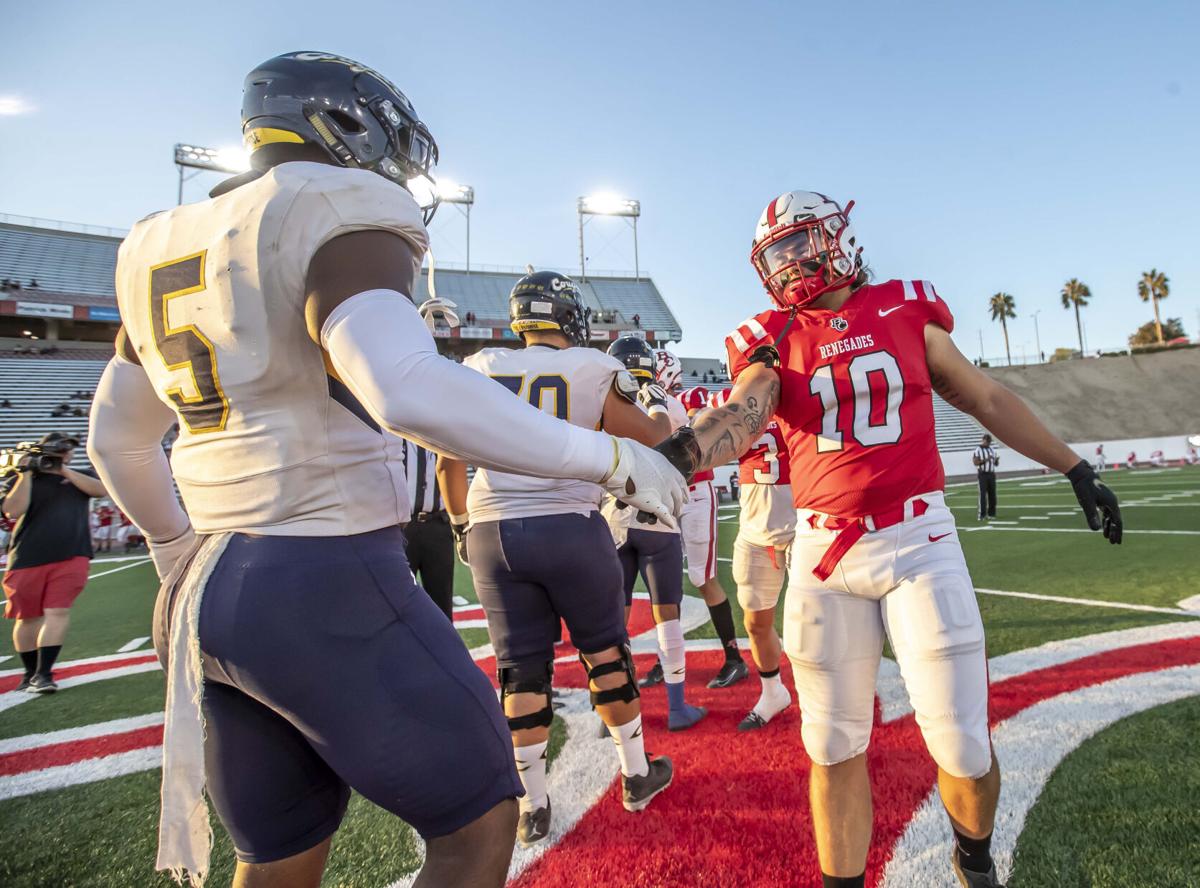 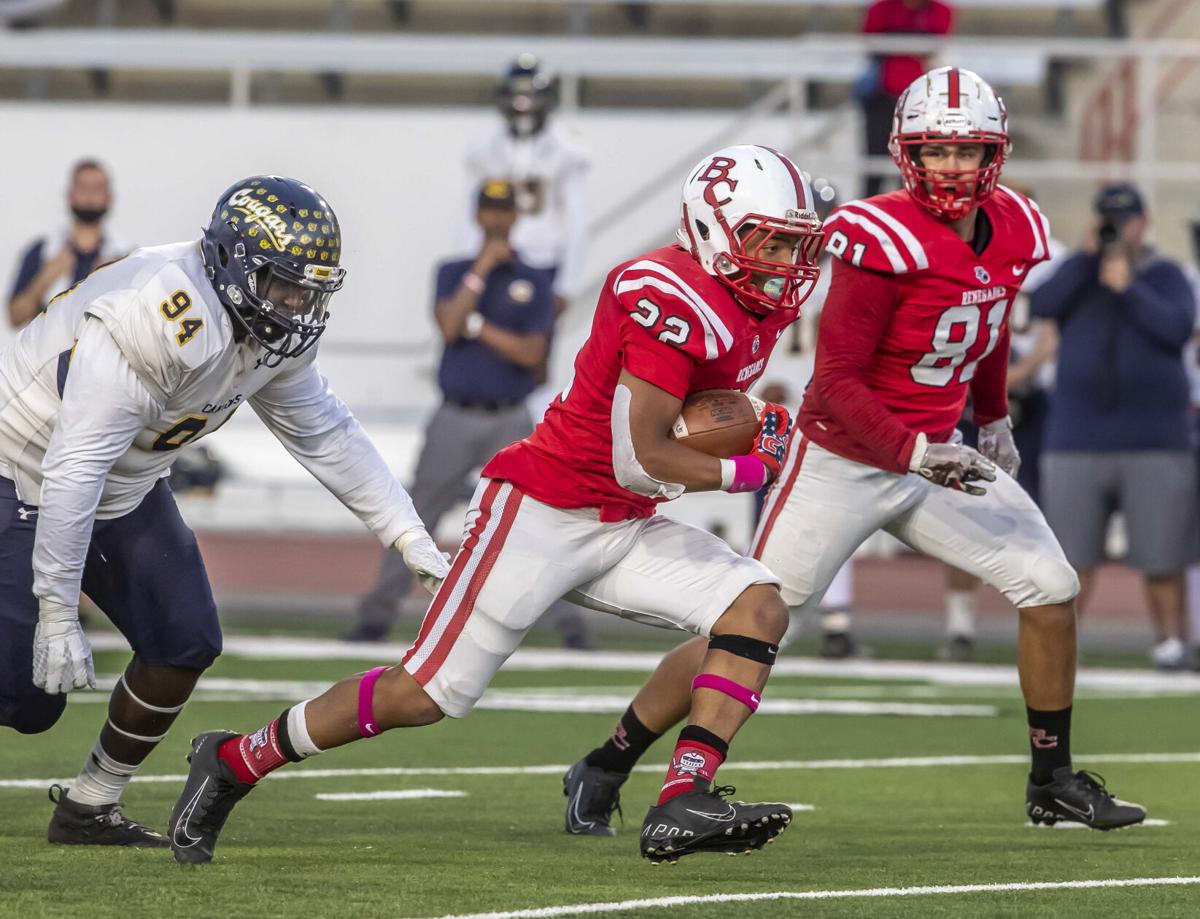 BC running back Antonio Robinson (22) runs for a gain as COS defender Anthony Colins during the first half Saturday night at Memorial Stadium. 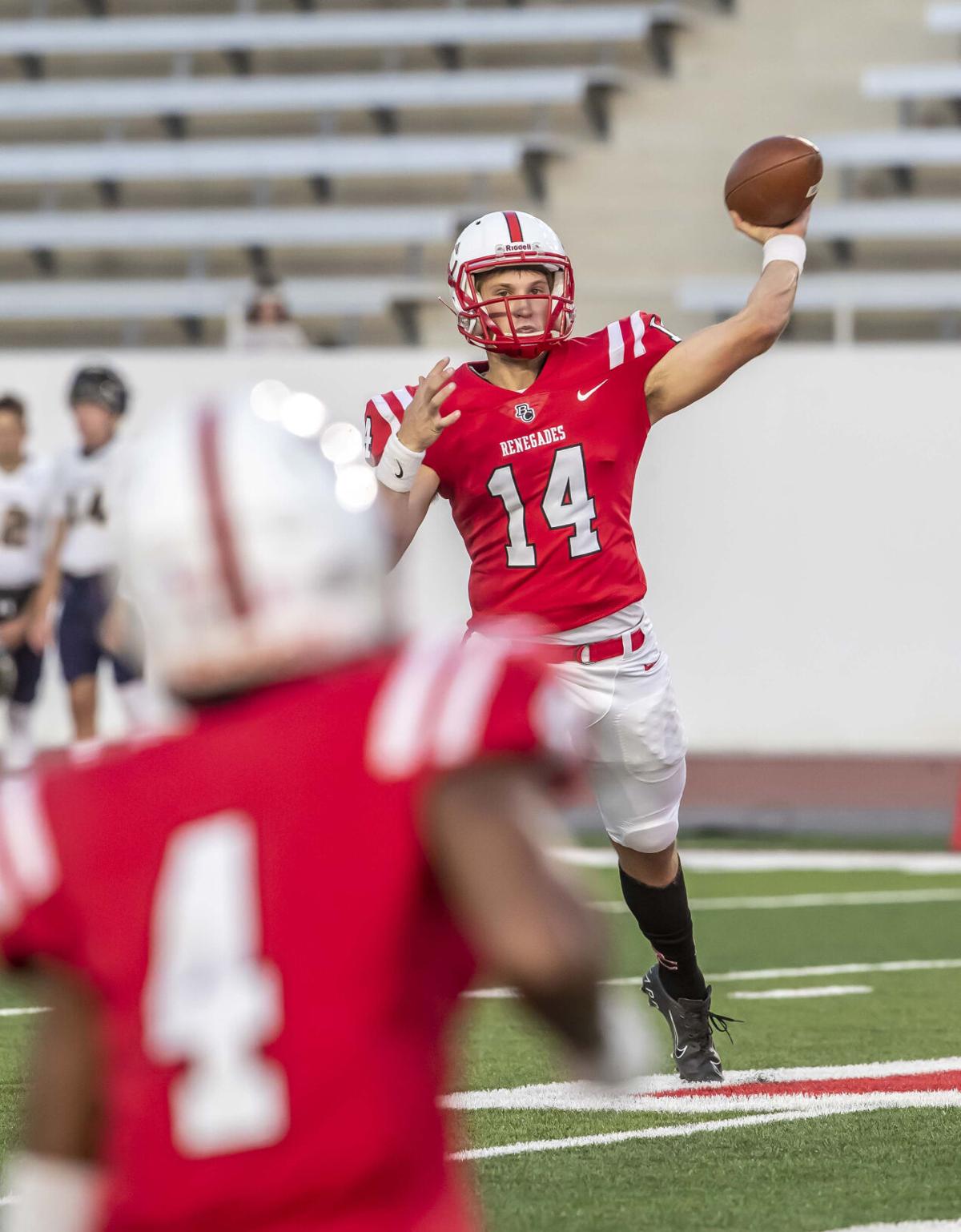 BC quarterback Dexter Frampton throws a pass to Jalen Blizzard during first-half action against COS Saturday night at Memorial Stadium.

Bakersfield College running back Antonio Robinson hurdles to avoid Canyons defender Dajour Dixon during the first half of Saturday's game at Memorial Stadium.

BC running back Antonio Robinson (22) runs for a gain as COS defender Anthony Colins during the first half Saturday night at Memorial Stadium.

BC quarterback Dexter Frampton throws a pass to Jalen Blizzard during first-half action against COS Saturday night at Memorial Stadium.

In a battle of California Community College Athletic Association top-10 teams — College of the Canyons at No. 4, Bakersfield at No. 8 in both polls — one team justified its high ranking and the other fell flat.

The Cougars marched into Memorial Stadium and converted three early interceptions from BC quarterback Dexter Frampton into three touchdowns and outscored the Renegades 21-0 in the second quarter en route to a 35-21 road victory to open Western State Conference play.

COC (6-0) quarterback Colton Doyle completed 17 of 27 passes for 255 yards with two touchdowns and one interception and added 83 rushing yards and another touchdown.

Doyle kept the Renegades (4-2) defense guessing on run-pass options all night and most of the game they guessed wrong. The BC secondary allowed long passes of 42, 54 and 56 yards.

"If your eyes are undisciplined, that's what's gonna happen, literally," BC coach R. Todd Littlejohn said. "Guys start looking and seeing what they're not supposed to see."

Frampton's first pick came on BC's opening drive on a third and 12 when he wanted Jayden Smith over the middle. COC started at BC's 35 and called seven straight running plays, ending with a sneak by Doyle for the opening touchdown.

To the Renegades' credit, they responded immediately. Frampton completed six straight short passes to lead BC down the field on a methodical 14-play, 77-yard touchdown drive that culminated in a 22-yard toss from Frampton to Isaac Jernagin to tie the game at 7. Unlike BC's first loss at Mt. San Antonio in which Frampton was erratic throughout, he finished with 311 yards and three touchdowns to offset his interceptions.

The following six drives after BC tied it up resulted in punts, but then the Cougars opened the floodgates in the second quarter with a first-play deep shot from Doyle to Tiquan Gilmore for 42 yards. Three plays later, the two connected again for a 7-yard touchdown.

The Cougars needed just two more plays to add two more scores in just over four minutes. After a nice catch for Myron Randle between two defenders, Frampton had a pass batted at the line of scrimmage and intercepted by Cole Bullock, who returned it to BC's 8 to set up a touchdown run for Cyrus Zuell.

On the following drive, Frampton stepped up to avoid pressure and deliver a well-placed throw to Jernagin for 22 yards on third down, but two plays later tossed a slow pass to the flat that Ahvie Harris dove in front of. Doyle immediately found Tim Wiggins on the sideline and the receiver galloped past a pair of missed Renegade tackles to boost COC's lead to three touchdowns.

"You cannot do that against anybody, nor against an opponent like this," Littlejohn said. "Absolutely not. So (it's about) consistency, sustaining the drives and not turning the ball over."

BC almost got some points back before the half. Doyle exited for several plays, and his replacement, Tooni Ikahihifo, threw a pair of would-be interceptions that were dropped by Renegades in the span of three plays. Drops plagued the Renegades on both offense and defense throughout the game.

"As I kind of watched, some of those mistakes that we made led to points," Littlejohn said, "because if you drop an interception, something big happens on the next play, and you can't afford to do that."

BC got its interception soon enough. On the second play of the second half, Doyle was picked by Jaydn Harris-Ervin. The Renegades scored when Frampton found Xavier Marshall for a 27-yard touchdown, making it 28-14 and providing some hope of a comeback.

Doyle made another error on COC's next drive, missing an open Gilmore on a deep shot downfield, forcing another punt for the Cougars. BC marched right back down the field and seemed to convert a fourth and 2 in COC territory on a short pass out to the right from Frampton to Randle, but the Renegades were flagged for offensive pass interference and had to punt.

The BC defense came through with fourth-down stops on each of the next two Cougars drives.

First Moises Haynes was stuffed in the backfield on a broken play at BC's 19, but the Renegades went three-and-out to open the fourth quarter.

Then Doyle missed Wiggins at BC's 27. The Renegades had plenty of success with quick hitters on the following drive, but struggled just as intensely as the Cougars in the red zone. Facing first and goal at the 1, Jernagin took a direct snap but was stood up. On the next play a bad snap drove him back to the 9-yard line and on third and fourth down Frampton threw incomplete, turning the ball over on downs with six minutes left.

After BC expended its timeouts, the Cougars iced the game with a 3-yard scoring run by Damon Banks, before the Renegades tacked on a final touchdown of their own with nine seconds remaining, the second of the game from Frampton to Jernagin.

BC travels to Ventura on Saturday to face the unbeaten Pirates.