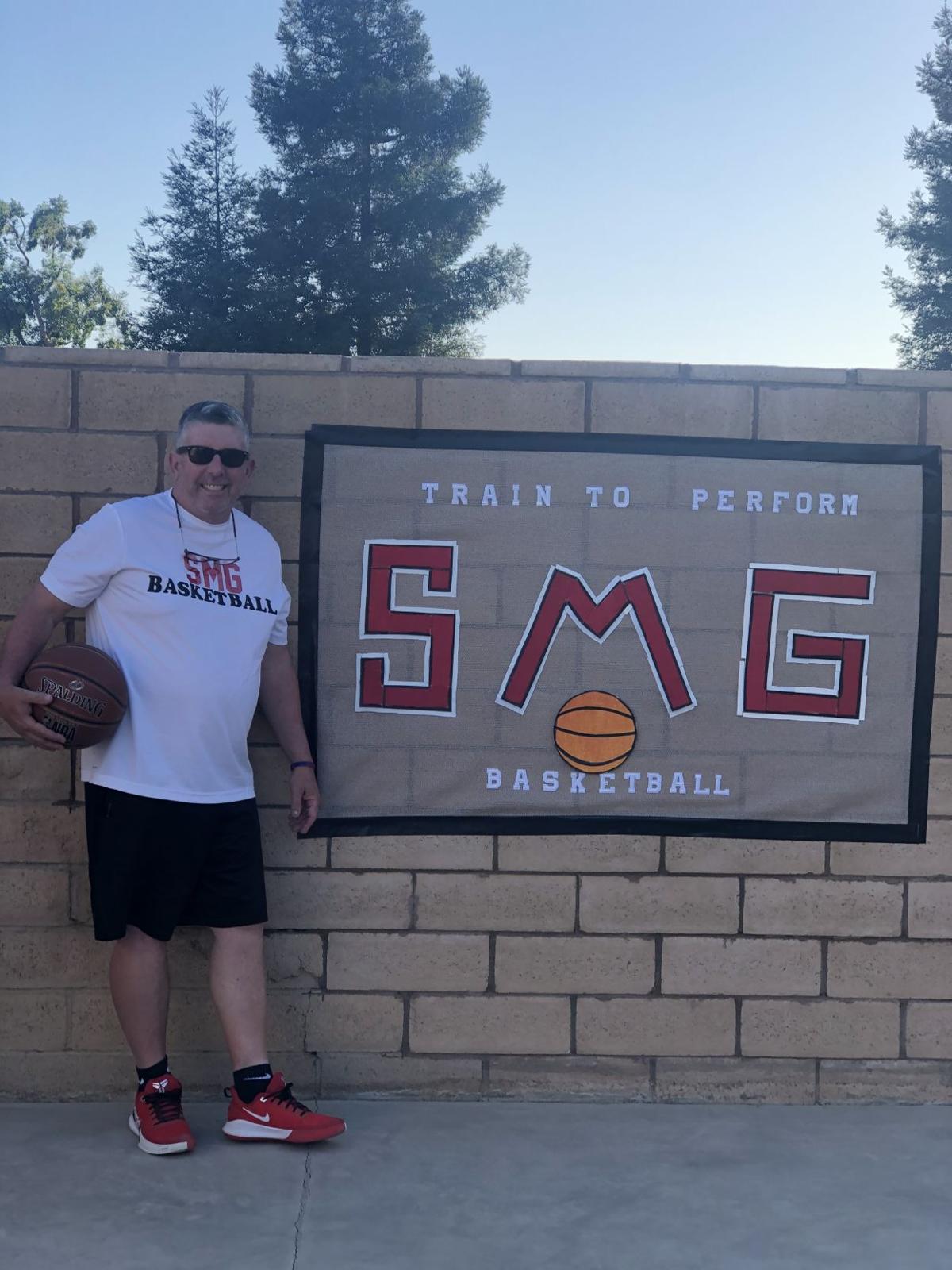 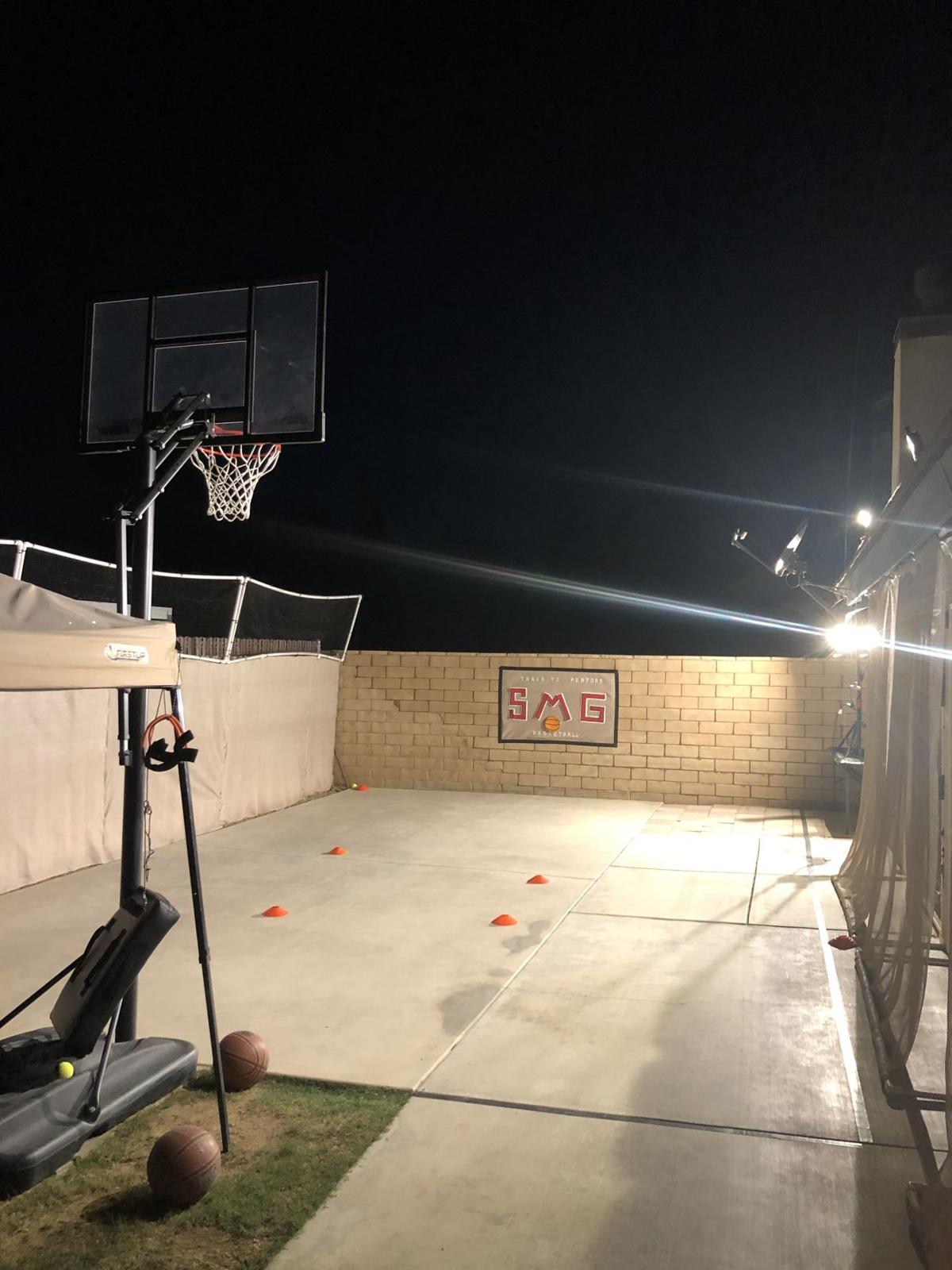 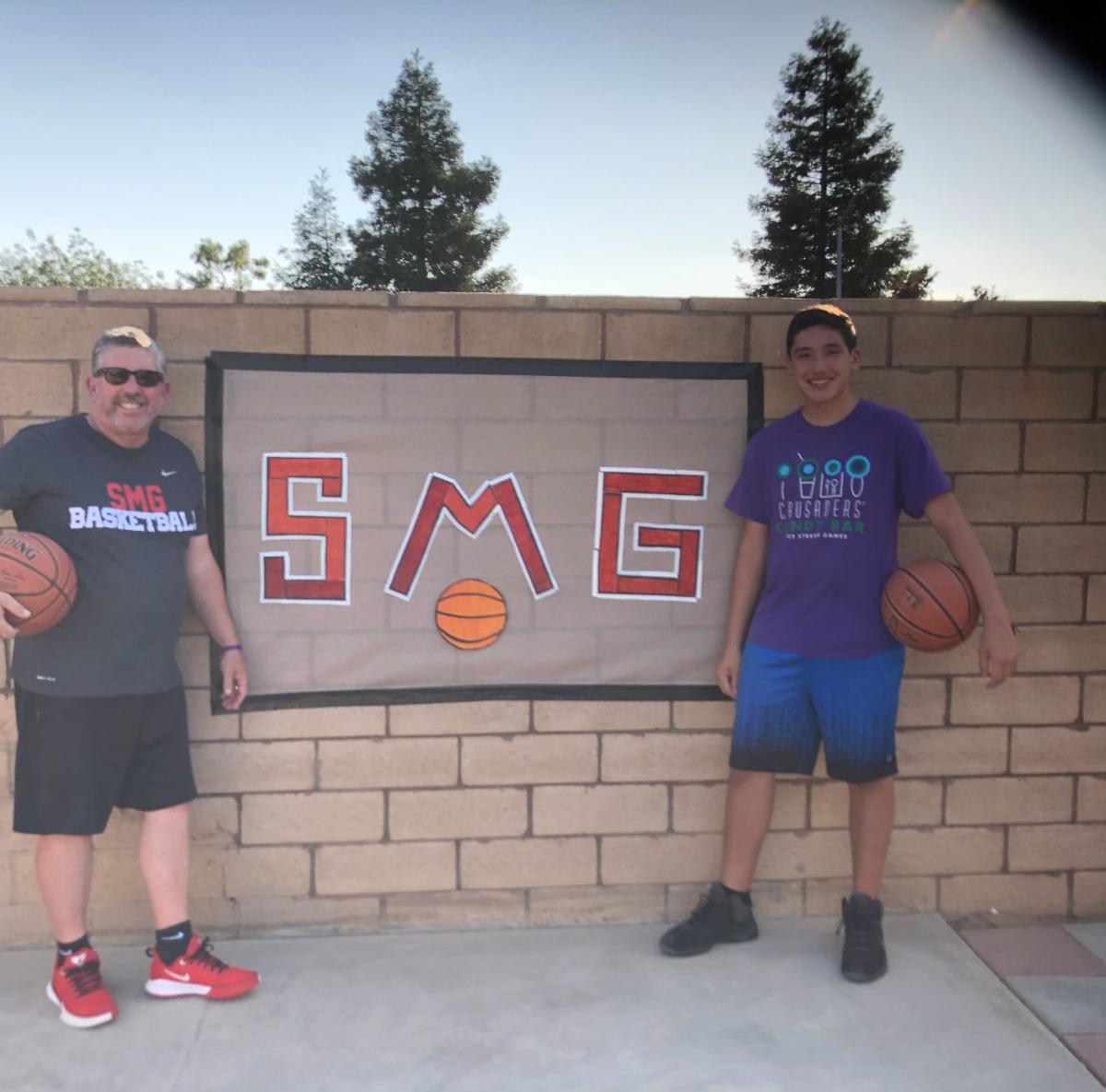 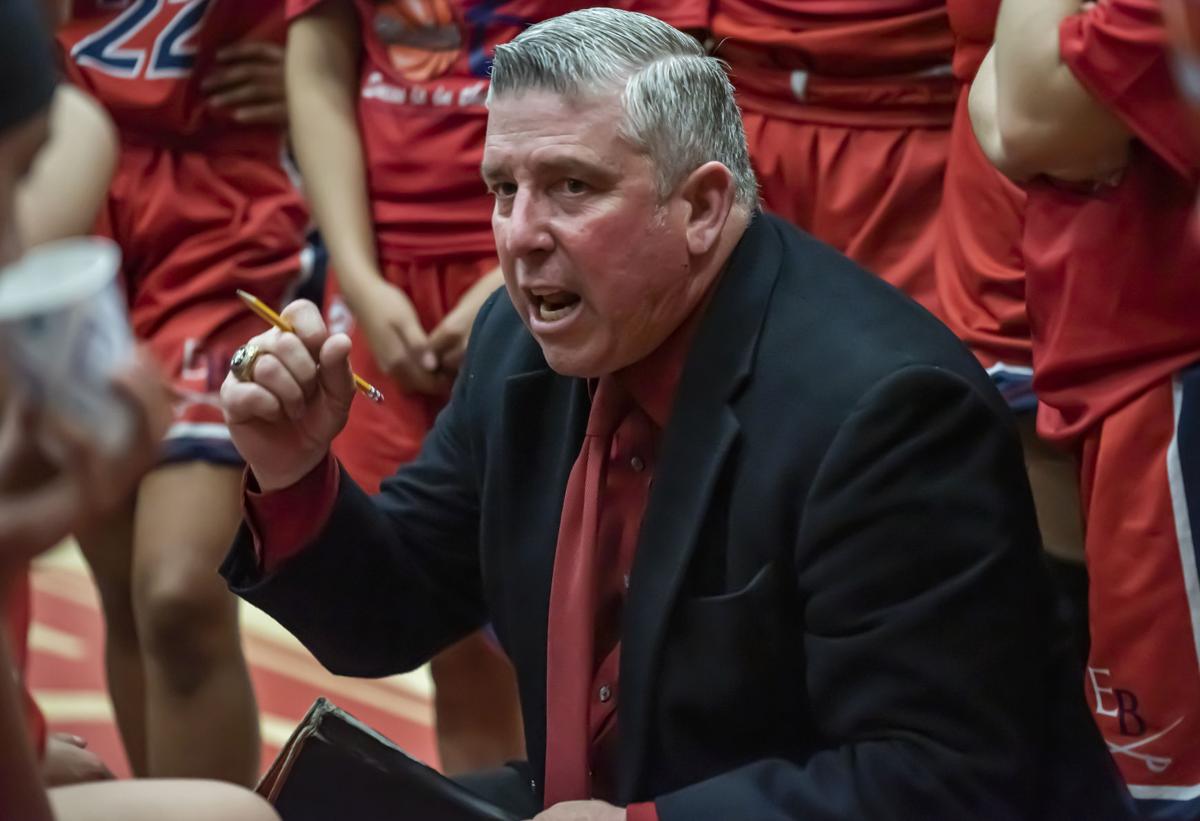 Bobby Sharp has never really considered himself a handyman around the house.

For 36 years, Sharp’s idea of “do it yourself” has centered more around teaching athletes of all ages how to “do it” on the court as a basketball coach.

As part of his passion to teach the sport he loves, the East High girls basketball coach has also been providing paid personal training to basketball players for the past few years, something he hopes to do more of once his high school coaching days are through.

But with the onset of COVID-19, he was having difficulty finding locations to continue that endeavor.

With that in mind, Sharp and his wife, Jeanine, who have been married for nearly 25 years, decided to take things in their own hands and built a court in his backyard.

That required wiping out a large portion of his lawn, pouring enough concrete for a half-court surface and even traveling 90 miles to Lancaster to buy a basketball hoop.

"I had just got my grass green, and it was looking pretty good," joked Sharp, of his new-look backyard that is admittedly a work-in-progress.

But sacrifices had to be made. And just like that, the SMG training facility, which includes tarps for shade and nets to keep the ball in play, began to take shape.

“I’ve been coaching for so long and I started thinking about what I was going to do when I stopped coaching,” said Sharp, of SMG which stands for Sharp Michaela Gabriela, named after his two daughters. “I want to stay involved in the game. So I talked to a few people and they were interested and asked me to train their kids. So I really enjoyed it and things just started to move forward a little and I started to see things coming around the corner a little bit in regards to a need out there.”

Sharp saw the need first-hand as a coach, watching basketball players entering high school with one thing in common — a lack of fundamentals.

“Thinking long term how the game has changed, how players, I believe, really need that individual attention,” Sharp said. “I see a lot of players that come to me at the high school level that are unskilled, they’re not fundamentally sound … And that’s not a knock or criticism of anyone, it just needs to be taught. And because I love that, some people would find jump stops and drop steps boring, I on the other hand think that’s building the house.”

Just like the court he erected in his backyard two months ago.

“You’ve got to pour the concrete and then you can put the wood up and the frame, and then you put all the fluff on the outside,” said Sharp, who led the Blades to the CIF Southern California regional Division V championship this year. The state title game was canceled due when the coronavirus pandemic began to take hold in March.

“Players need a foundation to reach and exceed their potential," Sharp said. "And if they don’t understand that fundamental base, then no matter how athletic or how good they are … I’ve been blessed to work with some really good talent over the years, but I learned from my mentors, the importance of how to really get players trained and skilled. Not only the physical piece, but the mental piece. How you build confidence, how players see themselves and why some kids succeed and why others don’t.”

Although things have been challenging during the pandemic, Sharp is currently working with three high school kids. The weekly training includes strength and agility training at a nearby park and instruction on the fundamentals in the longtime coach’s new backyard facility located in Northwest Bakersfield.

“I know there’s a lot of club and AAU stuff going on, that’s been happening for many years, but I still feel like that one-on-one training, teaching fundamentals, teaching footwork, how to shoot properly and the things they’re going to need mentally to help them be as good as they can be (is important),” said Sharp, who was an assistant on Foothill’s 1988 boys state championship team. He also led Ridgeview to a Central Section boys title in 2010.

“One of the things I always tell parents when I start is that I’m going to work hard to (teach their kids what they need to do),” said Sharp, whose training services are geared toward players between the ages of 8 and 21. “The rest is up to them. I can’t promise they’re going to be a superstar or going to be in the NBA or WNBA or that they’ll get a scholarship. But I can promise (if they work hard), they’re going to reach and exceed their potential.”

That was music to the ears to parents such as Maribel Ruiz, who signed her son Julian up at SMG in February.

“When I was doing research on basketball coaches, he was one of the ones that had the best reviews,” Ruiz said. “When I contacted him, he wanted to know exactly what I was looking for and to see if they were going to be a good fit. He wanted to see if he was going to be able to help my son and what his weaknesses were. So he was very understanding, very informative and I really, really like that.”

“(Coming into high school) I felt like he needed a little bit more of the competitiveness and more training because there were a lot of things (he hadn’t learned). I wanted to give him the tools to be able to succeed this coming year. His confidence level has really increased.”

That was something she said she noticed almost instantly.

“My son also mentioned with the very first training. (Coach Sharp’s) main thing is fundamentals and that you need your fundamentals in order to be good in the game. I remember (Julian) saying, ‘mom, he’s telling me things that I’ve never even heard of before.’ Some of the things he was teaching, even to (shoot) the ball, he was like, ‘they never took the time to teach us that.’ So we were very impressed from the beginning. He’s very understanding, but he’s also very determined to teach what my son needs to learn. He gives him constructive criticism and tells him he needs to work on this or work on that.”

Former Garces High standout Isaiah Hughes, who is now a redshirt freshman at Humboldt State, also believes benefited from his time with Sharp.

“I worked with him a lot,” said Hughes of the summer before his senior year. “He helped me with my game and some of the nuances … getting me mobile. Just working one-on-one with someone is always good. He helped me just get ready. My confidence (really improved). He was always telling me to believe in myself and trust in myself. And that happened.”

It’s all just another day at the office for Sharp, who is simply doing what he loves to do.

“Having coached as long as I have, through the years I’ve always enjoyed the fundamental pieces of basketball,” Sharp said “I think what I enjoy the most is the everyday practice and coaching players.

“SMG basketball is just a microcosm of who I am as a coach. My love of the game is teaching the game, breaking the game down so players can understand it and it’s giving them an opportunity to hopefully grab some of the passion and love that I have for the game. And ultimately I want to help them succeed.”

East High girls basketball coach Bobby Sharp is providing paid basketball training to boys and girls between the ages of 8 and 21.