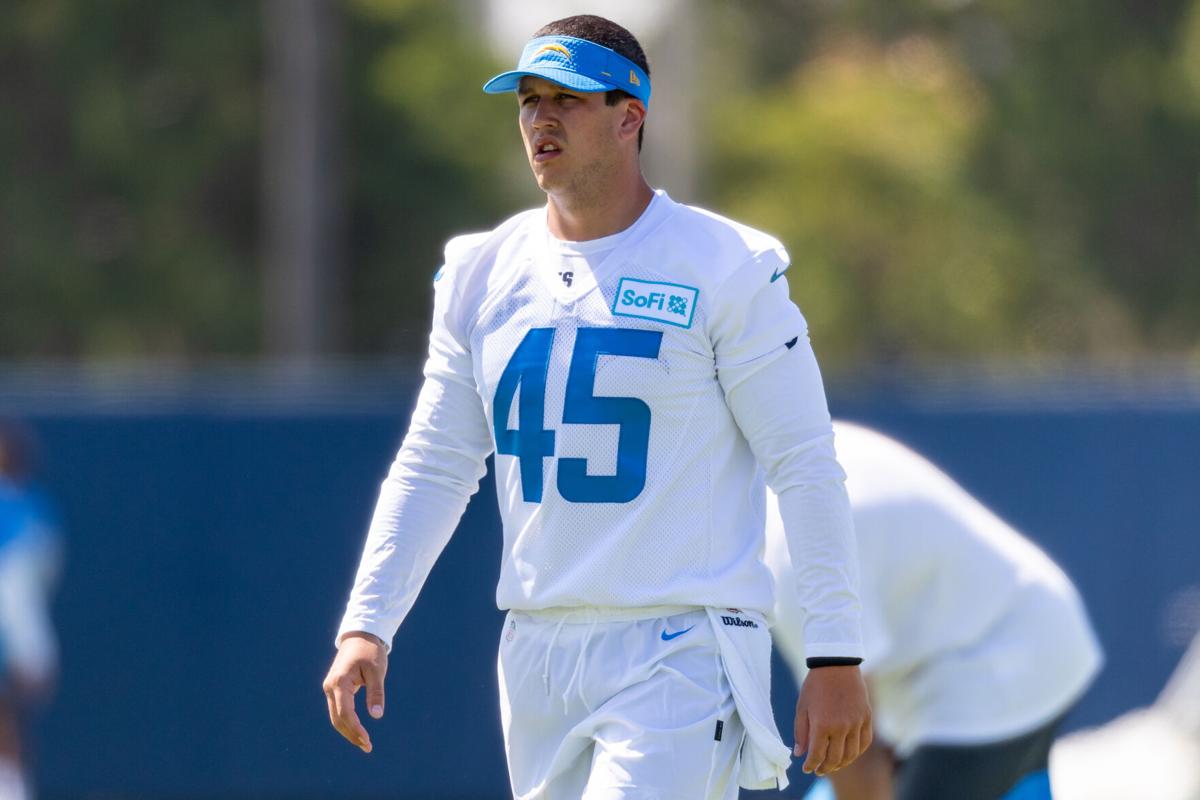 Bakersfield native Cole Mazza takes part in training camp for the Los Angeles Chargers. After two years away from football, Mazza, a Liberty grad has found a home as a long snapper for the Chargers.

Bakersfield native Cole Mazza takes part in training camp for the Los Angeles Chargers. After two years away from football, Mazza, a Liberty grad has found a home as a long snapper for the Chargers.

With the start of the regular season less than a week away, NFL rosters are beginning to take shape for 2020.

On Saturday, teams were required to finalize their initial 53-man rosters, and several local players discovered if they would have week-one roster spots.

Eight players with Bakersfield ties entered team camps when they opened in July, and while many of them were assured they would have a home for the start of the 2020 season, others are left searching for a new place to play.

Below is a recap of where those eight players stand after Saturday's final cut deadline.

Made the 53-man roster

Derek Carr (Bakersfield Christian), QB, Las Vegas: Carr has been the week-one starter for all six of his previous seasons with the Raiders and year seven will be no different.

The 2020 season will mark the first time the Fresno State product will represent a team from outside California, as he and the Raiders begin their first season in Las Vegas. Carr will attempt to record a third-consecutive 4,000-yard passing season and lead the Raiders to the playoffs for just the second time since 2002.

Cole Mazza (Liberty), LS, Los Angeles Chargers: After beating out veteran Mike Windt for the long snapper job last season, Mazza was all but assured a roster spot when the Chargers didn't bring in any competition for him this year.

On Saturday, that spot was officially secured for Mazza, who won a national championship at Alabama in 2015.

Jordan Love (Liberty), QB, Green Bay: Despite reports of an up-and-down training camp, Love's roster spot was never in doubt, and the first-round rookie is expected to take what amounts to a redshirt season in 2020.

Currently, Love is listed as the third quarterback on the Packers' depth chart, coming in behind future Hall of Famer Aaron Rodgers and Tim Boyle, the team's backup in 2019.

Jared Norris (Centennial), LB, Washington: Having previously played three seasons primarily as a special teamer in Carolina, Norris was hoping for a fresh start after being out of the league in 2019.

Sadly, it doesn't appear that fresh start will be coming in Washington as Norris, who was listed on the team's injury report on multiple days during camp, was waived on Saturday.

Krys Barnes (Liberty), LB, Green Bay: Barnes showed great versatility in Packer camp, where he was reported to have gotten reps at four different positions. Unfortunately, it wasn't enough to land him a spot on the 53-man roster.

With the cancelation of all preseason games, Barnes, an undrafted rookie out of UCLA, had no opportunity to showcase his talents in live game action. If he doesn't land on another roster, he's a strong candidate to land on Green Bay's practice squad.

Solomon Ajayi (Bakersfield College), LB, Cleveland: Like Barnes, Ajayi, a former standout at Bakersfield College, had an uphill climb trying to make a roster as an undrafted rookie free agent in a year where preseason games weren't being played.

Ajayi also appears to be a strong practice squad candidate if he's not picked up by another team. Teams will announce their practice squad signings on Sunday.

D.J. Reed (Independence), DB, Seattle: The Seahawks swooped in and claimed the defensive back after division rival San Francisco placed him on waivers in August.

Reed is out indefinitely with a pectoral tear. Currently on the non-football injury list, he's expected to be moved to injured reserve Monday

Former Centennial quarterback Cody Kessler also had a shot to make a roster after working out for Houston in late August, but was not offered a contract by the team.