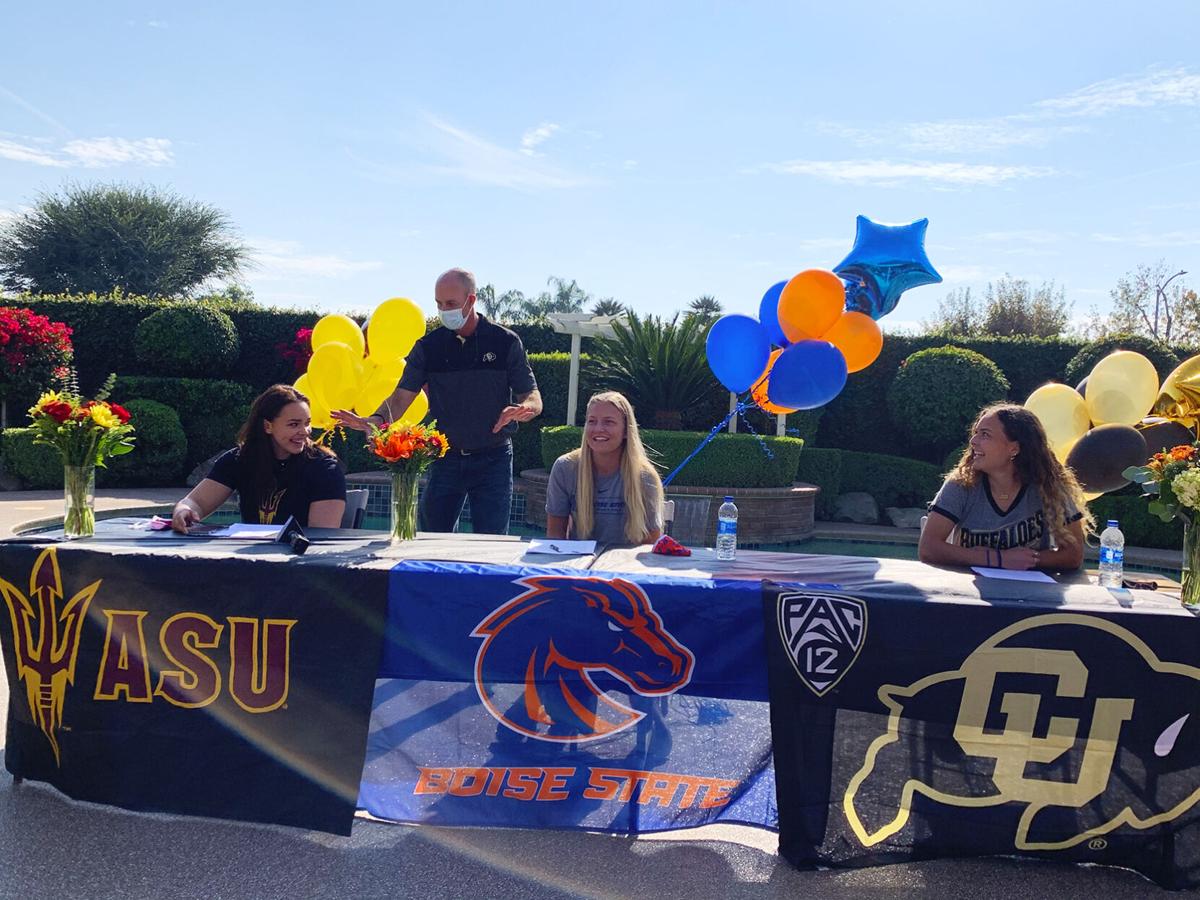 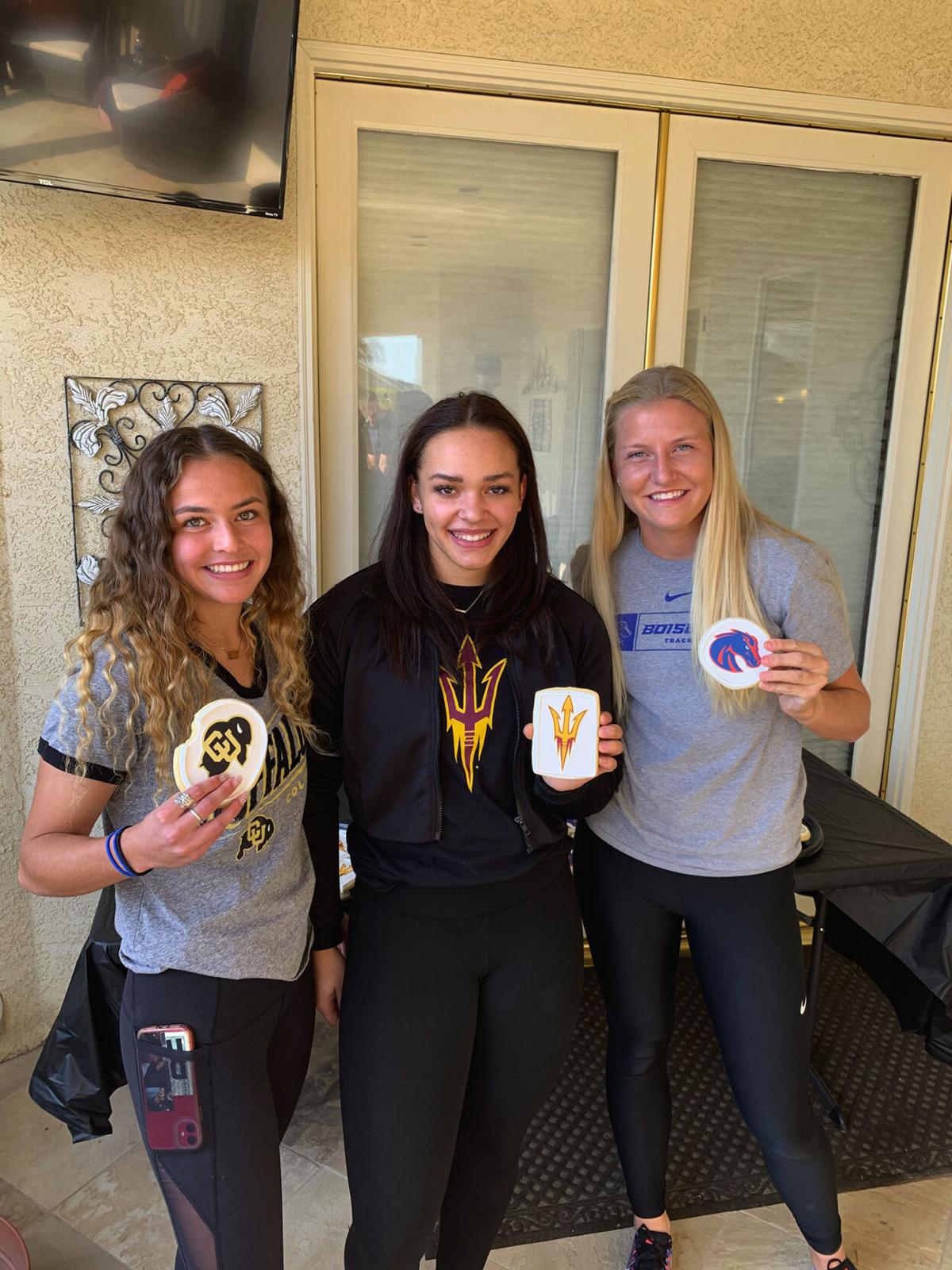 With accomplishments that could fill a book — more aptly a record book — it’s a good thing Ryan Renz kept it relatively short when describing the three honorees for Wednesday afternoon’s signing day ceremony.

The Liberty track and field coach was well-spoken and hit the mark when describing seniors Faith Bender, Rebecca Vanderpoel and his daughter, Reese Renz. But considering the girls have a combined 13 school records, he could have easily hijacked the celebration with an overflow of well-deserved praise.

As it turned out, the safety-conscious gathering in front of a select few family members, coaches and media was perfectly executed — and all in time for a catered lunch in the Renz's well-manicured backyard.

“It’s kind of an unprecedented situation to have three girls sign to Division I colleges,” Ryan Renz said. “It’s kind of an amazing situation for Liberty. We’re just so blessed to have these girls. They’ve made an impact from day one. We knew coming in after eighth grade they were going to be great. And they have not disappointed at all."

“We have another year left with two of them,” Ryan Renz said. “We’re just so excited with what they’ve accomplished thus far and what they’re going to accomplish in the future.”

The missing piece — Reese Renz — will begin in a few short months. The senior, who finished third in the 300 hurdles and sixth in the 100 hurdles at the CIF State Championships as a sophomore, plans to graduate early and enroll at Colorado for the Spring semester.

“It’s definitely surreal,” Reese Renz said. “I’ve been waiting for this for so long. It’s like being here with them and realizing you’re not going to run with them again and not going to see them on the track. It’s just sad because we’ve been on this journey, even since junior high we’ve seen each other and talked to each other at meets. So it’s kind of sad.”

It was also emotional for her father, although he did a good job of holding things together.

“I tried to keep the emotions out of it,” Ryan Renz said. “Obviously, you’re talking in front of a bunch of people. I’m just so excited for her future. It was a difficult decision for her.”

Although it will be a bit of an adjustment for the Patriots’ coach, the consolation prize isn’t too bad either. He will still have an opportunity to coach Bender, one of the country’s top high school throwers.

Bender finished second in the discus and fifth in the shot put at the state meet as a sophomore and said she is fully healthy after suffering a back injury last year. Now she’s firmly focused on preparing for this season, and beyond.

“I’m very overwhelmed, just really ecstatic, really excited,” said Bender, who will attend Arizona State next year. “My family and all my supporters are here. I’m really excited to get to college and train, and perform at the next level. I’m just very blessed. Things are definitely starting to become more real. Our dreams are happening so I’m definitely excited.”

For Vanderpoel, her decision to sign with Boise State was a dream come true. In fact, she wore the same Boise State T-shirt she wore as a freshman to Wednesday’s event. She has family who own a nearby farm and she said she fell in love with the campus on her visit.

“When I first started track in high school, I never thought I would be given the opportunity of running at a D-I school,” said Vanderpoel, who qualified for the state meet in the 200 and 400 as a sophomore. “So Boise has been like a dream for me since my freshman year. At the time I did not think it was possible, but now I proved myself wrong. I am so happy.”

While the moment was obviously bittersweet for Ryan Renz, he understands that this group is special.

“We’ve been very blessed the last 10, 12 years at Liberty,” Ryan Renz said. “There’s been a lot of talent come through here, girls and boys. We’ve had kids go all over. But to have all three of them at once … and have such an impact … When I look at how many records Becca has, and Reese has and Faith has all the records in throws. And seeing them here at the same time, people are going to look back hopefully in 20 or 30 years, and some of those records are still going to be there. They just have a wealth of talent. It’s just amazing and I’m blessed to be the coach here.”