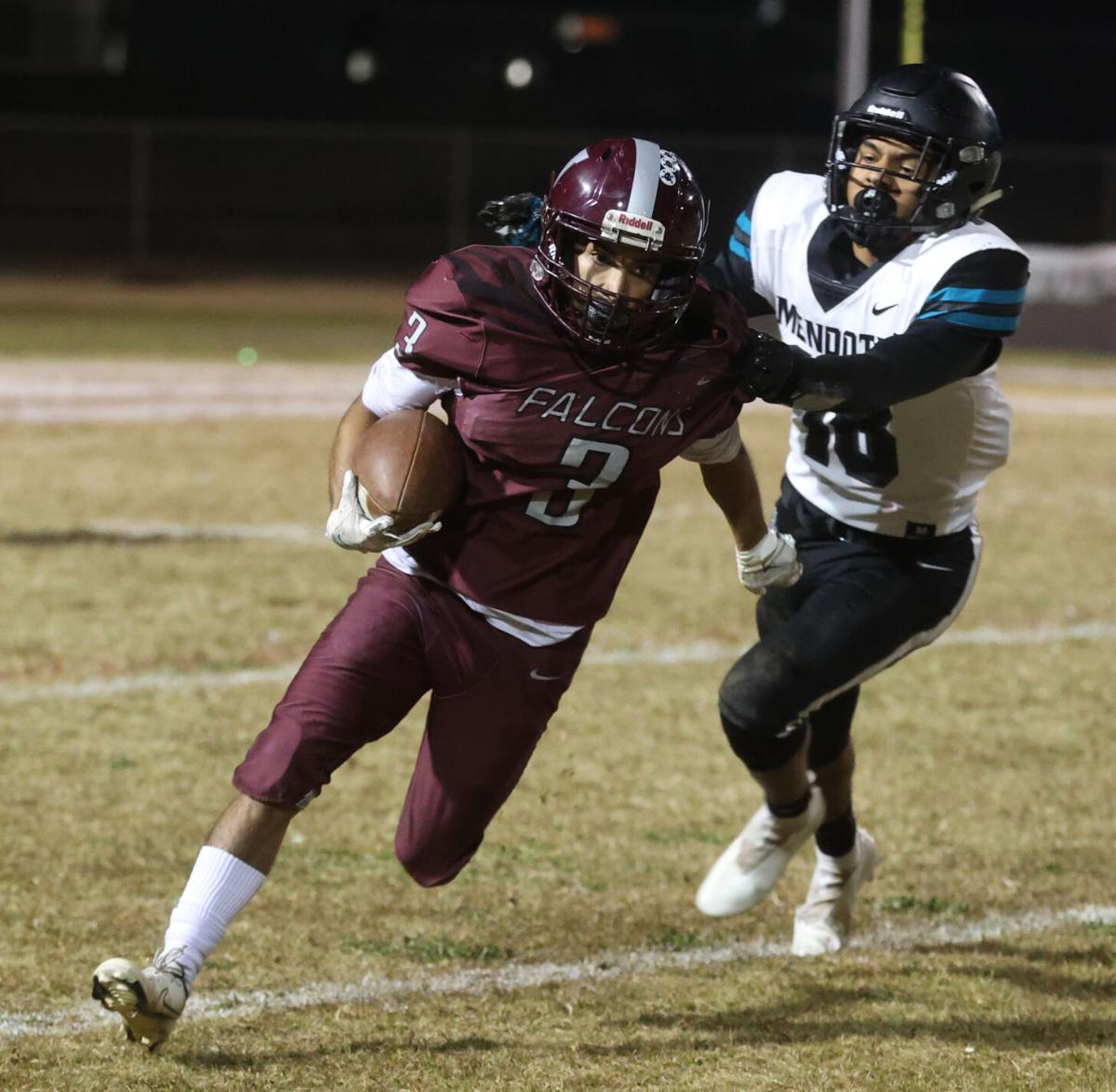 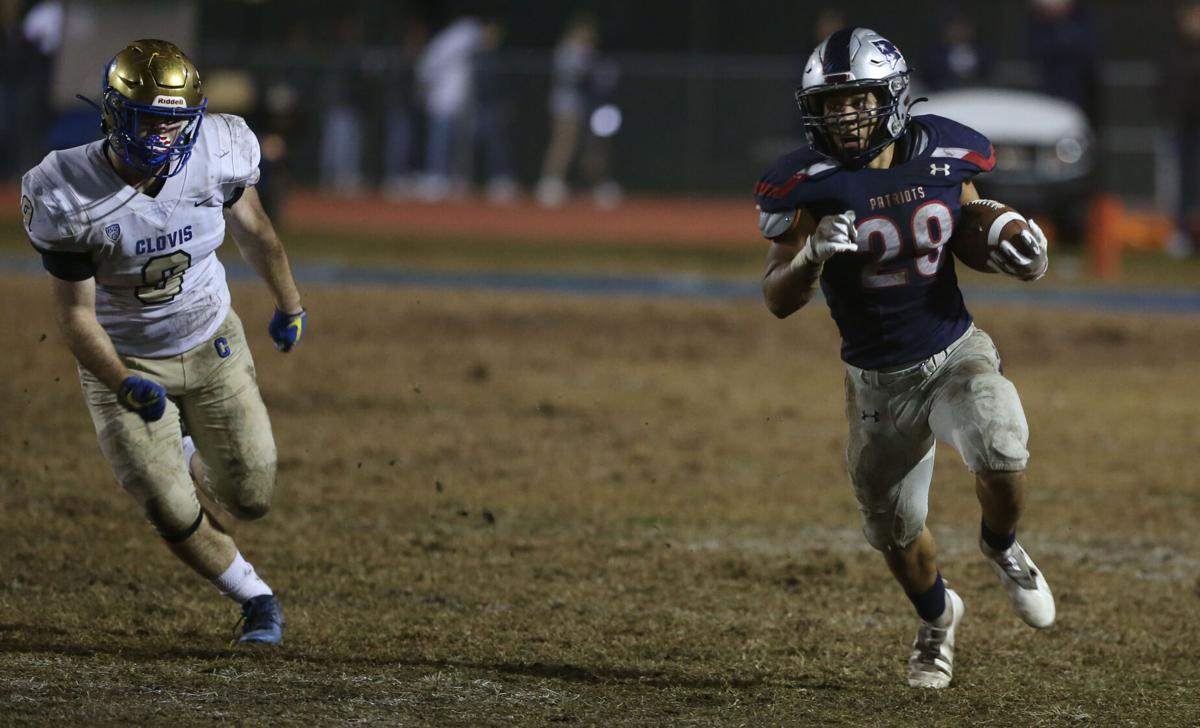 Liberty High running back Jalen Hankins breaks into the secondary as Clovis' Ryan Christensen gives chase during a Central Section Division I quarterfinal game at Liberty earlier this month. 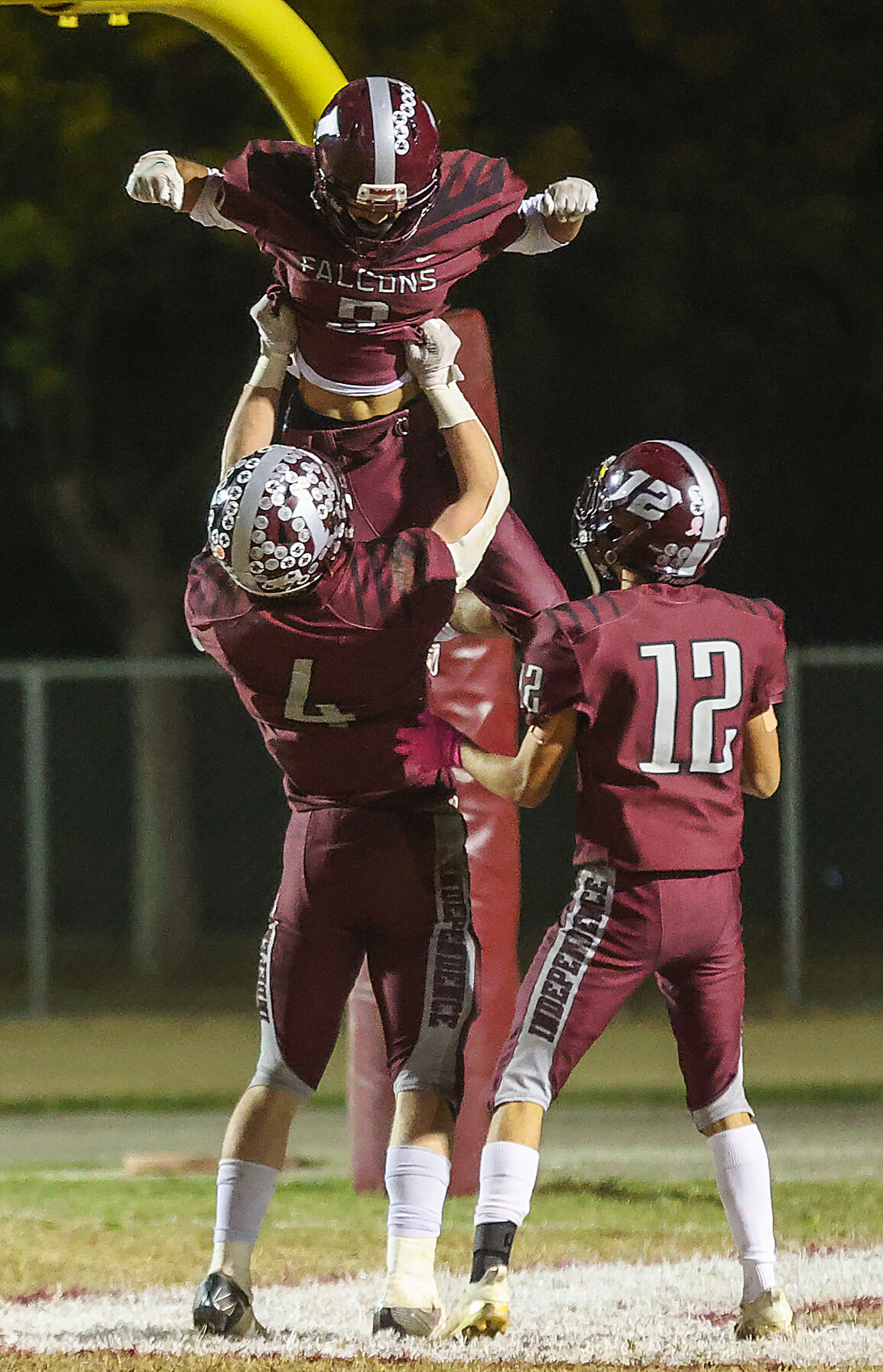 Independence's Evan Peaker picks up Jonathan Vigil after his touchdown against Mendota on Friday night.

Liberty High running back Jalen Hankins breaks into the secondary as Clovis' Ryan Christensen gives chase during a Central Section Division I quarterfinal game at Liberty earlier this month.

Independence's Evan Peaker picks up Jonathan Vigil after his touchdown against Mendota on Friday night.

National-power La Puente-Bishop Amat ended Bakersfield High’s 24-game regular season winning streak 34-3 that day in a game that featured future NFL standout Daylon McCutcheon on one side and legendary Driller running back Steve Wofford on the other.

But although the temporary seating that exceeded the listed capacity of 19,748 may not be needed — or even allowed — the stands figure to receive plenty of use when high school football returns to the venue Saturday as Liberty hosts Pittsburg in a Northern California Regional Bowl Game at 6 p.m.

It will be the first high school game since 2016 when BHS defeated Liberty in the Central Section D-I semifinals, one of three games the Drillers played there that season while Griffith Field received a much-needed upgrade.

The Patriots (10-2), fresh off a 42-14 rout of three-time defending champion Fresno-Central in Friday’s Central Section Division I title game, will be “hosting” its second CIF State playoff game in the past six years.

“It’s a great venue,” said Nixon, a former quarterback who played at BC. “There’s not a lot of stadiums like that and we’re excited to be playing there. But we know we have to focus on what’s in front of us, and that’s a football game. So I’m happy to be part of this, happy to be playing up there and excited for our kids.”

Liberty lost on its home campus to Loomis-Del Oro, 28-24, in a Northern California Regional Division 2-AA Bowl Game in 2015.

Spirits are high as the Patriots are already knee-deep in preparation for the Pirates (9-2), who won their first North Coast Section Division I title in 30 years. The 28-14 victory came against an opponent, Concord-Clayton Valley, that the Patriots are familiar with.

“You’ve gotta think so,” said Nixon of his kids’ high confidence and excitement level. “We’ll meet tomorrow morning and get going on our routine for the week. I know they’re excited. They were talking a little bit about practicing on Monday. So the excitement’s there and we have to keep the focus and put one together this week.”

The Patriots lost the following week at Santa Barbara-Bishop Diego, 28-21, accepting the game with only a few days' notice when Chaminade was forced to cancel their scheduled game due to COVID-19 health and safety protocols.

Liberty hasn’t lost since, winning its fourth straight Southwest Yosemite League title, before disposing of Stockdale and two top-25 state-ranked opponents in successive weeks, including a 28-21 win over top-seeded Clovis Buchanan in the section semifinals.

Now the Patriots must face a Pittsburg squad that was ranked 25th in the state by CalHiSports, one spot behind Central, last week. Liberty was ranked 39th prior to its victory over the Grizzlies and figures to make a jump in the poll this week.

The winner of this week's game will play the 4 p.m. Dec. 11 at Saddleback College, against either Long Beach Poly or Gardena-Serra, who play in the SoCal regional.

Independence will have an opportunity to continue the momentum it generated after winning the school’s first Central Section football championship on Friday in a 28-21 victory over Mendota in the Division IV final.

The Falcons (8-6), who started the season 0-6 and have won eight straight, will travel to face Venice in a Southern California Regional Bowl Game on Friday at 7:30 p.m.

“We’re excited about being able to continue our season and have an opportunity to maybe play for a state championship, if we take care of this week,” fourth-year Independence coach Tyler Schilhabel said. “I really haven’t had much of a chance to talk to the boys other than through texting or the Remind app that we use. I’m excited to see them (Monday) morning to get this game prep ready.”

The winner will travel to play for a CIF state title the following Saturday at either Novato-San Marin or Sutter, who play in Friday’s NorCal Regional Bowl Game.

The Gondoliers (8-3), who finished second in the Western League, defeated Canoga Park in the Los Angeles City Section Division I final on Friday, 36-9, and have made a similar late-season run as Independence. Venice opened the season 1-3 and has won seven straight since.

“I think we’re going to come out hungry and ready to play,” Schilhabel said. “Obviously Friday night was a huge accomplishment for us for a lot of different reasons, but I kind of talked to them beforehand and that wouldn’t be the pinnacle of our season. If we won, it would be a huge deal for us, but we’d also get to go for pretty much the Holy Grail of all of football, which is winning a state championship. So I know they’re going to be excited to play.”