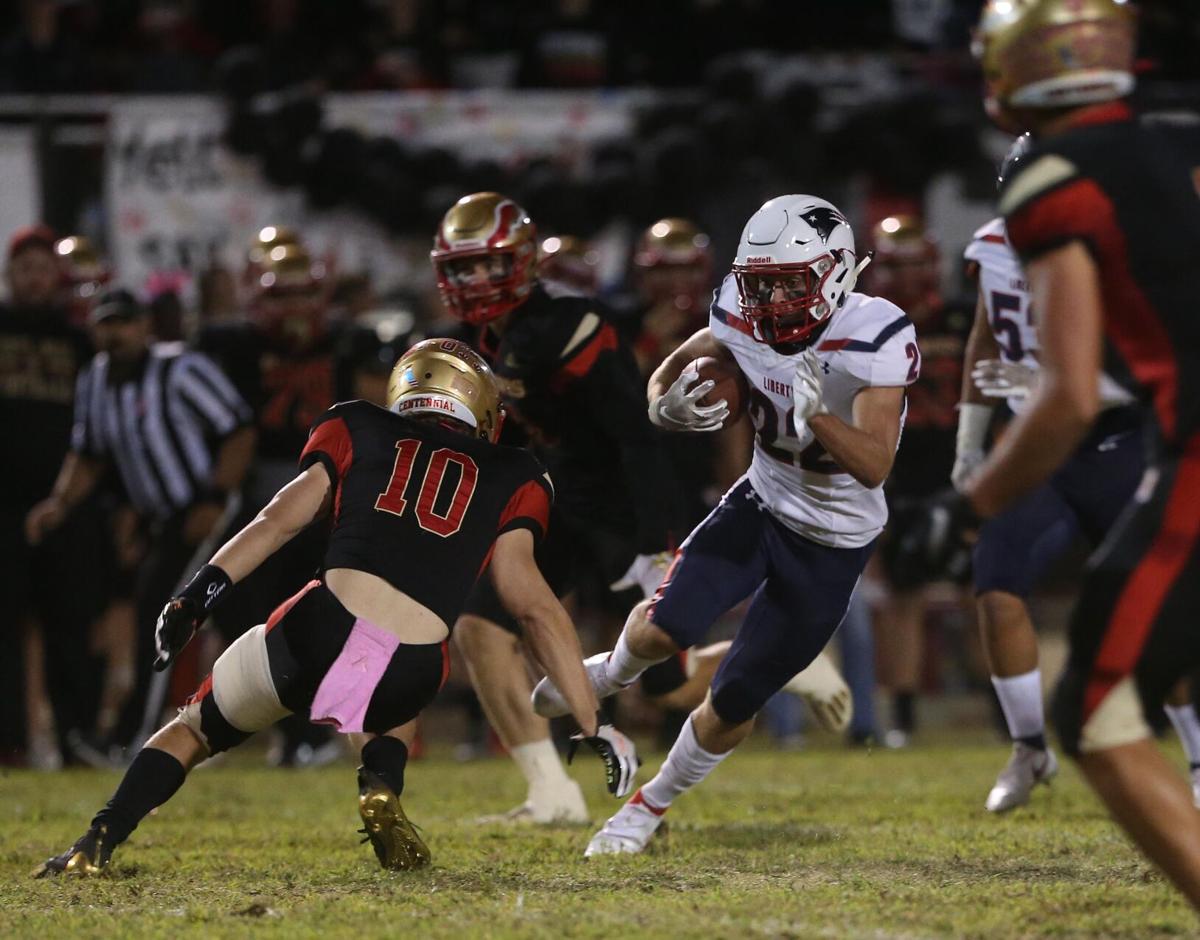 Liberty running back Grant Austin breaks into the secondary in first action against Centennial. 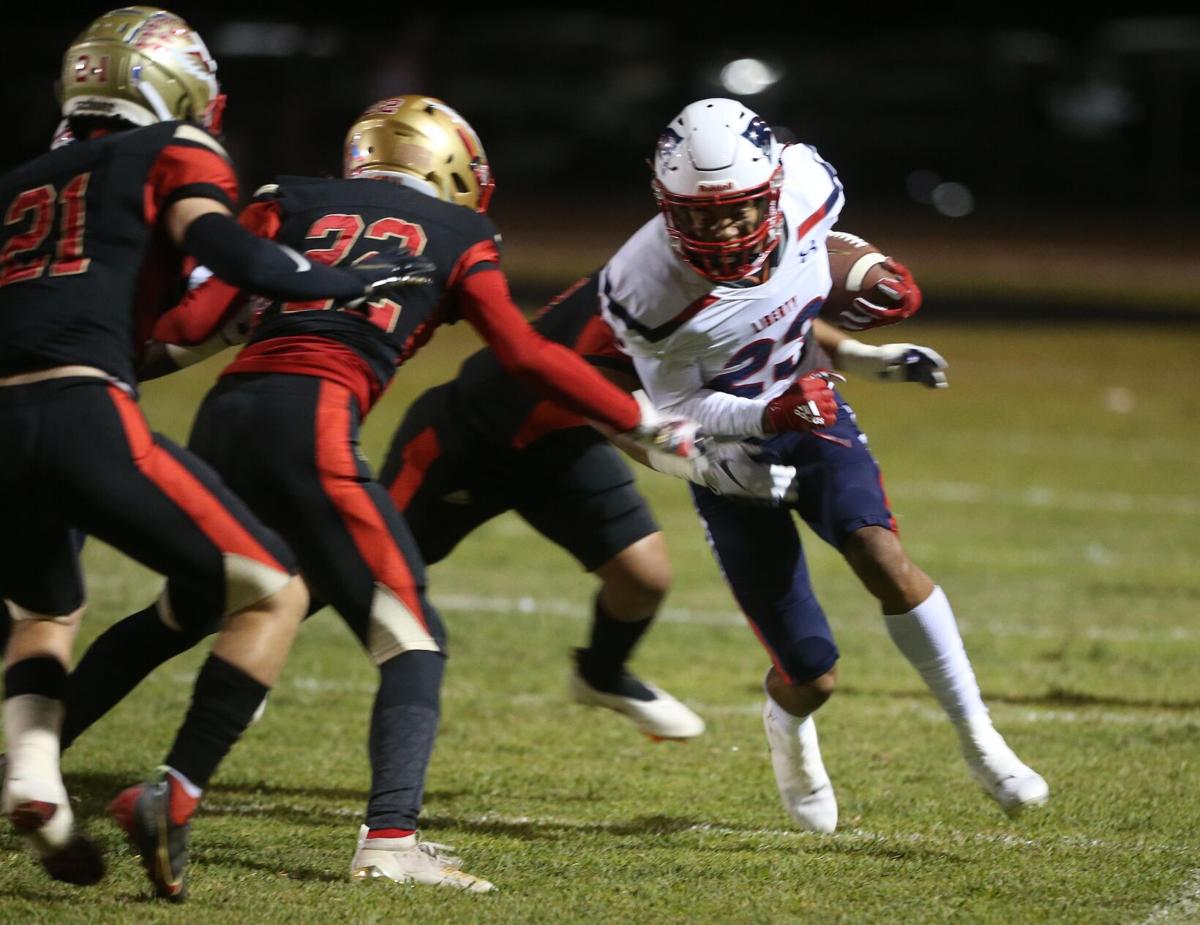 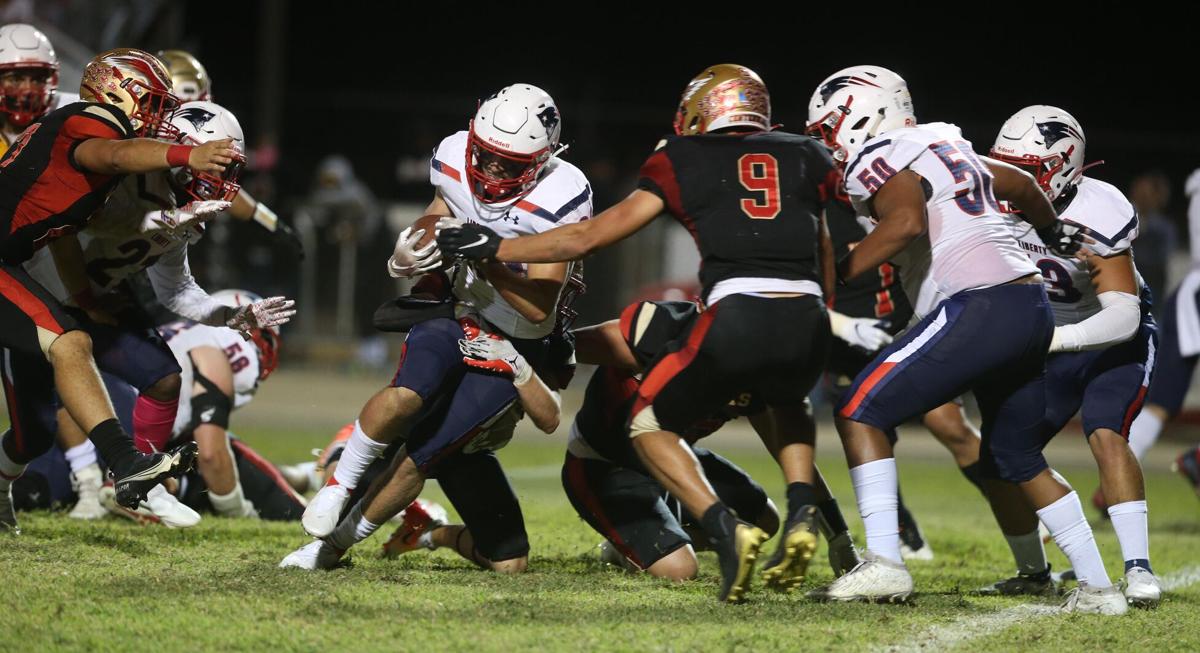 Liberty RB Grant Austin eventually runs his way to the endzone in first action against Centennial. 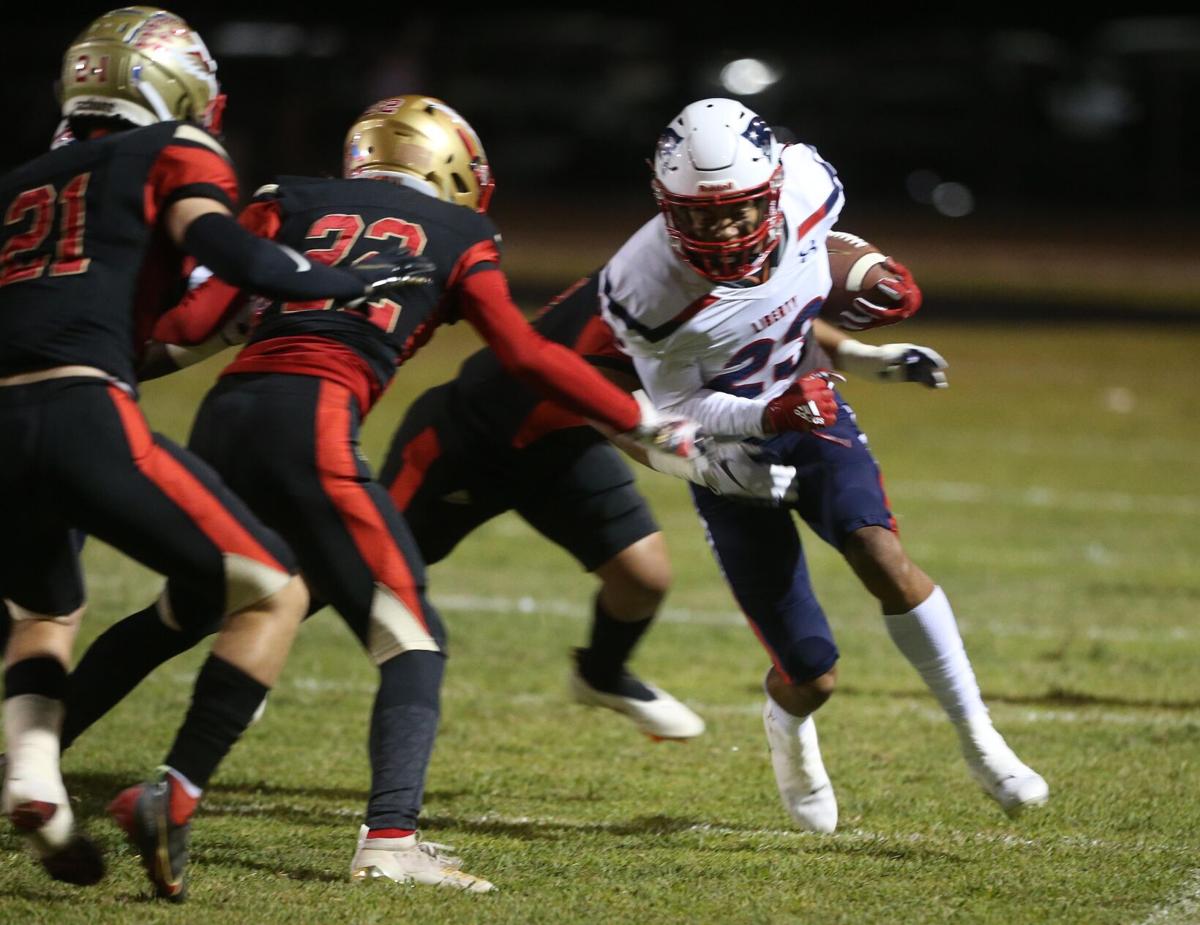 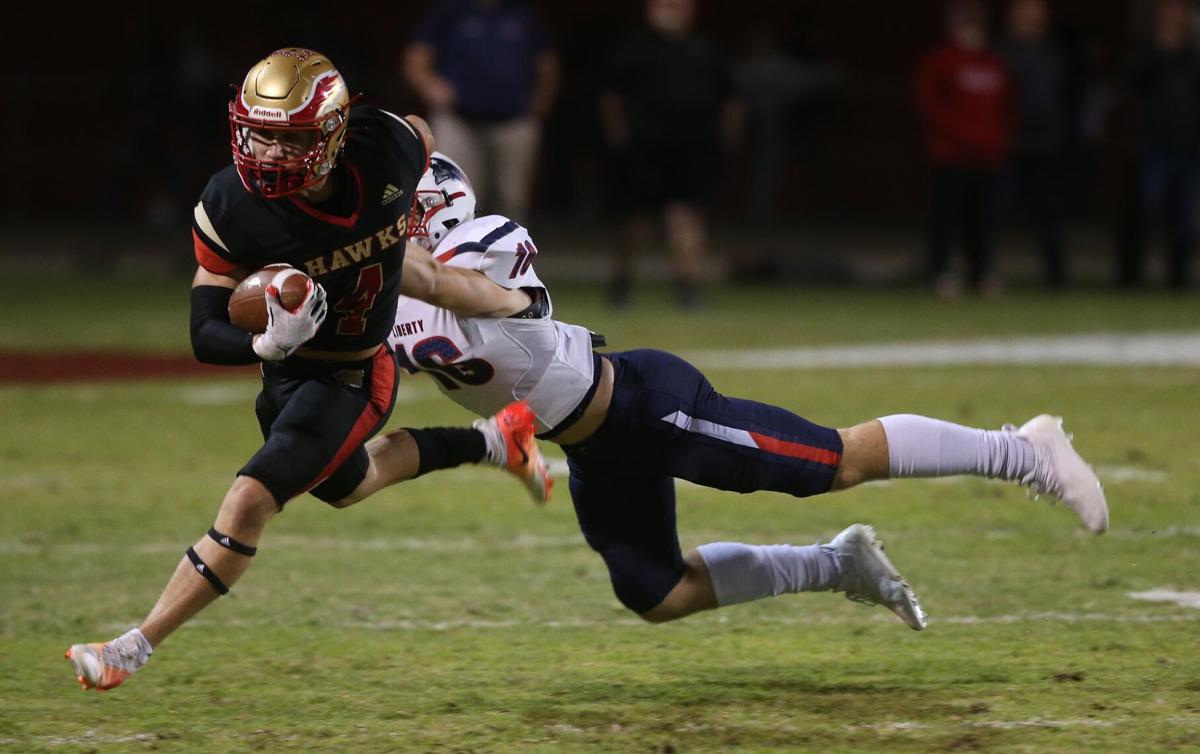 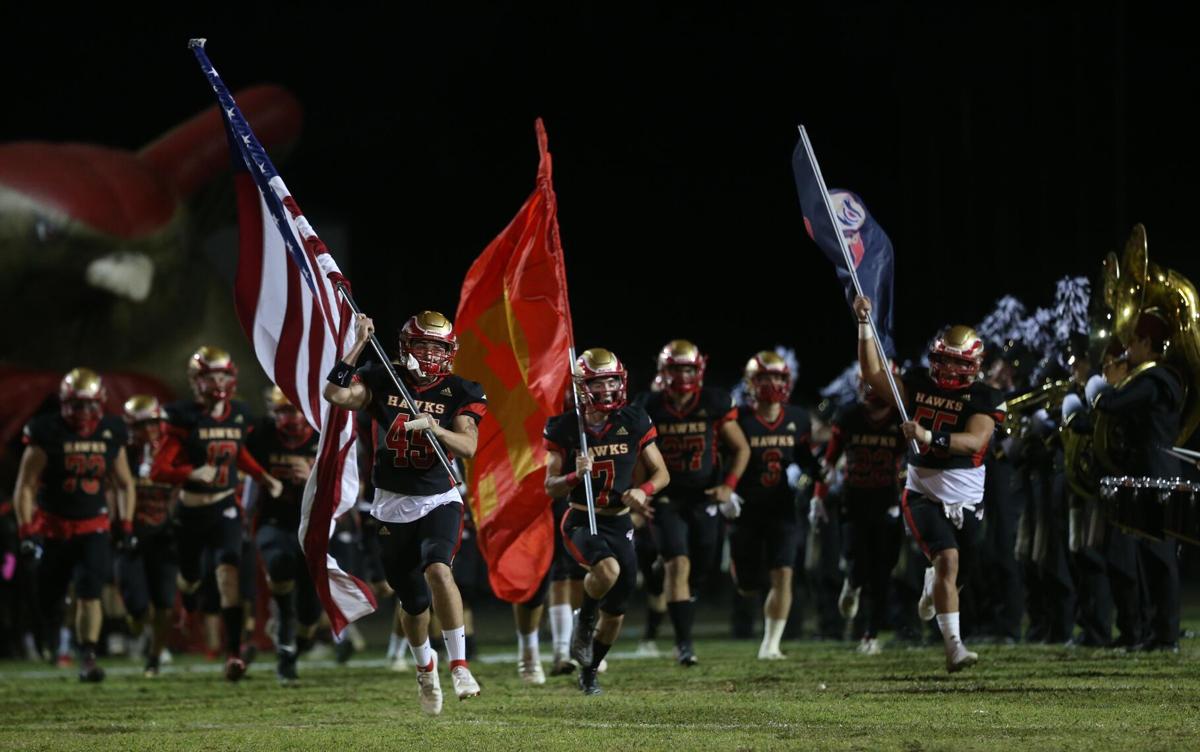 Centennial High School's varsity football team runs onto the field before the start of their game against Liberty High School. 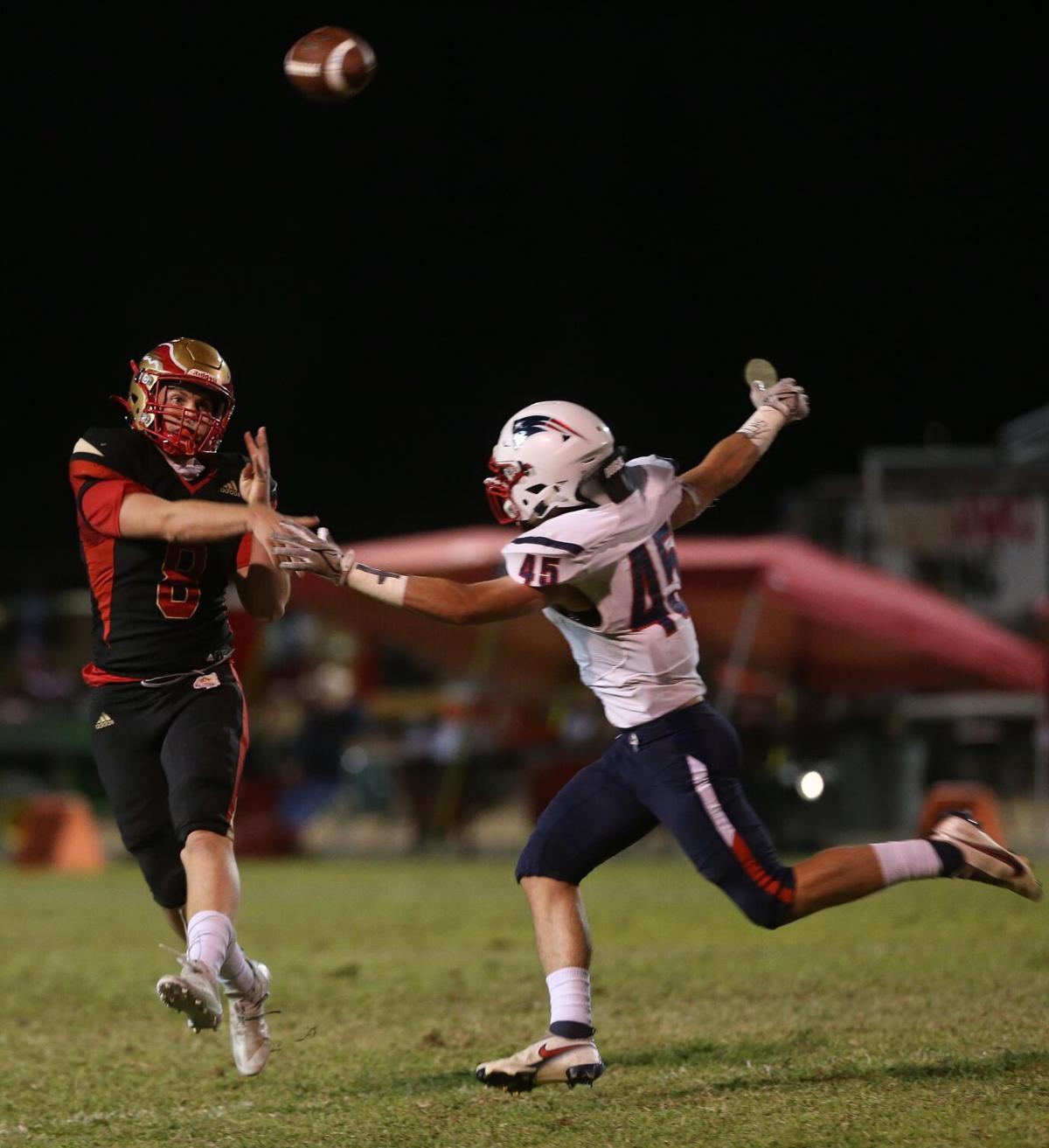 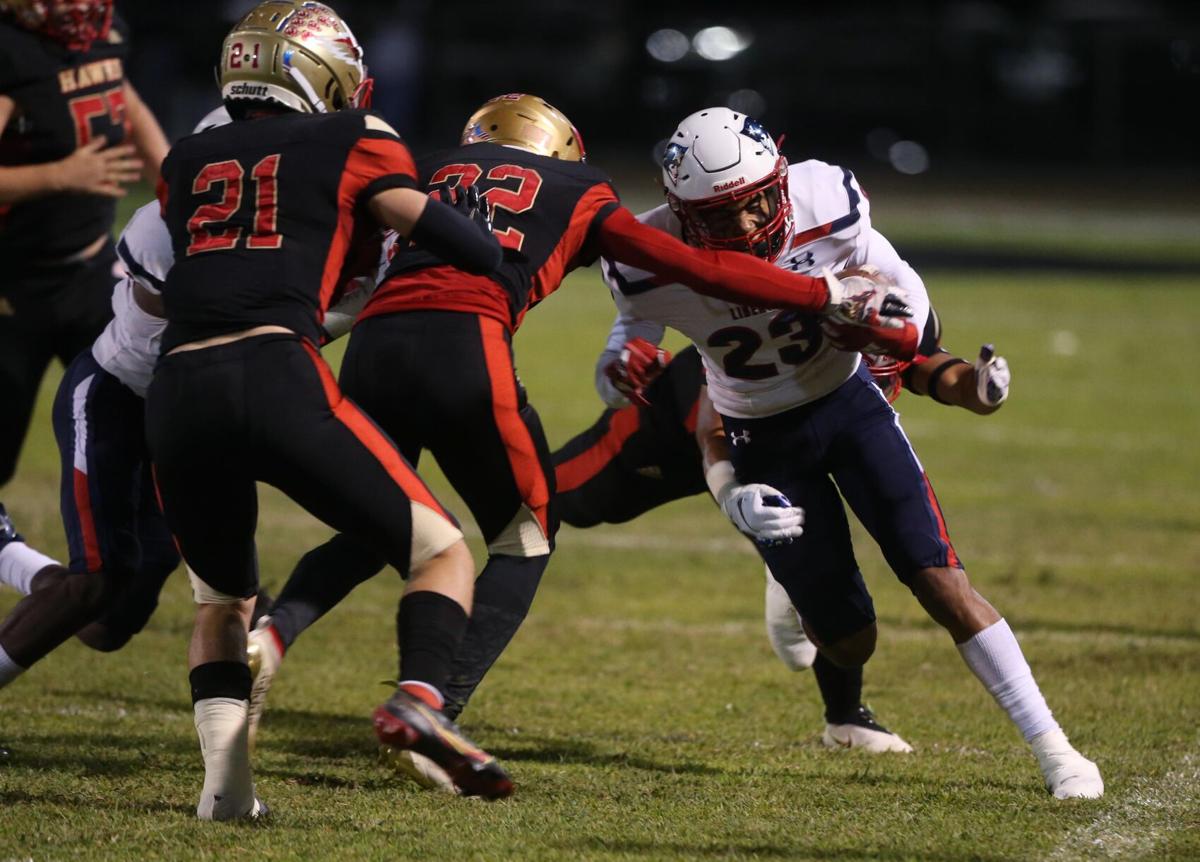 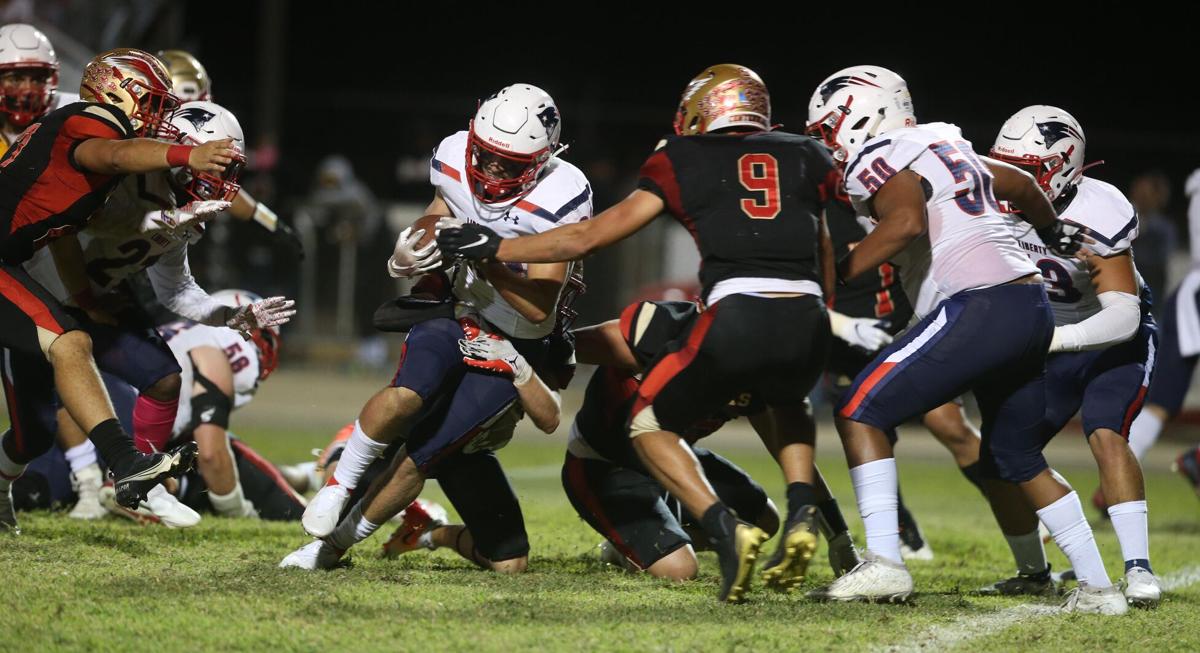 Liberty's RB Grant Austin eventually runs his way to the endzone in first-quarter action against Centennial. 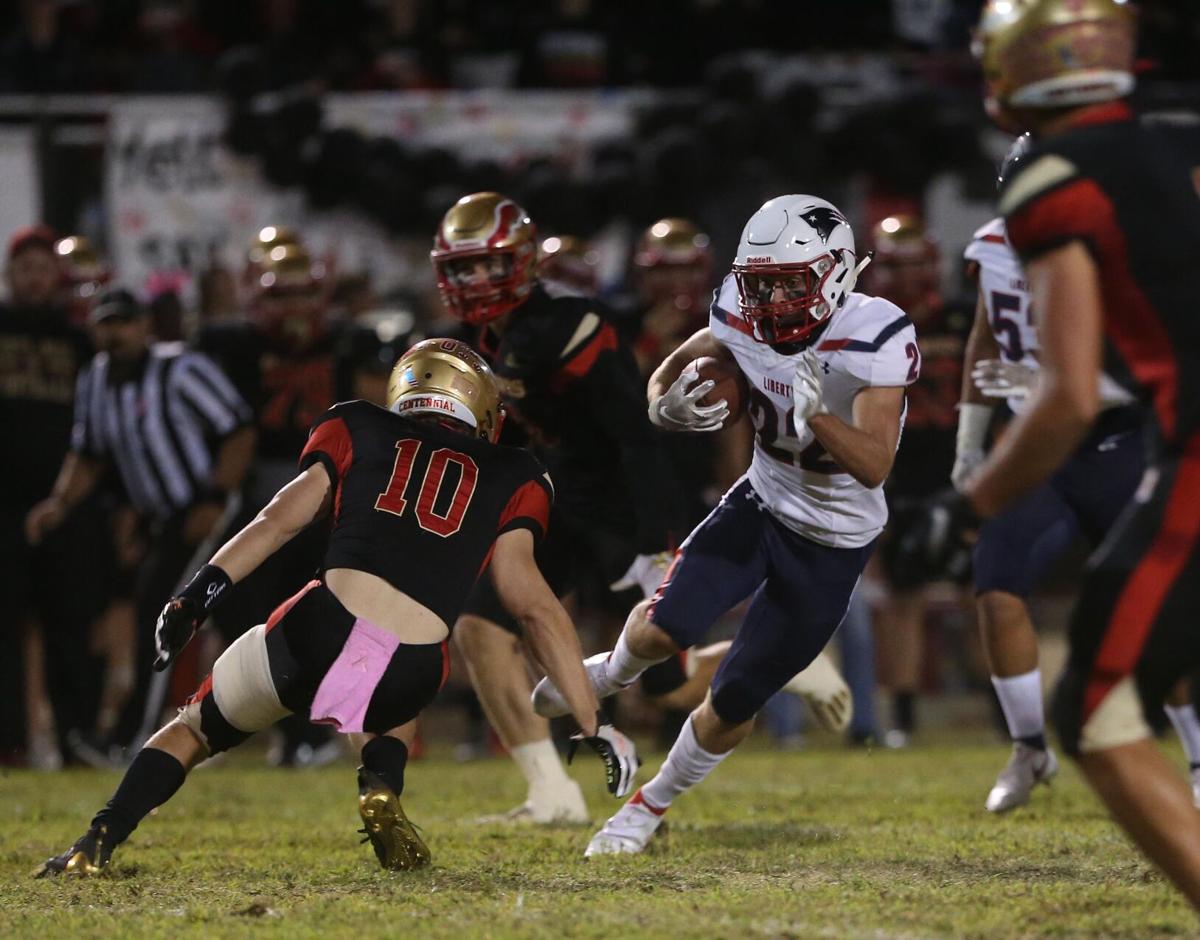 Liberty's RB Grant Austin breaks into the secondary in first-quarter action against Centennial.

Liberty running back Grant Austin breaks into the secondary in first action against Centennial.

Liberty RB Grant Austin eventually runs his way to the endzone in first action against Centennial.

Centennial High School's varsity football team runs onto the field before the start of their game against Liberty High School.

Liberty's RB Grant Austin eventually runs his way to the endzone in first-quarter action against Centennial.

Liberty's RB Grant Austin breaks into the secondary in first-quarter action against Centennial.

Whatever suspense there might have been when Liberty and Centennial met on the football field Friday night sure didn’t last long.

The visiting Patriots scored two touchdowns in the opening four minutes — before even taking an offensive snap — and put things out of reach midway through the first half in a 51-21 Southwest Yosemite League victory.

“We met this morning and talked about putting a complete game together, in all three phases,” Liberty coach Bryan Nixon said. “To come out and start the way we started, you know we didn’t have an offensive play until 2:43 left in the first quarter, and we’re ahead two scores. So I’m really please with the way they came out and accepted the challenge.”

Liberty (5-2, 2-0) scored just about every way imaginable, dominating play in every aspect of the game.

“They really did put together a complete game, I think we scored in all three phases,” Nixon said. “We scored defensively, offensively and special teams, and for them to accept that challenge and do what they did, I’m proud of them. It’s a nice job for step 2 and phase 2.”

The scoring started early when Grant Buckey blocked a punt on the Golden Hawks’ opening possession of the game and teammate Beckam Nilsson returned it for a touchdown just 2:36 into the game.

“We just really wanted to prove what we could be as a team, and just how good we can be if we work as a team,” said Buckey, who had two sacks and several hurries on the night. “We just wanted to be physical off the ball and take the game to them.”

The Patriots defense did that all night, keeping the Golden Hawks and quarterback Levi Manning off balance with relentless pressure. Liberty sacked Manning seven times and had three interceptions, including two by Hankins, and another by Kresean Kizzy.

“It was amazing.” Hankins said. “It was super fun. We really wanted to execute in all three phases of the game, and I feel like we really did that.”

Hankins’ second pick was returned 48 yards for a touchdown, his third touchdown of the game, which gave the Patriots a 51-7 lead with 5:21 left in the third quarter. He also ran for a 10-yard score in the second quarter.

“It’s such a fun game and to come out here as a team, especially against a rival school, and to get a big win, it feels really good,” Hankins said. “Hopefully we can keep the momentum going.”

Despite the lopsided score, Centennial had its moments.

After falling behind quickly 14-0, the Golden Hawks moved the ball down field before stalling at the Liberty 15. Facing a fourth-and-11, Manning was hit by Buckey just as he threw, and his pass toward the end zone missed its mark.

Just six plays earlier, Manning eluded a heavy rush and threw an apparent touchdown to Jaxton Santiago that would have cut the deficit to 14-7 with 3:18 left in the first quarter. But Centennial was whistled for an illegal man downfield, and followed that with a delay of game penalty to create a first-and-25 from the 29.

The Golden Hawks finally broke the shutout midway through the second quarter when Manning and Santiago connected on a 33-yard scoring play with 8:12 left in the first half to trim Liberty’s lead to 28-7. Santiago finished with seven catches for 122 yards.

With the game in hand, aided by a running clock the final 17 minutes of play, Liberty began to sub freely, and the Golden Hawks capitalized late in the game with a pair of fourth-quarter touchdowns.

Manning finished with 263 yards on 15 of 25 passing and two touchdowns. He also ran for another at the start of the fourth quarter. Centennial capped the game’s scoring on a 25-yard touchdown pass from Manning to running back Jackson McDonald.

Liberty utilized a balanced offensive attack, finishing with 151 yards passing and 133 on the ground. Senior Grant Austin had a game-high 58 yards rushing and three short TD runs, including one from three yards out that gave his team a 42-7 lead with 1:49 left in the first half.

The lead moved to 45-7 early in the second half when Grant Meadors nailed a 40-yard field goal with 8:04 left in the third quarter.

Patriots quarterback Carson Woods also had an efficient night, completing 11 of his 13 passes, utilizing six different receivers. Jason Oliver, who had two carries for 27 yards to open the game, finished with three catches for 54 yards.

“We’re excited about the win and how the kids played,” Nixon said. “We wanted to start playing well, and getting better, and stop eliminating some of those mistakes. And I think they did that tonight. We just have to keep building on that, working on the little things and doing that the rest of the season.”