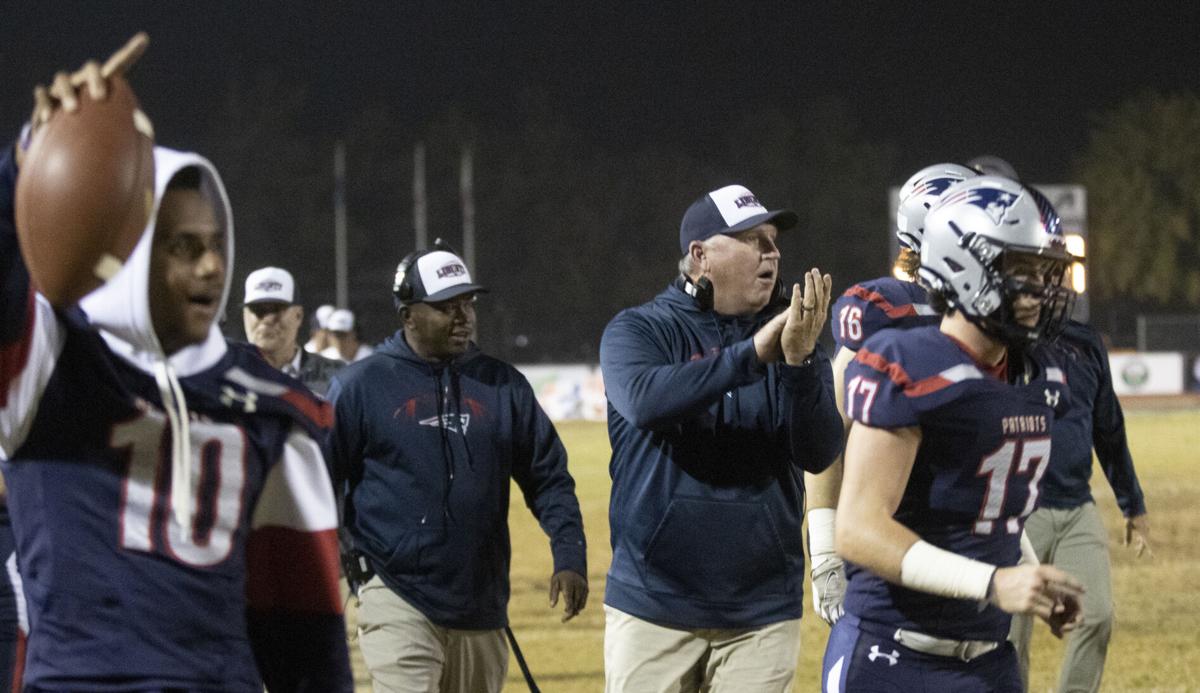 The Liberty sideline reacts to a touchdown during Friday night's win over Bakersfield. 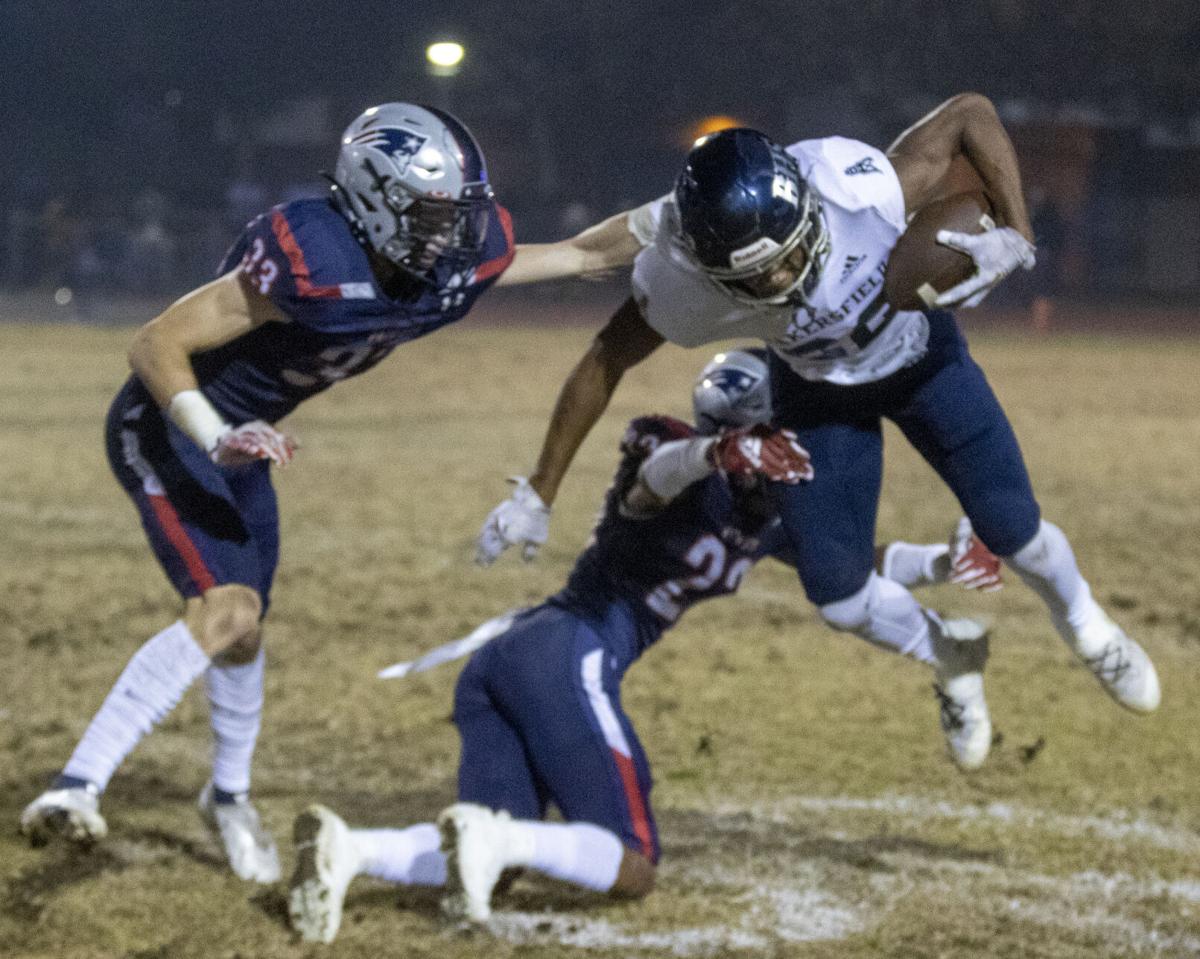 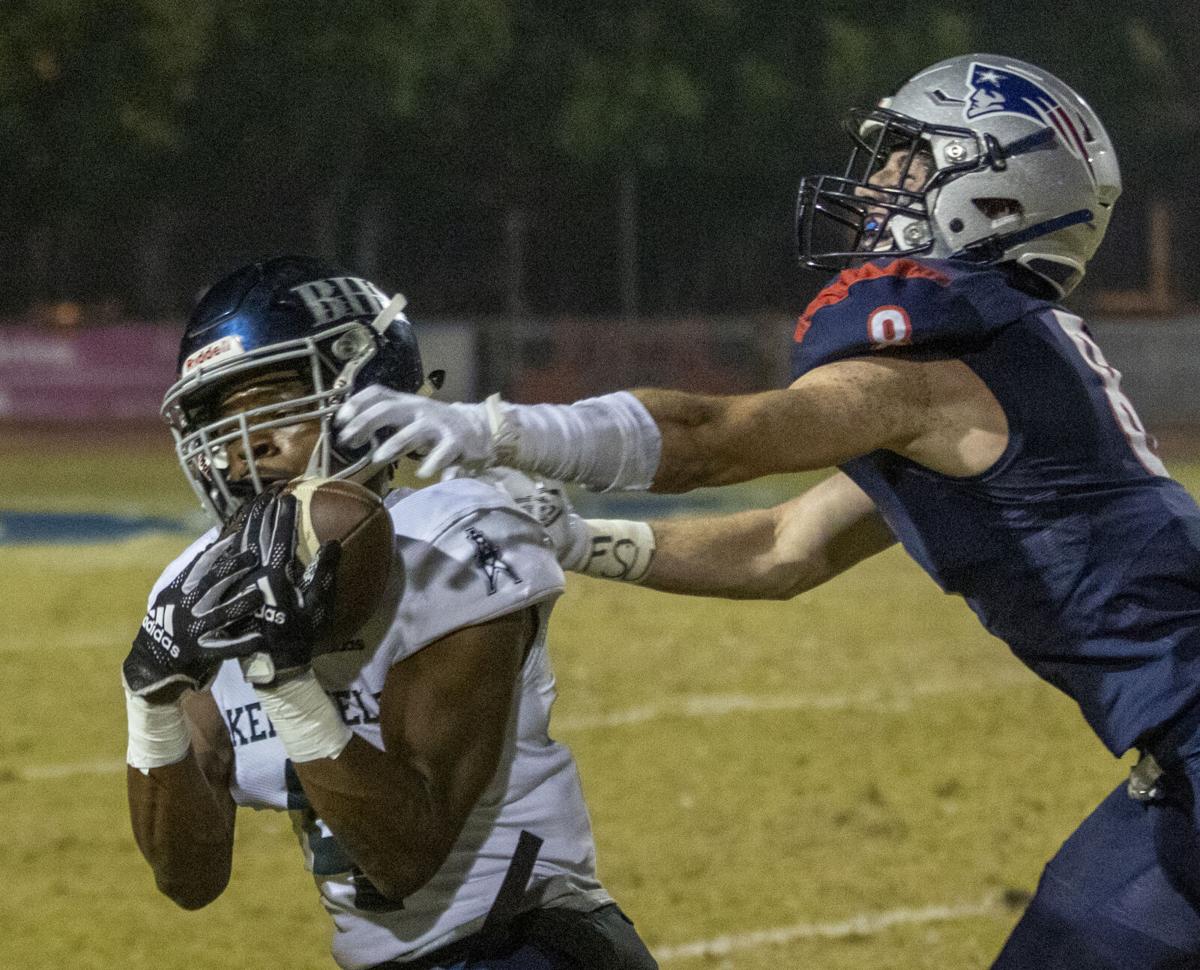 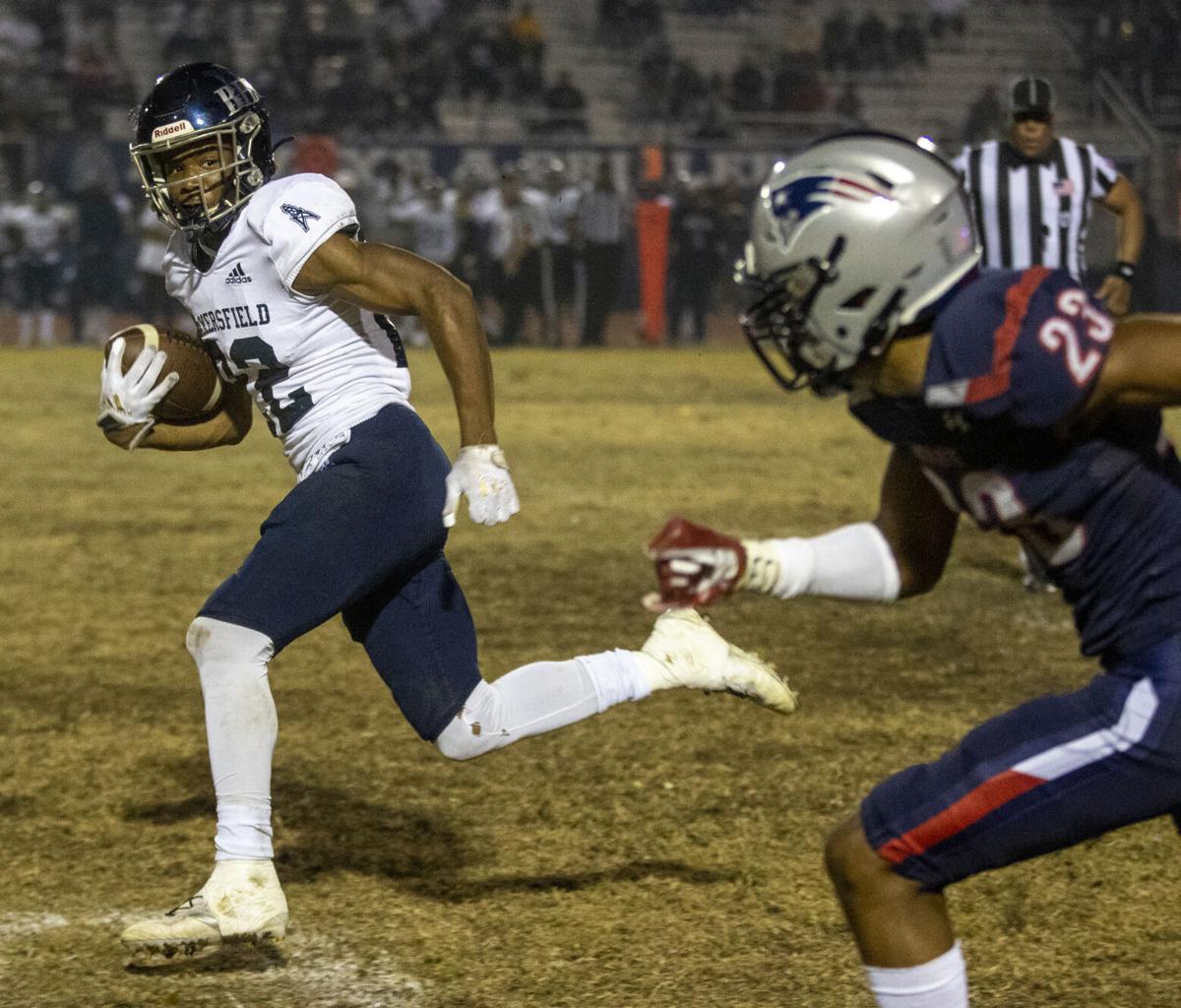 Liberty's Jason Oliver could not keep up with Tybo Rogers of BHS, who scored a touchdown. 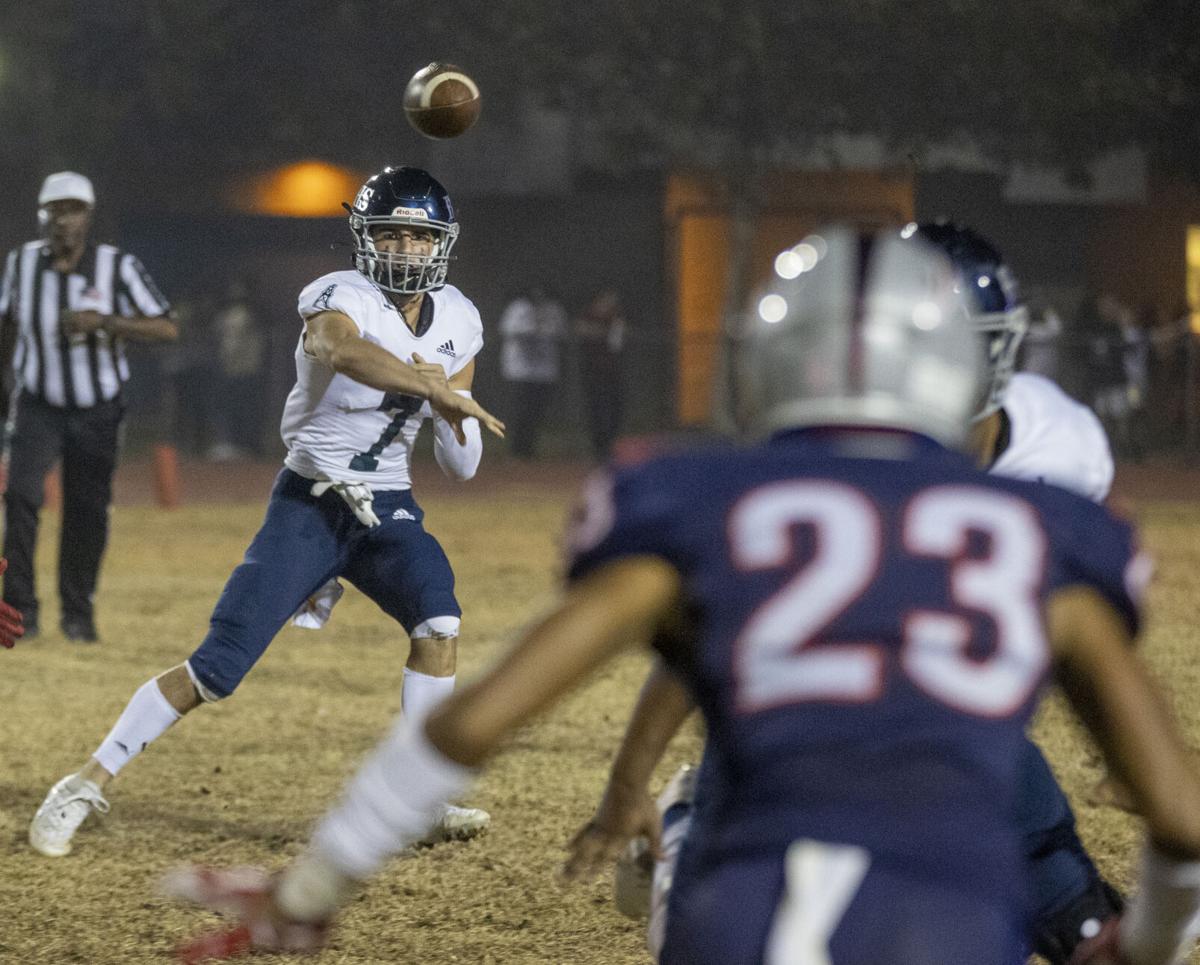 BHS quarterback Ty Monteiro gets a short pass off in time. 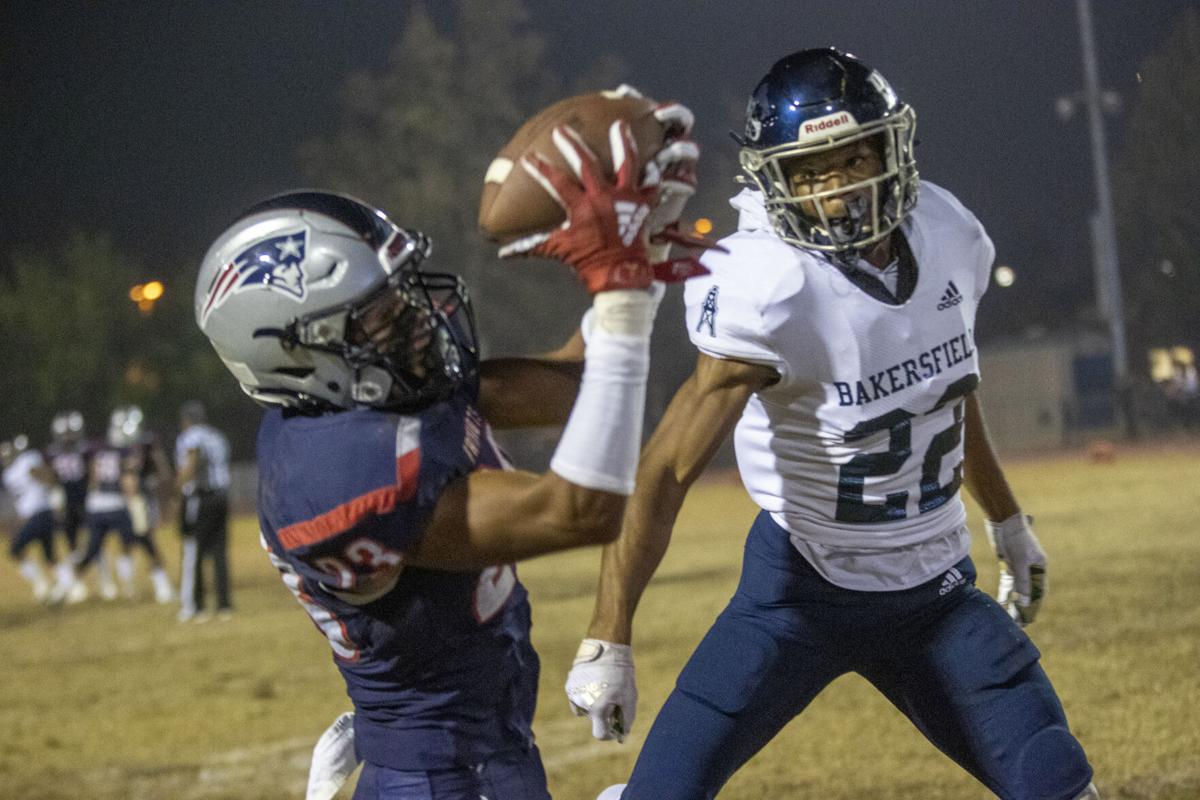 Tybo Rogers of BHS was able to stop Liberty's Jason Oliver from catching the ball on the sideline. 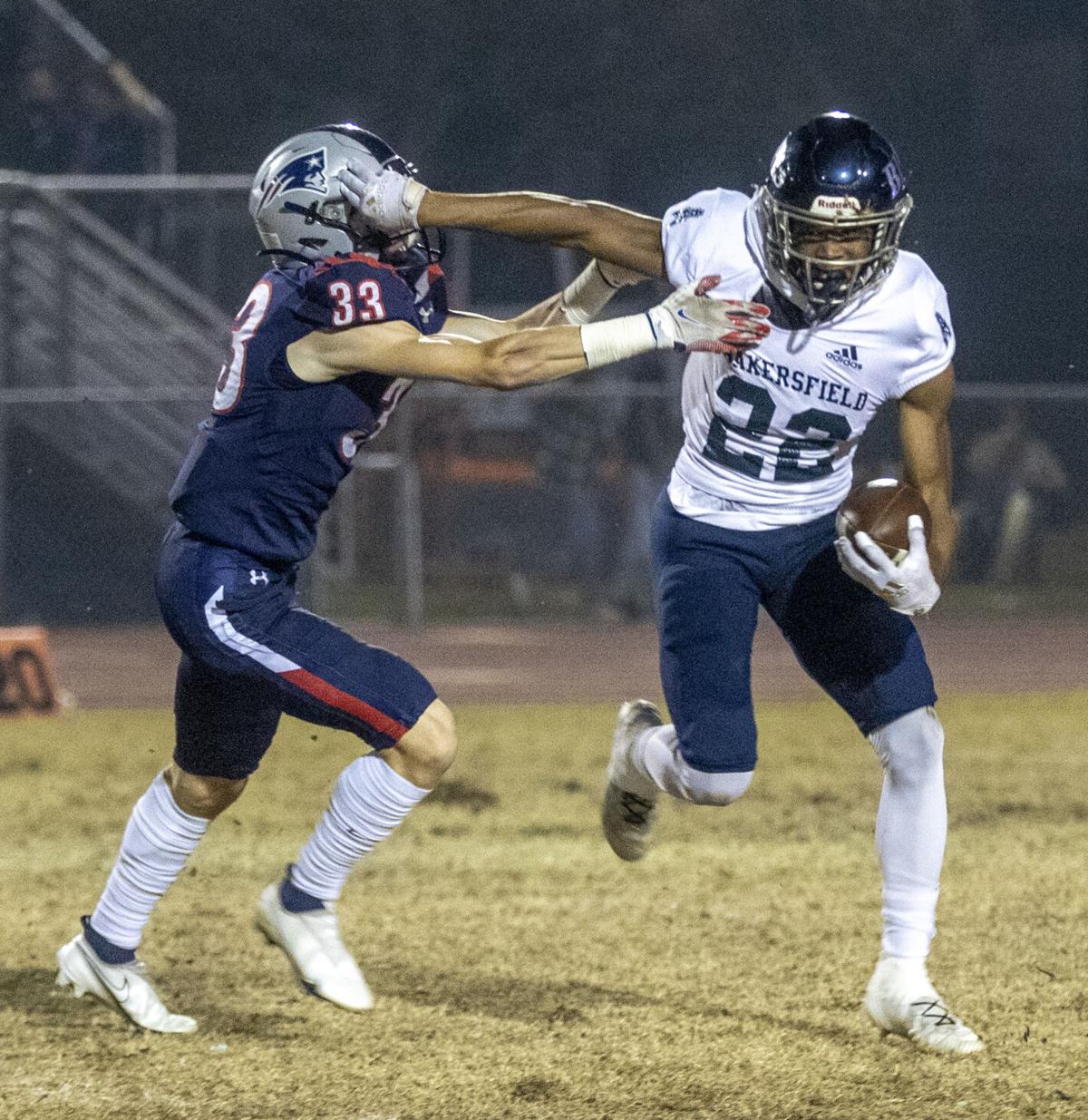 Liberty's Caleb Reiswig grabs onto Tybo Rogers of BHS to bring him down. 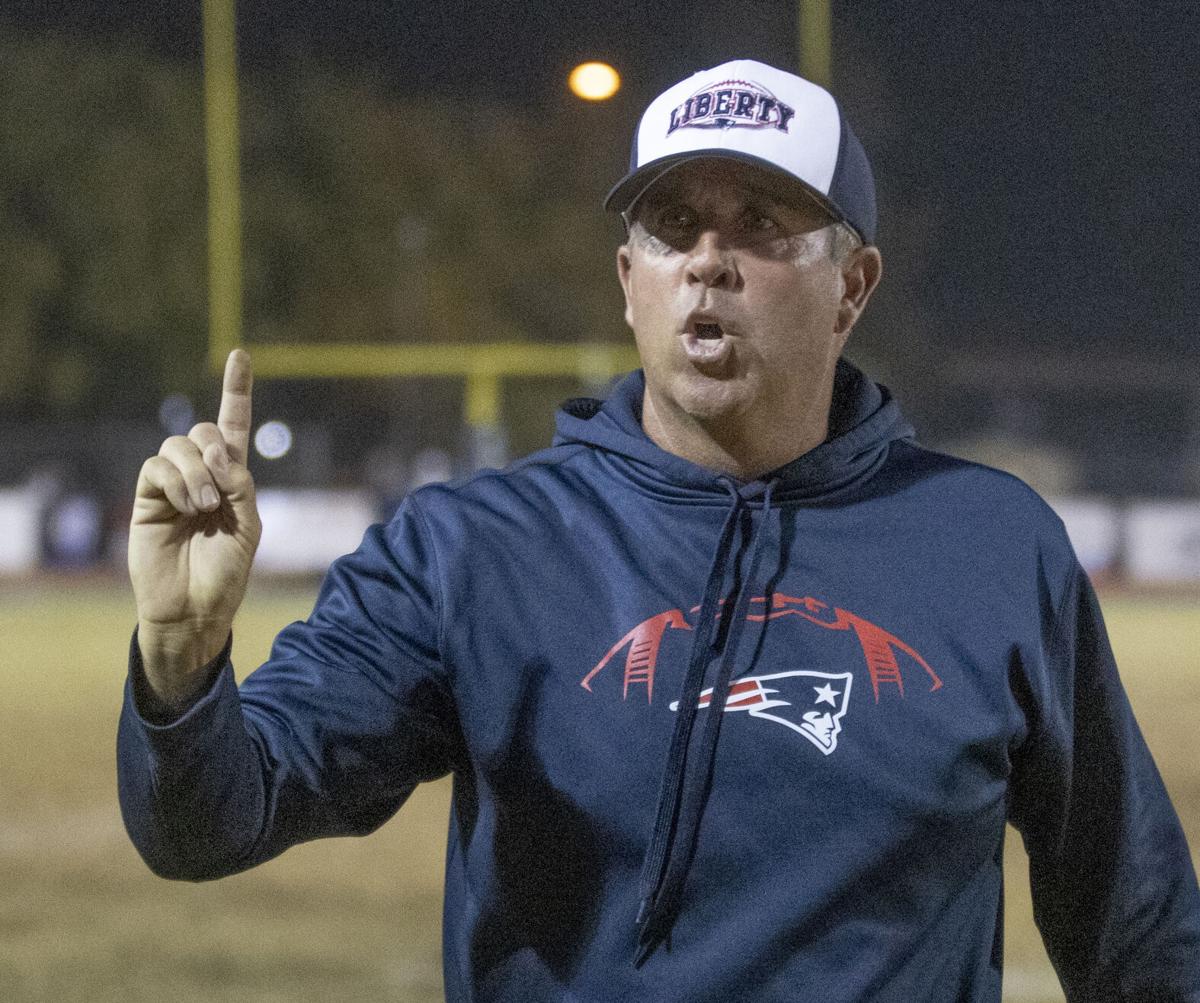 Liberty's coach gestures to show who's No. 1.

The Liberty sideline reacts to a touchdown during Friday night's win over Bakersfield.

Liberty's Jason Oliver could not keep up with Tybo Rogers of BHS, who scored a touchdown.

BHS quarterback Ty Monteiro gets a short pass off in time.

Tybo Rogers of BHS was able to stop Liberty's Jason Oliver from catching the ball on the sideline.

Liberty's Caleb Reiswig grabs onto Tybo Rogers of BHS to bring him down.

Liberty's coach gestures to show who's No. 1.

Tybo Rogers could only keep the Drillers going for so long.

Bakersfield High's junior standout had a 68-yard touchdown run, an 80-yard touchdown reception and an interception of Liberty quarterback Carson Woods in the first half. He remained BHS's Tye Monteiro's favorite target throughout the second.

But Rogers also had a key fumble late in the third quarter that gave the Patriots the ball at BHS's 8-yard line, allowing them to take their first lead of the game. Liberty outscored BHS 27-3 in the second half for a 37-23 victory and a league title.

Junior running back Jalen Hankins had 18 carries for 82 yards with three touchdowns, plus four catches for 61 yards, on a slow night for the dynamic Liberty (7-2, 4-0) offense. BHS (3-5, 2-2) led 20-10 after the first half but committed four turnovers in the second.

"We knew the game wasn't over," Hankins said. "We played four quarters with all our heart. We came out in the second half with great intensity."

BHS had notched a few wins under interim coach Rashaan Shehee and came ready to face its rivals Friday night. The Patriots scored first after Carson Woods connected with Jason Oliver for 28 yards and then Kresean Kizzy for 31 and a touchdown. But the Drillers needed just three plays for Rogers to hit a hole with great speed and sprint 68 yards for a tying touchdown.

"They played the toughest preseason schedule, I know in the valley, if not wider," Liberty coach Bryan Nixon said. "We knew what it was gonna be — we're really proud of our kids and how they played tonight."

BHS's defense forced a three-and-out, then the offense struck back. Monteiro found Daylon Leach for 25 yards, but the drive nearly stalled before Liberty jumped offsides to turn a third-and-6 into a third-and-1. After Rogers converted, Monteiro finished the drive with a sneak for the score. BHS mishandled the extra point, which evened out later when Liberty missed a PAT of its own.

BHS reclaimed the ball two plays later when Anthony Rivera popped the ball free for Christopher Qualls to recover. But the Drillers gave it right back when Leach fumbled into the end zone on a long pass from Monteiro.

Liberty cut the deficit to three points with a 36-yard field goal. Once again, though, the Drillers responded immediately, as Monteiro found Rogers in man coverage, and the do-it-all offensive weapon outmaneuvered Oliver on the sideline to make the catch and run 80 yards for the score. Rogers then intercepted Woods three plays into Liberty's next drive.

The Patriots had a chance to add points before the half following a great individual play by Hankins, who took a screen pass 41 yards on a winding run across the field. But Liberty missed a field goal, leaving the score at 20-10 at halftime.

The Patriots emerged from the locker room on a mission. They took just five plays, including a long reception by Kizzy, to set up Hankins' first touchdown. And this time the Drillers failed to respond. Monteiro found Rogers for a 33-yard completion, but BHS turned it over on downs, gaining just seven yards in its ensuing four plays.

The Patriots nearly gave the ball back, but Kizzy fell on a Woods fumble. Then Rogers, making his lone mistake of the game, turned it over to set up an easy score for Hankins.

Once the Drillers fell behind, their offense initially seemed to fall apart. Monteiro tried to make too much happen on a second-and-24 and was intercepted by Luke Wattenbarger. But still, on BHS's next drive, change-of-pace back Drahcir Mackey ran for 26, and another long completion to Rogers set up a tying field goal to make it 23-23.

"A battle to win one of these games, it feels good," Hankins said. "It really brings the team together."

Coming together for the Patriots meant turning to the running game. Taking over with just under six minutes remaining, they ran the ball six straight times and took a 30-23 lead with 2:30 to go. The game ended in frustrating fashion for the Drillers when Monteiro threw a pick-six to Kizzy just two plays later.

"People are going to see the mistakes that we made in the second half," Drillers coach Rashaan Shehee said, "and (those are) things that we're going to continue to work on, but the fight that we had from beginning to end? Super proud of my guys."

The win clinched a Southwest Yosemite League title for Liberty, its seventh in the last eight years. Liberty is in line for a mid-Division I playoff seed after sitting at fifth in last week's rankings. BHS will likely retain a high seed in Division II.