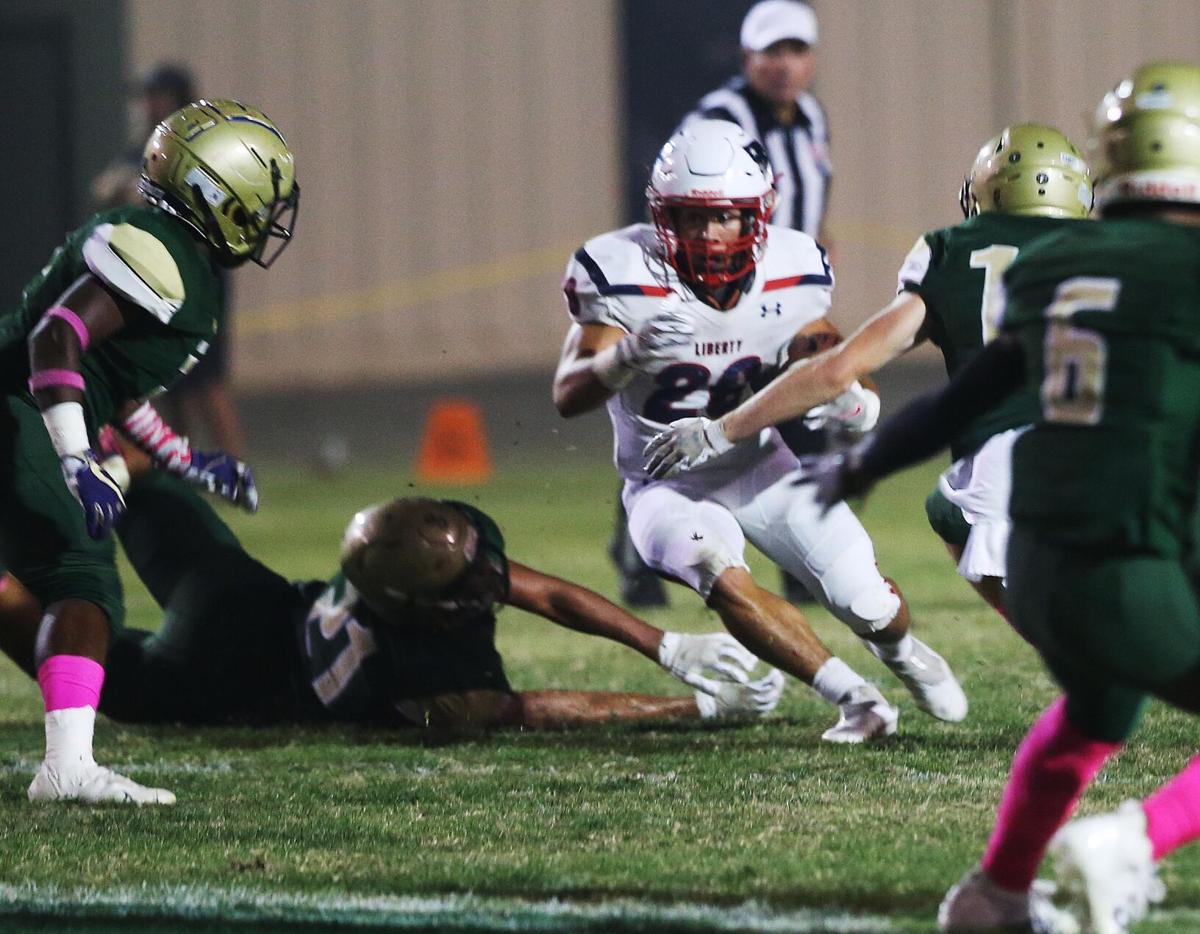 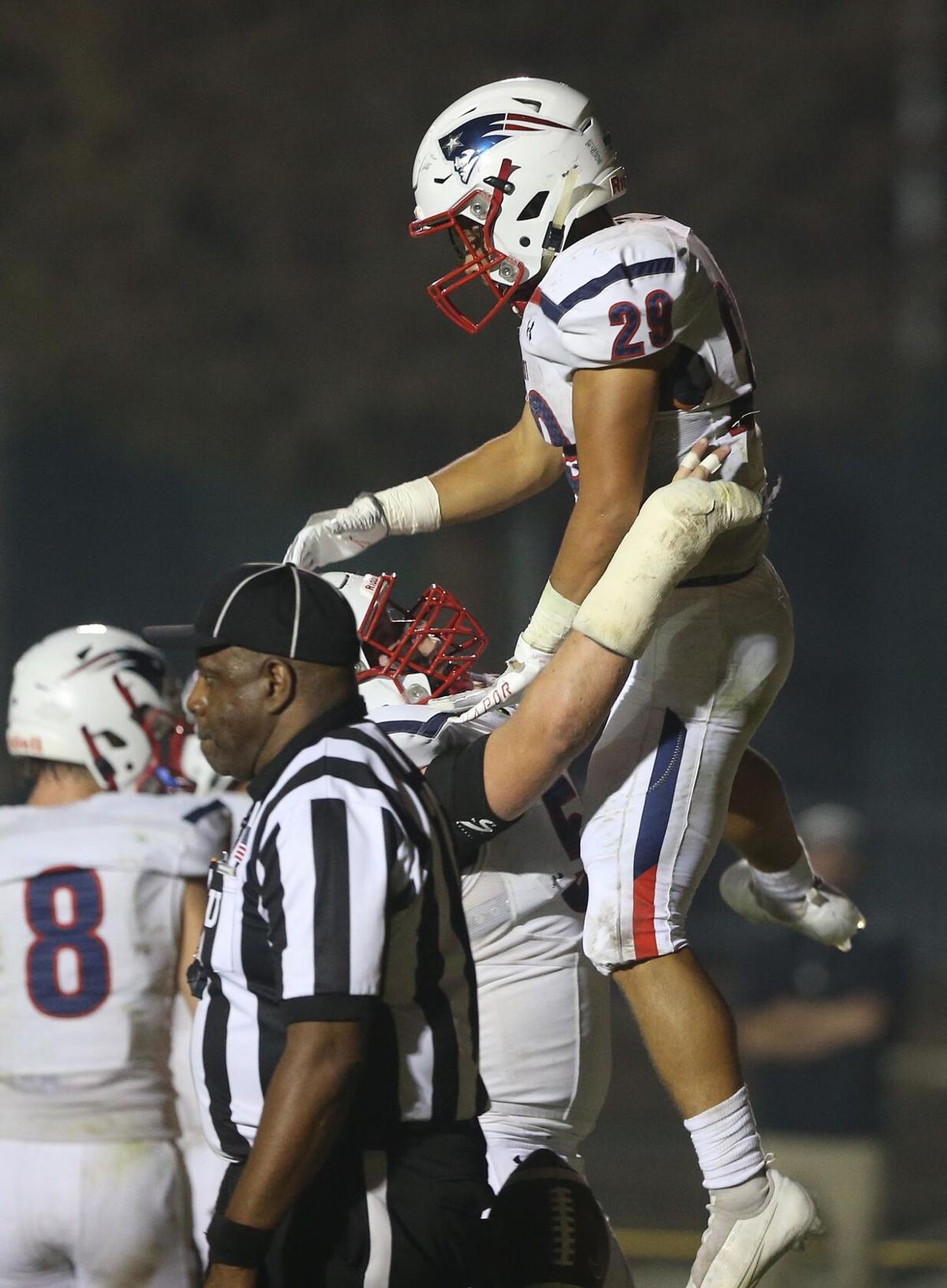 Liberty RB Jalen Hankins celebrates his touchdown with a teammate against Garces High on Friday night. 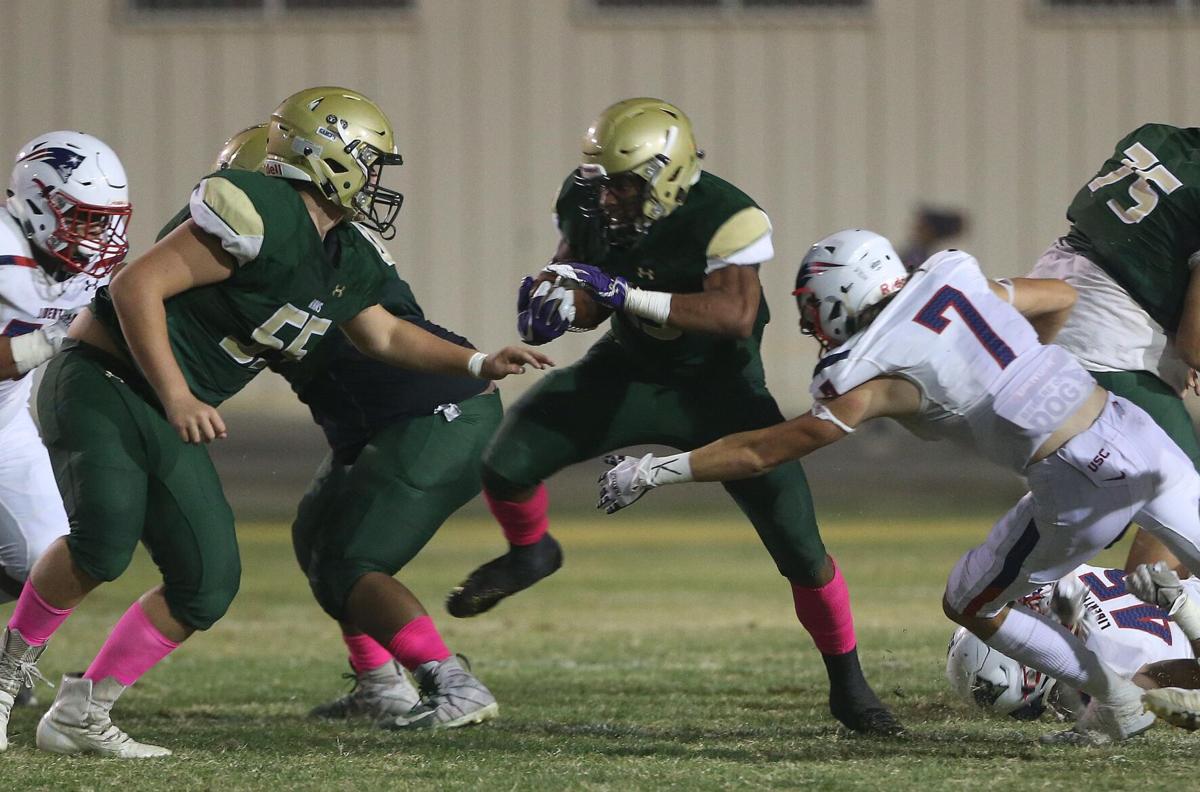 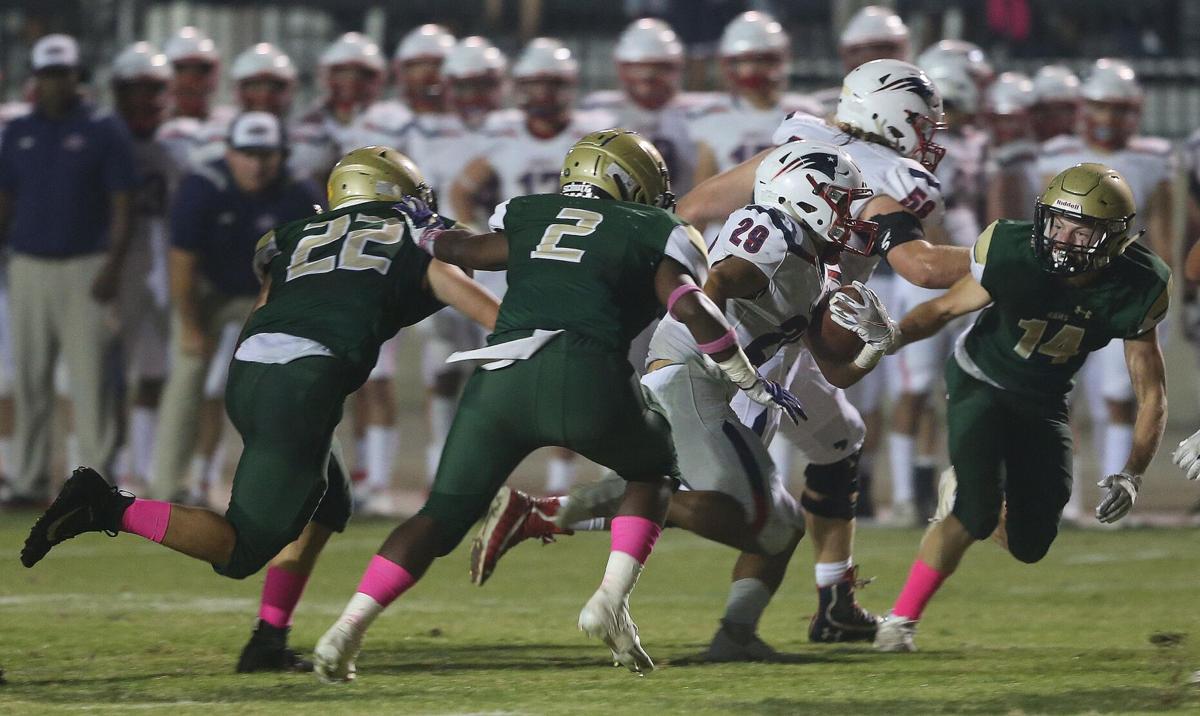 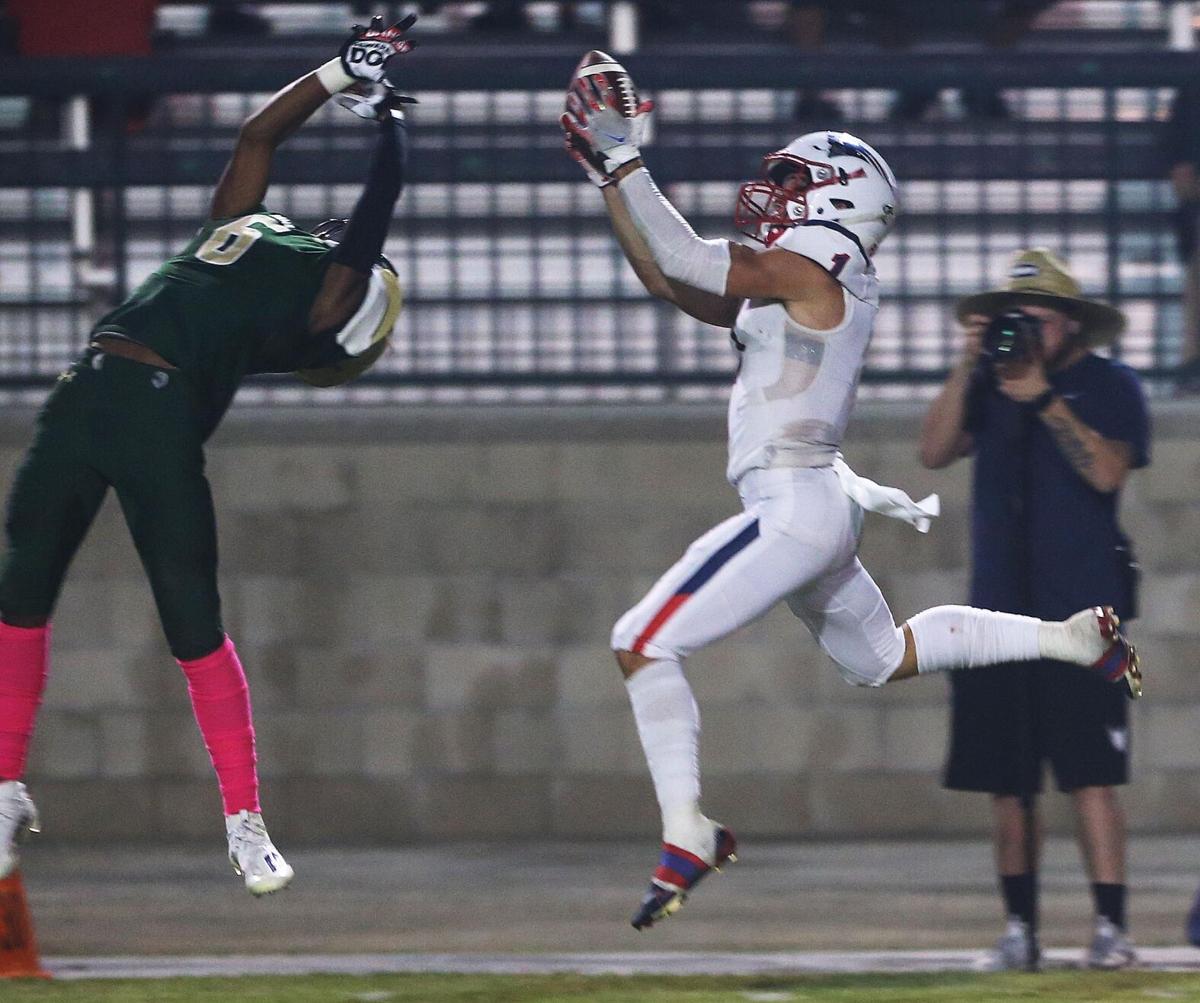 Liberty WR Austin Pratt catches a long pass for a touchdown through the outstretched hands of Garces SS Cage Williams on Friday night. 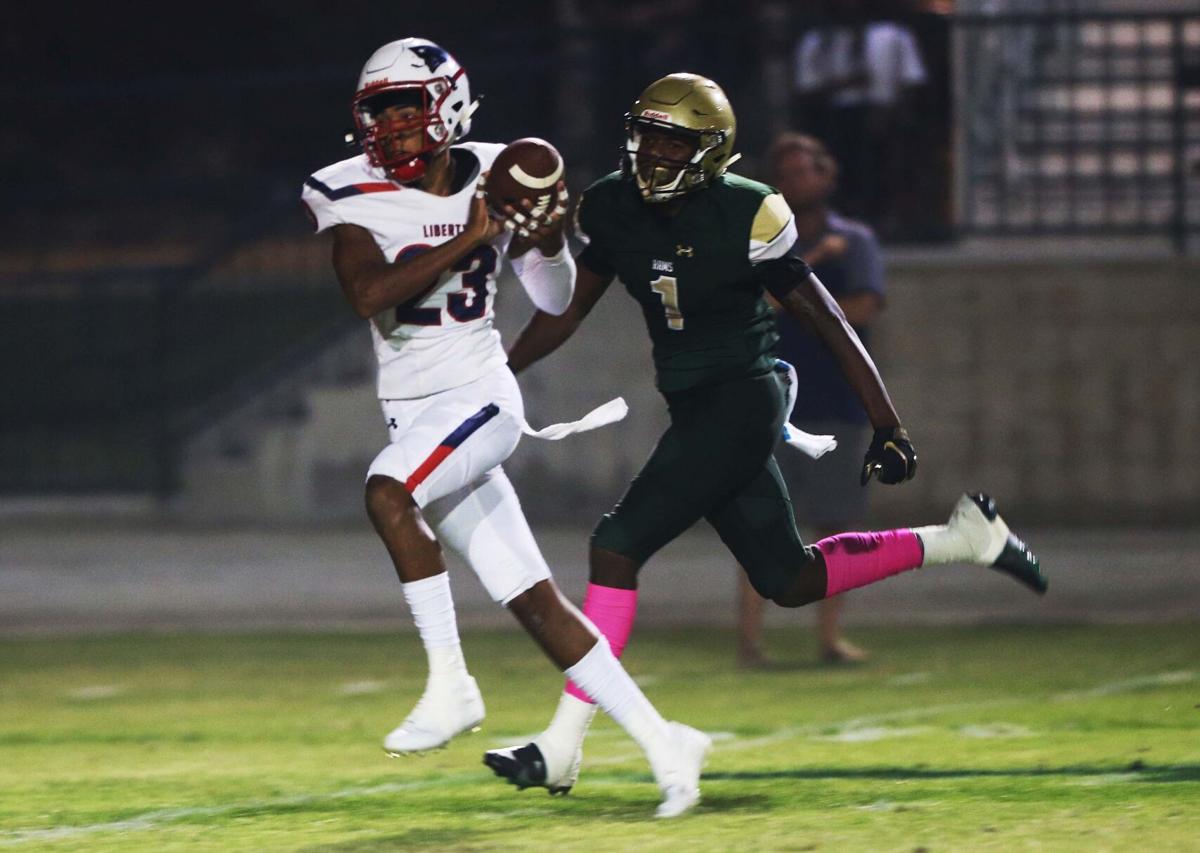 Liberty WR Jason Oliver catches a pass for a touchdown in first quarter action against Garces High on Friday night. 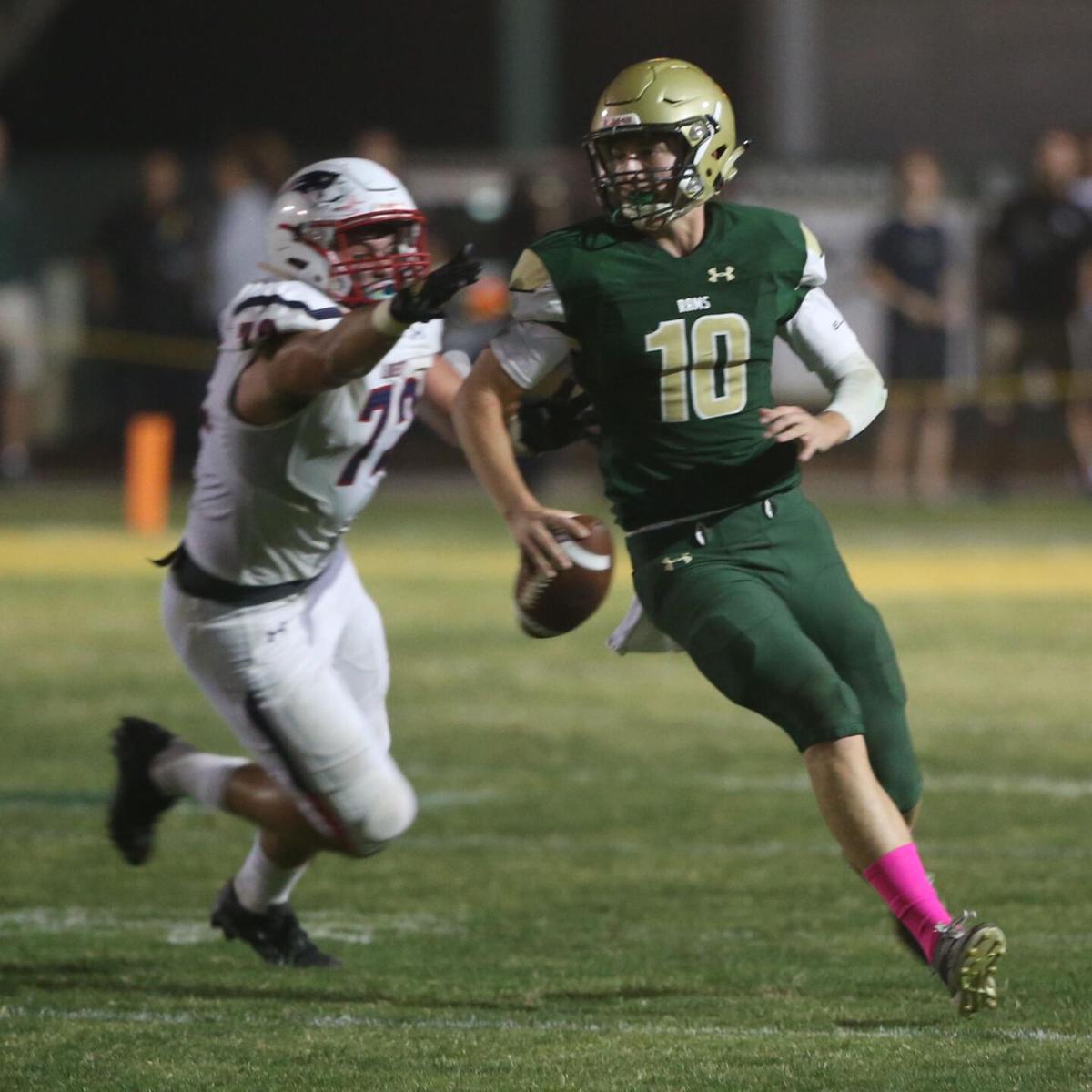 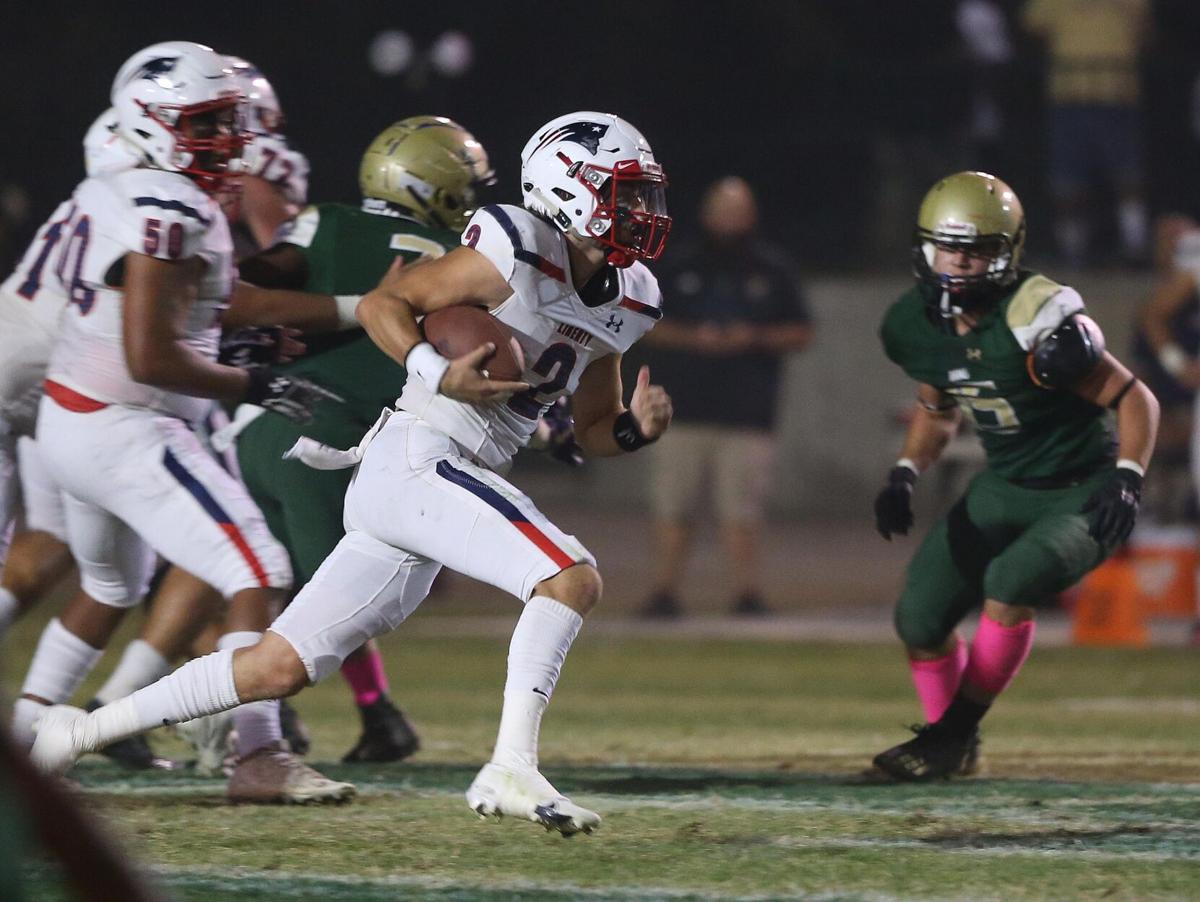 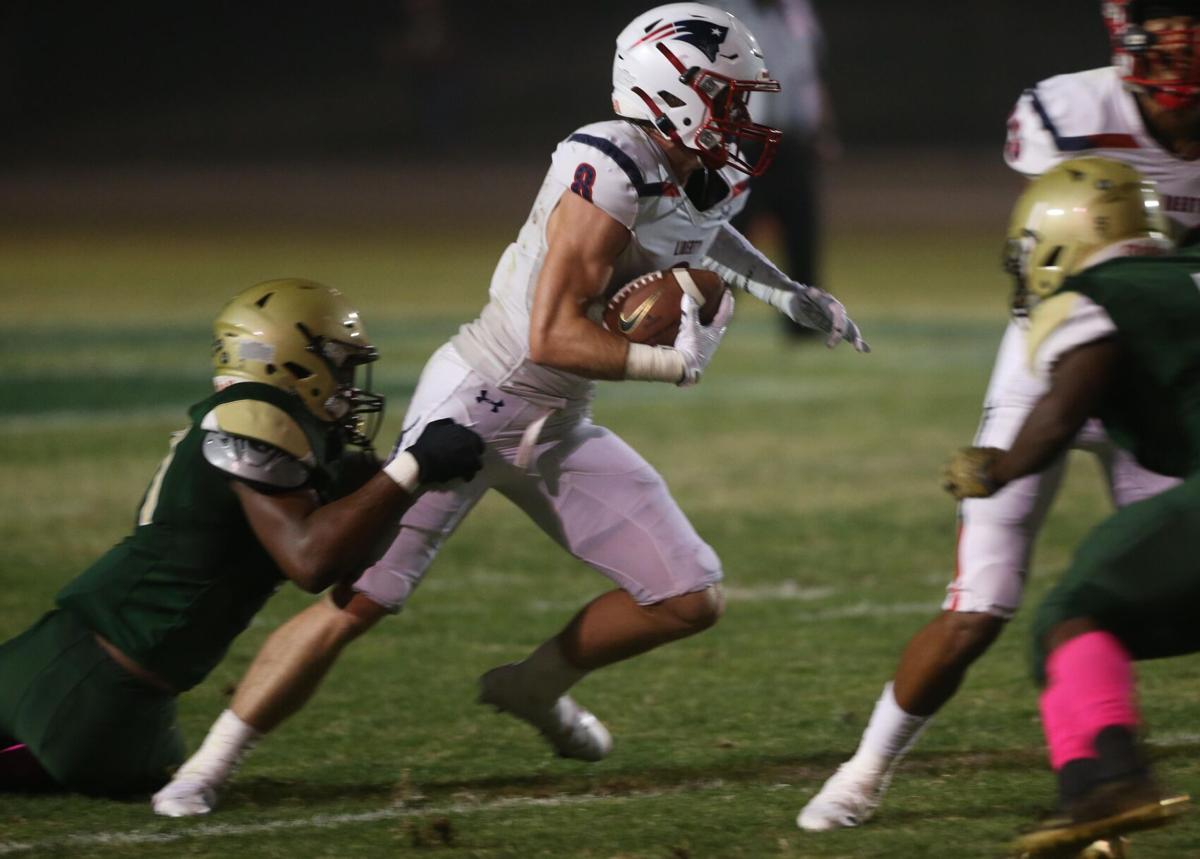 Liberty WR Luke Wattenbarger catches a pass for a short gain against Garces on Friday night.

Liberty RB Jalen Hankins celebrates his touchdown with a teammate against Garces High on Friday night.

Liberty WR Austin Pratt catches a long pass for a touchdown through the outstretched hands of Garces SS Cage Williams on Friday night.

Liberty WR Jason Oliver catches a pass for a touchdown in first quarter action against Garces High on Friday night.

Liberty WR Luke Wattenbarger catches a pass for a short gain against Garces on Friday night.

Any thoughts that the Liberty football team is ready to relinquish control of the Southwest Yosemite League were wiped away Friday night at Tobias Field.

The Patriots, winners of three straight SWYL titles, demonstrated that point by building a big first-half lead en route to a 26-7 victory over Garces, the team’s 16th consecutive league victory.

“The kids came out and played hard,” said Liberty coach Bryan Nixon, whose team has won 19 straight games against Kern County opponents. “I think our defense was lights out. I think they were on the field the entire third quarter. We had a turnover and too (short) punts, but our defense kept them out of the end zone.”

Both teams entered the game ranked among the top teams in the Central Section, with MaxPreps having Liberty at No. 5 and Garces at sixth.

But Friday night was the Patriots’ night.

Senior quarterback Carson Woods threw two long first-half touchdown passes and junior two-way star Jalen Hankins made big contributions on both sides of the ball, holding the Rams in check most of the night in the league opener for both teams.

Woods got things started on his team’s second play from scrimmage, connecting with Jason Oliver on a 49-yard touchdown pass for an early 7-0 lead.

“I’m very proud of them,” said Nixon, whose team improved to 4-2. “Overall a good effort by our kids. We came out in the beginning and jumped out fast, and that’s what we wanted to do.”

Following the ensuing kickoff, the Rams (3-3) fumbled and Hankins recovered at the Garces 20-yard-line. But Liberty failed to move the ball, and when Dylan Lynch’s 31-yard field goal attempt missed just left, the Rams were given new life, at least momentarily.

Rams quarterback Travis Plugge busted off a 39-yard run on first down and Garces moved the ball to the Patriots’ 27. But the drive stalled, and Palmer Bank’s 50-yard field goal attempt was blocked by Deon Williams.

The missed opportunity was one of many for the Rams on Friday night.

Seven plays later, Liberty’s Grant Meadors nailed a 41-yard field goal to make it 10-0, the first of four-straight scoring drives for the Patriots.

Hankins capped a 13-play, 59-yard drive with a 2-yard touchdown early in the second quarter, and after a Garces punt, Woods hooked up with Austin Pratt for a 57-yard scoring pass to build the lead to 23-0 with 1:26 left in the first half. Pratt out jumped a Garces defender on the play, spun to the outside and sprinted along the eastern sideline for touchdown.

“Everybody did their job tonight,” said Hankins, who finished with a game-high 89 yards rushing on 20 carries. “I feel like we could bring it up a little bit more, but it felt good. It was fun tonight.”

The extra point was blocked, but another Garces fumble gave Liberty the ball on the Rams’ 26. Four plays later, Lynch made a 40-yard field goal to make it 26-0 with seven seconds left in the second quarter.

The Garces defense picked up its intensity in the second half, holding Liberty to just 72 yards from scrimmage and twp first downs in the final 24 minutes of play.

But the Patriots defense was equally as impressive all night, making several big plays when the team needed it the most.

Following a Hankins fumble, the Rams drove to the Liberty four-yard-line. Patriots defensive lineman Grant Buckey provided the big blow when he disrupted an attempted option play on a fourth-and-goal play, resulting in a Garces fumble and 16-yard loss.

“Our offense was on our half of the field the entire third quarter, and the fourth quarter for the most part,” Nixon said. “We were able to overcome some of that stuff. I was really pleased with how we played, we just gotta finish better.”

“If I would have gotten the ball out of my hands sooner and if we didn’t have so many false starts, we can move the ball,” Plugge said. “And I think we proved that at certain points.

“They’re a solid team, there’s no doubt about it. But I think if you gave us another chance to get out there, I think the score would be a lot closer.”

The momentum was short lived, however.

Hankins had the second of his two sacks on the Rams final possession of the game, slowing their progress on a drive that ended with an interception by teammate Luke Wattenbarger.

“I thought overall we started off hot, but there’s some things we could have fixed up in the second half,” Hankins said. “We need to start off hot and keep that momentum going. But we’ll fix that in practice this week and come out better next week.”