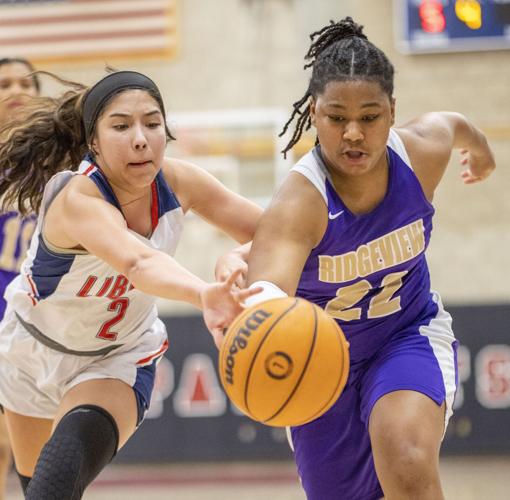 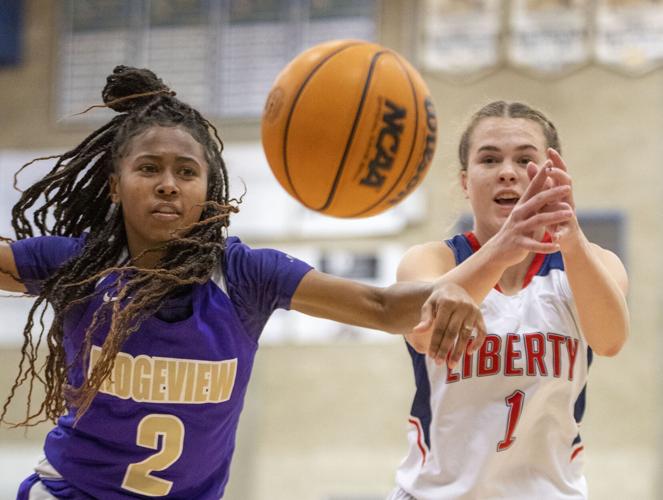 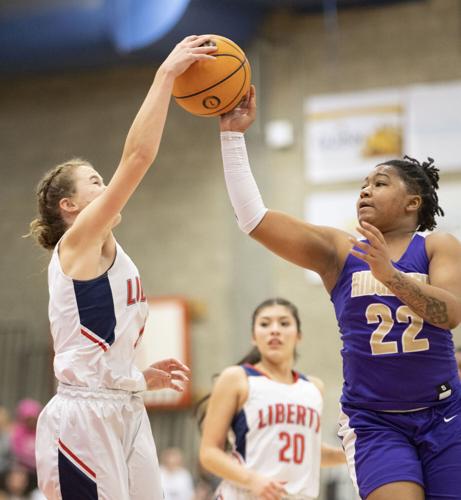 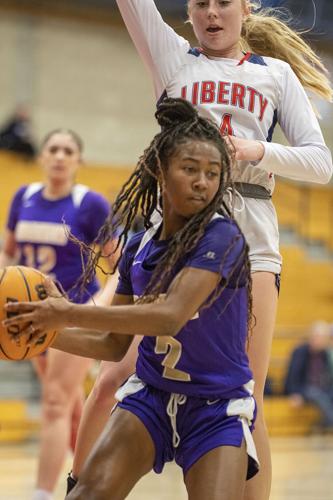 Liberty's Kaylee Batten jumps over Ridgeview's Amya Amey in a fight for a loose ball. 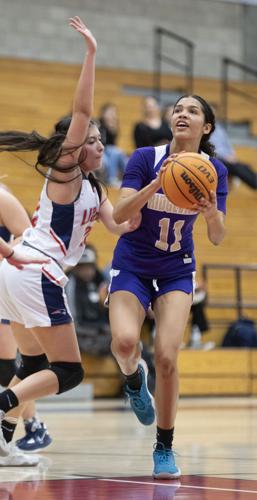 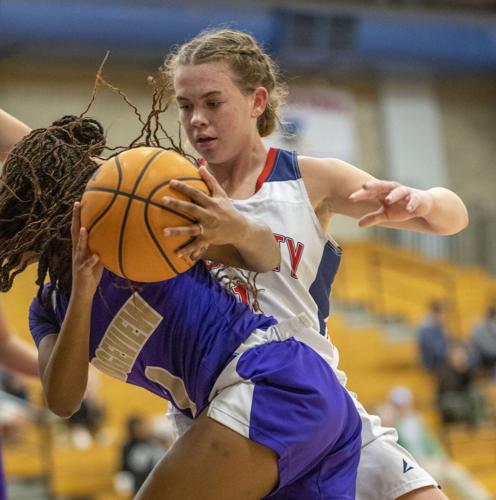 Liberty's Kaylee Batten jumps over Ridgeview's Amya Amey in a fight for a loose ball.

A game that began with Ridgeview committing seven fouls in the first six minutes took an ironic turn three quarters later, as the Wolf Pack was unable to commit a foul when it mattered most.

Clinging to a 34-32 lead thanks to three fourth-quarter baskets by Kaylee Batten, Liberty ran out the final 26 seconds of action Tuesday night with efficient passing and a late shot by Sol Pimentel. Ridgeview's attempts to foul intentionally did not draw a whistle from the referee, and the Wolf Pack missed out on a final chance to put the ball in the hands of playmaking point guard Journie Hayden.

The senior captain Hayden accounted for 20 of Ridgeview's 32 points, but 14 of those (including all four 3-pointers) came in the first half.

"I just wanted to find somebody that wanted to guard her, that really wanted to defend," second-year Liberty coach Damarius Akins said. "... I've known Journie for a long time and I know she can play, and we had a freshman in Jannah Davis that decided to step up and say, 'I'm gonna defend her, I'm gonna do what I have to do to win a basketball game,' and it may not show up in the stat book, but it was a big deal for us tonight."

The result was a bounce-back win for the Patriots after four losses in a three-day span late last week, although Akins said his team displayed a lot of growth during that stretch.

"This time we came out, we played tough, and we beat a more physical team," he said. "We can win a ball game when everything's not falling, not going in our favor."

Batten led the Patriots with 12 points, doubling her total in the fourth quarter. Anahy Pimentel added eight more, including a well-guarded 3-pointer at the end of the third quarter to cut the deficit to 23-22 when it looked like Ridgeview might be ready to pull away.

Neither team was able to stretch its lead all night. A series of early blocks by Kenadi Walton and a tight press helped Ridgeview race out to an 8-2 lead, with all of its points provided by Hayden. But that aggressive defense started to catch up to the Wolf Pack. One of its many fouls helped Anahy Pimentel convert a three-point play off a high bank shot, and that kickstarted a 9-1 run to give Liberty the lead by the end of the quarter.

With Hayden sitting out briefly due to injury, Aubrey Aldan stepped up as just Ridgeview’s second player to convert a field goal, but the Wolf Pack couldn’t stem the tide as the Patriots extended their lead to 17-11 on a pair of Kaylee Batten free throws.

That’s when Hayden struck back with her third and fourth 3-pointers of the night, the second with a defender in her face, to tie the game at 17 apiece entering the half.

Ridgeview carried that momentum into the second half, using a pair of free throws and a putback by Walton, who seemed to be shaking off a slow start offensively.

The most crucial stretch for Liberty came early in the fourth quarter. Ridgeview led 26-24 and had Hayden at the line shooting three. But she missed all three and, off the third shot, Davis fielded a long outlet pass for a quick layup to tie the game. That started an 8-2 run, culminating in a turnaround bank shot by Batten. The Patriots never gave up their lead.

Hayden made one last exceptional play for Ridgeview — down 34-30, she missed from deep but picked the pocket of a would-be rebounder for an easy layup — but she never got a chance to tie the game thanks to two unsuccessful defensive possessions.

Liberty (3-4) hosts Porterville-Monache Thursday, while Ridgeview (4-2) will play at the Shafter tournament this weekend.