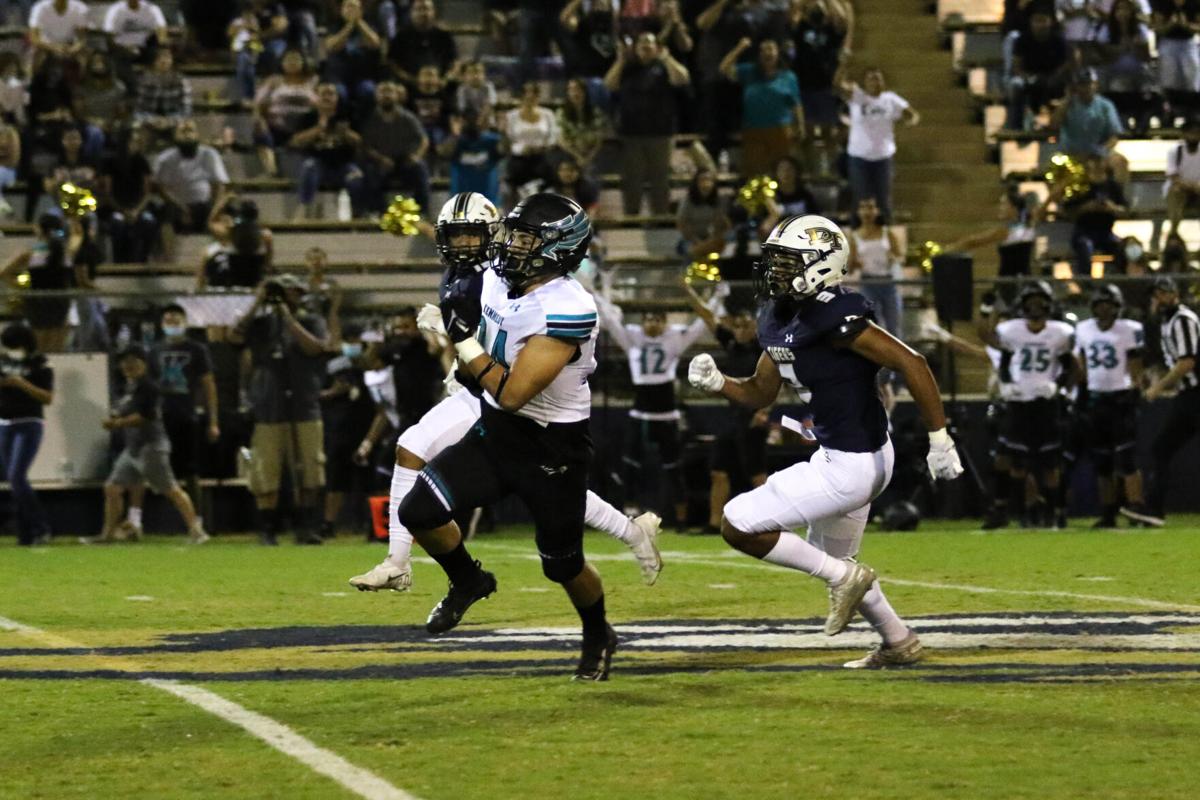 Kennedy senior Avian Pesina heads toward the end zone with a 67-yard touchdown run on the Thunderbirds' first play from scrimmage, Thursday night at Delano. 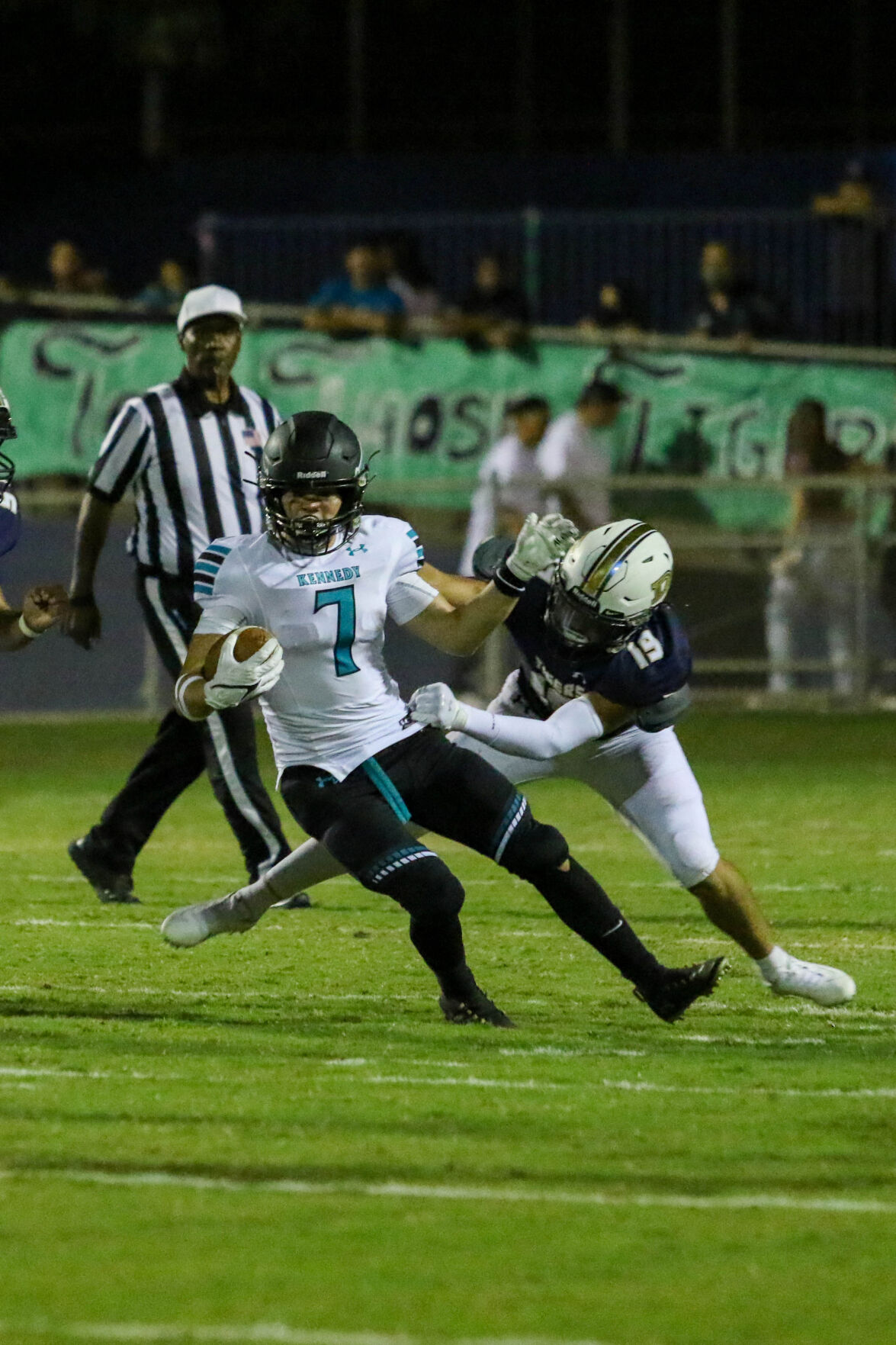 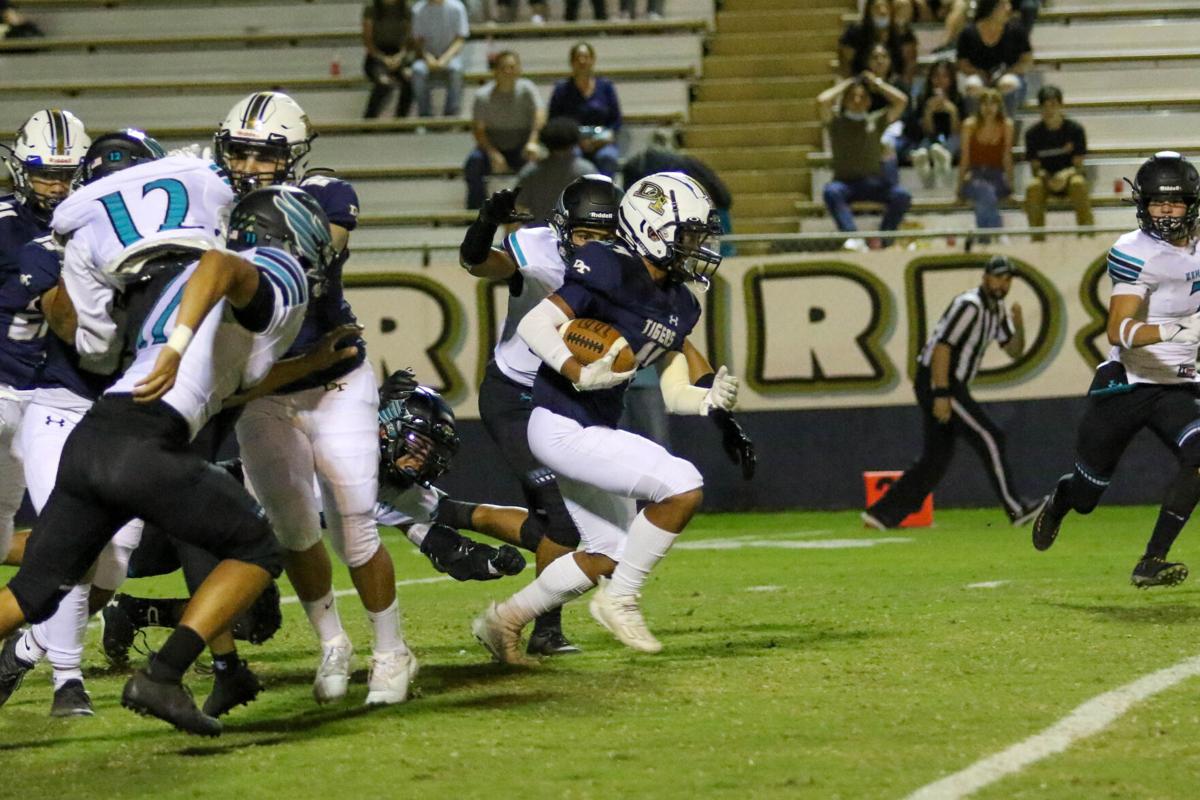 Kennedy senior Avian Pesina heads toward the end zone with a 67-yard touchdown run on the Thunderbirds' first play from scrimmage, Thursday night at Delano.

Prior to Thursday night, it had been 10 years since Delano and crosstown rival Kennedy had met on the football field.

Plenty has changed in that time period. The last time current RFK coach Mario Millan patrolled the sidelines at Gene Beck Stadium it was as the Tigers head football coach, and all his players were in elementary school. The same was true on the other sideline where Delano graduate Frank Gonzales Jr. is in his first year as coach at his alma mater.

Here’s hoping fans won’t have to wait so long for a rematch between the schools located on opposite sides of Highway 99 just two miles apart, because the much-anticipated matchup was intense.

Avian Pesina rushed for 227 yards and four touchdowns, including a 67-yard scoring run on the Thunderbirds’ opening play from scrimmage, to help Kennedy pull away for a 41-14 victory over host Delano in a physical, highly-emotional battle of undefeated teams.

“It’s special for me, it’s special to be in this stadium,” Millan said. “Being on the other side is obviously different, having been there for a long time, but it’s been a long time coming and I knew up until we played Delano, as much success as we’ve had, we never played Delano, so I was looking forward to finally playing, to see where we stand. And we came out on top, so I think we’re in a good place.”

Emotions ran high. At least two players were ejected late in the game and opposing coaching staffs exchanged words in the second quarter while trying to separate players following a tackle near midfield on a kickoff return. Three personal fouls were assessed, and more than a few fingers were pointed.

“It’s hard to keep our kids at bay at times,” Millan said. “They see each other all of the time, but no one could say anything because we hadn’t played each other. So I understand Delano being at home and being undefeated and they have a great team, but our guys were excited about it, and were going to bring it. I knew there was going to be a lot of emotions, but as a coaching staff we just talked to our kids about staying under control, regardless of the scenario.”

When the dust settled, the two teams played tough, hard-nosed football, countering each other’s big plays during a highly-competitive first half before Kennedy wore Delano down in the second half..

The Thunderbirds (4-0), who lost momentum after giving up a late touchdown to the Tigers in the first half, regained control with a dominant run game in the final 24 minutes.

Pesina, who missed stretches of the second half with a leg cramp, put the exclamation point on an impressive night with a 25-yard touchdown run with 8:26 left in the game, capping a big night for the 5-foot-8, 185-pound running back.

“(This game) meant the most, about who really runs it in Delano,” Pesina said. “We came out and put 41 points on the board, so that’s a statement. This was definitely one of my biggest games so far, hopefully there’s more to come.”

After his long scoring run on his opening carry, Pesina scored on runs of 28 and eight yards in the second quarter, the final of which gave his team a 21-7 lead with 2:07 left in the half.

But Delano (3-1), which entered this season with a 16-game losing streak, countered with a touchdown of its own. George Inguito returned the ensuing kick-off to almost midfield, and after the Tigers drive stalled, took advantage of a prevent defense by the Thunderbirds and moved the ball to 5-yard line on a 45-yard run by Andrew Carrasco.

After spiking the ball to stop the clock, Delano quarterback Edward Silva made the most of a broken play and threw a short TD pass to Jayden Gurrola with seven seconds left in the quarter, curing the deficit to 21-14 entering halftime. Carrasco finished with a team-high 78 yards rushing on 11 carries, while Gurrola added four catches for 28 yards.

“Like I just told the kids right now, there’s no wins and losses, there’s wins and lessons,” Gonzales said. “To us this is a lesson. (Kennedy) is a team that’s been around for a while. They’ve been running this offense and defense for a long time. And they run it well, they run it efficiently, and they have good athletes. Sometimes guys are just better than you on a day.”

But Kennedy took the second half kickoff and marched 70 yards on 15 plays, capped by a 1-yard scoring run by quarterback Julian Orozco, taking nearly 7 minutes off the clock.

After forcing Delano to punt, the Thunderbirds drove down the field again, with Hugo Mora scoring on a 3-yard run to build his team’s lead to 34-14 with 21 seconds left in the third quarter. Mora finished with 129 yards rushing on 19 carries, part of a 403-yard rushing night for RFK.

“We have four guys who can run the ball for us, Pesina just happens to be the one on a streak right now,” Millan said. “I think we’re in a really good place. We kind of pride ourselves that if a guy’s a bad night, we have two other guys that will have a good night, and that’s usually what happens for us.”

Trailing 7-0 just two minutes into the game, Delano’s offense seemed to come to life after junior Paul Carrillo stopped Kennedy’s Drake Sand for a 5-yard loss on a third-and-six play.

Following a Thunderbird punt, the Tigers drove 57 yards on 14 plays, and tied the game at 7-7 when fullback Alex Cervantes scored on a 1-yard run on the first play of the second quarter.

“Our guys got a chance to see … before the game it was like a playoff atmosphere,” Gonzales said. “I’ve been in a lot of playoff games with other teams, and it felt like that. There was a lot of emotions going on both sides. But I’m going to come here and establish what I can at Delano. I can’t worry about anyone else.

“We’re not going to be a stepping stone for anybody. Win or lose, we’re going to come out and fight and we’re going to scrap, and that’s the mentality I want our kids to have.”