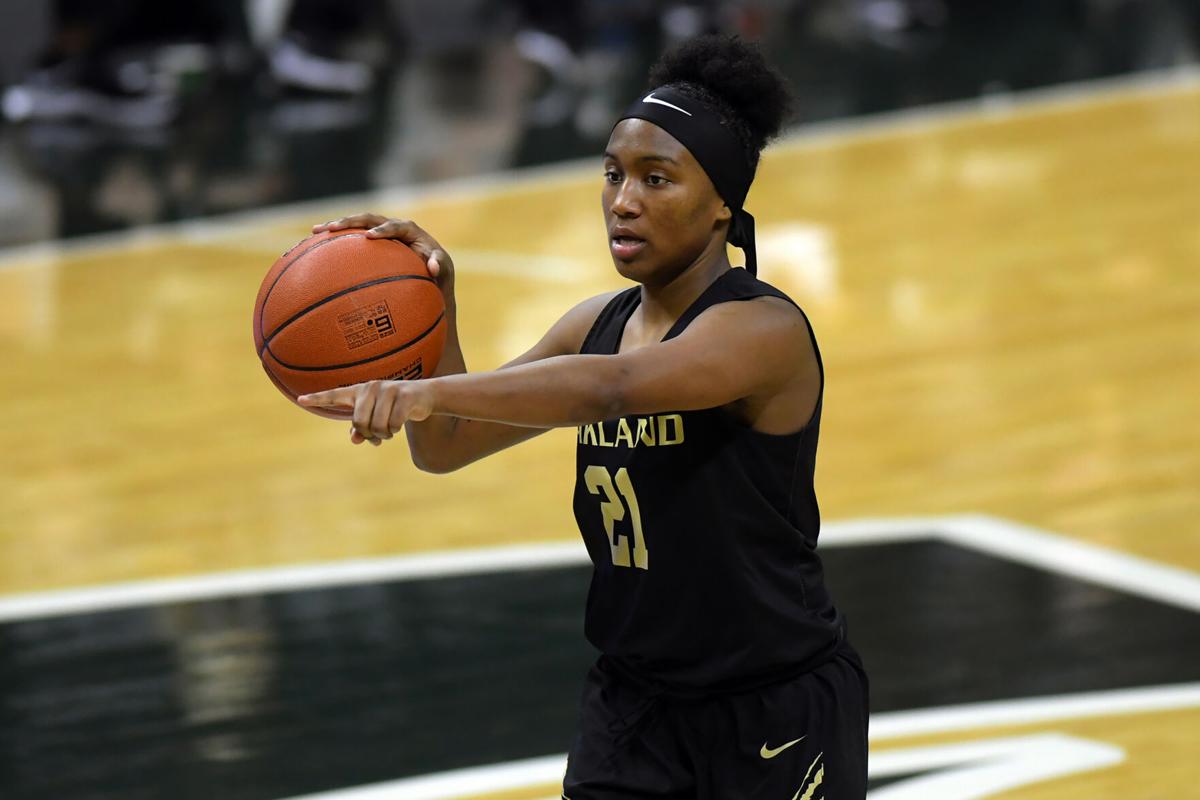 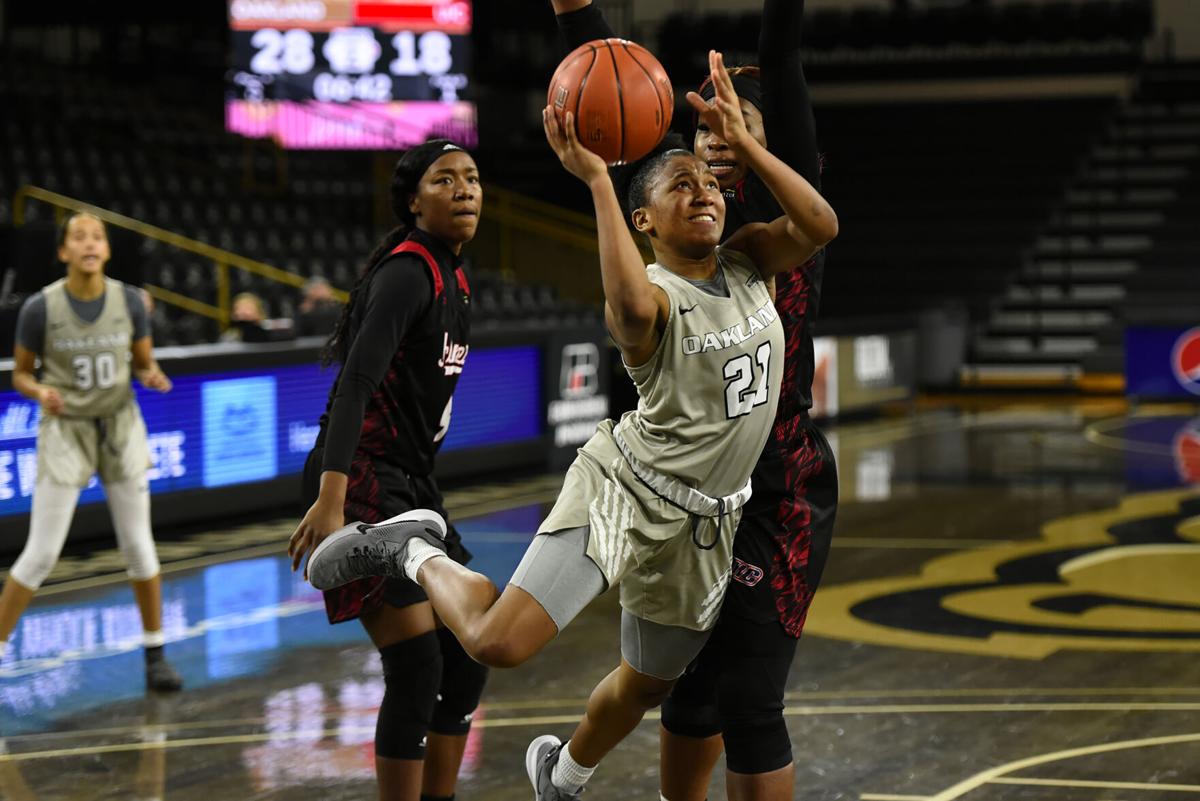 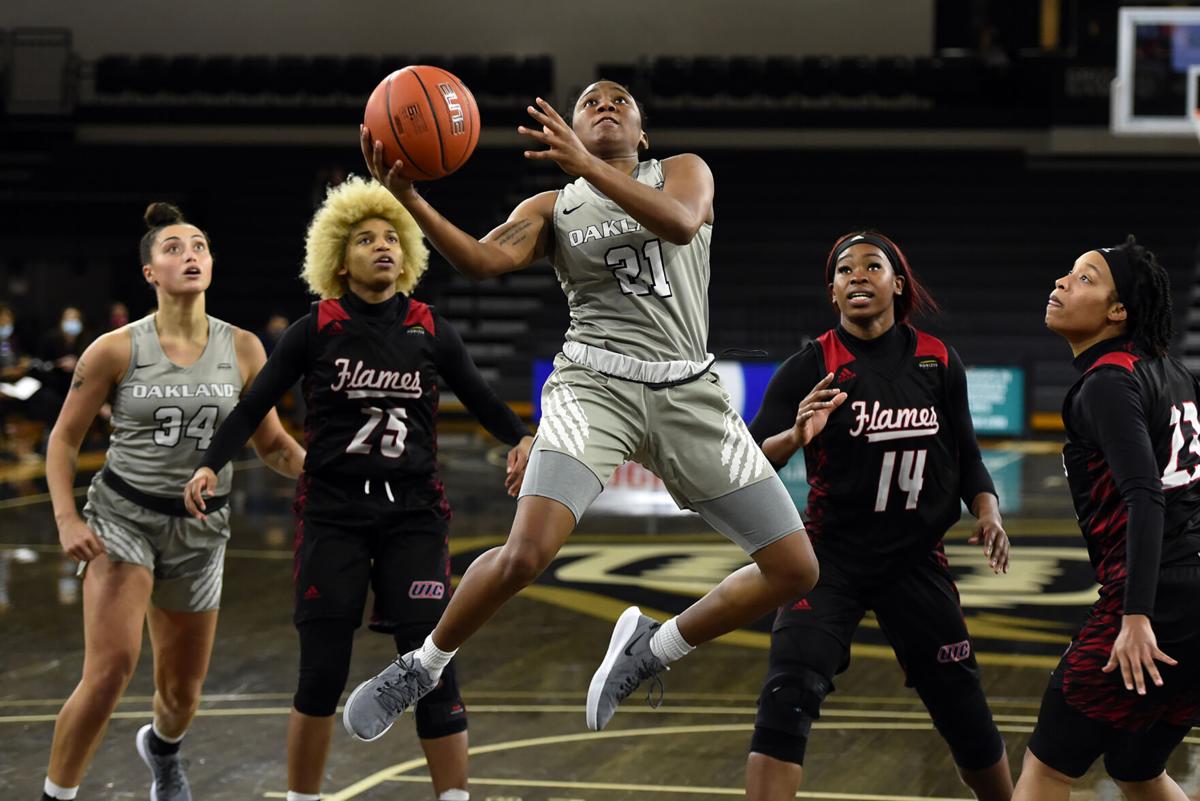 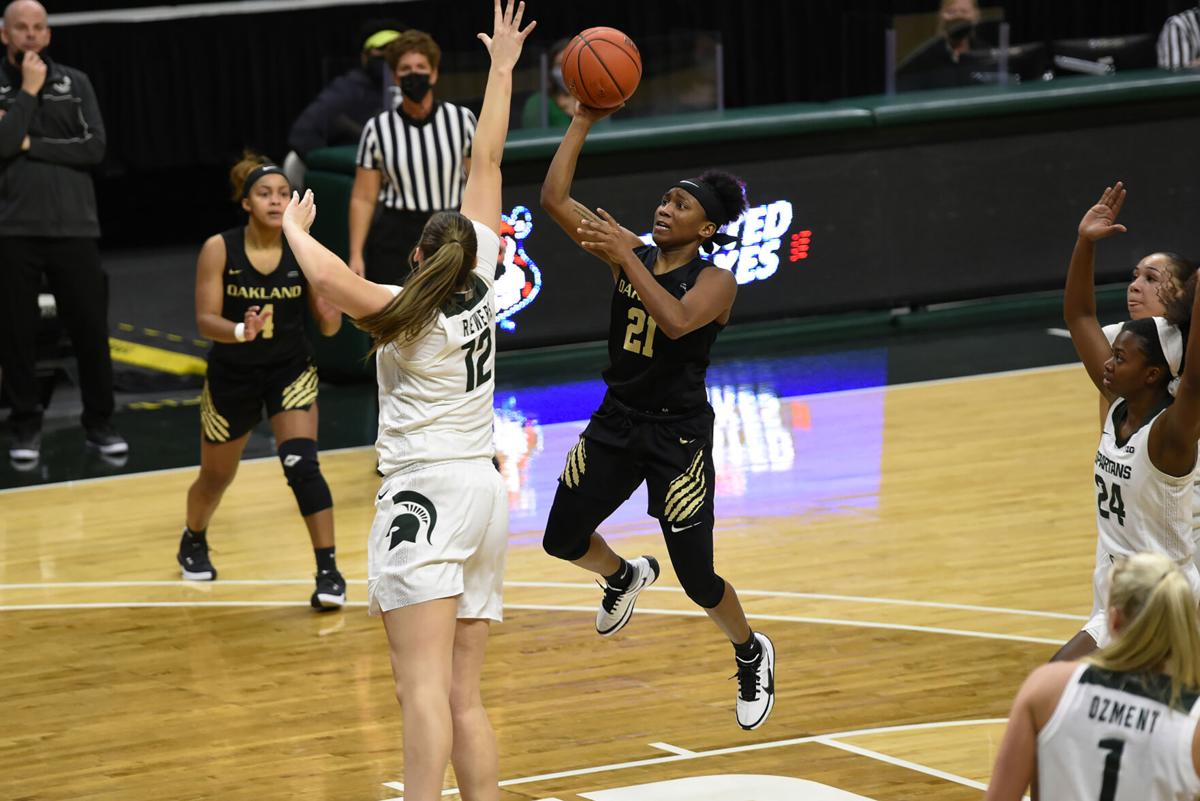 More than 2,300 miles from her Bakersfield home, Kahlaijah Dean is making a name for herself.

That’s nothing new for the 20-year-old Independence High graduate, only this time it’s a stones throw from Detroit, as a junior on the Oakland University women’s basketball team.

The 5-foot-6 point guard leads the Golden Grizzlies in most every category imaginable, averaging 15.3 points, 4.8 rebounds, 3.4 assists and 2 steals a game.

“She’s a leader on the team,” Oakland head coach Jeff Tungate said. “And the thing with her is, she can score it, she can pass it and she can defend. And it’s rare at the mid-major level that you find a player that can do all three. And for us to win, we need her to score, we need her to pass and we need her to defend, so she has a big role on our team.”

Dean’s leadership role has kicked into high gear this season. With the COVID-19 pandemic forcing a delay to the start of the season, Dean has also had to help guide her team through four different quarantine periods as teammates tested positive in the past few months.

“It’s really different just being new to all of us,” said Dean, who was named to the All-Horizon League freshmen team and sixth man of the year the past two seasons. “The first time (we had to quarantine), it was hard because everybody was just tired of it and wanted to do this and that. So I had to take a role in leading by example and making sure we followed protocol and did what needed to be done.”

But then quarantine happened again … and again, and finally just two weeks ago, right before scheduled back-to-back games against Green Bay.

"It’s been rough,” Tungate said. "Before we played Green Bay we had two players in quarantine and we could only practice two players at a time for the entire week leading up to the games. So we had two players and we were in the gym for a long time with two at a time. We weren’t able to come back together until game day.”

Tungate relied on Dean's leadership skills to help get the team through it.

“We know what we want the message to be, and I think she does a good job of delivering the message to the team that we’re lucky to be playing,” Tungate said. “There’s a lot of people in Michigan that own restaurants and bowling alleys and movie theaters that have a lot more challenges than what we have. And so we’re pretty fortunate just to have the opportunity to play, and I think she realizes that and understands that.”

That was especially true in first couple of practices following two-week quarantines.

“When we first got back we’re out there doing sprints and everyone was asking why they were doing that when our bodies are beat after being quarantined for 14 days,” Dean said. “It was just me making sure I make time for us and keeping our energy up and not looking like I don’t want to be here. Because if I do, everyone is going to follow suit.”

Dean accomplished just about everything possible in high school: Four league titles, three straight Central Section championships, all en route to being a two-time BVarsity All-Area player of the year.

But heading into her senior year at Independence, Dean only had a few offers. Rather than just waiting to see, her father, former Bakersfield High basketball player Kahalle Dean, decided to take a more proactive approach.

Dean said her father emailed every NCAA Division I women’s basketball coach in the country, providing each with his daughter's impressive resume and highlights.

In most cases, Tungate says he receives hundreds of such inquiries each season, and he doesn’t have a chance to read all of them. But something about Dean peaked his interest.

“Normally I either pass (the emails and letters) along to an assistant or just glance at them, but there was something about hers, and I said, ‘I want to take a look at this a little bit more,” Tungate said. “So I read the email, looked into the highlights and I really liked what I saw, and I thought this has to be too good to be true. I need to make some phone calls. So I called some of the contacts that we had and followed up with it to see exactly what the story was. We brought her on a visit and that’s how it went. We just got lucky, read the email, followed up on it and here she is.”

When Dean was first contacted by Oakland, she was surprised, to say the least.

“I was grateful for what my dad did, but I was like, 'there’s really a slim chance I’m going to be contacted,'” Dean said. “I never really thought I could end up going D-I or just playing college basketball.”

She was even more surprised when she discovered that Oakland University wasn’t located in the Bay Area. She had never traveled to the midwest before. Her trip to the Rochester, Mich. campus was her first in October of 2017.

"It’s really different here,” Dean said. “It wasn’t snowing, but it was chilly. When I first got here and I came on campus there were reindeer everywhere and I was so confused about what was going on. But I guess that was their normal.

“It’s really a big shout out to my dad. I didn’t have many offers. I had a few, but my dad wanted to see what he could do. I appreciate him for that everyday.”

Tungate is grateful, as well, especially as the team continues to navigate unchartered territory with the COVID-19 pandemic.

“Our story is no different than anywhere else,” Tungate said. “Everybody’s got their challenges. And I told my players, at some point, you’re going to get older and you're going to have kids, and nieces and nephews, and they’re going to ask if we were alive during the pandemic. We don’t want them to say ‘I was and I was watching Netflix and ate Twinkies all day.’ We want them to say ‘I still showed up to work everyday, I still battled, I still competed, and I overcame a lot of obstacles and had a great year.’ And KD’s doing that for us and she’s going to have a great story to tell down the road with this.”

As that story unfolds this season, Dean is more than happy to accept the challenge. It's something she says she's used to.

“My coach has always seen something in me; being a leader role like I’ve always been put in since I first started playing basketball,” Dean said. “He just wants me to be that coach on the court for him. Even now being my third year, he doesn’t say much. He wants us to fix it ourselves. I’m able to talk to him to let him know what I feel needs to change or vice versa. So we have a really close relationship and then on the court they have a lot of trust in me and I have a lot of trust in them. Because we work as a team, we’ve become a lot better than what we have been.”

As the team's point guard, Dean says the team's success is her ultimate goal, and it’s always been that way.

“I’m just big on hard work and dedication,” Dean said. “I’ve always had a mindset that whatever role I have to play to win, whether it’s just me being on the bench cheering them on, or they need me to be on the floor, I’m always just ready for whatever the team needs.”