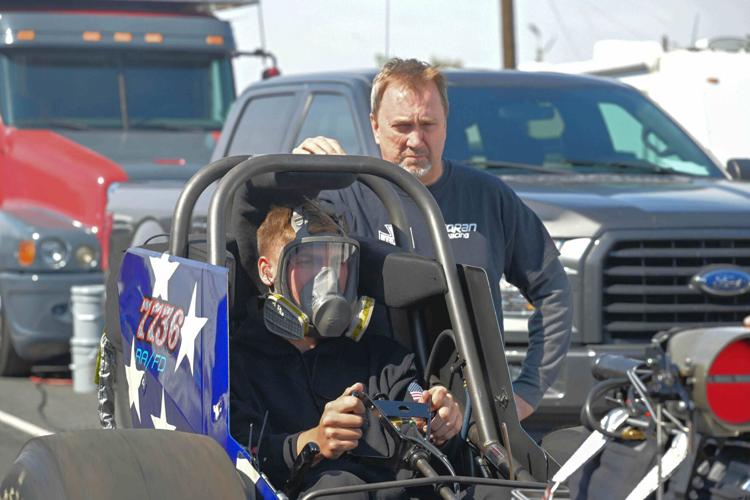 Dan Horan looks over his Top Fuel Dragster with his son Ryan, 19, sitting inside during a test session at Famoso Dragstrip last month. 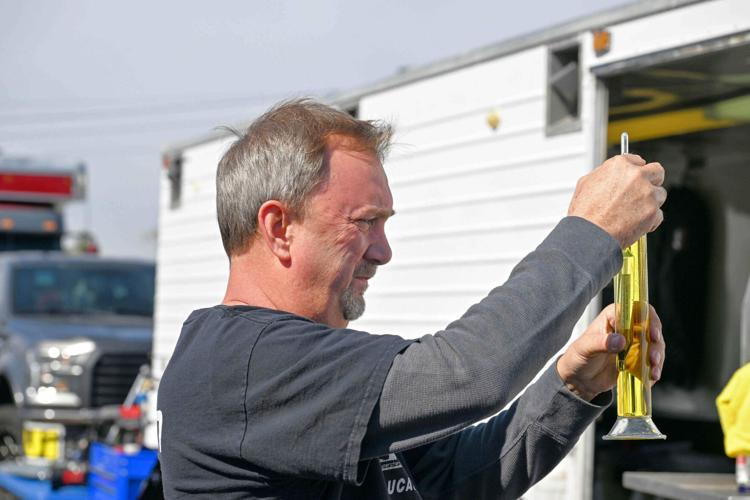 Dan Horan checks the percentage of nitromethane in his fuel during a test session at Famoso Dragstrip last month. 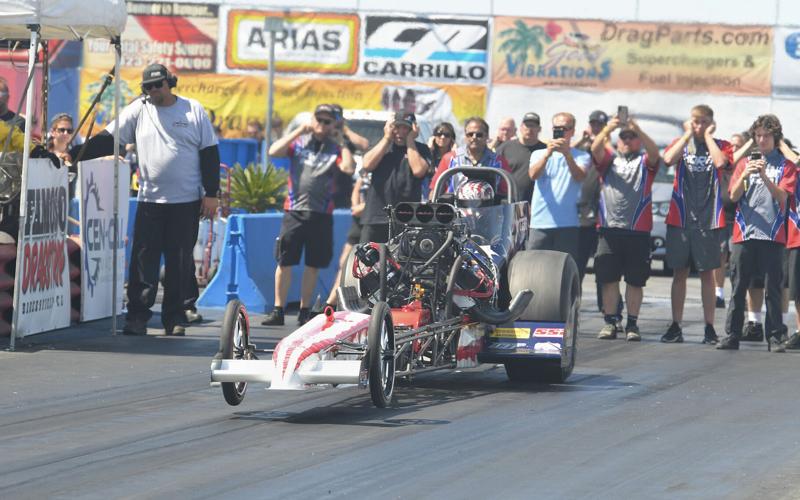 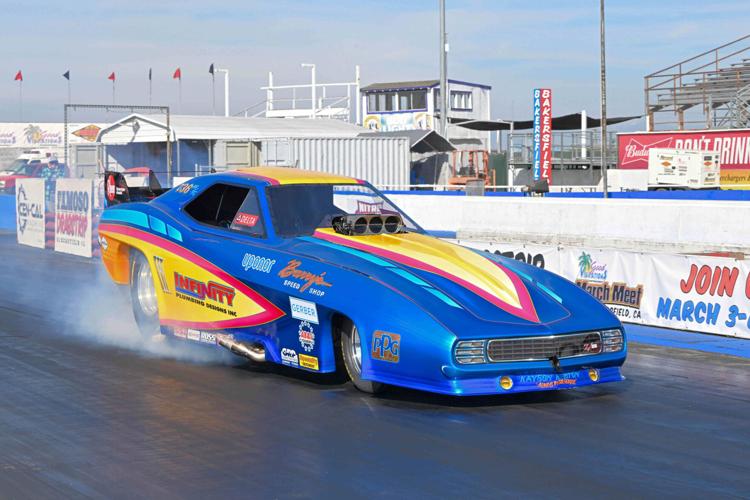 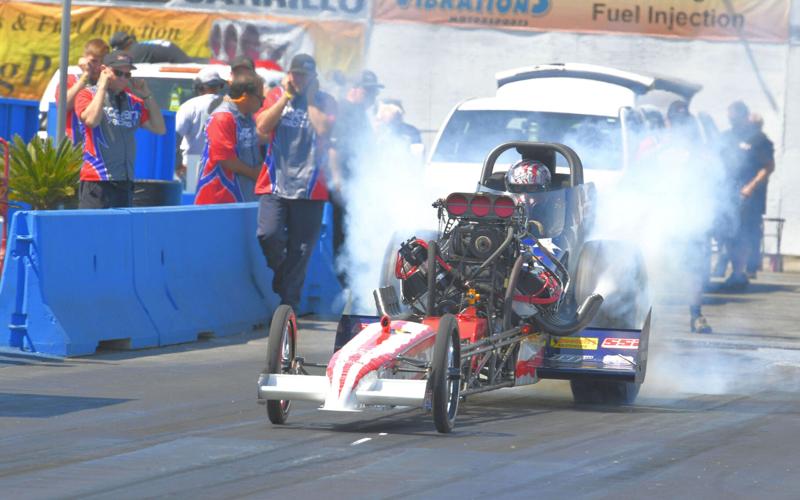 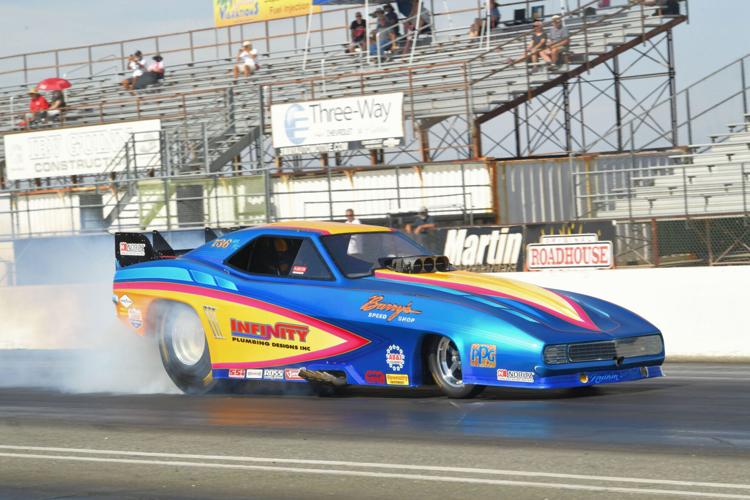 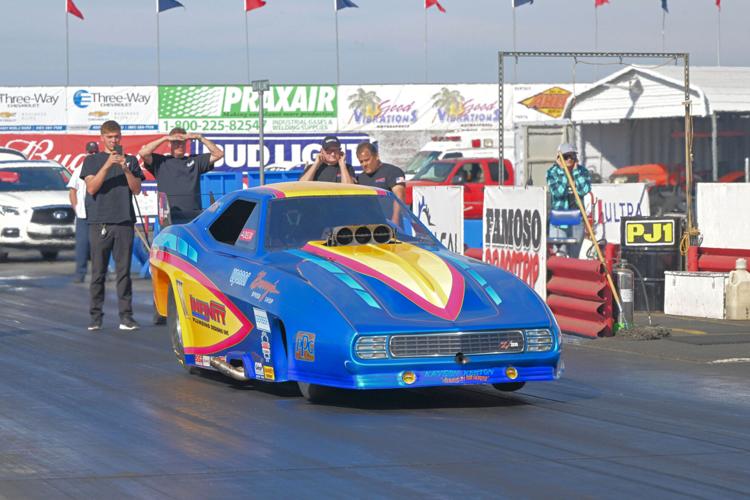 Dan Horan looks over his Top Fuel Dragster with his son Ryan, 19, sitting inside during a test session at Famoso Dragstrip last month.

Dan Horan checks the percentage of nitromethane in his fuel during a test session at Famoso Dragstrip last month.

Driving a front-engined Top Fuel dragster is a bit of family tradition for the Horan family.

The late “Digger” Dan Horan started driving the cars in the early 1970s and was instrumental in kicking off nostalgia drag racing in them during the1990s.

His son Dan drove dragsters before transitioning into the Funny Car ranks where he has been a force for more than a decade.

Horan said he contemplated getting out of racing after his father died in November 2016, but he chose another path — he doubled down and, at the March Meet in 2018, as he drove his Funny Car, as well as his dad’s dragster.

The ironman of nostalgia racing has been pulling double duty pretty much since then — he has a new dragster as he really did not fit into his dad’s — and was the dominant Top Fuel driver last year, winning three of five races and two runner-up finishes en route to the NHRA Hot Rod Heritage Series Championship.

Horan’s son Ryan, 19, is now the third generation of the family to have driven a front-engined Top Fuel dragster as he completed his licensing runs last weekend at Famoso Drag Strip with a stout 5.73 at 248 mph.

“When he licensed, (the car) drifted about one tire width out of the groove toward the right wall and that’s when I stopped breathing,” Dan Horan said. “I was like, 'Come on kid, get it to the finish line.'”

But the youngest Horan won’t be competing at the March Meet this weekend and it appears he may take another racing path.

“He pulled himself out of the event,” said Dan Horan. “We wanted to give him every opportunity to run the car. He’s got a great future ahead of him, but making singles and racing are two different things. Collectively, (crew chief) Pete Kaiser, myself and Ryan all decided this wasn’t the event to make his debut. We want him to be safe. We don’t want to put any pressure on him.”

For his part, the younger Horan said he felt good in completing his license runs last weekend, but felt it best to skip the biggest nostalgia race of the year.

“I feel like with these things you have to really know your stuff and say, 'Hey, I’m not ready for it,'” he said. “Making test passes is one thing. Competing against (Adam) Sorokin and all these other guys is completely different.

Dan Horan said the current plan is to get his son into A/Fuel racing later this year in NHRA events, and then see where things go.

Still, Ryan Horan said getting his license in the same car his dad drives was an emotional moment.

“I got out on the top end after that run and it was really, really cool,” he said. “You kind of share a moment with two other generations.”

So it is back to double duty for Horan and Kaiser, who have become a formidable pair since teaming up three years ago.

Kaiser said the relationship works with Horan as the two are like-minded when it comes to racing — extremely serious.

“When we got together people said we wouldn’t last one race,” Kaiser said. “Dan just lets me do what I want to do. We talk before each run and he says, 'Hey it’s your deal,' and it works great. He’s the best guy I’ve ever worked with hands down.”

It also does not hurt that Kaiser has also driven Nostalgia Top Fuel cars, the last time in 2016.

“I think that helps,” Kaiser said. “I understand what he’s doing in there and he understands what I’m doing out here. It’s a good marriage.”

The two also share the same philosophy when the racing is done.

“When we’re done racing, we have fun and party hard,” Kaiser said.

There was quite the party last October at Famoso after Horan won in Top Fuel. Had it not been for a slow reaction time in his Funny Car semifinal race, Horan and Kaiser may well have been celebrating a double win.

“I was late on the starting line (Drew Austin’s slower 5.639 was good enough to beat Horan’s quicker 5.582 because of that) or we would have been in the Finals in the Funny Car,” he said.

As for this season, Dan Horan said the focus will be on the dragster, and running well with the Funny Car just enhances a weekend.

“I want to go out there and do the best I can as a driver and have a good time doing it,” he said. “This is so much work — if we’re not having any fun, we should do something else.”