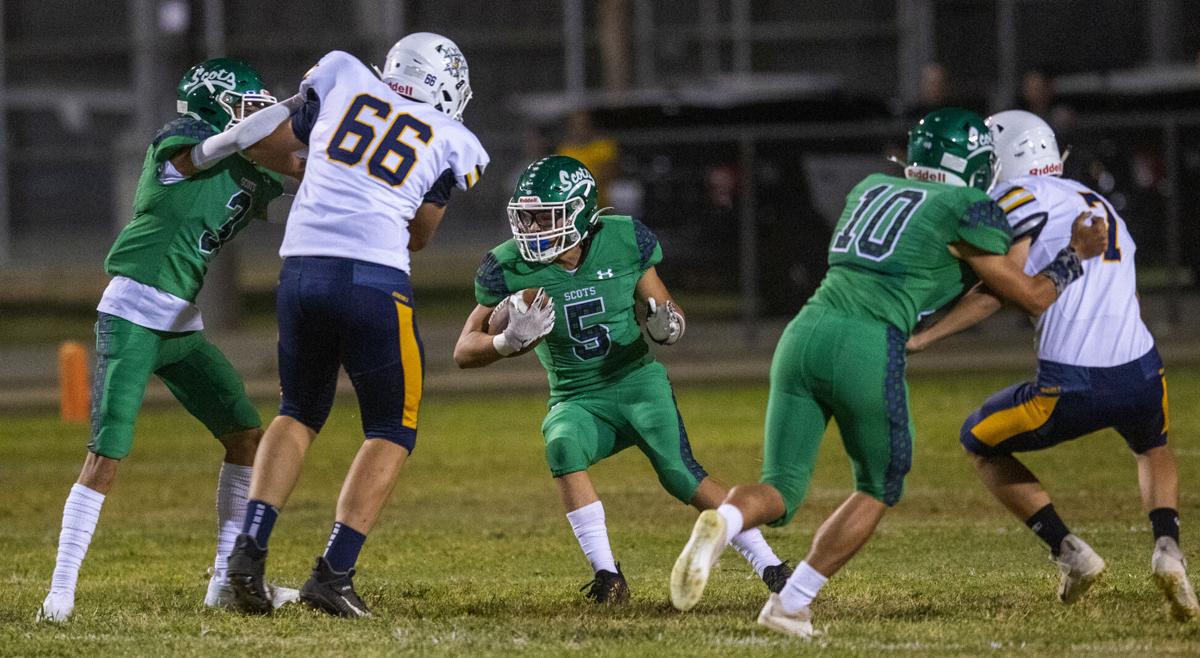 Highland quarterback Jojo Mata looks for an opening against the Shafter defense in Friday night's non-league game at Scotland Yard. 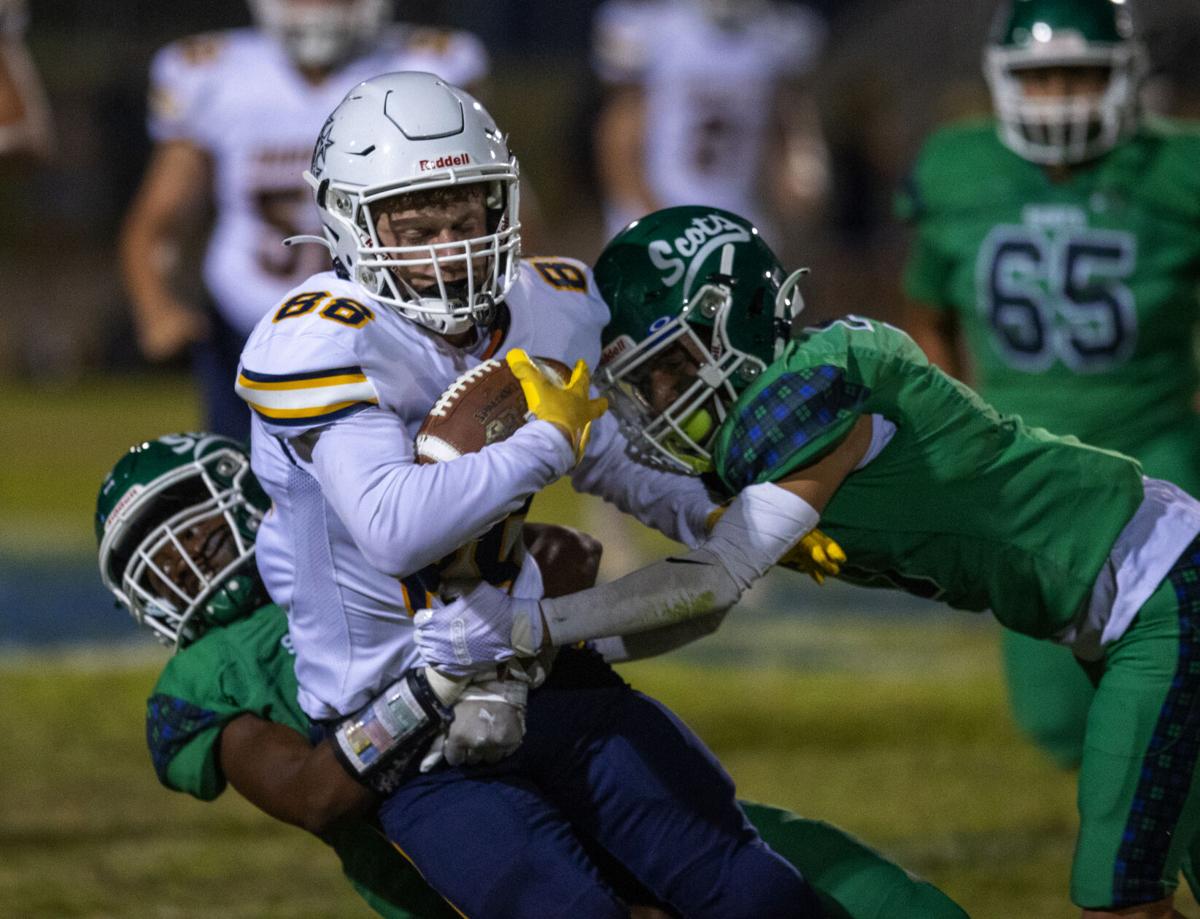 Shafter's Devon Sungren is taken down by two Highland defenders.

Shafter quarterback Tyson Dozhier in the pocket for the throw against Highland on Friday night. 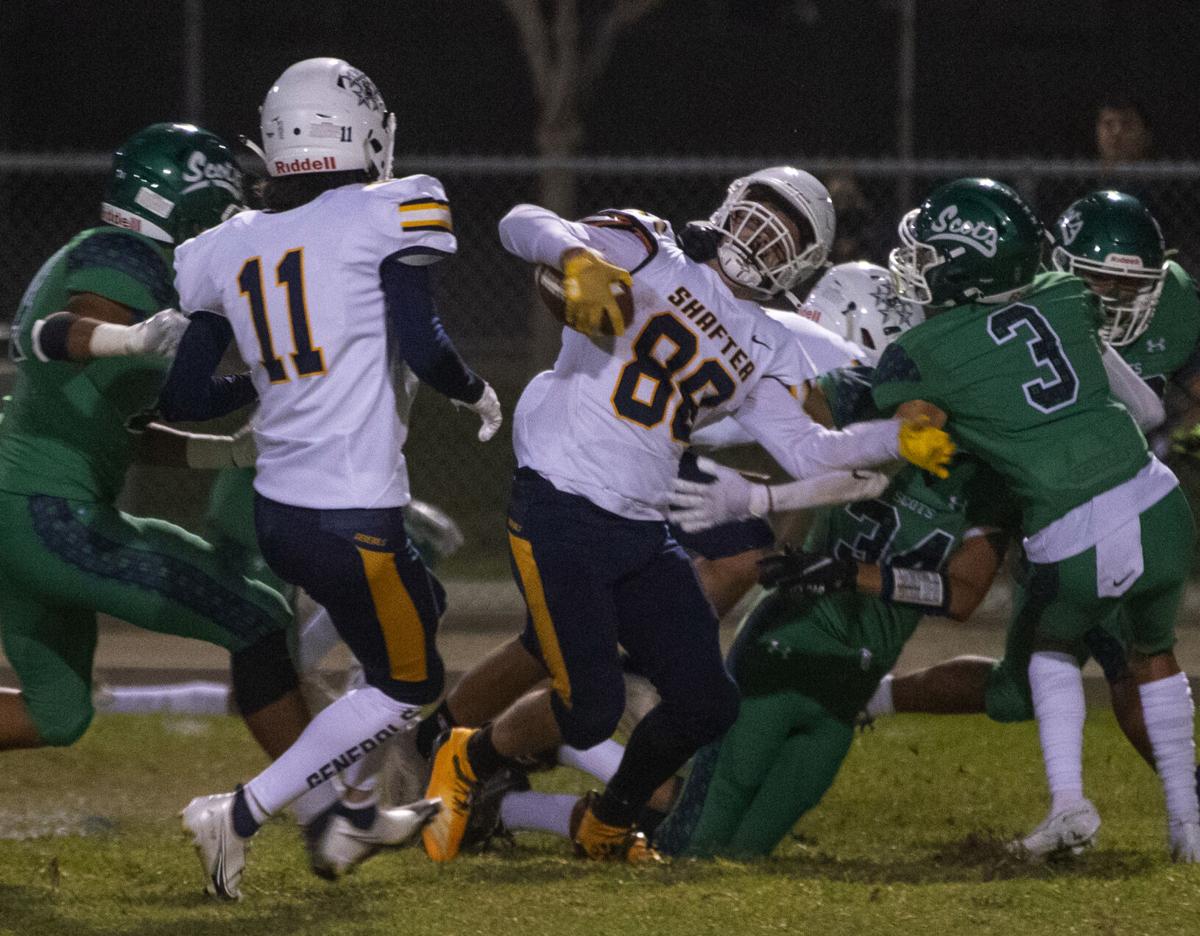 Highland quarterback Jojo Mata looks for an opening against the Shafter defense in Friday night's non-league game at Scotland Yard.

Shafter's Devon Sungren is taken down by two Highland defenders.

Shafter quarterback Tyson Dozhier in the pocket for the throw against Highland on Friday night.

In a battle of attrition Friday night, Highland’s depth proved to be the difference in a physical battle against Shafter at Scotland Yard.

Reserve running back George Venegas rushed for 78 yards in the second half and scored the go-ahead touchdown on an 11-yard run midway through the fourth quarter to help the Scots hold on for a 20-13 victory in a game that finished after 11:15 p.m. following a delayed start due to poor air quality.

“We knew it would be a physical game,” Highland coach Michael Gutierrez said. “Shafter’s always very well prepared. And I’ll give it to them for the adversity they had to deal with and the way they handled it.

“I thought our guys did a great job of keeping their composure and just battling all four quarters and being very physical throughout.”

Venegas, who didn’t have a carry in Highland’s 39-0 victory over Arvin last week, entered the game with four minutes left in the third quarter after the team’s starting tailback Adrian Juarez was shaken up and hobbled off the field in obvious pain.

“We’re fortunate that we have a lot of depth at running back,” Gutierrez said. “Our line did a great job of moving guys around, just answering the call that that’s going to be our strong suit so we have to make sure that we stay on our blocks, guys are hitting holes, and I’m really proud of those guys for stepping up and continuing throughout the game.”

Although Juarez, who rushed for 86 yards and a touchdown to that point, did not return, Highland did not miss a beat.

Trailing 13-12 to start the fourth quarter, Venegas and junior quarterback Jojo Mata carried the load, combining for 75 yards as the Scots pulled ahead for good on Venegas scoring run with 7:03 to play. Venegas followed with a short run for a two-point conversion to push the Scots’ lead to seven points.

“It was crazy,” said Mata, who finished with 90 yards rushing and a touchdown on 21 carries and also completed 7 of 15 passes for 105 yards. “It was a hard-fought game. We stepped up to the challenge and at the end of the day we came out with the win.”

Injuries and adversity, and more importantly, how each team responded to them added intrigue to an already hard-fought game.

Shafter’s star quarterback Tyson Dozhier, the BVarsity All-Area co-player of the year during the spring season, suffered a broken collarbone while playing defensive back. He left the field on his own and immediately headed to the training table. After being evaluated by onsite staff, his right arm was placed in a sling and he was transported off site in an ambulance at halftime.

“I’ll tell you what and nobody’s going to say this, but I will, all these injuries are a direct reflection of the fact we made these kids play three months ago,” said Shafter coach Jerald Pierucci, whose team played without six players last week due to health and safety protocols and lost three more to injuries during a 27-20 loss to West in the opener. “And that’s what this is all about. These kids have not been able to recover from the season before. And when you’re in a small program like this, these types of injuries add up. And I’m out of guys.”

Dozhier’s replacement, the General’s star receiver Devon Sundgren, was pressed into duty in the second half and did an admirable job trying to keep his team in the game.

Playing on a left knee that he said was still ailing from the spring season, Sundgren gave the Generals a shot in the arm with a twisting, spinning run, that saw him break at least two tackles, get pushed backward in the opposite direction and then recover, cut across the field and ultimately outrun the Highland defense for a spectacular 91-yard touchdown run.

“It was a struggle,” said Sundgren, who has never played quarterback before. “But somebody’s gotta step up and play quarterback. I’m just going to do everything I can.”

The play gave Shafter a 13-12 lead with 6:40 left in the third quarter and breathed new life in a team that seemed a bit shell-shocked after Dozhier’s injury.

Sundgren finished with 125 yards rushing on 10 carries. He also completed all three of his passes and had five catches for 53 yards in the first half prior to Dozhier’s injury. He also intercepted a Mata pass to stop Highland’s first meaningful drive late in the first quarter.

Shafter dominated the opening minutes of the game.

After forcing the Scots to punt on their opening drive, the Generals marched 60 yards down the field on their first possession, capped by a 4-yard touchdown run by Elijha Lucero just 2:23 into the game. Dozhier connected with Sundgren with a 27-yard pass play to set up the score. Dozhier was 6 of 10 passing for 67 yards passing and also had a sack before his early exit.

Highland had to punt again on its next possession, and Shafter moved the ball 68 yards to the Highland three-yard line. But Dozhier fumbled the ball at the goal line and the Scots’ Bryan Guinto recovered in the end zone for a touchback.

“It’s frustrating for me because this team is better,” said Pierucci, whose team committed two turnovers inside the five-yard line last week. “I mean we turned the ball over on the one-inch line, again. We should have been up 28-0 in the first half. And we just made mistakes, and it’s because of our youth. There’s some mistakes that you can live with as a coach and others that you can’t. And those are the ones we’re getting right now.”

The turnover had the opposite effect on Highland, which began to move the ball more consistently with a steady dose of Juarez and Mata. The two combined for 46 yards on their first scoring drive, and just three plays after Dozhier exited the game with his injury, Mata beat the defense to the pylon on a 3-yard scoring run. Mata missed the extra point, leaving Shafter ahead 7-6 with 4:10 left in the first half.

“(The turnover) woke us up or something,” Mata said. “We just kept running the ball down their throats and they couldn’t stop us so we kept going. The line gets the gaps for us, and when we see the end zone and see all green we just take off.”

With Dozhier out, the Generals struggled to move the ball, and after punting the ball back to Highland, the Scots drove 65 yards on eight plays, capped by a 14-yard touchdown run by Juarez to make it 12-7. Highland failed on its two-point conversion attempt.

“It seemed like we had no momentum to start the game,” Gutierrez said. “And then all of a sudden we get that turnover and our guys really started building off of it. And we tell the guys if we force turnovers good things will happen. It allowed us to get a lot of momentum. We killed some of our own (momentum) at times with simple mistakes. That’s what we need to clean up as we move forward.”