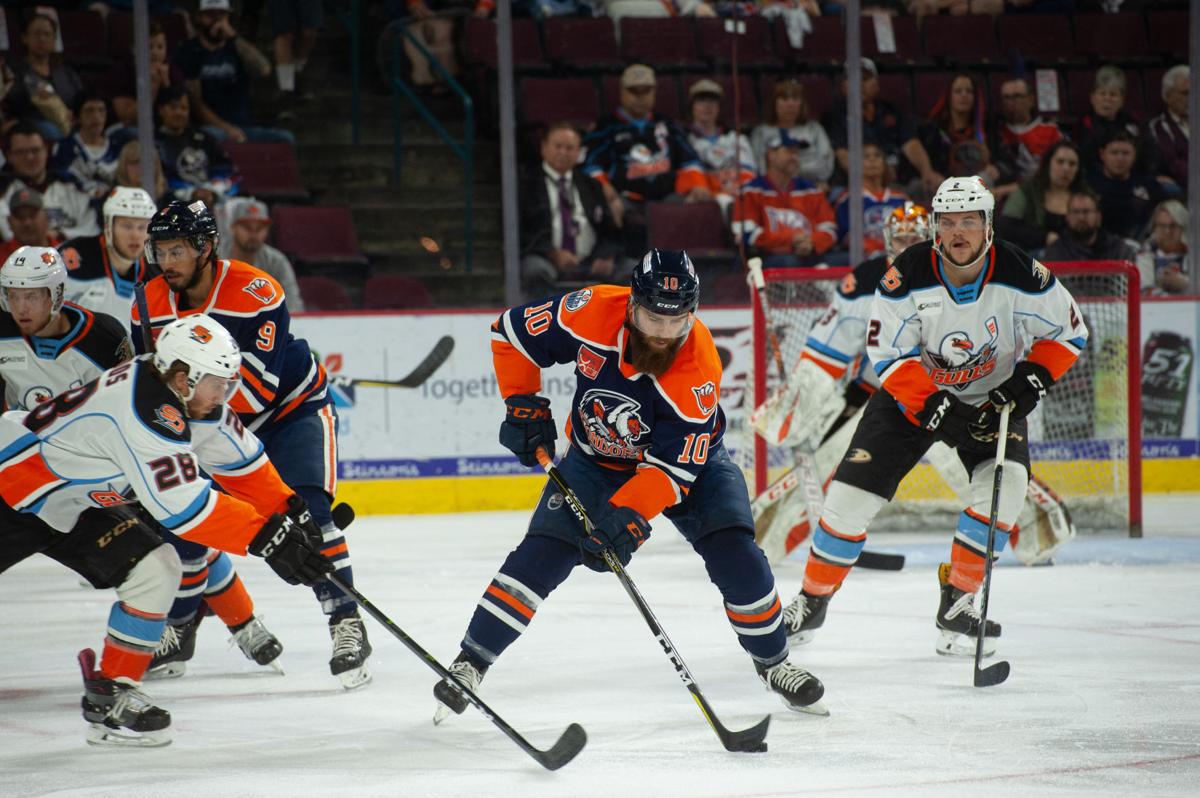 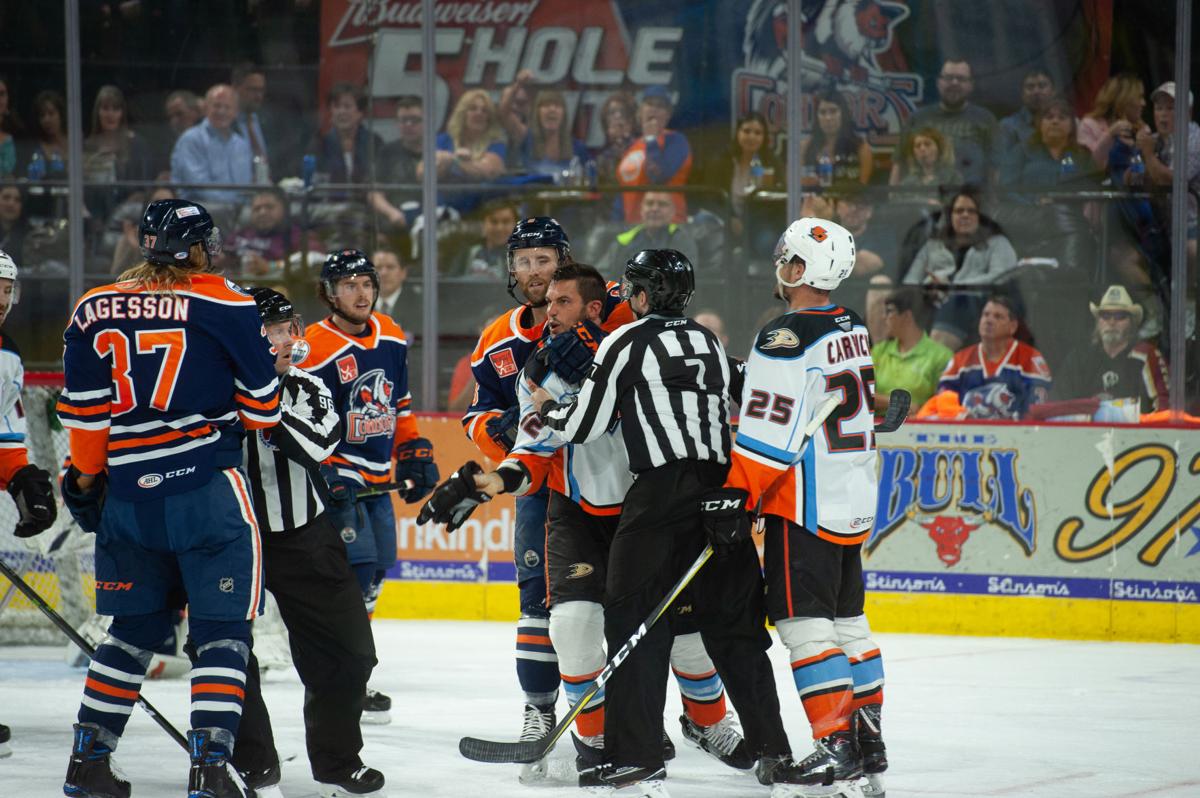 William Lagesson of the Condors and San Diego's Corey Trupp are kept apart by officials during Game 2 of the AHL Pacific Division Finals on Saturday night at Rabobank Arena. 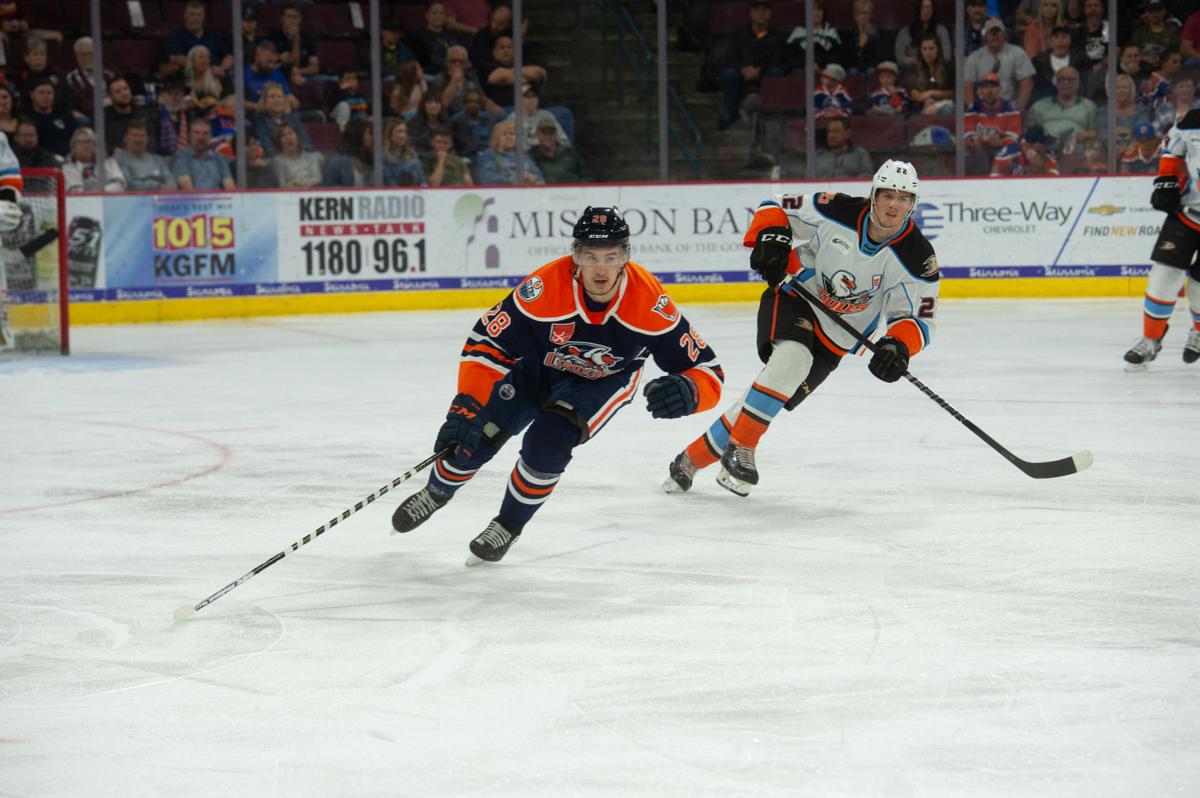 Rookie forward Ryan McLeod made his AHL debut for the Condors on Saturday night at Rabobank Arena in Game 2 of the AHL Pacific Division Finals against the San Diego Gulls.

William Lagesson of the Condors and San Diego's Corey Trupp are kept apart by officials during Game 2 of the AHL Pacific Division Finals on Saturday night at Rabobank Arena.

Rookie forward Ryan McLeod made his AHL debut for the Condors on Saturday night at Rabobank Arena in Game 2 of the AHL Pacific Division Finals against the San Diego Gulls.

It was too little, too late for the Condors on Saturday night at Rabobank Arena.

Down 2-0, the Condors brought a crowd of 7,033 to life when Ethan Bear sent a blast into the back of San Diego’s net five minutes and 44 seconds into the third period

But that was all the offense the Condors could muster as the Gulls skated away with a 4-1 victory a 2-0 lead in the best-of-seven series with Games 3 (Wednesday) and (Friday) back in San Diego.

“I thought we had a good push in the third period, I thought the fellas dug in and made it a game there,” Condors coach Jay Woodcroft said. “When the game was 2-1 we had chances to score, we didn’t convert. There’s a foundation to build on.”

The Condors were pressing to get the tying goal but the Gulls clinched the game when Isac Lundestrom scored off a turnover with 5:15 left to play. Adam Cracknell hit an empty het with 1:41 to play for the final margin.

The big question following Bakersfield’s 3-2 loss to the Gulls in quadruple overtime on Friday night (actually early Saturday morning) was which team would be energized for Game 2.

The answer clearly was the Gulls.

Bakersfield came out strong for the first five minutes but San Diego took total control as the game went on.

The Condors fired five shots on goal in the first five minute, and generated just

By the midway points of the second, Condors coach Jay Woodcroft has tossed his line combinations into a blender looking for a spark.

“I didn’t think we had a ton of juice early in the game,” Woodcroft said. “That said, I thought it was fairly close. At the end of the day, their fourth line scored two goals and that, in my opinion, was the difference in the game.”

The Gulls got their first goal with 1:45 left in the period on a deflection from Kiefer Sherwood

Both teams switch goaltender for the game with Dylan Wells getting the stat for Bakersfield and Kevin Boyle of San Diego. Wells stopped 35 shots.

San Diego’s Max Comtois drove to the net and scored 4 minutes and 20 seconds into the fourth overtime on Friday night as the Gulls beat the Condors 3-2 in the fifth-longest game in AHL history.

Both goaltenders, Shane Starrett for the Condors and Jeff Glass for the Gulls, were stellar. Starrett stopped 53 shots, Glass 51.

“There were numerous chances at both sides of the rink, either team could have won,” Woodcroft said. “There was some great goaltending on both sides. It was a heck of a hockey game.”

The game ended at 12:20 a.m, five hours and 10 minutes after it started with a crowd of 6,524 on hand. About a third of those were still there at the finish. Total game time was 124:20, the equivalent of just over two hockey games.

Condors should have won game one. The missed hooking call that gave the Gulls their first goal was as bad a no-call as the missed pass interference call that kept the Saints out of the Super Bowl. How four guys miss that call is amazing and the AHL should see to it that crew never works again.