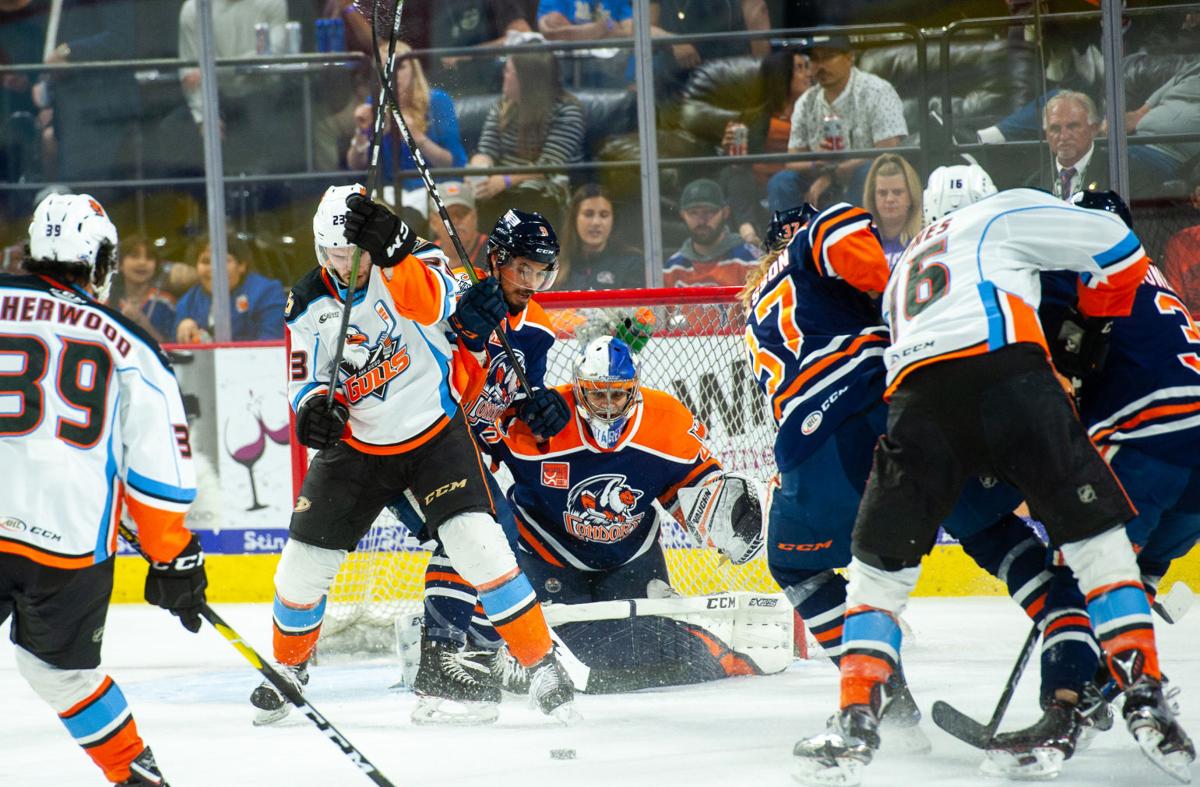 Condors goaltender Shane Starrett makes a save against the San Diego Gulls during first period action on Friday night at Rabobank Arena in Game 1 of the AHL Pacific Division Finals. 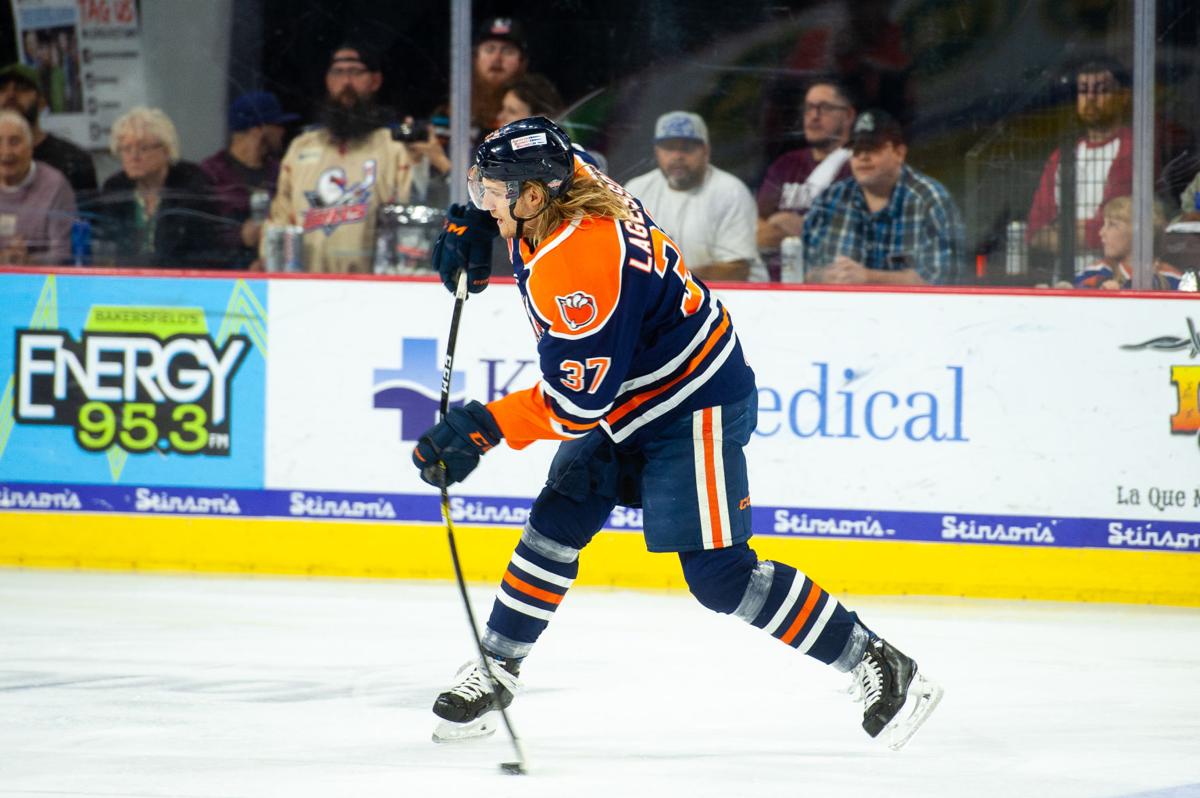 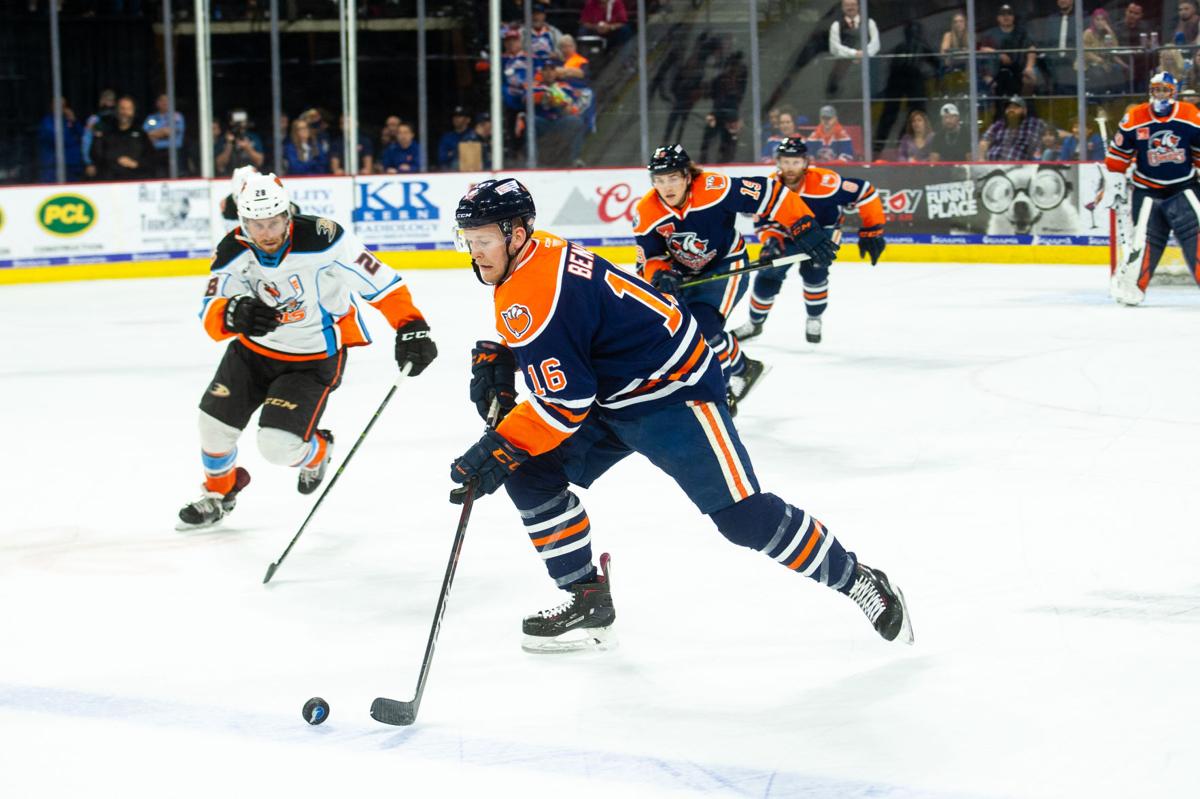 Bakersfield's Tyler Benson carries the puck up the ice during first period action against San Diego on Friday night in Game 1 of the AHL Pacific Division Finals at Rabobank Arena. 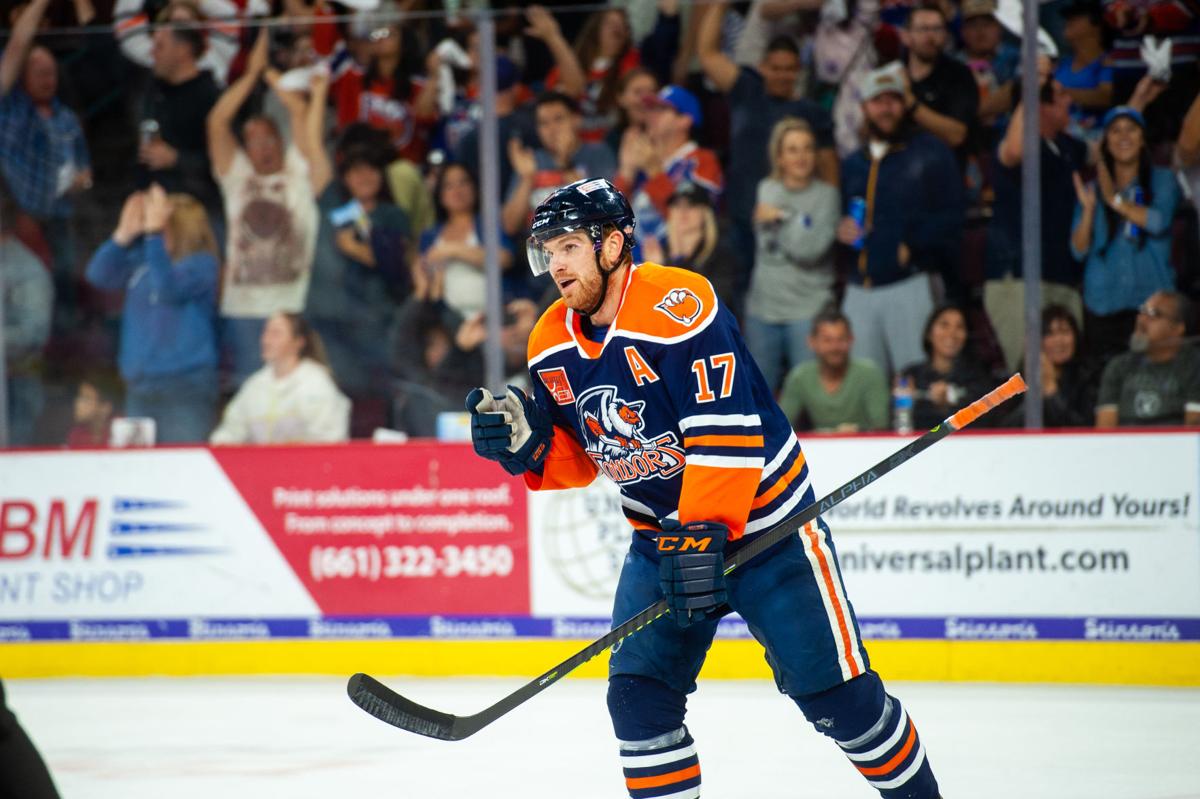 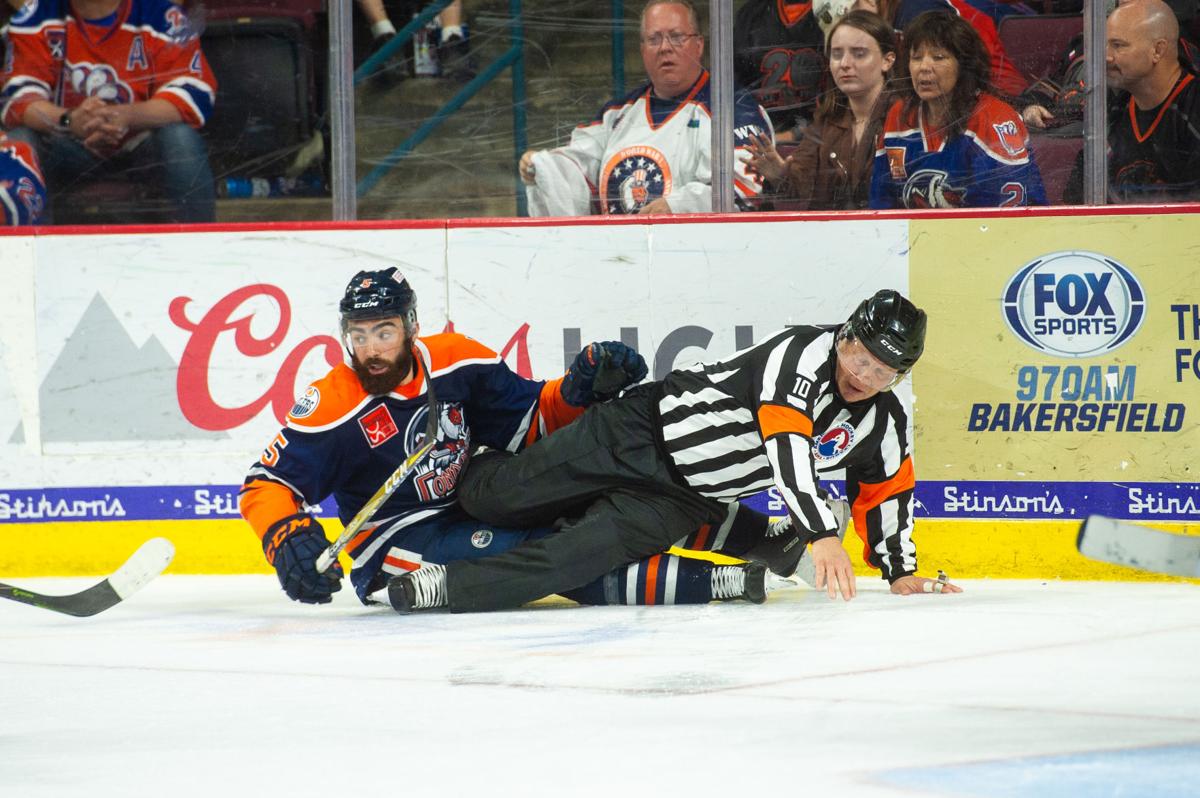 Bakersfield's Joe Gambardella and referee Terry Koharski got tangled up during Game 1 of the Pacific Division Finals on Friday night at Rabobank Arena. 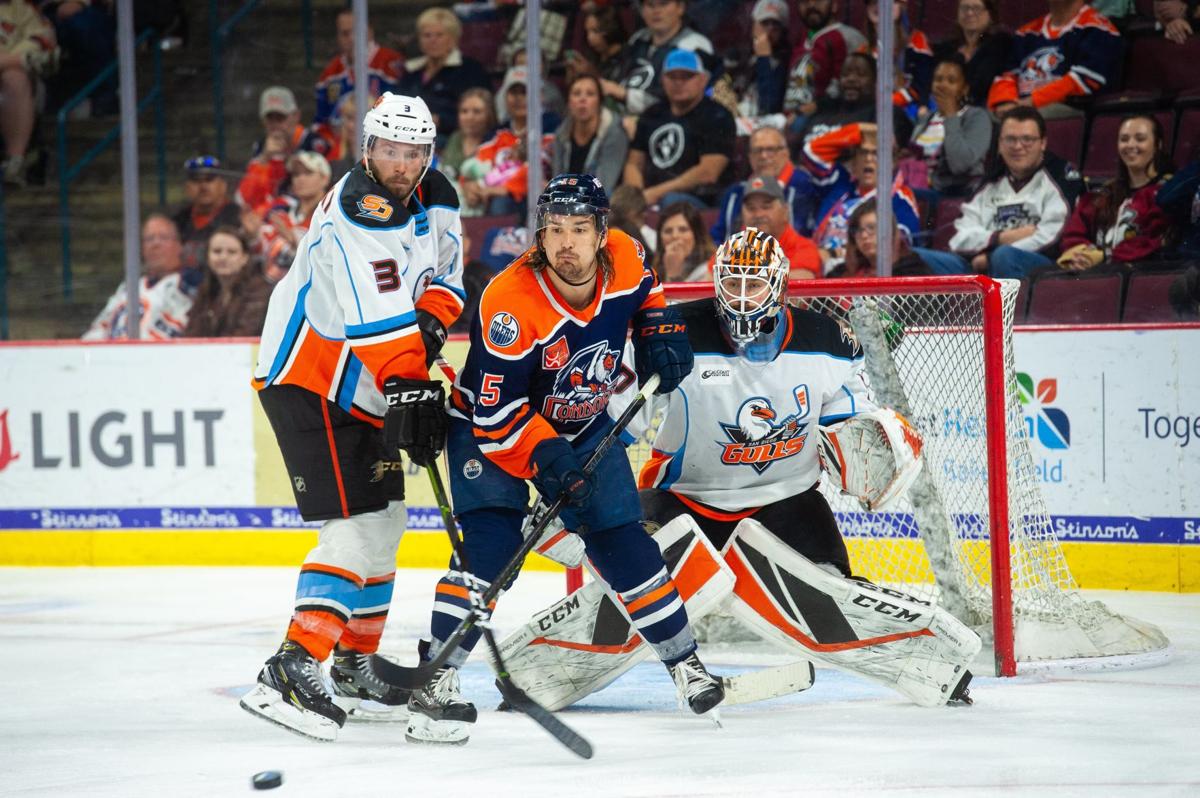 Condors goaltender Shane Starrett makes a save against the San Diego Gulls during first period action on Friday night at Rabobank Arena in Game 1 of the AHL Pacific Division Finals.

Bakersfield's Tyler Benson carries the puck up the ice during first period action against San Diego on Friday night in Game 1 of the AHL Pacific Division Finals at Rabobank Arena.

Bakersfield's Joe Gambardella and referee Terry Koharski got tangled up during Game 1 of the Pacific Division Finals on Friday night at Rabobank Arena.

The opening game of the American Hockey League Pacific Division Finals on Friday night at Rabobank Arena turned into a marathon.

Or rather, an ultramarathon.

It ended at 12:21 a.m. Saturday morning when San Diego’s Max Comtois drove to the net and scored 4 minutes and 20 seconds into the fourth overtime for a 3-2 victory over the Condors.

It took five hours and 11 minutes of real time and 124:20 of ice time, the equivalent of just over two hockey games. It was the fifth-longest game in American Hockey League history.

“I thought it was a really well played hockey game by both teams,” Condors coach Jay Woodcroft said. “It was a shame we didn’t find a way to get the win … What an effort by our group of warriors out there. That’s not easy playing that amount.”

Both goaltenders, Shane Starrett for the Condors and Jeff Glass for the Gulls, were stellar. Starrett stopped 53 shots, Glass 51.

“There were numerous chances at both sides of the rink, either team could have won,” Woodcroft said. “There was some great goaltending on both sides. It was a heck of a hockey game.”

The Condors had the best chances in the second and third overtime periods.

Glass stopped a quality chance by Joe Gambardella with 9:30 left in the second OT, stopped Josh Currie a minute later and made his biggest save of the game with 1:45 left as he stopped Gambardella’s hard shot from the low slot.

It was more of the same in the third overtime for the Condors. Mitch Callahan just missed scoring off a rebound opportunity at 5:30, Glass stopped a shot by Josh Currie with his right pad at 7:30 and Evan Polei got stopped on a partial break at 9:45.

Starrett stopped Kevin Roy on a break with 3:22 left in the third overtime and less than a minute later it was Glass keeping Gambardella from ending the game.

The Condors took a 2-1 lead 4:22 into the third when Joe Gambardella stuffed in the puck from the left edge, which Gulls goaltender Jeff Glass thought he had covered.

Before the goal announcement had been made, the Gulls tied the game.

Bear had the puck just to the left of his net and started skating up the ice when was hooked down from behind. The puck came loose as Bear fell face first to the ice. No penalty was called as the puck went right to Ben Street, who quickly fed Sam Carrick at the left edge of the net for a goal at 4:33.

The Condors led 1-0 heading into the third but the Gulls tied the game 32 seconds into the period when Justin Kloos, sitting in the slot, intercepted an attempted clearing pass by William Lagesson and beat Starrett.

It had been a pretty uneventful and not overly emotional game until 9:21 into the second when David Gust leveled Isac Lundestrom with a huge open-ice hit just inside the San Diego blueline.

That set off a bit of a melee but only one penalty was called: Gust for interference, which sent the Gulls on a power play.

But as they did four times during the regular season and once again in the opening-round of the playoffs, Patrick Russell and Brad Malone connected for a Condors short-handed goal.

Russell got possession of the puck and drove down the right side as Malone skated down the middle of the ice. Russell feed Malone who beat Glass at 12:09 for a 1-0 lead.

Starrett made two big saves in the period. The first on a breakaway by Deven Sideroff just two minutes in. The last came at the buzzer as he made a pad save on a point-blank shot on a San Diego power play.

Both goaltenders made a couple of big saves in the first.

Starrett made a huge save with 6:26 left when he got a piece of the puck on a shot by Street, who broke in all alone and fired from the slot.

And now both teams get to start all over less than 19 hours after they finished.

Beer sales stopped, as usual, after the second period intermission. Concession stands were closed before the end of overtime.

Center Ryan McLeod, who joined the team on Thursday after finishing up junior play, did not play as Condors coach Jay Woodcroft went with 11 forwards and seven defensemen, the same configuration he used for the last two games of the series against Colorado. McLeod was the 40th overall pick in the 2018 NHL Entry Draft.

Edmonton Oilers interim General Manager Keith Gretzky and Vice President of Hockey Operation Craig MacTavish are in town for the first two games of the series. Gretzky was also on had last week when the Condors wound up the opening series against Colorado.