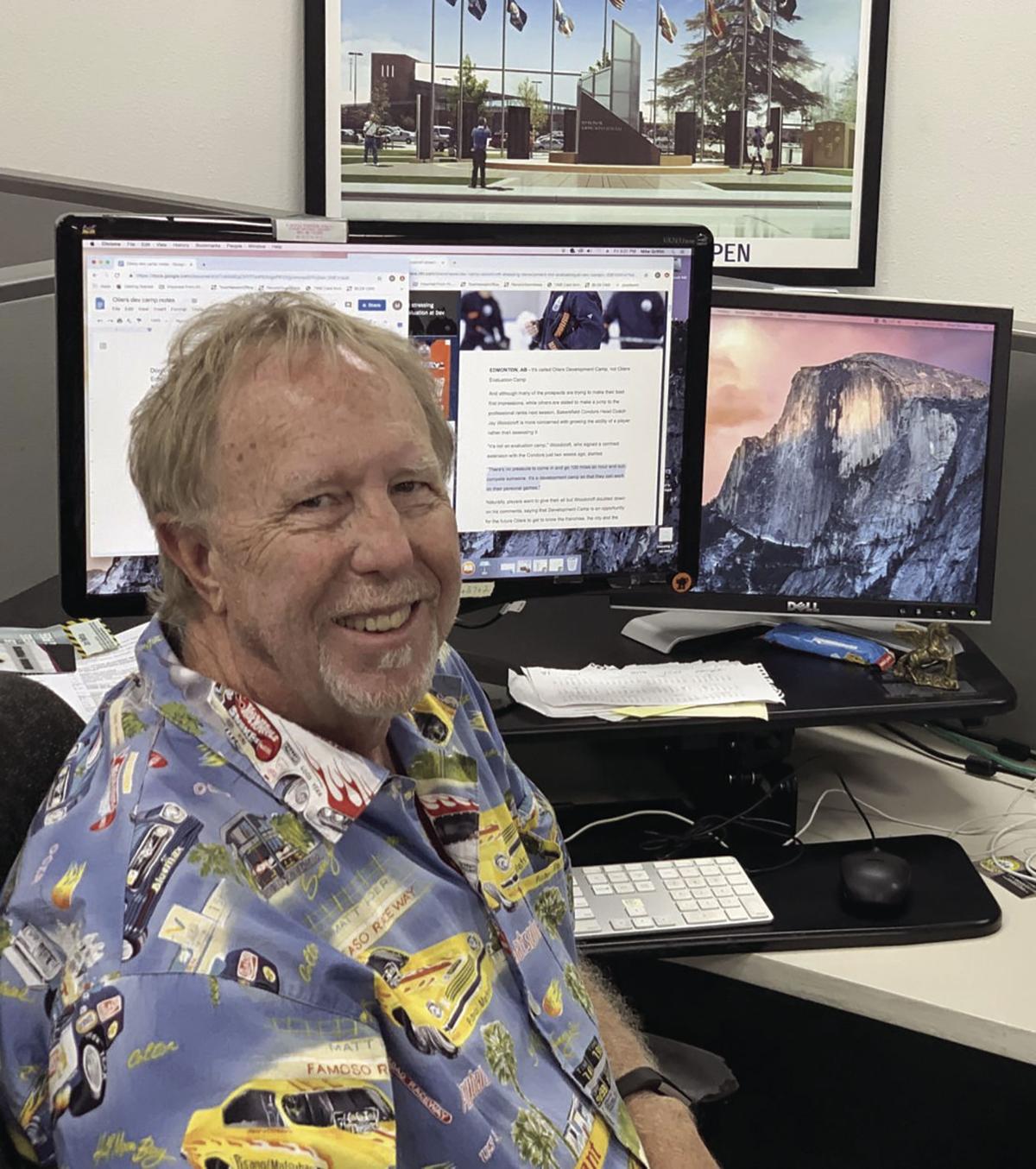 After 40-plus years of covering sports for The Bakersfield Californian, Friday was his last day in the office as he is headed into retirement. 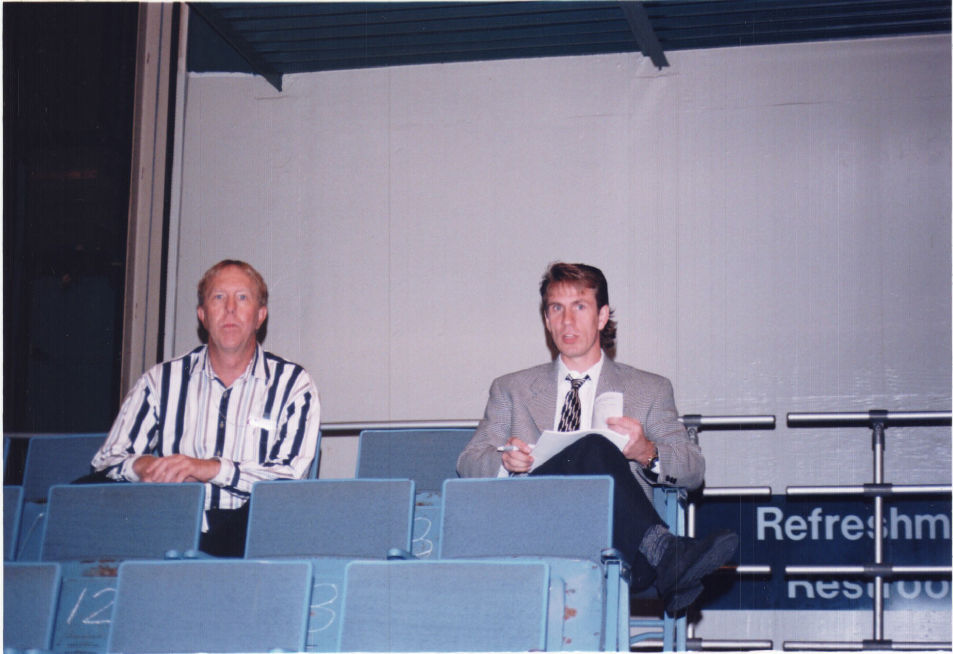 Mike Griffith, left, and Keith Gretzky look like deer in the headlights prior to a Bakersfield Fog game in the 1990s.

After 40-plus years of covering sports for The Bakersfield Californian, Friday was his last day in the office as he is headed into retirement.

Mike Griffith, left, and Keith Gretzky look like deer in the headlights prior to a Bakersfield Fog game in the 1990s.

After covering a variety of sports over the past five decades, I am putting away the chisel and stone and calling it a career.

At least on a full-time basis.

I spent Saturday night covering the Spears Southwest Tour race at Kern County Raceway. That was my final shift as an employee of The Bakersfield Californian.

And the folks at KCRP were nice enough to send me off with a spectacular aerial fireworks show.

It was a career I never envisioned.

My father, Eddie, started working at The Californian in the early 1950s and by the time I was in junior high I pretty much knew how newspapers operated: from initial news gathering all the way through to a button being pushed to start the giant presses rolling.

It was fascinating but not for me.

Or so I thought.

In early February of 1977 I wrote a short feature story on the Bakersfield Top Fuel drag racing team of James Warren and Roger Coburn. They had won two straight March Meet races and were going for three in a row.

It got published and in October of 1977 I started working full time in sports at the age of 23.

Basically, because I had it damn good here.

I got to cover events and tell so many stories on a wide variety of topics. Prep sports. Bowling columns. Saturday night fights and world championship boxing matches. Go-kart races and major races such as Indianapolis 500s and Daytona 500s. Even one NFL game (Walton Payton’s last in the regular season).

No matter the subject, it’s not so much the sport or the event, but the people who make the story. I was just the conduit for bringing the story to readers.

I loved the outdoors (former Californian columnist, the late Jim Day, gave me my first skinning knife and shotgun (a single shot .410) before I was a teenager. Years later I had the pleasure of filling an outdoors page with features and other articles.

While on the outdoor beat, a game warden introduced me to a fellow by the name of Steve Merlo who wrote an outdoors column for the Shafter Press. He said Merlo was quite an expert and would be a valuable source for me.

We met and became lifelong friends and I spent many an hour with him hunting and fishing.

Merlo called me up late one summer afternoon in the 1980s and told me a lake at Buena Vista had been closed because of a report of an alligator. He got permission from the parks department to search for the critter at night from his boat and off we went.

Alas, we could not find an alligator but we did come back with a mess of frogs, which later became quite the frog leg feast. And yes, I did write a story about the great alligator hunt.

I had to give up the outdoor beat when I started covering hockey in 1995 and a few years later we hired Merlo to write columns for us, which he did until his death in 2016.

Writing his obit was difficult, but an honor.

As for hockey, I took over the beat a month into the inaugural season of the Bakersfield Fog (1995-96) where Keith Gretzky, famous for being Wayne’s younger brother, was in his first gig as a pro coach.

It was the hope of city leaders that the sport would flourish, and it did. The Fog turned into the Condors and for the past four seasons have been the American Hockey League affiliate for the Edmonton Oilers.

No way that could have been predicted in 1995.

The stories in print have been many, but some of the best memories came from off-ice antics.

Perhaps my fondest memory is a trip with the Fog, which took us to San Diego, four nights in Fairbanks, Alaska, and three nights in Anchorage.

It was baptism by fire for the scribe, who had to be on constant alert as Gretzky (he claims innocence to this day) was the ringleader for his merry band of players turned pranksters.

They were at their best in Fairbanks where Wade Welte (allegedly 5-feet, 8-inches tall) was adept at crawling under a table and adorning one of my shoes with food. Then there was the lights that did not work in the hotel room and a toilet seat wrapped in cellophane (I was wise to that).

Then the window curtain (hiding a bright Ford sign from a car dealership) went missing and eventually I walked into a room with two bare bedframes and a single pillow placed on each of them. If I remember correctly, the missing beds, sheets and blankets were found in a room occupied by Lindsay Vallis and Kevin Barrett.

So many games. So many memories from on and off the ice, best told over a cold one at a pub.

And I knew of Kevin Harvick before he became famous and a NASCAR Cup champion. He started his career racing a Late Model as a high school student at North High.

Having spent nearly a month at Indy for more than a decade, there are enough memories to write a book. I’ll give a couple:

The 1982 500 where three Bakersfield drivers started: Mears, George Snider and Roger Mears, Rick’s brother. Kevin Cogan, starting on the inside of the front row, triggered a crash as the cars came to the green flag. A number of drivers were caught up in the incident, including Roger Mears, who was making his first 500 start.

There was a lengthy red flag to clean up the debris and I’ll never forget how emotional Roger was when I spoke with him in the garage: angry one moment and crying the next as he was out of the race before it even started.

It was also the closet 500 loss for his brother, Rick, who was 10 seconds behind Gordon Johncok with 10 laps to go and wound up losing by 0.160 of a second.

I flew to Indy on May 8, leaving behind my very pregnant wife, who was not due for three more weeks.

During practice on May 10, Rick Mears hit the wall in the morning and shortly after that I got a phone call saying my wife was on the way to the hospital. A few hours later, my youngest daughter, Allison, was born.

The following day Mears went on to win the pole position and on May 26 he won his final 500.

I flew home on May 28, walked across the tarmac at Meadows Field, though a gate and held my 18-day-old daughter for the first time.

A few years ago we needed some help with covering later-season races so I volunteered my daughter, who had just completed studies at the University of Idaho. She got a quick tutorial of how to cover multiple short track races on a tight deadline and the next week she was on her own.

She covered a handful of races including the Bud Nationals at Bakersfield Speedway and a Spears Southwest Tour race at Kern County Raceway.

In doing so she became the third generation of Griffiths to have a byline in the The Bakersfield Californian.

I think that record will stand for a long time.

Veteran sports writer Mike Griffith, who retired on June 30 after 42 years at The Bakersfield Californian, was selected as the recipient of th…