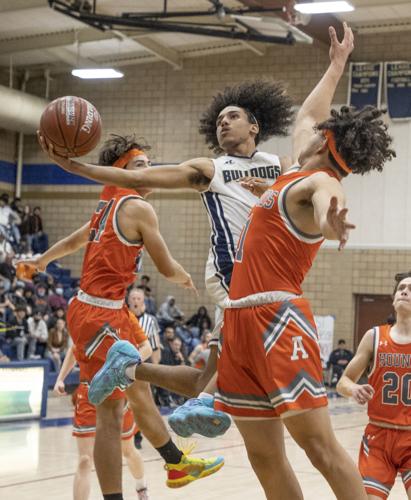 J'len Slaughter goes between two Atascadero opponents to to attempt the two points. 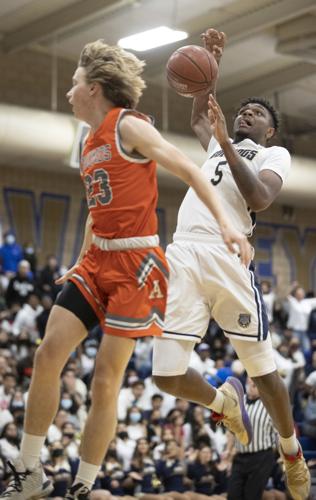 Markell Brooks goes for the rebound against Atascadero's Kaiden Abma. 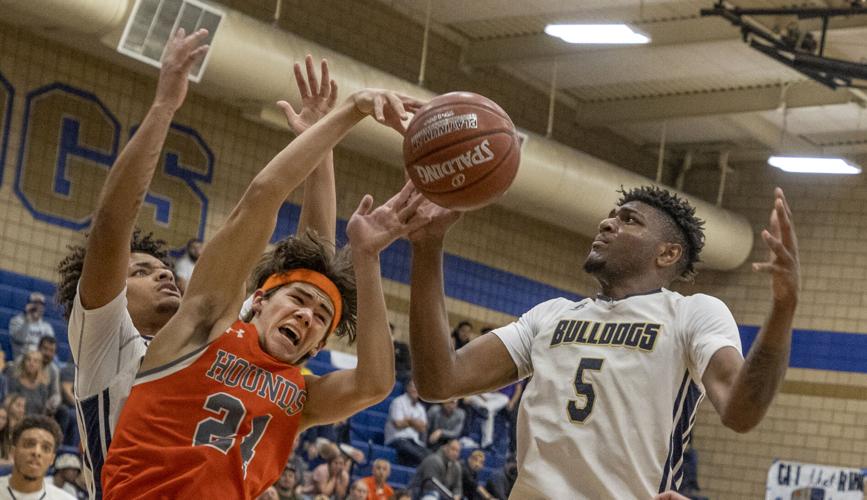 Golden Valley's Ricky Smart, left, and teammate Markell Brooks force a turnover in a game this season against Atascadero.

J'len Slaughter goes between two Atascadero opponents to to attempt the two points.

Markell Brooks goes for the rebound against Atascadero's Kaiden Abma.

Golden Valley's Ricky Smart, left, and teammate Markell Brooks force a turnover in a game this season against Atascadero.

It’s rare to have two playoff games against the same opponent in a single postseason, but that’s exactly what Golden Valley and Atascadero experienced Thursday night.

Just six days after the Bulldogs outraced the Greyhounds in the CIF Central Section championship, led by 25 points from Jermaine Dabbs to an 87-73 win, the teams were back on Golden Valley’s home court again. This time, at stake was a spot in the CIF SoCal Regional boys basketball D-IV semifinals.

No. 6 Atascadero was game, and went blow for blow with No. 3 Golden Valley for more than a half. But the Bulldogs used a crucial 17-4 run to pull away in the third quarter. They looked to Kemonte Jackson, who finished with 26 points, and Markell Brooks, who got 14 of his 21 in the second half.

They had another 10-3 stretch soon after to extend their lead to double digits, and the Greyhounds never recovered, ultimately losing 84-75.

Stevie Waiters led Atascadero (17-12) with 19 points, after tallying 22 in the previous matchup. He was contained in the third quarter until its last few seconds, however, as Golden Valley (23-8) tightened its defense on the perimeter. Corbin Rossi, Logan Reyes and CJ Bell were also in double figures for the Greyhounds.

Both teams played at a breakneck pace and defense was hard to come by, particularly in the first half. In a streaky first quarter, Golden Valley went up 12-11 thanks to 10 quick points from Jackson, who connected from deep twice. But late in the quarter, the Greyhounds came out of a timeout and got a corner 3-pointer from Riley Coalwell to give them a 16-14 lead after eight minutes.

The Bulldogs seemed to put more of an emphasis on getting to the line in the second period, converting eight free throws, but had much less success from the field.

After Dabbs gave Golden Valley the lead back at 32-30, Atascadero got 10 straight points, highlighted by a sequence in which Coalwell connected from deep, then Waiters stole the inbound and got fouled to add two more free throws. The upstart Greyhounds led 45-40 at halftime behind 12 points from Waiters.

Coming out of the break, the teams were evenly matched again initially, as Jackson traded baskets with Bell. But J'Len Slaughter, who slashed through the Atascadero defense all night and posted 19 points, finished a drive through a foul and sank the ensuing free throw to kick off the Bulldogs' best stretch of the evening. Aided by a pair of putbacks from Brooks, who began to dominate on the glass and then even hit a pull-up 3-pointer, Golden Valley stormed back to go up 64-56.

Waiters converted a last-second jumper and the quarter expired, which could have killed the Bulldogs' momentum. But they retained a similar margin and had a series of back-breaking plays: another Brooks putback on a missed free throw by Jackson to make it a 10-point lead, a key transition layup by Jackson and then, when they turned it over, a poor outlet pass that Atascadero threw out of bounds with just under two minutes left, still down 10.

Despite some erratic free-throw shooting, the high-flying Bulldogs cruised to victory, with the final margin at nine points.

The Bulldogs will take on the winner of No. 2 San Diego-Scripps Ranch vs. No. 10 Los Angeles CES in Saturday night’s regional semifinal.