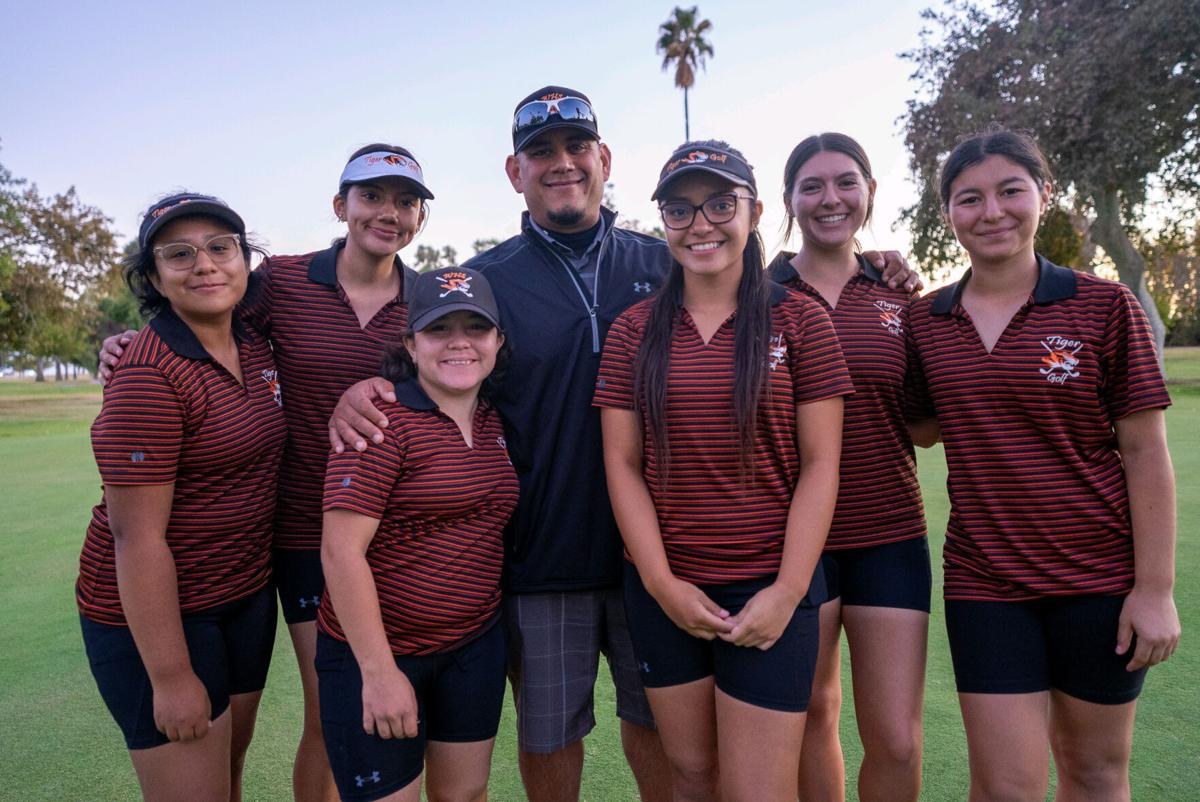 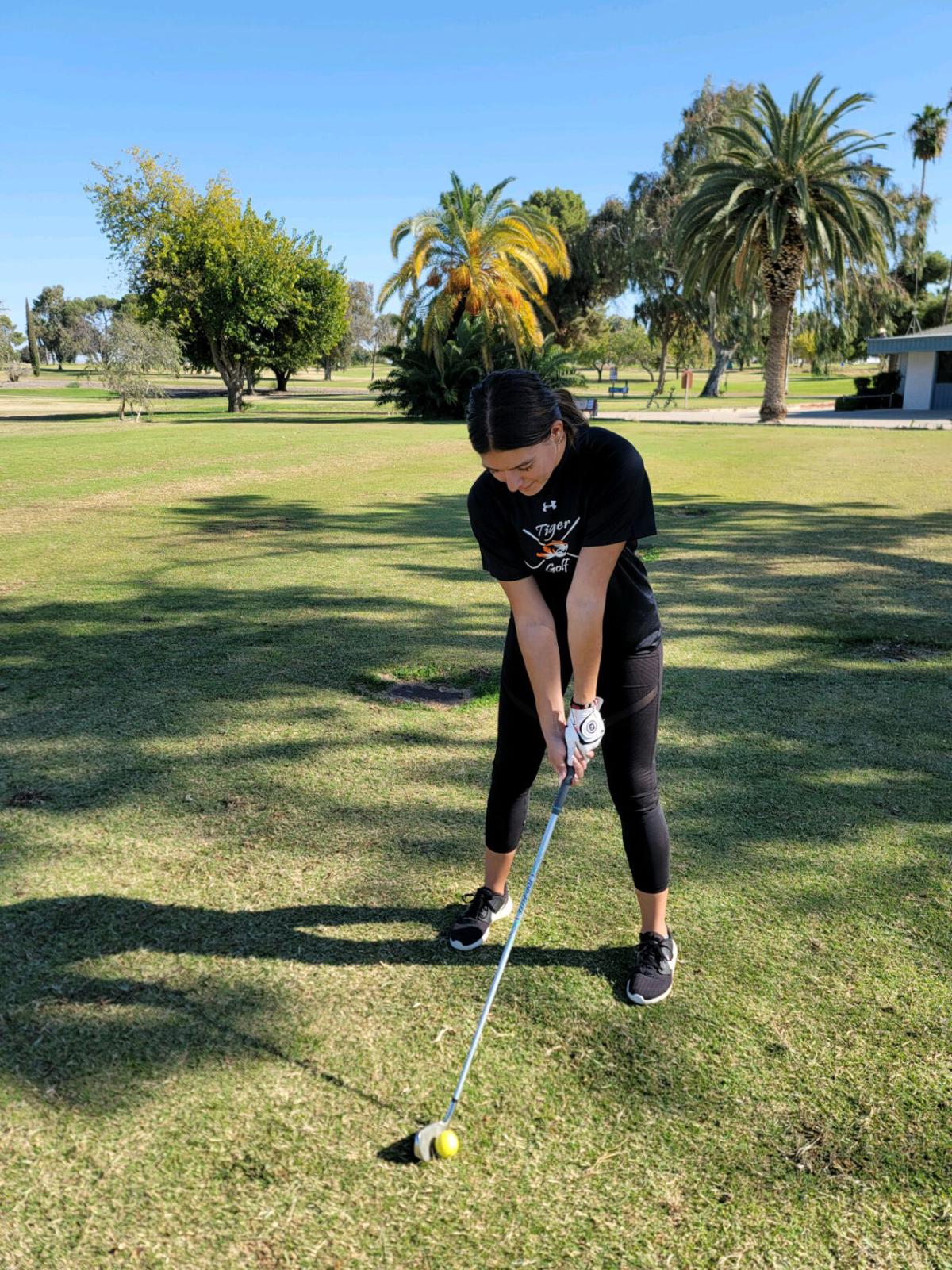 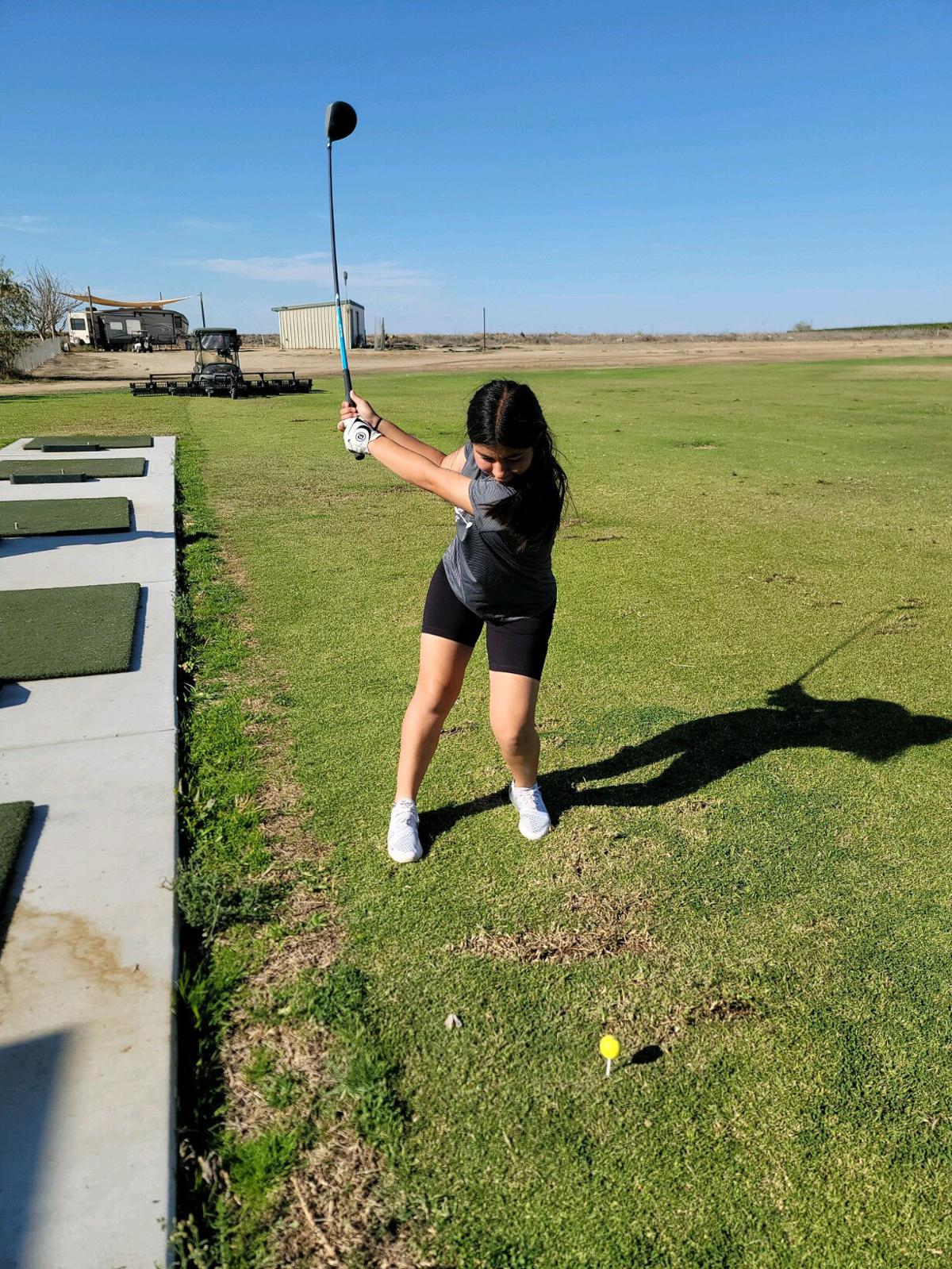 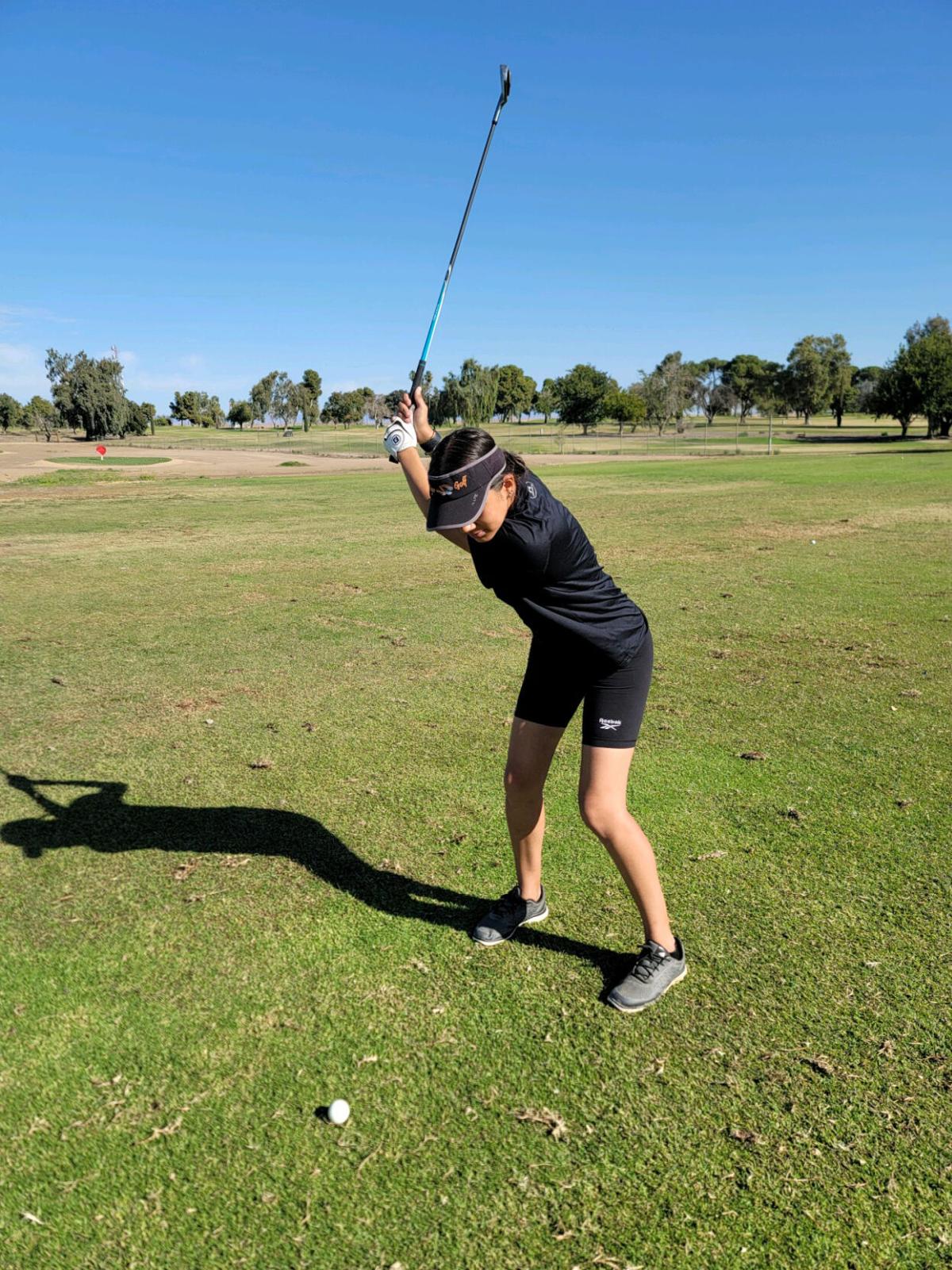 Eighty girls golfers will tee off for the Central Section championships on Monday morning at Kern River Golf Course.

That list will include 17 competitors from Kern County, including the entire Garces golf team and two-time defending champion Iris Han from Stockdale.

Wasco will not be represented, but then again, that shouldn’t come as too much of a shock, especially considering the majority of the Tigers squad had never even picked up a club until seven months ago.

Considering its experience level, perhaps the most surprising fact is that Wasco is even in the conversation at all when discussing the area girls golf scene.

But thanks to a variety of unexpected circumstances that brought them together, the Tigers seven-person team and coach Ed Moreno exceeded all expectations this season, demonstrating a determination and resolve that helped the team overtake perennial-power Taft to win the South Sequoia League championship, and finish just 11 strokes from qualifying for the section tournament.

“I think that’s what’s crazy just to see what these girls have done in six months,” said Moreno, a 1994 Wasco graduate who has coached several sports at his alma mater the past 27 years. “And it’s just amazing to see, I’ve never seen a group of girls that have never picked up a club reacted so quickly to the game.”

Moreno, who coached the Tigers boys golf team for 12 years, had decided to take a break from the sport so that he could watch his son, Farmer, play baseball at Wasco during his freshman year in 2019.

But with the onset of the COVID-19 pandemic and the cancelation of the high school baseball season last year, Moreno’s son decided he wanted to play golf and asked his dad to coach. Moreno obliged, but his decision came with a few strings, like coaching the girls golf team, as well, after it was moved from the fall to the spring of this year.

Moreno’s decision has turned into a pleasant surprise, an experience that in some ways has rejuvenated his passion for coaching.

“I’ve been doing this for 27 years coaching numerous different sports and to me I’m just like, ‘wow,’” said Moreno, who doubles as the defensive coordinator for Wasco’s undefeated football team. “This is a new experience for me, coaching girls. Talk about a shock. Now I’m thinking to myself, I should have coached girls all along.”

With just one returning player in the spring, junior Nyanza Guzman, Moreno had to be creative — and persistent — when trying to fill out his squad.

He visited Zoom classes, asked co-workers and lobbied his own students.

What he attracted was a former cheerleader, Liz Millar, one of her friends Amber Newby, who was not active in sports, and a handful of former softball players in Rose Lopez, Lily Valdez and Birdie Martinez. Another former softball player, freshman Abby Salazar joined the team in the fall.

The group showed up for practice in late February and early March without so much as a club. The school loaned the girls some clubs, and Moreno helped finance a fairway and driver for each player. With limited availability at the closest golf course at North Kern, the team also saved money and utilized a patch of grass adjacent to the football field to learn the ins and outs of the game, eventually learning to chip and driving the ball onto the football field.

But not at first.

“To be honest, when I looked at the situation, I realized I had to break it down to the most minute level,” Moreno said. “I couldn’t even tell them what the clubs were for, really. I just wanted them to hit the ball. So we would get out the 7 iron because it’s the most basic club and so it was all about grip and it was all about feel placement, and it was that basic. And we just wanted them to swing it the correct way, and that’s what we did. We just worked on that and then if they could just hit a ball, that’s all that we were looking for was for them to just make contact.”

After just two weeks of practice on the Wasco campus, the newly-formed girls golf team was thrown into the fire a bit. The school’s athletic director scheduled a match against the class of the SSL, Taft High, and at the Wildcats’ home venue, Buena Vista Golf Course.

For most of the team, the match represented their first time setting foot on a golf course.

“That tournament … I remember, I had never even hit a driver before,” said Valdez, who finished the season with a team-low 112.2 average, just under sophomore Liz Millar’s 112.3. “And I remember they were like, get your driver, and I was like, ‘what’s that?’ And then I hit off the first hole at Buena Vista, and then my second shot, I didn’t know what club to hit, so I grabbed my driver again and I hit it off the ground for my second shot. And looking back, seeing that I knew nothing about golf, and then five, six months later, I know so much more.”

Although Taft, which featured an experienced squad led by senior Macayla Wells and junior Trenadee Price, rolled to an easy victory over Wasco on that day, Moreno saw something special from his team in the aftermath.

“That Taft deal was pivotal just to see how girls could play golf,” Moreno said. “They went to Taft and just got smoked and they could have folded and said, ‘we don’t want to do this,’ but look at them now.

“My girls were not ready. I mean there was no way. So I remember taking them there, and the last thing I wanted to do was discourage these ladies. But they got to see Taft and how good they were and how they hit the ball. Everything was so fluid. And that was pivotal because they could have just quit after seeing that because it was so intimidating seeing Macayla Wells. She was hitting further than guys. But these girls just watched, and I remember making a comment to them, I’m going to tell you right now, next year Macayla’s not going to be around, and next year we’ll be fighting for SSL (title).”

The coach’s prediction more than just came true. Not only did Wasco win the league title, they dominated play, handily winning all seven of the league matches before defeating second-place Taft by 20 shots in the SSL championship tournament two weeks ago.

The turning point was a rigorous summer workout regime, with the Wasco players lifting weights and working on their flexibility during the summer. Moreno also arranged to have the team play a variety of courses, including a “retreat” with his team and their parents on the coast where the girls played five different courses.

“My first two years on the team, our goal was second place,” Guzman said. “That’s what we were and that was the expectation. Taft was going to win and that’s what was going to happen. But now coming into this season it was completely different because the goal is not second place. The goal is a championship. It’s a completely different perspective to be able to see that we can do something and that if we put enough work into it that we can be champions, it just takes work and dedication.”

But it certainly hasn’t been easy, particularly for Lopez, who was fourth on the team with a 120 average.

“Golf is very hard, that’s what I’ve learned,” Lopez said. “Coming out I was like it’s not going to be as hard as it looks, but it was absolutely difficult. I remember hitting my driver, my irons, my fairway wood and they landed like 5 feet in front of me. I’ve definitely improved a lot since the beginning. It’s nice seeing the improvement, but I still need to work on a few things, definitely my long-distance clubs. That’s what I’m trying to focus on right now during practice.”

Working on their golf games has become a priority for many of the players.

“I’m dedicated to playing golf all season, even after the season I plan on practicing golf,” said Valdez, who was first-team All-SSL along with teammates Millar and Salazar. Lopez and Newby were each named second team all-league. “It’s just I’ve never felt the love in softball that I feel for golf. I loved playing softball, but the joy that I get playing golf is just indescribable and something I’ve felt toward anything else. So it really brings me a lot of joy and I see my improvement all the time. And that’s what I really love. And I just want to keep improving.”

“What we’re achieving right now as a team, and the things I’m achieving as an individual, I never would have thought that a few months ago, or even years prior,” Valdez said. “I never envisioned myself playing golf. It’s so crazy, just giving something a try in life, giving something a chance, and trying new things can lead to amazing things.”

And things are only going to get better, according to Moreno, who has high hopes for next season.

“All my girls are very athletic, they’re very humble and they’re very competitive,” Moreno said. “So it’s just really neat to just see where they’ve been, and I know where we’re going to be next year. They just keep improving and there’s no stopping them. And they still have not played their best golf. And just to see them and how knowledgeable they are and how they are with the game, I think that’s probably the most amazing thing that I see with them. They have really, really taken to this game. And they get it, they understand it, and you’re going to see some good things from these girls next year. I mean it’s going to be amazing. And I’m excited about it.”