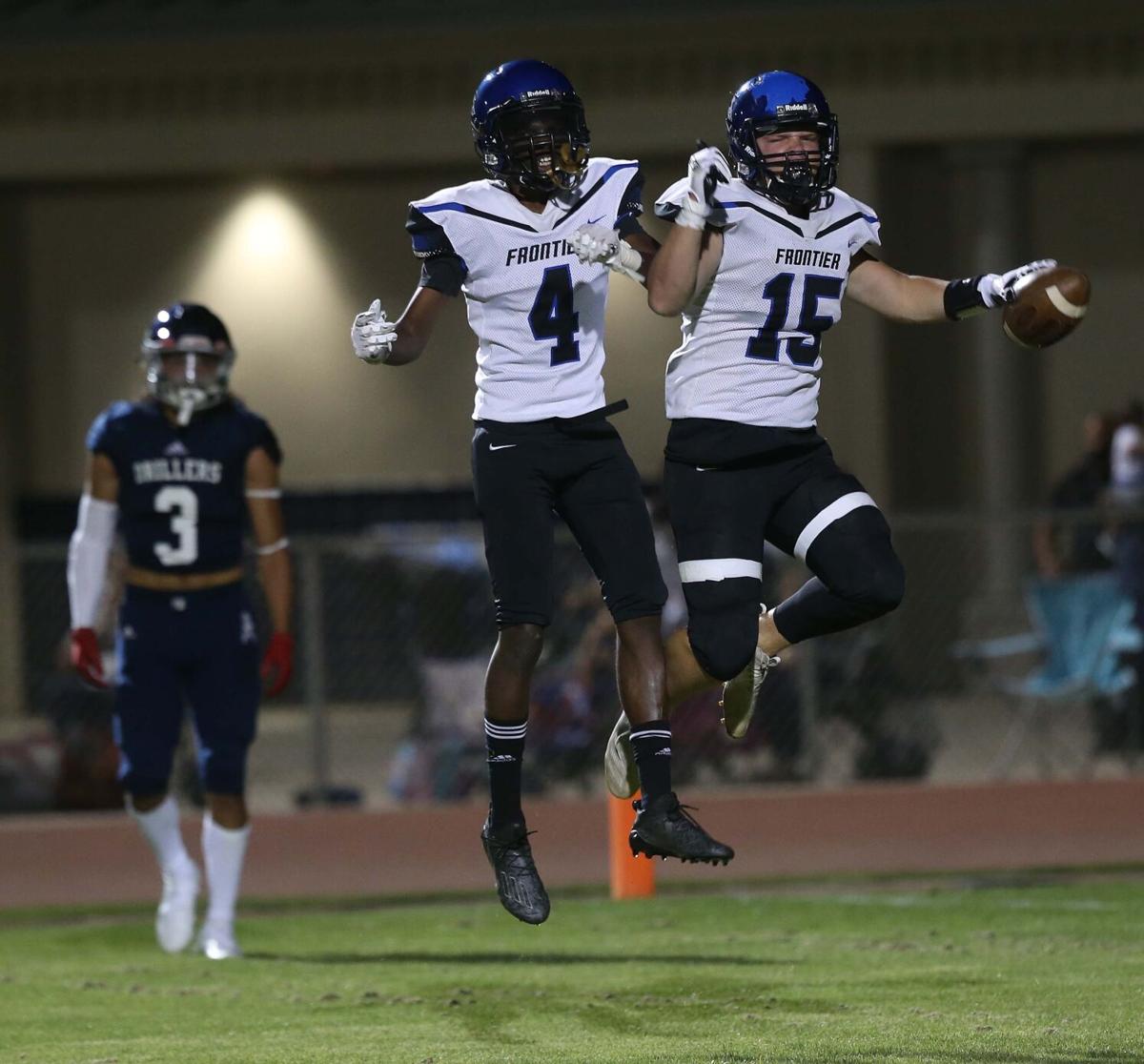 Frontier's Jaden Perez celebrates with teamamte Danny Overton after Overton caught a 30-yard touchdown catch in the first half of Friday's game at Bakersfield High. 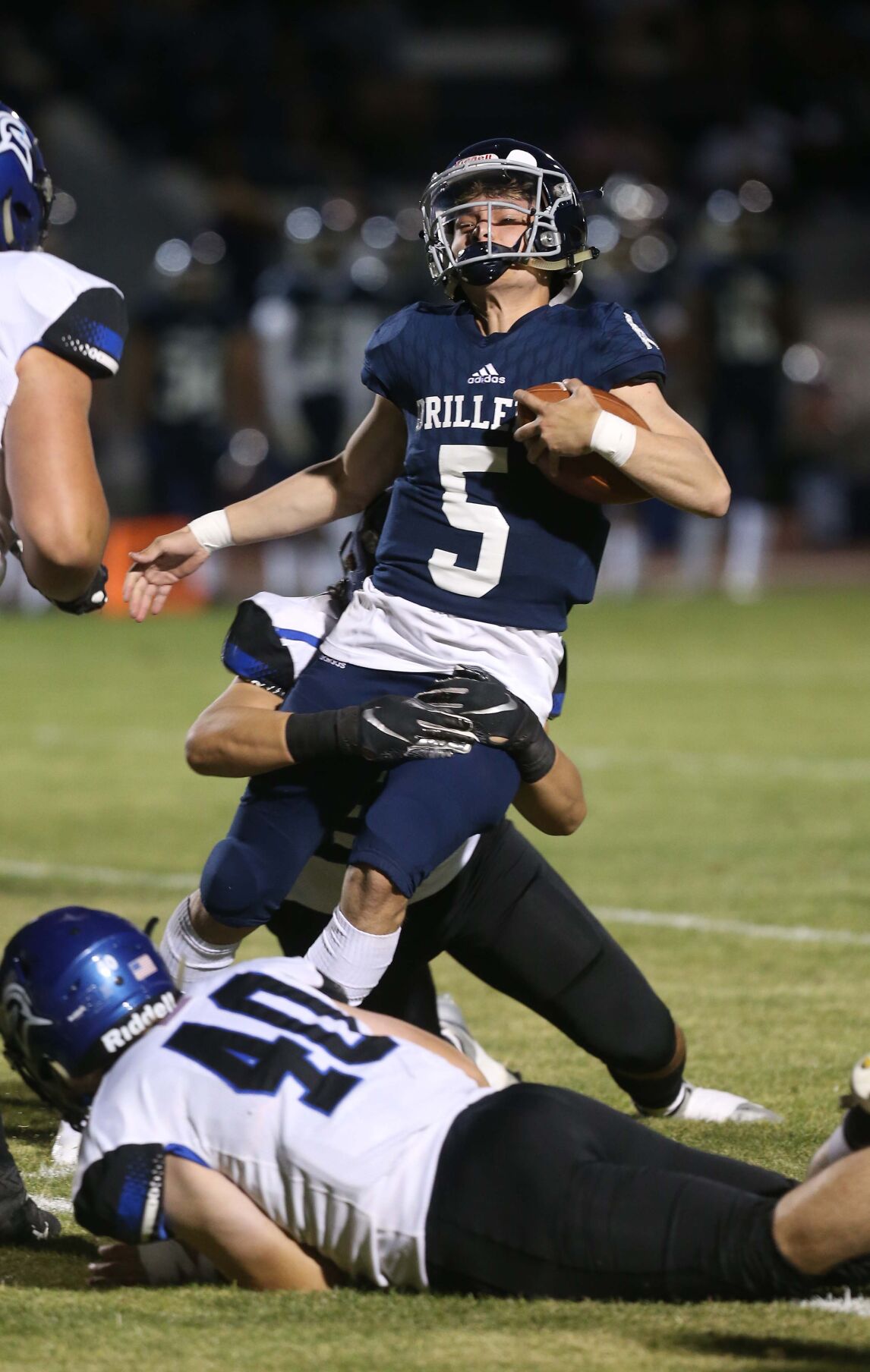 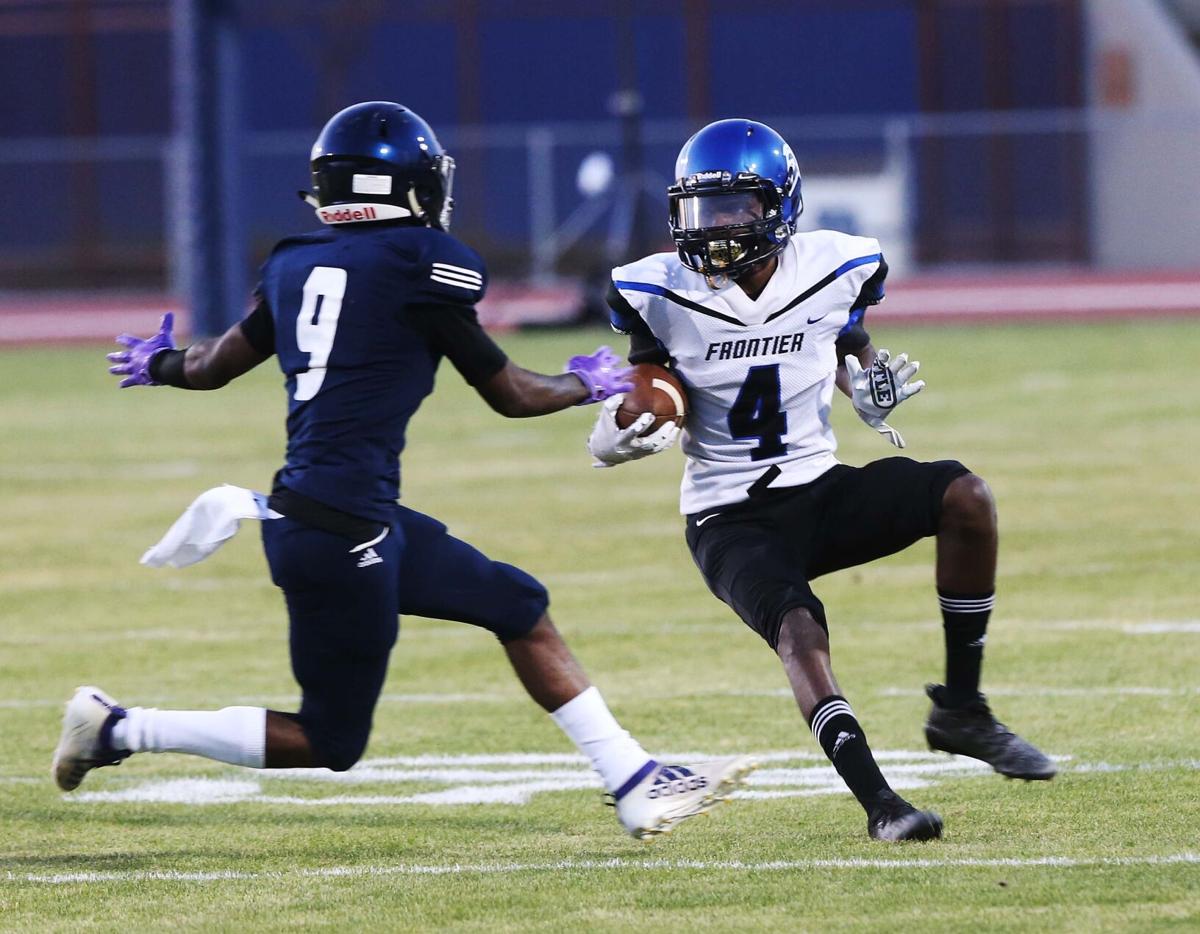 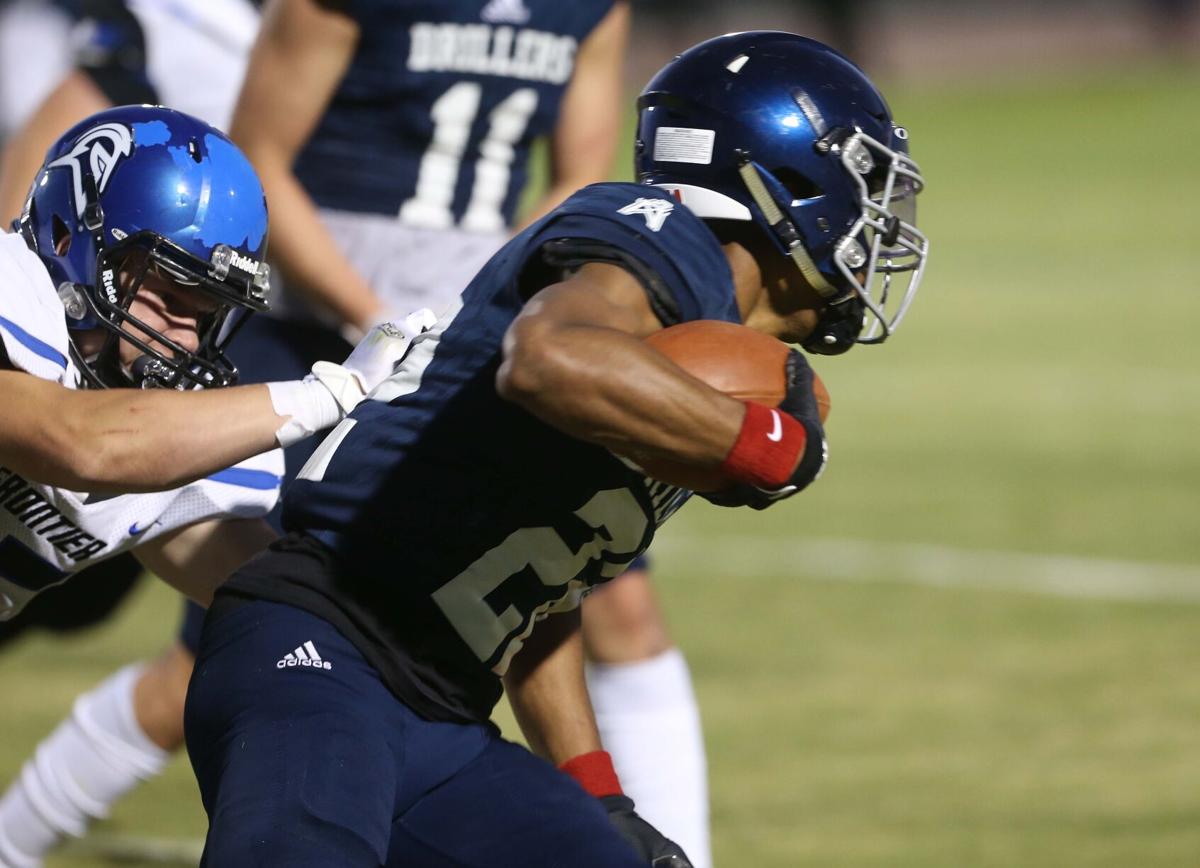 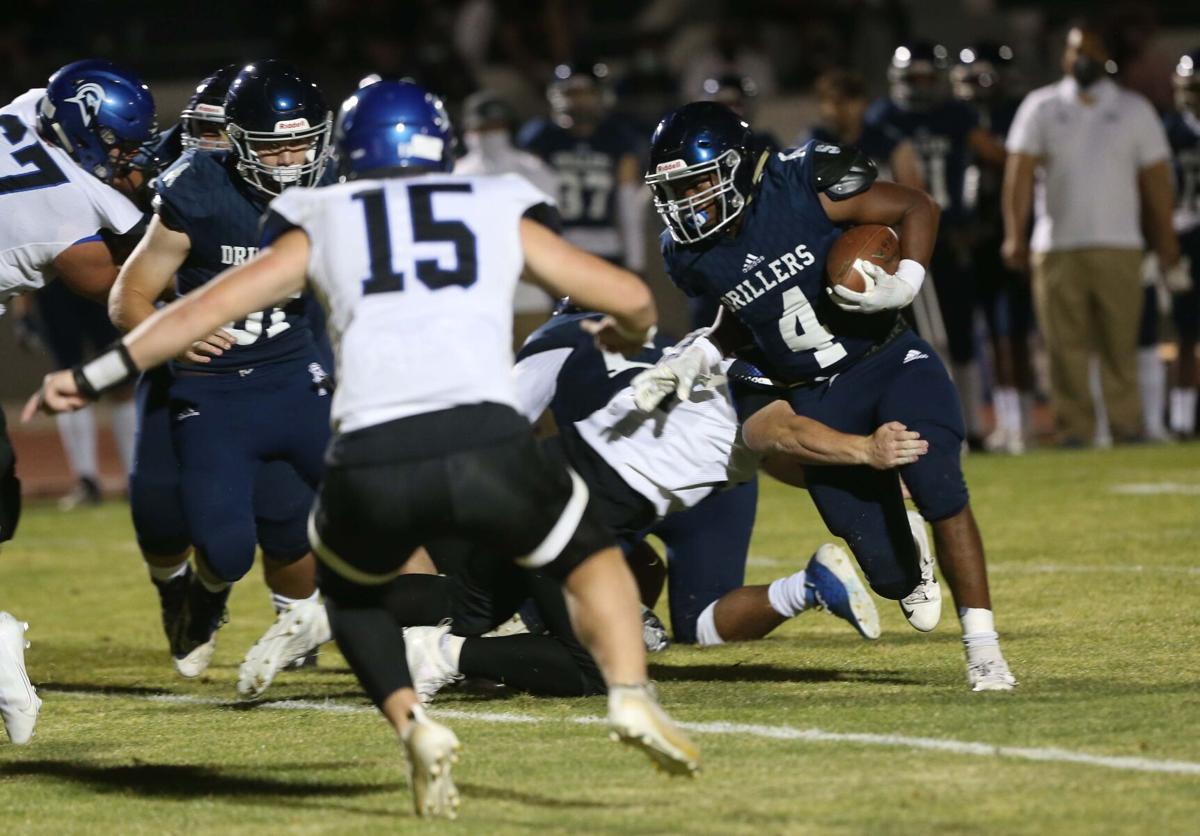 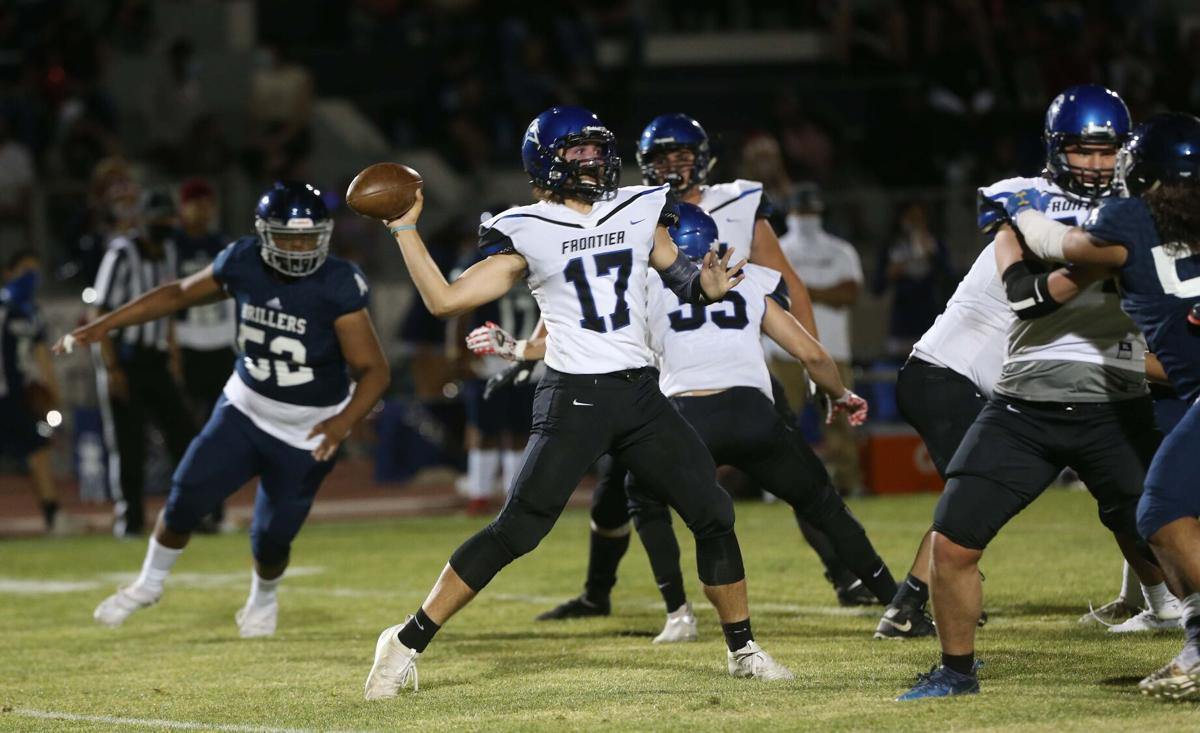 Frontier quarterback Vincent Igoa passes in the first half against Bakersfield High. The game was played at BHS. 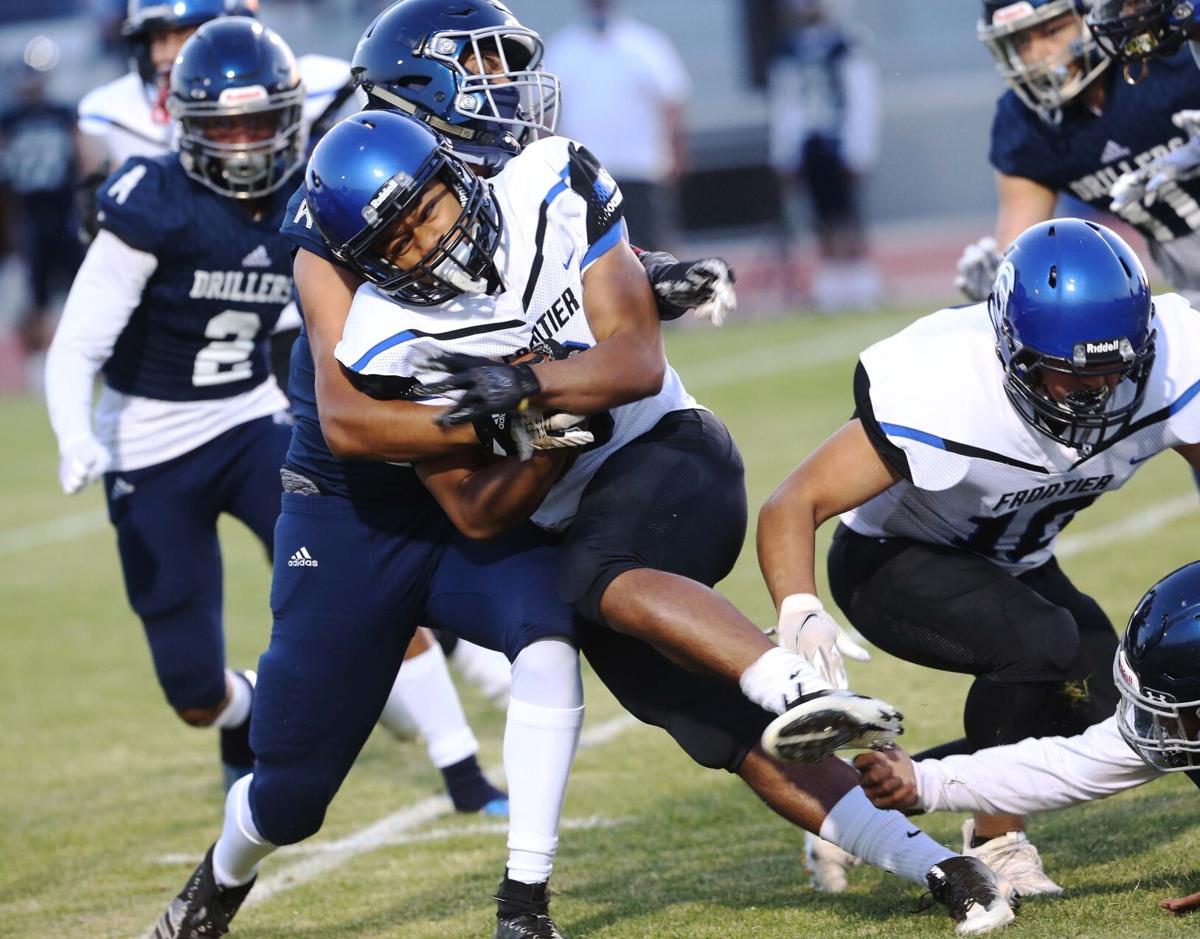 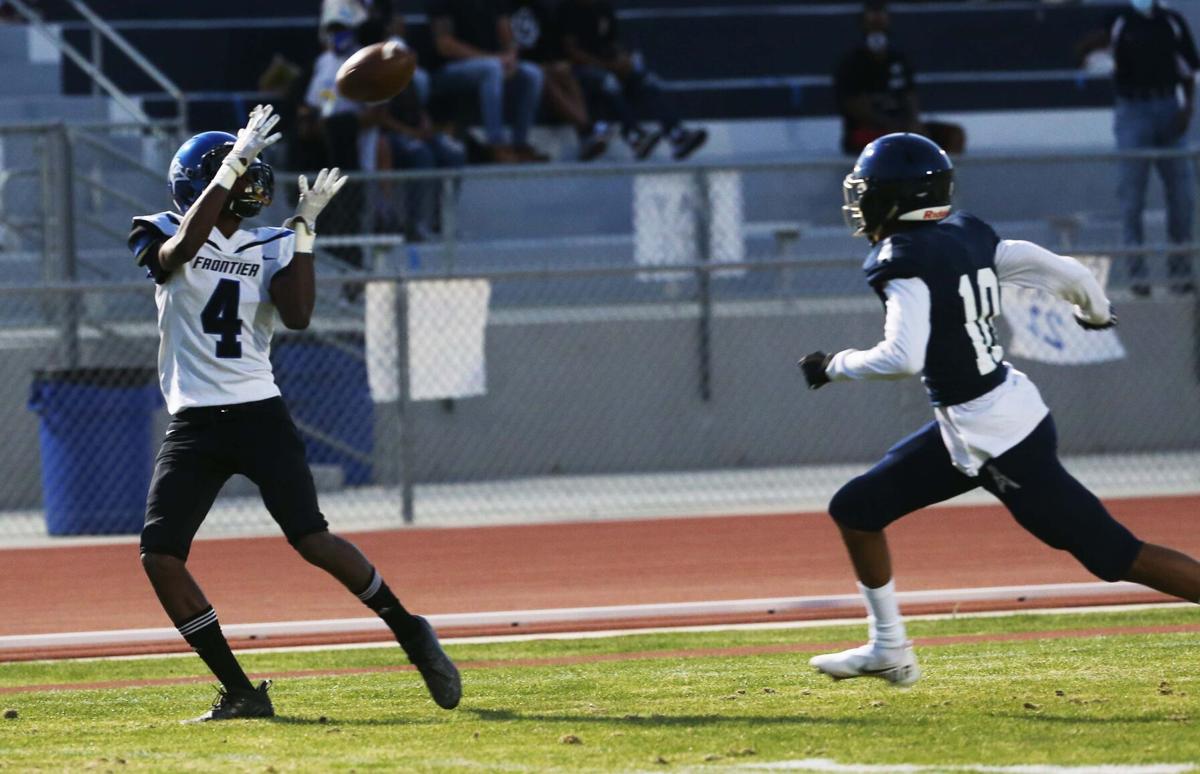 Frontier's Jaden Perez catches a long pass as Bakersfield High defensive back Xzavian MacKey forces him out of bounds in first half action at BHS on Friday. 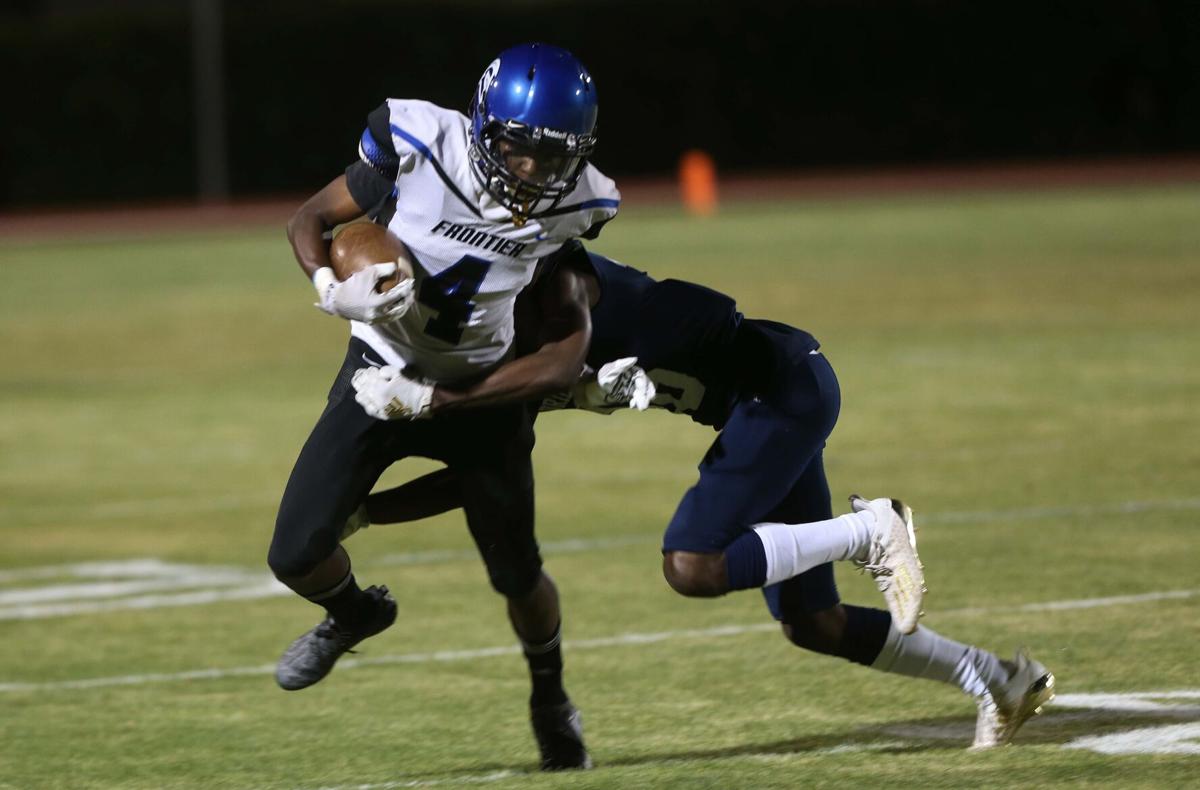 Frontier's Jaden Perez celebrates with teamamte Danny Overton after Overton caught a 30-yard touchdown catch in the first half of Friday's game at Bakersfield High.

Frontier quarterback Vincent Igoa passes in the first half against Bakersfield High. The game was played at BHS.

Frontier's Jaden Perez catches a long pass as Bakersfield High defensive back Xzavian MacKey forces him out of bounds in first half action at BHS on Friday.

Preparation for this week’s matchup with Bakersfield High took on a special meaning for Frontier junior Danny Overton.

Following the tragic death of his brother, the 17-year-old Overton missed two days of practice, and there was some question whether he’d even play Friday night.

But for Overton, there was never any doubt.

“It was important for me to come out here because football is just like another thing that keeps that type of stuff off my mind,” Overton said. “I mean he was still on my mind, but honestly I’m just happy I came out here and played for him.”

And play he did.

The 5-foot-10, 195-pounder, who splits time at linebacker and running back, scored two touchdowns, including a 37-yard scoring run in the fourth quarter to lead Frontier to a 28-7 victory over the Drillers, the school’s first win against BHS since 2012.

“Honestly, it was a pretty tough week for me, but I came out here and I played for my brother,” Overton said. “And I feel like I made him proud up there, so … I’m just happy to play for him, you know? I knew coming out here I was going to play hard for him.”

With the Titans already ahead 7-0, Overton hauled in a 30-yard touchdown pass from quarterback Vincent Igoa with 3:11 left in the first half.

Then early in the fourth quarter after Bakersfield had trimmed the lead to 14-7, Overton gave his team some breathing room, capping an 11-play, 76-yard drive with his long touchdown run with 9:17 to play.

“I just want to thank my line because I couldn’t have done that without them,” Overton said.

“I saw the open field and I tried to get into the end zone as fast as I could. I didn’t want to get caught and I’m happy I got in there. I was dead-beat tired, but I was trying to get another one, and I did.”

Overton accounted for 68 yards on the drive, finishing with 74 yards and 10 carries, all in the second half.

“He was the heart and soul this week,” Frontier coach Chris Bandy said. “He came out and he’s our heart and soul on defense and offense. He was going both ways and he was a warrior tonight. He carried us to victory for sure.”

The Drillers (1-1) hadn’t played in two weeks because of COVID-19 protocols and were still missing a few key players that have yet to be cleared to play. Not surprisingly, the team struggled to move the ball in the first half, and trailed 14-0.

But a steady dose of senior running back Blaine Abbott to start the third quarter seemed to give Bakersfield new life.

A big second-half kick-off return by sophomore Tybo Rogers gave the Drillers field position near midfield, and four strong runs by Abbott had BHS on the move.

Although the drive stalled following a penalty and a third-down sack, Bakersfield continued to gain momentum when the Drillers capitalized on a 7-yard punt by Frontier. Three plays later, BHS scored its lone touchdown of the game. Drillers quarterback Vincent Cuellar, playing in place of starter Ayden Moreno, fumbled the snap on a second-down play from the Titan 4, but picked it up and strolled into the end zone to trim Frontier’s lead to 14-7 with 4:28 left in the third quarter.

Xzavian Mackey intercepted an Igoa pass on the next possession and Abbott followed with a 56-yard run before being tackled on the Frontier 26. But the Drillers fumbled on the next play, and the Titans marched down field to take a 21-7 lead. Abbott finished with 130 yards rushing on 19 carries, 97 yards coming in the second half.

“They came out in the second half and had a couple of really good runs and kind of moved down the field on us,” said Bandy, whose team scored its final touchdown when Byron Floyd fell on a fumbled snap in the end zone on A BHS punt attempt with 1:52 to play. “That kind of took us off guard a little bit, but we started making some plays and throwing them for some losses, and obviously a big turnover at the end to ice it, but (BHS) played good.

“We knew they had a couple of guys out, so maybe we were a little overconfident when we came in here, but you have to give them credit. They played tough and it took everything we had to win.”

Frontier (2-1), which led undefeated Liberty 19-17 in the fourth quarter before losing 23-19 last week, scored on its opening possession of the game. Igoa connected with Mason Tapia for a 4-yard touchdown pass with 6:07 left in the first quarter.

“At halftime we made some adjustments to our run game, and kind of challenged our O-line, and they came out in the second half and played really well. So I’m really happy with that. With us I think it’s just trusting in the process and sticking with what you’re good at. And even though we had a few mistakes, you have to keep counting on them and keep believing in them and they made the plays at the end when they needed to.”