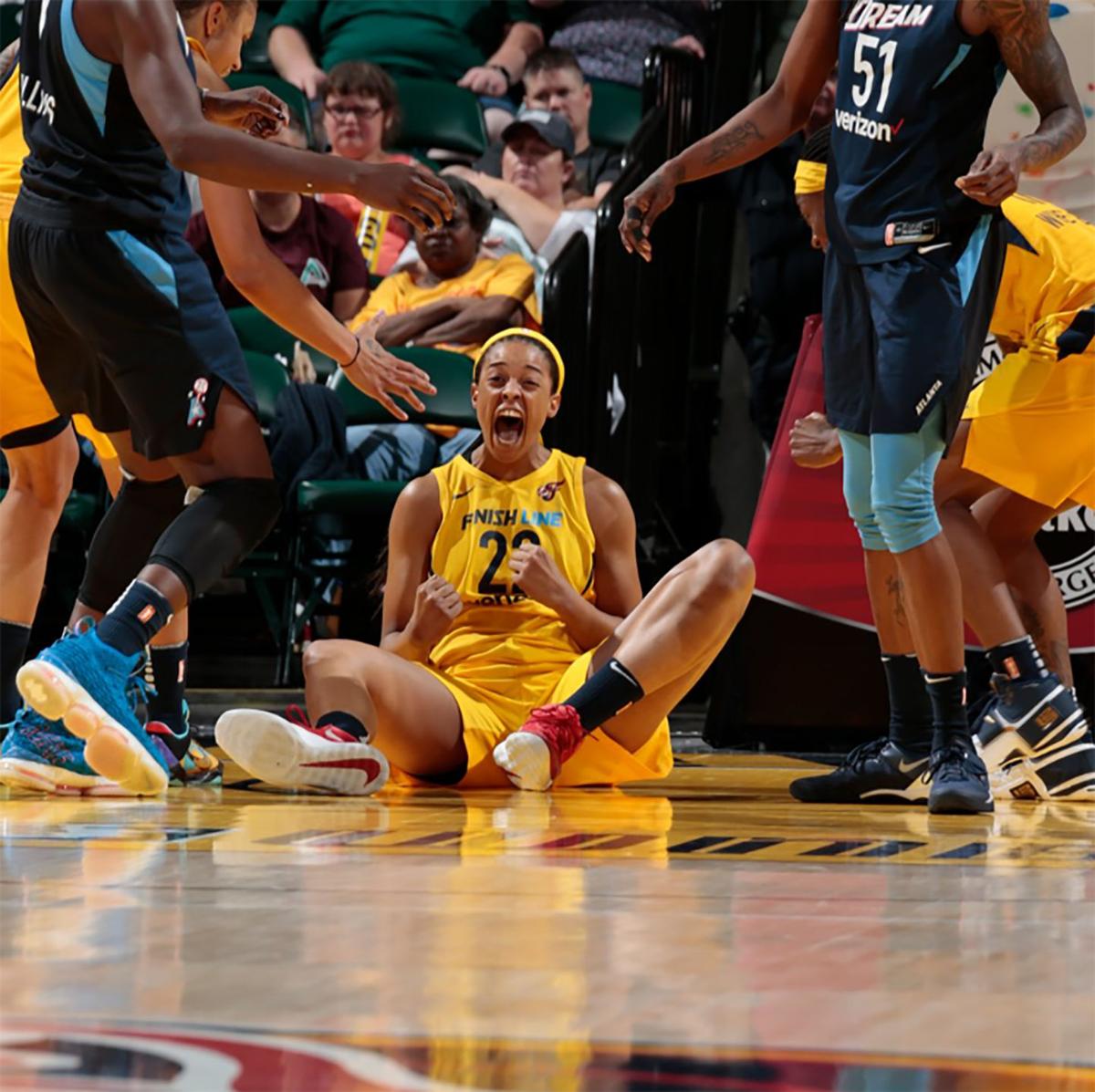 Former Ridgeview High standout Erica McCall celebrates as a member of the Indiana Fever of the WNBA. McCall is currently a free agent hoping to sign with another WNBA team after three seasons with Indiana. 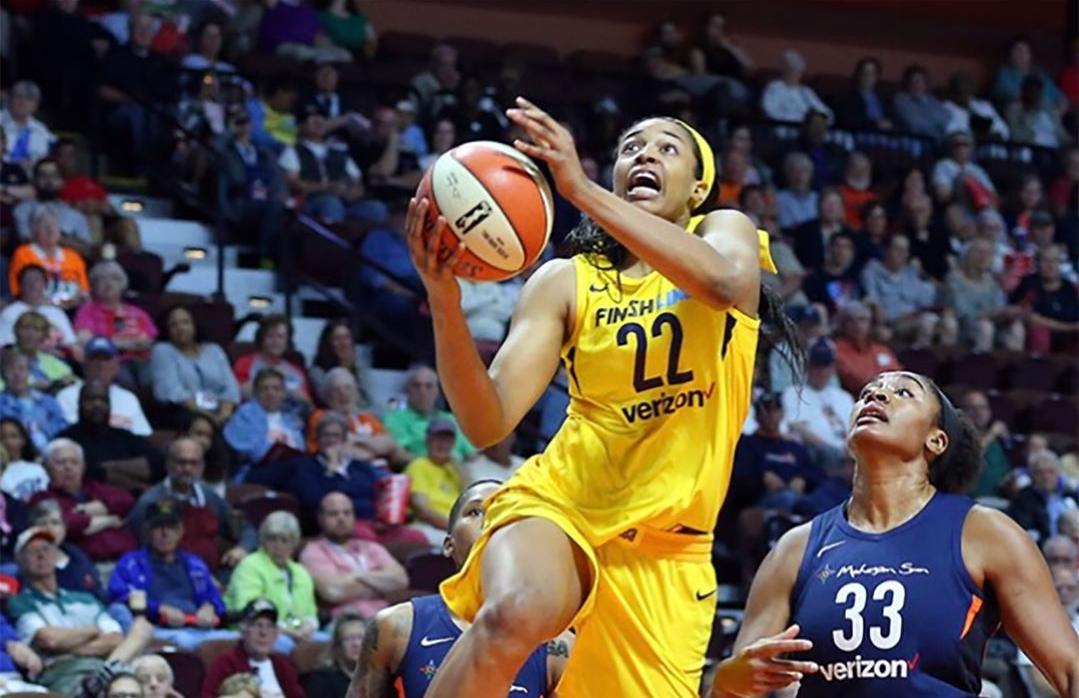 Former Ridgeview High standout Erica McCall goes up for a basket with the Indiana Fever of the WNBA. McCall signed with Atlanta on Sunday. 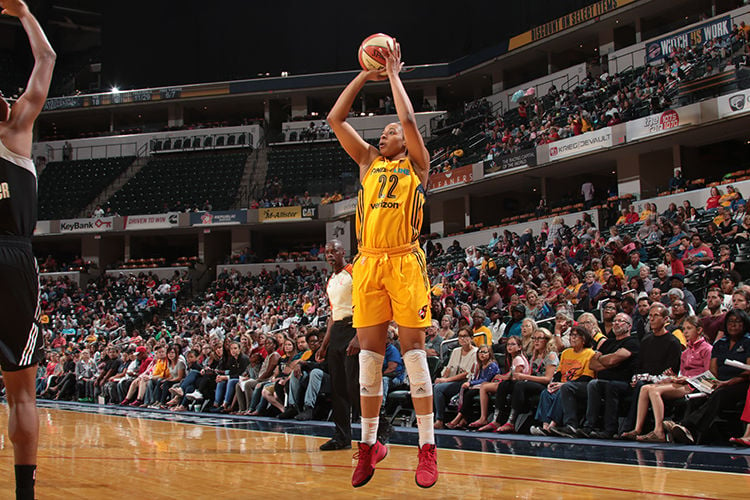 Ridgeview graduate Erica McCall takes a jump shot for the Indiana Fever in a 2017 game. 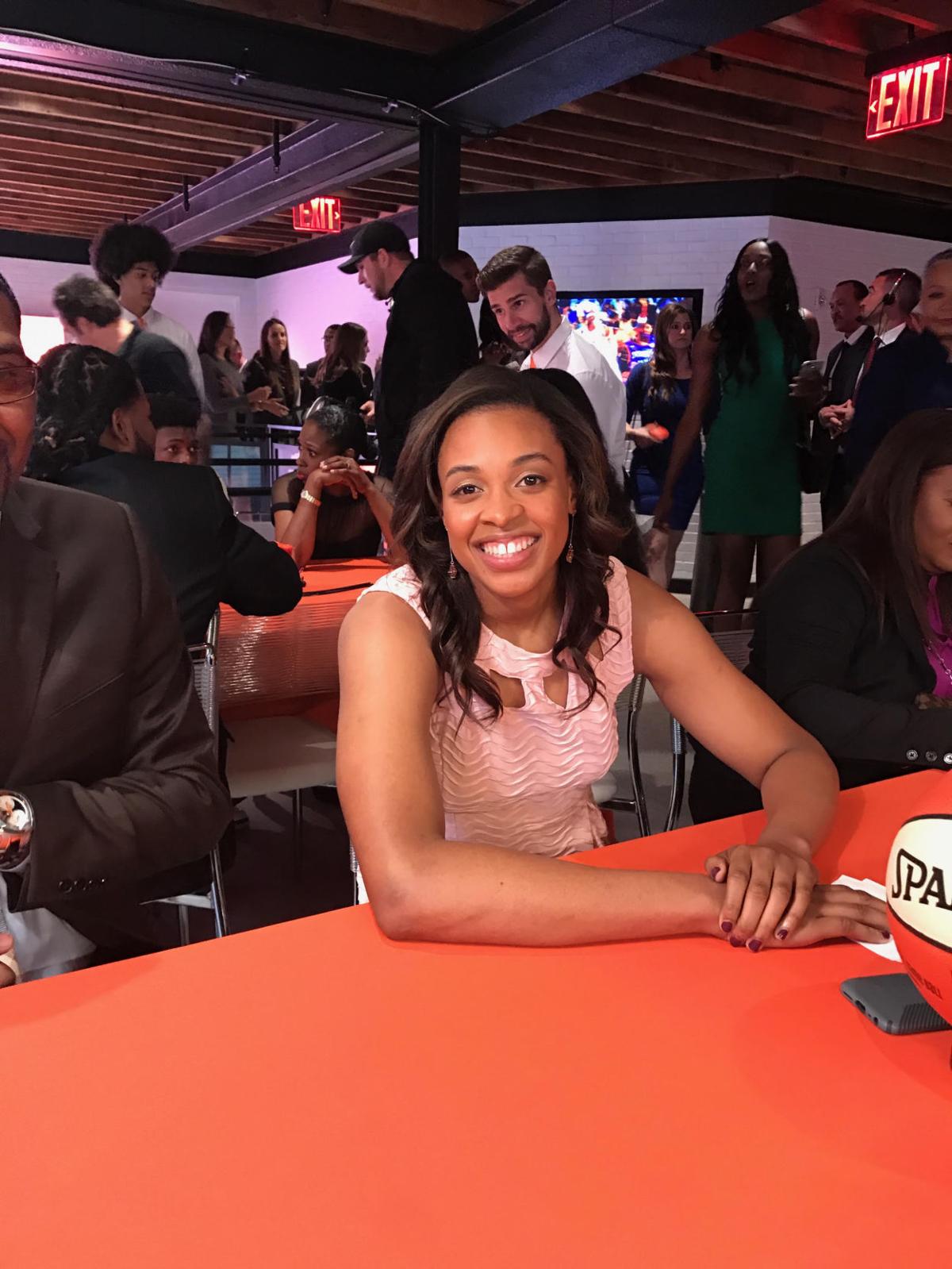 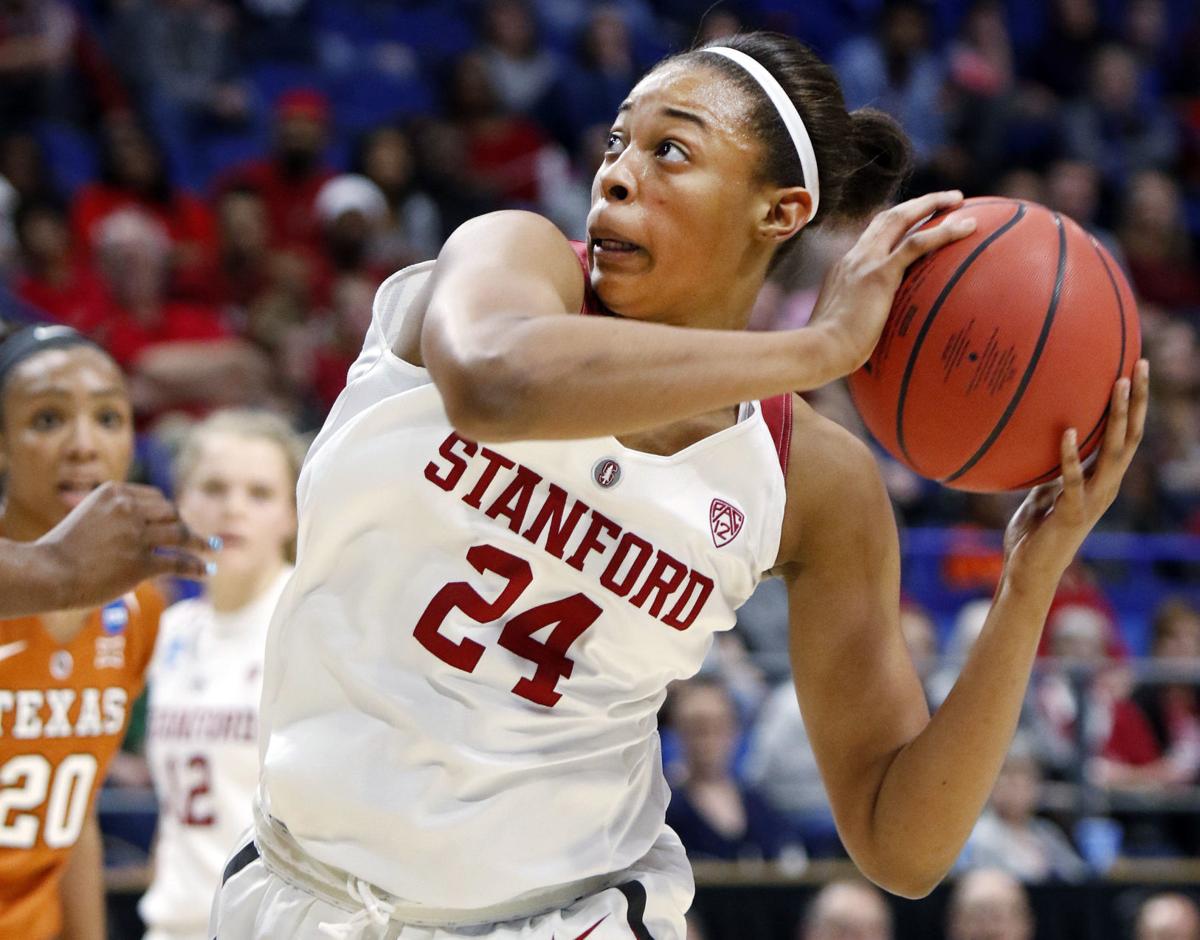 Former Ridgeview High standout Erica McCall, who led Stanford to the Final Four in her senior season, is in her third season with the WNBA’s Indiana Fever. 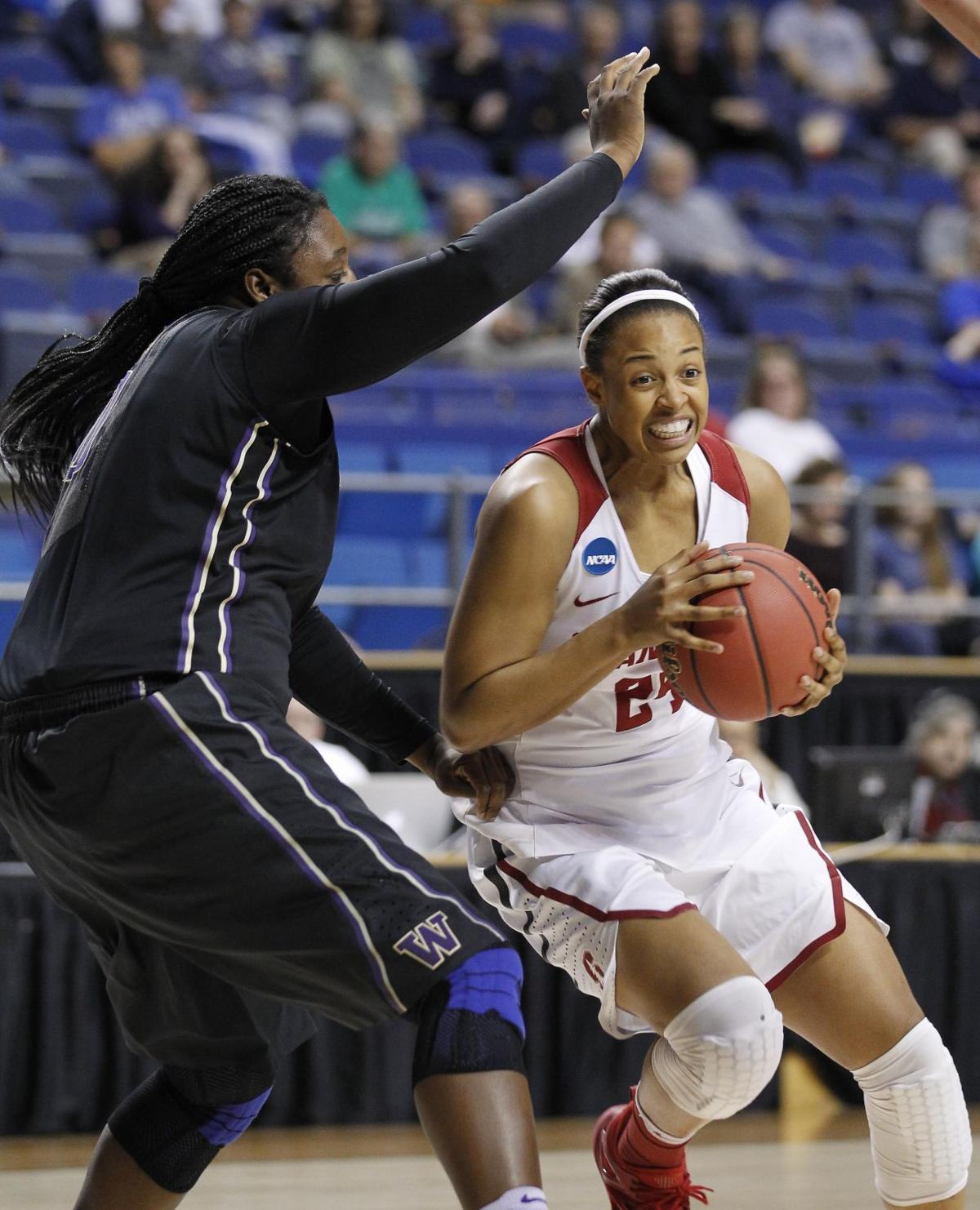 Stanford forward and Ridgeview High graduate Erica McCall takes the ball to the basket against Washington forward Chantel Osahor during the first half in the finals of the Lexington regional of the women's NCAA Tournament at Rupp Arena on Sunday. 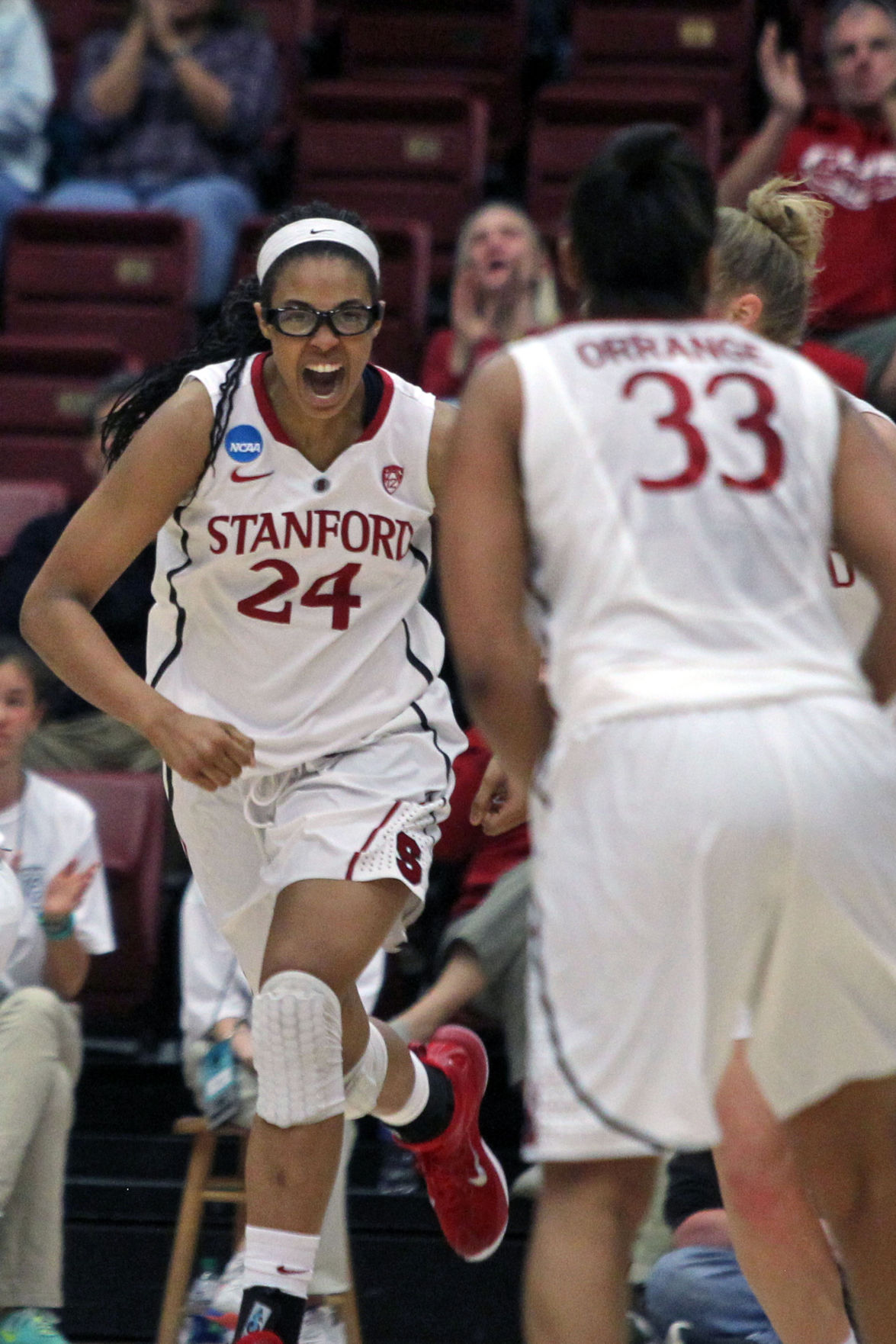 Stanford forward Erica McCall, a Ridgeview high graduate, celebrates making a 3-point shot against Oklahoma in the first half of their game in the second round of the women's NCAA Tournament

Former Ridgeview High standout Erica McCall celebrates as a member of the Indiana Fever of the WNBA. McCall is currently a free agent hoping to sign with another WNBA team after three seasons with Indiana.

Former Ridgeview High standout Erica McCall goes up for a basket with the Indiana Fever of the WNBA. McCall signed with Atlanta on Sunday.

Ridgeview graduate Erica McCall takes a jump shot for the Indiana Fever in a 2017 game.

Former Ridgeview High standout Erica McCall, who led Stanford to the Final Four in her senior season, is in her third season with the WNBA’s Indiana Fever.

Stanford forward and Ridgeview High graduate Erica McCall takes the ball to the basket against Washington forward Chantel Osahor during the first half in the finals of the Lexington regional of the women's NCAA Tournament at Rupp Arena on Sunday.

Stanford forward Erica McCall, a Ridgeview high graduate, celebrates making a 3-point shot against Oklahoma in the first half of their game in the second round of the women's NCAA Tournament

As Erica McCall sits in her childhood bedroom, she can’t help but be reminded of where she’s been.

There's no way around that. What she sees is a visual snapshot of her teenage self, in what seems like a lifetime ago. Pink and peach colored flowers decorate the walls, peeking out behind posters and photos of her days as a two-time all-Pac-12 basketball player at Stanford.

Another poster features her sister, WNBA all-star DeWanna Bonner and one that speaks to the importance of God in her life. On one wall, there's a list of goals she made as an 8th-grader at Stonecreek Junior High. On her shelf sits one of her prized possessions, a commemorative black Barbie that her mom gave her when she was six years old.

And, oh yeah, there’s trophies. Trophies … trophies … and more trophies. They're seemingly everywhere. All accumulated as one of the best women’s basketball players Kern County has ever seen.

“It feels like I’m in a 16-year-old’s room,” said McCall, who has been living with her mother in Bakersfield the past four months during the COVID-19 pandemic. “I have all the posters on the wall, I have flowers all in my room, all the trophies from growing up, so it’s very nostalgic being back home.”

It also served as motivation for someone, who, well, has never really faced adversity on the basketball court.

By the time the 6-foot-2 McCall earned a scholarship to play for the Cardinal she had amassed a basketball resume that most could only dream about.

From victories at the international level with junior USA national teams and FILA national titles with her traveling team to leading Ridgeview to three Central Section titles, McCall seemingly set the bar higher with each passing year.

But following a stellar career at Stanford, things have slowed a bit since she was selected in the second round of the 2017 WNBA Draft by the Indiana Fever.

McCall, who will turn 25 next month, was released in May after three years with Indiana, a time when she struggled to get quality minutes.

“It was definitely a difficult process,” said McCall, who has also played the last three seasons in Hungary. “It wasn’t so much my first year, because you’re a rookie and you’re just in for the ride. And I was the only rookie on my team so I didn’t really have a lot of expectations for much. I was just kind of going with the flow.

“But in my second and third year it became a little more difficult for me, mentally, and I can say that I honestly lost a lot of confidence. Being on the bench a lot and having to sit back and watch my teammates … I tried to be as supportive as I could for my teammates and to be the most optimistic person that I could be, but it did take a toll on me mentally.”

That came to a head just a few months after the COVID-19 pandemic had taking hold, forcing the abrupt ending of her third season with Atomeromu KSC Szekszard of Hungary's A-Division League as the team was set to open the playoffs.

A disappointed McCall returned home to Bakersfield. After doing some soul-searching, she found some clarity, and a unique way to pass her time. During the first 14 days of being quarantined, she posted a variety of dance videos to social media. The popularity of the videos exceeded her expectations, while at the same time reminded her of what she hopes to do after retiring from playing basketball.

“My initial goal was just to make people smile and try to give them some uplifting motivation during this crazy time in the world, but it actually turned out to be very good for me because it helped grow my brand,” McCall said. “Ultimately I want to become an entertainer when basketball is done, and maybe get into sports commentating, and my ultimate goal is to have my own talk show.”

McCall has also used her time off to reconnect with her family.

“It’s been, in a way, a blessing in disguise because I’m never home at all,” McCall said. “I’m probably home two, three times a year. So although I’m very sad that people are dying and are getting sick, in my situation it’s been kind of a blessing for us because I get to spend a lot of family time out here in Bakersfield where I never get to do that.”

It also led to a bold choice. Fresh off averaging a team-high 14.3 points and 9.1 rebounds last season for Atomeromu, McCall decided she needed a change of scenery heading into the WNBA season. After discussing her options with Fever management, both parties agreed to part ways.

“It was just a lack of opportunity,” McCall who averaged just 6.9 minutes per game last season for Indiana. “We had a lot of vets that were ahead of me, and just with their years of experience, it was hard for me to get a lot of playing time. So to truly grow … getting on the court … ultimately, how you become better is through playing. I just wasn’t getting much playing time with that, so we all knew what the situation was, so I had no issues and no bad blood with Indiana at all. We all discussed it would be a good opportunity for me to just go see whatever options there are for me with a different team.”

Unfortunately, with the pandemic forcing the cancellation of WNBA training camp, McCall has had difficulty latching on to another team. While the NBA prepares to complete their season in Orlando, the WNBA is planning a 22-game schedule with all players sequestered at IMG Academy in Bradenton, Fla.

“I do think if it wasn’t for COVID I would have already been on a training camp roster for sure,” McCall said. “I think I would have already been picked up for that and had an opportunity to try out for a team, for sure. And because there hasn’t been any training camp it’s been difficult to try to get on a team. So that’s been a challenge for sure because teams just have to trust in what you can do instead of being able to see how you’ve been with a team and all the plays and the system.

"But I have been hearing some interest from some teams, which is hopeful for me. But I’m staying optimistic about everything and I’m positive that I can get back into this league.”

While she waits for the phone to ring, McCall has committed to play in Hungary again this season, that is, unless she receives a WNBA offer.

“I’ve just been working out waiting to hear back from my agent,” McCall said. “So whenever something comes up … there’s a lot of people opting out right now, so I can get an opportunity through that. As people start to experience the bubble, more people might begin to drop out if they don’t like it. People are getting health hardship waivers, so I may get an opportunity through that. It’s just all a waiting game.”

In the interim, McCall continues to enjoy her time at home, and a rekindled desire to succeed.

“This offseason I’ve really just been working on my confidence, getting back into what I do, what I know I can do, and hopefully that shines when I get an opportunity to play with another team.

“I have so much more to prove and that’s why I want to get back into this league. I want to show people because I don’t think people really got a valid opportunity to see what I can do as a player in the league. I’ve been working crazy hard with a lot of different types of workouts. I’ve almost lost 10 pounds and I’ve been working really hard just to stay in shape and to stay ready because I never know when that phone call is going to come.”