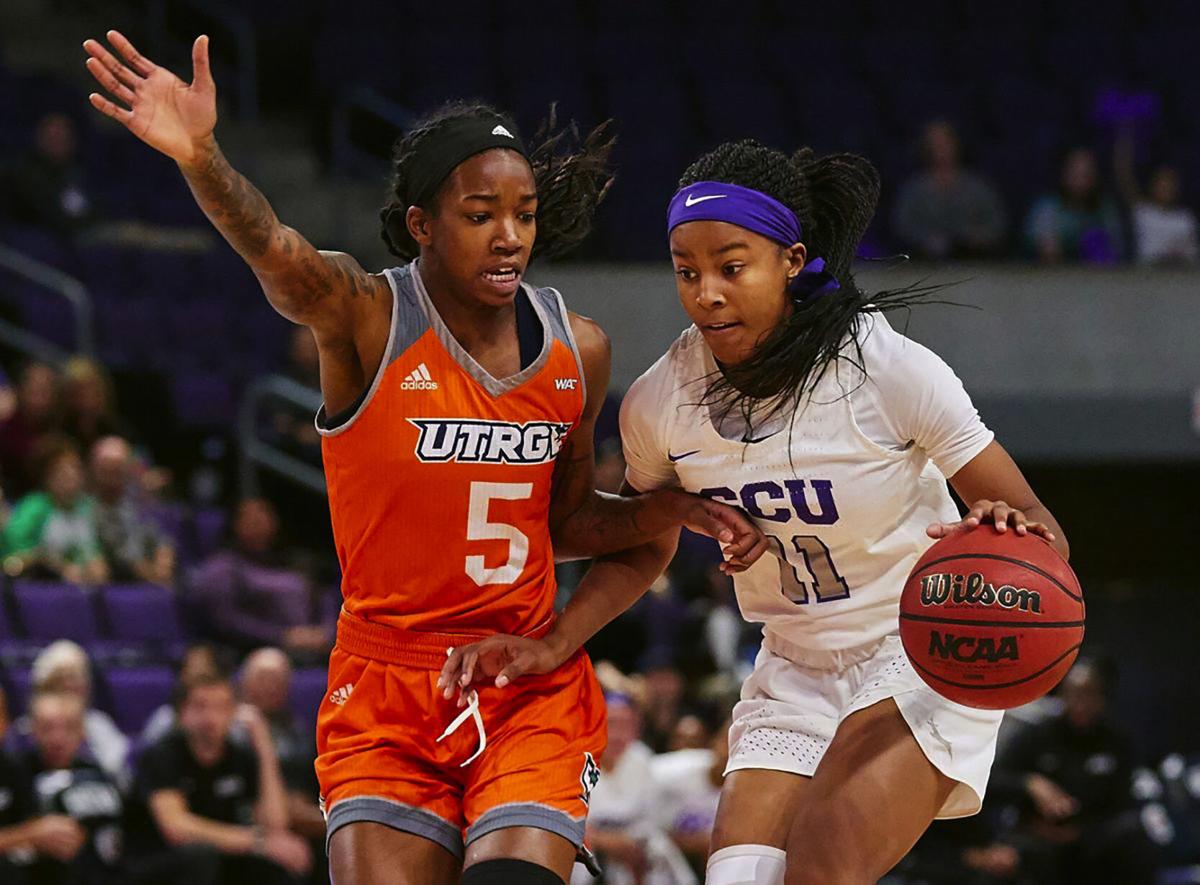 Former Bakersfield High star Taylor Caldwell, right, moves the ball up the floor against Rio Grande Valley in a game in 2019. Caldwell, a redshirt sophomore at Grand Canyon, is looking to return from a torn ACL, suffered a week before the start of the 2019-20 season. 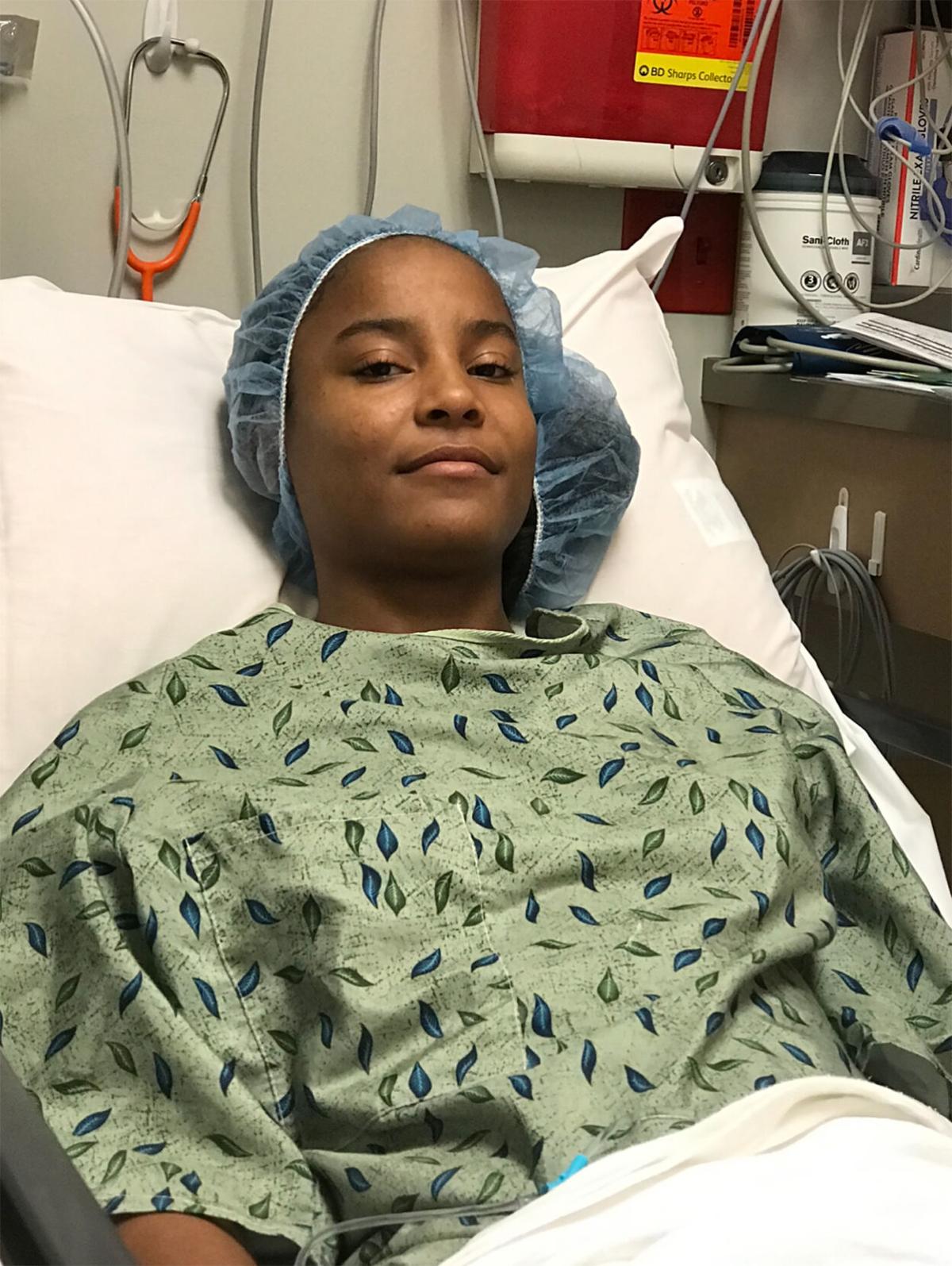 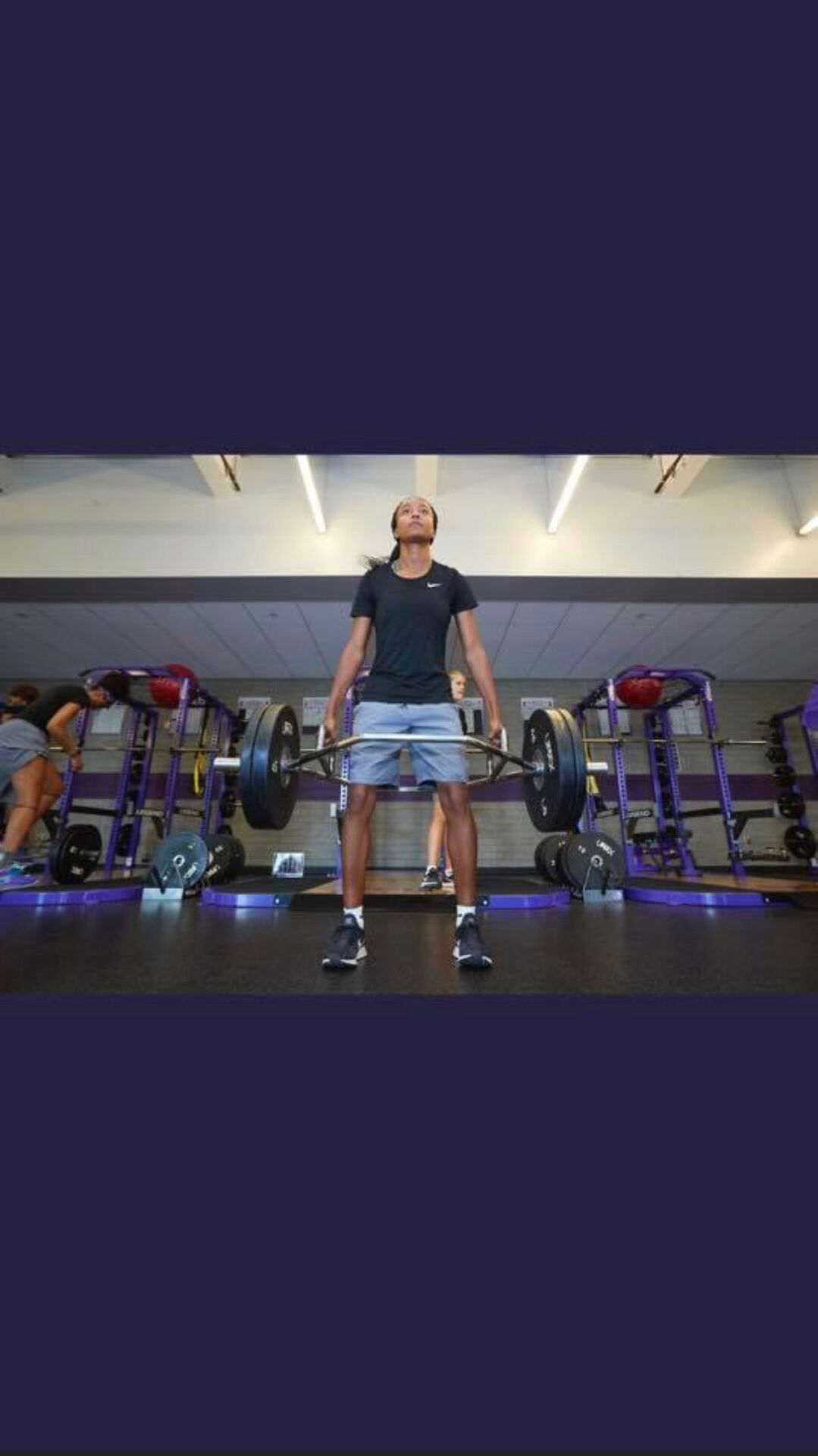 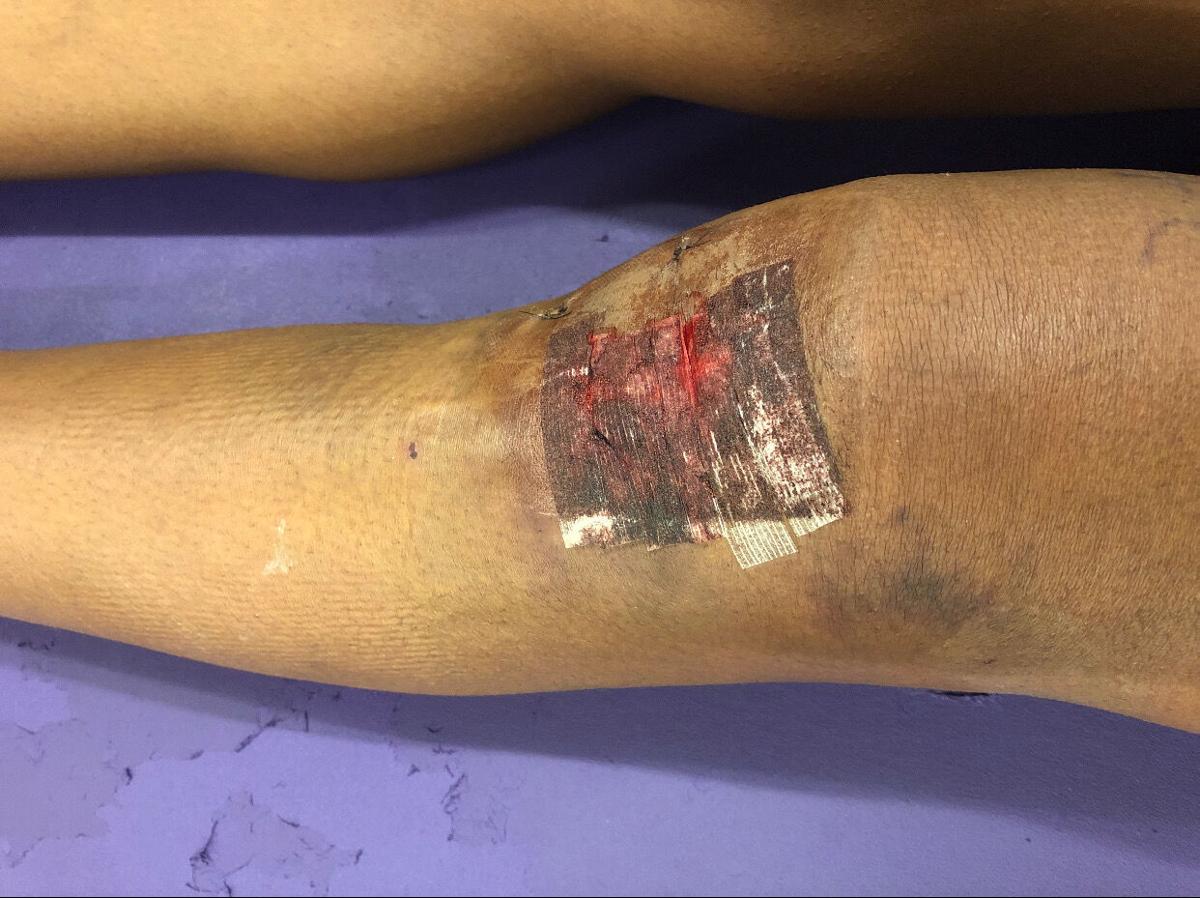 Former BHS girls basketball star Taylor Caldwell following surgery to repair a torn ACL in her left knee in November. She is a redshirt sophomore at Grand Canyon. 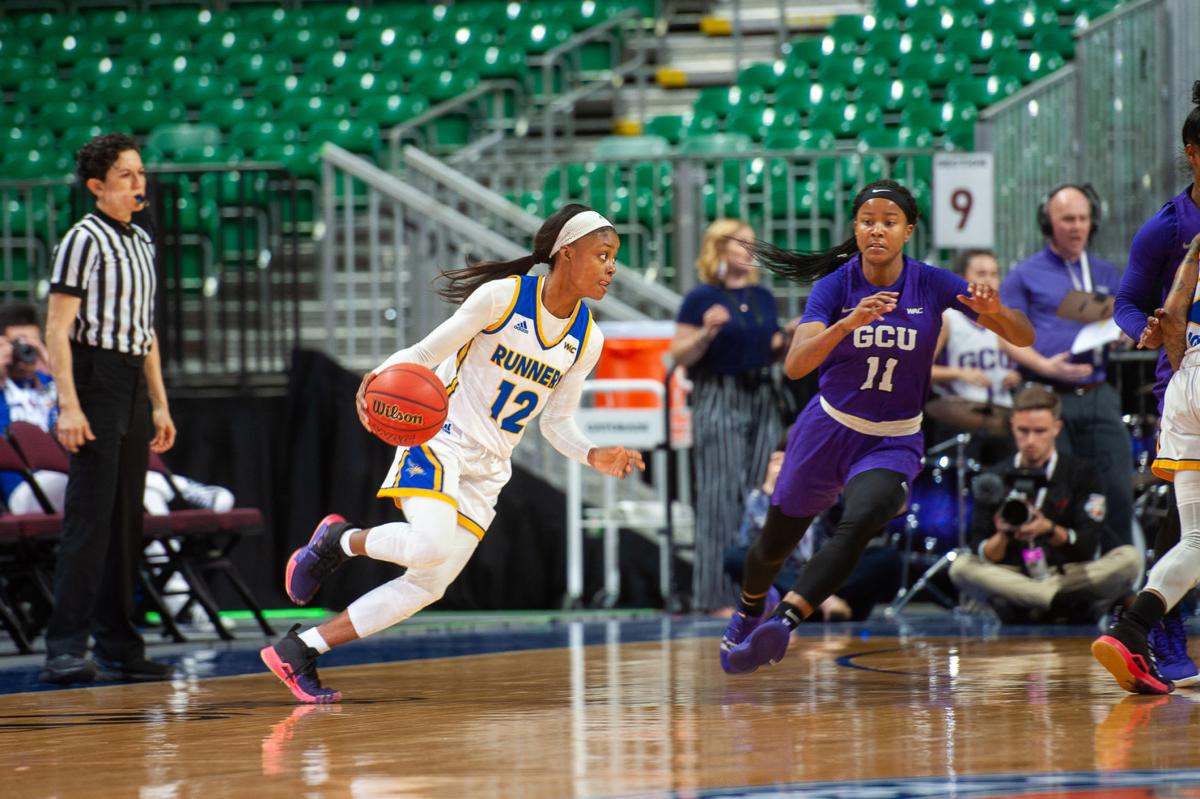 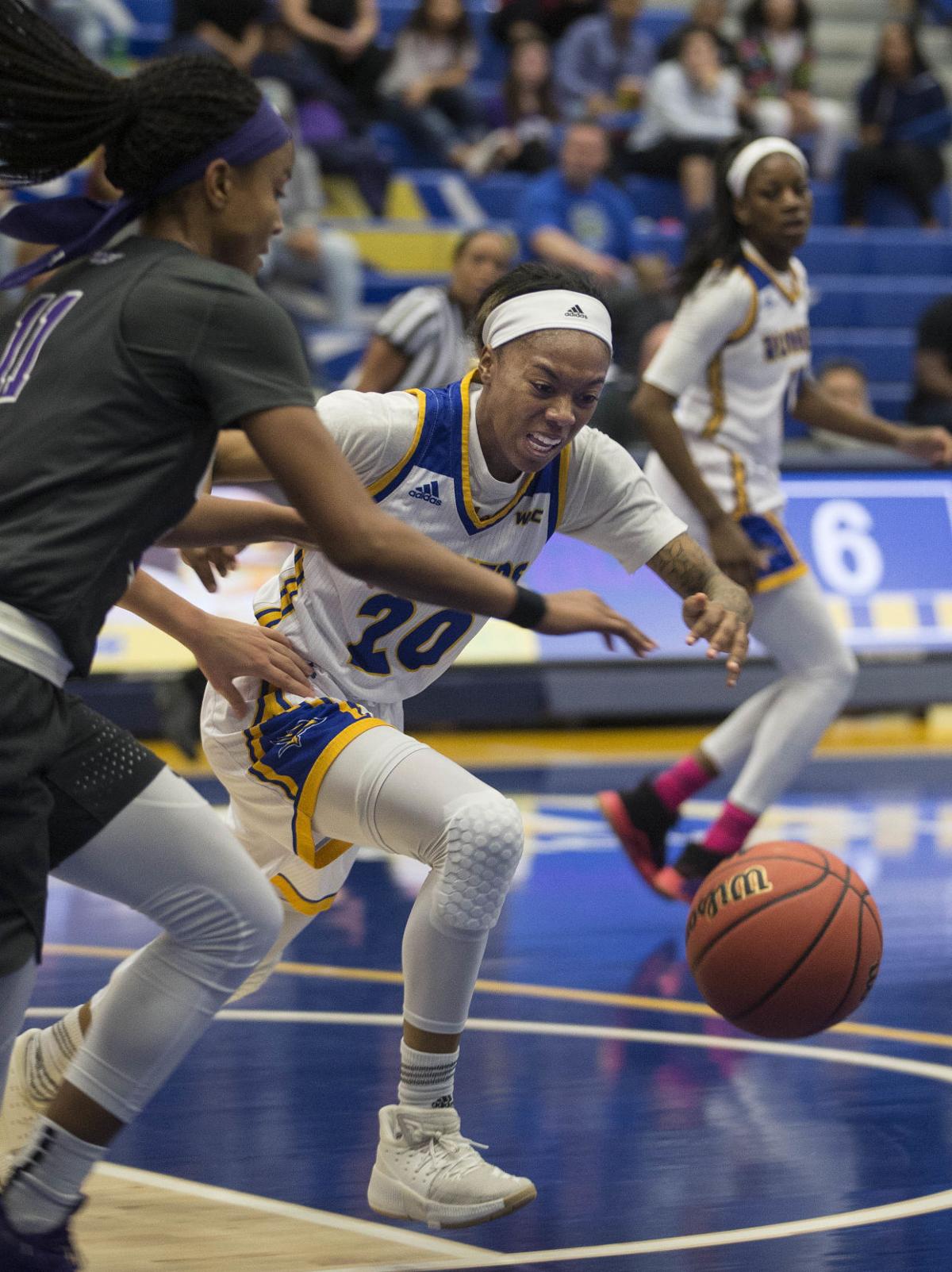 CSUB's JJ Johnson and GCU's Taylor Caldwell chase after a loose ball during a game March 2. 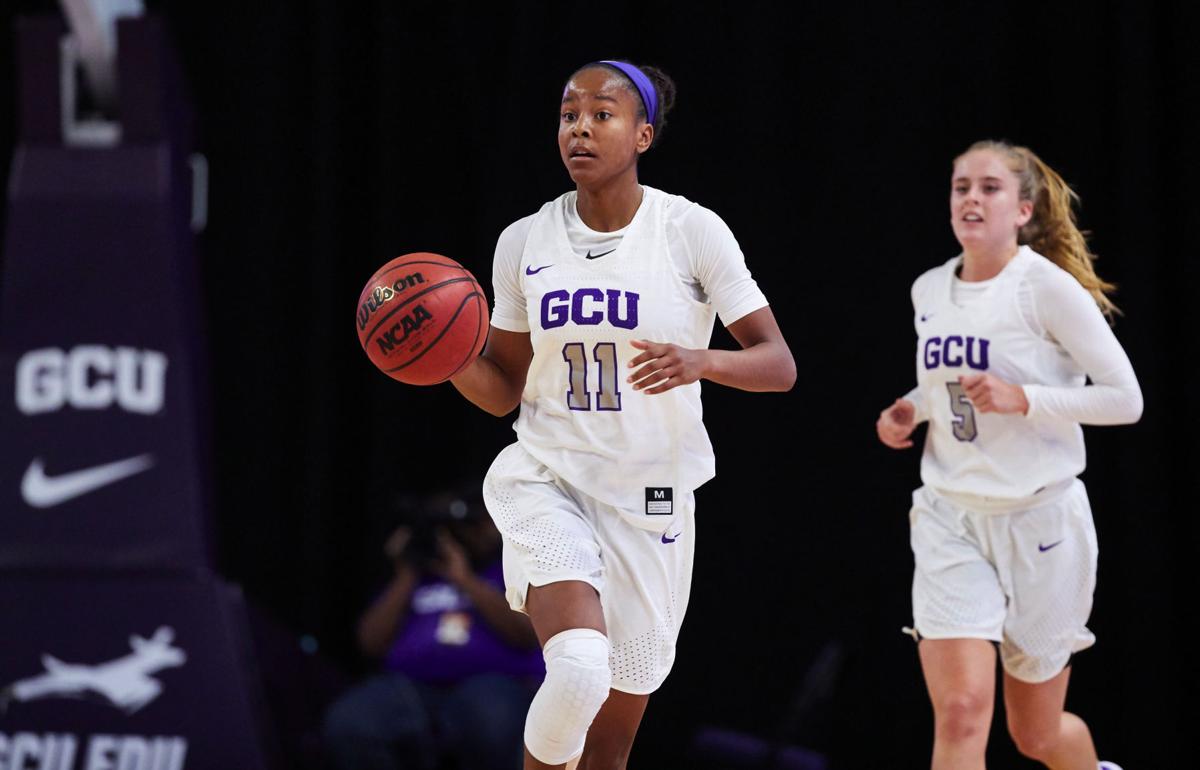 Taylor Caldwell has shown an ability to take over games at times during her freshman season, Grand Canyon head coach Nicole Powell said. 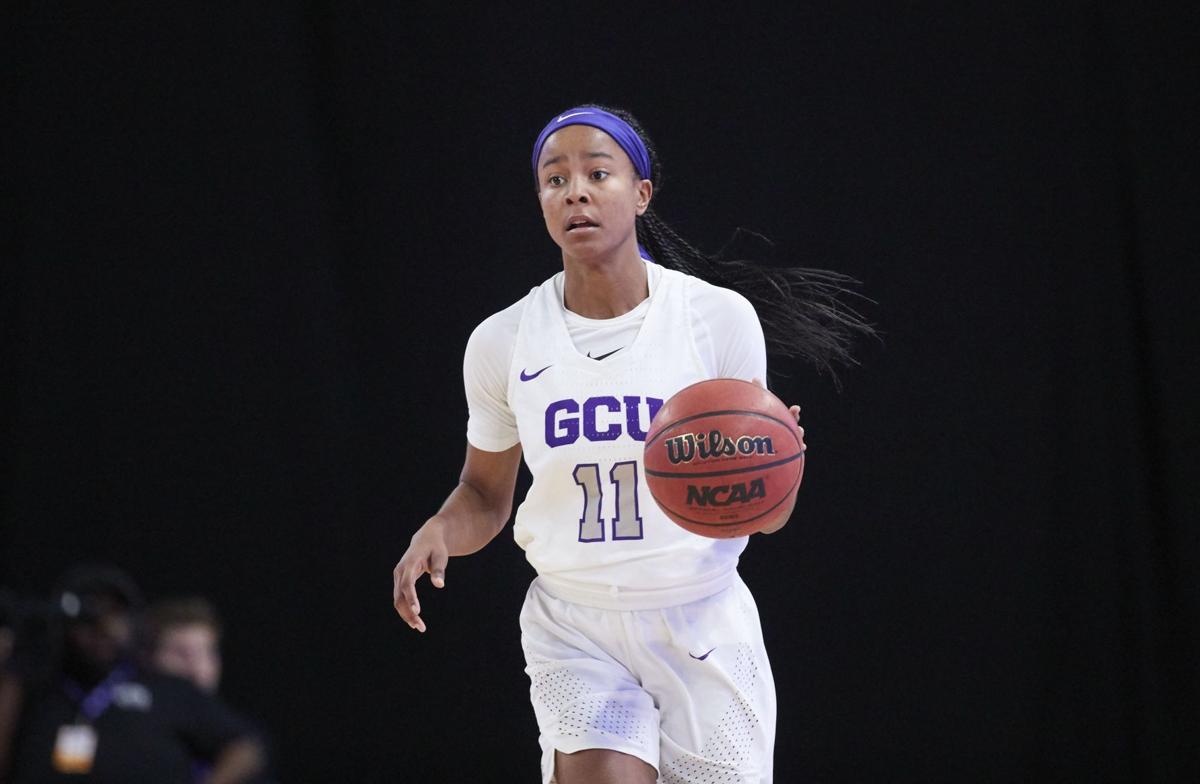 Bakersfield High graduate Taylor Caldwell is "defending at an elite level" in her freshman season at Grand Canyon, according to Lopes head coach Nicole Powell. 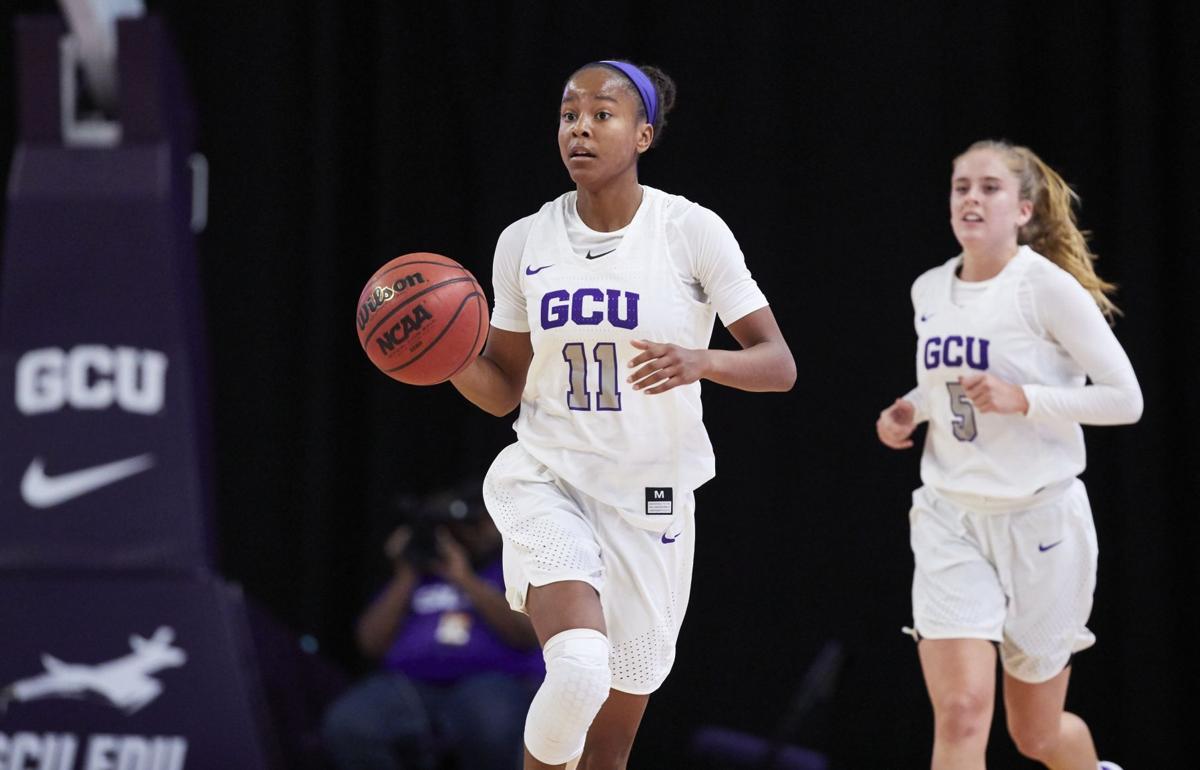 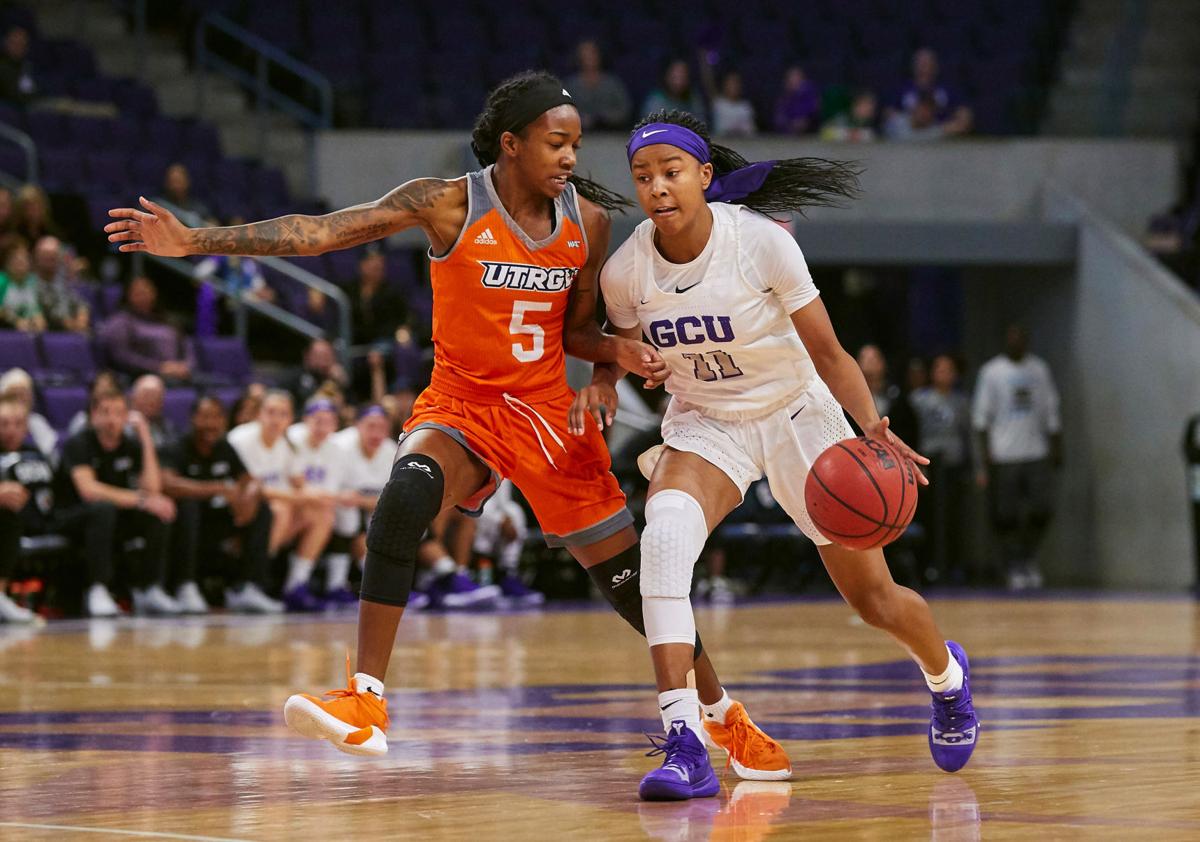 Grand Canyon freshman and Bakersfield native Taylor Caldwell has made 13 straight starts. She's second on the team with 31.6 minutes per game. 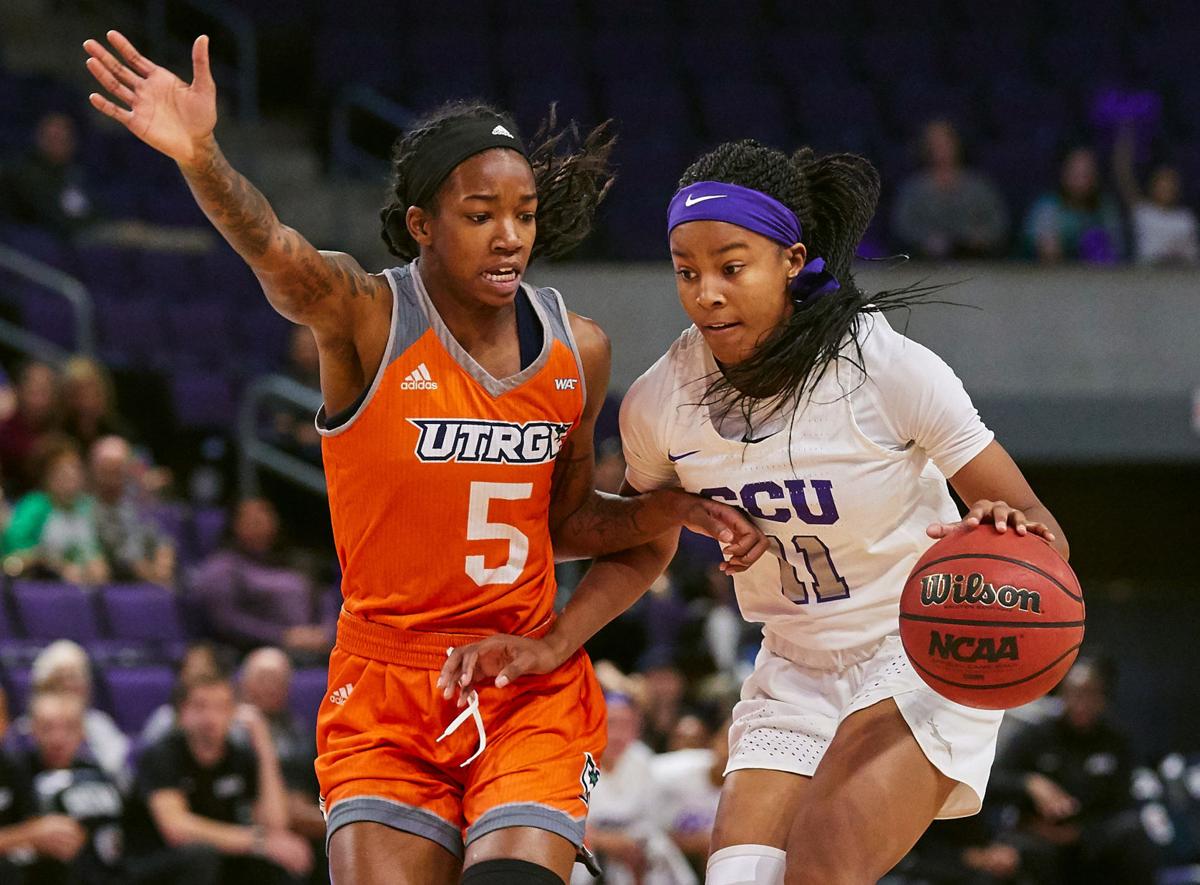 Bakersfield High graduate Taylor Caldwell has seen her role continue to grow in her first year at Grand Canyon. 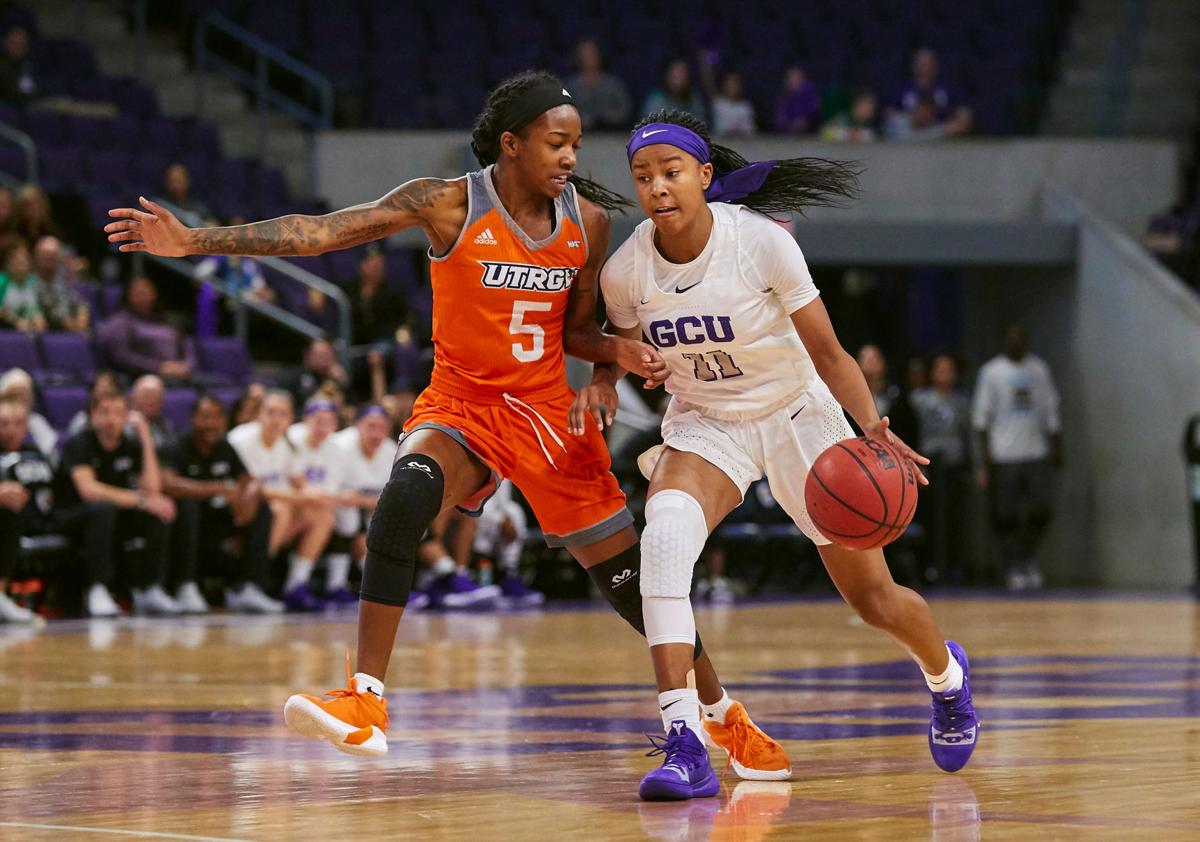 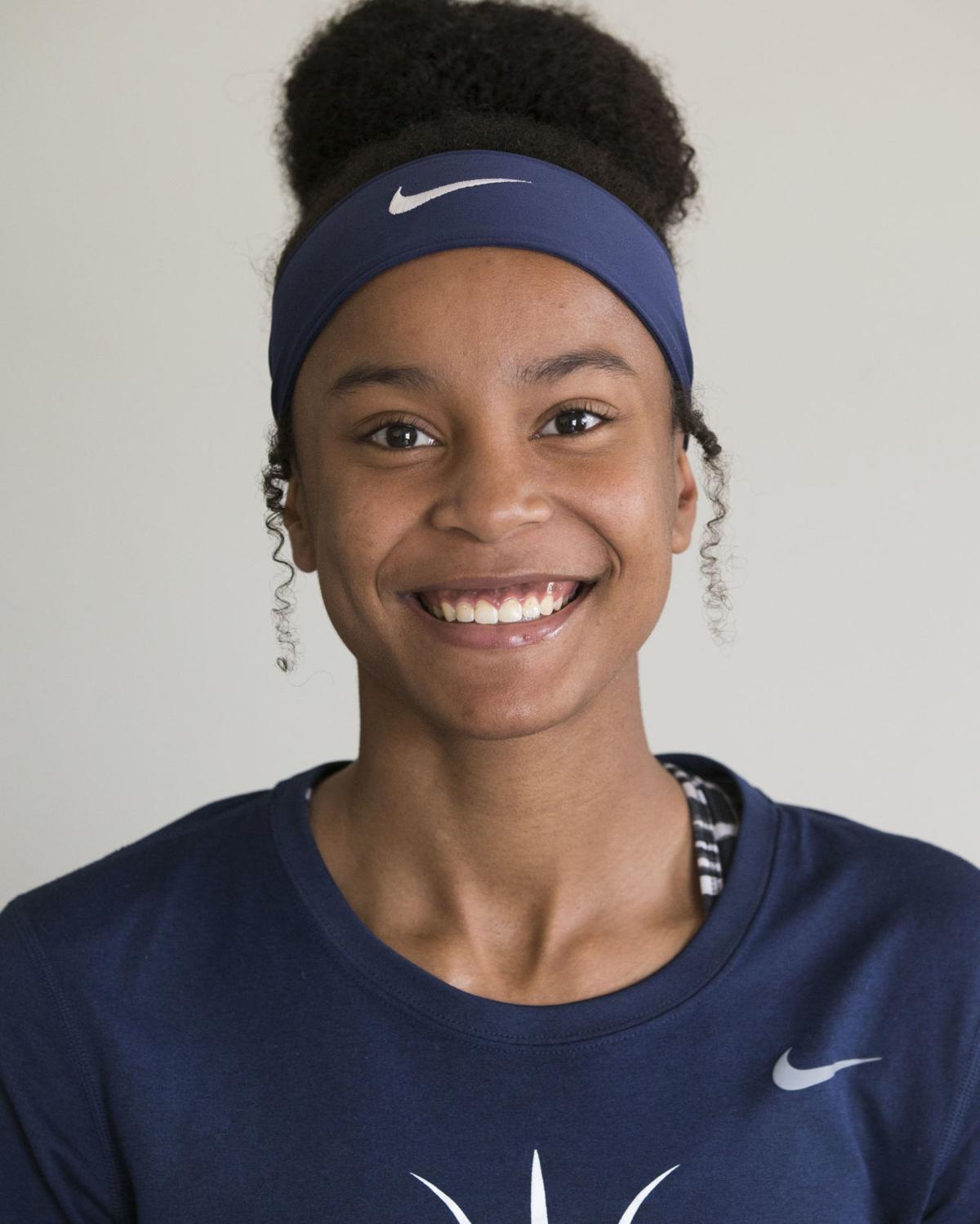 Former Bakersfield High star Taylor Caldwell, right, moves the ball up the floor against Rio Grande Valley in a game in 2019. Caldwell, a redshirt sophomore at Grand Canyon, is looking to return from a torn ACL, suffered a week before the start of the 2019-20 season.

Former BHS girls basketball star Taylor Caldwell following surgery to repair a torn ACL in her left knee in November. She is a redshirt sophomore at Grand Canyon.

CSUB's JJ Johnson and GCU's Taylor Caldwell chase after a loose ball during a game March 2.

Taylor Caldwell has shown an ability to take over games at times during her freshman season, Grand Canyon head coach Nicole Powell said.

Bakersfield High graduate Taylor Caldwell is "defending at an elite level" in her freshman season at Grand Canyon, according to Lopes head coach Nicole Powell.

Grand Canyon freshman and Bakersfield native Taylor Caldwell has made 13 straight starts. She's second on the team with 31.6 minutes per game.

Bakersfield High graduate Taylor Caldwell has seen her role continue to grow in her first year at Grand Canyon.

Injuries are nothing new to Taylor Caldwell.

From the time she was an infant, the former Bakersfield High girls basketball standout has had her share of bumps and bruises.

When she was barely a year old, she broke a bone in her foot when she took a tumble climbing out of her bed. Her misfortune continued as a teenager when she injured her ankle and was forced to miss half of her senior season.

As it turns out, it all served as preparation for perhaps the most devastating injury of all, a torn Anterior Cruciate Ligament (ACL) in her left knee, suffered in practice just one week before the start of her sophomore season at Grand Canyon University.

“I never really knew the specifics to the road to recovery for an ACL, I just knew it was like nine months,” said Caldwell. “So when I heard the news, I was in shock. For like a week I couldn’t believe that I actually tore my ACL, because it was always a fear of mine, but I never thought it would actually ever happen to me.”

Now nearly eight months into her rehabilitation, Caldwell is beginning to see the light at the end of the tunnel. From walking with the aid of crutches and a bulky knee brace, she has progressed to where she is working on fine-tuning the skills she demonstrated in leading the Drillers to the 2018 Central Section Division II girls basketball championship during her senior year.

"I’m probably at about 80 to 85 percent right now,” said Caldwell, who averaged 13.3 points, 7.7 rebounds, 5.7 assists, 5.3 steals and 2.1 blocks per game after returning from her senior year injury. “I definitely want to take my time and be patient with it because girls are six times more likely to tear their ACL, and they even have a greater risk to re-tear or tear the ACL in their other leg. So that’s always in the back of my mind, to make sure I’m patient with it and really have my strength up and movement patterns right where I can decrease that risk as much as I can.”

There wasn't really anything special about the play. Caldwell was heading toward the basket as part of a 2-on-2 practice in late October. It was something she had done countless times before. It was almost instinctual as she hopped to slow her momentum from the left side of the basket.

That’s when it happened.

“It was kind of like a freak incident,” Caldwell recalled. “As I made my move, I kind of got pushed from behind, but there wasn’t really a lot of contact, and I just went down. I went down immediately. I heard two pops and that’s all I remember. I felt pain immediately. And all I remember was my trainer and my coach running over.”

At first, the injury wasn’t something Caldwell could face.

“I knew in the back of my head that it was an ACL injury so I was scared to even open my eyes and actually come back to reality, sort of,” Caldwell said. “When I finally calmed down and got up and walked it off … I didn’t know that it was normal for people to walk after tearing their ACL, so I didn’t really think about my ACL anymore.”

But things came crashing home when the results of an MRI came back. It was a complete tear of the ACL, which meant at the very least, she’d miss the upcoming season.

“When it happened, we all felt it, we all felt that pain,” said Monique Johnson, Caldwell’s mother. “We’re a family that is so into sports and we felt bad, we felt sorry because it was a setback because of how far she has come and how hard she has worked.

“Taylor has played basketball since she was 4 and to see her work so hard it was devastating. It just seems like as soon as she takes off, there’s always something that happens to slow her down. And she’s so sweet and she doesn’t speak on a lot of stuff. I just felt her pain inside.”

Caldwell had surgery to repair the ligament in her knee the Friday before Thanksgiving, which was followed by a grueling schedule of physical therapy that pushed her mental toughness to the brink.

“I went through an emotional stage, a depression you might call it,” said Caldwell, who started 18 games as a freshman for the Antelopes, averaging 6.4 points, 3.5 rebounds, 3.3 assists and 1.2 steals per game. “I was really down about it for a couple of weeks. I really just wanted to be in my own head to process it. I’d never not been able to play basketball or move the way I wanted to. I could always move freely, but tearing my ACL … it happened in a split second and I couldn’t run or jump, or even walk well anymore. So I was really down about it for a while.”

It’s a time that Johnson remembers well. She took her first-ever flight to Phoenix to be with her daughter for her surgery.

“She gets depressed, but she doesn’t really speak about it,” Johnson said. “I have to tell her to be honest and tell me how you feel.”

She also shared a story about her nephew — Caldwell’s cousin — Tyrone Wallace, a three-year NBA player.

During his senior year at Cal, Wallace broke his hand the day before the Golden Bears were scheduled to play in the NCAA Tournament. Despite the injury, he was selected by the Utah Jazz in the second round of the 2016 NBA Draft and eventually worked his way onto an NBA roster the following year.

“I had a very down spell for a few weeks after my ACL tear, and still do here and there along the process,” Caldwell said. I still got a little down about it because I would be making progress, but I still wouldn’t be able to move like I want to. Even now, I’m still building it up so I still have those little slips and bumps. But I realized I had to get my mind right because I had to rehab hard and attack it hard.”

Caldwell has also received plenty of support from her former high school coach Rashaan Shehee, who has served as a father-figure along the way.

“When Taylor first went down with the injury, I knew it was going to be a tough road because I’ve been through several injuries myself,” said Shehee, a former NFL player who has guided BHS to three straight Central Section girls basketball titles. “And it’s not the physical aspect of it, it’s the mental part of it. I know she’s a strong person, but I knew this would really test her. I told her that and we had a bunch of cry sessions to get back to where she is now.

“I’m proud of her. I knew she would fight her way through it, and that’s what she’s doing right now. She’s battled. I told her, ‘you’re going to hit an all-time low,’ when you’re going to question whether you still want to play anymore. And she did. She questioned everything. She hit that all-time low, and now she’s bounced back and I’m excited to see her get back on the court.”

Prior to her injury, Caldwell felt as if she was in the best shape of her life and was looking forward to what she called “a breakout season.”

“I trained hard during the offseason to get my body right, get in good running shape and was able to build muscle and put weight on,” Caldwell said. “I was really working on my off-ball skills. Coming off screens and shooting, shooting off the pick-and-roll. I was really working a lot on those skills with my coaches. I felt confident and my coaches had confidence in me. I felt like I was going to have a really good, breakout season as a sophomore.

“But this was definitely a setback and it was definitely frustrating, especially after being in the type of shape that I was in and just losing that after surgery was mind-blowing to me.”

With the season still several months away, Caldwell is more at peace with the injury and is now focused on the better days ahead.

“The main focus is being on my own timeline to where I finally have equal strength on both legs and when I’m comfortable to get back into things,” Caldwell said. “So there’s not really a set time. I want to make sure I’m at least 95 percent before I start getting into more physical contact in the sport.

“With the season getting pushed back it's giving me more time to build strength up and get more comfortable. I’m not going to rush things, but I can see I’m getting closer, so I’m excited about getting a chance to show what I can do.”