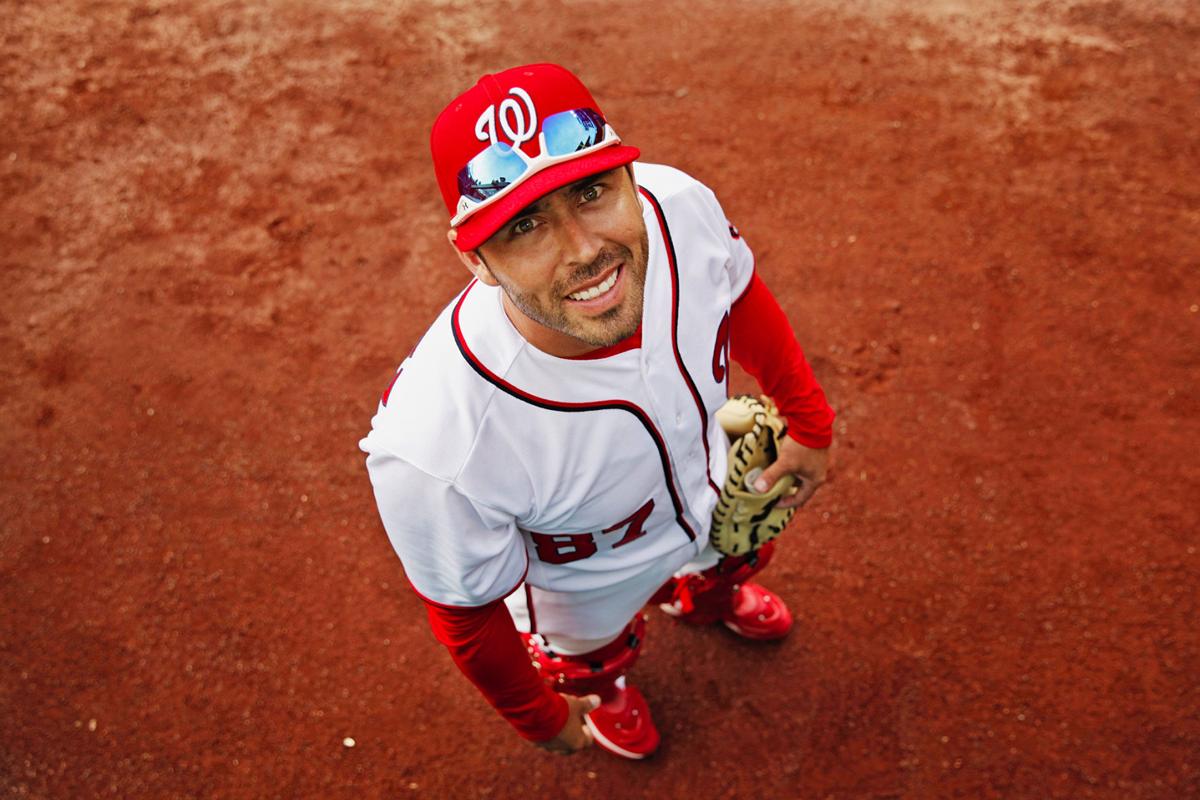 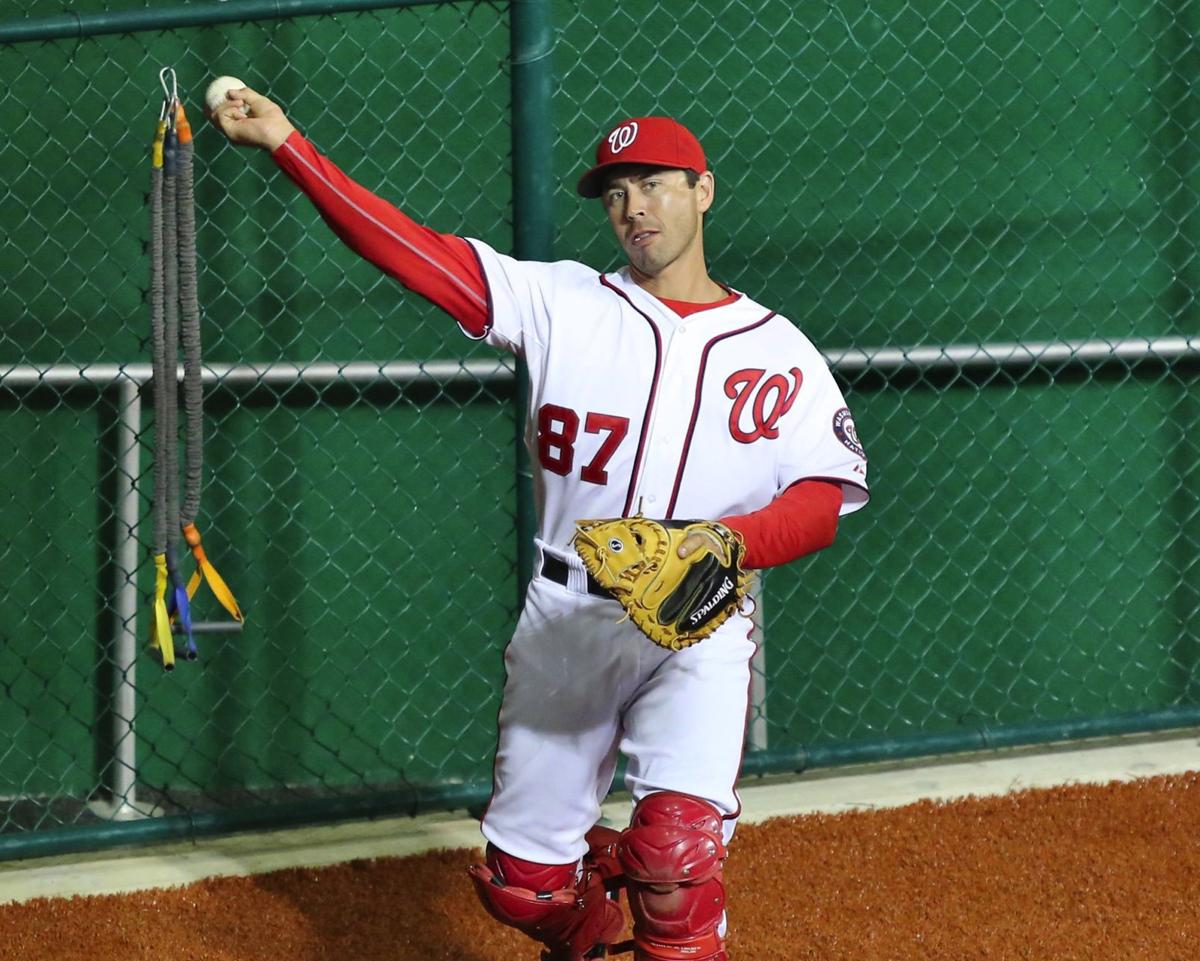 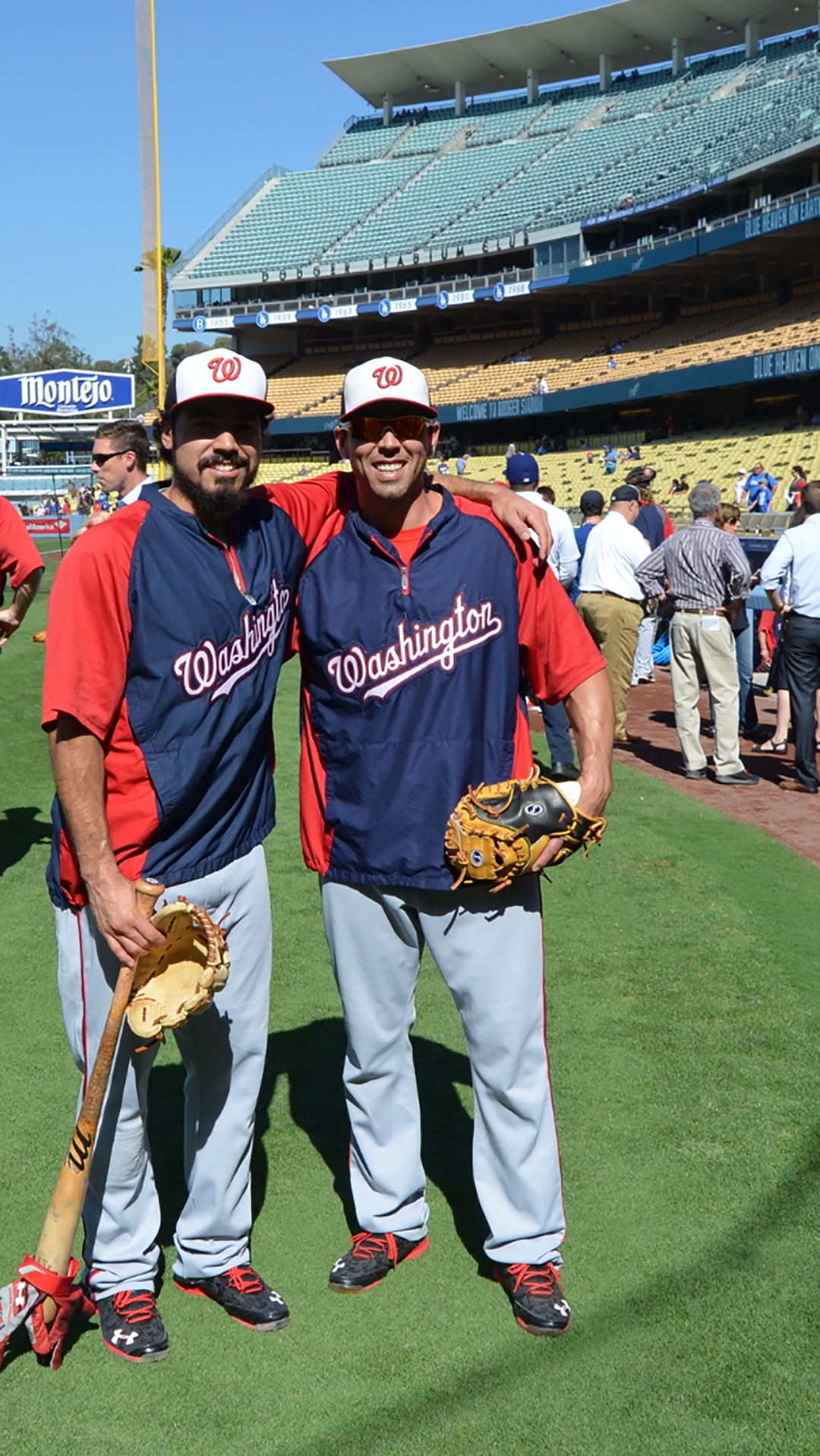 Former Bakersfield College catcher Octavio Martinez poses with All-Star third baseman Anthony Rendon. Martinez is in the World Series as a bullpen catcher and Spanish-speaking interpreter for the Washington Nationals.

Former Bakersfield College catcher Octavio Martinez poses with All-Star third baseman Anthony Rendon. Martinez is in the World Series as a bullpen catcher and Spanish-speaking interpreter for the Washington Nationals.

When local viewers tune in for the World Series this weekend, the focus will undoubtedly be on superstar athletes such as Juan Soto, Anthony Rendon, Zack Greinke and Jose Altuve.

But if you look really carefully, you might catch a glimpse of former Bakersfield College standout Octavio Martinez, whose World Series contributions will come just off stage as the Nationals’ bullpen catcher and the team’s Spanish interpreter.

Washington looks to be in the spotlight once again today, when the Nationals return home to host the Houston Astros in Game 3 of the World Series. Washington opened some eyes at the outset, winning the first two games on the road to take a 2-0 lead in the best-of-seven championship series.

“I obviously never got to the big leagues and was never able to play in one, but just to go through the experience as part of the staff and living this moment right now is incredible,” said Martinez, whose official title is field staff coordinator and team interpreter. “As a player you dream of this. That’s the whole goal starting in spring training. To be here right now and to have the opportunity to do so is just amazing.”

Martinez arrived in Houston with his Washington teammates on Monday, and immediately went to Minute Maid Park for media sessions, followed by a short workout.

It was a familiar routine for Martinez, but at a much larger scale. He typically helps interpret during interviews with the team’s Spanish-speaking players, primarily outfielders Soto and Victor Robles.

On Monday, leading up to Game 1 of the World Series, he was assigned to assist only Robles because of the increased media attention. After helping with a few interviews, Martinez shifted his attention to the field, more specifically the bullpen, where he has worked with Washington’s pitching staff the past seven years.

“It’s just typical bullpen duties, prepping the pitching staff for the games, making sure they get loose …” Martinez said. “You just need to be insightful with any questions they have for me, whether it’s the coaches or the players themselves. You feed them any information you can offer them. You don’t necessarily deal with their mechanics, but you should notice certain things as a catcher that you can give as feedback.

“You definitely notice the differences. You know their routine, how they warm up. Some guys start slow and then they’re letting it fly by the end of their warmups. In those moments you can tell if they’re feeling good just by how their ball is moving or not moving. They are very receptive of all that information, and it lets them know they that can’t necessarily attack the hitters the same way because their pitches aren’t doing exactly what they normally do. So they have to get creative sometimes.”

That same creativity is something that enabled Martinez to remain in professional baseball long after his playing days ended.

After an impressive career as a catcher at Bakersfield College, where he caught future Major League pitcher Colby Lewis, Martinez was drafted by the Baltimore Orioles in the 10th round of the 1999 MLB Draft. It was the start of a 14-year professional career that peaked with a handful of games in Triple-A with the Orioles and Dodgers.

Martinez’s journey as a player ended in 2012 following his fifth season of independent baseball, but as it turns out, his ticket to the major leagues was just getting started. His reputation as a hard worker led to him being offered a position with the Nationals by Bryan Minniti, the team’s assistant general manager at the time.

“This job kind of landed on my lap unexpectedly,” Martinez said. “And I appreciate the organization for the opportunity to be part of the team. And at the end of the day, we all love this sport. And this is the peak of our sport. This is what you shoot for whether you’re a player, in the front office, a coach or whatever point of your career you’re at. The main goal is to win the World Series with your team.”

Making it to the World Series didn’t appear to be in the plans for the Nationals, who lost All-Star outfielder Bryce Harper to the Philadelphia Phillies in the offseason. The team was just 19-31 on May 23, the second worst record in the National League.

But Washington turned things around, posting a 72-38 record over the next 110 games to earn a wild-card spot. Trailing 3-1 in the eighth inning of that single-elimination game against the Milwaukee Brewers, the Nationals rallied for four runs to advance.

In the National League Division Series, Washington trailed 3-1 to the Dodgers in a decisive Game 5 and rallied to win 7-3 on Howie Kendrick’s grand slam in the 10th inning. The Nationals then swept the Cardinals to reach their first World Series.

“It seems like even from the beginning of the season we’ve been the underdog,” Martinez said. “We weren’t the favorites to win the division, and then how it started … but the team itself, the players, never lost faith. They are very professional, they went about their business and you know what, a couple of big weeks can turn things around.

“It’s almost like no one expected us to do anything after the bad start we had, so everything has just been icing on the cake. It’s kind of like the way the players have looked at it. We don’t care what you say or what you write, because we aren’t supposed to be here anyway.”

The same could be said for Martinez, who is one of four Martinez brothers to play at BC. His younger brothers Juan and Rolando both played at Oral Roberts before signing to play in the Mexican League. His youngest, Luis, played at Cal State Bakersfield.

“It doesn’t surprise me that he’s still in the game,” said BC baseball coach Tim Painton of Octavio. “Because even as a younger player, he was somebody who had a passion for baseball. He’s very serious about the game, he was a student of the game and obviously after his playing career kind of ran out, he chose to go this path and in my opinion will probably be a baseball lifer.”

That life has led Martinez to the fringe of the national spotlight, an opportunity he intends to relish.

“It’s going to be exciting,” said Martinez, who received a congratulatory text from Lewis.

Lewis pitched in two World Series with the Texas Rangers and wanted to make sure his former BC teammate took the time to enjoy the experience.

“These moments, you don’t live them every day. And you may never live them again,” was his message to Octavio. “So you have to make sure you appreciate it.”

For about eight months a year, Octavio Martinez works in Major League Baseball. And for the other four, he’s back in Bakersfield, his hometown.

Mr. Martinez is quite humble. Seems like a great young man.