Foothill's Tyson Reynolds gets shoved out of bounds and loses his helmet by Taft's Caeden McAfee in the first quarter. 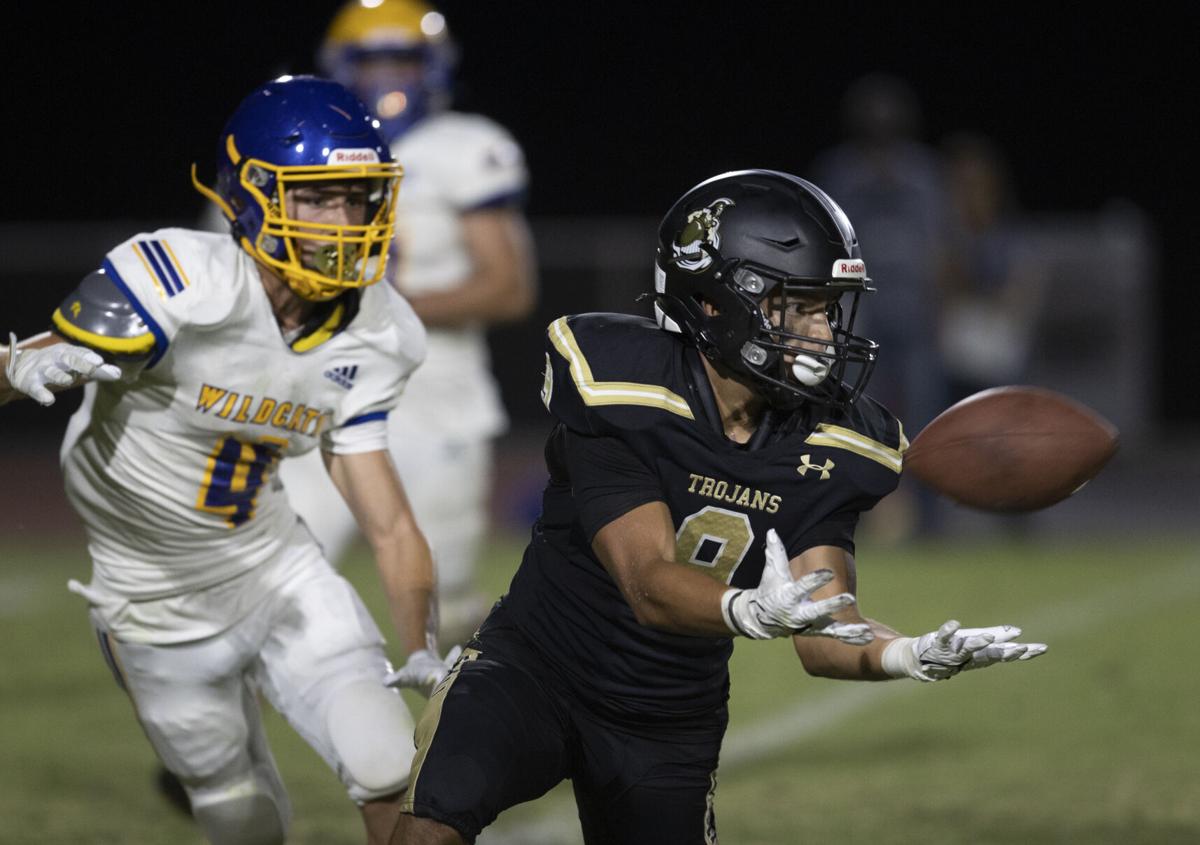 Foothill's Kevin Sandoval catches a pass for the first over Richard Rodrigues of Taft. 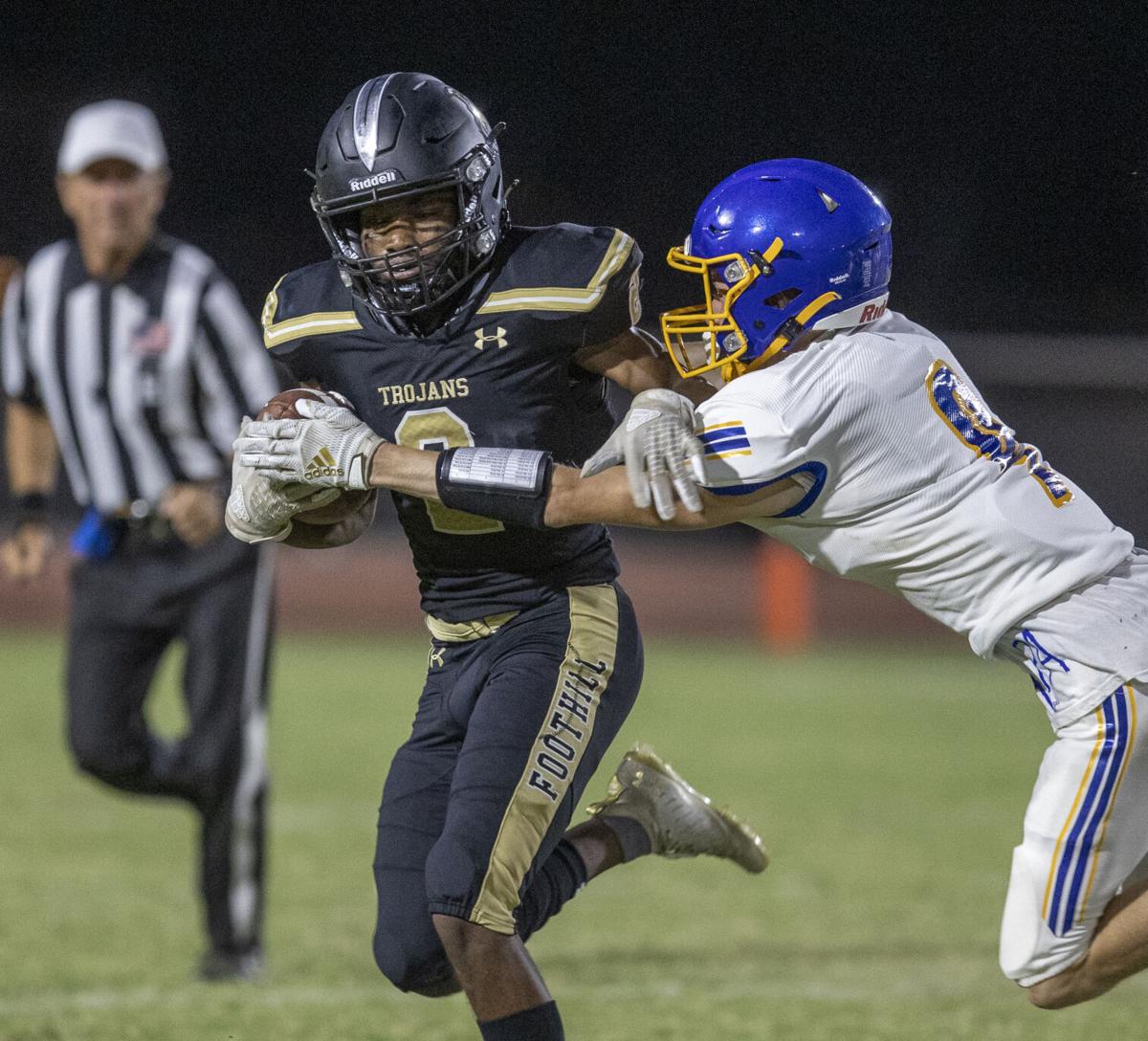 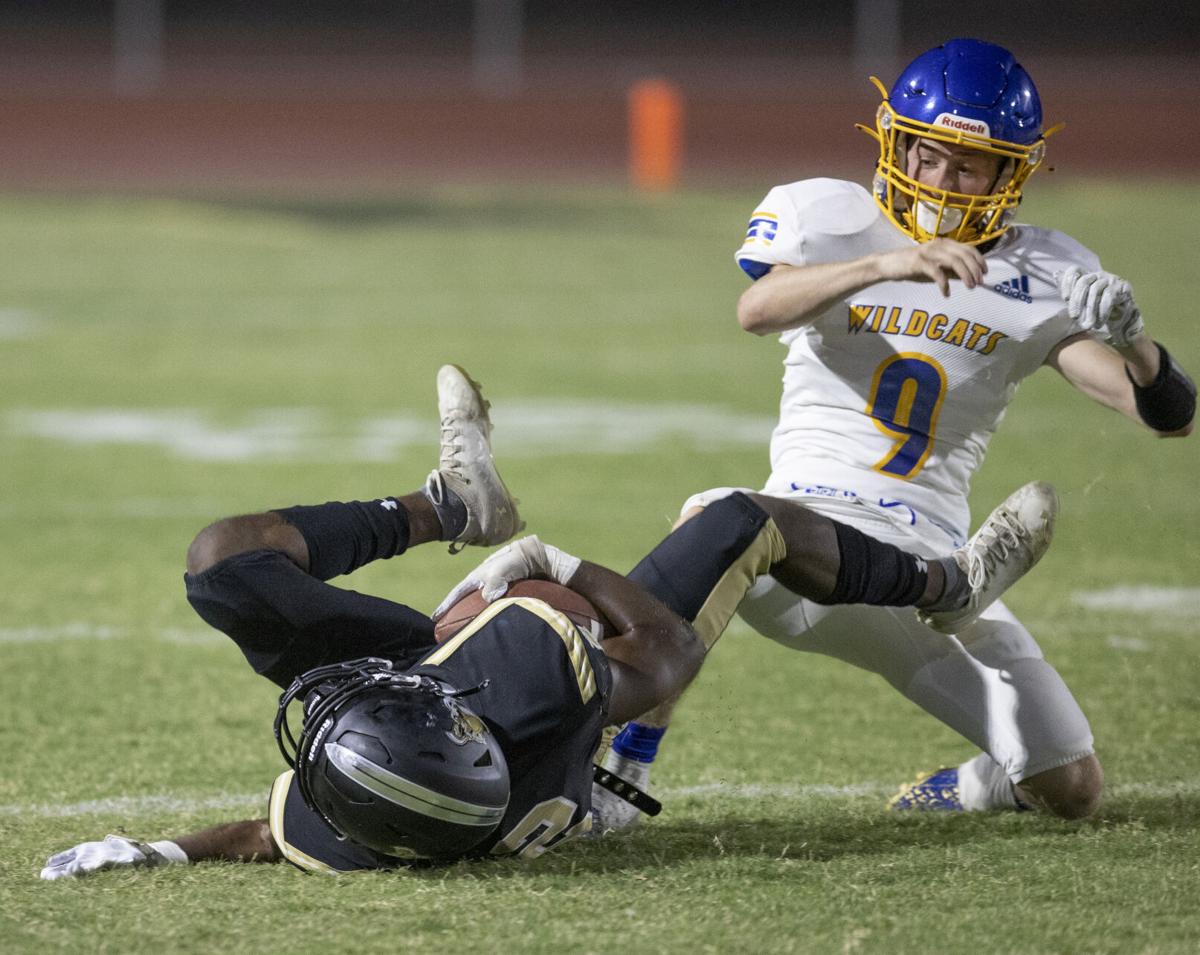 Foothill's Tyson Reynolds rolls on the ground, trying to hold onto the ball after Taft's Caeden McAfee completes the tackle. 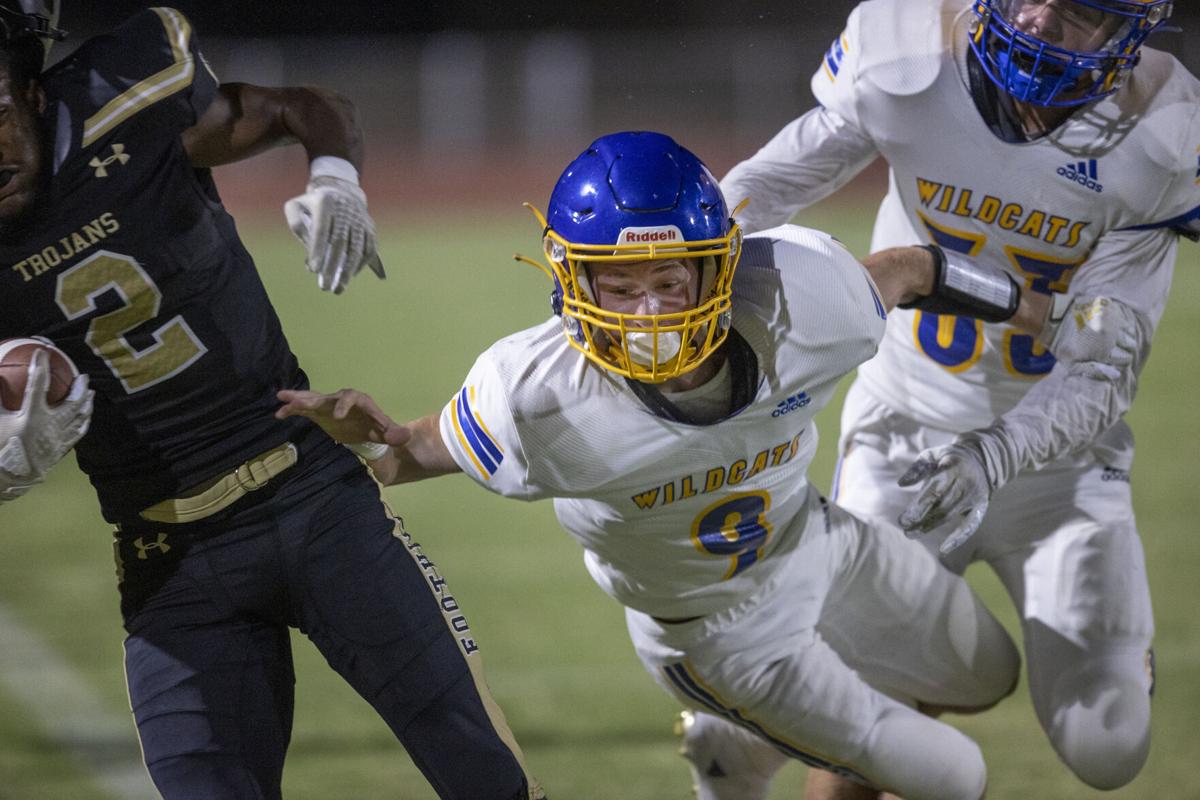 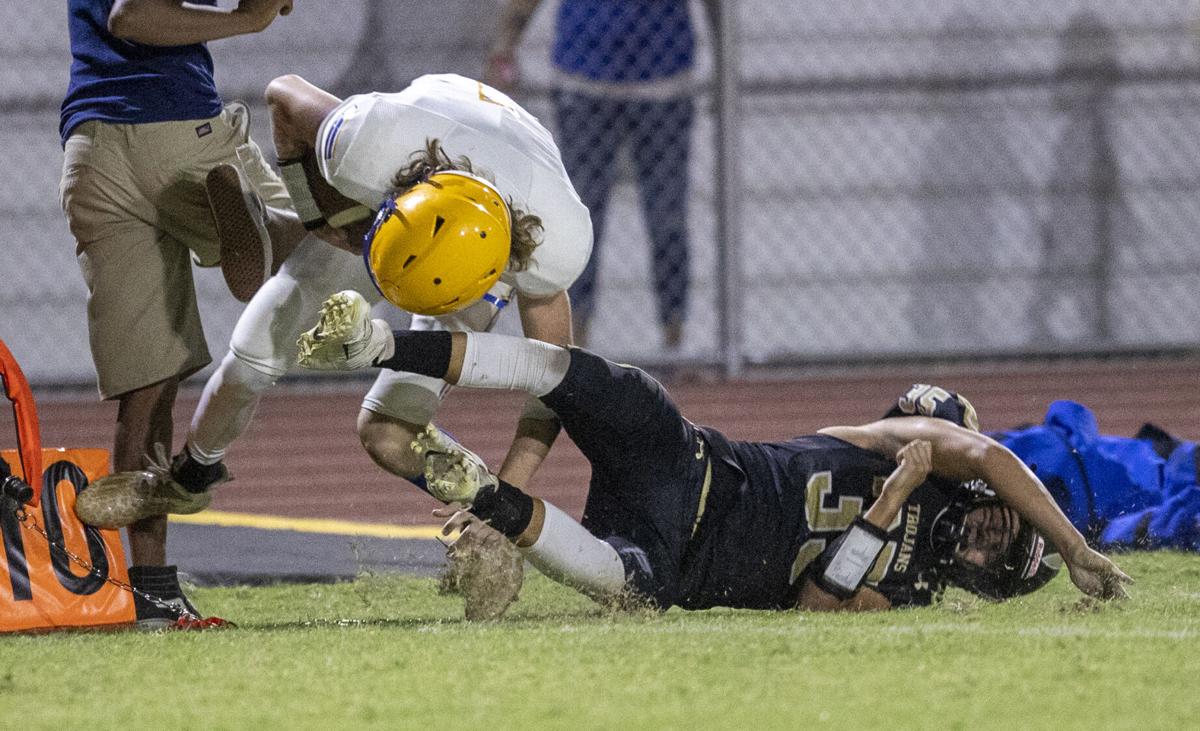 Taft's Jayce Moore looks for an opening in Foothill's defense. 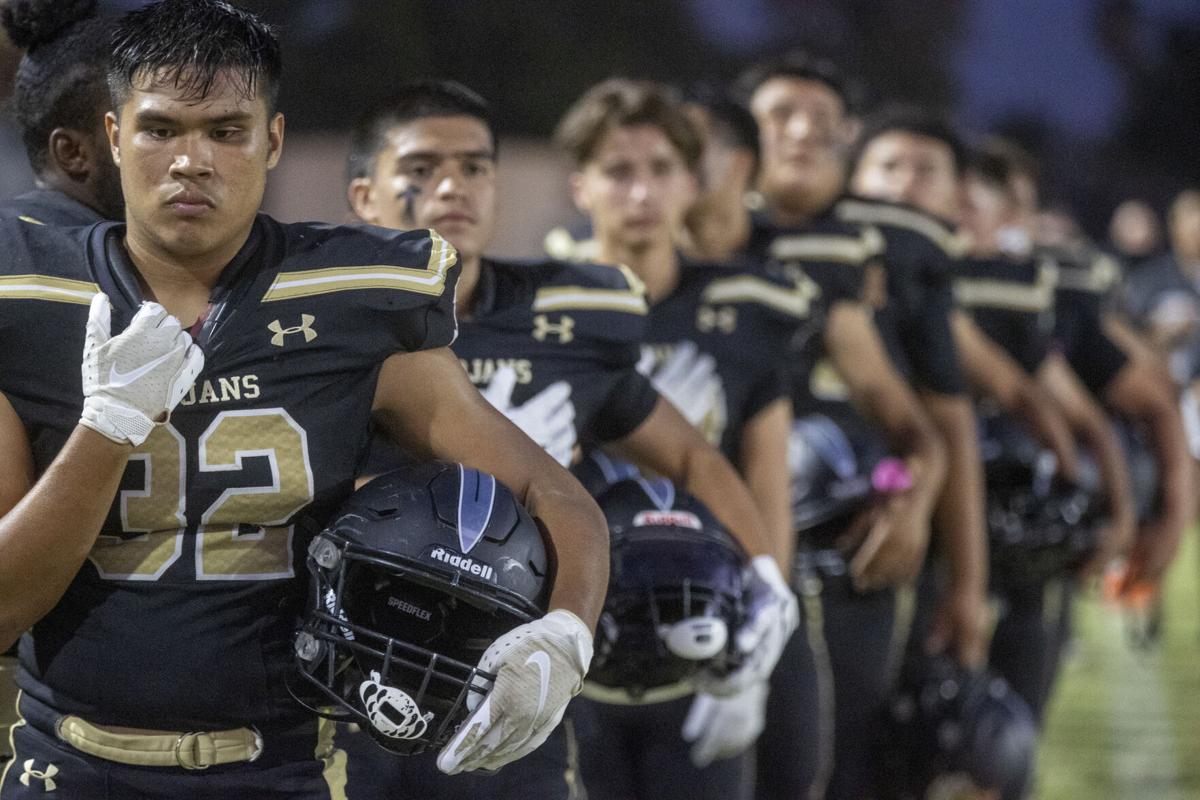 Foothill shows respect for the flag during the opening of their game against Taft. 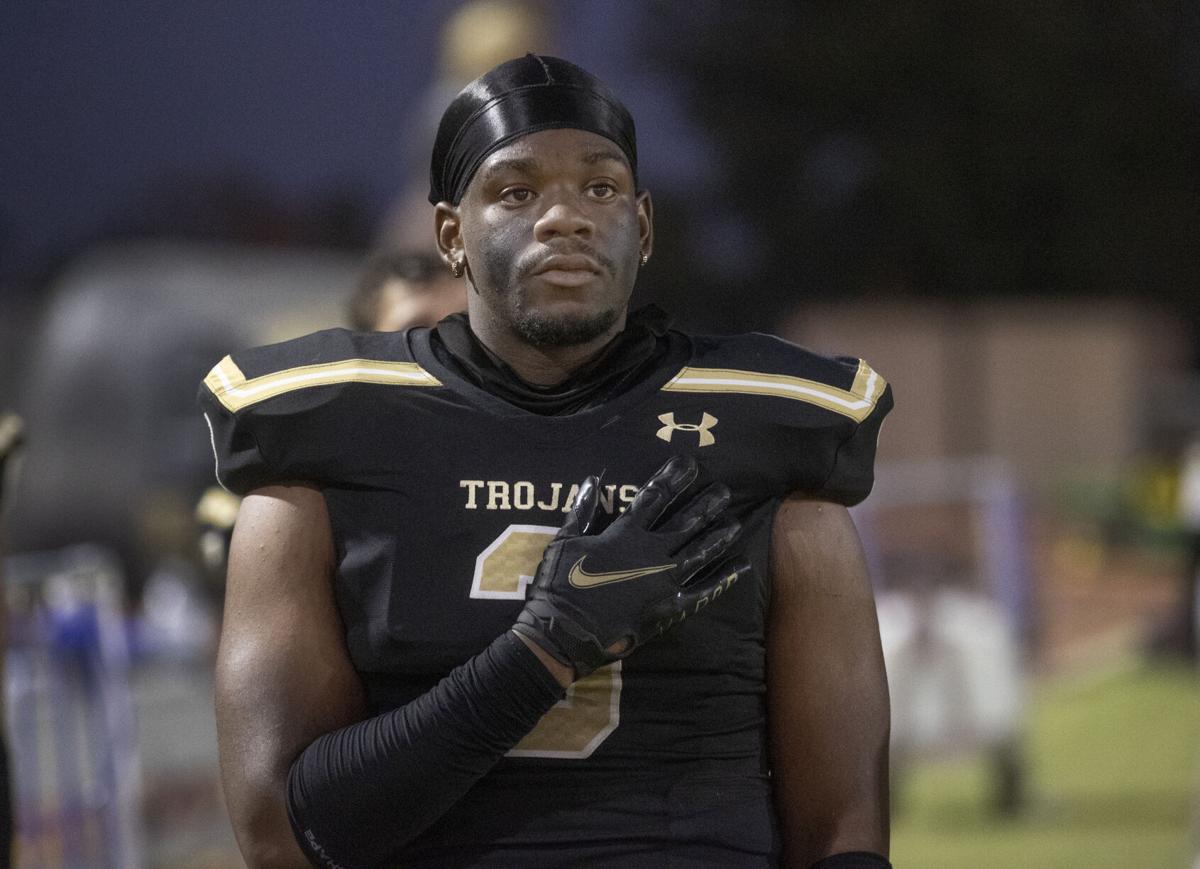 Foothil's Deloney Kaelan stands for the Colors before the start of the game against Taft.

Foothill's Tyson Reynolds gets shoved out of bounds and loses his helmet by Taft's Caeden McAfee in the first quarter.

Foothill's Kevin Sandoval catches a pass for the first over Richard Rodrigues of Taft.

Foothill's Tyson Reynolds rolls on the ground, trying to hold onto the ball after Taft's Caeden McAfee completes the tackle.

Taft's Jayce Moore looks for an opening in Foothill's defense.

Foothill shows respect for the flag during the opening of their game against Taft.

Foothil's Deloney Kaelan stands for the Colors before the start of the game against Taft.

On a night of firsts, the Foothill football team closed out a memorable night with a defensive effort that had fourth-year head coach Brandon Deckard smiling from ear to ear.

The Trojans limited visiting Taft to 80 yards from scrimmage, scored the winning points on a safety and then intercepted a pass to clinch an 8-6 victory on Friday night in the school’s first Homecoming game since completing a two-year renovation project at Ned Permenter Stadium.

“It was just a dog fight,” Deckard said. “We both went at each other, you know? It was a defensive struggle both ways. Our defense played amazing, their defense played tough. Our offense held the ball more and that was the difference there.”

With the victory, Deckard’s team improved to 3-0 for the first time since 1996 when the legendary Permenter was still walking the sidelines as the Trojans’ coach.

“This year, the kids puts in the work, put in the time, put in the effort, and it’s showing on the field,” Deckard said. “We’re doing things differently at Foothill that haven’t been done in a while. You start winning games … you saw the stands, we had a packed house. This was a great job by all the kids and all the coaches, everybody involved.”

On a night when offense was at a premium, Taft scored first — but more importantly — Foothill scored last.

With the game tied 6-6 and the Trojans driving, the Wildcats stopped Foothill on four plays inside the 10-yard line, including twice from the one yard line, to take over on downs.

Taft’s celebration proved to be short lived, however, when Foothill linebacker Andrew Rios broke through the line and stopped Wildcat running back Jason Woodards in the end zone and linebacker Antonio Salazar completed the tackle for a safety with 2:25 left in the third quarter.

“I can’t say enough about my defensive coaches,” said Deckard of defensive coordinator Mike Greg, defensive line coach Randy Maples and offensive line coach Leonard Nevils. “They put a great defensive game plan together, and you saw it work tonight. That safety gave us the go-ahead score right there. Those are big, huge plays. The defense refused to lose tonight.”

The play turned out to be the game-winner as Foothill dominated the time of possession with a steady dose of senior fullback Kaedan Deloney.

The 6-foot, 229-pounder rushed for 111 yards on 29 carries, leading the way as the Trojans gobbled up time with three long drives in the second half. Foothill ran 34 plays in the second half, while Taft had just 12 in the final 24 minutes of play.

“I’m really beat up right now, but that’s what the weekend is for, recovery and all of that,” Deloney said. “We just had a good game, we came out and we did our thing.”

Despite limited opportunities, the Wildcats had their chances to win the game. Taft opened the scoring late in the first quarter, capitalizing on good field position following a 35-yard punt return by Richard Jennings.

Four plays later, Wildcat quarterback Jayce Moore scored on a 4-yard run. Taft had to settle for a 6-0 lead, however, when a fumbled snap on the extra point resulted in a dropped pass in the end zone on a frantic attempt to salvage a two-point conversion.

Foothill responded with what it does best, eating up clock and moving the ball down the field. The Trojans moved the 75 yards on 12 plays, finishing off the final seconds of the first quarter, and eventually tying the game when Tyson Reynolds got to the outside and scored on a 7-yard run with 7:12 left in the first half.

The Trojans had another sustained drive on their first possession of the second half, but the team’s chance to take the lead fizzled at the 1-yard line following a long delay following an ankle injury to senior linebacker Bronson Ortlieb as Deloney tried to bull his way over the goal line. Ortlieb suffered a dislocated right ankle on the play, and after spending several minutes with the on-site medical staff, returned to the sideline on crutches for the remainder of the game.

Following the delay and facing a fourth-and-goal from the one, Foothill quarterback fumbled the ensuing snap, and the Wildcats took over at their own two.

Following the safety, Taft punting the ball away, but received a break when the Trojans fumbled. But the Wildcats failed to move the ball and were forced to punt, and Foothill ran off nearly nine minutes off the clock on their next possession.

With just 3:20 to play, the Wildcats took over the ball at their own 39, kneading only a field goal to go ahead. But on Taft’s first play, Moore’s pass was intercepted by the Trojans’ Elias Trevino. Two first downs later, Foothill was able to run out the clock.

“Foothill’s a good team,” Durkan said. “But we still have some questions marks. When we get in a tight battle, are we going to fold. We’re going to be in football games the rest of the year, and play teams like (unbeaten) Kennedy. They're the top team in our league. If we’re going to compete with them, we cannot do what we did tonight.”