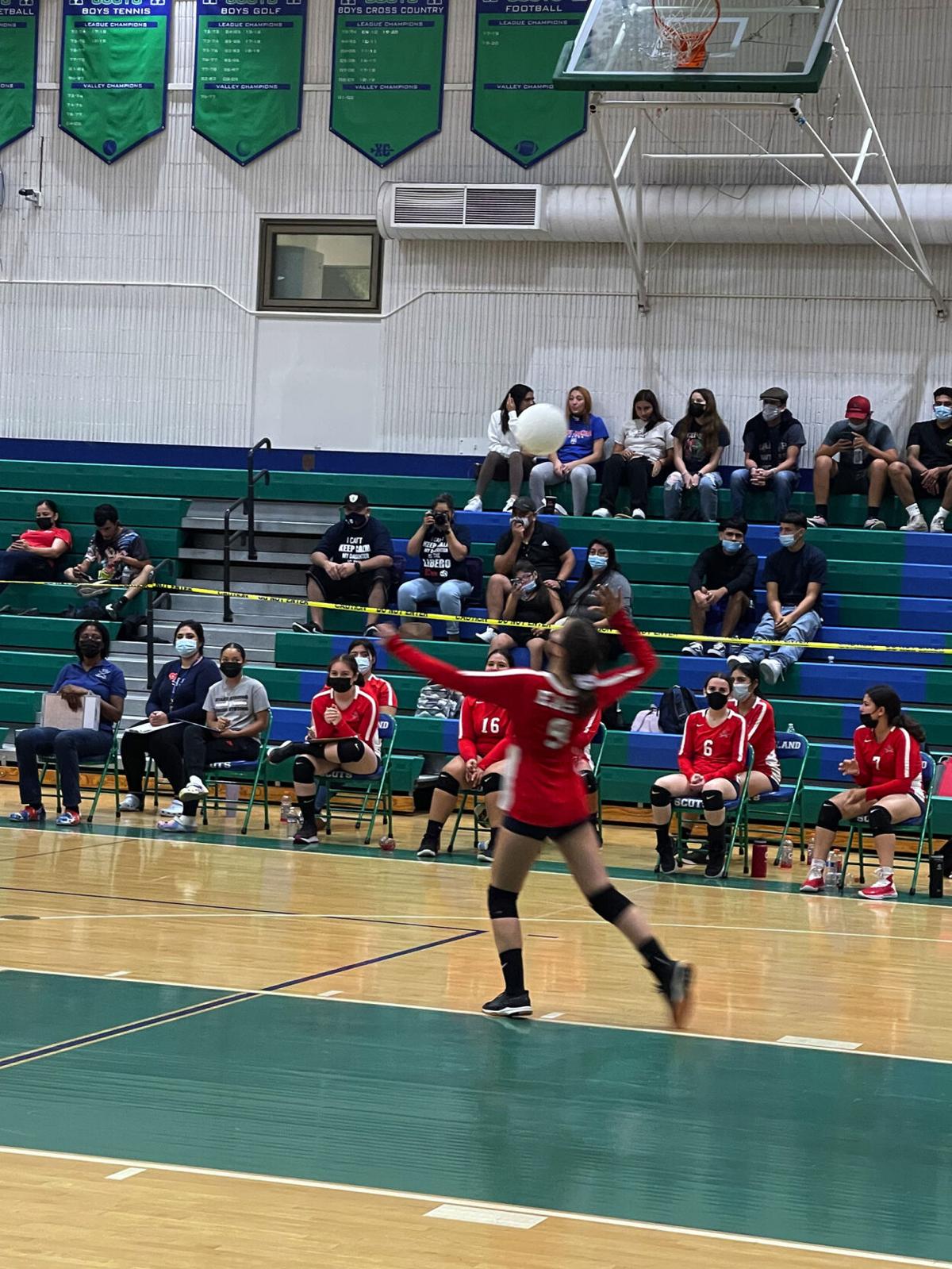 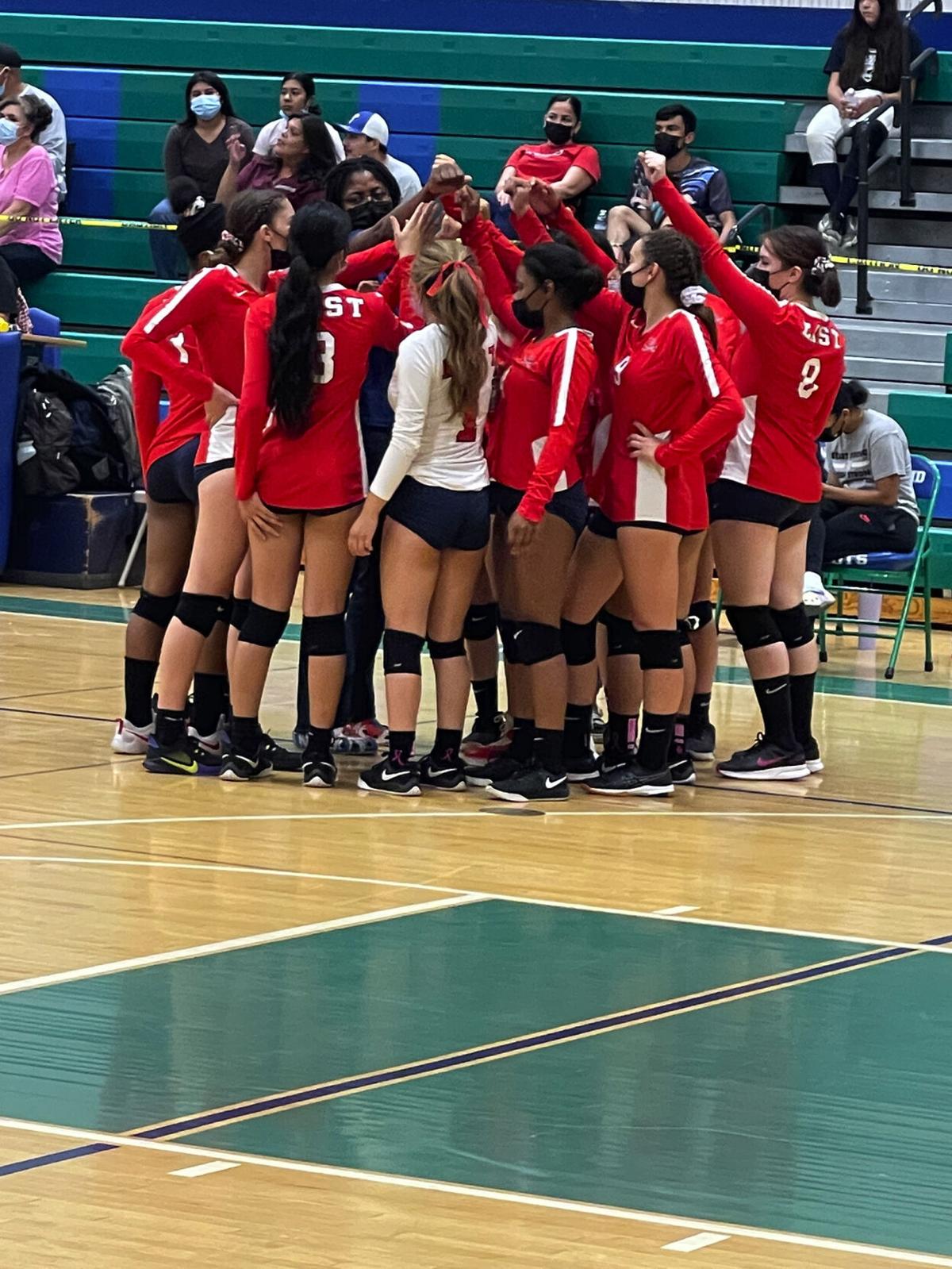 The East volleyball team talks things over during a timeout at Tuesday's SEYL match at Highland. The Blades won 3-0 to remain unbeaten in league play.

The East volleyball team talks things over during a timeout at Tuesday's SEYL match at Highland. The Blades won 3-0 to remain unbeaten in league play.

Johnitta Clemons has seen a lot in her 13 years as head volleyball coach at East High.

From the highs of reaching the Central Section Division III semifinals in 2014 to the low-point of losing 26 straight Southeast Yosemite League games between 2010-2013.

But through it all, one thing that has eluded the Blades. A league title.

“This particular group, they’re just a bunch of winners,” said Clemons, whose team improved to 17-7-1 and 4-0 in SEYL play. “They play hard, they have great attitudes. I think the catalyst for this group is they believe in themselves. They’re just happy to be here.”

That confidence was on display early and often on Tuesday, with Baameur leading the way.

The left-hander had seven kills in the third set and closed out the match with an ace and a kill.

“One thing I have to say is that it’s a lot to do with my teammates,” Baameur said. “I have my libero coming up to the pocket to tell me where to hit and where to serve. And then I have everyone on the court talking and I think that’s the most important thing. I think those little aspects with anybody rolling, just turns everything on and gets everyone going. And I think that’s one of the most important aspects to our team.”

“It’s just been continuous growth the entire time,” Clemons said. “One of the things is most of our girls don’t have access to club (teams), so I’m teaching skills every year. I’ve certainly had some teams that are more physically talented, taller, a little more athletic. But this particular team, this group, they have a very high volleyball IQ. We spent a lot of time this offseason when we were in COVID, really learning the game, and watching a lot of tapes. They listen very well, they’re just a mature group.”

After taking the first set, East edged out to a lead in the second set before scoring seven of eight points, with Isabelle Zavala scoring a kill, followed by an ace by Isabela Nunez and hitting error by the Scots as the Blades took an 18-10 lead.

“It was definitely a hard-fought match, for sure,” Highland coach Melani Gibson said. “East High definitely brought their A-game tonight, and it really showed. But I know for this next match, we are going to be much more prepared.”

The Blades opened the final set with a 5-0 lead, and then responded to three straight points by the Scots, with three of their own, capped by an ace by Arianney Barrera that gave East an 8-3 lead.

But Highland scored four straight, sparked by three kills by senior Taniyah Fletcher and an ace by Madison Edwards to trim the deficit to 8-7. Maritza Gonzalez Ortega also had a strong showing for the Scots, finishing with a team-high nine kills, while Fletcher added seven for the match.

“We have some clearly defined goals, and going undefeated is one of our goals,” Clemons said. “So every win is a mark toward our goal.”