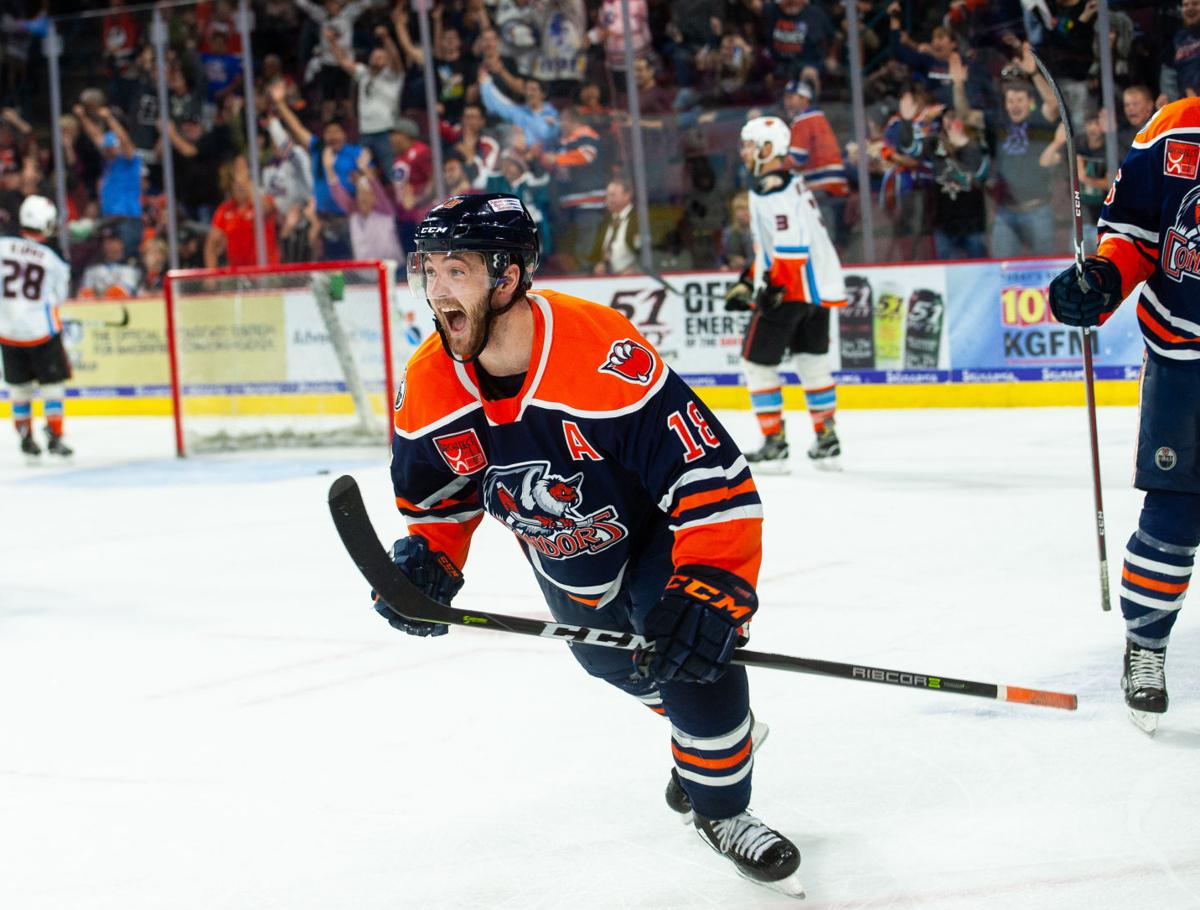 Bakersfield's Josh Currie celebrates his game-winning, double-overtime goal  on Saturday night at Rabobank Arena. The Condors won 2-1 and will play Game 6 of the Pacific Division Finals in San Diego on Monday night. 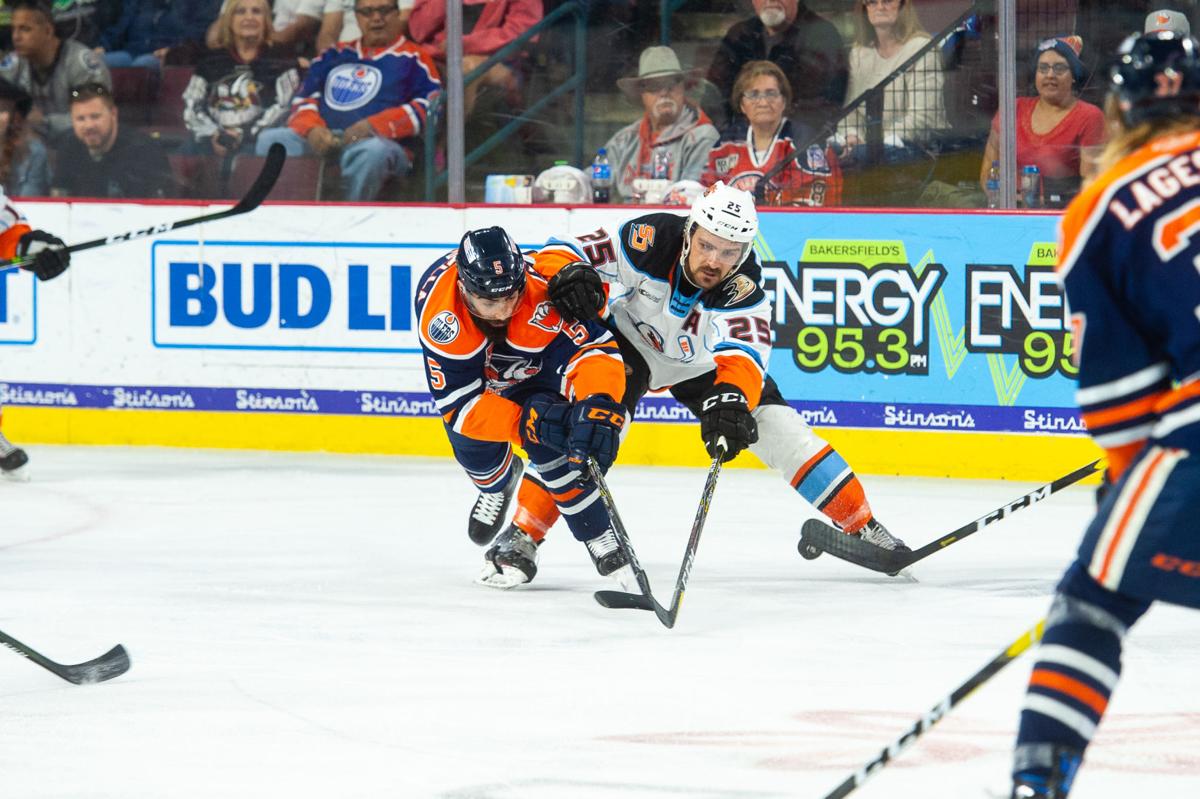 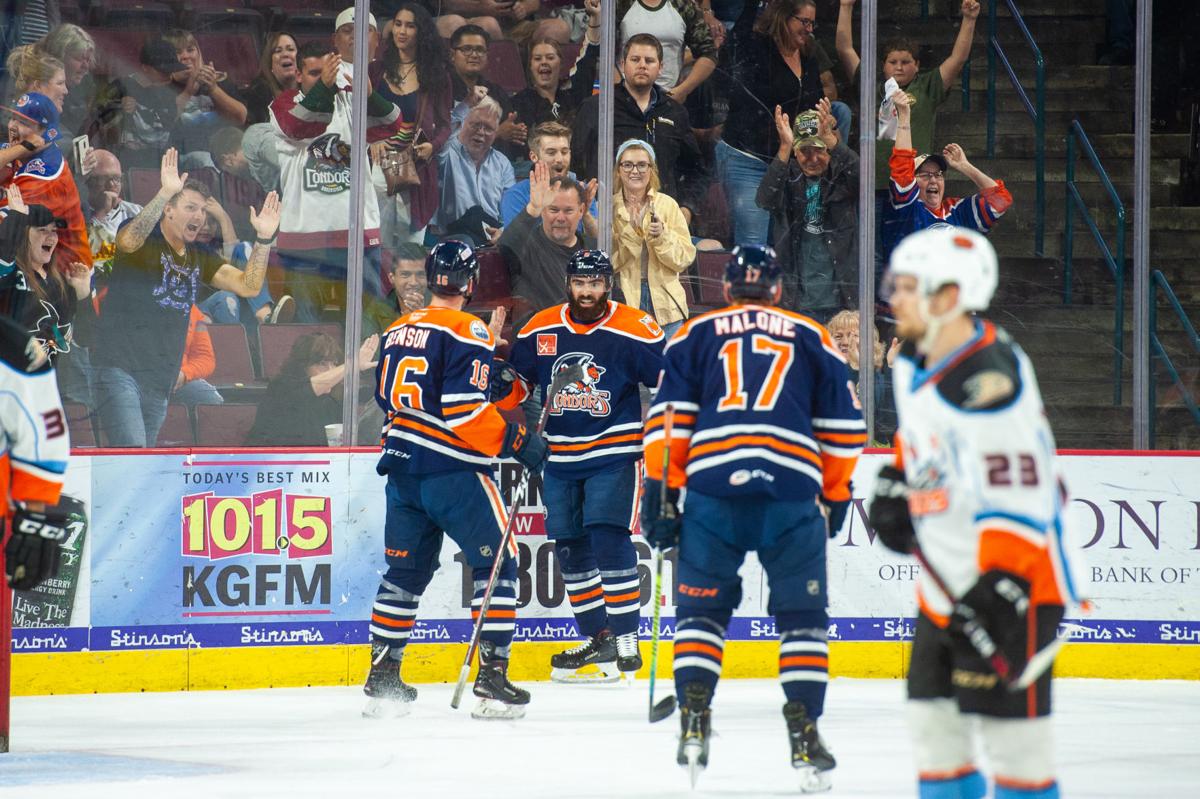 Joe Gambardella, center, is congratulated by Tyler Benson (16) and Brad Malone (17) after scoring the first goal of the game against San Diego on Saturday night. 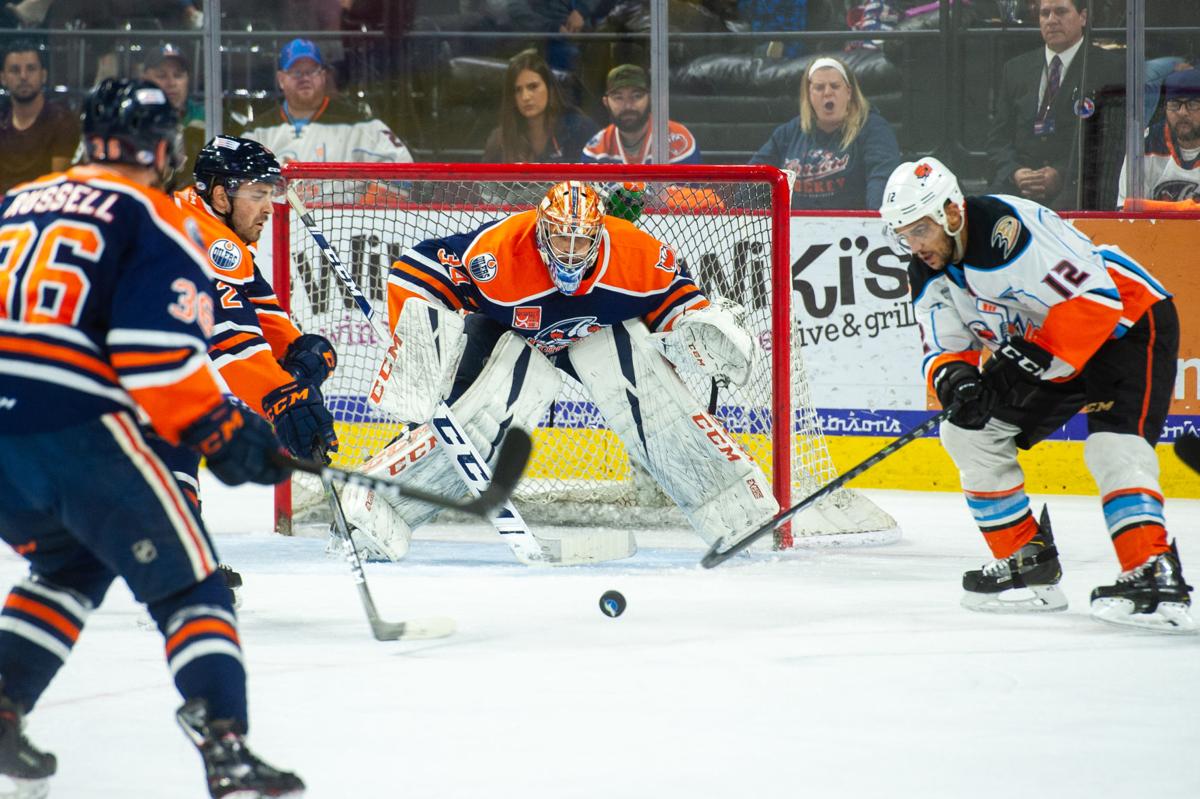 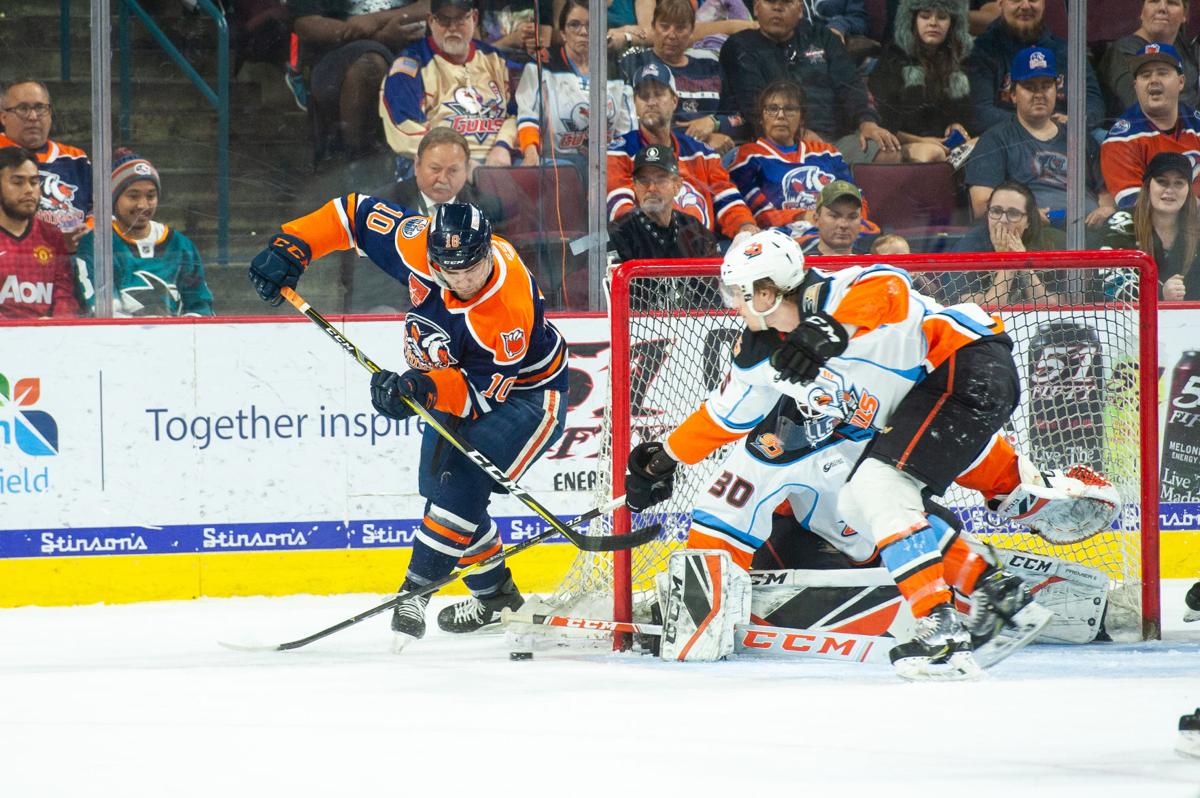 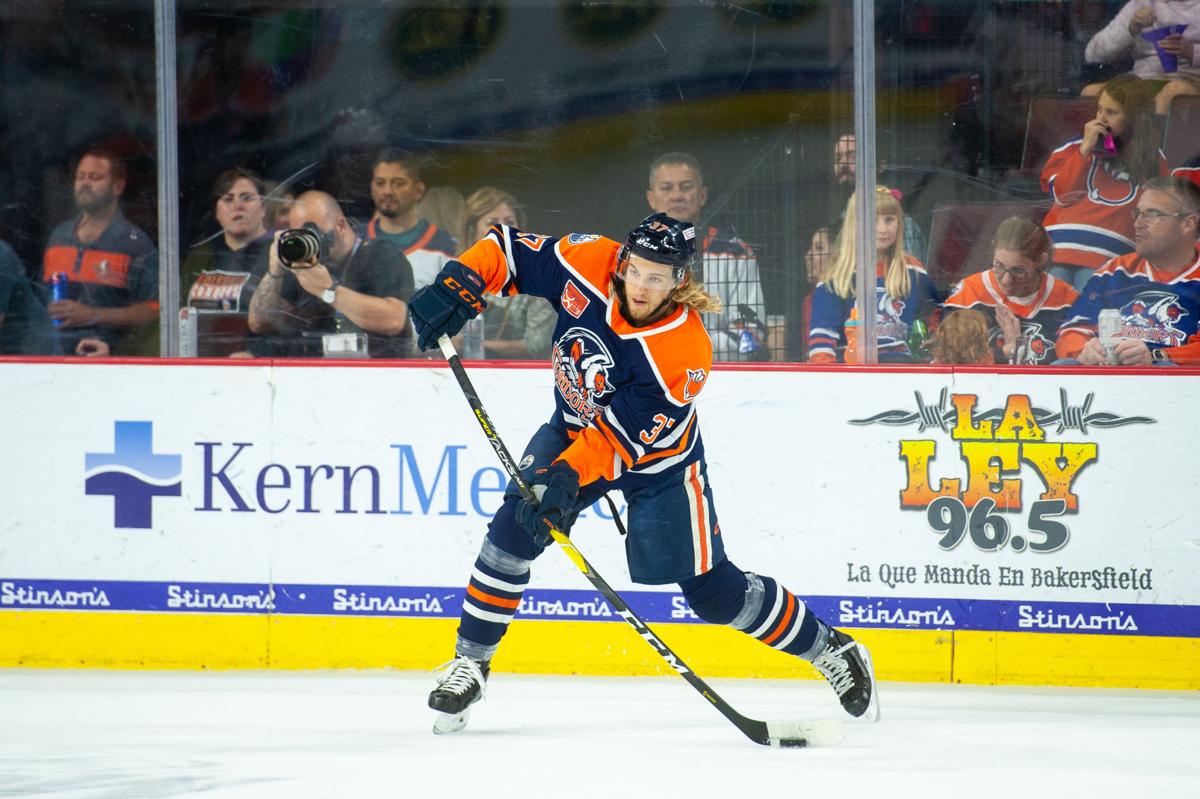 Condors defenseman William Lagesson takes a shot during Game 5 of  the Pacific Division Finals against San Diego on Saturday night at Rabobank Arena. 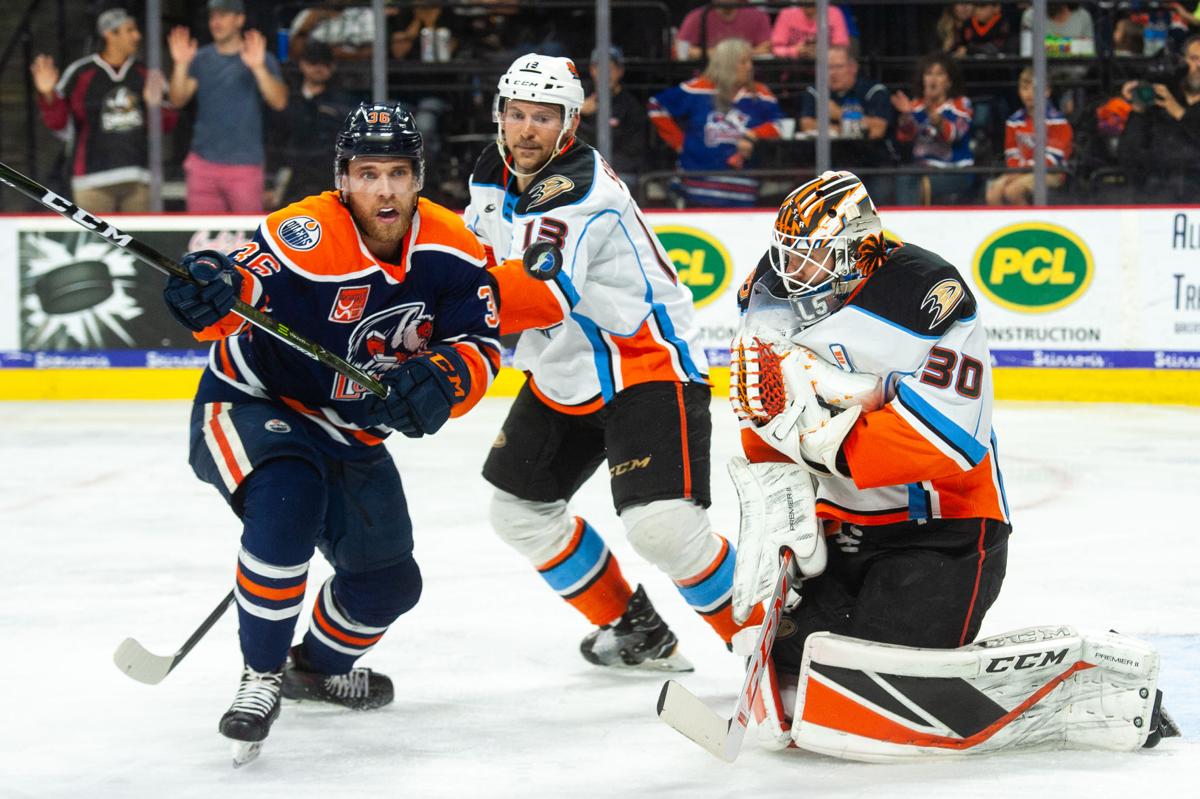 San Diego goaltender Jeff Glass makes a second-period save with Patrick Russell and Patrick Sieloff in front of him on Saturday night at Rabobank Arena.

Bakersfield's Josh Currie celebrates his game-winning, double-overtime goal  on Saturday night at Rabobank Arena. The Condors won 2-1 and will play Game 6 of the Pacific Division Finals in San Diego on Monday night.

Joe Gambardella, center, is congratulated by Tyler Benson (16) and Brad Malone (17) after scoring the first goal of the game against San Diego on Saturday night.

Condors defenseman William Lagesson takes a shot during Game 5 of  the Pacific Division Finals against San Diego on Saturday night at Rabobank Arena.

San Diego goaltender Jeff Glass makes a second-period save with Patrick Russell and Patrick Sieloff in front of him on Saturday night at Rabobank Arena.

When Josh Currie’s line hopped off the bench to take a face-off late in double overtime on Saturday night at Rabobank, there was a plan in play.

Four players touched the puck in a span of a few seconds and the last, Currie, sent a shot from the edge of the right face-off circle into the net as the Condors beat San Diego 2-1 to keep the Pacific Division Finals playoff series live.

The Condors, who were facing elimination, now head back to San Diego for Game 6 on Monday. A Bakersfield win there would mean a Game 7 at Rabobank Arena on Wednesday night.

“That’s a huge goal so I’ll take it,” Currie said of his first in the playoffs. “It’s nice to chip in and hopefully I can continue.”

The game winner game at 13:02 when Ryan McLeod won the draw back to Caleb Jones at the point. Jones sent the puck down the wall to Tyler Benson. Currie yelled out from the edge of the right circle and Benson thread a pass to Currie. Curie’s quick shot beat Jeff Glass to the glove side.

“They had a plan of what they wanted to do,” Condors coach Jay Woodcroft said. “I heard them talking about it on the bench. It’s one of the things in their arsenal as a line but it doesn’t happen unless you win a faceoff.”

McCleod, who just joined the Condors after his junior season ended and was playing his fourth game, didn’t get an assist on the goal, but his role was crucial.

“I’ve been very impressed with the way McLeod has come in against an excellent face-off team in San Diego and the ability for him to come in and assert his dominance on the dot has been great,” Woodcroft said.

Bakersfield’s Stuart Skinner, who came in relief of Shane Starrett in Friday night’s loss 4-2 loss in San Diego, made his first start in net since March 8. He stopped 45 shots in front of 7,226 fans.

“For us, it was like a Game 7, Skinner said “I’m really proud of the boys for grinding down and working hard and putting in the effort we did tonight and get the win.”

As for Currie’s impression of Skinner: “Stellar. Unbelievable,” he said. “There’s so many words to describe how he played tonight but ... he did a great job.

“He was calm, poised in there. For a young kid to get to thrown into Game 5 of the second round of the playoffs, for him to show his confidence like that it’s impressive.

The overtime period was wide-open with both teams getting 12 shots on goal, many of them quality.

Skinner stopped Kevin Roy on a shot from the low slot at 5:30 of the first OT and made another save 20 seconds later and Bakersfield’s Tyler Vesel just missed scoring off a quick rush after that in a wild minute of action.

Vesel shot just high on a great chance for a Bakersfield game winner with 4:40 remaining and Skinner and Nolan Vesey combined for series-saving saves with 2:20 left.

Neither team had many chances in a tight third period (six shots for the Gulls and five for the Condors).

The Condors came out flying to start the game, firing the first five shots and testing Glass early.

They broke through 8:59 into the period when Evan Bouchard’s shot from the point was double deflected, first by Brad Malone and then by Joe Gambardella, to beat Glass on a power play.

The Condors had been 1-for-9 on the power play against the Gulls prior to that goal.

The Gulls tightened defensively after Bakersfield’s power-play goal and did not allow another Condors shot the rest of the period while putting five of their own on Skinner, including two in the final 33 seconds.

San Diego maintained that momentum to start the second period as they spent most of the first few minutes in Balersfield’s zone before taking a penalty.

The Condors got four shots on goal on the subsequent power play but could not beat Glass.

San Diego tied the game at 10:44 on a quick up-ice rush as Corey Tropp made a cross-slot feed to a wide-open Kevin Roy, who fired the puck into the mostly-open net from low in the right circle.

The Condors killed a San Diego penalty a couple of minutes later then had one of their own killed (generating no shots) in the final three minutes of the period.

Condors credit close-knit team for making the season so special