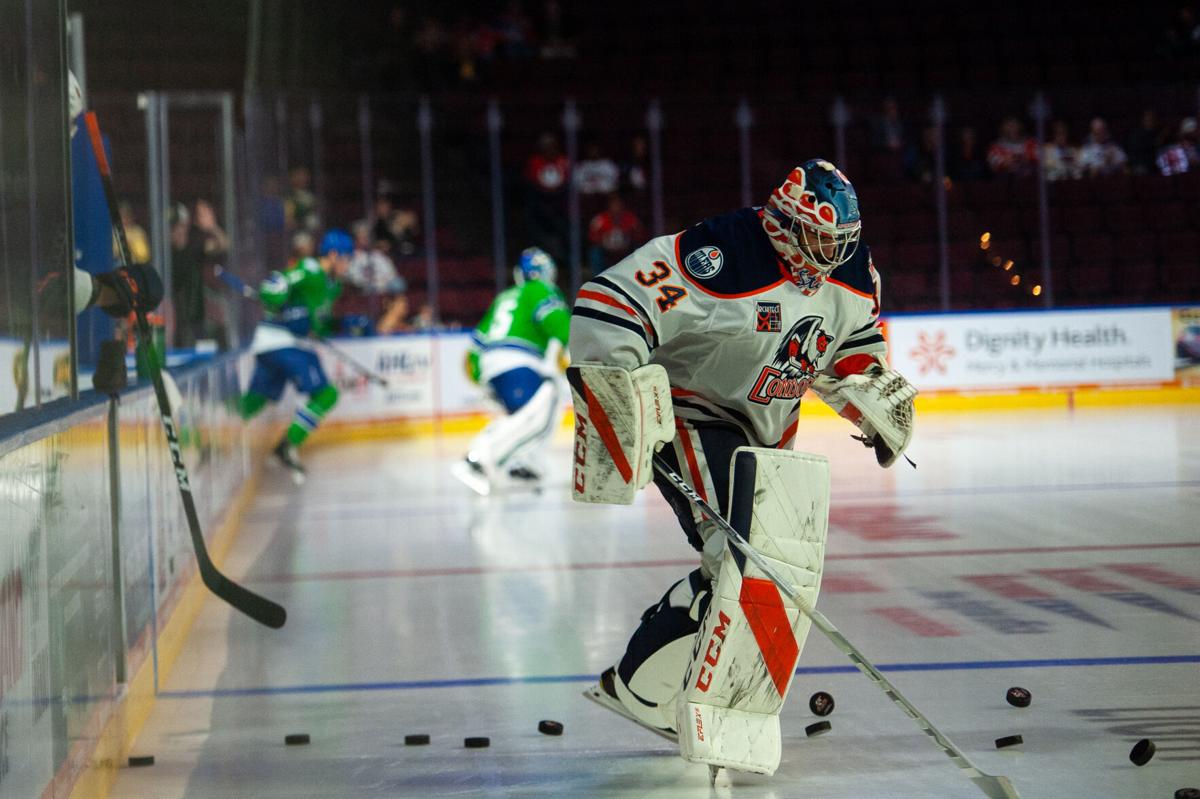 Stuart Skinner leads the Condors out for warmups before Saturday's season opener at Mechanics Bank Arena. 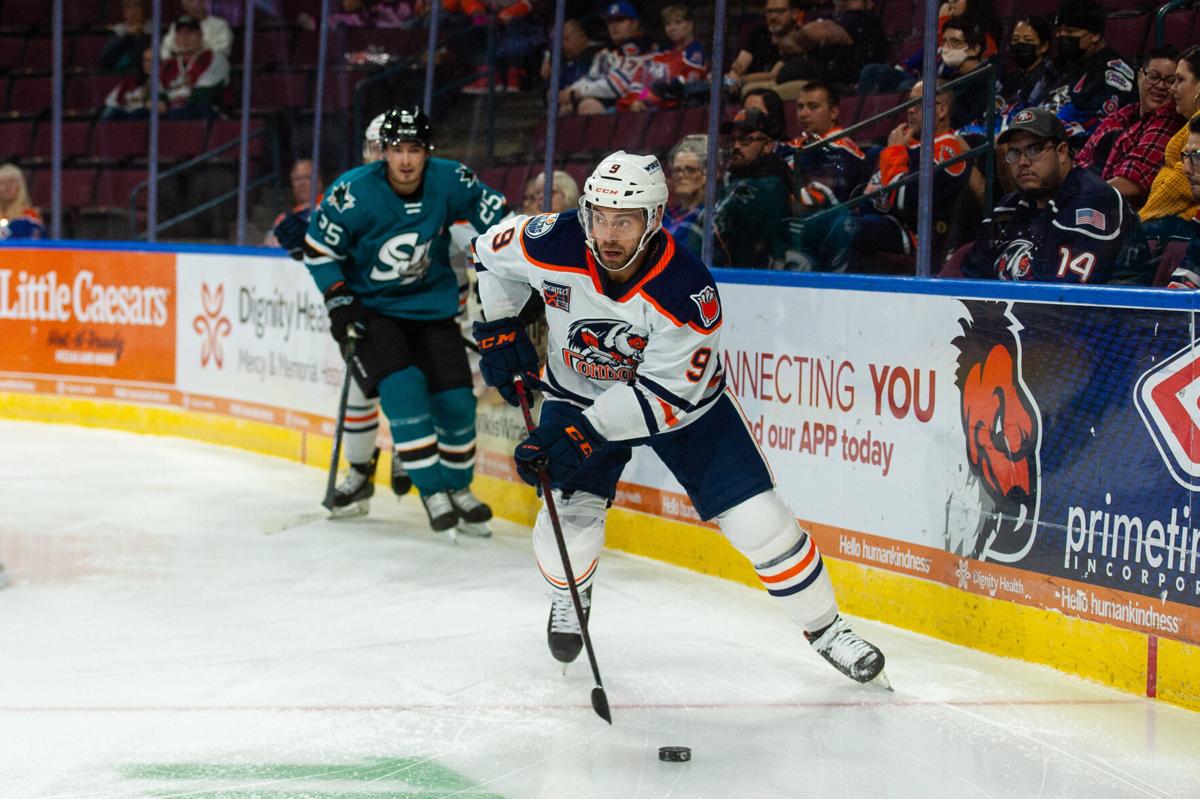 Condors center Luke Esposito skates with the puck during Sunday's game against the San Jose Barracuda at Mechanics Bank Arena. 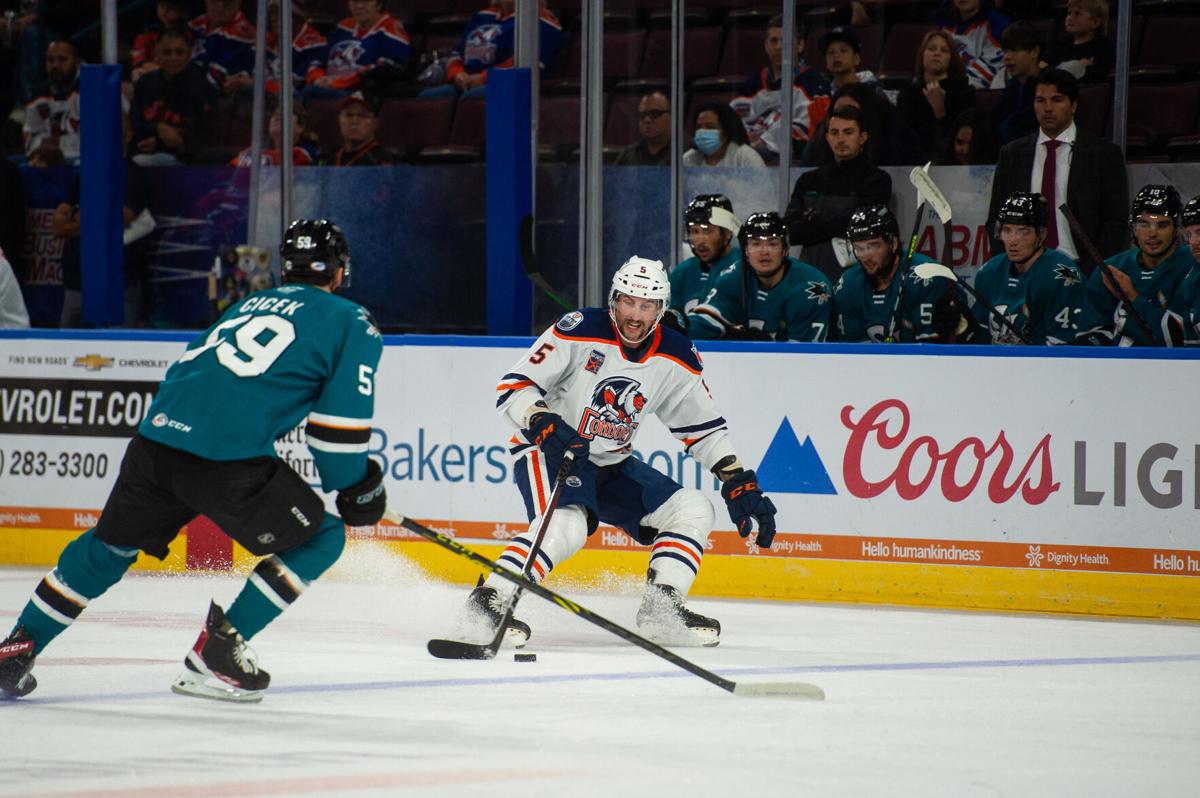 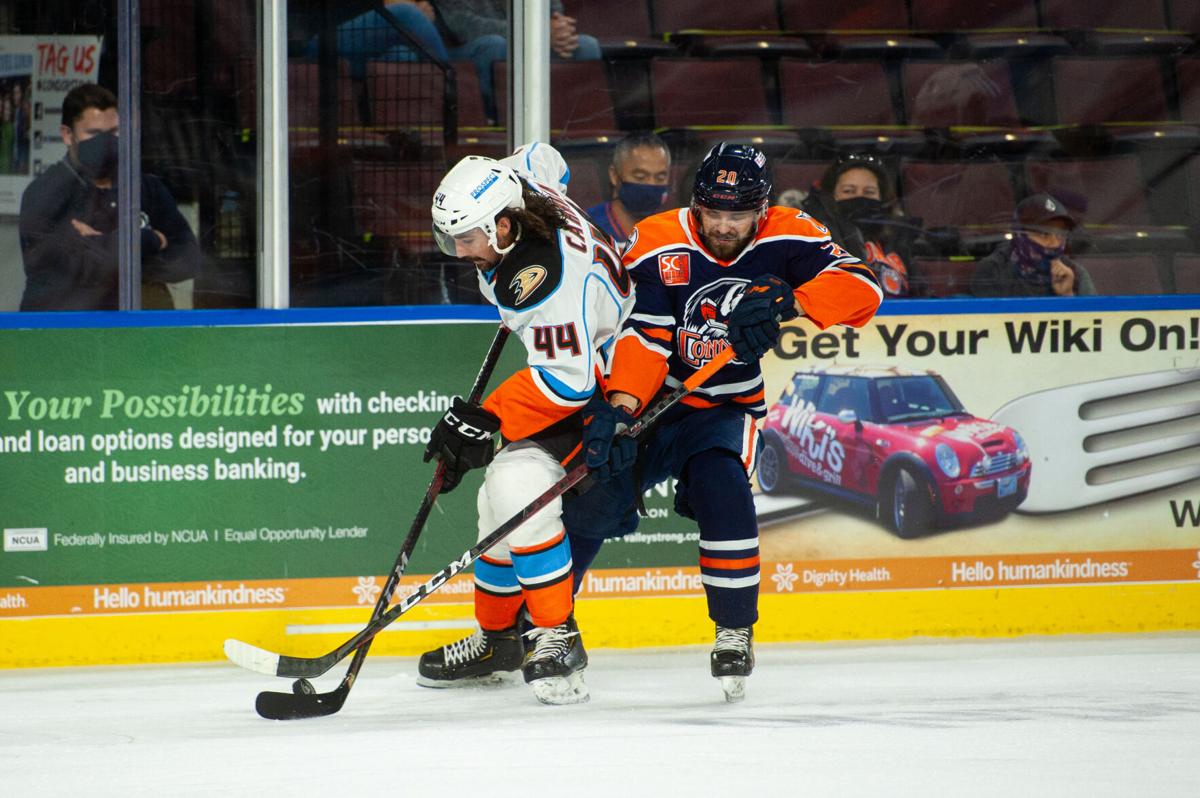 Stuart Skinner leads the Condors out for warmups before Saturday's season opener at Mechanics Bank Arena.

Condors center Luke Esposito skates with the puck during Sunday's game against the San Jose Barracuda at Mechanics Bank Arena.

Bakersfield posted a 5-3 victory over Abbotsford on Saturday, Adam Cracknell had two goals, Seth Griffith had three assists, and Yanni Kaldis scored his first AHL goal to lead the way.

The Condors swept their weekend games with a 1-0 win over San Jose on Sunday on the strength of a Griffith goal.

Last season, Bakersfield finished second to Henderson in the regular season, but defeated the Silver Knights in a dramatic winner-take-all Game 3 to win the best-of-three series in the Pacific Division Finals.

Four of the Condors' top six scorers from last season return, including forward Cooper Marody, who was third in the AHL with 36 points (11 goals, 25 assists), and its top two goalies in Stuart Skinner and Olivier Rodrigue, along with a talented defensive core led by Vincent Desharnais.

Here’s a look at this year’s opening day roster:

No. 2 Philip Broberg: Rookie played the last three seasons in Sweden. He was named the best defenseman at the 2019 IIHF U-18 World Hockey Championships, and led all d-men in goals and was second in tournament scoring at the 2019 Hlinka Gretzky Cup.

No. 3 Markus Niemelainen: Native of Finland played in 21 games for the Condors last season. He tied for the most goals by a defenseman with two and also had four assists.

No. 6 Vincent Desharnais: Set for his third season with Bakersfield, he led the team in penalty minutes with 34 and had 10 assists, including one in the playoffs last year. He signed a two-year deal with the Condors in April.

No. 8 Yanni Kaldis: Returns for his second season with the Condors. He is in the final year of a two-year deal with Bakersfield. He had seven assists last year in 28 games.

No. 23 Michael Kesselring: After playing two seasons at Northeastern, scored a goal and had three assists in 21 games for Bakersfield last year. He stepped things up with three assists in the playoffs and signed a three-year deal with Edmonton, which will start this season.

No. 25 Philip Kemp: Playing 32 games in Sweden and also had an assist in 12 games with the Condors, and added a goal in Bakersfield’s Game 3 victory over Henderson. Signed a three-year entry-level contract with the Oilers in November of last year.

No. 43 Filip Berglund: He joins the Condors after playing six seasons in Sweden. He signed a two-year entry level contract with Edmonton last year. He represented Sweden at the 2017 World Junior Championships and had an assist in three games.

No. 5 Tim Schaller: Veteran has played 276 games in the NHL, most recently with the Vancouver Canucks and Los Angeles Kings two seasons ago. He played for Wilkes-Barre/Scranton last season, finishing with eight goals and 10 assists in 21 games.

No. 7 Ostap Safin: Starting his third season with the Condors, Safin had two goals in a game on March 24, part of a three goals in two game burst last season. He also scored a goal and had an assist in the playoffs.

No. 9 Luke Esposito: Center is set for his fourth season in Bakersfield. He had seven goals and five assists in 38 games last year, and also scored a goal in the playoffs. He enters the season ninth in AHL games played for the Condors.

No. 11 James Hamblin: Left winger starts his second season with the Condors. He had seven goals and eight assists in 38 games last year, and also added an assist in the playoffs.

No. 13 Kirill Maksimov: Right winger returns for his second season with Bakersfield after playing last year in his native Russia. He had five goals and eight assists two seasons ago for the Condors, and compiled 27 points in 25 games playing for Zvezda Moscow in the VHL.

No. 14 Devin Brosseau: Left winger is back for his second season with the Condors. The second-year player had four goals and an assist in 27 games last year with Bakersfield after opening the season in the ICEHL where he had 21 points in 34 games.

No. 17 Brad Malone: Veteran center has 176 games of NHL experience. He is starting his fifth season in Bakersfield, where he scored 10 goals and 11 assists in 26 games last year, and added two goals and an assist in the playoffs.

No. 19 Dino Kambeitz: Right winger signed a one-year deal with the Condors after five seasons in the WHL, where he scored 42 goals and had 50 assists in 211 games. He served as captain for the Lethbridge Hurricanes last season.

No. 20 Cooper Marody: Talented right winger was third in the AHL in scoring last season with 21 goals and 15 assists. He also had a goal and two assists in six playoff games last year. He has 120 points in 130 games for Bakersfield the past four seasons.

No. 22 Graham McPhee: Left winger played in three games for the Condors, but is still classified as a rookie. He played four years at Boston College, where he had 22 goals and 33 assists in 138 games. He played 21 games with the Vienna Capitals of the ICEHL last year.

No. 27 Adam Cracknell: Starts his 16th professional season in a career that includes nine stints in the NHL with seven teams. Right winger had 11 goals and 19 assists in 39 games for Bakersfield last season, and had an incredible three goals and seven assists in six playoff games.

No. 39 Seth Griffith: Right winger has 79 games of NHL experience, with eight goals and 11 assists. He returns for his second season with the Condors, where he compiled 10 goals and 18 assists in 39 games, and then added three goals and four assists in six playoff games last year.

No. 46 Tim Soderlund: Played parts of five seasons in Sweden before splitting time between the AHL and ECHL the past two seasons. The ring winger has 19 goals and 24 assists in his career. He won a silver medal at the 2018 World Junior Championships with Sweden.

No. 47 Matteo Gennaro: Former Tucson Roadrunner, who played for the Wichita Thunder of the ECHL last season, brings more than 400 games of professional experience to Bakersfield. He had 56 points last year in 61 games with the Thunder and signed a one-year deal with the Condors in July.

No. 50 Raphael Lavoie: Center starts his first full season with the Condors after splitting time between Sweden and Bakersfield last year. In 19 regular season games, he scored five goals and had five assists with the Condors and added a goal and three assists in the playoffs.

No. 32 Ilya Konovalov: Was 54-41-9 in four seasons playing in the KHL, finishing with a 2.14 goals-against average. Signed a two-year NHL entry level contract in May, and will be making his North American debut with Bakersfield this season.

No. 33 Olivier Rodrigue: Played in 11 games for the Condors last season, finishing 4-5 with a 2.98 goals-against average. His best game came against Ontario on April 16 when he stopped 30 shots to register his first professional shutout.

No. 34 Stuart Skinner: Finished 20-9-1 during the regular season with a 2.38 goals-against average, and then went 4-2 in the playoff to help guide Bakersfield to a victory over Henderson in the Pacific Division Finals.