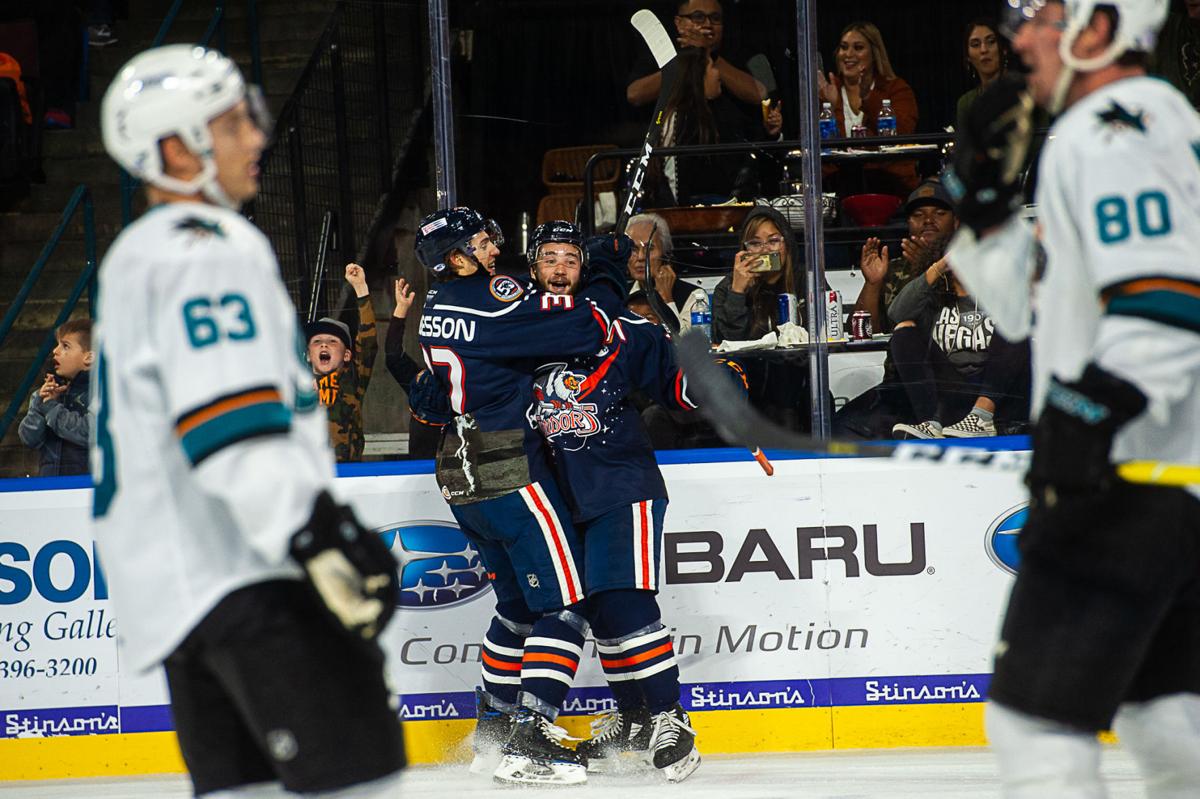 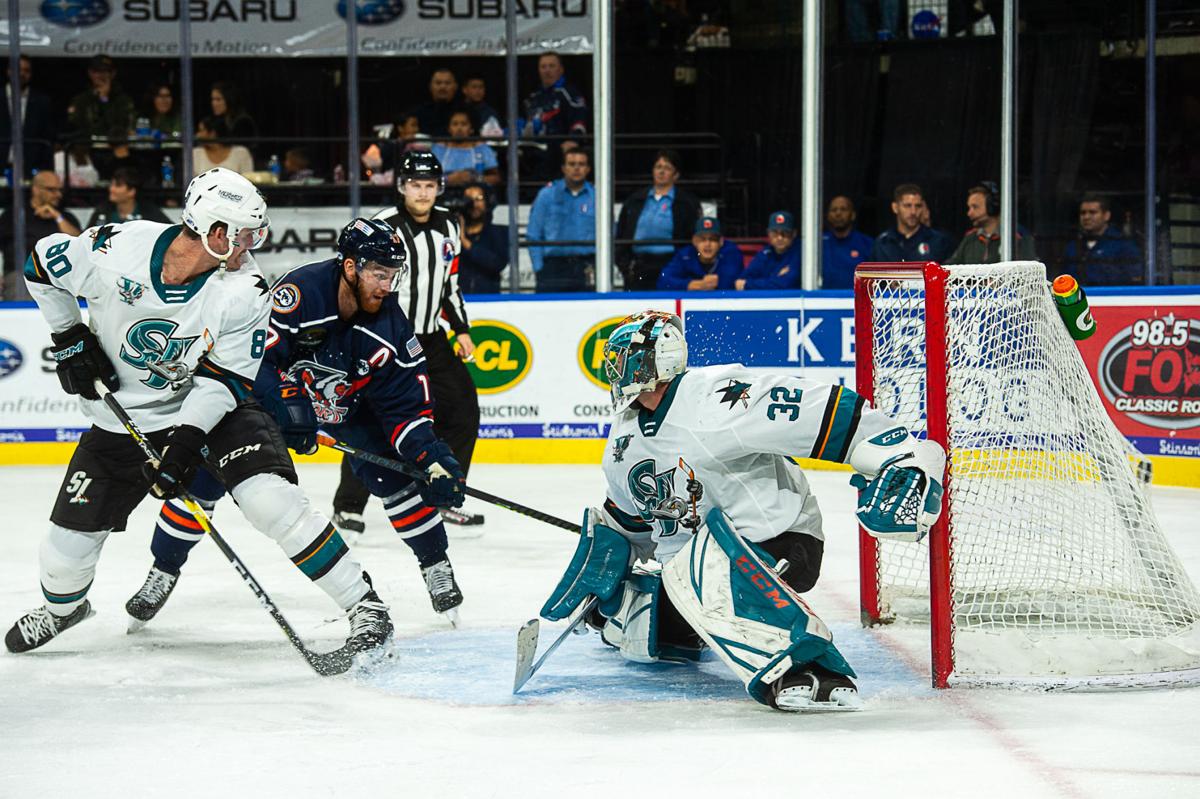 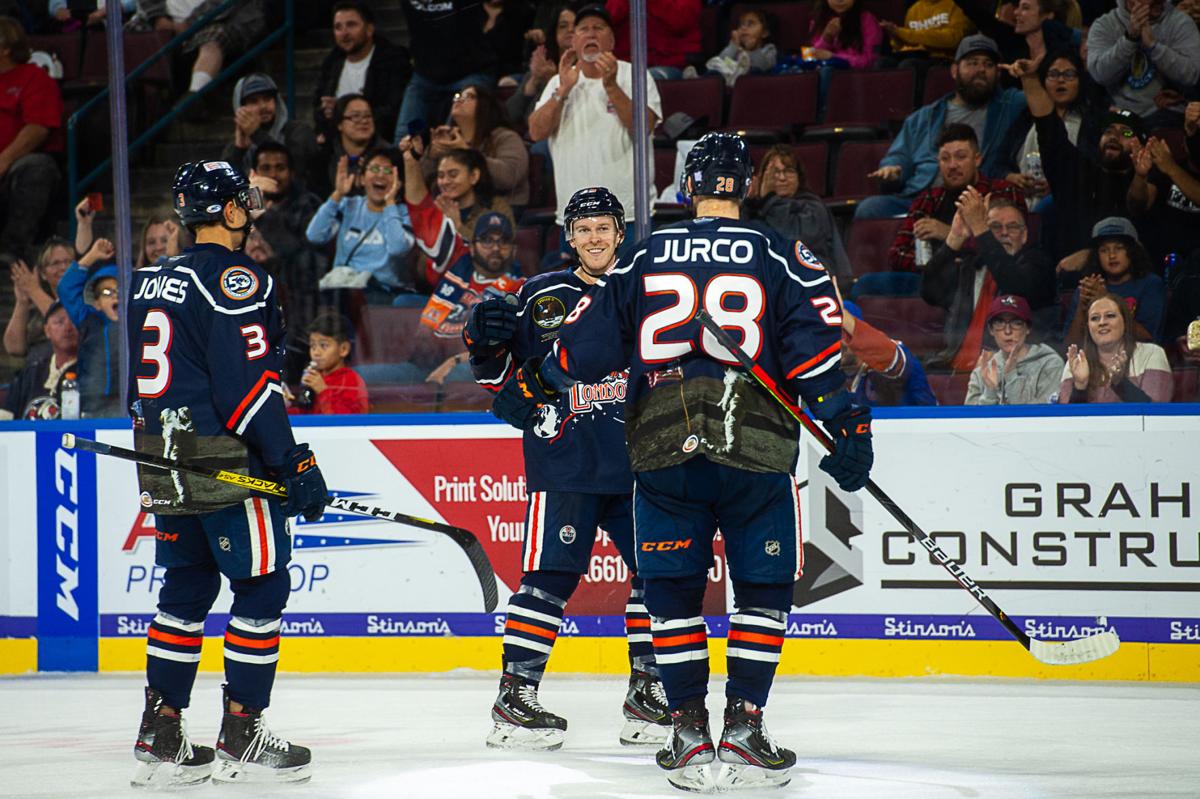 Thirty-six nights after opening the American Hockey League season with a victory over San Diego, the music was once again blaring from inside the Condors locker room.

A 6-3 victory over the San Jose Barracuda on Saturday night at Mechanics Bank Arena broke an 0-4-1 skid on home ice and sent the team into a day off in high spirits.

“It was definitely something we wanted to prove we could win on home ice,” said Tyler Benson, who hit an empty net with 38 seconds left for his first professional hat trick. “It’s a big thing for us to be able to take advantage of (home ice). To get that one tonight is big and we want to carry that on.”

“At home it’s been uneven in terms of consistency of play,” Woodcroft said after the Friday night loss. “I think we’ve shown flashes of good hockey on home ice but we haven’t yet played a 60-minute game. We need to bring our road game to home ice.”

The Condors found themselves in a 1-0 hole just three minutes into Saturday night’s game when San Jose scored a power play goal on its first shot. Benson tied the game with his first of two power-play goals at 9:24 but five minutes later goaltender Stuart Skinner played the puck to the left of his net and sent a pass across the slot which ended up right on the stick of San Jose’s John McCarthy who hit the open net to put Bakersfield down 2-1.

But the Condors, and most importantly Skinner, did not collapse after the gaffe.

Bakersfield scored three unanswered goals in the second and Skinner made some big saves to right the ship.

The Condors returned the bulk of last season’s Pacific Division champion team — almost the entire defensive group, the top four scorers and all the goaltenders — yet the struggles on home ice have left them just 6-6-1-0 and in fourth place in the division.

“We have high expectations, especially coming off last season,” Benson said. “We just want to keep building off what we did. We’re happy with the way we’re playing right now but we just have to keep finding ways to win.”

The difference between winning and losing is often razor thin and the Condors have been below average in three key areas: power play, penalty kill and goaltending.

The Condors have used three goaltenders, that played last season, with a combined .884 save percentage. Both the power play (4-for-13) and penalty kill (9 of 10 kills) showed marks of improvement over the weekend.

“I think the power play has had numerous chances on the year but hasn’t found the back of the net,” Woodcroft said. “For us, as a coaching staff, you get frustrated with the numbers or what the result is but when you focus on the process — are we doing what we want to do, are we creating what we want to create? — if you stick with it I think the results follow.”

As for the goaltending, Woodcroft said “it does” when asked if it needed to be better.

But Woodcroft sees upside in Skinner and despite a rough game on Friday night came right back with him on Saturday night.

“I think the most important statistic for a goaltender is the win-loss record,” Woodcroft said. “Stuart’s putting up some wins for us. He’s finding a way to get that done. I thought he showed a lot of mental fortitude (Saturday night) by responding after the mistake he made. He made a couple of big saves, especially in the second period.

“What I thought was a tremendous sign, was that his teammates rallied around him and played hard for him. I think that’s a good sign.”

Starrett will likely not be ready for games in Colorado on Friday and Saturday night which means more opportunity for Skinner.

“We’re going to continue to ride him.” Woodcroft said. “It’s great for his personal development but he’s laying claim to that 4-by-6 cage. He wants that to be his net and he’s not going to give it away for any reason. He’s continuing to build a little bit of consistency to his personal game.”

Joe Gambardella (six points in seven games) has missed the last six games due to an upper body injury and is expected to be ready for the Colorado series. Woodcroft also said Cooper Marody, injured early on Friday night, should be back in the lineup … With the addition of Colby Cave on Friday and Tomas Jurco on Saturday the Condors have an abundance of forwards. “We have some good forwards sent our way right now. We’re looking to make some hay while the sun is shining,” Woodcroft said. “You never know what happens in this game. For us, we’re looking to build rhythm into our four lines, we’re looking to being able to build on being 3-1 so far in the month of November.”