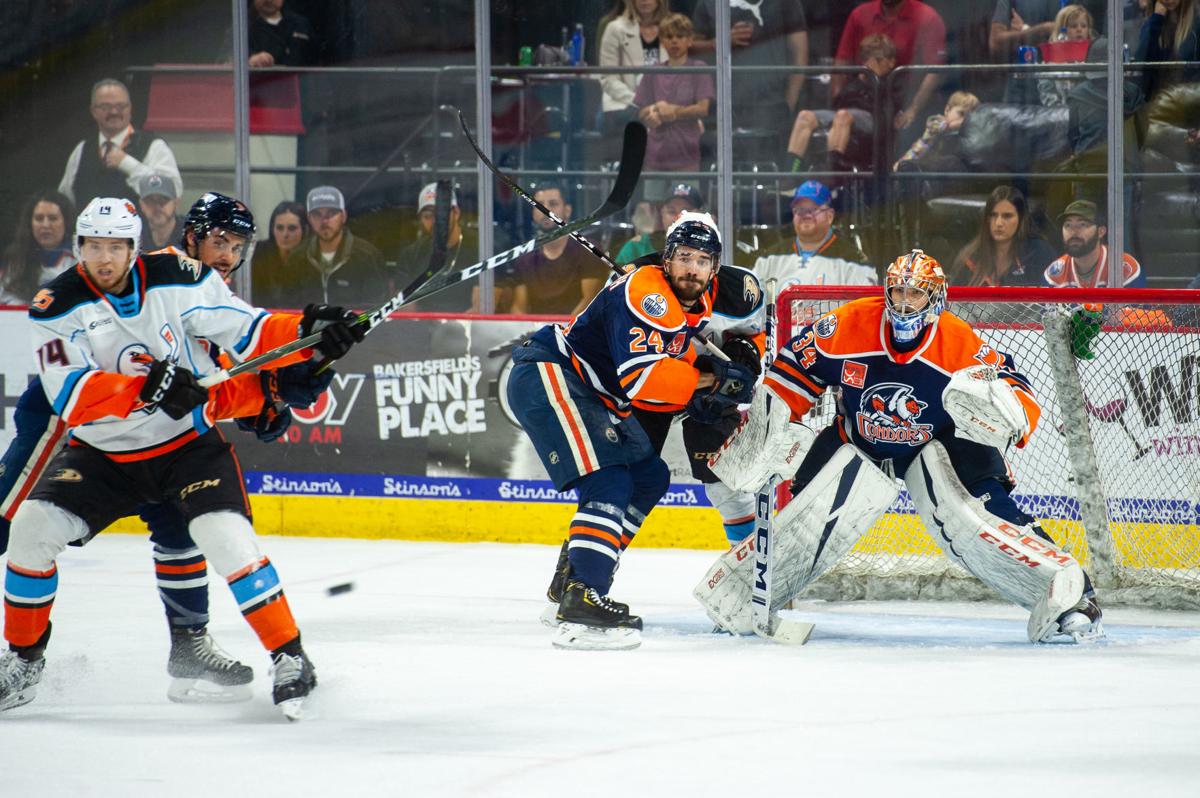 Bakersfield goaltender Stuart Skinner and defenseman Jake Kulevich track a puck as it comes their way during Game 5 of the 2019 Pacific Division Finals against San Diego at Rabobank Arena. 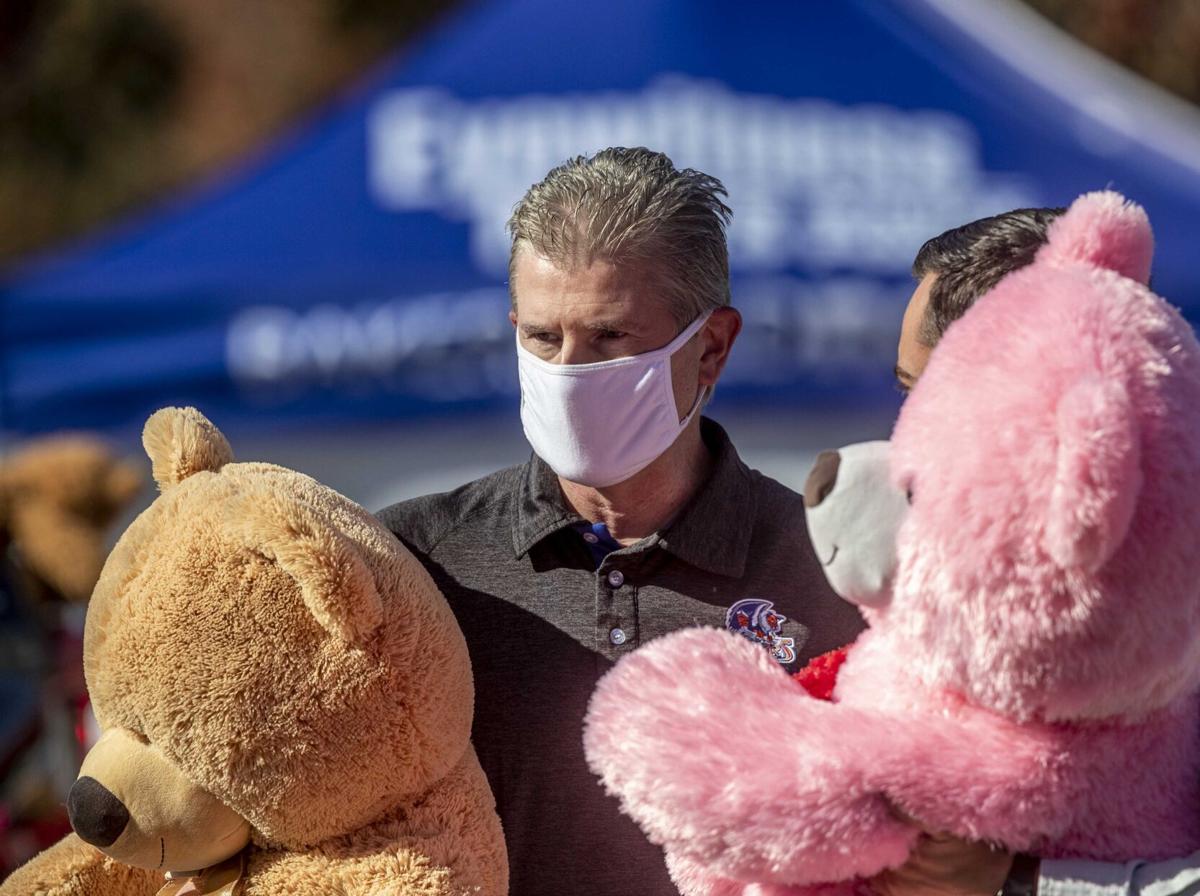 Bakersfield goaltender Stuart Skinner and defenseman Jake Kulevich track a puck as it comes their way during Game 5 of the 2019 Pacific Division Finals against San Diego at Rabobank Arena.

Nearly a year after last taking the ice, the Bakersfield Condors took a huge step toward returning to action with the American Hockey League’s announcement that 28 teams have agreed to participate in the 2021 season, scheduled to start Feb. 5.

That was welcome news for Condors team president Matt Riley, who has been working with his staff on multiple scenarios the last several months, all in preparation for a possible season.

“It’s both excitement and at the same time, we have a lot of work to do,” Riley said. “But hey, that’s what we do. I mean that’s part of the fun of it. But it’s going to be a little bit of a fire drill getting it ready here.”

Wednesday afternoon, that involved working with his son, Landon, laying out logos and planning advertisements for the ice, which was thawed and drained several months ago following the cancellation of the 2019-20 season due to the COVID-19 pandemic.

Riley said the ice is due to go in the week of Jan. 18, with plans for a two-week training camp to start the following week. He also figures the team will have a few preseason games before opening the season.

“Players are getting ready to come to town, coaches are getting prepped and obviously we have a lot of protocols we need to follow from health and safety standpoints,” Riley said. “So figuring all of that out and communicating with our sponsors, without the likelihood of fans in the stands, or at least many fans in stands, we want to do right by our sponsors and help them in any way. Obviously, we’re all in this together, trying to get through it and trying to get staff back, as well.”

Although fans in the stands are not in the immediate plans, Riley is hopeful that the health situation will improve and that more people will be cleared to watch the games in person.

“It’s going to be up to the health jurisdiction, but we hope that at some point during the season that we can have fans,” Riley said. “I’m not sure it will happen from the get go, but … in some arenas and some areas, they’ll have fans.”

In interim, fans can watch Condors games live on AHL.com, and all games are scheduled to be on the radio. Riley added that there are also discussions about having local television networks broadcasting games this season.

An improved health situation should also lead to increased travel, enabling players to move freely between their parent club, the Edmonton Oilers, and Bakersfield.

“As restrictions get lightened up, as we would expect, during the season and as the vaccine gets more accessible and that sort of stuff, you’d think that the border crossing would be a little less restricted and some point, and maybe players are going up and down a little bit more freely,” Riley said. “You know, toward maybe the back half of the season. We’ll just have to wait and see what happens.”

While Bakersfield’s schedule has not been unveiled, Riley said the team will likely play only 40 games, with about half at Mechanics Bank Arena and the other half on the road. He also said the schedule might also be announced a section at a time, with games being finalized or updated as the season progresses.

The games will also only be within the newly-formatted Pacific Division, featuring the Condors, Colorado Eagles, Henderson Silver Knights, Ontario Reign, San Diego Gulls, San Jose Barracuda, Stockton Heat and Tucson Roadrunners. The Reign will be playing temporarily in El Segundo, with the Gulls set to play in Irvine this season. Three teams, the Charlotte Checkers, Milwaukee Admirals and Springfield Thunderbirds elected to opt out of play for this season because of health concerns. All three teams will return to play in 2021-22.

“So there won’t be any long trips like to the east coast or to Canada and so forth,” Riley said. “So it will be somewhat just within California and a couple of other areas just outside of California within our division.”

Riley added that the team will likely play multiple games in the same city during trips when it makes sense.

“We’re always cognizant of travel costs and things like that,” Riley said. “But even more so as bunching up games or an opponent may come in here and play two or three games, or we may go somewhere and play two, three or even four games if that makes sense, that way you’re traveling less.”

It’s all yet to be determined for Riley and his staff, who are working double time to try to organize everything.

“Certainly we’ve been planning for different scenarios, but not really knowing what those scenarios are,” Riley said. “And now here it is. So it’s kind of like you’re getting ready for a season in a month. So it’s going to be hectic …, but hey, it will happen one way or another, and it’s a good thing we’ve got great partners in the arena and the city, and our sponsors and people we work with. We’ve got a lot of folks in this community that make this thing work that we can reach out to and say, ‘hey we need help doing this or help doing that.’ And folks are always ready to step up and help wherever their businesses can.”

Despite the added pressure, Riley is eager to get started.

“I’m happy for the players that they can get back doing what they love and trying to fulfill their dreams of making the NHL,” Riley said. “I’m happy for our staff. Hopefully we can employ some more folks and they can earn a paycheck, and then eventually that trickles down to once we do get fans, to restaurants in the area and their employees. Just the overall economic impact. Nextdoor at the Marriott, getting teams coming in which helps their bottom line. And just the overall economic impact of the city. It’s such a big deal.”