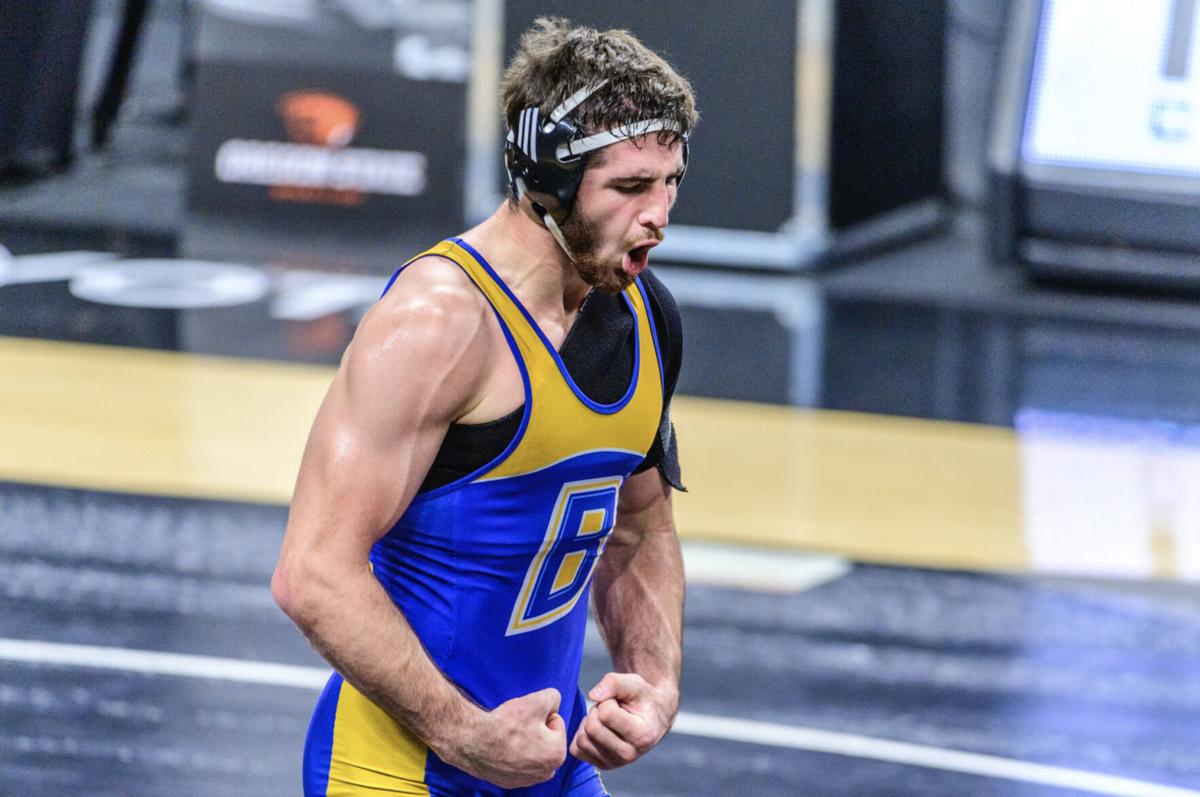 CSUB senior Dom Ducharme celebrates a win in the 184-pound finals of the Pac-12 championships last month. Ducharme will compete in the NCAA National Tournament this week. 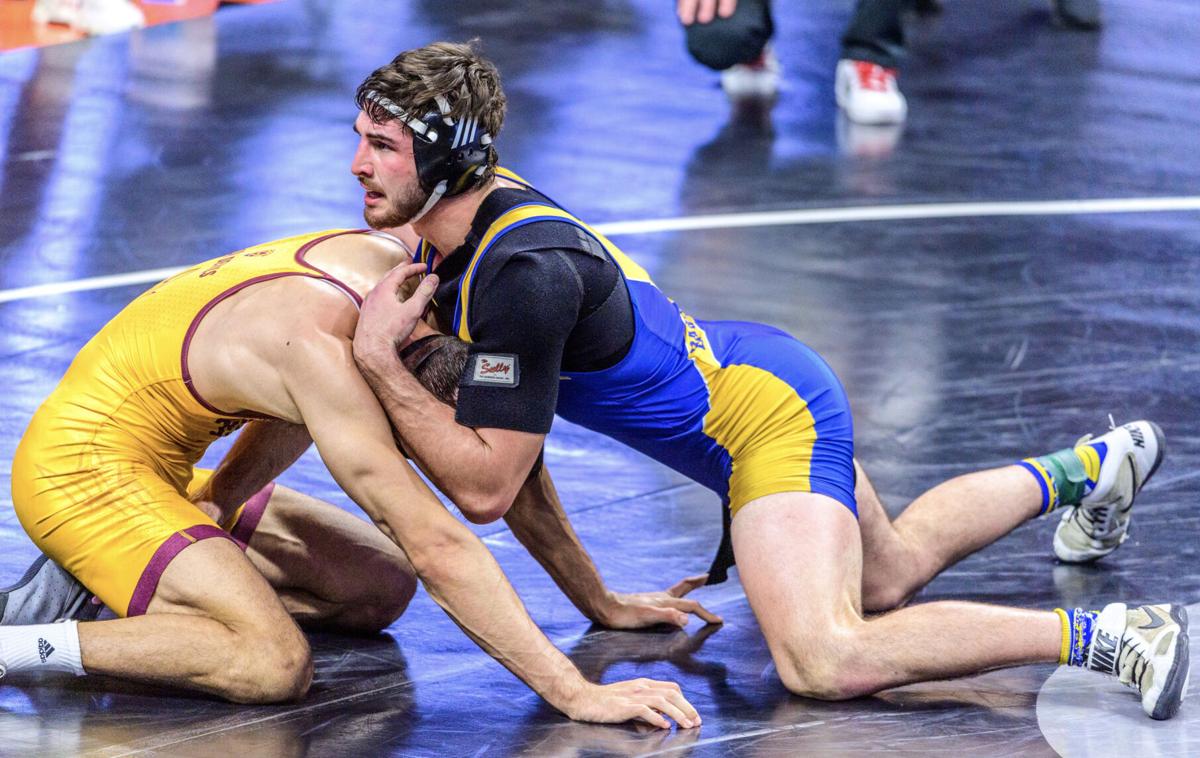 Seen here against Cade Belshay of Arizona State in the Pac-12 semifinals, CSUB's Dom Ducharme is hoping to make a big splash in his second appearance at the Division I national tournament. Ducharme went 1-2 at the same tournament in 2019.

CSUB senior Dom Ducharme celebrates a win in the 184-pound finals of the Pac-12 championships last month. Ducharme will compete in the NCAA National Tournament this week.

Seen here against Cade Belshay of Arizona State in the Pac-12 semifinals, CSUB's Dom Ducharme is hoping to make a big splash in his second appearance at the Division I national tournament. Ducharme went 1-2 at the same tournament in 2019.

Dominic Ducharme has always been a fighter.

His love of aggressive activity was forged at age 5, when he began practicing Jiu Jitsu. Ducharme, currently a college senior, is hoping to turn his passion for fighting into a career, as he plans to pursue mixed martial arts at the professional level.

But even if he finds success in this pursuit, Ducharme admits it might not be enough to fill a void he may begin to feel as early as this weekend.

Though he was already well into his Jiu Jitsu training at the time, Ducharme says wrestling instantly became his first love when he first took to the sport at age 10, and his passion quickly led to success.

A two-time state qualifier at Windsor High School, he's gone on to have great success at Cal State Bakersfield. The highlight of his time as a Roadrunner came on Feb. 28, when he edged Ryan Reyes of Oregon State 3-2 to capture a 184-pound conference title at the Pac-12 Championships.

Ducharme now sets his sights on an even more significant championship this week. He is one of three CSUB wrestlers to qualify for the NCAA Division-I Wrestling Championships, which will take place this Thursday through Saturday in St. Louis.

Entering at 5-0 and the No. 21 seed, Ducharme opens competition against Dylan Ammerman of Lehigh on Thursday morning.

Faced with his final chance to compete on the national stage, Ducharme isn't planning on holding anything back this weekend.

"This sport is my life," he said. "This is my last year and I just want to put everything out there."

His eagerness to make a strong impression is only intensified by the disappointing way his junior season concluded.

Fresh off a sophomore year where he went 4-0 in Pac-12 duals and qualified for the national tournament at 184, Ducharme had high hopes for getting back after making the jump to 197.

And though the COVID-19 pandemic would eventually lead to the cancellation of nationals, Ducharme's season was well over by that point. Just 20 seconds into his first conference match of the year against Oregon State's J.J. Dixon, he landed awkwardly on his shoulder, sustaining an injury that ended his season.

Naturally, being unable to compete for the last month of the season didn't sit well with the hyper-competitive Ducharme.

"Just me watching from the sideline, knowing what I could have done to get better, it was really hard," he said. "It made me miss competition a lot and put things in perspective as to how much I loved the sport."

To get the most out of his last season, Ducharme realized he needed to wrestle smarter.

Though an obsession to maximize his abilities has often served him well, it's also proven to be a detriment at times. Always putting pressure on himself to wrestle a perfect match, Ducharme, who dropped back down to 184 pounds this season, says overthinking every move sometimes put him in bad positions, like the one that resulted in his season-ending injury.

Not wanting to see him suffer a similar fate in his final year, CSUB coach Luke Smith worked with Ducharme to make needed mental strides, and he says he's seen him become a more complete wrestler this season.

"I think that injury gave him a new appreciation of what he needs to do," Smith said. "He used to put a lot of pressure on himself and now I think he just appreciates any opportunity he has."

His last opportunity will come this weekend, when Ducharme hopes to correct the mistakes of his first national trip.

Ducharme admits the pressure he put on himself reached new levels during the 2019 national tournament, where he felt he underachieved during a 1-2 performance.

"(I) was shell-shocked a bit the first time, seeing the mats and seeing the venue," he said. "It takes a toll on you the first time, just knowing that every wrestler you're going against is going to be top-notch. Now that I have that experience already, I think it will play in my favor for sure."

With a new perspective and a strong desire to leave the sport on a high note, he's got much higher expectations this time around.