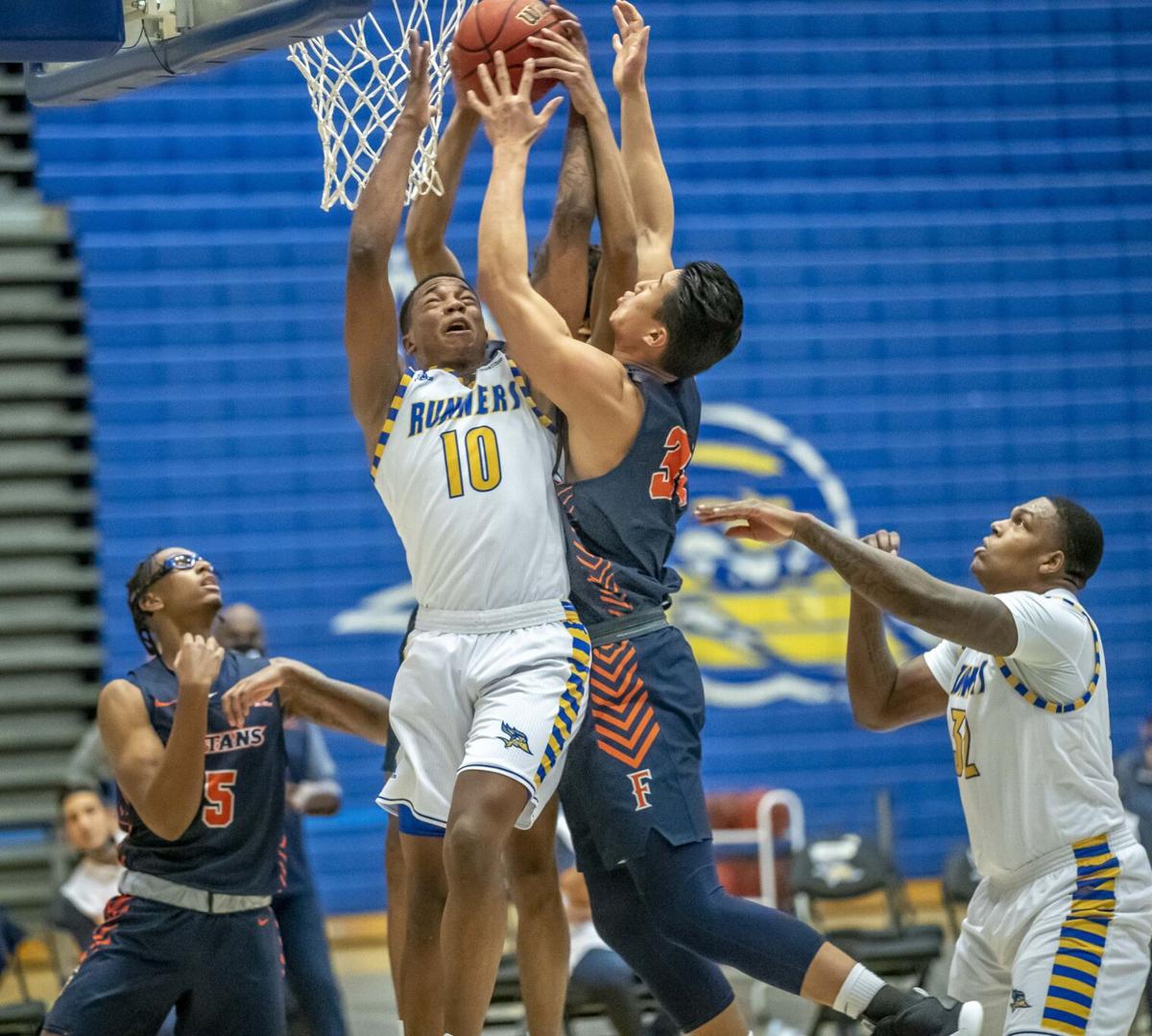 CSUB's Justin Edler-Davis (10) battles CSUF's Johnny Wang for a rebound during a 2021 game. A year after being sent home before being allowed to compete at the WAC Tournament, the Roadrunners are back in the postseason, set to face UC Davis Thursday afternoon. 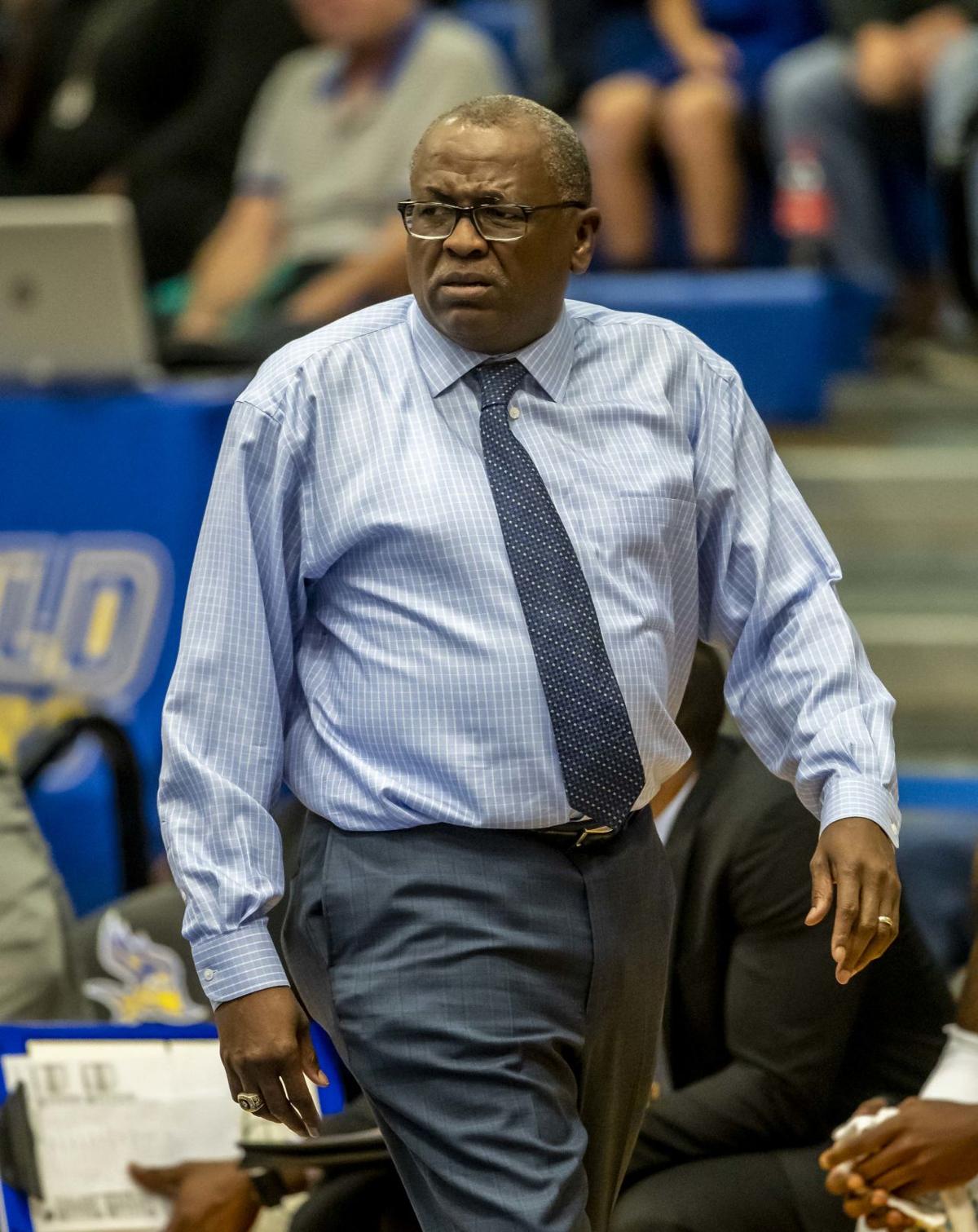 CSUB head coach Rod Barnes walks the sideline during a 2019 game at the Icardo Center.

CSUB's Justin Edler-Davis (10) battles CSUF's Johnny Wang for a rebound during a 2021 game. A year after being sent home before being allowed to compete at the WAC Tournament, the Roadrunners are back in the postseason, set to face UC Davis Thursday afternoon.

CSUB head coach Rod Barnes walks the sideline during a 2019 game at the Icardo Center.

The wild swings of emotion from the last year are enough to bring tears to Justin Edler-Davis' eyes.

Having just completed a 25-game regular season under less-than-ideal circumstances, Edler-Davis, a guard on the Cal State Bakersfield men's basketball team, gets very emotional recalling how his junior season ended, and how it seemed like his senior year may never start.

On March 11, 2020, a positive COVID-19 test for Utah Jazz center Rudy Gobert started a chain reaction that brought the sports world to a screeching halt. By day's end, the NBA and NHL season's were put on pause, and within 24 hours, the NCAA men's basketball tournament had also been scrapped.

The Roadrunners, who were set to open Western Athletic Conference Tournament play in Las Vegas on March 12, were instead sent home, dejected by the loss of a preseason that never even happened.

"I remember just being in the hotel in Vegas and just hoping that we get to play," Edler-Davis said. "And then the next morning, we're back on the bus heading back to Bakersfield."

And though the team was able to reconvene early in the fall, Edler-Davis admits he thought the prospects of a season "didn't look too good," as the U.S. continued to struggle curbing the spread of the coronavirus.

But while several teams throughout the country, including many in CSUB's new league the Big West, struggled to keep their seasons on track, the Roadrunners made it through mostly unscathed.

When two non-conference games were canceled, CSUB found three to replace them. And since the opening series of the Big West season was canceled in late December, the Roadrunners have played 18 games in a row without incident.

So when the last regular season game was played on Feb. 27, the emotion of the moment hit Edler-Davis full throttle, as he tearfully expressed gratitude for the people who allowed the season to happen.

"This has meant so much to me,' he said. "All the tests that we've had, all the traveling we've done. Whoever's had a part in helping us get on this court and playing basketball this year ... it's meant so much."

The strain of the season was felt throughout the locker room. Nine of the 14 players on the CSUB roster come from hometowns more than 1,500 miles from Bakersfield, and being isolated on a mostly empty campus, unable to return home at any point has been a grind.

"Those guys haven't been home in a long time, haven't seen their families, haven't been able to have a normal kind of year as far as in the classroom and on campus," Roadrunner coach Rod Barnes said. "And they've persevered, they stayed strong. I'm so proud of our team to get to this point."

On Thursday, exactly one year to the day when the pandemic brought sports to a full stop, CSUB will be back in Las Vegas with hopes of getting another crack at the postseason. The fifth-seeded 'Runners will take on No. 4 UC Davis (9-7, 6-4) at 2 p.m. at Michelob Ultra Arena.

Though a path to play appears to be clear, some uncertainty remains on this return trip to Vegas.

Not only will they have to continue adhering to COVID-19 protocols, the Roadrunners will also have to figure out a game plan for the only Big West team they didn't see in person this year. Due to health and safety protocols in their county, UC Davis was unable to make a scheduled trip to the Icardo Center on Dec. 27 and 28.

A win would potentially set up a semifinal matchup with top-seed UC Santa Barbara on Friday. The Gauchos, who swept CSUB during the regular season, open the tournament against Long Beach State at 11 a.m. Thursday.

The Roadrunners will also be attempting this run without starting center Shawn Stith, who was lost to a torn ACL last month.

But in a season that looked like it might not even happen, CSUB players say they've grown accustomed to such adversity, and remain confident they can push through any additional obstacles still in front of them.

“We feel good about the way things can go in Vegas," Edler-Davis said. "We feel confident that if we play the way we play, we play our style of basketball, we can win three games in Las Vegas.”

Thursday's game will be broadcast on ESPN3. Spectators are not being admitted to the Big West Tournament.