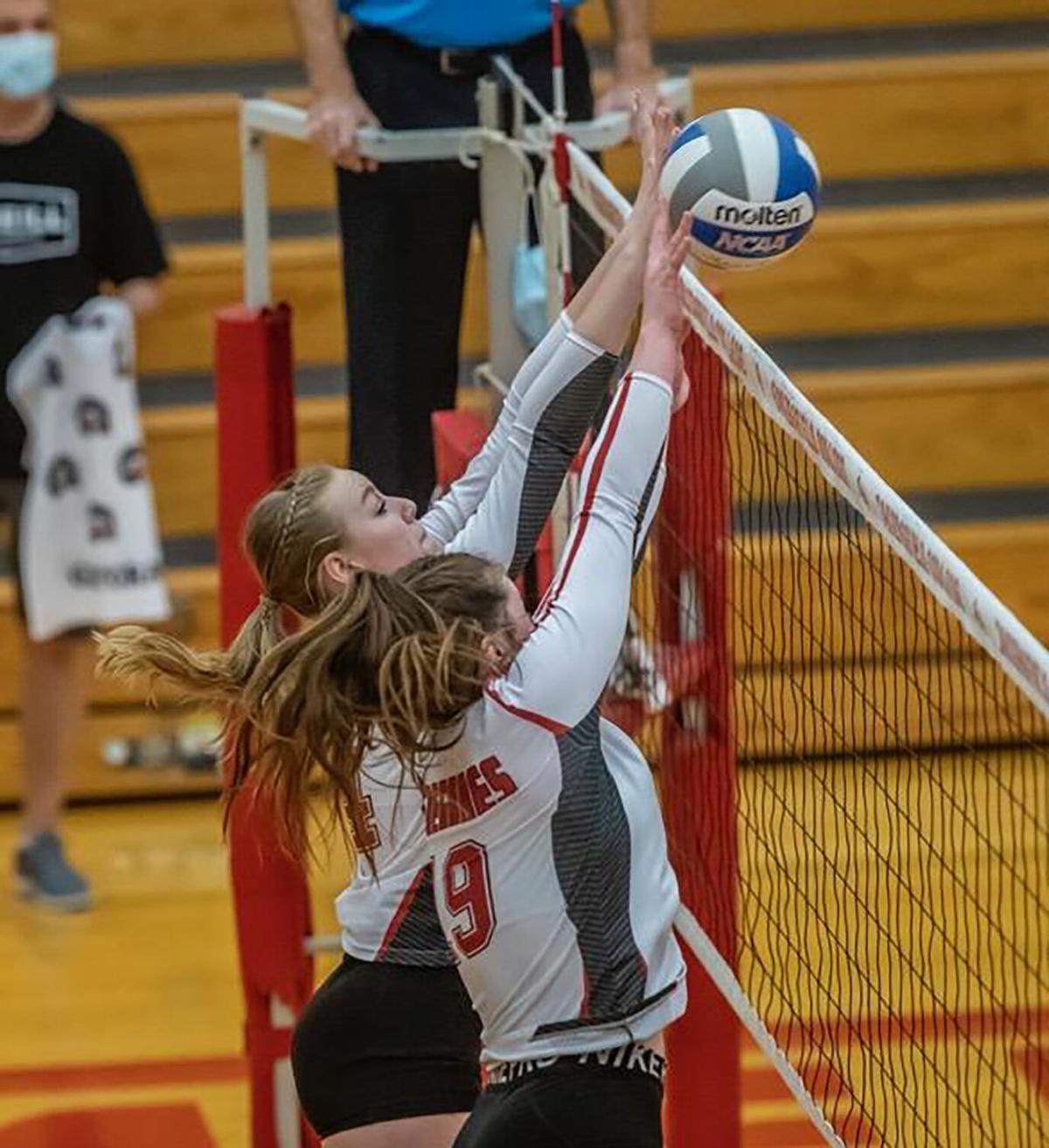 Alyson Dees and Meagan Williams make a play at the net in a recent Bakersfield College volleyball match. 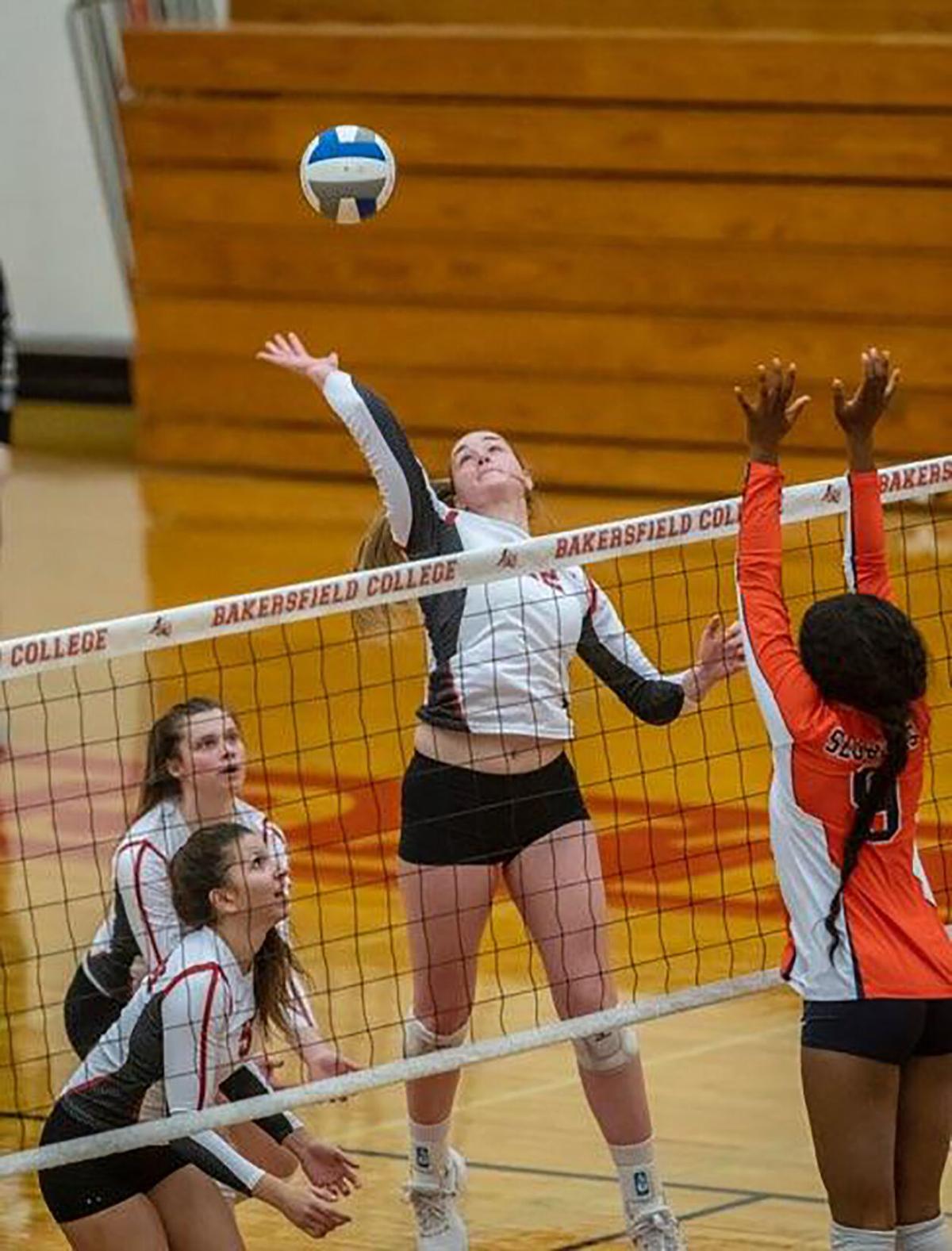 Emily Clark is second on a 6-0 Bakersfield College volleyball team with 59 kills.

Alyson Dees and Meagan Williams make a play at the net in a recent Bakersfield College volleyball match.

Emily Clark is second on a 6-0 Bakersfield College volleyball team with 59 kills.

Even without a postseason to look forward to, Carl Ferreira knew he wouldn't have to work too hard to get his team motivated for the spring.

Like the rest of the CCCAA, Ferreira, a veteran volleyball coach at Bakersfield College, wasn't able to field a team in the fall, as the season was delayed by the COVID-19 pandemic.

And though they were able to return for a shortened spring season, the Renegades, who've gone 35-1 in Western State Conference matches over the last four seasons, came in knowing their season would contain just 10 matches spread out over five weeks with no postseason and no chance to win another conference title.

But, Ferreira says these factors did little to negatively impact his team's motivation.

"You’re doing what you’re doing, always expecting the game to be there, practice to be there, then when it’s taken from you, it really elevates your appreciation and your gratitude for the sport," he said. "Once you get them in the gym, it’s really back to normal. It’s just business as usual.”

Business as usual for this program is consisting of another dominant run through the regular season.

The Renegades enter the week 6-0, having dropped just two sets while getting balanced contributions throughout the roster.

Alyson Dees leads the team with 80 kills, 34 of which came in a pair of weekend sweeps over Taft.

Emily Clark, who moved from middle/opposite hitter to outside hitter this season, is second on the team with 59 kills.

Fellow sophomore Francesca Hernandez is handling the bulk of distribution with 196 assists, while Yuliana Rivera is one of four Renegades with at least 60 digs, recording a team-best 111.

Though they won't get to compete for any championships this spring, a CCCAA ruling that allows all athletes to retain the year of eligibility that would have been used in 2020-21 ensures that the bulk of the current BC roster will be retained in the spring.

Knowing this, Ferreira says it's important to maintain the same culture he's implemented in years past to ensure his players are locked in when they have more to play for next fall.

“I wanted to make it as normal as possible," he said. "This is who we are, this is what we do. We haven’t changed the structure about how we build the team, build chemistry, being responsible mentally for everything we do.”

Though it won't be a conference match, the Renegades will face a familiar foe this weekend. They'll take on WSC South foe Antelope Valley at home Friday and on the road Saturday. Both matches will be at 3 p.m.

The same type of game produced the same result for the Bakersfield College men's basketball team, which earned a pair of overtime wins over Cerro Coso on Thursday and Friday.

After losing a five-point halftime lead, the Renegades, led by a 25-point effort by Tyrell Coleman, found enough juice to get over the hump in overtime, coming home with a 76-73 win.

The Renegades led by as many as 11 the following day, but were just 2.8 seconds away from losing before Rahmel Davis played the hero. Down 59-58, Davis, who scored a team-high 18 points, slashed to the rim, put home a layup and got fouled, securing the 61-59 win with a free throw, pushing BC's record to 3-1 on the young season.

The BC women also secured a three-game win streak, but did so in much easier fashion, routing Taft College 78-28 Thursday and 63-27 Friday.

Eleven of 12 Renegade players scored in Thursday's game, none more than Kathleen Rodriguez, who had 21 points off the bench. The Renegades (3-3) had great balance again Friday, with 10 of 11 players scoring. Brianna Green had 11 points and was one of seven Renegades to score at least six.

• Cal State Bakersfield topped UC Riverside 9-7 on Sunday to clinch a win in its first baseball series as a member of the Big West. One day after hitting a grand slam in a 7-1 win, Nick Grossman drove in three more runs Sunday, pushing the 'Runners to 6-5 overall and 3-1 in league play.

• The CSUB beach volleyball team earned a pair of 5-0 exhibition wins over Vanguard on Saturday. This came two days after the Roadrunners fell 5-0 in a matchup with No. 1-ranked USC.