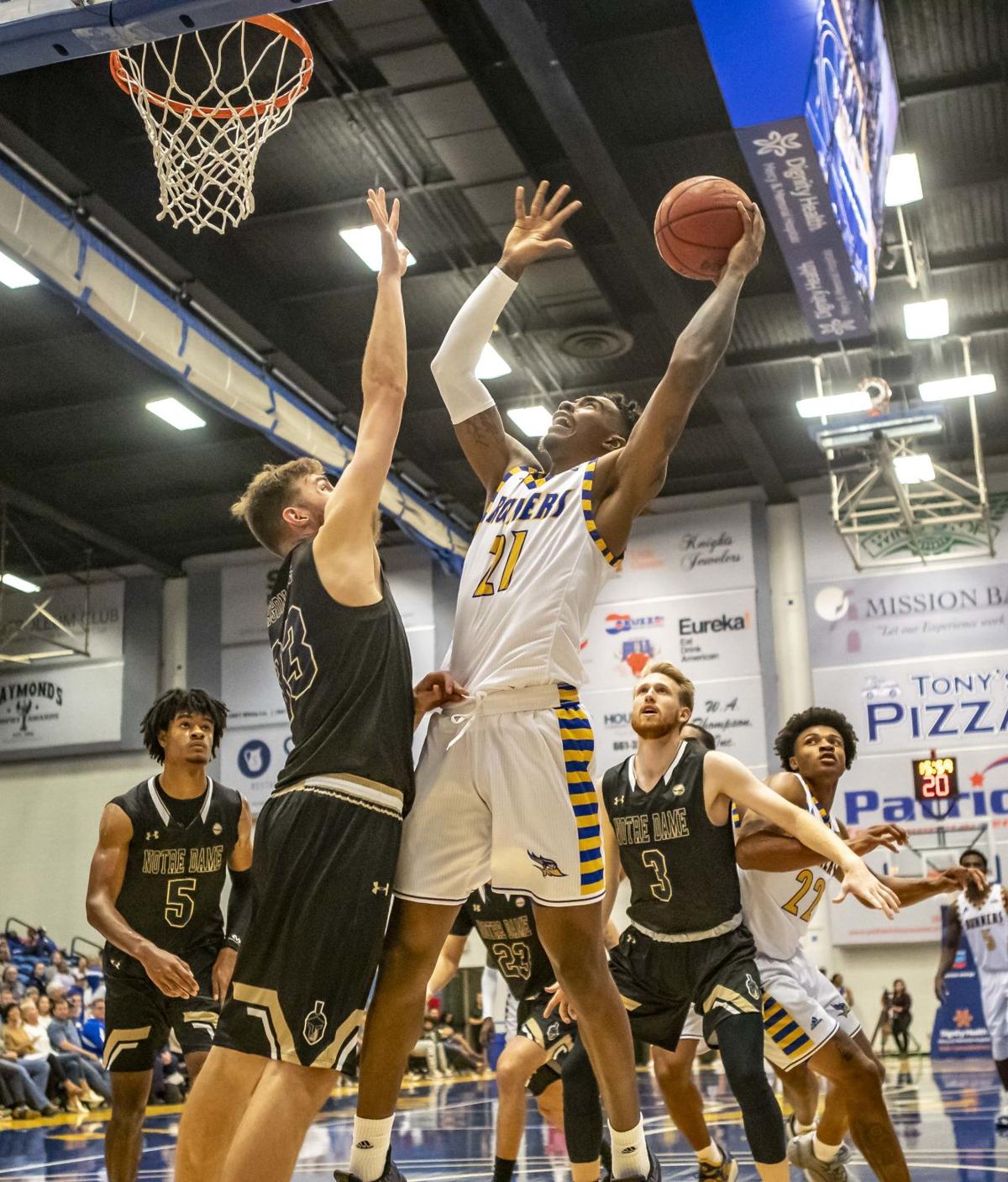 Nick Ellis / For The Californian CSUB's Greg Lee (21) shoots over Notre Dame de Namur's Carl Snyder during the second half of a November game. 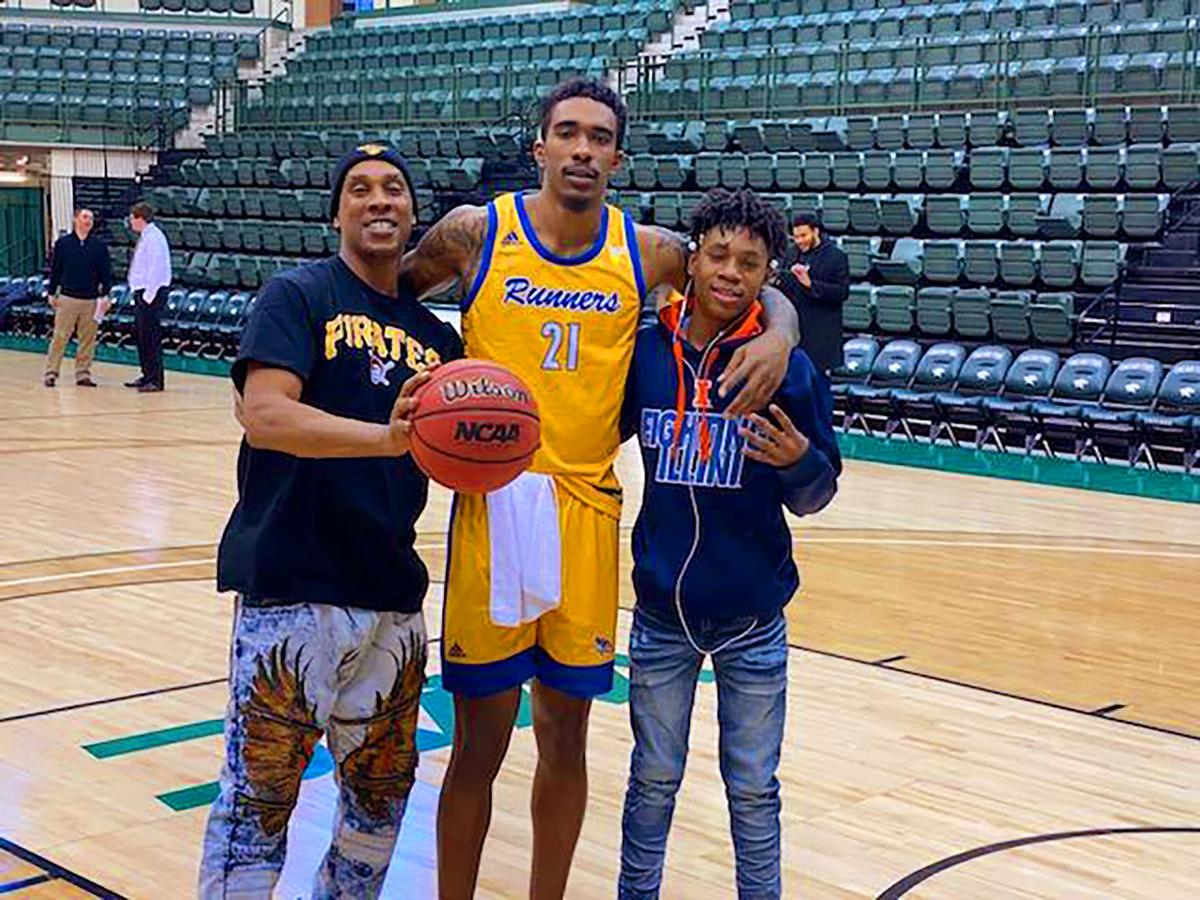 CSUB forward Greg Lee, center, poses for a photo with father Greg Lee Jr. and brother Gerrell Lee after a game at Chicago State. In front of his Rockford, Ill. based family, Greg scored a career-high 19 points in a Roadrunner win at CSU last Sunday.

Nick Ellis / For The Californian CSUB's Greg Lee (21) shoots over Notre Dame de Namur's Carl Snyder during the second half of a November game.

CSUB forward Greg Lee, center, poses for a photo with father Greg Lee Jr. and brother Gerrell Lee after a game at Chicago State. In front of his Rockford, Ill. based family, Greg scored a career-high 19 points in a Roadrunner win at CSU last Sunday.

Though it wasn't exactly what he was expecting, Greg Lee still had a highly rewarding homecoming last Sunday.

Having grown up in nearby Rockford, Ill., Lee, a junior forward on the Cal State Bakersfield men's basketball team, secured tickets for 22 family members for the Roadrunners' scheduled Saturday game at Chicago State.

But when a snowstorm caused the game to be postponed until Sunday, it changed things for members of Lee's religious family, who he says were "not going to miss church, not even for me." As a result, just eight relatives were able to use their tickets.

Those in attendance -- a group that included father Greg Lee Jr., brother Gerrell Lee and grandparents Willie and Annie Graves -- were treated to arguably the best performance of Lee's college career. With the team's top-two scorers limited by injuries, Lee stepped up, scoring a career-high 19 points in a 72-54 win that lifted the Roadrunners to 3-1 in WAC play heading into a Thursday home game against Utah Valley.

Despite the turnout being less-than-expected, Lee says his family still made its presence felt, which helped him relax and find his groove on the court.

"Just knowing they were there relieved any pregame nerves," he said. "It's just a feeling of being home. The cold air, the snow, hearing your family in the background talking the same talk they told you when you were little. It gets you excited and you feel like a kid on the court just excited to play."

A childlike enthusiasm for basketball has served Lee well. Surrounded by violence and facing numerous personal hardships growing up, the game helped him persevere and has put him in a position where he can now help young people enduring the same difficulties he faced.

Lee's time in Rockford was short-lived. Routinely rated as one of the most dangerous cities in America, his mother, Tori Graves, knew she had to get him out of a hostile environment.

"I couldn't raise my son in a place that was so negatively influenced by limitedness," Graves said. "It was horrible."

Knowing she "wanted to be where the weather was warm," Graves found a job in Houston, where she and a six-year-old Greg relocated in 2004.

Problems persisted when the pair arrived in Texas. Struggling financially in a city where she didn't know anyone, Graves said she had to take a sick Greg to work with her on multiple occasions, unable to afford taking a day off to stay home with him.

Crime also proved inescapable. At 14, Lee says he and three friends were held up at gunpoint while waiting to take a bus to school, a traumatic event that leaves him noticeably bothered when discussing it years later.

"Instead of encouraging me at a young age, you decide you want to take something from somebody that's younger," he said. "It's a shame the way people will take advantage of their own people."

Though such a moment could have taken him down a dark road, Lee says it actually helped push him in the the opposite direction.

While the support of his mom -- who says the armed stickup marked "the last time that he ever caught the bus" -- helped keep him on the straight and narrow, Lee also fell back on basketball, which he hoped would take him better places.

Aiming to parlay a standout prep career at Westside (Texas) High School, where he was a two-time All-District player, into a Division I scholarship, he got what he was looking for at CSUB.

After struggling to carve out a role early in his career, Lee has become a key contributor for the Roadrunners in the last two seasons. His workload has increased of late, as he's started each of the last six games, a stretch highlighted by his career-best scoring output at Chicago State.

And while he's found a home in Bakersfield, Lee's heart has remained in Northern Illinois more than 15 years after leaving. His attachment to Rockford is so strong that when he and his teammates are giving two weeks off every summer, he spends that downtime in the city, staying with the family members who still call Rockford home.

While there, he likes to volunteer his time with the local basketball community, often taking his brother and his friends to the local YMCA. After "putting them all through a workout," he attempts to speak with the participants about their lives.

Knowing first-hand the struggles many young people in the community are facing, Lee hopes sharing his experiences can help put them on the right path.

"I try to take any chance I get to talk to a kid and tell them 'I've been in your shoes, I know how it feels,'" he said. "(What I went through) drove me more to help my environment so I can go back to Rockford and give back to the people and show them how to care for one another."

He hopes his community service efforts will only grow over time. Wanting to either play professionally or get into coaching after college, Lee hopes to follow in the footsteps of Rockford native Fred VanVleet, a Toronto Raptors guard and NBA champion who holds an annual backpack and school supplies giveaway in the city.

Saying kids who grow up in low-income, high-crime neighborhoods often have a sense of hopelessness drilled into them at a young age, Lee says it's important for people in positions of influence to change that narrative. He plans to keep working towards becoming one of those people.

"My goal when I'm done with basketball is to go back and start something," Lee said. "A team, a foundation, a program for kids. Something so they can have hope. And that's what we need in this world."