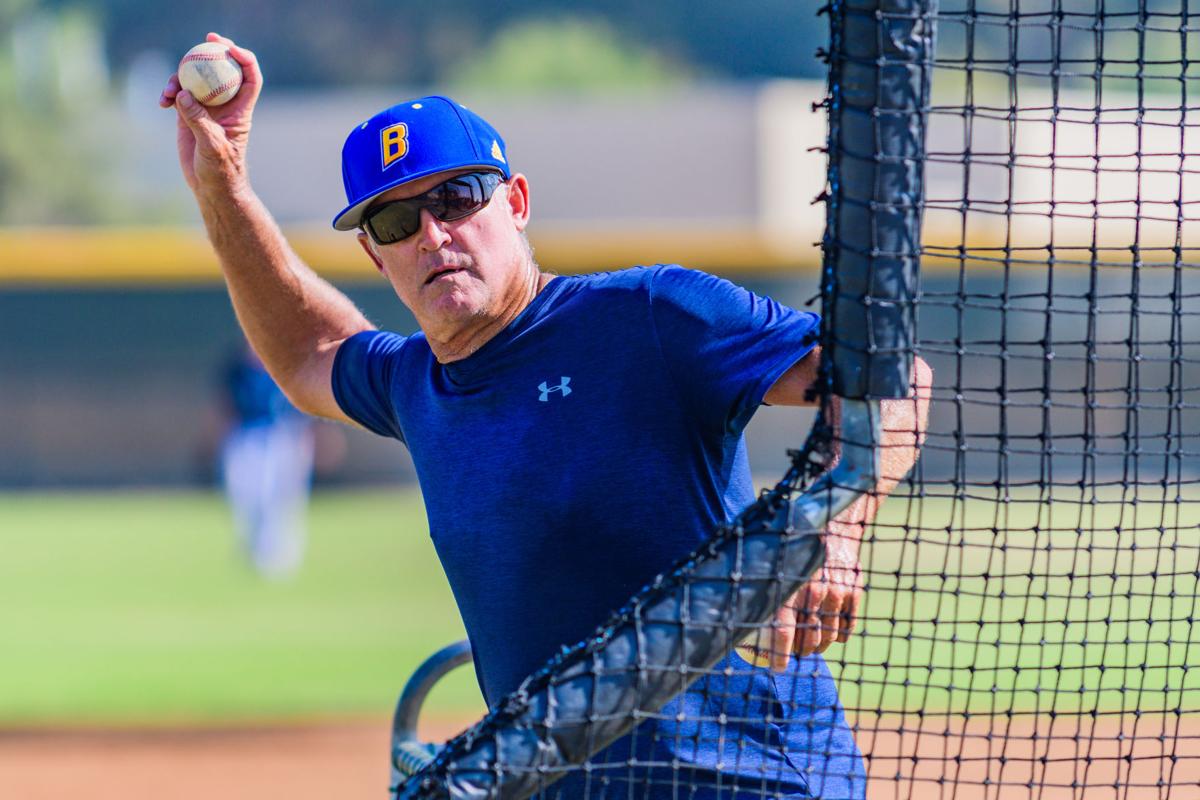 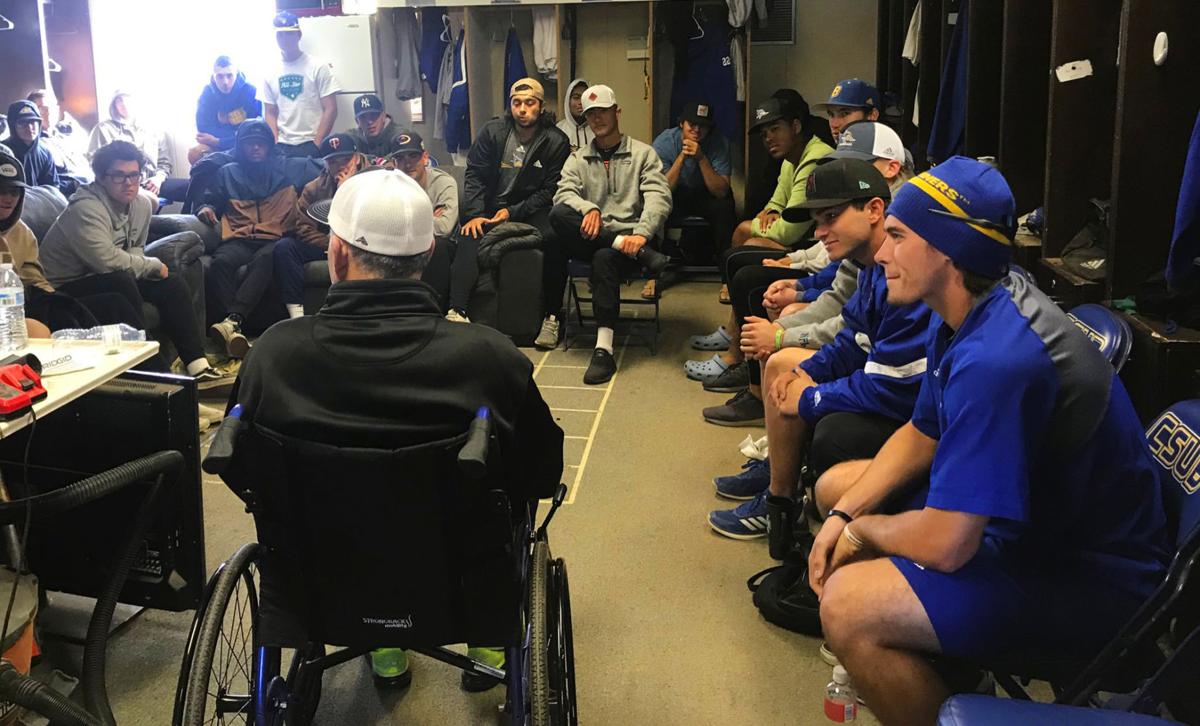 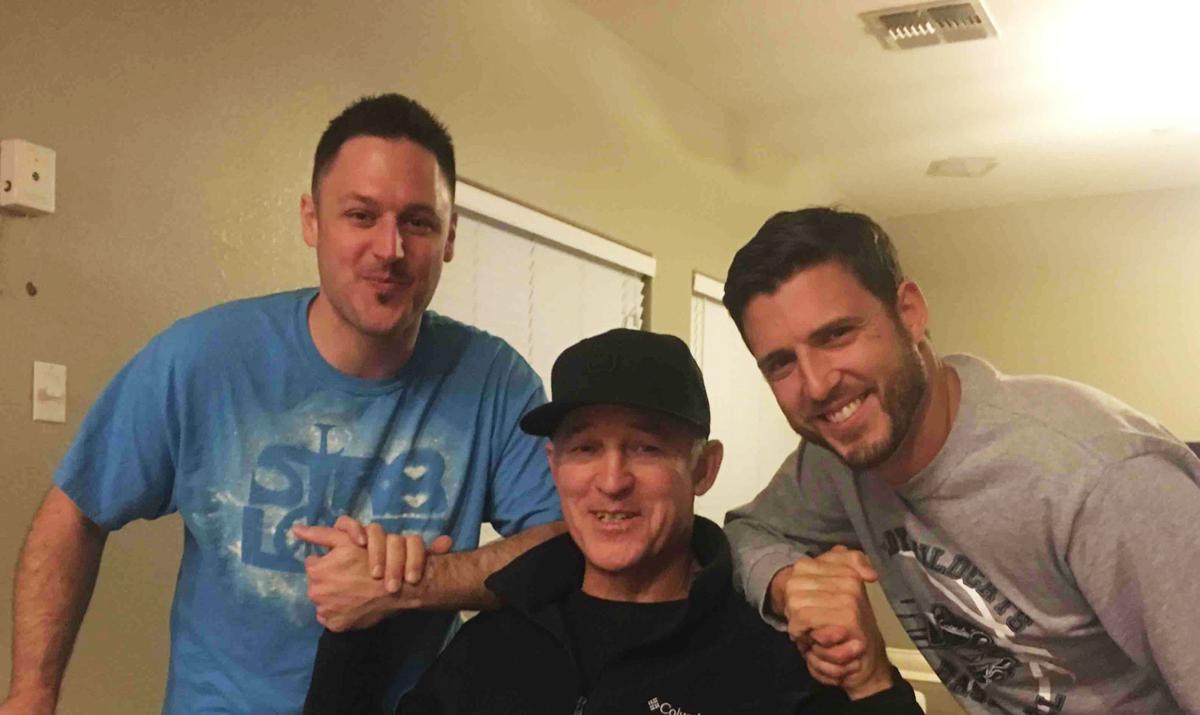 CSUB players and coaches pose with Steve Farrington after he visited the team just before Thanksgiving.

CSUB players and coaches pose with Steve Farrington after he visited the team just before Thanksgiving.

A lengthy road trip was long overdue for Steve Farrington.

Still in the process of recovering from a near-fatal car crash, Farrington, a baseball, football and softball coach with over 40 years experience, had spent more than six months confined to small areas.

For roughly three months after the accident, he rarely got to go outside unless he was being transferred from one hospital to another. After being discharged in late July, he moved in with his son Tyler in Peoria, Ariz., where he began a rigorous physical therapy regimen with the hope of regaining full mobility in his legs.

So when his doctors informed him that he had progressed enough to travel, he and Tyler had more than a short drive around the block in mind.

Initially, the plan was for Tyler to drive Steve 1,200 miles to Salem, Ore., to visit Steve's mother Joretta Farrington. But with so much open road in front of them, an idea was hatched.

Using a GoFundMe page he created to help with medical expenses, Tyler sent out a message trying to arrange visits with anyone wanting to get together with Steve, who hoped to see old friends to "let them know I'm still alive."

The end result was a 10-day, 3,500-mile jaunt up and down the west coast, in which Tyler says "literally every team (Steve's) ever been a part of had some sort of representative" who was able to spend time with their former coach.

The meet ups included a lunch in Seattle with former baseball players at Washington State University, where Steve coached from 1995 to 2000, and a get together with members of the 2005 Tri-Cities Fever, who won the National Indoor Football League championship in their inaugural season with Steve as a defensive backs coach.

It also featured a swing through Bakersfield, where Steve spent the 2019 season as CSUB's Director of Player Development.

On Nov. 25, he spoke with Roadrunner players and coaches for more than an hour, giving updates on his recovery and enjoying conversations with people he hadn't seen in months.

CSUB head coach Jeremy Beard, who previously coached with Farrington at Columbia Basin College (Wash.), says there was a feeling of great relief in the clubhouse as players got reacquainted with a coach many feared they'd never see again.

"It was a special day for all of us," said Beard, who's known Farrington for more than 20 years. "The kids were extremely exited to have him back. He made a big impact on our players in a short time throughout last season."

Getting a first-hand view of the impact Steve's had on former players had an emotional effect on his family.

"You don't really get these types of receptions and memories for a person until you go to their funeral," Tyler said. "We saw his whole history from everywhere he's coached. He's really got to live through people showing their love and reaching out. It was just a really neat experience. A celebration of life."

For Steve, who turned 68 on Nov. 30, there's still plenty of living to do, and he has a very specific end goal for his recovery.

"It's about getting back at it," he said. "Getting back to baseball."

He remembers nothing of the weekend series the Roadrunners played at Grand Canyon, nor does he recall visiting family members who live near GCU's Phoenix campus.

He also has no recollection of the high-speed crash near Needles, Calif. on May 6, which Tyler says left him "essentially dead at the scene."

Tyler suspects the accident was the result of the pneumonia his father was diagnosed with after his admission to the hospital, saying Steve was "coughing uncontrollably" the night before the accident.

Regardless of the cause, family members were preparing for the worst.

"The prognosis was that he probably won't live and if he does, 90 percent of the people with the severity of his injuries are complete vegetables," Tyler said.

The news was "a tough, tough pill to swallow," for players like Evan Berkey.

"I didn't think it was real," said Berkey, now a junior shortstop at CSUB. "To see that strong of a man be in the hospital so long and not knowing if he was going to be with us anymore, it just didn't seem real."

Luckily, Steve's fighting spirit, one those in his inner circle were quite accustomed to, stayed with him as he struggled to regain consciousness.

On his third day in the hospital, he briefly opened his eyes and was able to respond to commands like "give a thumbs up." By the ninth day, he was breathing on his own.

All the while, friends and family were by his side to witness the highlights of his recovery.

While on a recruiting visit in Arizona, Beard paid a visit to Steve. Sitting at the side of his bed with sons Tyler and Brady Farrington in the room, Beard says Steve stared at him intently, clearly trying to say something. After about 30 seconds, he asked his friend a simple question: What happened?

"His kids explained it and there were some tears," Beard recalls. "At that moment he actually came out of it. It was a really special time."

Since then, his progress has only improved.

After moving in with Tyler in July, Steve has gotten into a daily exercise routine. With the rest of the family still asleep, Steve makes 100 trips around the house on a walker, moving an estimated distance of 1.5 miles.

From there, he does numerous workouts to help repair "several tears" in his right arm.

“For the most part, it’s one of those things where I’m trying to get where I can do a lot of the normal stuff by myself," Steve said.

A return to normalcy for Steve wouldn't be complete without coaching. And to the surprise of many, an opportunity has already presented itself.

In his first year as the varsity baseball coach at Valley Vista High School in Surprise, Ariz., Brady Farrington has brought his dad into the fold in an advisory role. Though he can't get in the dugout, Steve often sets up shop in the bullpen, instructing Valley Vista pitchers from a motorized cart.

Even if the situation isn't what they were expecting, family members say it's been a wonder to see Steve back in one of his most natural environments.

"Helping people through athletics and teaching is his passion," Tyler said. "He lives it every day. He gets up every day motivated with a great attitude and those are the characteristics that have helped him pull through."

'It's just a matter of getting there'

Despite his great early progress, Steve is a long way from being fully recovered.

Though some mobility has returned, his legs haven't healed enough to where he can stand without assistance. He'll also need to pass a brain examination before he's allowed to get behind the wheel of a car again.

But as he begins a new physical therapy regimen, consisting of two, three-hour sessions a week, he expects to, quite literally, be back on his feet shortly.

Whether coaching with his son or returning to Bakersfield, where Beard says "he's always welcome to have a spot on my staff no matter what," Steve intends to stick around the game as long as his health allows.

"I don't know (how long) it's going take me, but I know that I want to be able to function myself and do things by myself," he said. "Then I can help other people because of what I'm able to do with myself.

"I think I can still teach, still coach. It's just a matter of me getting there."

Congratulations on a great recovery. He must have done a good job raising hid son to set this trip up. Have fun!