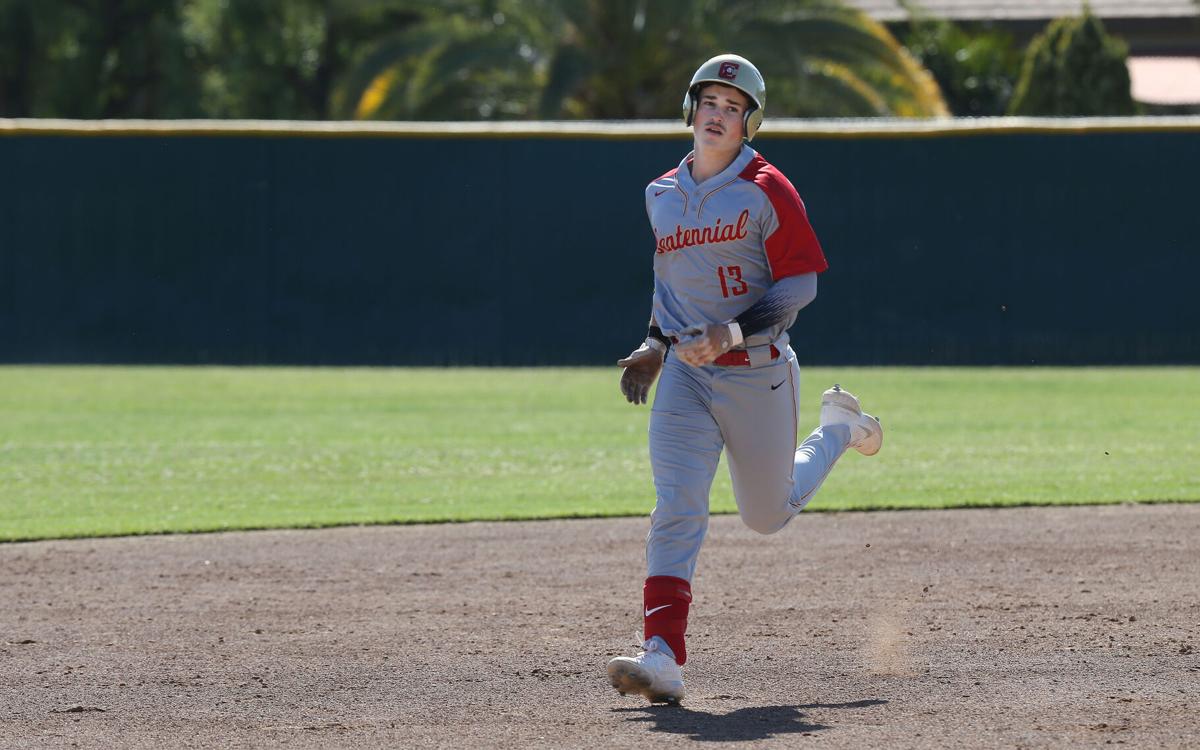 Centennial's Spencer Jenkins runs the bases after a solo home run against at Liberty on Tuesday. 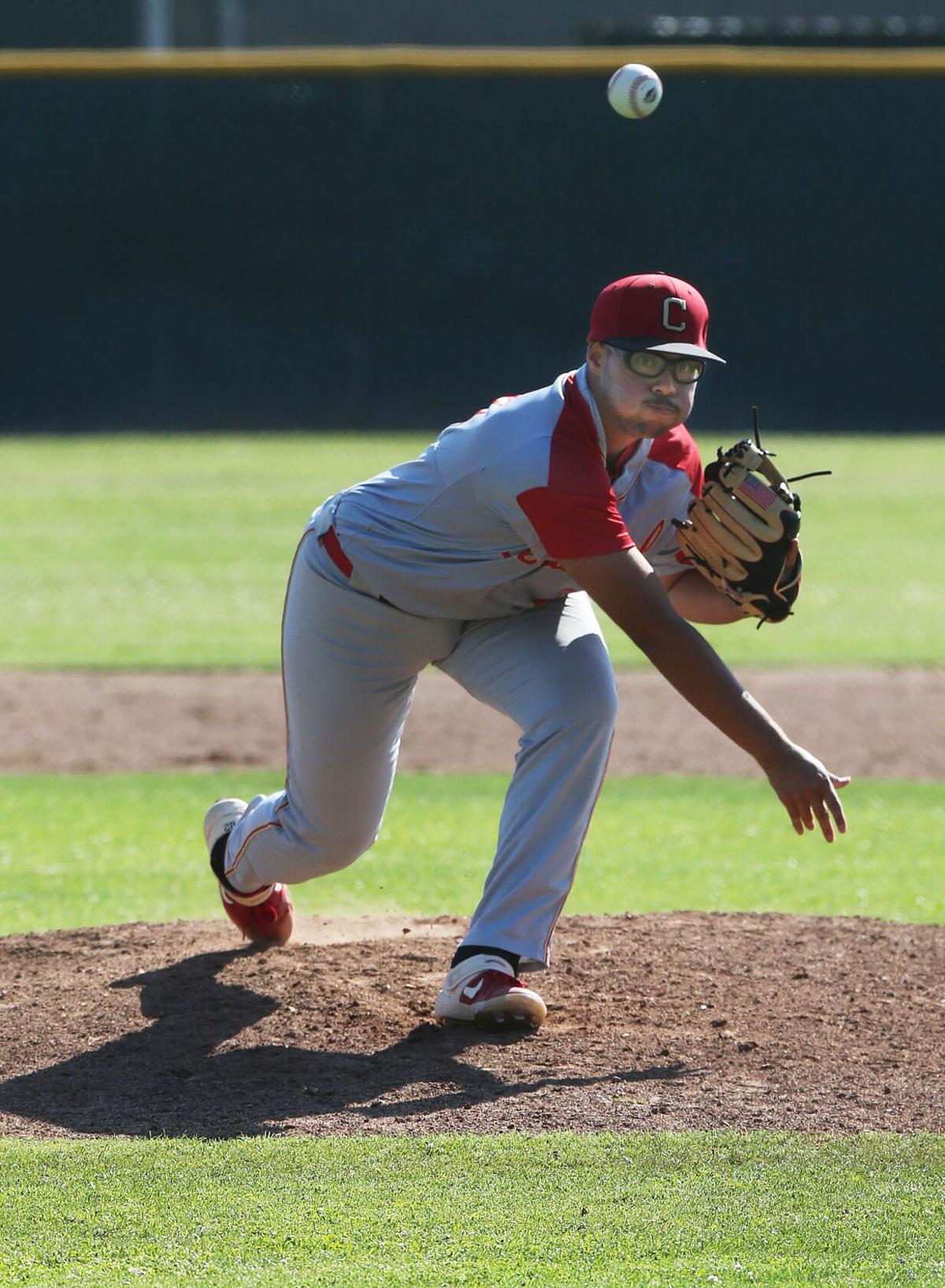 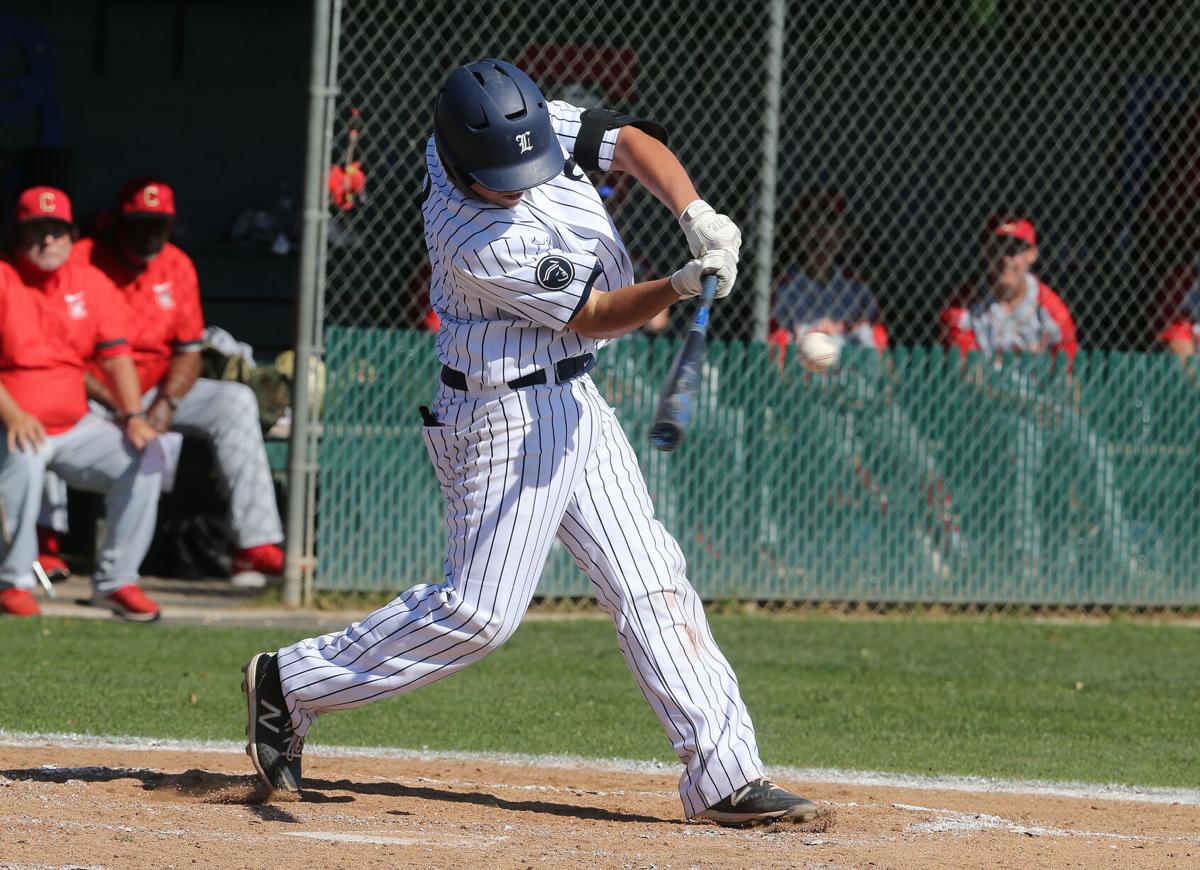 Liberty batter Cooper Gerecke connects on a pitch against Centennial on Tuesday afternoon at Patriots Field. 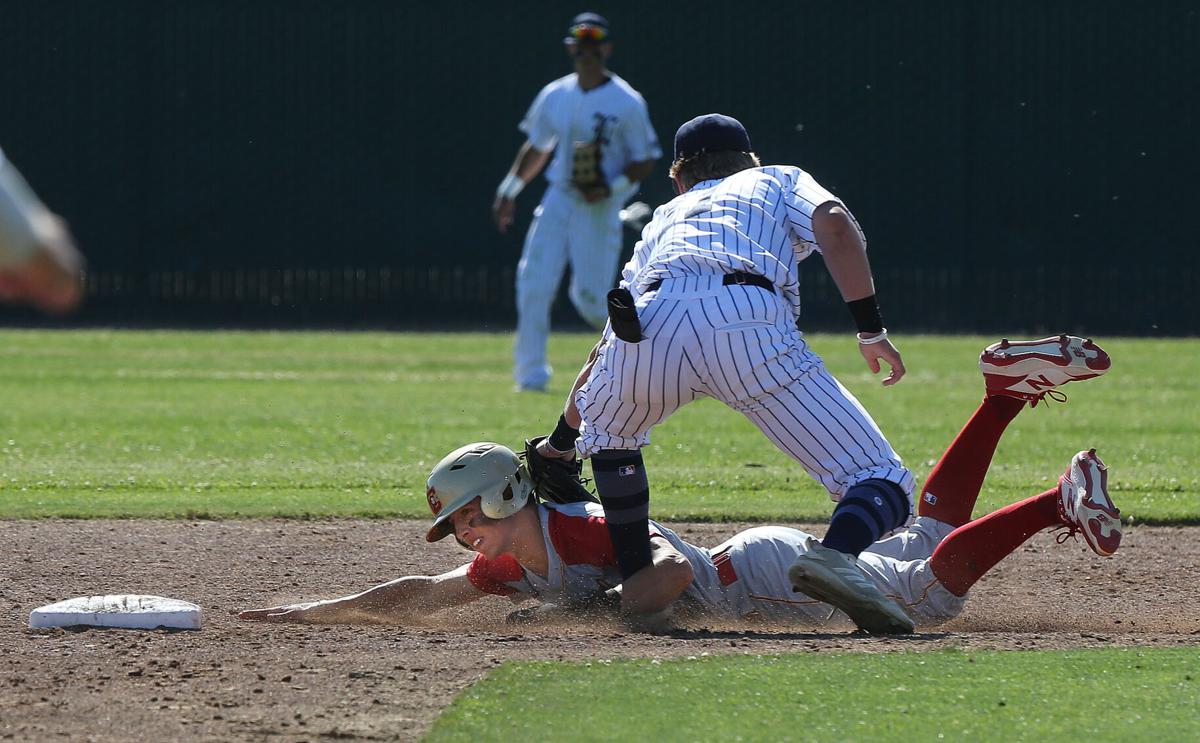 Centennial baserunner Tanner Forbus is tagged out by Cutter Coffey on an attempted steal of second base at Liberty on Tuesday afternoon. 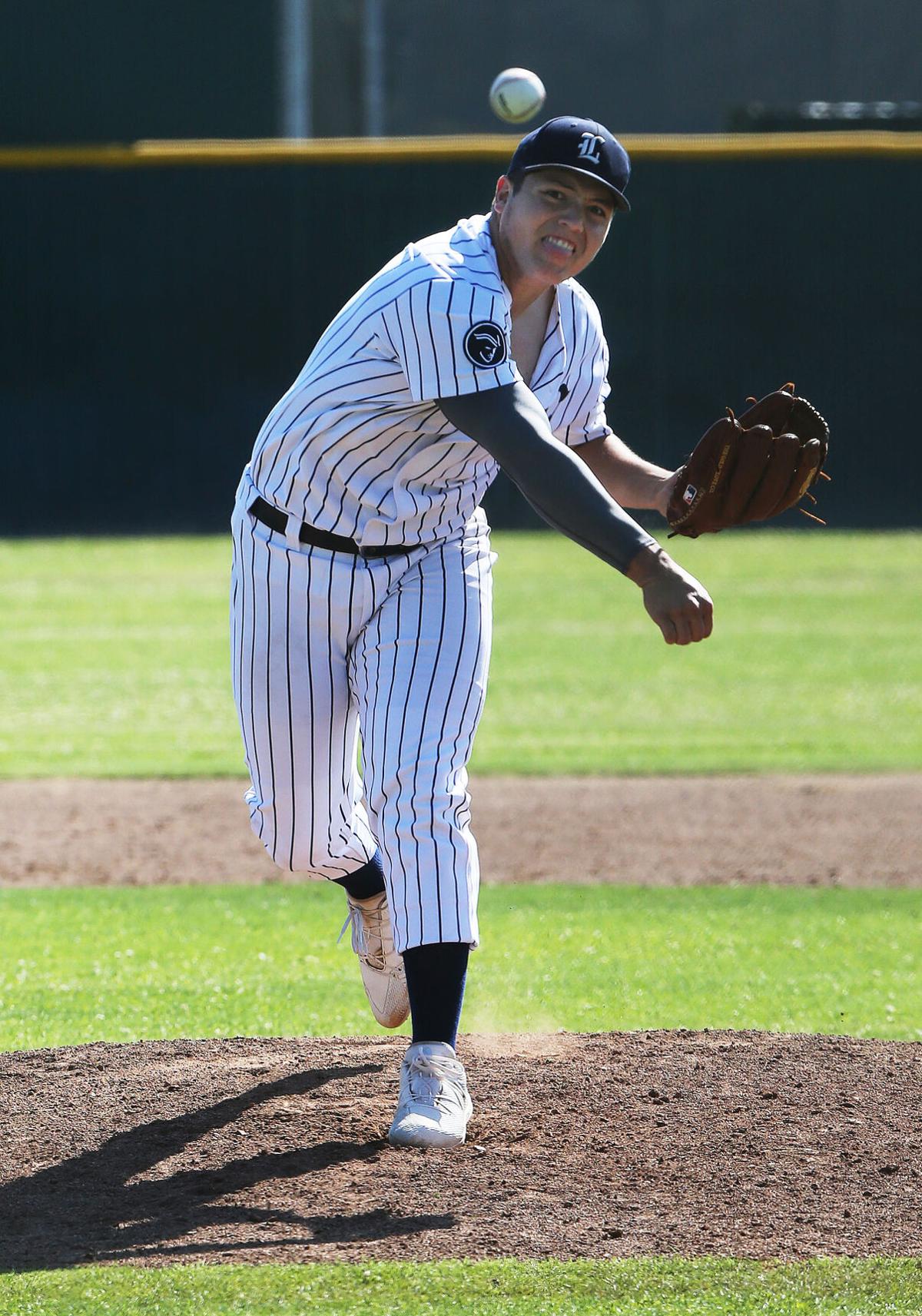 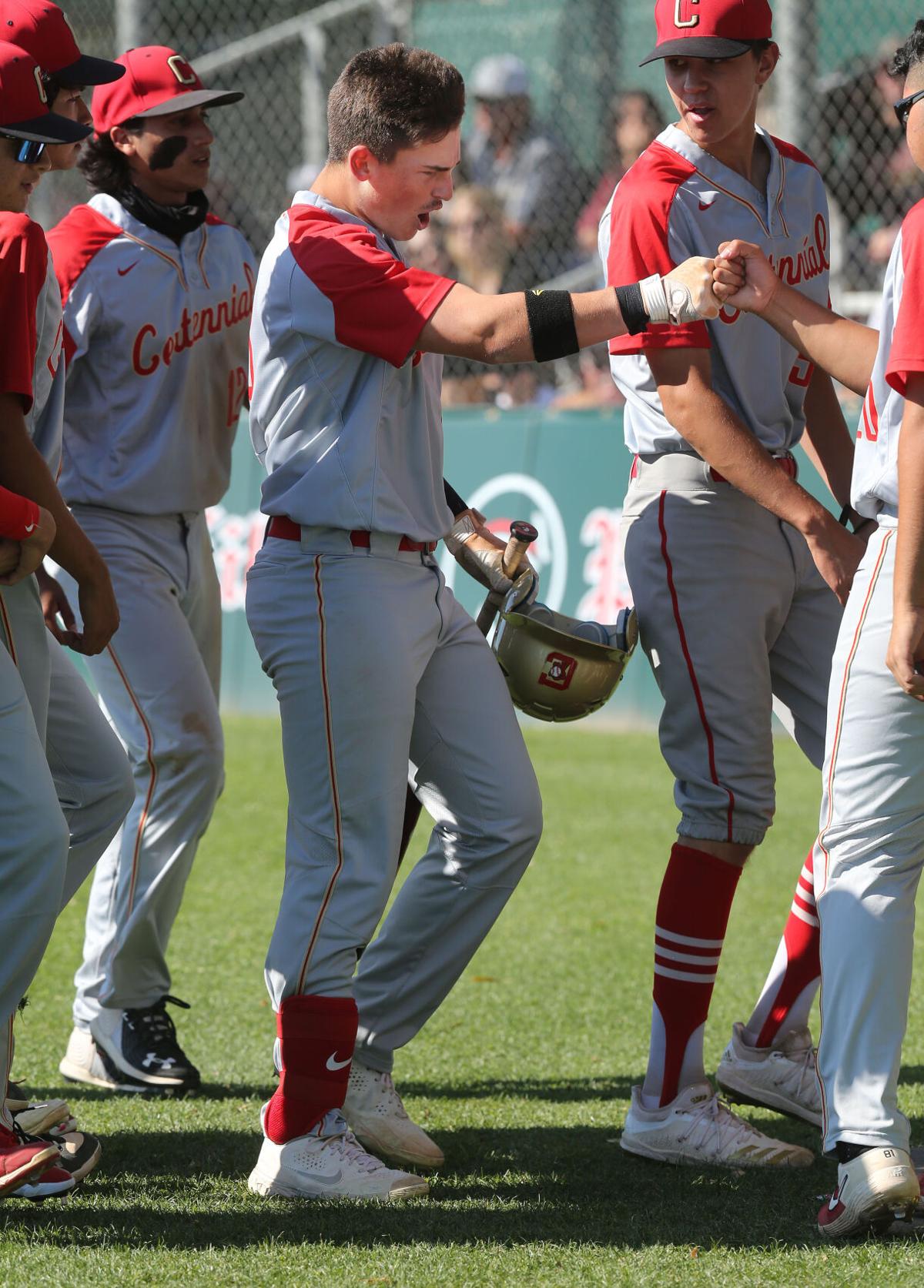 Centennial baserunner Spencer Jenkins celebrates with teammates in the third inning after hitting a solo home run against Liberty on Tuesday afternoon. 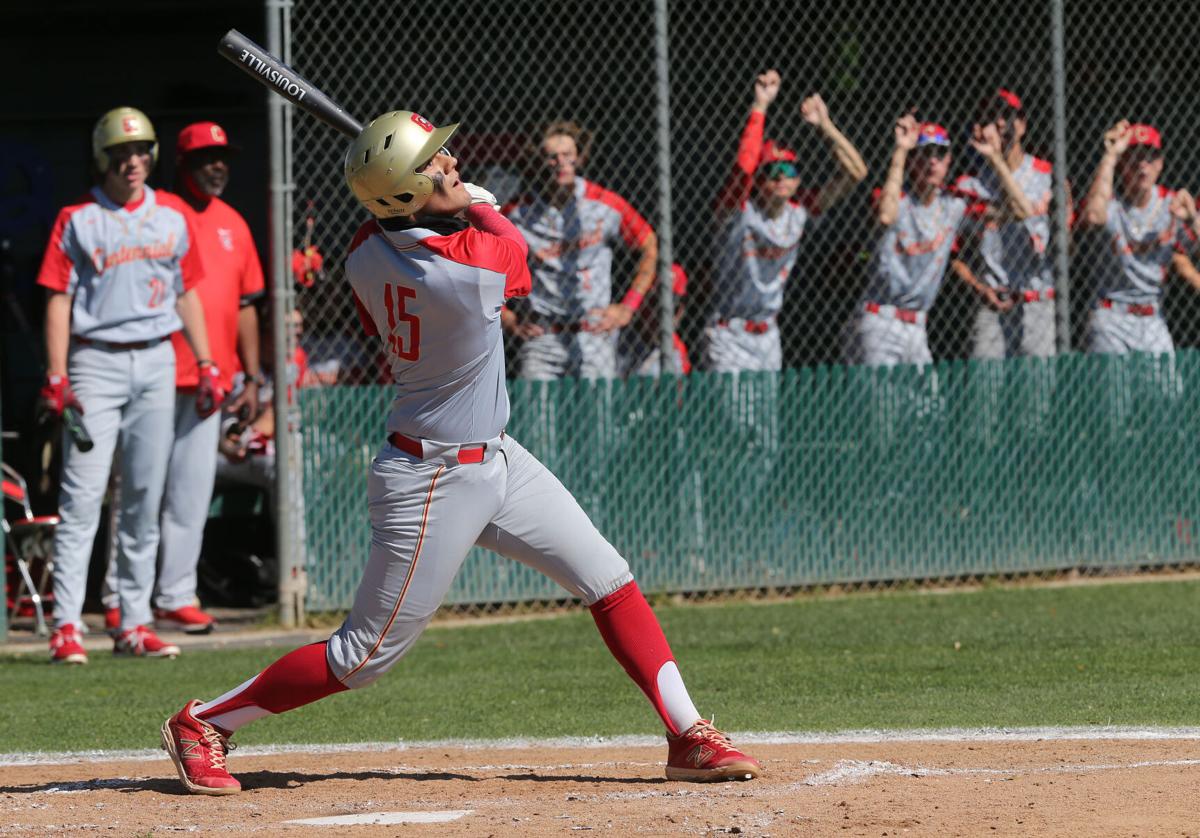 Centennial's Spencer Jenkins runs the bases after a solo home run against at Liberty on Tuesday.

Liberty batter Cooper Gerecke connects on a pitch against Centennial on Tuesday afternoon at Patriots Field.

Centennial baserunner Tanner Forbus is tagged out by Cutter Coffey on an attempted steal of second base at Liberty on Tuesday afternoon.

Centennial baserunner Spencer Jenkins celebrates with teammates in the third inning after hitting a solo home run against Liberty on Tuesday afternoon.

In a battle of local baseball heavyweights, round one went to Centennial on Tuesday afternoon at Liberty.

Senior right-hander Jordan Mora pitched a complete game and Drew Townson hit a grand slam as part of a six-run fifth inning as the Golden Hawks remained unbeaten with an 8-2 victory at Patriots Field.

“We know any time we play opponents in our league it’s going to be a tough ballgame,” Centennial coach Dan Durham said. “And Liberty’s very well-coached and has a lot of talent so I knew it was going to go down to the last out. And you just never breathe a sigh of relief until that last out is recorded.”

The Golden Hawks (7-0, 4-0 SWYL) wasted little time getting started. Lead-off hitter Korey Likens ripped the first offering of the game off the left-field fence for a double. But the knockout blow for Centennial didn’t come until several pitches later — No. 83 to be precise — a curveball by Patriots starter Jacob Tobias (2-1).

Leading 2-1, the Golden Hawks sent 10 batters to the plate in the fifth, with the big blow coming on a grand slam by Townson that chased Tobias and gave Centennial a 6-1 lead.

“That wouldn’t have been possible if my teammates hadn’t gotten on base,” Townson said. “The at-bat before (Tobias) threw me two curveballs and I missed the second one a little bit, and I figured it was coming again. I wasn’t sitting curveball, but I saw it there and took a good pass at the baseball.”

“They really played well,” Liberty coach Tony Mills said. “Not only did they pitch exceptionally well, they played outstanding defense and had timely hitting. They won in all phases of the game today.”

A pitchers’ duel through the first four innings, Centennial led 2-1 before blowing the game open.

Likens scored the opening run on a sacrifice fly in the first by Spencer Jenkins, and then led 2-0 when Jenkins hit a solo home run in the third, his third of the year.

The Patriots (5-1, 3-1) rallied with two outs in the bottom half of the third. Cutter Coffey hit a solo home run — his second of the year — and Tobias just missed a home run to right field, hitting one off the fence for a stand-up double. He moved to third on an error, and Kaleb Dickey followed with a walk.

But Mora (3-0 with a 0.58 ERA), as he had all game, was up for the challenge. He enticed Owen May to ground into a force out to end the inning. Mora also received plenty of help from his defense. Golden Hawks turned a 6-4-3 double play to end a rally in the fourth and second baseman Kaden Solf made a diving stop on a ball headed to right field in the sixth.

“It felt good and my defense was helping me,” said Mora, who added that his curveball was working well. “They put their lives on it. I was just trying to keep the ball down so I could get grounders so I could get more innings in.”

Mora, who gave up a run in the seventh on an infield hit by Brady Torrigiani and a double by Brady Reynolds, limited Liberty’s powerful lineup to seven hits, walking two and striking out four. He struck out Coffey to end the game, his 93rd pitch. Torrigiani and Tobias had two hits apiece for the Patriots.

“Our kids stepped up in every facet of the game,” Durham said. “Jordan Mora threw an unbelievable game against a very talented hitting lineup. Our defense helped him out tremendously and we just got some big hits down the stretch … things just went our way today.”

Jenkins, Solf and Tanner Forbus each had two hits for the Golden Hawks, who will host Liberty on Thursday in Game 2 of the teams' three-game series this season. Their final matchup of the season between the two is scheduled for Tuesday at Liberty.

“A lot of things factor into a baseball game,” Mills said. “You have a little luck every now and then, and we did hit some balls hard, but when you get beat 8-2, the better team won today.”