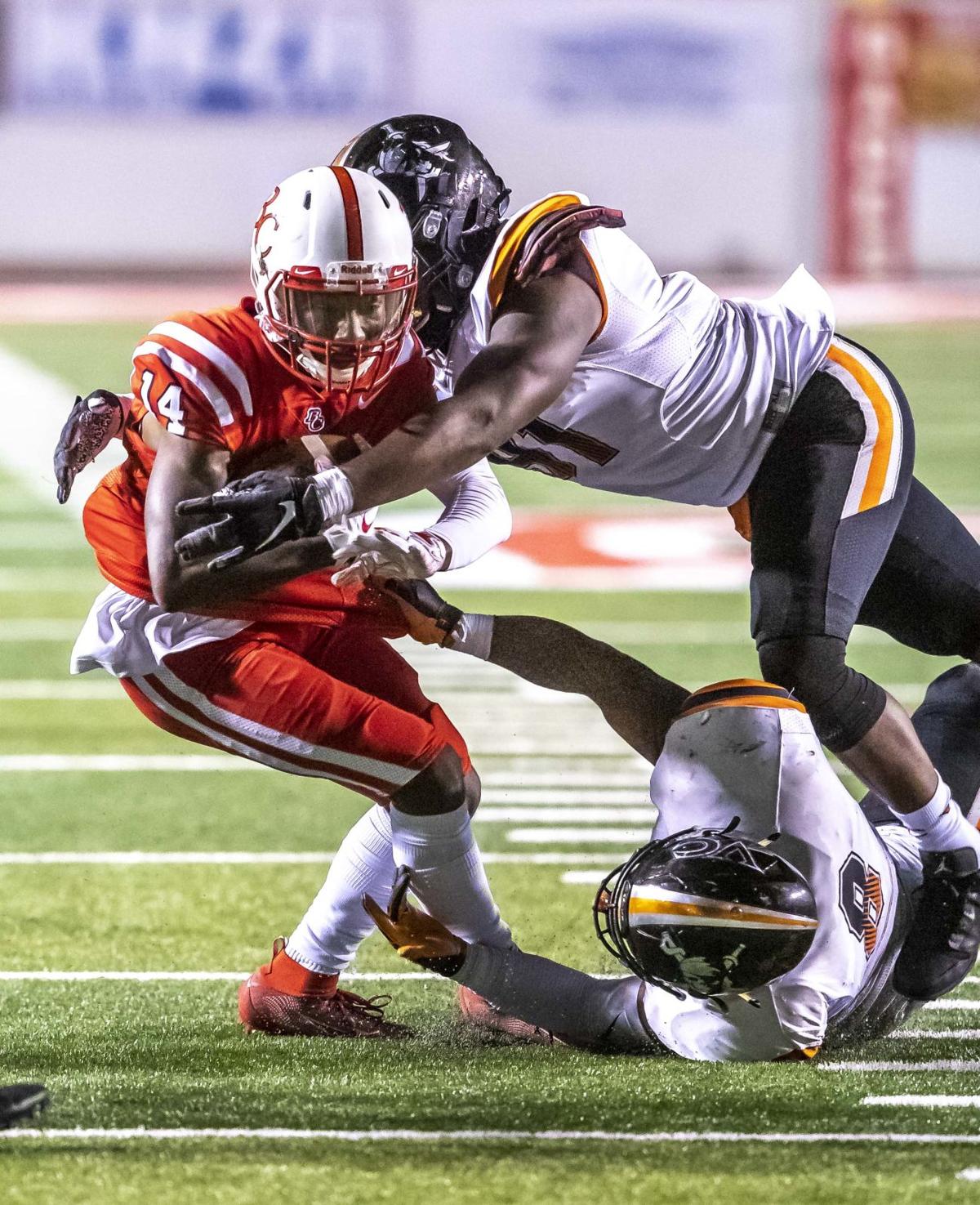 BC's Myran Randle (14) works for yardage as Ventura's Kam Harvey (81) and Praise Williams go for the tackle during the second half of a game last season at Memorial Stadium. 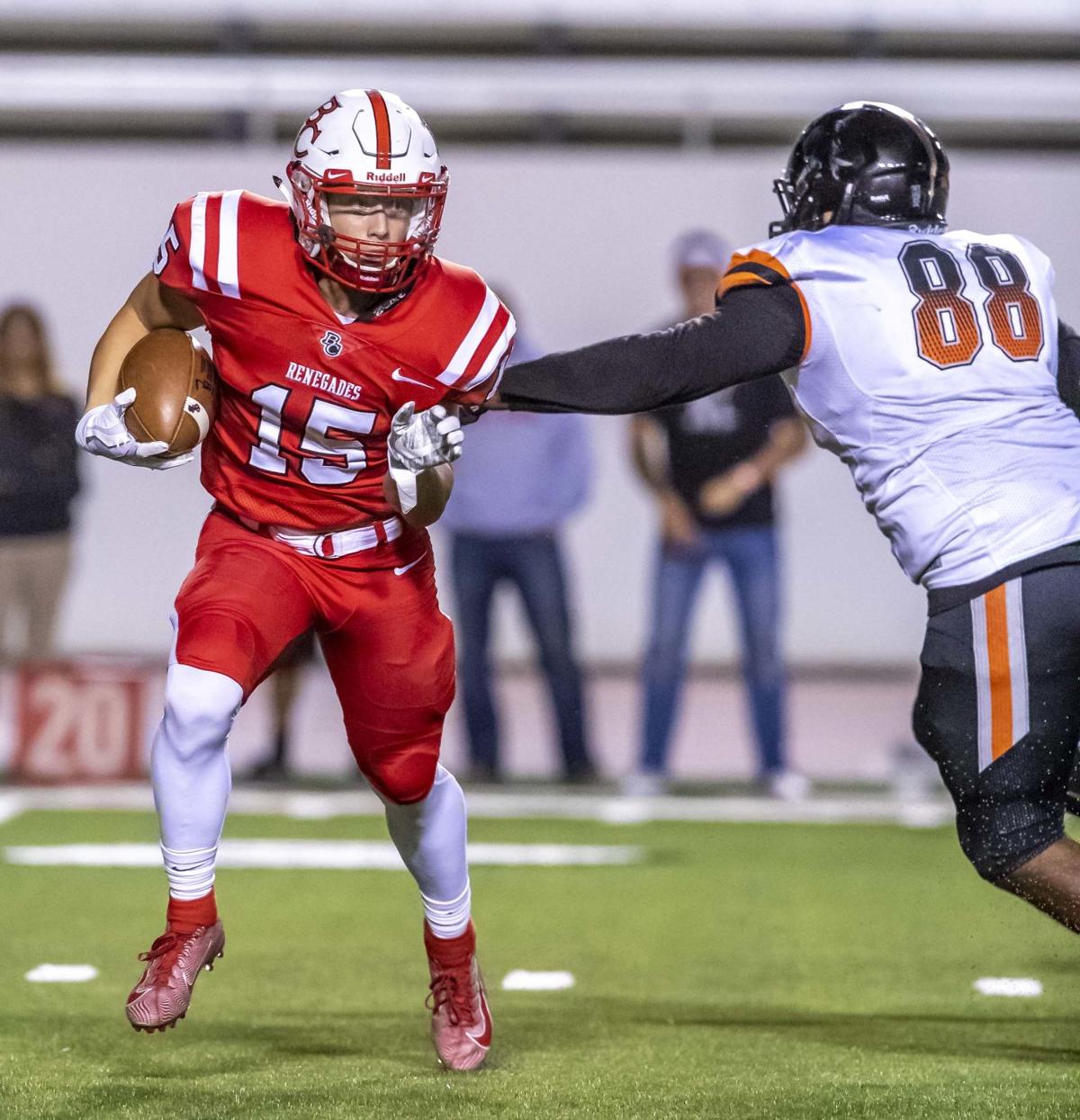 BC's Cole Beaty (15) avoids Ventura's Martez Morton during the second half of a game last season at Memorial Stadium.

BC's Myran Randle (14) works for yardage as Ventura's Kam Harvey (81) and Praise Williams go for the tackle during the second half of a game last season at Memorial Stadium.

BC's Cole Beaty (15) avoids Ventura's Martez Morton during the second half of a game last season at Memorial Stadium.

While it may be still a work in progress and there are many specifics that still need to be ironed out, the California Community College Athletic Association is planning to have a sports season for the 2020-21 school year.

That was the consensus following the CCCAA Board of Directors virtual meeting Friday morning.

The Board voted 15 to 5 in favor of a provisional plan that features four target dates to determine how and when sports will return to the state’s junior college campuses.

“We are very encouraged by the news of today’s CCCAA Board of Directors meetings,” said Bakersfield College Athletic Director Sandi Taylor, who is retiring effective June 25. “While there remain challenges, it is great news for all our coaches and student athletes to know that the 2020-21 year of sports are still on at this point.”

Some of the areas of concern centered around budgets and scheduling, the availability of enough training staff, how or if seasons could include regional and state championships and the coordination with the CCCAA member schools and county health officials.

The board members assigned a task force to research more information before making a final recommendation next Friday.

The two-hour meeting included statements, recommendations and questions from several college representatives from around the state, and each had their own opinion about the viability of the proposal that included Plans A, B, C and D.

The one constant was that each season would be abbreviated, decreasing the number of games or events by 25 percent. There was also a recommendation to eliminate regional and state championships, with the seasons ending with conference championships.

Regardless of the specifics, local junior college coaches were happy to see playing games was even a possibility.

“So that’s good, because I know looking back even a month and a half ago, it wasn’t so much when, it was if we’re going to have (have a season),” Renegades football coach R. Todd Littlejohn said. “Anytime you move to a when and then you have discussions and are trying to work things out and what do we need to do? … They’re going about it the right way and we’ll have an answer next week.”

Although the plan is expected to be modified before the final vote, and even then it can be changed based on the current health situation, it gave school officials plenty to talk about.

Under Plan A, the fall sports season would proceed as originally scheduled, with the exception of basketball, which would be moved to the spring. Football could start practicing on Aug. 10 with a schedule with one scrimmage and 8 games beginning Sept. 4 and ending Nov. 7. Wrestling, women’s volleyball and golf, soccer, cross country and water polo could all start practicing on Aug. 15, start competition on Aug. 27 and end Nov. 7.

Basketball, baseball, softball, track and field, tennis, men’s golf, swimming and diving, men’s volleyball, beach volleyball and badminton would start practice on Feb. 15 with the season running from March 1 to May 11. The plan would be in place until July 10, at which point the plan could remain in place or move to Plan B, depending on the number of COVID-19 cases.

If Plan B is necessary, all the fall sports would be pushed back three weeks, with the seasons ending Nov. 21. The spring season would be the same as in Plan A. The plan would be reviewed on Aug. 3 to determine whether to proceed or to move to Plan C.

Plan C is a bit more complicated, with several sports changing seasons. Women’s volleyball , women’s golf, cross country, tennis, swimming and diving and badminton would stay in the fall with the same start and finish date as in Plan B. Football, Basketball, wrestling, soccer and water polo would start practice on Feb. 15, open their seasons on March 1 and end on May 8. Baseball, softball, men’s golf, track and field, men’s volleyball and beach volleyball would start practice March 15, with games running April 1 through June 6. The plan would be reviewed again on Aug. 17 to determine whether conditions are safe enough to proceed or move to Plan D.

The key point through the entire meeting is that these plans are not set in stone. They are considered a moving target that will continue to be reviewed and updated based on how the COVID-19 restrictions progress.

“At one point in listening to the meeting I wasn’t sure what direction they were going, but it was nice at the end where they all agreed that they do want to have a fall sports season,” Littlejohn said. “Now it’s just a matter of making all the provisions and the arrangements to get that done. So that’s promising. Above all else, that’s what I wanted to hear.”