Bakersfield Christian High School quarterback Dominic Gamboni was one of several players who spoke Thursday during a community-wide celebration for the school's varsity football team, newly titled state champions for CIF Division 3-A. 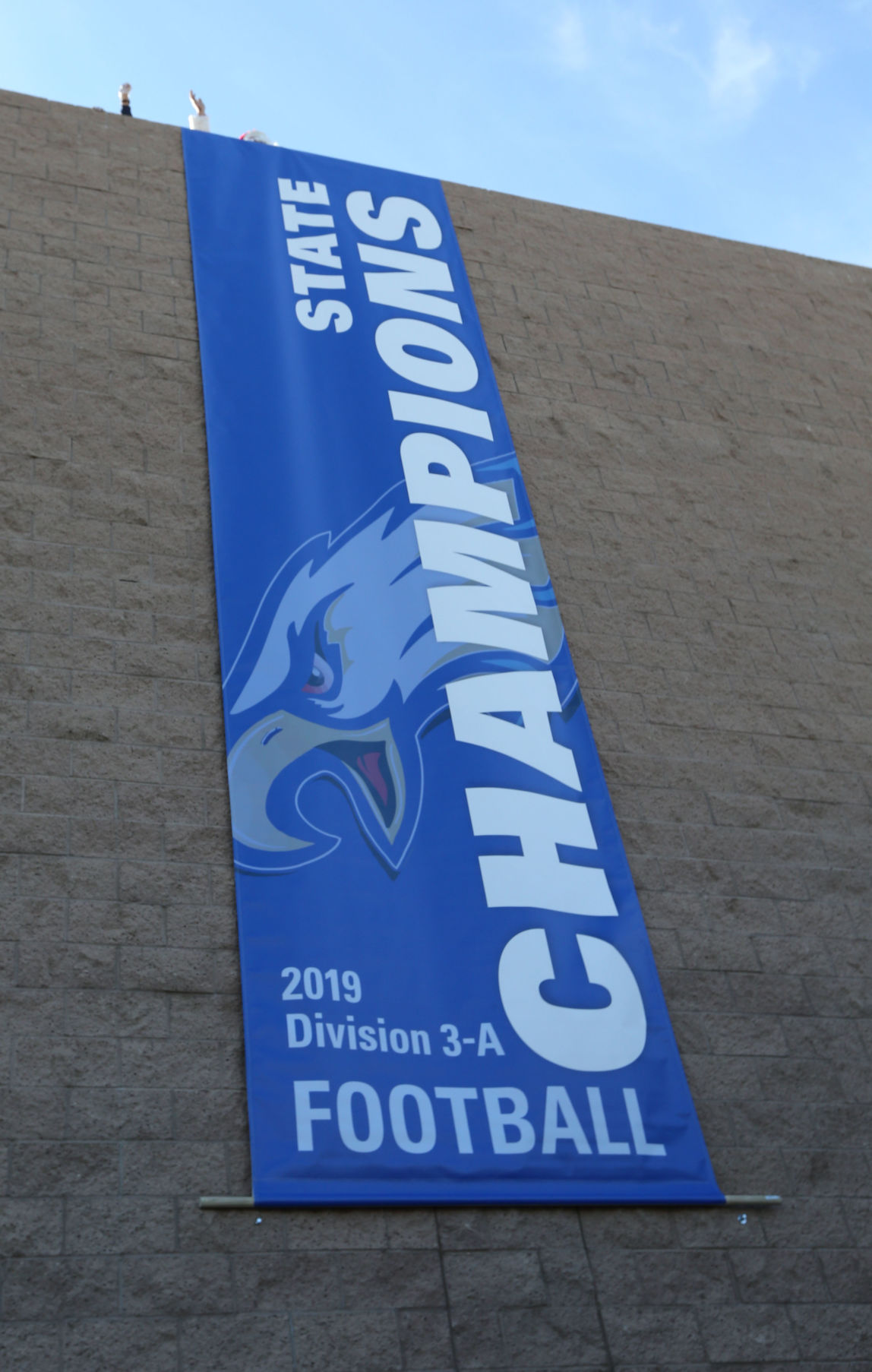 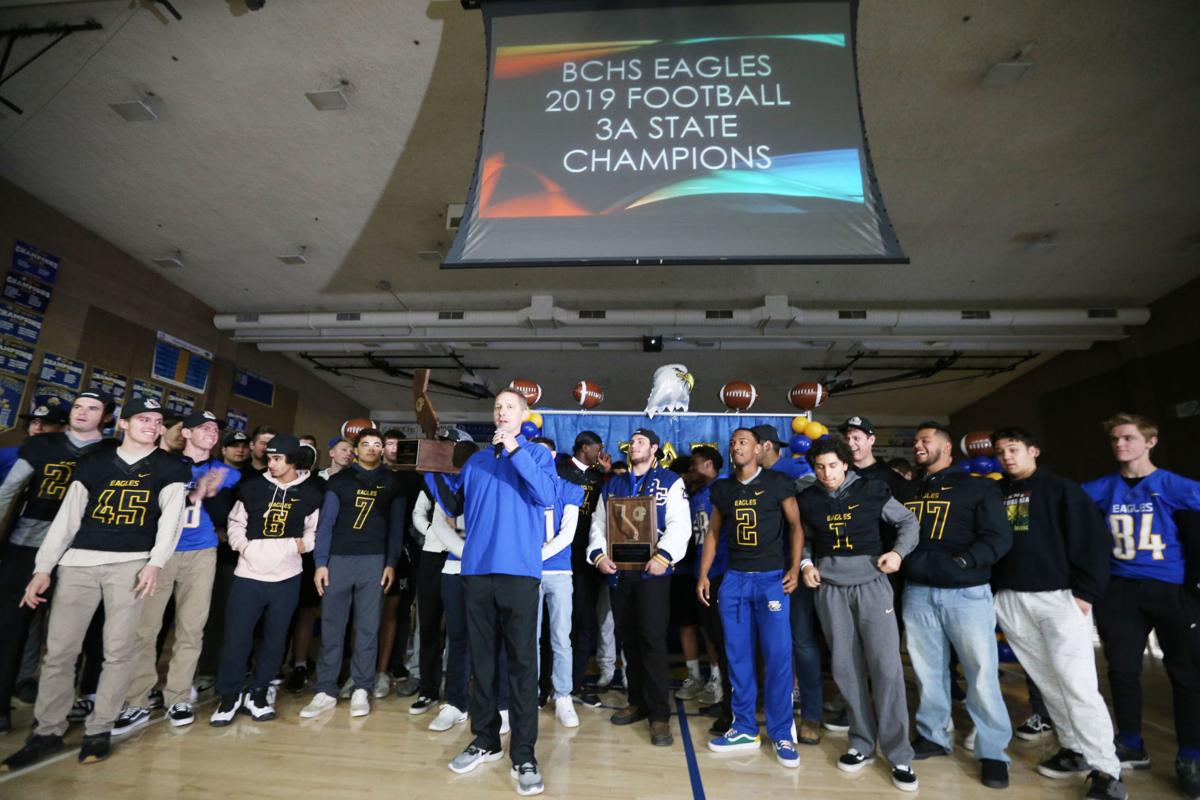 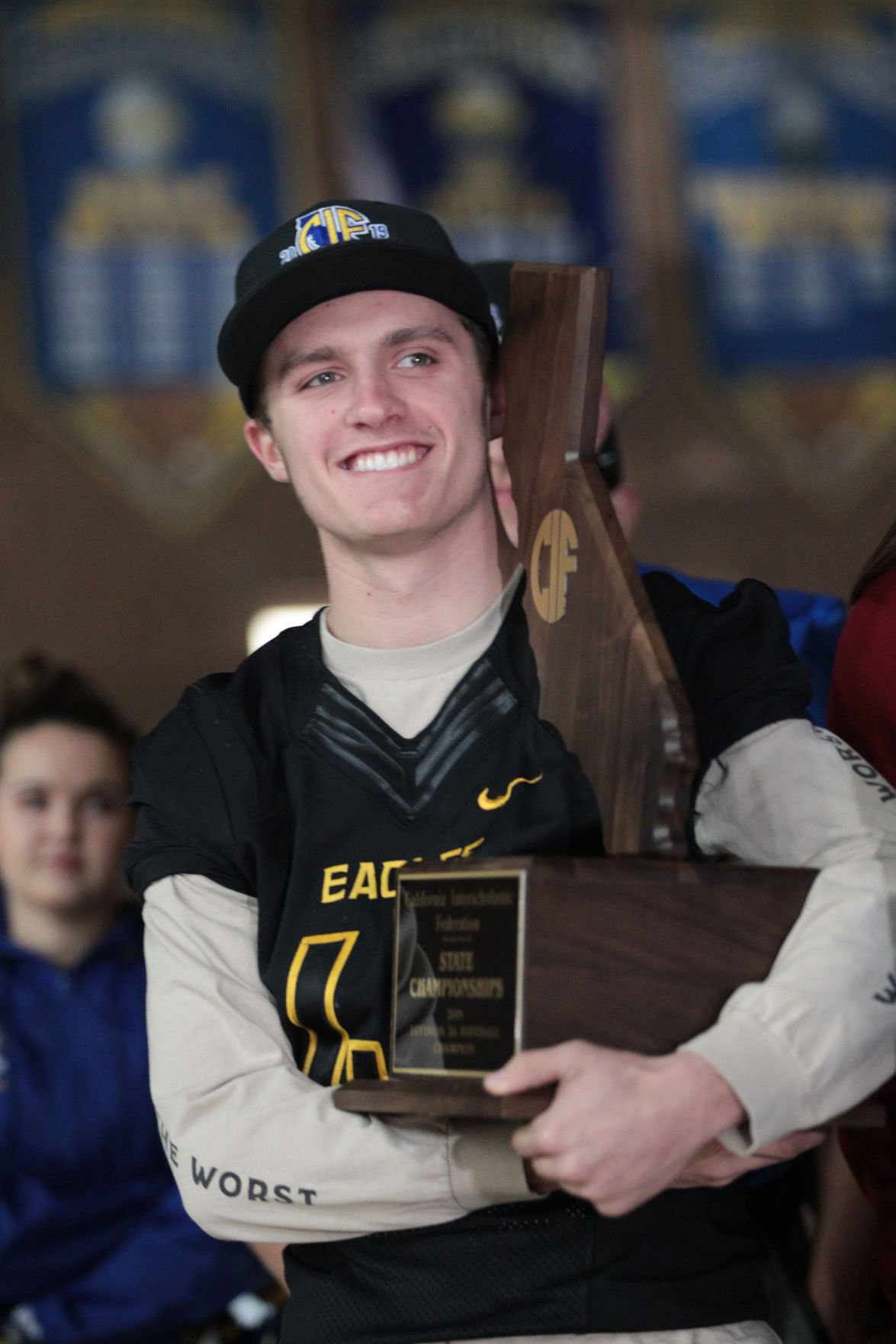 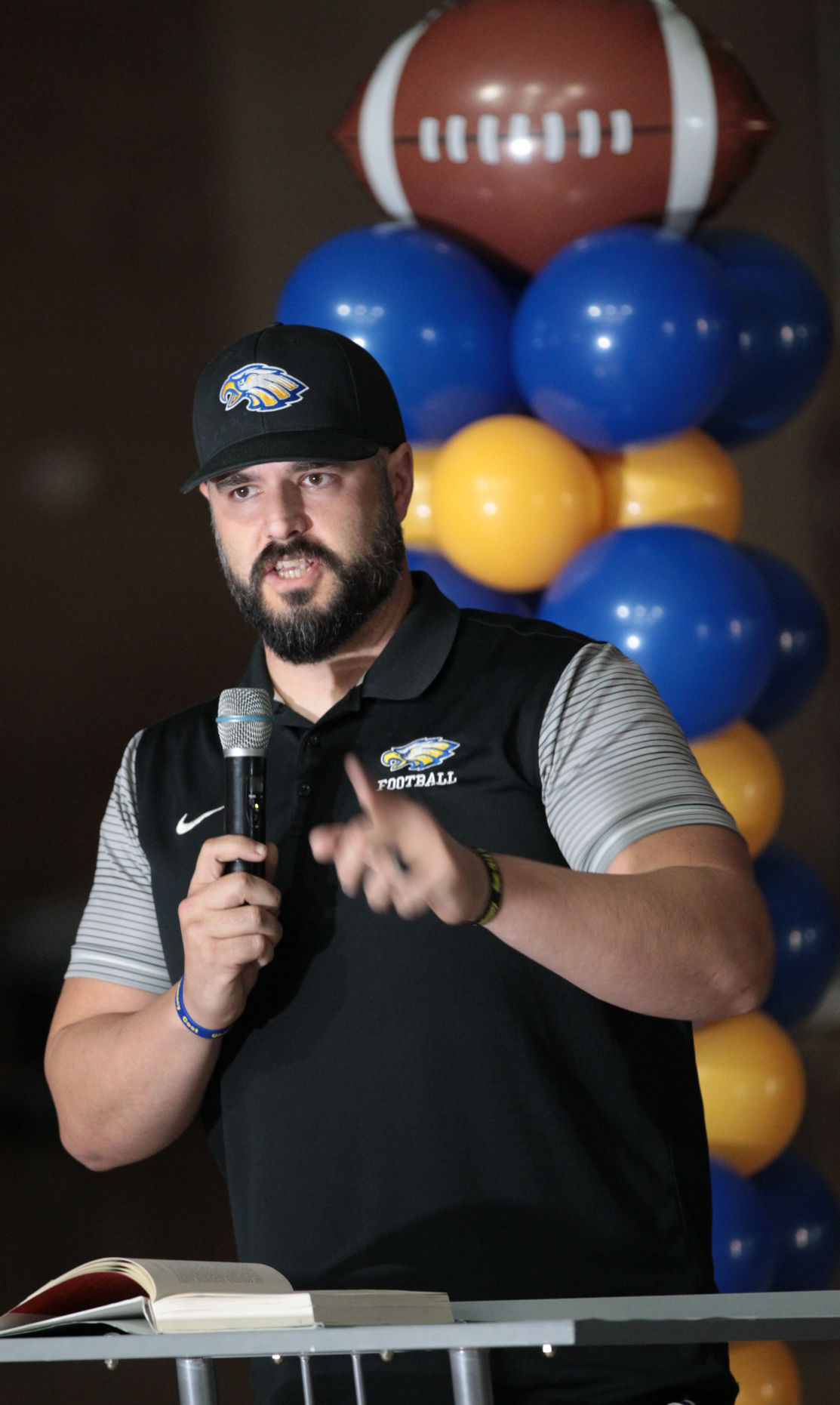 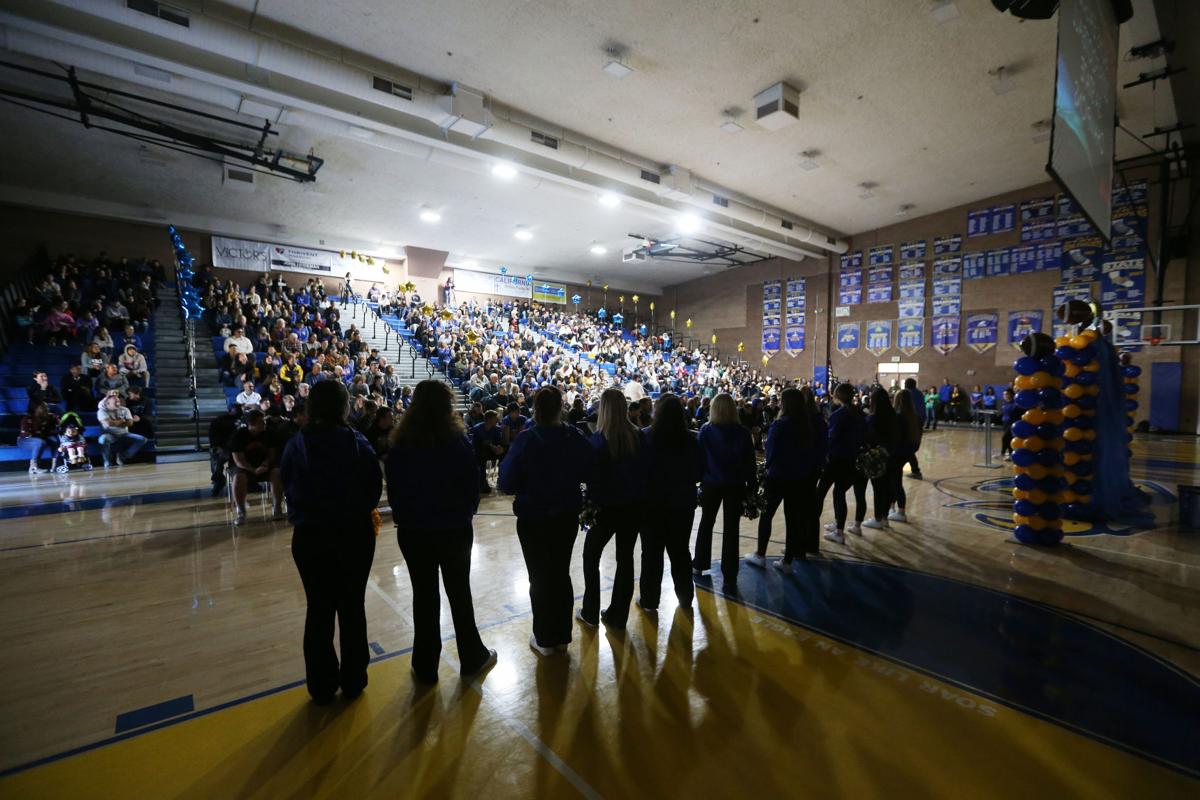 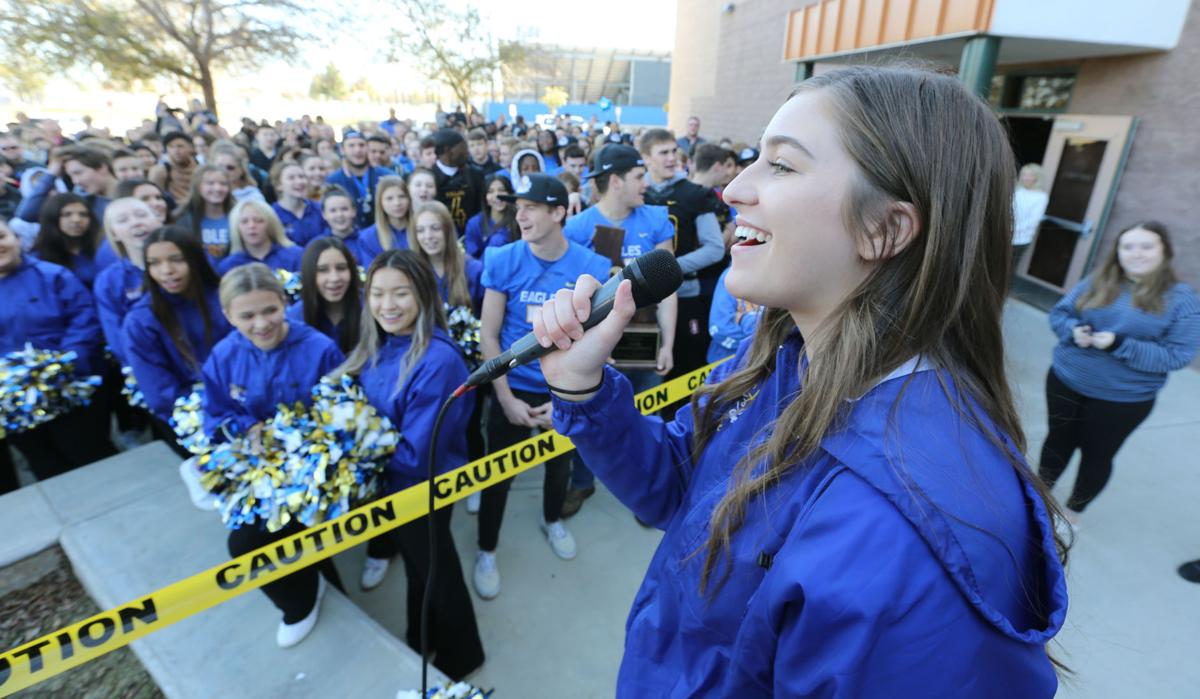 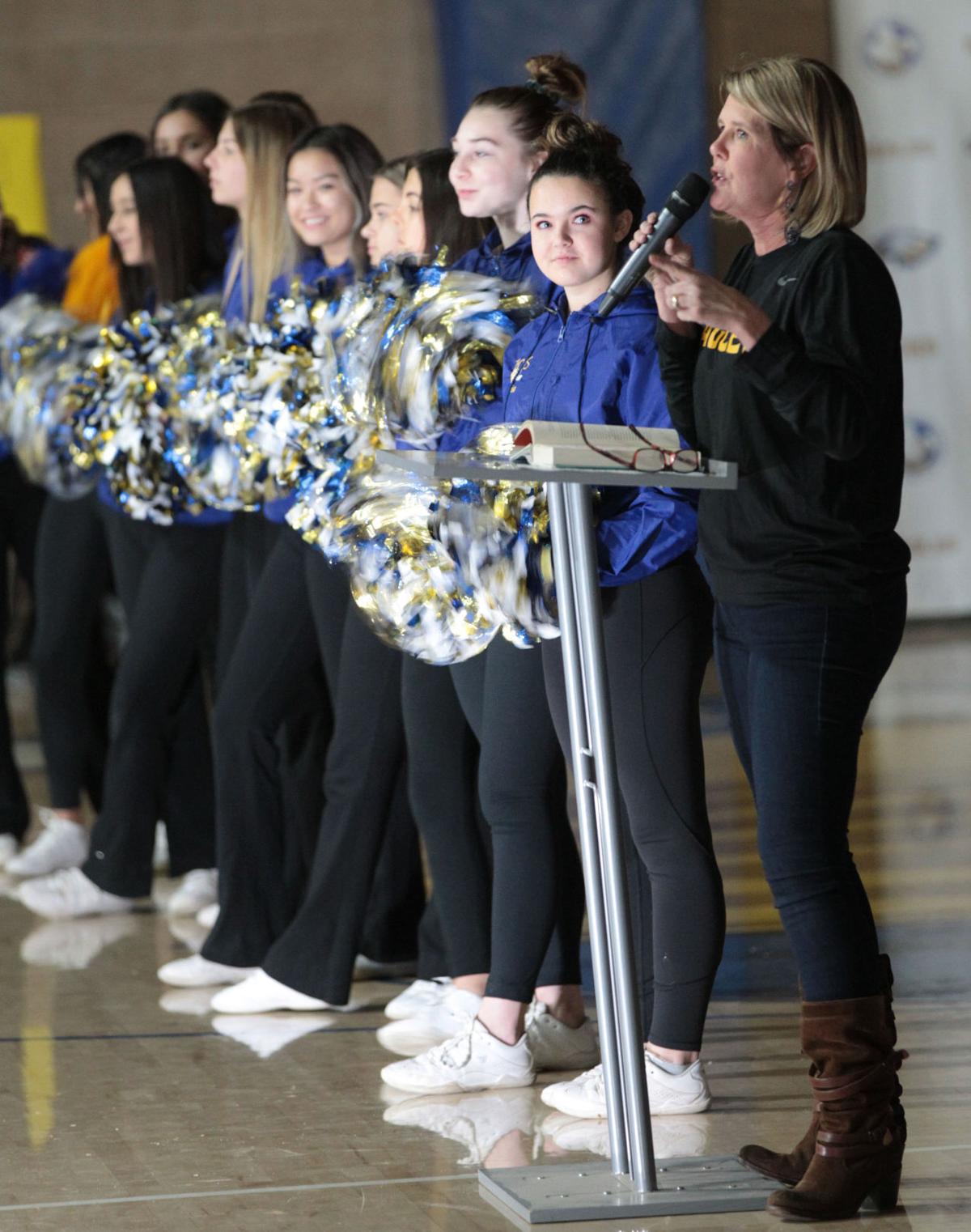 Bakersfield Christian High School quarterback Dominic Gamboni was one of several players who spoke Thursday during a community-wide celebration for the school's varsity football team, newly titled state champions for CIF Division 3-A.

The morning drive to work just got a whole lot better for Darren Carr.

Five days removed from leading the Bakersfield Christian football team to a CIF Division 3-A State Championship, Carr and the Eagles celebrated in style in a ceremony held at the BCHS Sports Center Thursday morning.

After the event, which featured a pair of highlight videos, a celebratory dance routine from senior defensive lineman David Steele and even a recorded message of congratulations from California Congressman and House Minority Leader Kevin McCarthy, players and coaches were told to head outside for a surprise.

When they arrived, they looked to the roof of the Sports Center to find a man in a Santa Claus suit, who after a countdown, unveiled a banner commemorating BCHS's state win, one that will hang from the building going forward.

Carr, who also teaches at BCHS, now has a visual reminder of the best season in school history every time he comes to work.

"I drive in right (in front of the Sports Center)," he said. "Anybody that comes up and wants to see our school and wants to be a part of it, they can look up and see that we actually did something here. It's going to be phenomenal."

A year ago, participating in such a celebration seemed like an impossibility for Ronnie Simril, who spent his junior year playing on a Golden Valley team that went 0-10, losing eight games by at least 29 points.

Initially feeling like he might not even want to play football his senior year, he found new life after transferring to BCHS, where he carved out a role as a starting wide receiver.

Simril ended his high school career on a high note in a 42-21 win over Rancho Cotate in the state title game, recording a game-high 159 receiving yards and scoring the final touchdown of the Eagles season on an 80-yard catch-and-run in the fourth quarter.

"Last year I had a really bad season," Simril said. "I was very down. And to come here and win a Valley and a State Championship is big. It was fun. I'm glad we got that big ol' banner up there."

Whether it was newcomers or four-year players who Carr estimates had just four total months off from football in their time at BCHS, coaches saw the celebration as the perfect way to cap a historic season, as the Eagles overcame a string of recent postseason disappointments to capture the ultimate prize.

“Anytime you work hard for something, it takes some time, it takes some pain," Carr said. "You know it’s worth it and in the end if guys keep their heads on straight, they work hard, they continue to do what they’re doing. And you know that days like this will happen.

"It’s not every year that you get to do it...but it sure is cool when it happens.”

Congratulations! What an accomplishment!