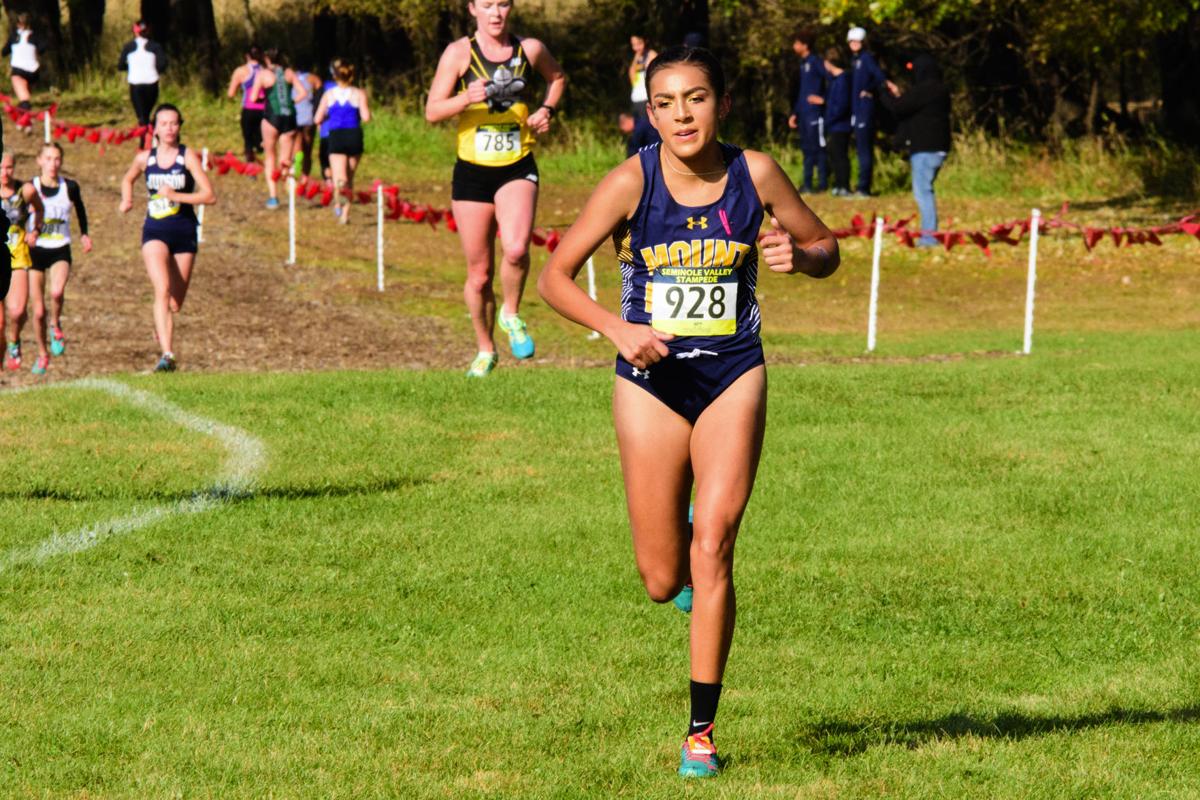 Vanessa Cortes has been a distance-running force in her time at Mount Mercy University. The Stockdale grad has won a total of six conference titles in cross country and track since the start of 2019. 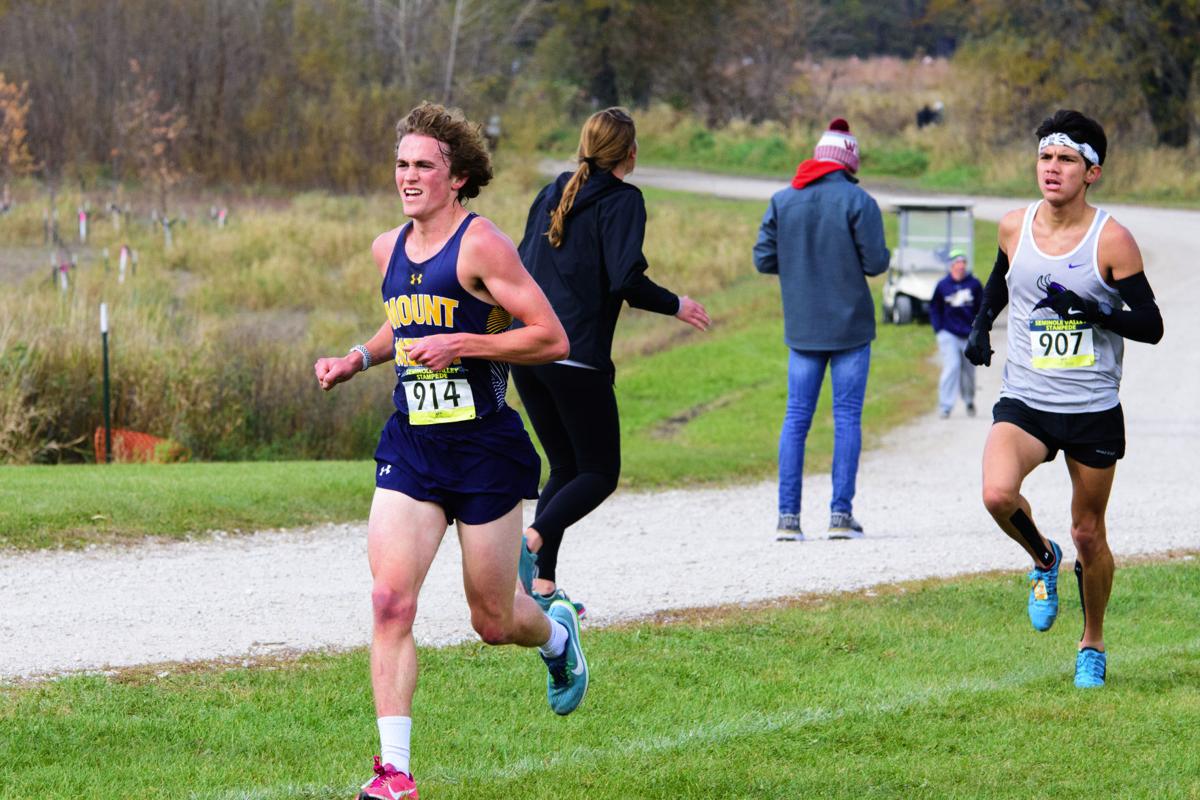 Jacob Blackmon pulls ahead of a competitor at the Seminole Valley Stampede in 2019. A senior at Mount Mercy (Iowa), the Stockdale grad won the school's Dale Harrison Student-Athlete of the Year Award in the spring.

Vanessa Cortes has been a distance-running force in her time at Mount Mercy University. The Stockdale grad has won a total of six conference titles in cross country and track since the start of 2019.

Jacob Blackmon pulls ahead of a competitor at the Seminole Valley Stampede in 2019. A senior at Mount Mercy (Iowa), the Stockdale grad won the school's Dale Harrison Student-Athlete of the Year Award in the spring.

Vanessa Cortes and Jacob Blackmon have carried on a Bakersfield tradition that's sprung up in a seemingly unexpected place.

Distance runners who graduated from Stockdale High School in 2016, Cortes and Blackmon made what some may consider to be an unusual choice when they committed to continue their athletic careers at Mount Mercy University, a small NAIA college in Cedar Rapids, Iowa.

But in reality, the school, more than 1,800 miles away from home, has seen a number of local runners thrive in recent years. The trend began in 2013, when then-cross country coach Ryan Scheckel successfully recruited Bakersfield High School runner Evan Bowman.

Bowman became the first of six local runners to commit to Mount Mercy in the last seven years, with several having great success. Centennial graduate Molly Pruett was a four-time National Tournament qualifier in cross country from 2014-17, while Garces grad Kathryn Vander Poel is a former track and field All-American in the 800-meter run.

Eager to "get out of Bakersfield for a bit to see some new places," Blackmon convinced friends and classmates Cortes and Madyson Roth to take a campus visit with him, and in a short time, all three committed to Mount Mercy, quickly getting on board with the change of scenery.

"We just wanted to get out of our comfort zone and see if we liked it," Cortes said. "We found out pretty quickly we wouldn't regret it.'

There were, however, some growing pains along the way.

Having grown accustomed to Bakersfield's "three seasons of summer," Blackmon was initially unprepared for snowy Iowa winters, where "even 40 degrees will feel like the best weather ever." Even the heat in Iowa played differently, as relentless humidity forced the group to train with "bugs biting you all over."

Luckily, Cortes says she, Blackmon and Roth had a strong support system in place, and were able to lean on each other while navigating the climate change.

"I don't think I would have been able to make it that first year without them," she said. "They understood everything, especially when it came to training. We were all acclimating to everything. It’s been pretty awesome being with them the last four years.”

Success helped make the experience all the more awesome.

Cortes has been on a tear since the start of the 2019 track season, winning two 5,000-meter titles and a 3,000-meter title at the Heart of America Conference Indoor Championships.

She also captured conference titles in the 5,000 and 10,000 at the 2019 Outdoor Championships and placed third in the 10,000 at the NAIA National Race. Her national time of 3 hours, 10 minutes and 51 seconds broke the school record by almost 10 minutes.

She followed that up by running a 19:25 at the Heart of America Cross Country Championships in the fall, taking first place by nearly 18 seconds to help the Mustangs win a team title.

This showing led to her being named Midwest Region Female Athlete of the Year by the United States Track and Field and Cross Country Association.

"It was honestly a shocker to get it, but I was so honored to be able to represent our school in that way," she said of the award.

Blackmon's seen his share of individual success as well.

After a disappointing 52nd-place finish at the cross country conference race in 2018, he shaved more than three minutes off his time this fall, qualifying for nationals with a seventh-place run of 26:37. Blackmon credits an overhaul of his training methods for his improved showing.

Like Cortes, Blackmon earned team MVP honors. He was also a winner of Dale Harrison Student-Athlete of the Year, given to athletes who found success in their sport while maintaining at least a 3.5 GPA.

Though they'll both take part in Mount Mercy's virtual graduation ceremony Sunday, Cortes and Blackmon don't appear to be finished competing for the school just yet.

While their cross country eligibility is used up, both parties can return to the track team next year. Each was granted an additional year of eligibility after the coronavirus canceled the final two months of their senior seasons.

Blackmon, who's currently back in Bakersfield, and Cortes, who's residing in Chicago, are both expecting to return to school to earn master's degrees in business administration.

"That's not how I wanted my senior year to end," said Blackmon, who finished eighth in both the 3,000 and 5,000 at the track indoor conference race in February. "Now I have a whole other year to get better, to improve and it's pretty exciting to think of how much better I can get."

Cortes' opponents likely aren't thrilled that she too has an opportunity to get better. And with numerous titles to defend, she's excited to once again be surrounded by familiar faces in a once-unfamiliar setting she's now happy to call home.

"It's pretty exciting to know I'm not in this alone," Cortes said. "That's the best part."