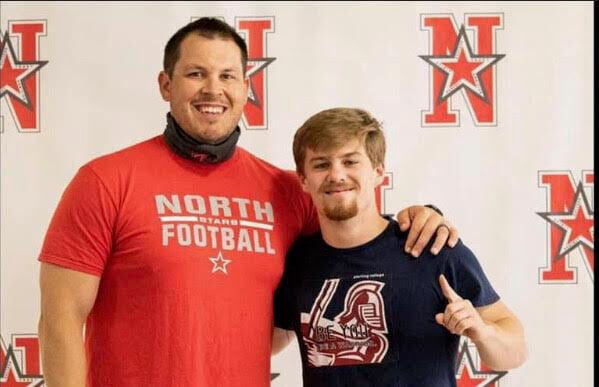 Andrew Clayton (right) poses with North High football coach Richie Bolin. Bolin, who committed to New Mexico State out of North in 2005, was the last Star to sign with a four-year school out of high school until Clayton signed with Sterling College in Kansas on May 21.

A belief that he could play college football has been embedded in Andrew Clayton's head for some time.

Recalling his days as a bruising middle school running back, Clayton vividly remembers an eighth-grade season where "I had like, 20 touchdowns and over 2,000 yards, and that's when I kind of realized that maybe I could play at the next level."

But as he began his prep career at North High, the odds of doing so appeared to be stacked against him.

While several Stars alums had gone on to play at four-year schools as junior college transfers, the school's football program hadn't had a player commit to a four-year college directly out of high school since 2005, when Richie Bolin signed a National Letter of Intent with New Mexico State.

But even if recent history wasn't on his side, Clayton says he always felt well-equipped to be the one to bring that dry spell to an end.

"I always heard you had to be at (Bakersfield High) or Liberty to get an offer," he said. "I never really believed that. I believed that if I'm good enough, they'll find me."

After months of discussion, Clayton found his home on May 21, when he signed a National Letter of Intent with Sterling College, an NAIA school in Sterling, Kan.

Expected to be used in a slot back role, Clayton says Sterling coaches have already started to carve out a role for him in their offense, planning to utilize him in a series of buck sweeps and outside zone runs.

Already feeling like it was a good schematic fit, Clayton says the early interest Sterling showed in him only intensified his desire to be there.

"They took a chance on me when no one else did and that meant a lot," he said. "They were the first."

One advantage Clayton had over other recent prospects from North is the guidance of a coach who's been in his position.

Bolin, the last North player to sign an NLI out of high school, took over as the Stars' head coach in 2019, and his experience proved to be of multi-faceted value throughout Clayton's recruitment.

Trying to make him as prepared as possible, Bolin gave Clayton a list of questions to ask coaches, ranging from "Where is the nearest airport?" to "What are your expectations for me size-wise when I show up in the summer?"

Most importantly, he told him to be sure to keep a high-level of competitive fire at all times, saying things are going to get very intense very quickly when he steps on campus.

"I want to make sure our kids get as much information up front as they can, because once you decide to make that decision, you're there," Bolin said. "They love you and they can't wait to get you, but once you're there, the honeymoon's over."

Bolin, however, is confident that Clayton is prepared to handle the workload.

And in the same way he was able to help his player navigate the challenges of recruiting, Bolin believes Clayton will have a unique perspective to offer North's current group of underclassmen who hope to follow in his footsteps.

"It shows a lot of our current kids (they can do it)," Bolin said. "It kind of showed kids on campus (playing in college) is possible if that's something you want to do."

For his part, Clayton says he's thrilled to be seen as a mentor to the players coming through after him.

"It's the best feeling to know that I'm showing the younger guys on the team that it's possible to do it from Oildale," he said. "It means the world to me."